Packing in the Bundesliga – Data Analysis

This piece has been written thanks to the generosity of Impect who were kind enough to provide packing data for the Bundesliga.

In the recent past, we saw pass completion held up as an indicator of performance on the football field. A player with a high pass completion percentage was held up as an example of a good passer of the ball. While being able to complete a pass is, of course, an important trait for a player to have this does not take into account the quality or importance of that pass. In an isolated game, for example, we could have two central midfielders playing in similar roles as a part of the double pivot in a 4-2-3-1 structure. Player A could end the game with a +90% pass completion ratio while Player B  had a pass completion in the low 80% range. Basing our judgement purely on this statistic we can be sure then that Player A is the better passer of the ball, right? No, Player A spent the match receiving the ball from the central defenders and then playing either backwards to the defenders or goalkeeper or sideways to the second pivot or to the near side fullback. Player B, on the other hand, was more progressive with his passing he received the ball and displayed a tendency to look forwards for opportunities to progress the ball through the thirds. His passes travelled towards the final third and broke the lines of the opposition defensive structure.

So, which of these players added more value to their team? Player A kept possession but did nothing with it while Player B gave the ball away more but created far more opportunities for his team to score a goal, by progressing the ball towards the opposition goal. Since we know that the end goal in a football match is to win by scoring more goals than your opponent we can, therefore, be confident in stating that Player B added more value to his team than Player B, despite a lower pass completion percentage.

This entire thought process led to the creation of a company in Germany called Impect. This company was created on the premise that the data used to assess and evaluate football players was geared unfairly towards attacking players who scored or assisted or midfield players who played safe rather than progressively. They, therefore, created a new metric known as packing. The premise behind packing is simple but incredibly effective. A player receives a point for every opposition player that their pass or dribble bypasses. 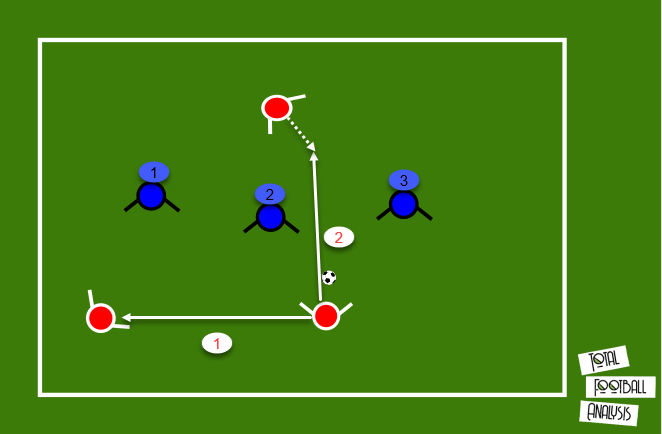 Take the example above. If the player in possession of the ball plays the ball along the patch marked as 1 then they receive no packing points because no opposition players were bypassed. If they take the path marked as 2, however, then they gain three packing points because the pass bypasses three opposition players and breaks the line of the opponent.

The beauty of packing, however, is that it does not purely take into account the ability of the player passing the ball. As pass, of course, needs two players to be completed. The player passing the ball and the player receiving the ball. A separate score within the packing data then gives a point to the receiving player for each player that the pass bypasses. So, back to our example above both the passer and the receiver are given a score of 3 for the action shown. The passer is given +3 for opposition bypassed and the receiving player receives +3 for the opposition bypassed received.

This takes into account the importance of players in advanced positions being able to identify and occupy spaces between the lines of the opposition. A progressive pass that gains a high packing score is less likely to be effective if the ball is played into a contested area and it not completed.

One of the most prominent examples of this in football today is that of Roberto Firmino at Liverpool. It is widely known that Firmino is a player who tends to drop off the front line to occupy the ‘10’ space. This, of course, allows the likes of Sadio Mane and Mohamed Salah to move inside to the central space that has been vacated by Firmino dropping deep. There is, however, a separate function for this movement by the Brazilian international. This movement allows Liverpool to occupy the key space between the defensive and midfield lines of the opposition and the ball can, therefore, be played into this space and from here Liverpool have an advanced platform from which they can attack. 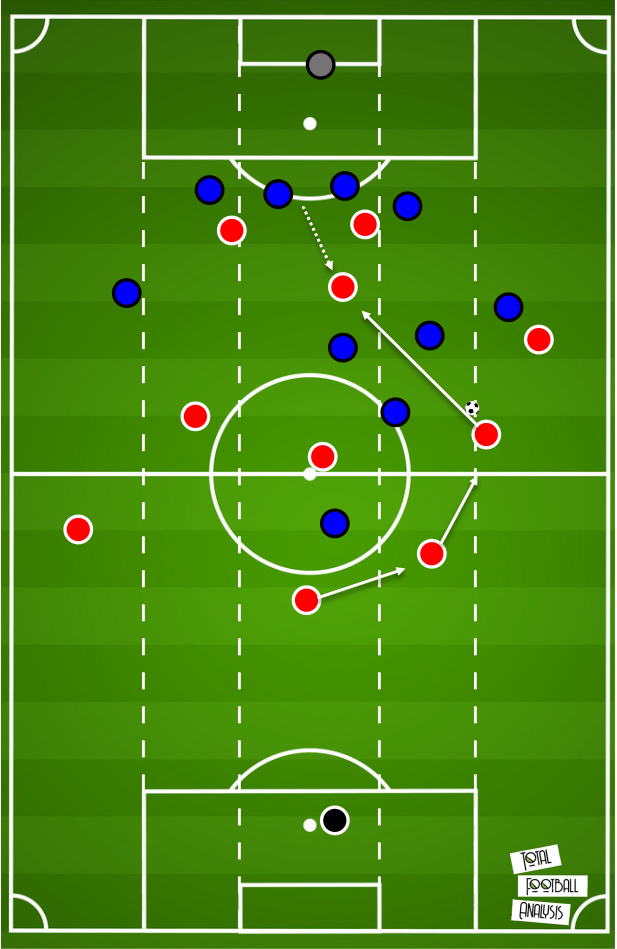 We see an example of this here as Liverpool built-up through the thirds of the field. The first pass is given a packing score of 0 as no opposition players are bypassed. The second pass in the chain is given a score of 1 and now we see the importance of movement in advanced areas. We see that Roberto Firmino has made the move back towards the ball and he is occupying space. The player now in possession, Trent Alexander-Arnold, is then able to find a passing lane to the feet of the Brazilian. That pass carries a score of 5 for both the passer and the receiver.

Immediately we see the correlation between the packing score and the value of a pass. Each pass in that chain had intent and added value, to an extent, but the key pass was the one that progressed the ball to the final third and into a central position.

How though does this translate into data at the professional level? Thanks to the kindness of Impect we have been given access to the packing data from the German Bundesliga so far this season. We have split this into position groups so that the data can be presented and analysed in a more logical way. This data analysis will break this concept down for you. 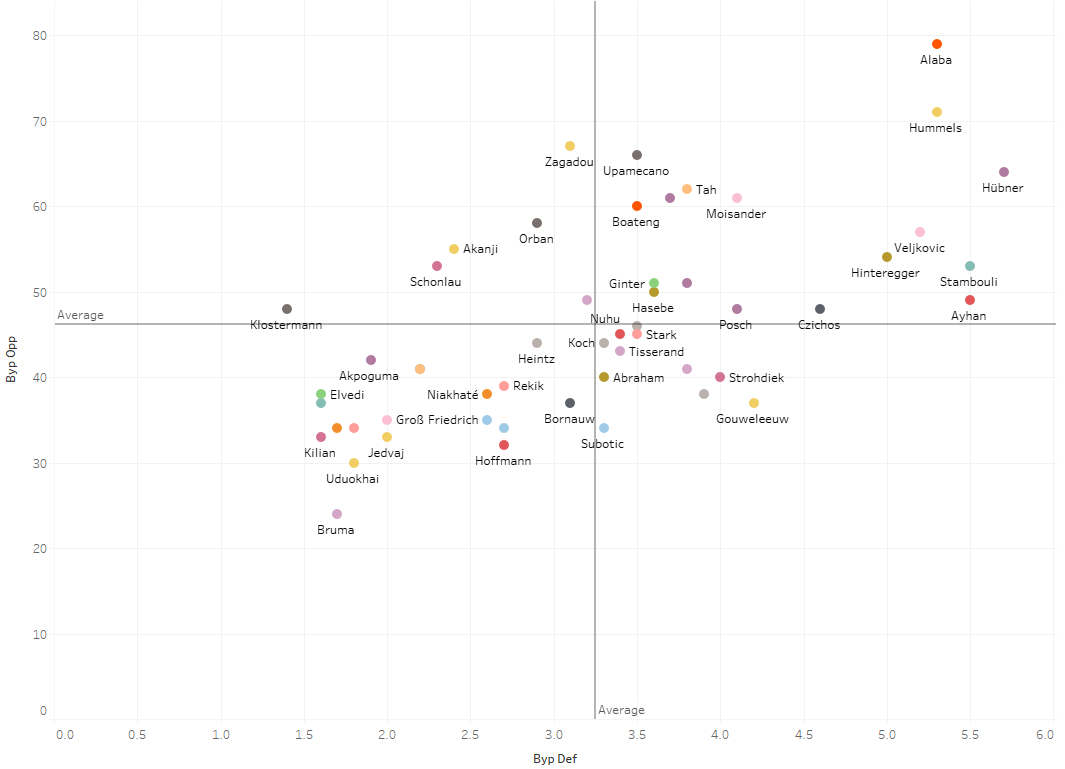 This chart is very simple as it shows the volume of passes that each player plays which bypasses an opposition player and compares this to the number of passes that bypass five players that are closest to the opposition goal.

This data, of course, is also affected by the style of play of each team. It is normal for the likes of Bayern and Dortmund to have a lot of possession of the ball and therefore we would expect them to have players with strong packing numbers. It can be interesting to consider how these team styles vary across the Bundesliga. 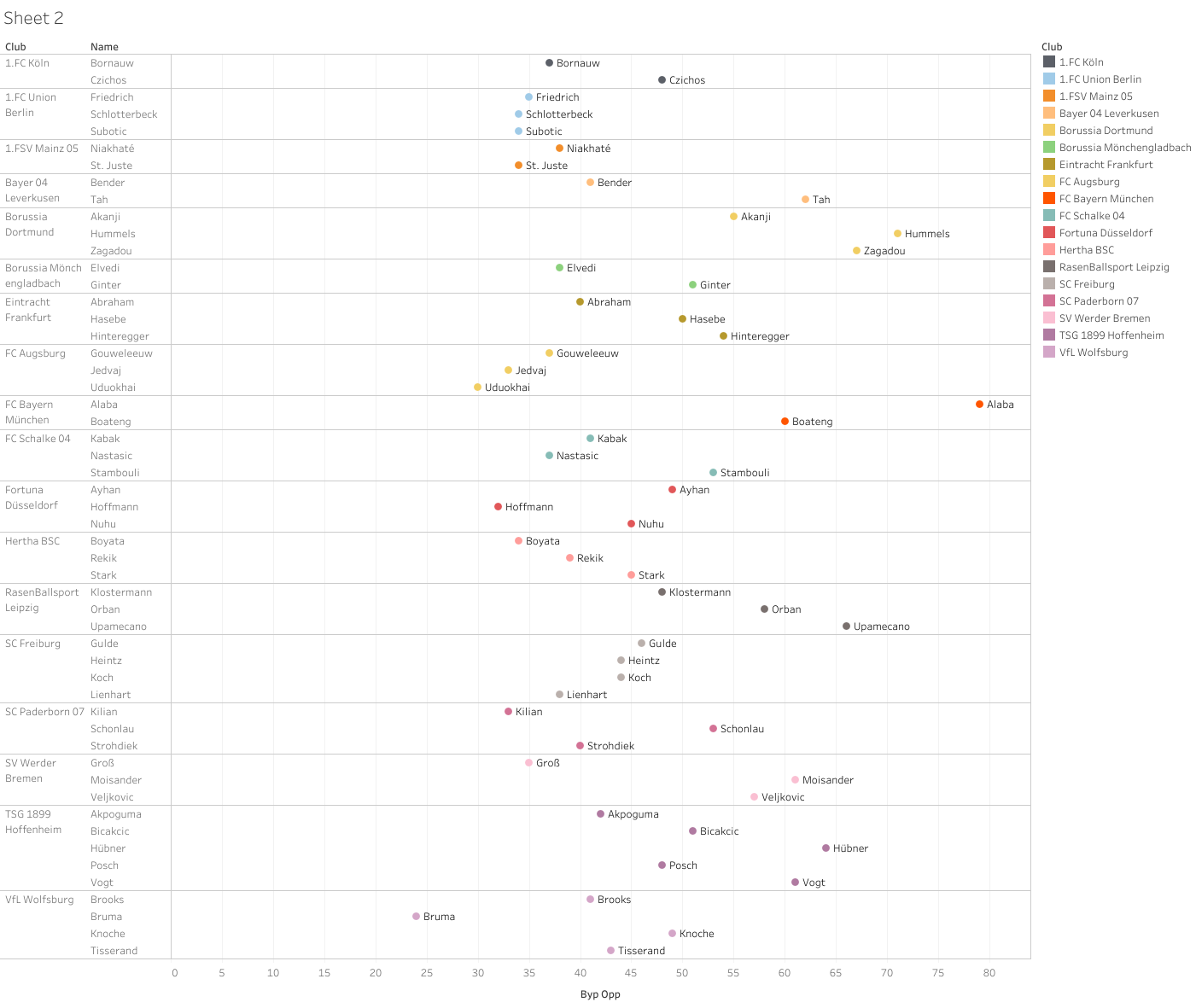 Here we see each player in the above chart grouped in their teams. This gives us an insight into which central defenders are the most active in progressing the ball for their sides. We, of course, see Bayern and Dortmund as prevalent but there are also interesting differences. Take Leverkusen for example where Jonathan Tah progresses the ball well but Bender is less progressive. Union Berlin are on the opposite end of the scale to Bayern and it is clear that they do not progress through their central defenders at all.

This kind of information can be extremely interesting in terms of opposition analysis and planning for the next match. We very quickly see which players to target when in possession for each side. 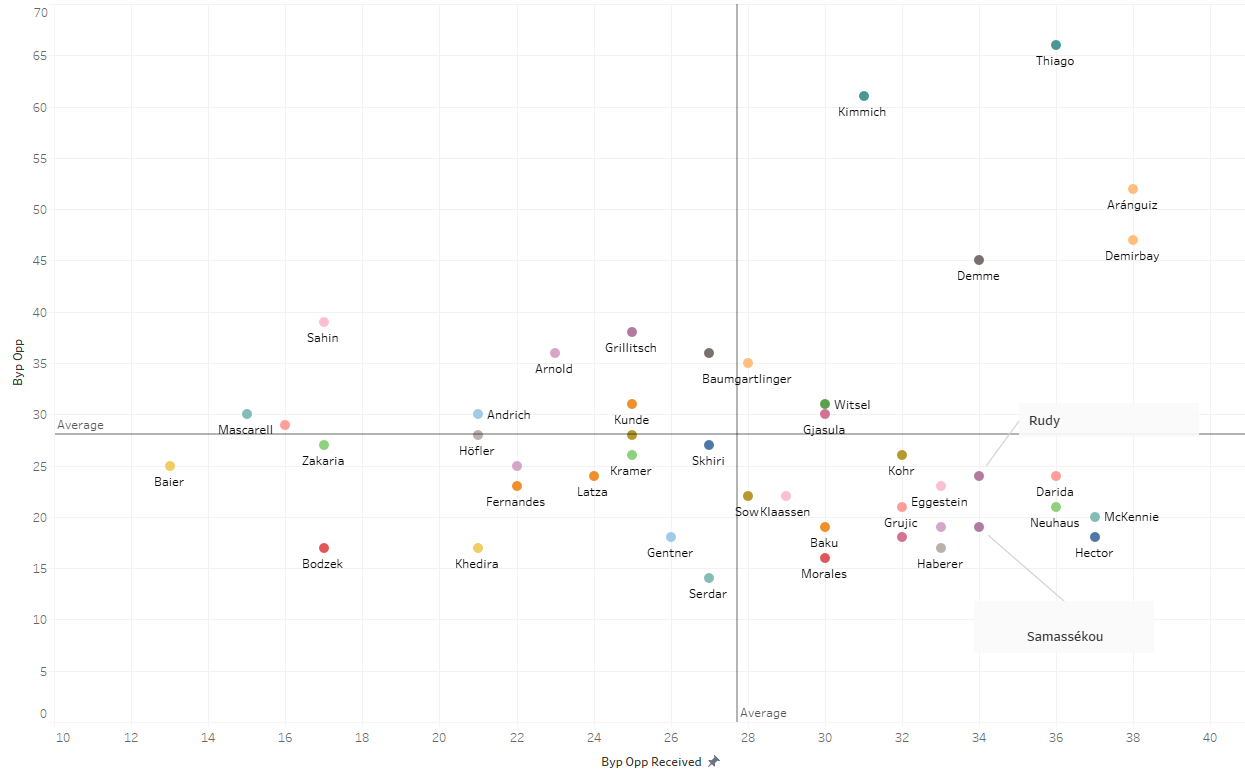 Now let’s look at central midfielders. This chart looks at the number of players bypassed by each pass but this time compares it to each player and their received passes in terms of how many passes those bypassed. Again, it passes the eye test very quickly with Thiago and Joshua Kimmich of Bayern Munich featuring prominently. Interestingly Charles Aranguiz of Bayer Leverkusen is also featured and a matter of weeks ago it looked as though Bayern were close to finalising a deal to sign the Chilean international. 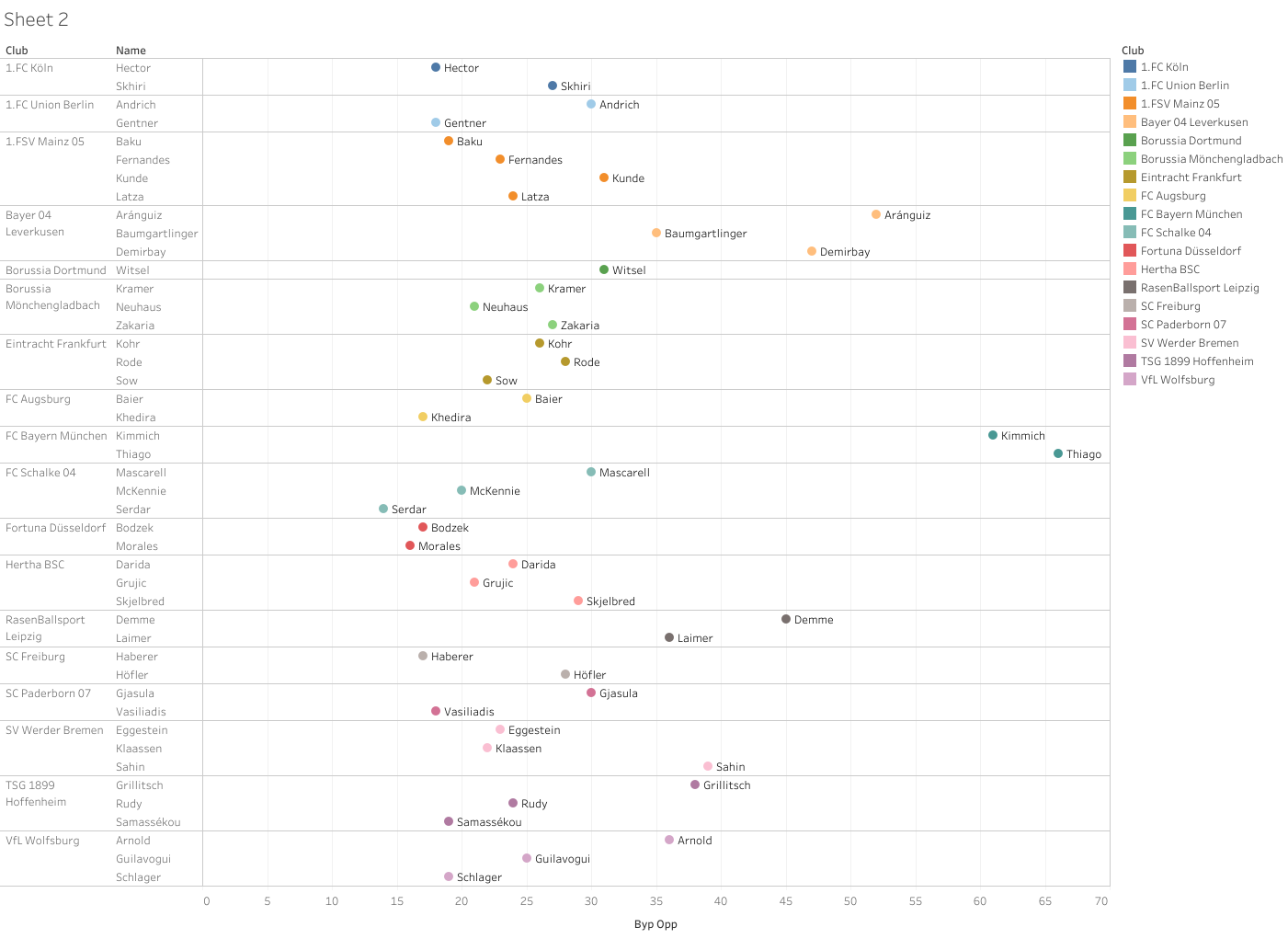 Again, we can use this data to identify team style as the ball passes through the midfield. Once again the key outliers are Bayern Munich with Thiago and Kimmich both excelling in terms of the number of players bypassed per 90. Interestingly, while Dortmund progressed actively through their central defenders they are less active in the midfield band with Axel Witsel showing only average numbers.

Once again we can see that this is an important tool for gauging the danger of the opposition. Being able to identify which player is likely to progress the ball efficiently will tell you who to close down aggressively while other players may be allowed space on the ball as they are not progressive passes. 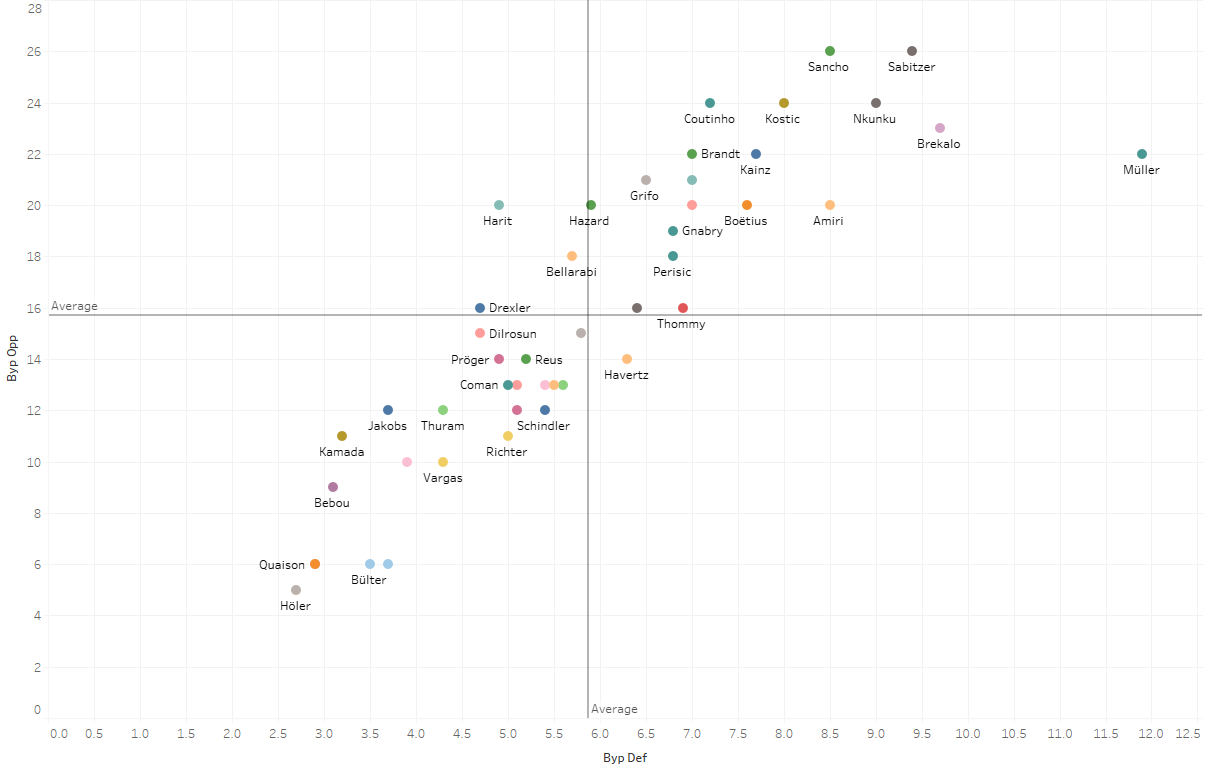 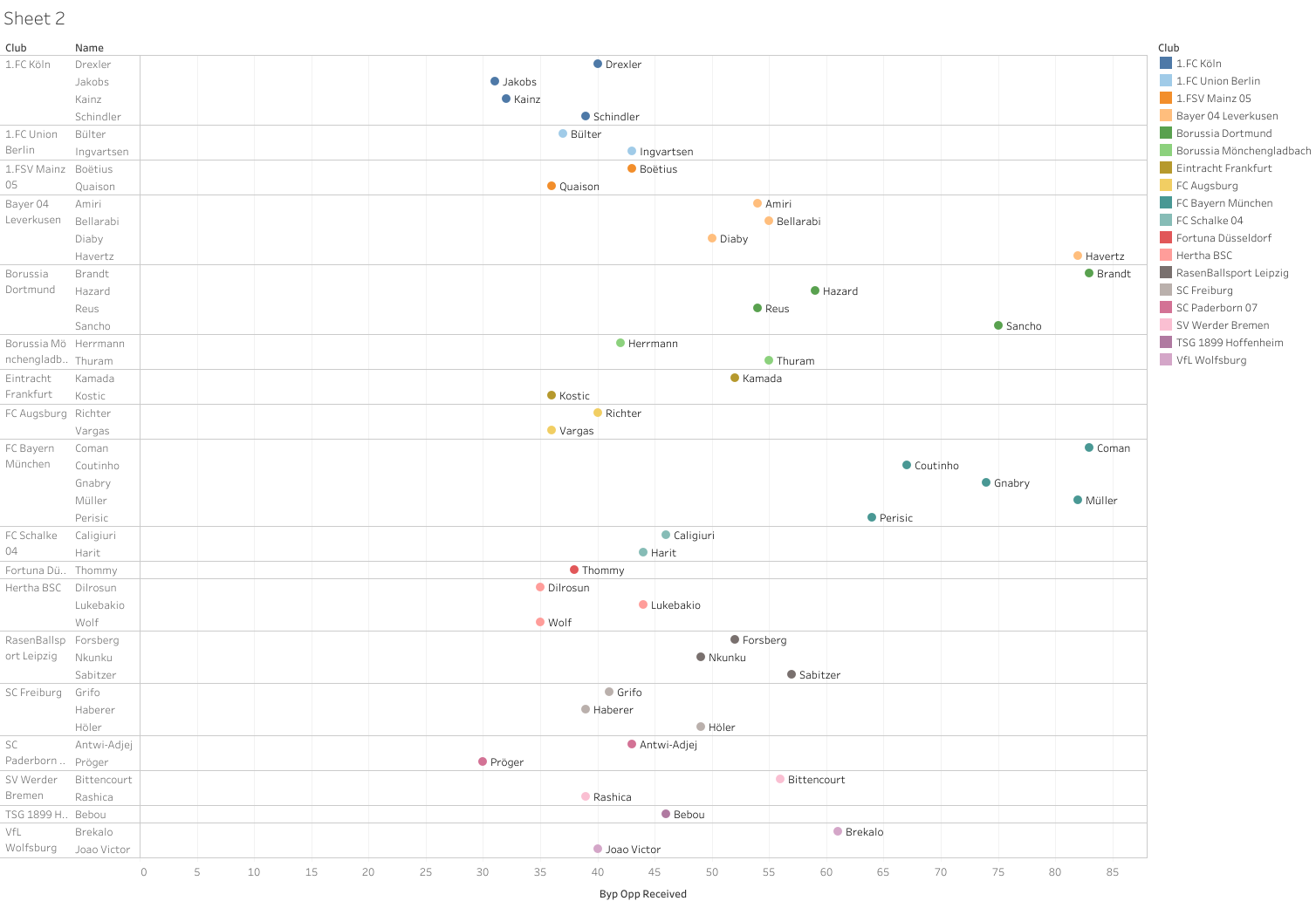 Something a little different this time as we change the focus in terms of team style. This time we are looking at which attacking midfielder receive the ball from progressive passes that break the lines of the opposition. Again, Bayern Munich clearly stands out with five players that are above average in this metric and Thomas Muller and Kingsley Coman are at the top of the chart. They are joined, however, by two young players who are very highly thought of in Julian Brand and Kai Havertz. Both profile differently in terms of their movement patterns and the positions on the pitch that they occupy but both also have an innate ability to drift into pockets of space in dangerous areas before receiving the ball and being able to threaten the opposition penalty area.

This tool is again useful for player and opposition analysis but can also provide significant value in recruitment terms of identifying undervalued players who play a role in helping their team to progress the ball.

The concept behind packing is a relatively simple one but it is extremely effective. As a tool, it can inform player development as we look to teach young players the importance of passing in a progressive manner to add value for our team. It can help our analysis of opposition and scouting reports of individual players as we identify which players pass and receive progressively that can either hurt us or add value as a recruitment target.