There were many sceptics surround Greuther Fürth’s chances in the 2. Bundesliga this season. A side which generally has a stable defensive set-up, excellent goalkeeping but only managed to finish a mediocre 13th. The clubs biggest issue was the production in the final third, which saw Fürth score a measly 37 goals. Only relegated Magdeburg managed to score fewer with 35. Fürth addressed the situation by signing ex-Sweden international Branimir Hrgota on a free from Bundesliga side Eintracht Frankfurt.

The 27-year-old who has been starved for first-team action has made a real impression in his first season with Fürth. Nine goals and four assists are the best offensive production at the club. This scout report and tactical analysis will look at what Hrgota has brought to the table for Fürth and examining how he fits into Stefan Leitl’s tactics.

Greuther Fürth is one of a couple of teams which regularly operates with a 4-3-1-2 formation. The reliance of high-pressing when Fürth is without possession in their attacking third is pivotal in the make-up of Leitl’s side. Hrgota plays up top as one of the two attackers alongside Daniel Keita-Ruel with Havard Nielsen playing in behind. Hrgota plays a critical role in counter-pressing, and when done effectively, Fürth can turnover possession and go on the attack. We look to explore Hrgota’s role in counter-pressing and zonal marking. 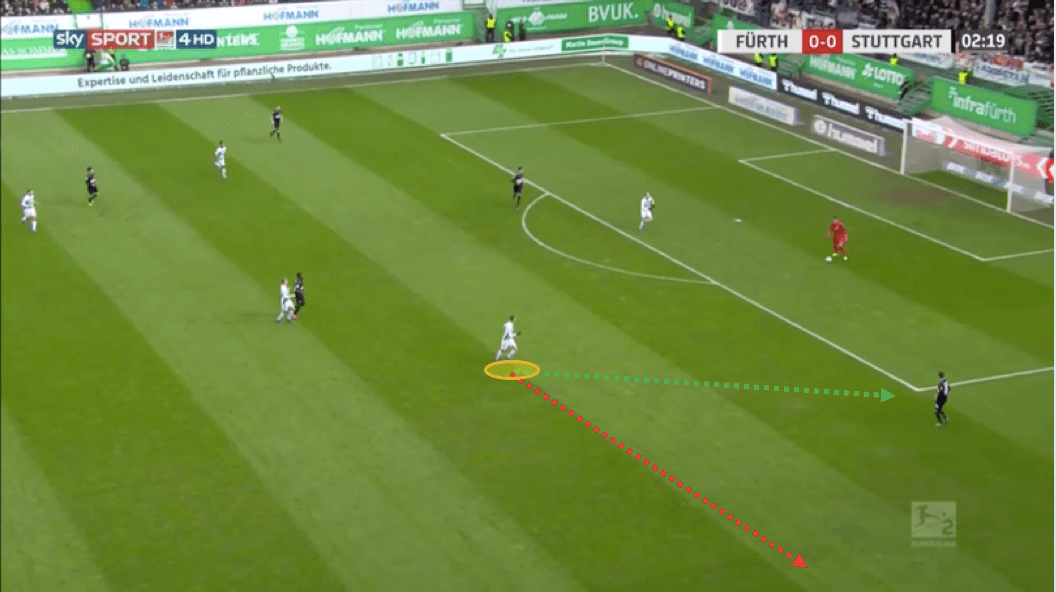 An example of when this tactic works came against Stuttgart, pressing and applying pressure to cause a turnover. In its application, Hrgota has to control his territory and his theoretical opponent, which in most cases is one of the centre-backs. This is null against teams which play three at the back; this would mean Hrgota marks the left centre-back if he plays as the right striker. As Gregor Kobel plays to former Borussia Dortmund player Pascal Stenzel, who is immediately corralled by Hrgota. With no clear avenue back to the keeper, Stenzel’s attempted clearance is picked off, and Fürth wins possession again. 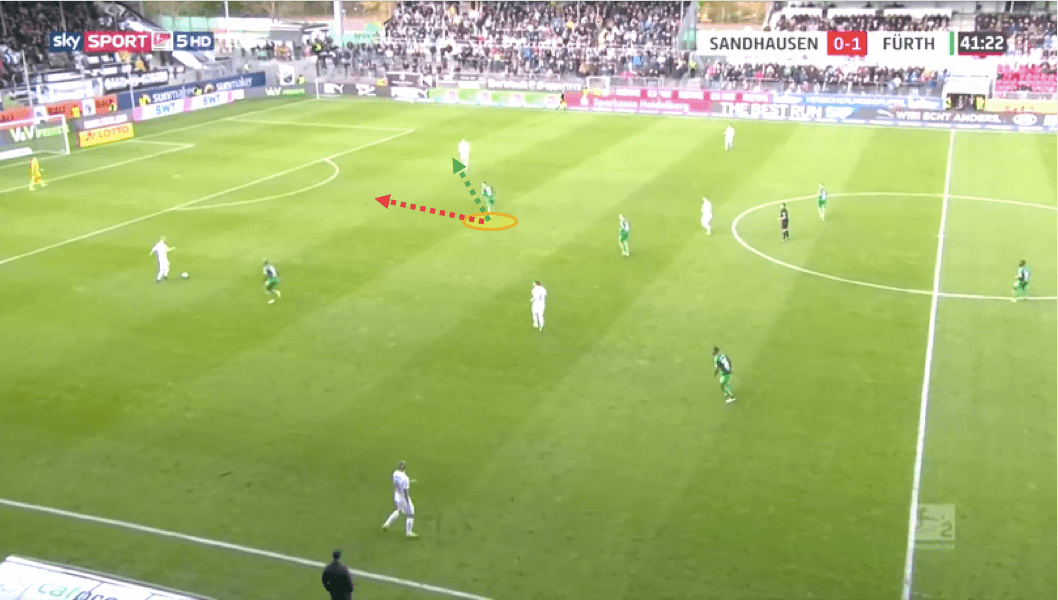 When this principle isn’t executed correctly, Fürth can get exposed down the flanks. The objective in most cases to ensure the switch isn’t viable from the initial press by the forward two. In this instance, Hrgota is in an excellent position, cutting off the direct avenue to the opposing centre-back. If the Sandhausen plays chances his luck, it would be almost inevitable that Hrgota intercepts possession. However, the break down comes from his partner Keita-Ruel who presses the incorrect angle allowing Sandhausen an exit.

Fürth’s counter-pressing starts at the top if neither in the top two can effectively slow down and hinder the opponents time on the ball they can easily be played through or around. Hrgota shows how useful he can be in the pressing game.

In transition, Fürth likes to play quickly with the use of short, combination passes which looks to exploit space and benefit off the ball running. For this to work, there is a reliance on one of the strikers to drop in and receive possession. This enables combination passing and creating the “triangle” of fluid movement. When this is used, Hrgota is vital as on many occasions; it will be his side of the pitch used. This section of the analysis looks at Hrgota and Fürth going forward, what the Swede’s input is and how it affects the team. 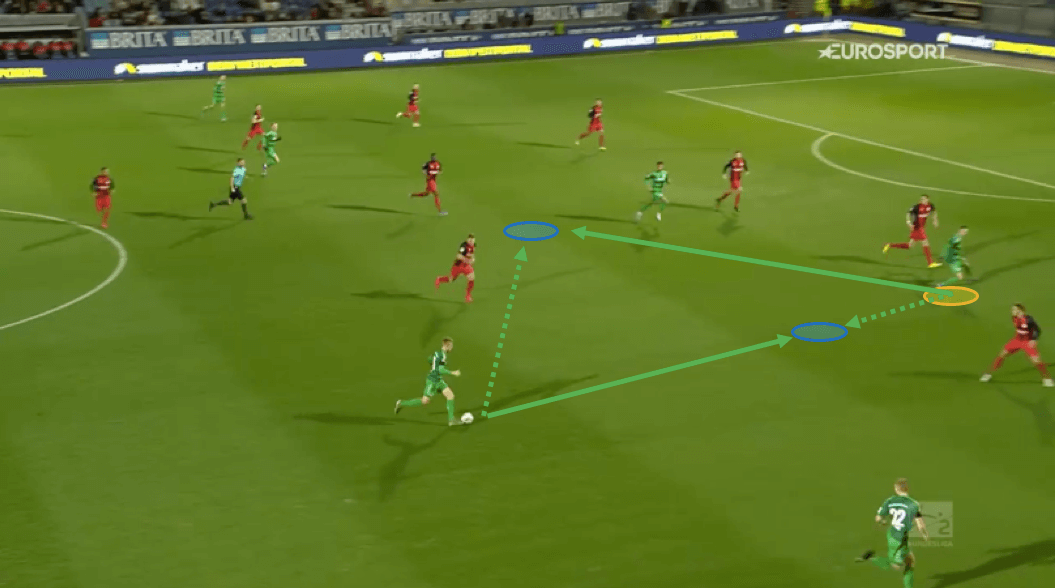 Our first example is exactly what Hrgota does – a lot of dropping between the lines to win possession before laying off the ball to a teammate. As Sebastian Ernst drives forward and no immediate space opening up, Hrgota drops off his initial diagonal run to provide an option. The hope is to draw Wiesbaden’s Manuel Schäffler towards Hrgota. As Hrgota wins the ball and Schäffler bites, Ernst can make the diagonal run and allow Fürth to make a switch entering the final third. The play is simple yet effective.

Those types of plays are quite common, and as the pass-map from that Wehen Wiesbaden game shows, Hrgota frequently operates between the second and attacking thirds. By dropping into those spaces, Hrgota is a far more dangerous prospect when he allows his teammates to be more involved going forward. 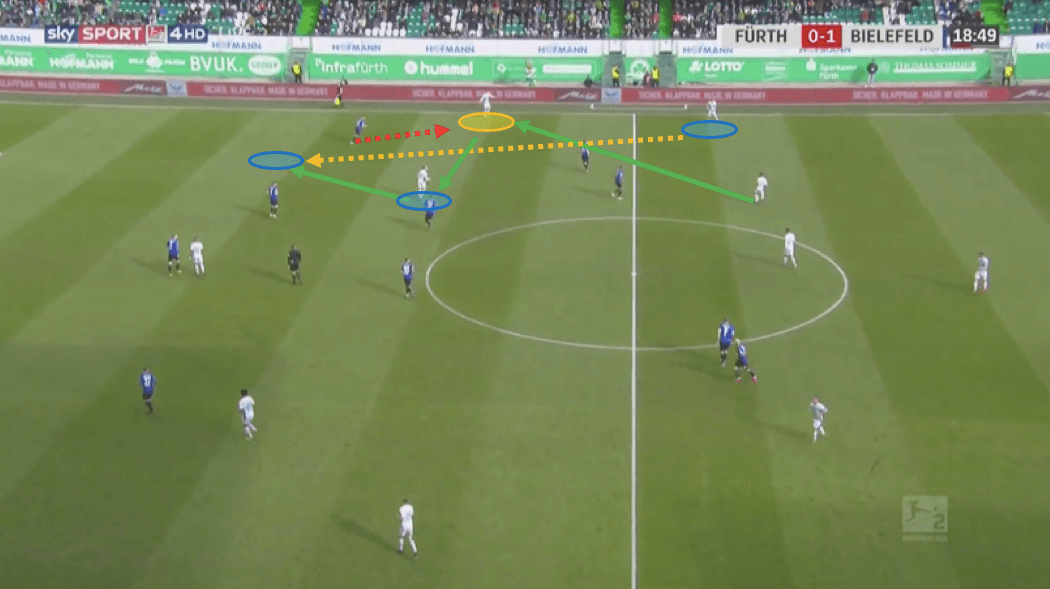 We also see this process when Hrgota is out wide, on the odd occasion when Leitl opts for a front three or a single striker with traditional wingers. In the game against Arminia Bielefeld, we see how the principles of the triangle and how he can draw players out position allows his teammates to exploit advantageous spaces behind the defence. As the ball comes in towards Hrgota, he is immediately tracked by Florian Hartherz. This opens up the area behind the left-back, the quick combination with Hrgota and Nielsen and the excellent off the ball run by right-back Maximilian Sauer enabling Fürth on the attack.

Hrgota is an essential link in the passing chains, by not playing as the last man he has a responsibility to ensure he makes the right passes to open the game up. When this works, Fürth are extremely dangerous in entering the final third.

Before joining Greuther Fürth, Hrgota had managed just 25 goals in 127 appearances for former Champions League side Borussia Mönchengladbach and Eintracht Frankfurt in all competitions. Hrgota made a name for himself in Gladbach’s 2014/15 Europa League campaign, netting eight goals in 10 appearances. Given five were scored during the qualification stage which included a hat-trick in the 10-3 aggregate win over FC Sarajevo. All told, Hrgota’s goal-scoring record is underwhelming.

Yet his debut season at Fürth has seen the Swede in career-best form, nine goals in 23 appearances averaging a goal every 1,761 minutes. As the shot chart above showcases, Hrgota has a high percentage of shots hitting the target (43.1%). He ranks ninth in shots taken at 58 with an average per 90 of 2.84. But how does Hrgota get his goals? 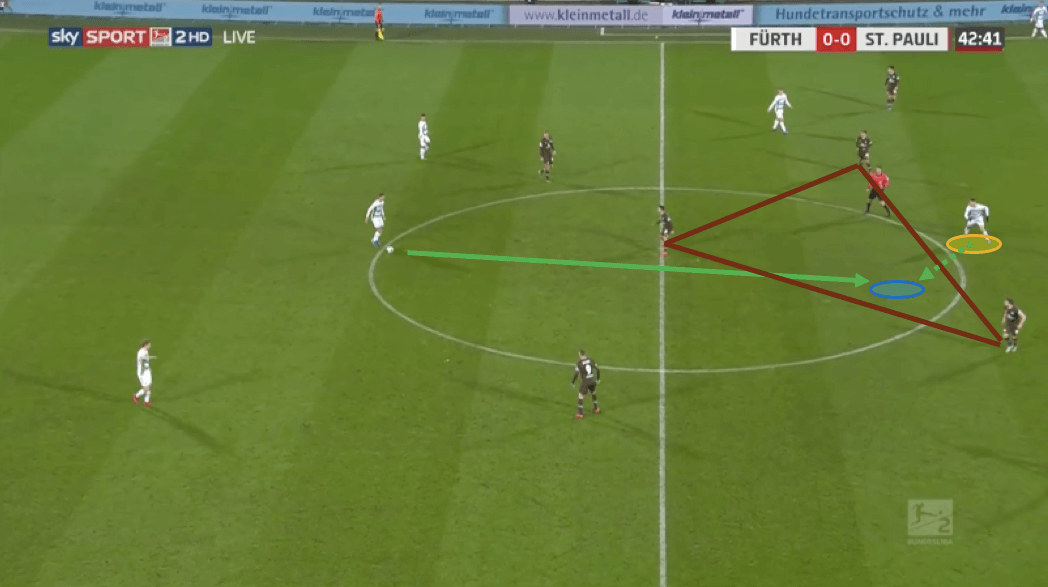 The first example takes into account being a pivotal cog in the build-up and taking advantage of the space given. Hrgota manages to get between the space of the defensive triangle set by St. Pauli; it’s an excellent pass to find Hrgota unmarked. With Hrgota having time, he turns and pushes forward. 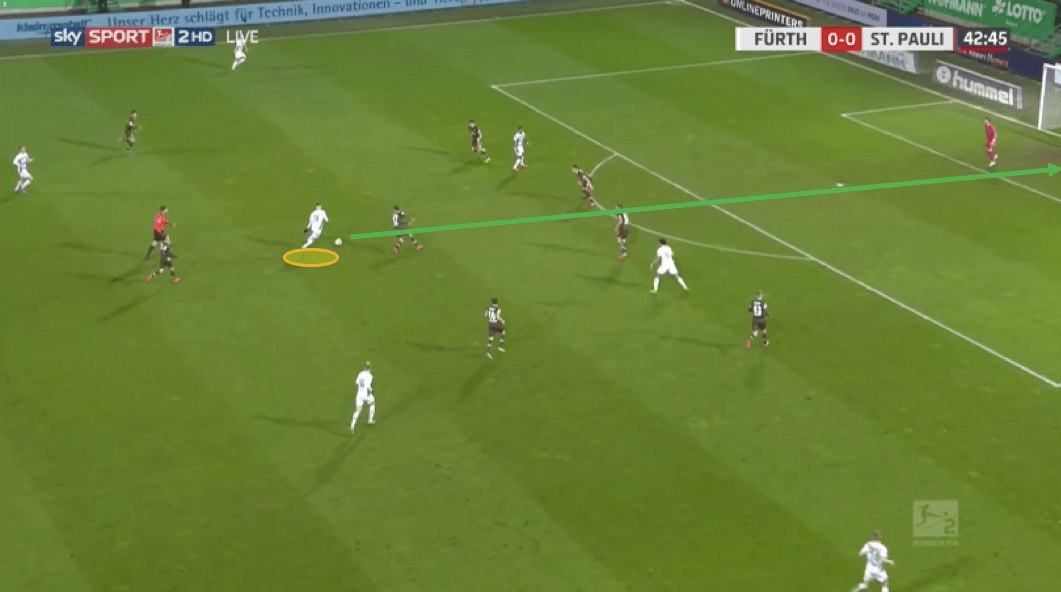 It should be noted that Hrgota does have an option to play a diagonal through ball, and in most circumstances, you would see this option used. Yet with an appetite for goal and the game crying for a goal, Hrgota takes aim and scores past a sprawling Robin Himmelmann. The wonder-strike breaks the deadlock for Fürth in a match which they would go on and win 3-0. 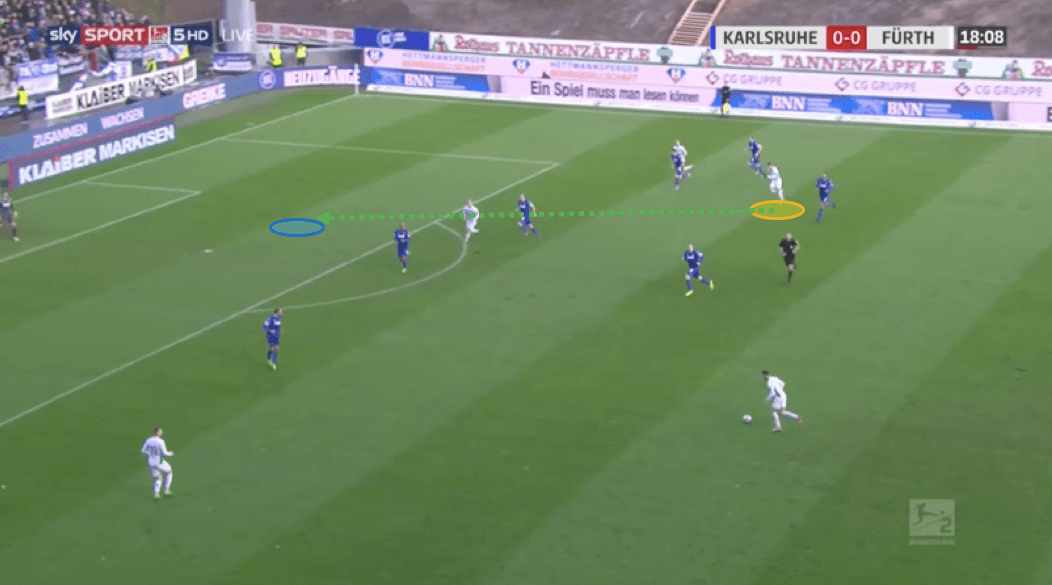 A third of his goals have come from outside the box, two from the penalty spot. But a number of his goals have come in part to being at the right place. The opener against Karlsruhe is precisely that. Left-back Daniel Raum receives the ball after an excellent pass from Hrgota, knowing that Fürth within striking the Swede gets on his bike and sprints towards the 18-yard box. Raum takes a low percentage option and shots straight at the keeper. However, the chance forces an error out of keeper Benjamin Uphoff who spills to the feet of Hrgota. Hrgota manages to dribble around the defence and helpless keeper to score.

A number of the nine goals have been opportunistic, yet as we know, they all count the same. In the goals department where Fürth have been in the lower tier, Hrgota has been a massive help. As mentioned at the start, Fürth managed a measly 37 goals in 34 2. Bundesliga matches. After 25, they have achieved the same total.

Hrgota does have a glaring weakness, and it’s a sign in the context of the position he plays in. The 27-year-old is almost incapable of winning his aerial duels at a consistent level. Throughout his playing career, Hrgota has only won just 19.7% of aerial duels competed in. Simply put, that’s an issue. Even with an improved 28.1% for this season alone, a statistic which shows how much Hrgota prefers the ball at his feet. This section will delve into Hrgota’s poor aerial duel succession and find why this is the case. 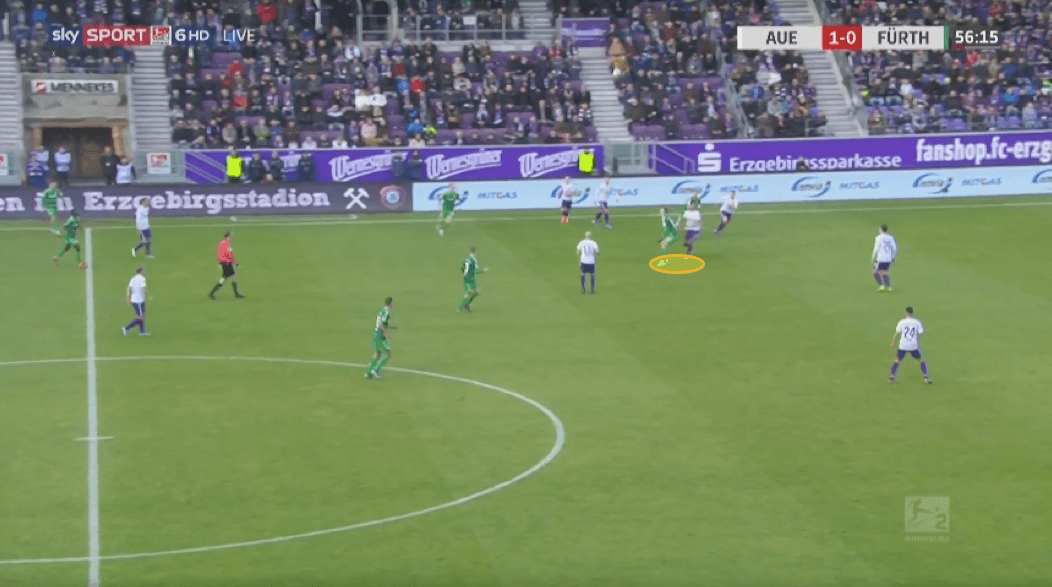 The initial situation against Erzgebirge Aue is the classic 1-v-1 aerial duel, Hrgota has good body position over his opponent. In this instance, if he leans back Hrgota would be able to protect the drop of the ball and potentially lay it off to a teammate. Yet as the ball comes in, Hrgota loses all strength and composure as the Aue defence headers away. Had Hrgota managed to maintain his original body position, he could’ve won the header or protected and held onto possession. 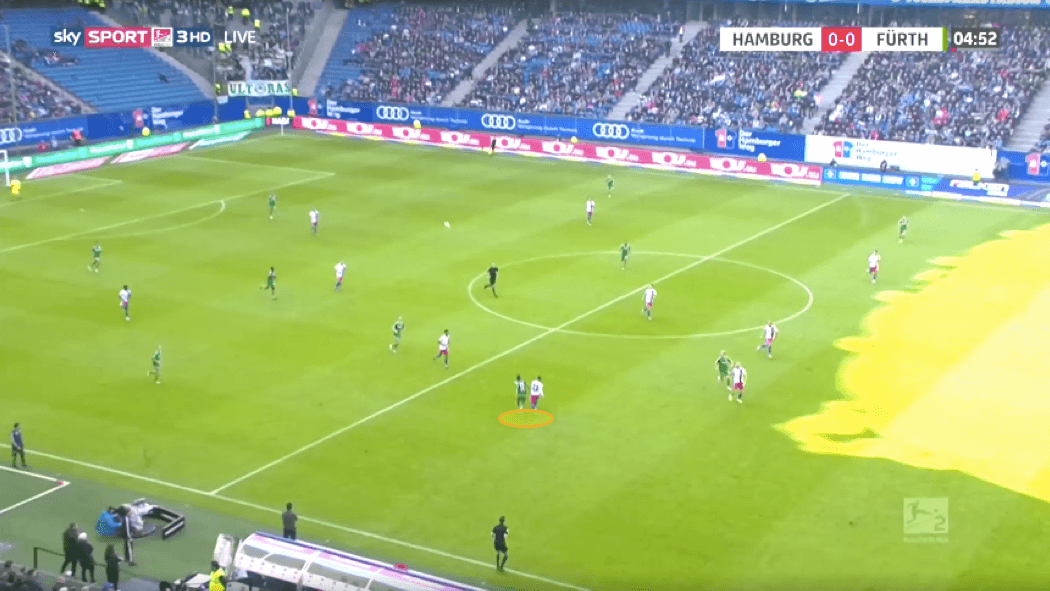 In the game versus Hamburger SV, Hrgota has an opportunity to win an aerial duel. He is up against the much smaller Tim Leibold who is giving away five inches in height. As the ball comes in Hrgota once again takes front position, asserting himself as the dominant figure. However, once again, Hrgota is out-muscled and out-played as Leibold manages to win the contest.

Multiple examples showcasing there are several issues which are leading to Hrgota’s inability to win an aerial duel. His positioning is quite useful in most cases; however, it would seem a lack of strength to hold his position as the ball comes in is an issue. At times, Hrgota fails to read the flight trajectory of the ball, causing the Swede to lose most of his battles.

At the peak of his powers, Hrgota has taken advantage of making the step-down from Bundesliga bench-warmer to 2. Bundesliga contributor. Hrgota has proven to be a valuable asset to Fürth as they give themselves an outside chance of promotion once the season restarts on the 16th of May. The question now is whether Hrgota can recapture his career-best form after a lengthy mid-season break.