Hamburger SV have had an interesting season and first-year trainer Dieter Hecking, and with the season currently halted they find themselves sitting third in the 2. Bundesliga table. The northern giants have been well known over the last couple of seasons for blooding young players through their academy and giving young players from other clubs the opportunity to play. Orel Mangala, Jorden Beyer and Hwang Hee-chan have all come to the club or currently remain on loan and have produced a meaningful contribution.

Following in the mould of bringing in a player from loan to lead the midfield group, Hamburg turned to Bayern Munich’s talent pool and signed Adrian Fein on loan for the 2019/20 season. Fein was initially a junior with 1860 Munich, but since the age of seven Fein has been on the books at Bayern. Hamburg have been mightily impressed with Fein a return is unlikely as Bayern have ensured Munich native remains with the record champions until 2023.

This scout report and tactical analysis will look at what Fein offers, how he has fit into the Hamburg’s tactics and where Fein stakes up against the best defensive midfielders in the 2. Bundesliga. 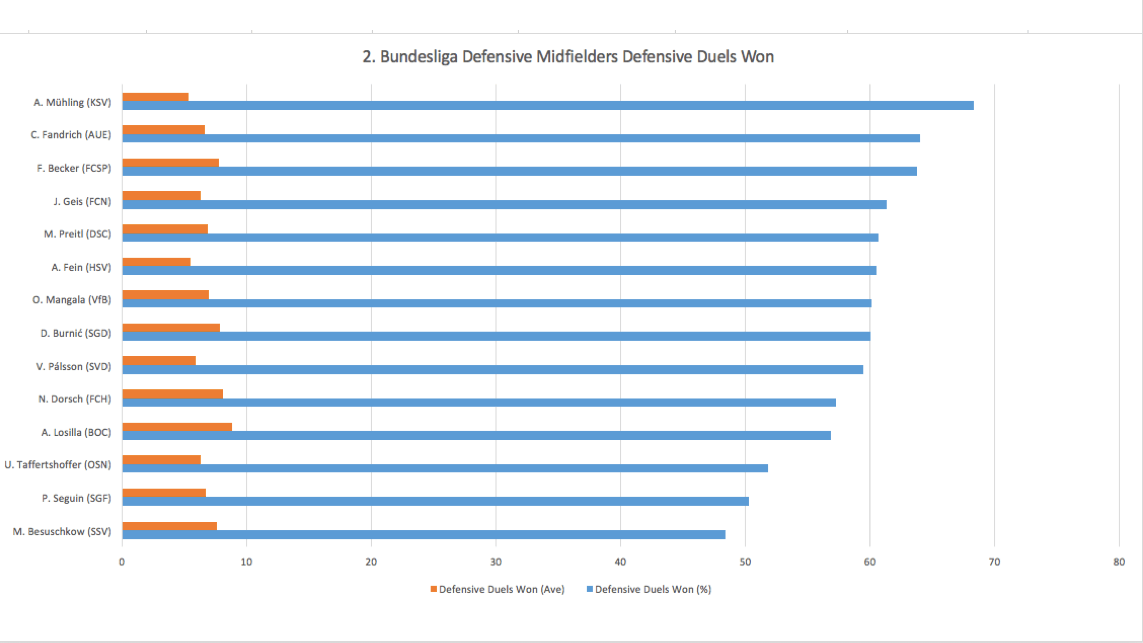 He reads the play relatively well and only on the odd occasion will you see Fein caught out of position. This only really happens when the opposition try to bypass the midfield through a long ball to the target man. When this is the case, Fein is quick enough to make a play on the ball. 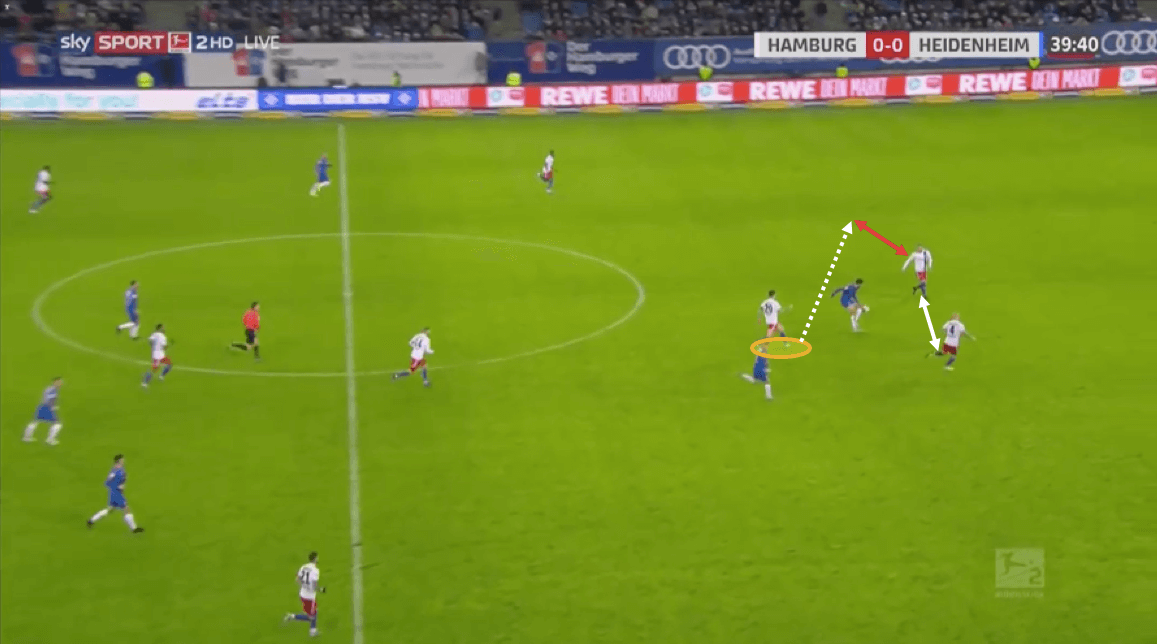 As shown in the analysis above against Heidenheim, striker Denis Thomalla is challenged by the two Hamburg centre-backs. Fein seems out of position from the outset. However, with the avenue to the right cut off for Thomalla, we see Fein brought into the play. In this instance, as Thomalla looks to break stride, Fein disposes the Heidenheim attacker and retains possession for Hamburg. 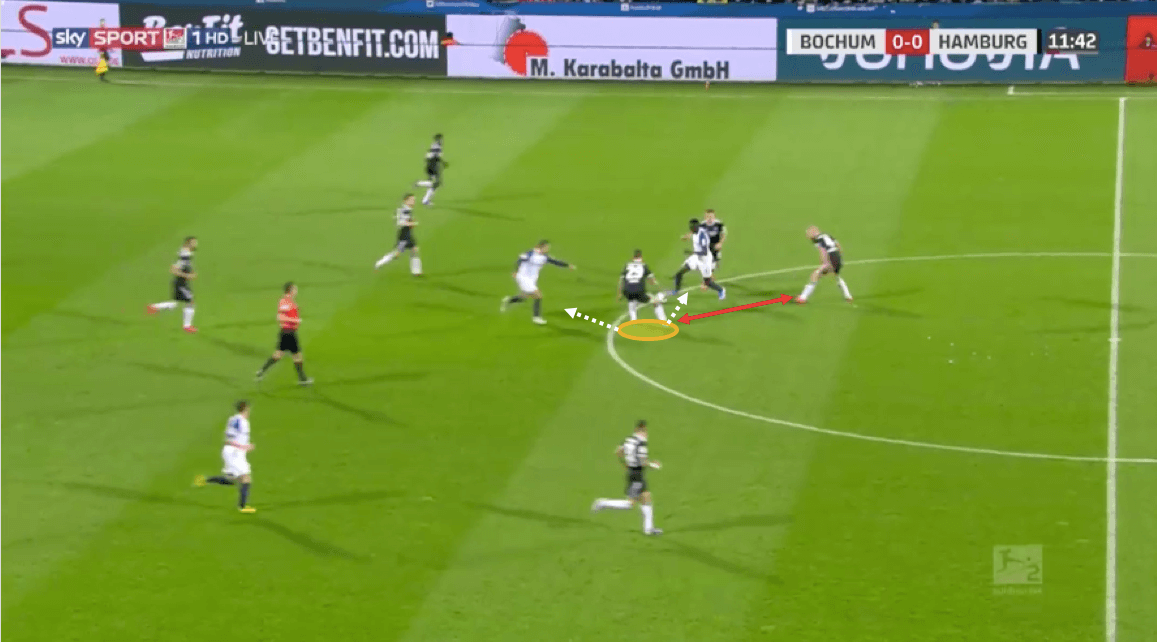 As mentioned early, Fein wins 60.5% of his defensive duels, and we see Hecking allow for more aggressive defensive approaches. Fein is seen in the example against Bochum as a disruptor of attacks. With Bochum looking to break with Silvere Ganvoula, Fein puts himself in an excellent position. Firstly, to intervene any potential through balls which could expose the defence, and secondly, he allows Rick van Drongelen to create a defensive overload. As Bochum looked set to counter, Fein and co put a stop to this.

There is cause for criticism when it comes to Fein in aerial battles. Although winning a respectable 51.7%, this is still considered one of his weaker areas. At 186cm, Fein is still lean and does get outmuscled to aerial contests. When strikers who are physically stronger than Fein, the Munich native does tend to get dominated with relative ease.

Fein has proven to competent and composed in possession, fantastic at playing the ball to feet with an arsenal of passes at his disposal. Playing at the heart of the Hamburg midfield, Fein is required to make short backward passes to a defender or the keeper, to even the more expansive long balls playing a winger into space. This season, Fein is ranked sixth amongst defensive midfielders in passing completion at 85.1% while completing an average of 55.73. 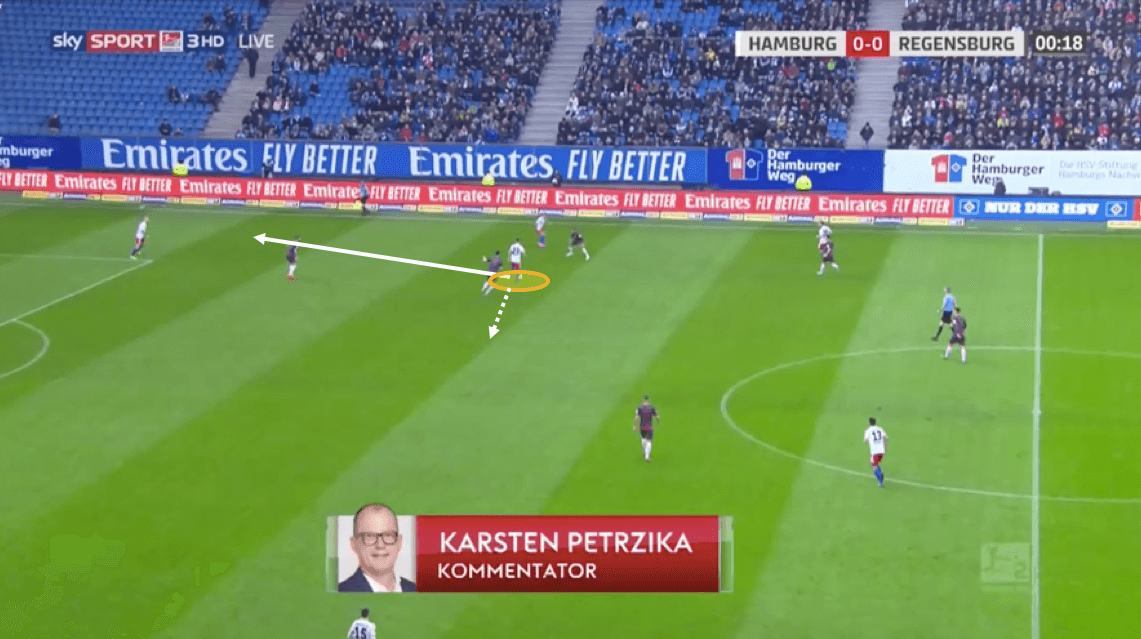 Fein attempts and completes the most passes in the 2. Bundesliga at his position as he is the focal point of Hamburg’s build-up play. We see frequent situations where Fein drops deep to come and collect, often playing the ball back to van Drongelen or Timo Letschert. In most cases, Fein hovers around after distributing towards his own goal to become an outlet going forward. 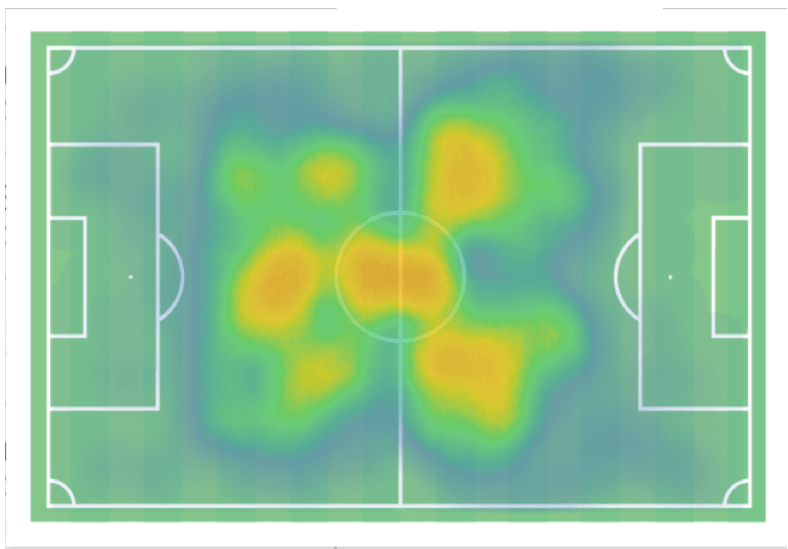 So often we see Fein present in all central areas of the pitch, prominent from box-to-box. Either collecting and starting the build-up play or creating as an outlet to either shoot from distance or restart possession for Hamburg. In most cases, Fein can be at his most dangerous pushing the ball forward into the final third. 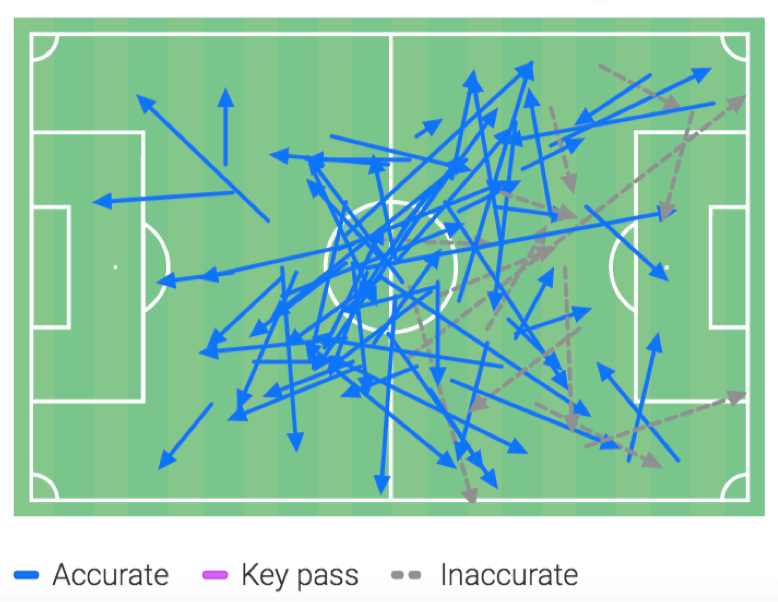 Fein is active and productive on the ball; the image above showcases passes completed and attempted in Hamburg’s game against Wehen Wiesbaden. Hamburg attempted 604 in the 1-1 draw with Fein attempting 82 and completing 69. His pass map showcases plenty of passes sideways and backwards as a mode of retaining possession rather than playing a ball which isn’t on. 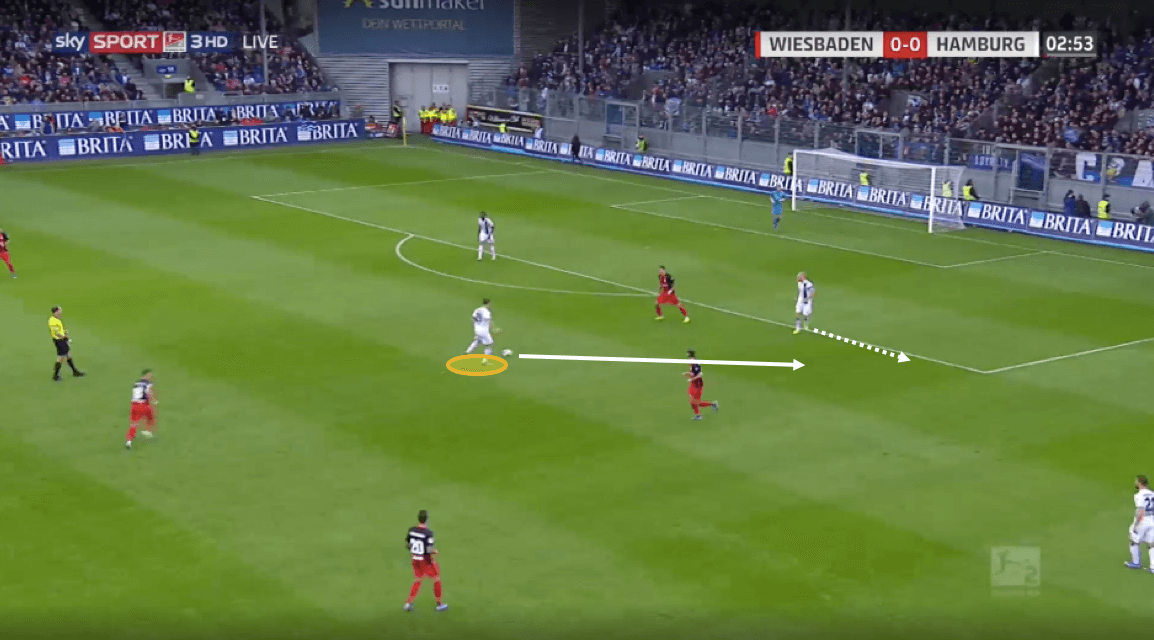 As mentioned previously, it’s common to see Fein facing his own goal. On occasions when teams press van Drongelen or Letschert, Hecking provides enables tactical support by ensuring that Fein drops into space. The hope tactically is with Fein tucking in between the open space; this opens up the Hamburg defensive pairing to spread and potentially find a wide avenue to exploit. In this example above, van Drongelen will fade to his left with Fein on the ball. The objective is to find left-back Tim Leibold who will push the ball forward and create interchanges with the attacking wingers. 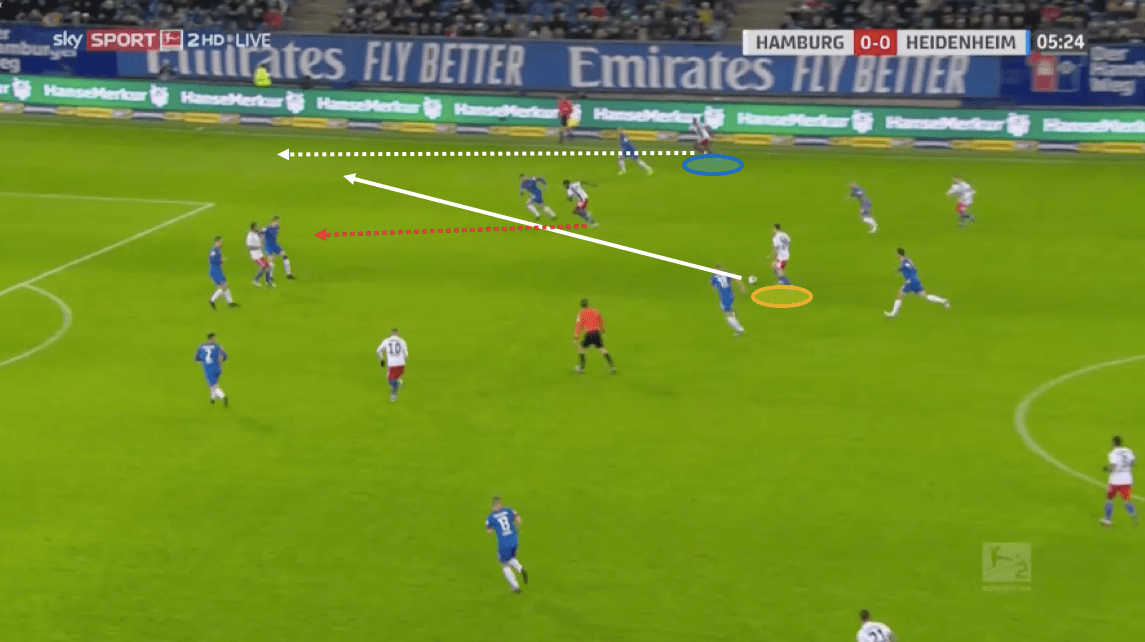 Fein is fearless when entering the attacking third, deep progressions into enemy territory have become a speciality of Fein’s this season in Hamburg. Fein is an artist going forward, playing his teammates into space and putting Hamburg into a dangerous attacking situation. Against Heidenheim, we see this at play, especially when Hamburg overload one flank. Case in point as Fein enters the final third, right-back Khaled Narey and right-midfielder Bakary Jatta are both making attacking runs. The key, in many ways, is the Jatta run, by engaging his opponent. This ensures Fein can play a piercing ball to the advantage of Narey.

We’ve talked about Fein’s class on the ball and playing a pivotal role in build-up play for Hamburg. One of Fein’s best attributes at Hamburg this season has been his ability to play the long ball. His ability to pick players out with daring diagonal balls to the attacking wingers, but his quickness to make decisive decisions to open the game up for Hamburg. Without hesitation, Fein will create an opportunity which allows Hamburg to attack deep into opposition territory.

If we compare the best defensive midfielders in the 2. Bundesliga who have played a minimum of 17 appearances, for long passing accuracy, we see the table above showcases Fein as a high-quality talent. Within the defensive midfield category, only Arminia Bielefeld’s Manuel Preitl has a better completion percentage than Fein at 67.9%. Let’s see this in action. 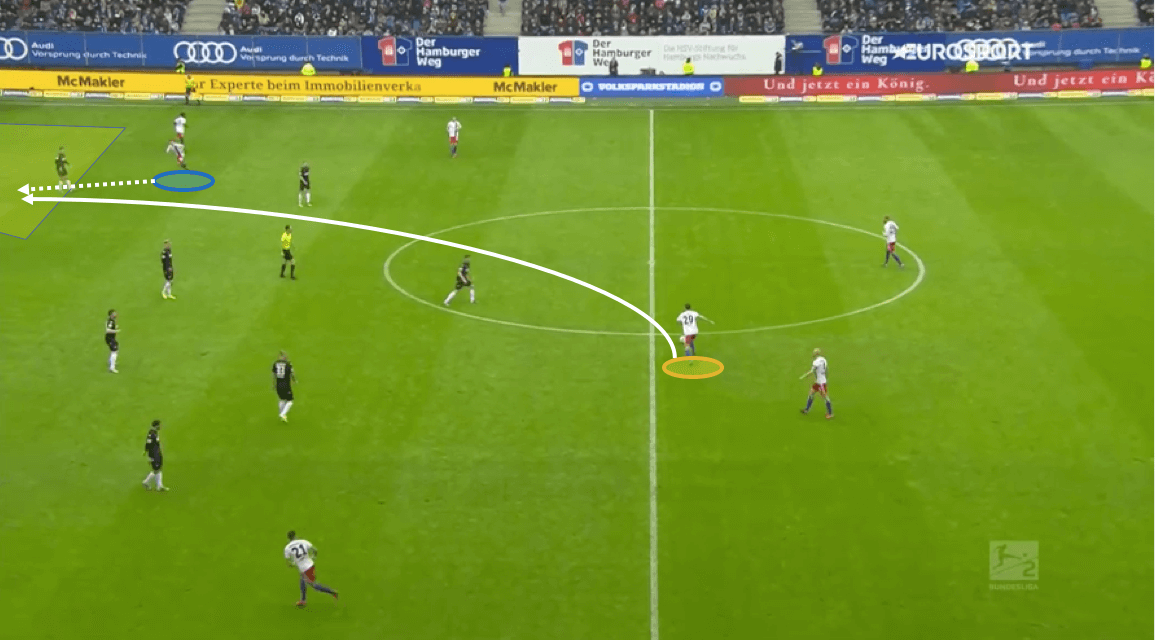 In Hamburg’s match with Karlsruhe, Fein showcases that he can comprehend multiple situations quickly and pick the best available option. From the outset, Fein identifies the space between the 18-yard box and the Karlsruhe defensive. He then sees Martin Harnik making an aggressive diagonal run to try and get in behind the defence. An excellently weighted pass puts Harnik through on goal with the striker unable to convert. The timing is on point, but the pass enables Harnik to be active within the play.

Fein is precise and doesn’t use the long ball often, an average of 2.55 attempts per game. Unlike a Johannes Geis of Nürnberg who attempts 10.05 every game. Fein has an excellent feeling and understanding of game situations. He is sensible with possession, and it’s no wonder that Hecking trusts Fein with Hamburg’s build-up in midfield. 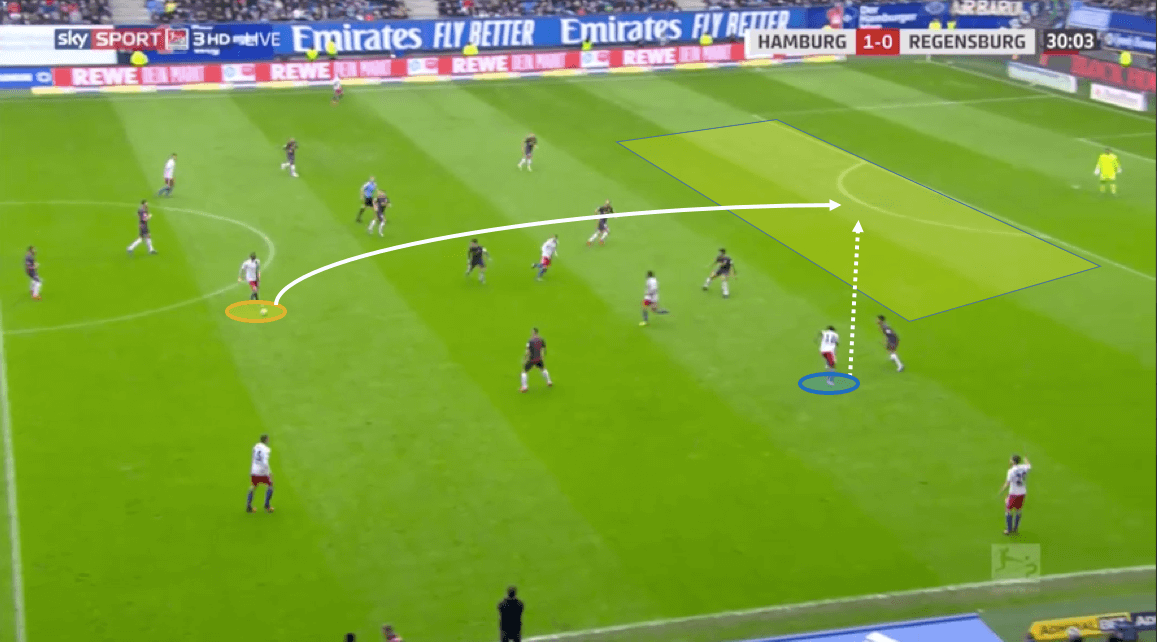 Above against Jahn Regensburg, we see Fein’s ability to carve up defences with the lobbed through ball. His initial processing of the Regensburg defence trying to squeeze up to cut the spaces between itself and the midfield, acknowledging that Jatta on the right is goal-side of his opponent and producing an excellent pass in stride for the winger.

The goal in the future for Fein will be to where the red of Bayern Munich, but the Munich native still has some ways to grow before gaining an opportunity in Hansi Flick’s side. His first obstacle would be to break into a first-team full of Champions League quality, from Leon Goretzka to Corentin Tolisso. Fein’s biggest challenge, however, would be to come close with and without possession to Bayern’s best Thiago.

One of the world's most complete midfielders, when healthy. And this year was a very healthy one by his usual standards. pic.twitter.com/fYxtmLAjDq

Thiago is one of the most complete midfielders not only in the Bundesliga but in world football. His only Achilles heel is staying healthy for consistent periods. His 2018/19 season was arguably his best as the Spaniard played a crucial role in ensuring Bayern won it’s seventh consecutive Meisterschale’s. As shown above, Thiago is elite when it comes to playing the ball for his possession and pivotal in all build-ups for Bayern. His is also exceptional defensively, an interception supremo and fantastic at timing his tackles.

Comparatively, Fein is on his way to building a repertoire that comes close to the exploits of Thiago. What interests us and many others is his deep progressions for a number six, much like Thiago, Fein is more than comfortable pulling the strings within the final third and has done so as examples above have showcased. Fein still has room for improvement defensively, especially when it comes to successful tackles per game and interceptions. But the signs are there; he is crucial in build-up play and more than capable running the offensive sets.

Fein isn’t Thiago; however, Fein can be a Thiago type with more experience at 2. Bundesliga and eventually Bundesliga level. The signs are there for Fein, and, at some stage, an opportunity will arise for the Munich native.

If we do get the season back underway, Fein will play a critical role in ensuring Hamburg don’t make it a third consecutive season in the 2. Bundesliga. After that, a return to Bayern Munich. Other teams in the Bundesliga will be more than interested; it could be a Serge Gnabry situation to see if he excels in the top tier before getting his chance in Bavaria.