André-Pierre Gignac changed his club and switched the place of his residence from Marseille (Ligue 1) to Monterrey in the summer of 2015, and for five straight years he has consistently been one of the best players in LIGA MX for Tigres U.N.A.L. Having scored 112 goals since 2015/16 season in all competitions, he is the main goalscorer of the team with 8 goals out of team’s 13 in Clausura and a definite fan favourite. His scissor goal in the recent match against Pumas U.N.A.M drove crazy every Tigres fan on and outside the stadium. His passionate celebrations with the fans after every single goal show his love to the club and establish the sense of his loyalty to the supporters. Despite being in the closing stages of his career, Gignac keeps putting up great performances game after game. In this tactical analysis in the form of a scout report, I will look into the main aspects of his game and how he manages to dominate LIGA MX through his reading of the game and experience. 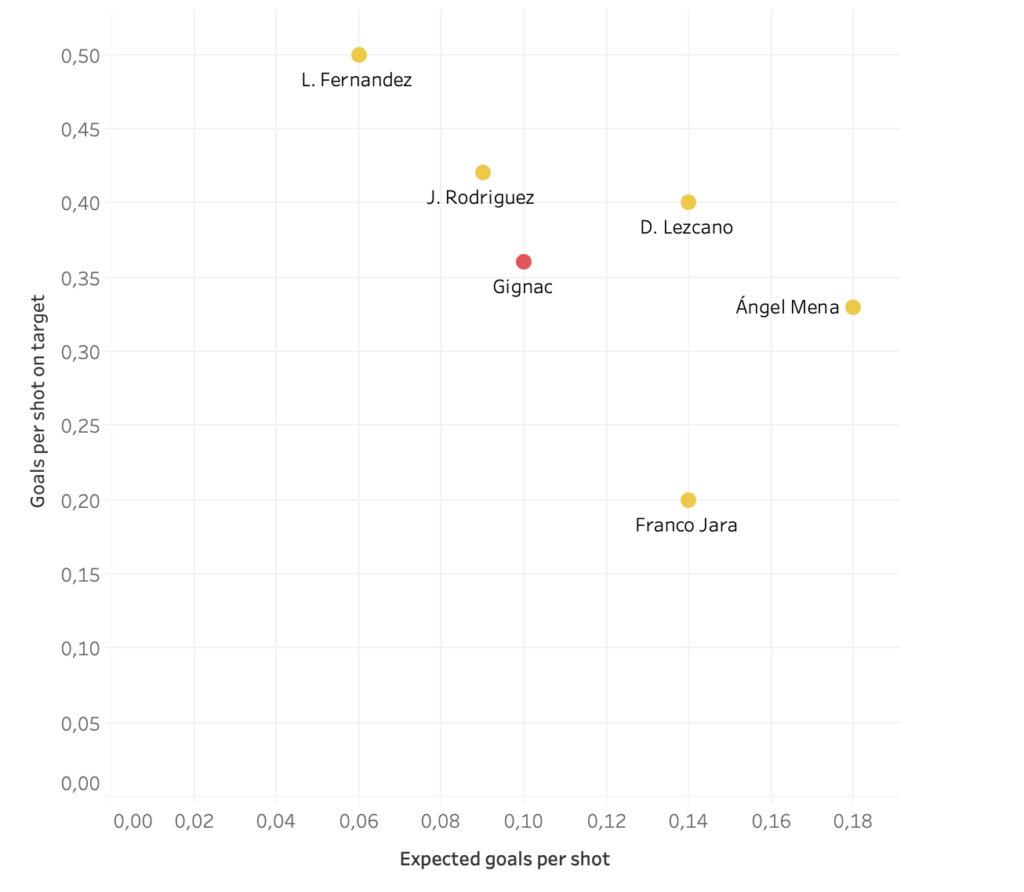 His average xG per game this season is at 0.56, which basically predicts him to score a goal every two games. In terms of shooting accuracy and aerial duels, Gignac has 37% accuracy of shots and 34% aerial duels win-rate. Gignac is 6’1 tall, and he is a useful weapon when it comes to holding off the ball after long passes and then finding teammates to continue the attack. He is good with shielding the ball while waiting for a good option to pass to and drawing fouls. He is not that great with aerial duels and he is not a target-man type of striker, but can be an option for the build-up in that regard.

Regarding his passing accuracy, he has 83% of all passes completed, and that is a great number for a striker. As we will see in the passing section of this analysis, he has an important role in the team’s attacking play and he produces a lot of risky passes.

He attempts around three dribbles per game with 45% completion rate. He stands firmly on his feet when he is on the ball, and good ball control allows him to take on one or two defenders and get passed them, even despite not having the biggest amount of pace.

Gignac’s position and role on the pitch in-game are very different from a regular striker, so I believe he is playing in a similar role to a false 9. He often drops deep to receive the ball and to progress it forward himself. Gignac also often positions himself on the left side of the pitch, acting more as a left-winger, not a striker.

Below you can see an example of him dropping deep and providing another passing option while his team gets heavily pressed with big numbers on the right side of the pitch. He holds on to the ball and is able to draw a foul after a good body positioning and great shielding the ball from the opponent.

In the image below there is a second example of Gignac’s movement and positioning during the game. He is receiving the ball on the left flank while the other striker, Enner Valencia, is the only one in the centre-forward position. This example of his movement happens more often during the game, and from the left side, he distributes the ball to the central areas or to the other flank. Below you can see a Gignac’s heatmap for the 2019/20 season, and you can see that his most active place is around the left half-space and in the 18-yard-box, as well as the left flank. He spends a lot of time in-game roaming across the final third(primarily on the left side), occasionally dropping even deeper to get the ball from defenders. Gignac worked with Marcelo Bielsa, now coaching EFL side Leeds United, and Didier Deschamps during his five-year spell at Olympique de Marseille, and thus he is well tactically-drilled to not just stick to his position but to free roam more and find spaces, where he can be a good passing option or from where he can collect the ball and drive forward.

André-Pierre Gignac is the main goalscorer of Tigres U.N.A.L. and is the leading score of the whole 2019/20 season with 18 goals. Despite Tigres having two other star attackers in Eduardo Vargas and Enner Valencia, who have played and made themselves known in European football, Gignac is the most responsible out of all of them for providing goals. According to Smarterscout, Gignac has 54% involvement in total expected goals of the team this season, which proves his crucial role in this department.

From a statistical perspective, Gignac makes 3.77 shots per game with a 37% accuracy. He is putting up a good volume of shots, which means he gets into shooting positions a lot, and as we saw in the statistical section, nearly every third his shot on target turns into a goal.

Due to his positioning during the attacks, when he is on the left flank he cuts inside into his right foot and then tries to take a shot when in the penalty area. In another case, he can play dangerous passes into the penalty area for the arriving Valencia and others.

Because of his age and thus not a high amount of stamina, Gignac practically never makes runs into the 18-yard-box after the transition. This is the job for Vargas, Valencia and other speedy players, who, with their pace, can make such runs. When one of these players enters the penalty area, Gignac is around zone 14, and from there he can make shots like in the example below. Valencia has the ball, and Gignac arrives into the penalty area, where he is unmarked and is free to take the shot. As in the example above, due to his lack of pace, Gignac usually positions near the zone 14 in the closing moments of attacks, and he directs the play from there with the passes and shots. He distributes the ball to the flanks and then gets into the penalty area already as an aerial threat, or shoots himself if there is an open position. He has a firm shot on him and good shooting technique too, which has been proven to be a vital combination for him so far.

Gignac is composed, aggressive kind of striker with a big volume of shots, and even the lack of pace and physicality doesn’t bother him from having one productive season after the other.

As I mentioned previously, despite Gignac’s nominally playing as a striker and having such a high goalscoring record, he heavily participates in the build-up. Gignac drops deep or drifts wide to the left flank, and from there he can make passes to the central zones or switch play to the other flank.

Below you can see his passing map in both halves of the game against Pumas U.N.A.M., where he scored a hat-trick, but it didn’t stop him from the participating in the passing play of his team.

You can see that he makes most of his passes to the centre, further down the flank, or to the other flank with a long pass. He can passes that destroy the opposing defence: through balls, diagonal passes to the other flank and passes that progress the ball further down to his flank. Gignac plays 21.7 passes per game, and even though it is not a big number(as for any striker), he plays a big part in team’s build-up and during the attacks in the middle and final thirds.

In terms of his dribbling, Gignac makes 3.07 dribbles per game with a 45% success rate. He has a low centre of gravity, thus he is a hard player to push off the ball or to knock him down. Also, because of that, he is able to make fast turns that take opposition defenders by surprise.

When he attempts to dribble, he starts making a lot of small steps to get better control of the ball, so he can turn and twist without releasing the ball too far off from him. With dribbling, he tries to get into the shooting position, make some space or open a passing lane, so it is a useful outlet for him to have.

During his five-year-spell in the Mexican league, Gignac proved his worth and his status of a striker with a great goalscoring sense. His experience and understanding of the game make him a lethal striker even with his low physicality and lack of pace. He is an important part of Ricardo Ferretti’s tactics, and without him Tigres’ already disappointing goal record this season would be even worse. He has a lot of great traits for a striker to have, including finishing ability, goalscoring sense, link-up play and frequent participation in the build-up. In my opinion, he is one of the best transfers to LIGA MX this century, bringing a whole lot of goals and giving excitement to the fans.