After having defeated Chelsea in the UEFA Champions League midweek, there were some concerns that Bayern Munich would come out flat against TSG 1899 Hoffenheim. Those worries were quelled quite early as Bayern began in the second minute and put five more in the net to stay at the top of the Bundesliga.

This tactical analysis looks to understand the tactics that Hansi Flick’s Bayern Munich used to defeat Alfred Schreuder’s Hoffenheim by a score of 6-0. Bayern were able to achieve this massive result in a match where the actual competition was prematurely ended after their ultras unveiled a banner aimed at Hoffenheim’s owner that was deemed offensive enough to halt play, resulting in almost all 22 players passing the ball to one another for the final 15 minutes. 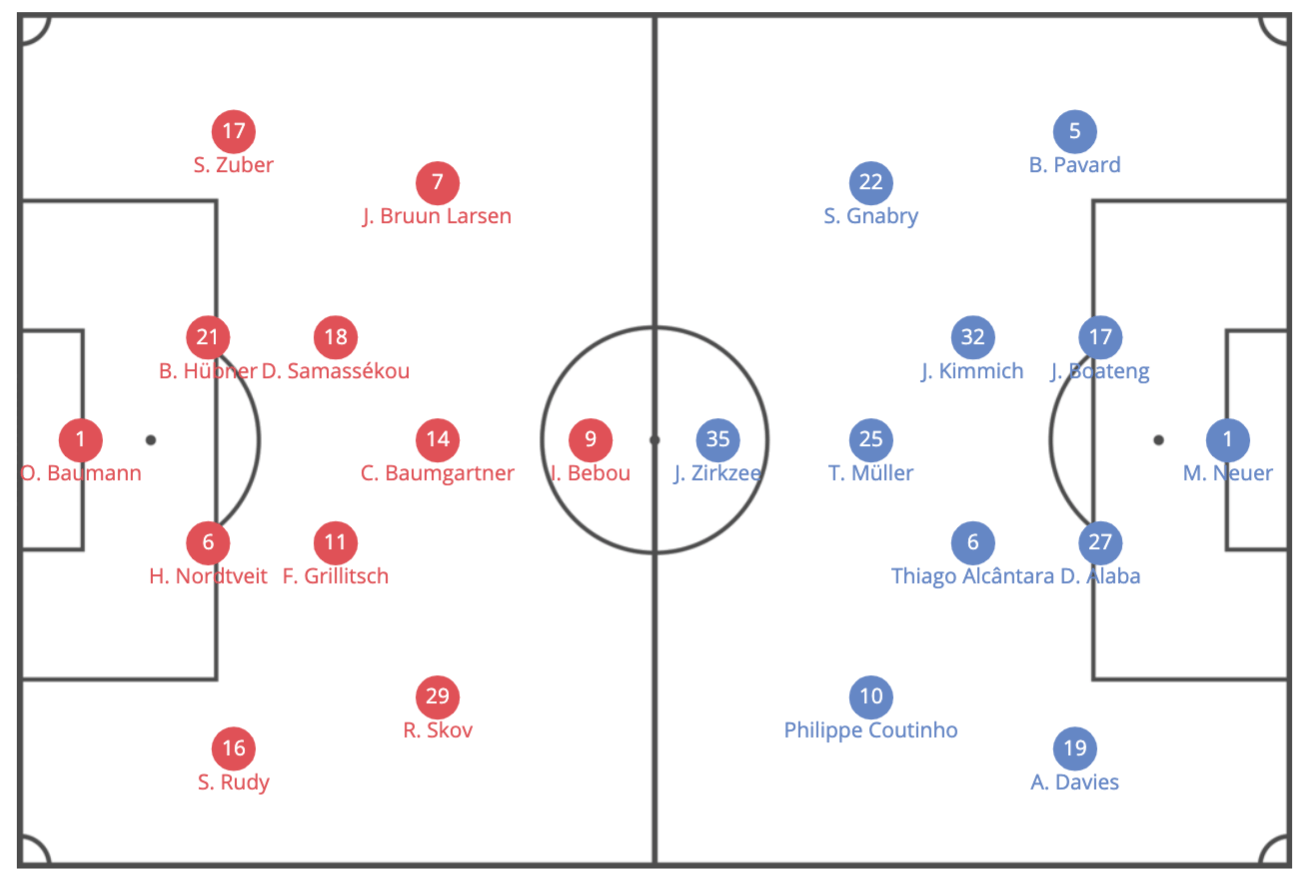 Hoffenheim came out in their 4-2-3-1 formation with Oliver Baumann in goal. Steven Zuber and Sebastian Rudy started the match as outside backs, with Zuber on the left and Rudy on the right. The centre back pairing consisted of Benjamin Hübner and Havard Nordtveit. That means three of the starting four defenders primarily ply their trade as midfielders. Diadie Samassékou and Florian Grillitsch were the two holding midfielders, with Jacob Bruun Larsen, Christoph Baumgartner, and Robert Skov in front of them from the left side of the pitch to the right. Finally, Ihlas Bebou was the lone striker on the day.

Hansi Flick sent his men out in the same formation but saw much more success than his opponents from Hoffenheim. Manuel Neuer played in goal with Alphonso Davies, David Alaba, Jérôme Boateng, and Benjamin Pavard in front of him as the back four. Bayern’s two holding midfielders were Thiago and Joshua Kimmich. In front of the holding defenders were Philippe Coutinho on the left, Thomas Müller in the centre, and Serge Gnabry on the right, with 18-year-old Joshua Zirkzee starting as the striker, replacing the injured Robert Lewandowski.

Bayern began the match looking to exploit the width of the field. During their buildup, the outside backs would provide the width to stretch any pressure that Hoffenheim would provide. 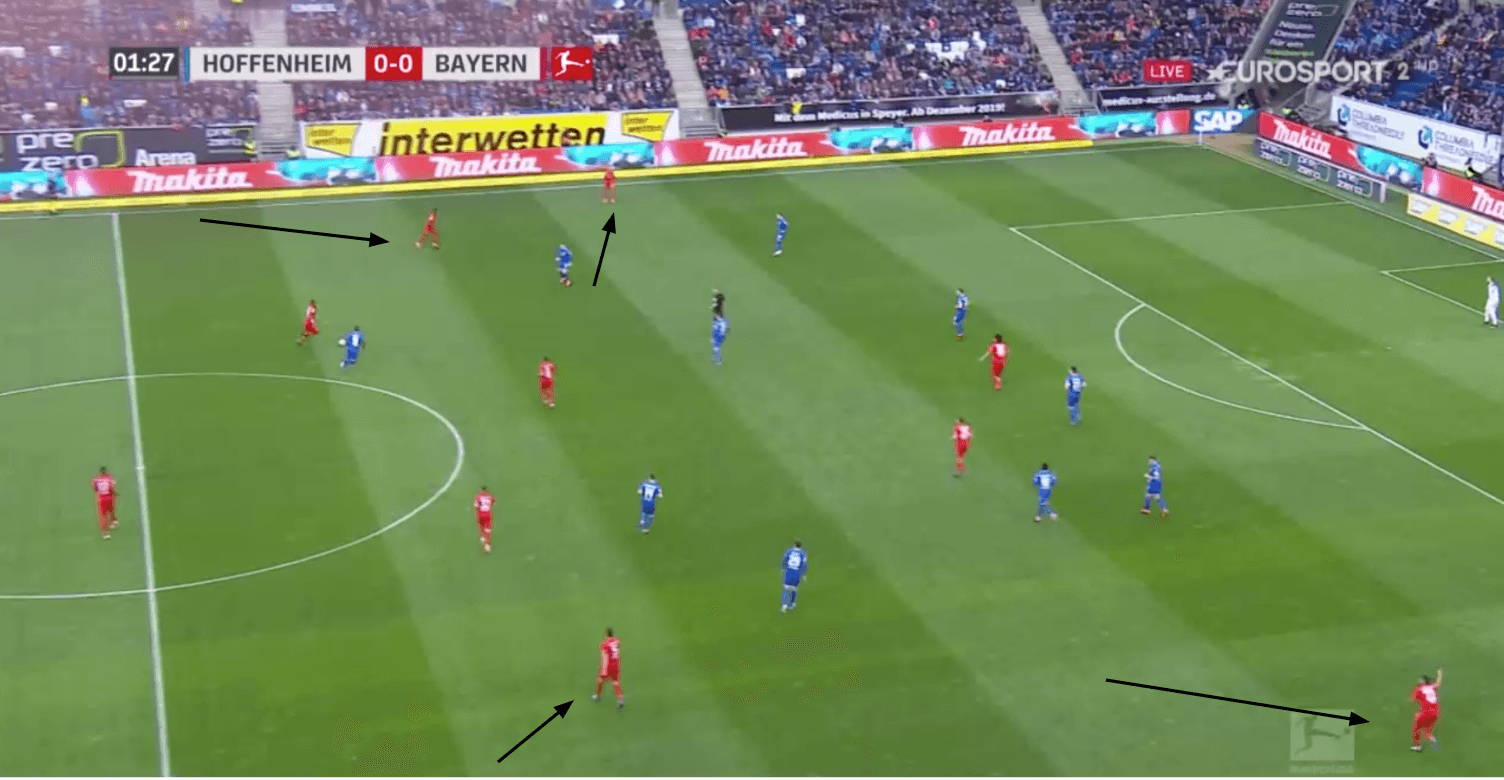 When Bayern would progress past the pressure into Hoffenheim’s half, the wingers, mainly Thiago and Gnabry, would provide the width. Here, we see both Pavard and Davies moving more centrally to isolate their respective wingers in front of them. As they tuck in, the wingers go wide and find themselves in lots of space, which Bayern looked to exploit all game.

This width was helpful in creating 1v1 situations, which definitely provided Bayern with a qualitative advantage in almost every situation. 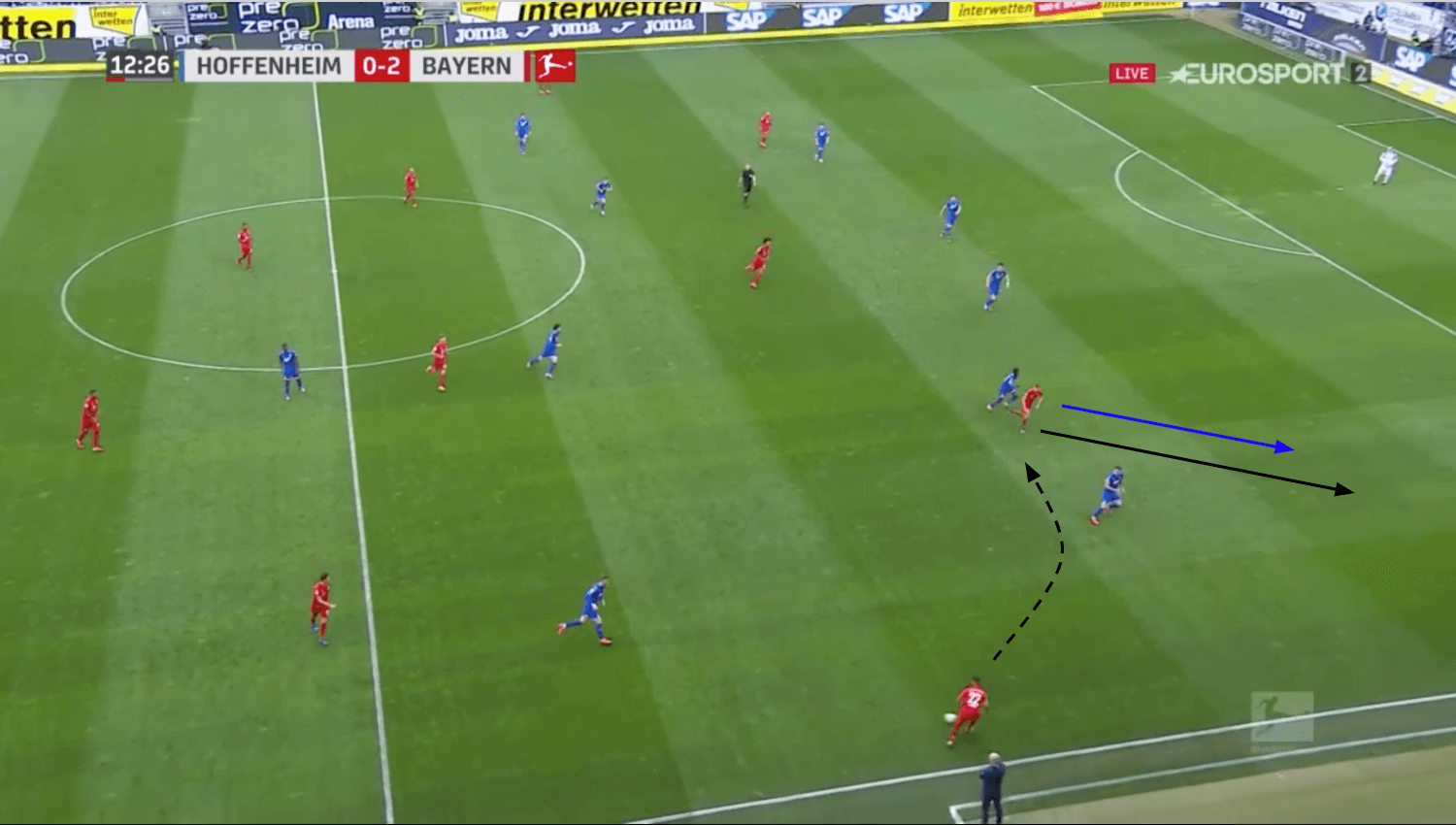 In the image above, Serge Gnabry receives the ball in a lot of space. At this point, it’s hardly a 1v1 situation, as no one from Hoffenheim has stepped up to him. As he receives the ball, Thomas Müller makes a diagonal run from the centre of the pitch, dragging his defender with him. This opens up room in the half-space for Gnabry to attack and attempt to exploit.

Bayern continued to try and isolate Gnabry and were ultimately rewarded for doing so with their third goal.

Again, it is the movement of Thomas Müller that gets the goal started. His initial positioning starts on the left side of the pitch. His diagonal run towards the centre of the pitch brings his defender with him, opening up room for Gnabry. Alaba, who is on the ball, is actually dribbling in the same direction that Müller makes his run, making it seem like the ball will end up that direction. As Alaba moves on the angle, Hoffenheim shifts over, leaving Gnabry all alone. Alaba is able to square up his hips, and he plays the ball through to Gnabry, who has time to settle and cross, which Joshua Zirkzee is able to get on the end of and finish for Bayern’s third goal of the match.

The diagonal pass that Alaba played to Gnabry was one of many that Bayern looked to find in their match. They used this pass to break down Hoffenheim’s defensive setup, many times bypassing multiple lines of defence. 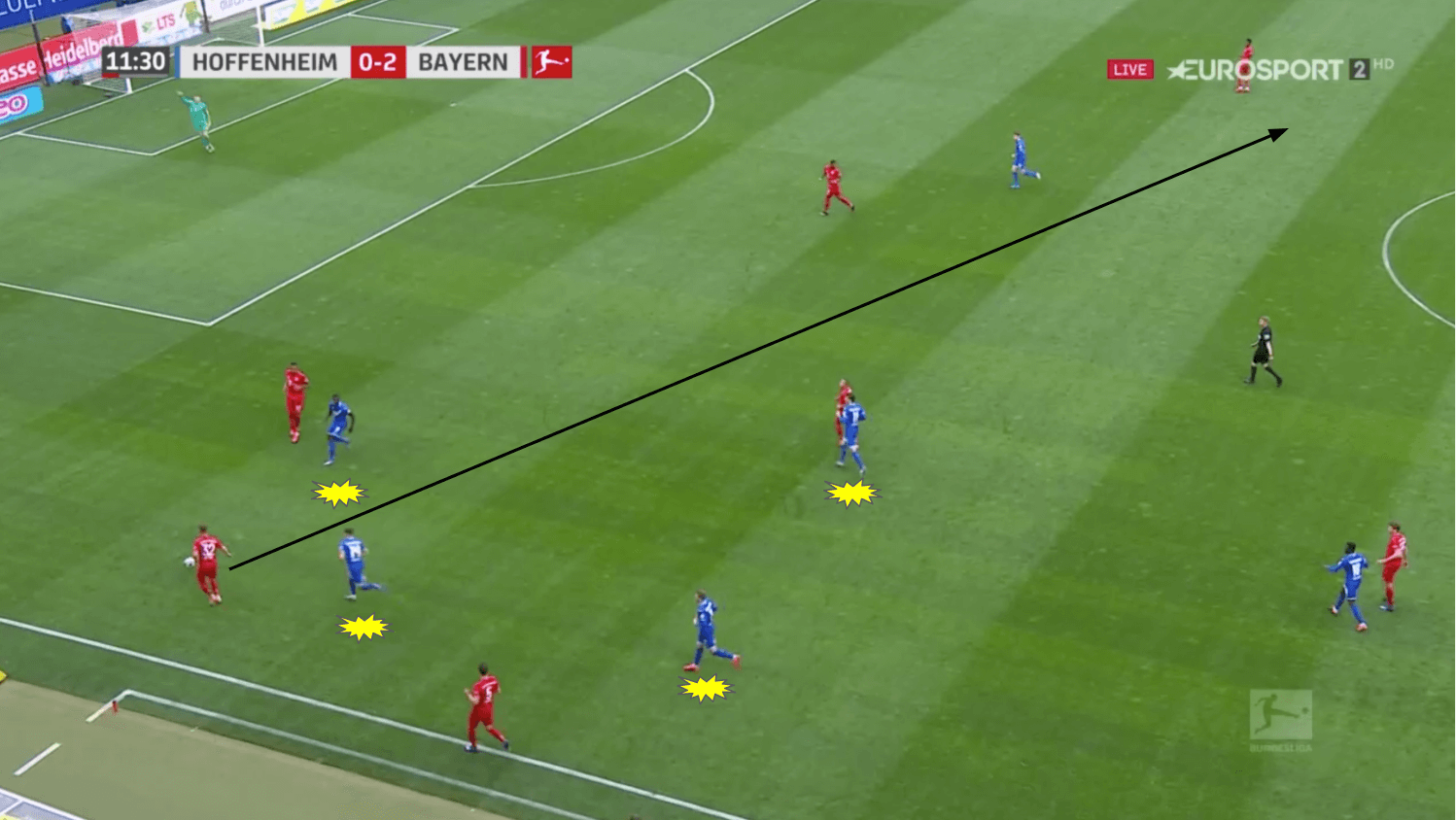 Bayern didn’t just use this pass in attack, but also when under pressure in their own half. Here we see Bayern under pressure as Joshua Kimmich dribbles back towards his own goal. Four Hoffenheim defenders are providing an appropriate amount of pressure in hopes of recovering the ball and quickly attacking. Because they have so many players committed, there were players open if Kimmich could find them. In this case, he rifled a pass across the way to Alphonso Davies, who is open on the left side of the pitch. Davies was able to receive the ball, and, because of Hoffenheim’s pressure on Kimmich, he had space in the middle of the pitch to exploit with his speed. 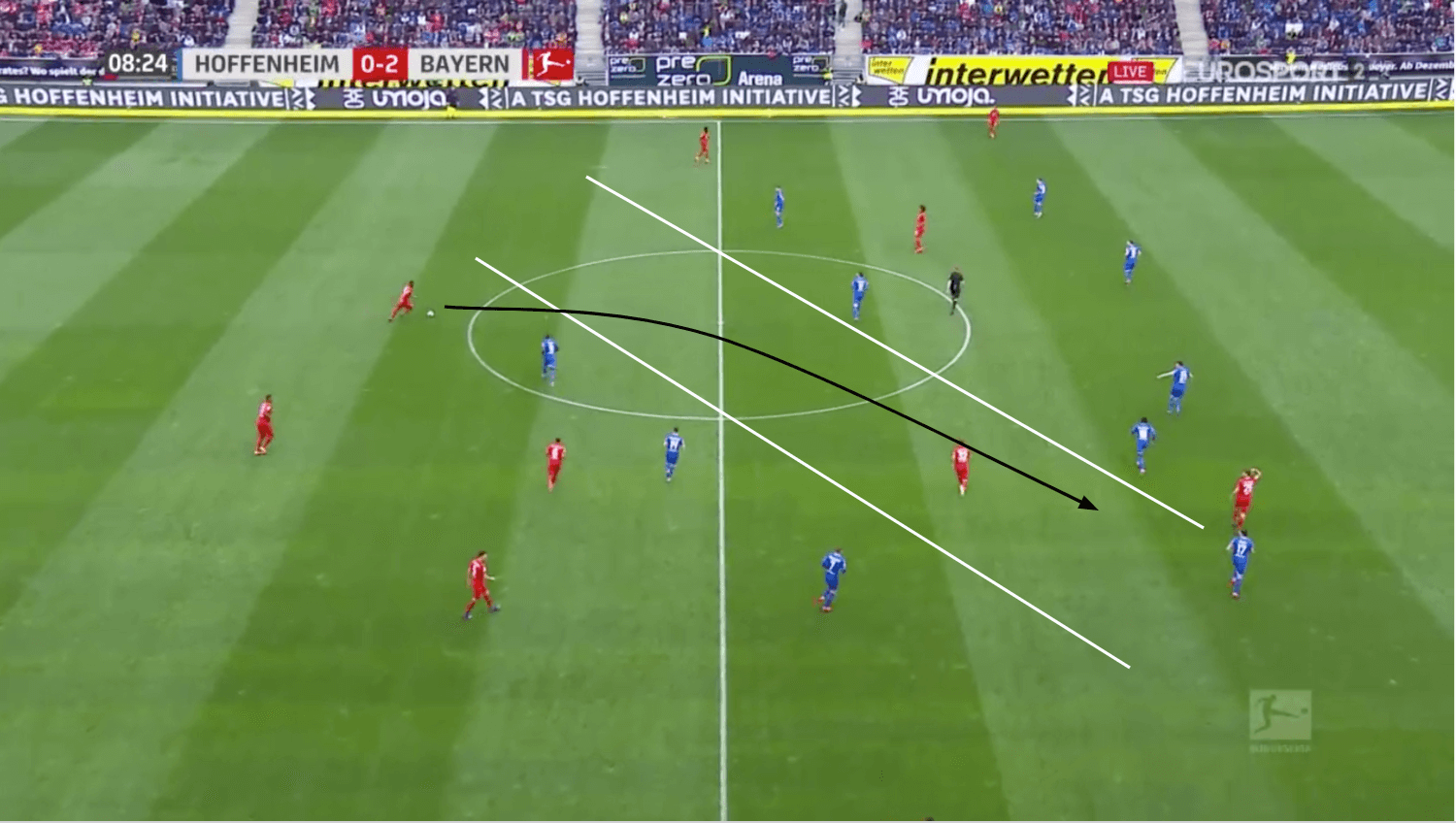 Again, Alaba delivers a dangerous ball. In the image above, there is a massive passing lane, primarily due to Hoffenheim not being as organized as they would have liked to be. Alaba created space for himself and zipped a pass towards Kimmich, who read the weight of the ball properly and left it for Thomas Müller. The pass is so effective because it breaks two lines of defence, which eliminates a total of six defenders from play with one pass. 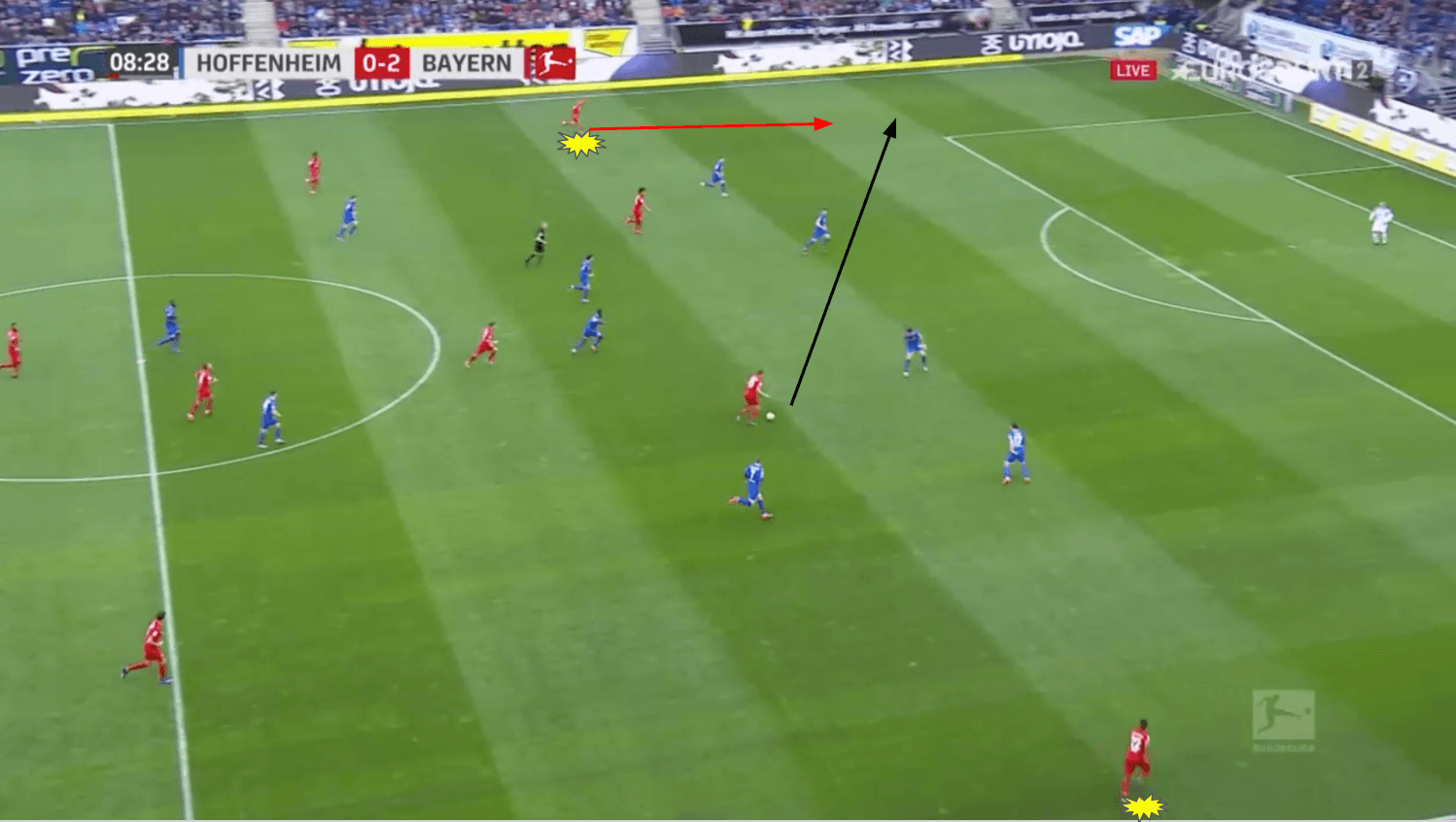 As Müller turned with the ball, the previously highlighted width is again at play. Both Gnabry and Coutinho are making runs down the wings, with Coutinho ultimately receiving the ball. With two diagonal passes, Bayern were able to open up Hoffenheim’s defence and get an incredibly talented dribbler of the ball in a 1v1 situation right outside the penalty area. Bayern continued to utilize these long diagonal passes as a means to create a qualitative advantage.

Hoffenheim really struggled to create chances for themselves in this match, only generating 0.40 xG through a total of three chances. Part of the reason they struggled to do so was based on their positioning when they were able to possess the ball in Bayern’s half. 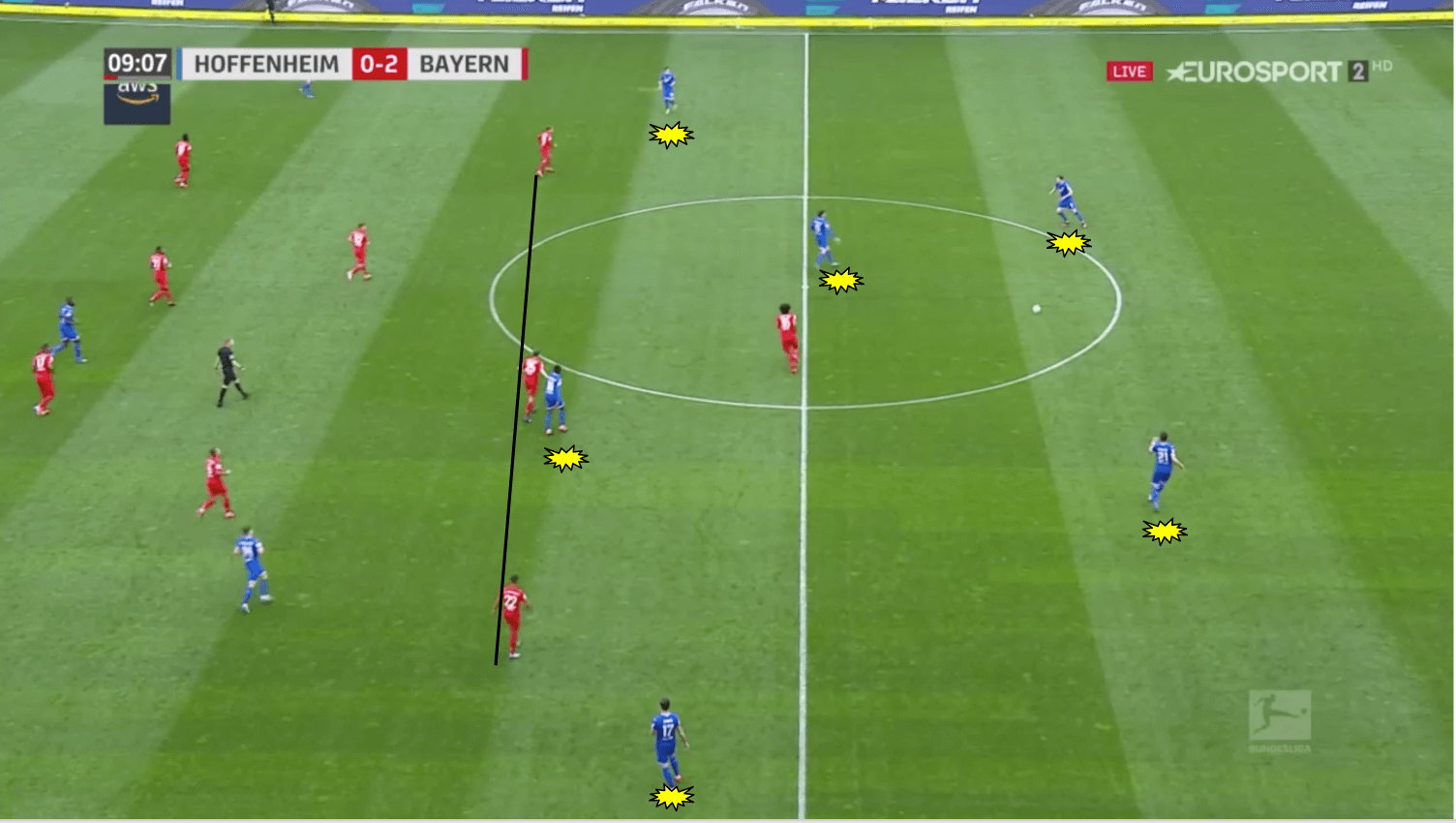 In the image above, Bayern have found their 4-2-3-1 defensive shape as Hoffenheim pass the ball from Benjamin Hübner to Havard Nordtveit. As Nordtveit receives the ball, none of Hoffenheim’s midfielders have truly positioned themselves properly. The majority of them have not broken Bayern’s first real line of defence, which creates a disconnect between the forwards and the ball. While Hoffenheim does have Christoph Baumgartner behind that line, he is all the way on the other side of the pitch from Nordtveit, so he isn’t an option to receive the ball. The lack of options in the midfield led to the ball being passed out and Bayern regaining possession.

Another problem that often plagued Hoffenheim was how direct they were. Hoffenheim would look to build out of the back in their buildup, which wasn’t super successful, as Bayern were willing to commit men forward. However, when they would beat the press, the decision making after would often see them lose possession. 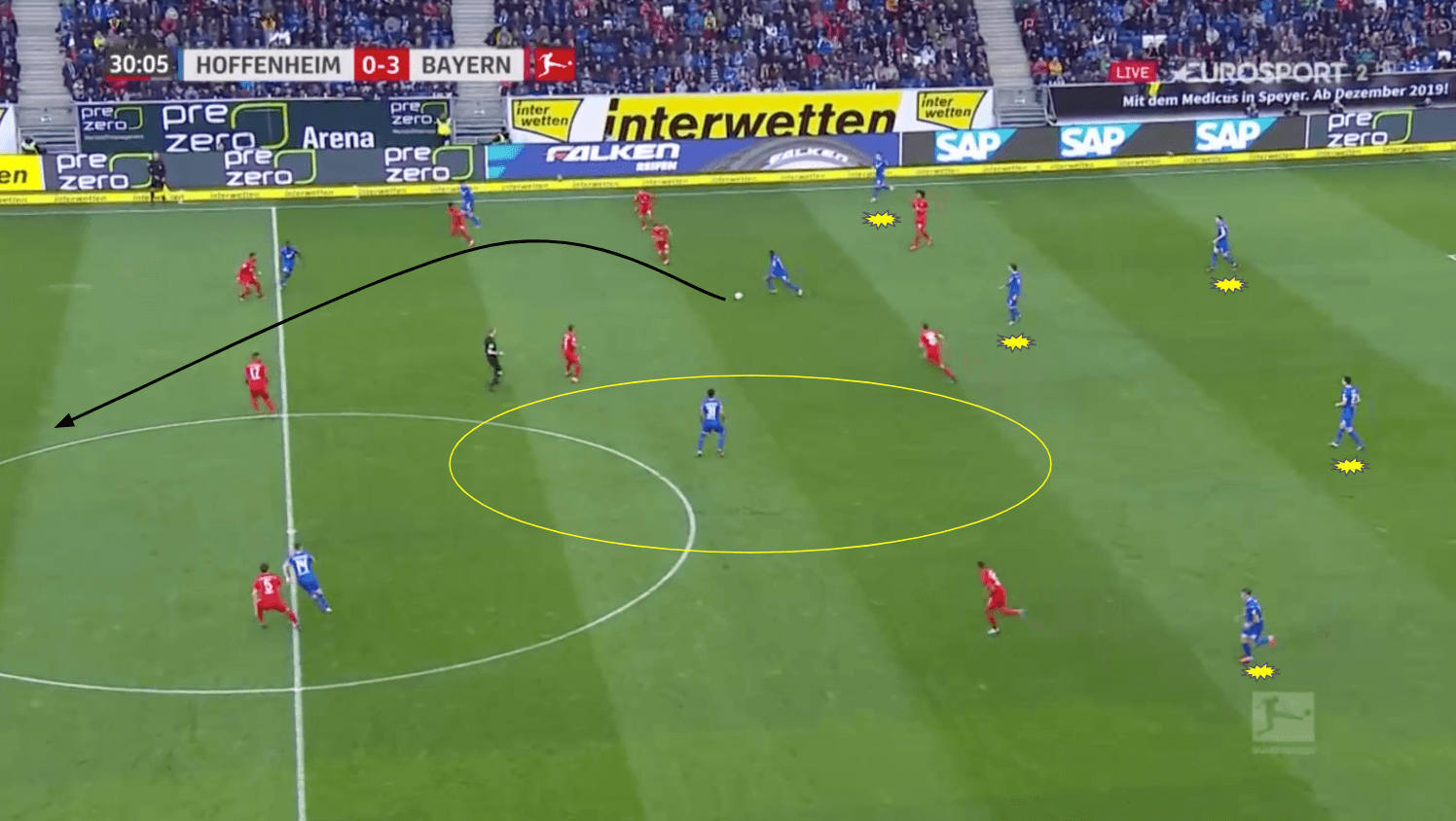 Here, Diadie Samassékou receives the ball at his feet just after Hoffenheim had successfully evaded Bayern’s pressing. Instead of looking to progress with his teammates as a unit and allow the five men behind the ball to move up the pitch, Samassékou decides to play a long aerial pass to Baumgartner, who is tightly marked by Benjamin Pavard, a pacey outside back. The ball is eventually cleared by Manuel Neuer, who was quick off of his line. Lucas Ribeiro, who was subbed on just before this, is the main in the yellow circle. He had a lot of space all around him where he can receive the ball with time to turn and progress up the field, supported by his teammates. Instead, Hoffenheim tried to play the ball long and ultimately lost it shortly after. This pattern of not properly supporting the man on the ball was a big reason their expected goals were so low.

Another reason for the lopsided scoreline was Hoffenheim’s lack of organization both in and out of possession. The first problem was their defensive organization, which certainly contributed to them having six goals scored on them. 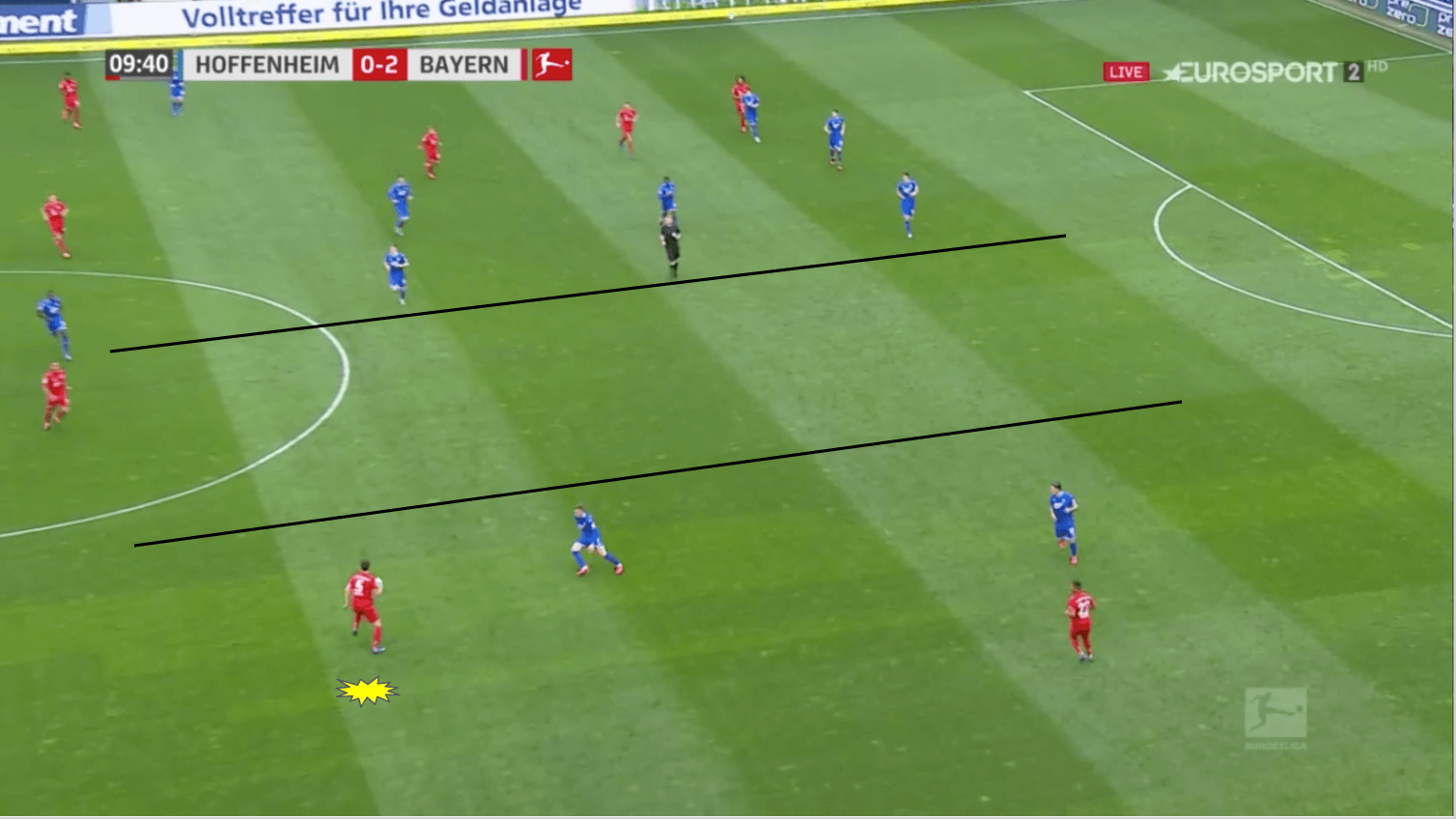 Benjamin Pavard, marked yellow at the bottom of the image, just received the ball from Coutinho on the left side of the pitch. When the ball was travelling, Hoffenheim failed to shift over in a timely manner, which is a fairly typical expectation for a professional football club. Not only did their defensive line not switch over, but their midfielders also failed to do so. Even as Pavard played the ball backwards, much to the chagrin of Hansi Flick, the gap between the left side of Hoffenheim’s defence and the rest of it did not shrink. It’s no wonder that Bayern continued to send long balls through the defensive shape because those spaces continued to be available for their exploitation.

Some of Hoffenheim’s struggles likely stemmed from the fact that they only started one true defender. While this wasn’t a result of injuries, it does provide some explanation for this next image. 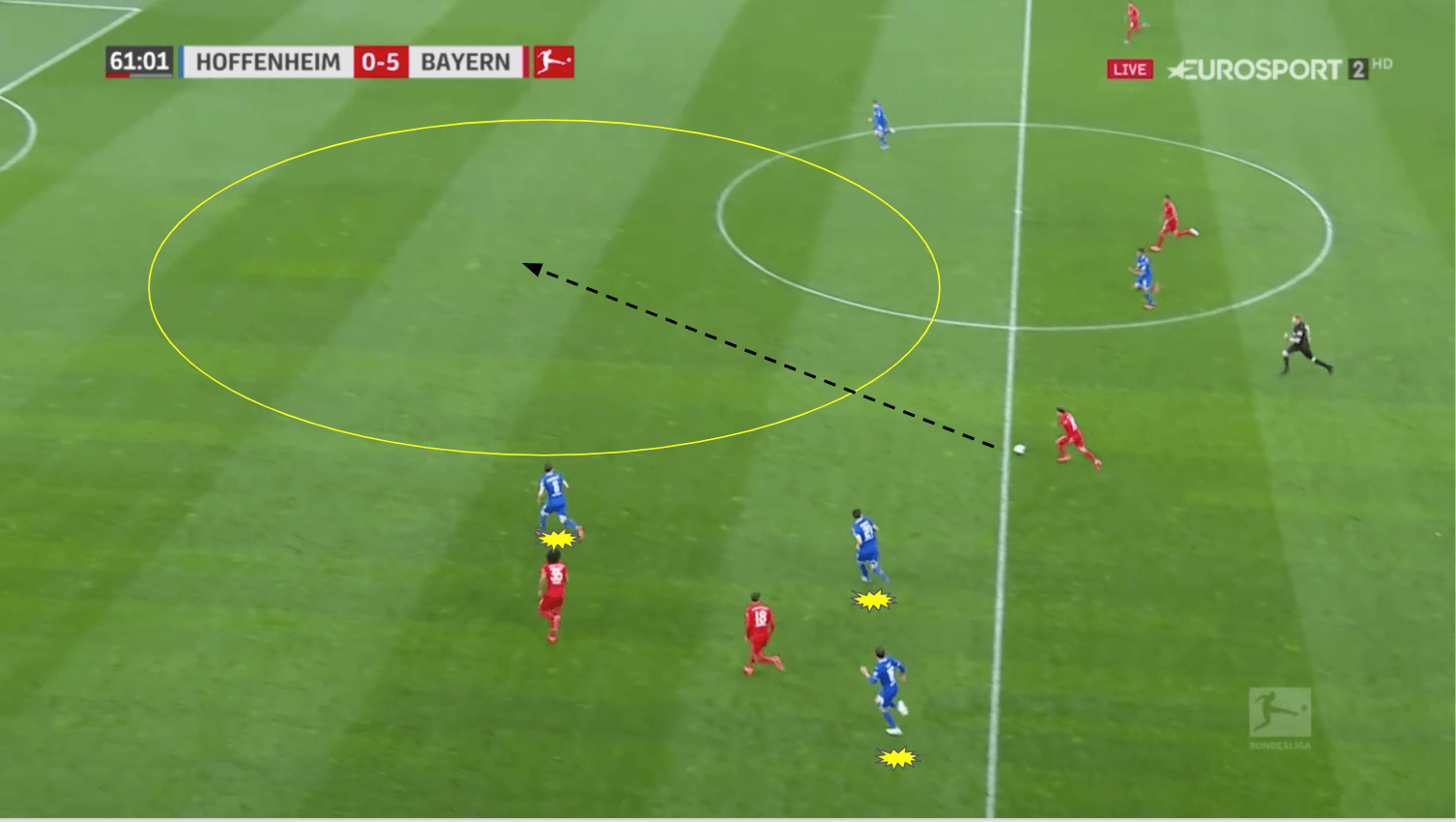 Bayern had successfully drawn Hoffenheim forward with possession in their own half, and then the ball found Coutinho’s feet in space. Three Hoffenheim players had overcommitted to the right side, leaving the centre of the pitch wide open for Coutinho to dribble into. Hoffenheim struggled to reorganize as too many men were out of position, and Leon Goretzka, who subbed on for Thomas Müller in the 56th minute, found the back of the net after an intelligent diagonal run.

There was a need for more organization from Hoffenheim’s buildup as well. The choices they made when trying to play out of the back indicated that players were not entirely sure what their roles should have been, which made mistakes much more likely to occur. 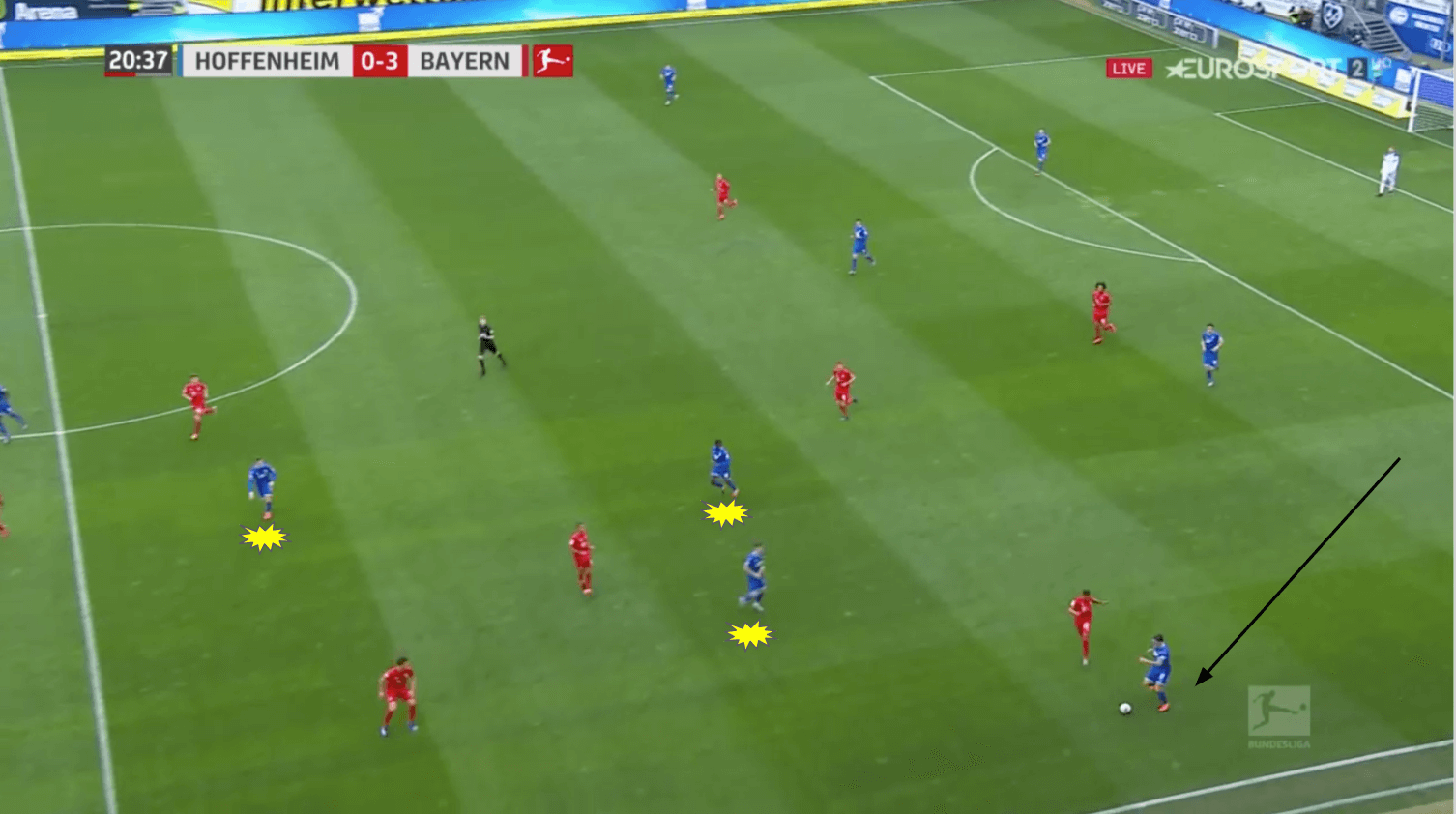 They knew Bayern were setting up to press them when the ball went out wide. This happened multiple times before this moment above. However, as Steven Zuber progresses up the pitch, none of his teammates find an angle of support, particularly out wide. Instead, they’re all behind Bayern defenders, essentially giving Zuber no options. This leads to him dribbling out of bounds and turning the ball over, something that could be entirely avoided if there was some more organization in terms of where players should have been positioned and how they should have moved as a unit when building up from a goal kick.

With their victory, Bayern Munich remains in first place in the Bundesliga, three points ahead of RB Leipzig, who tied Bayern Leverkusen on Sunday. From a rest standpoint, Bayern won’t be too upset with how the match ended, as they have another “English week” with Schalke 04 on Tuesday in the DFB-Pokal quarter-final and then Augsburg on Saturday in the Bundesliga.

Hoffenheim won’t be happy with their performance, and they’ll need to do some analysis to get back on track next weekend when they take on Schalke on Saturday. A win then could see them possibly vault past Wolfsburg and Schalke into sixth place, which would be good enough for some European football next season, provided they maintain that position for the rest of the campaign.