Over the past few seasons, one-time Champions League club Hoffenheim has had a revolution of academy players making their mark on the first team or thrive elsewhere. This was prominent in the Julian Nagelsmann era, where a fresh approach and emphasis on blooding academy players for regular first-team action was paramount.

One player reaping the rewards of Nagelsmann’s tutorage and thriving in another environment is 21-year old attacking winger Robin Hack. Hack joined Nürnberg for €500k at the start of this season after making just three appearances in three seasons with Hoffenheim. It’s been one of the bargain buys of the 2. Bundesliga this season.

This scout report and tactical analysis dives into Hack’s playing abilities and how he has fit into the tactical set-up at Nürnberg.

Hack’s first season out of Hoffenheim has been chaotic at best. The trainer of choice at the start of the season Damir Canadi lasted all but 13 games before being dethroned for Jens Keller. Under Canadi, Nürnberg played a 5-3-2 or a 3-4-3 formation with Hack playing as a centre-forward alongside Mikael Ishak or as the left-winger in an attacking three. 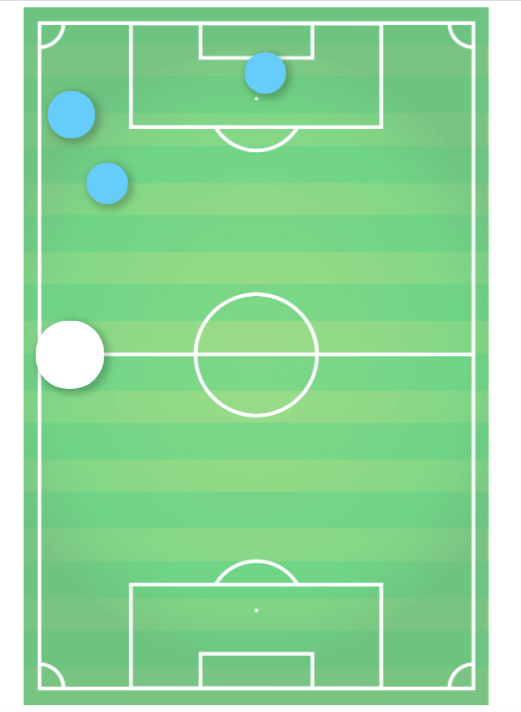 As shown above, Hack is an inverted left winger/midfielder at heart but can play as a striker when required. If you go back to his Bundesliga debut against Freiburg, Hack started as a striker and scored on his debut before being substituted after just 41 minutes due to injury. Hack has played right-wing and as a secondary striker and is at his most effective in the final third. 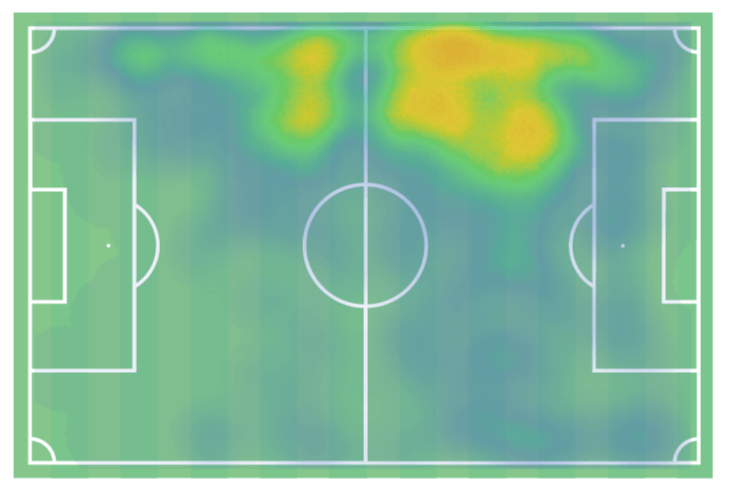 The heat-map from the 2019/20 season so far showcases the intensive work Hack provides on the left-hand side. Continually working to provide an option out wide and an outlet before delivering a pass. There are patches of blue within the final third in a more central area. As Nürnberg attack, Hack moves into a more central position to allow overlapping runs from left-back Tim Handwerker. 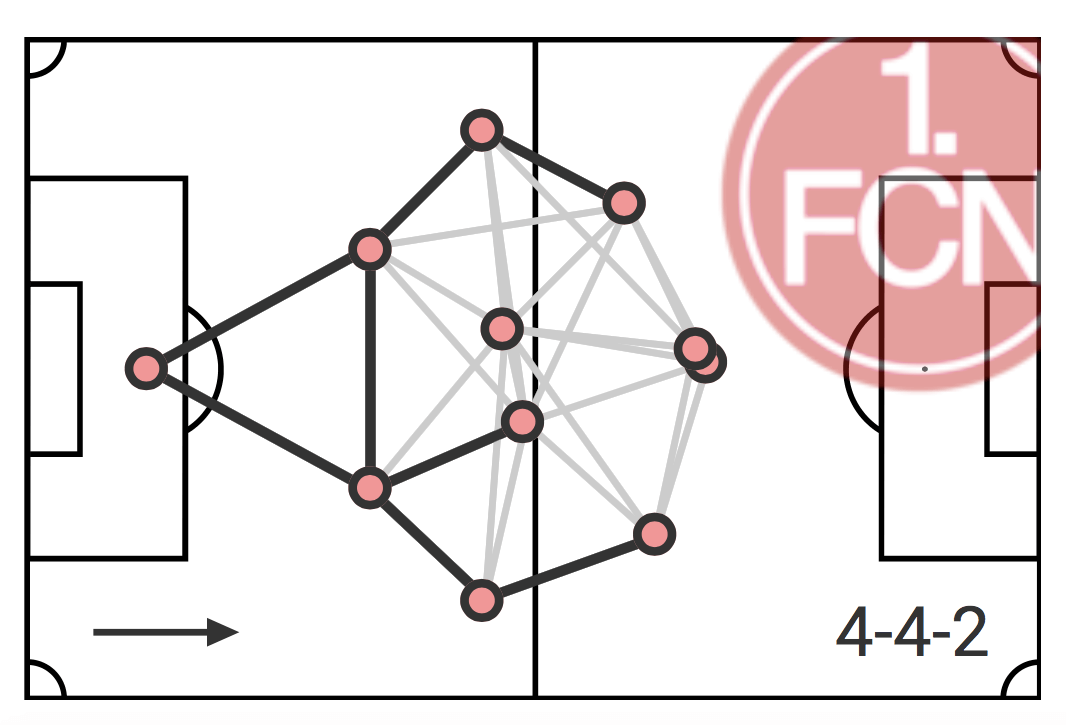 As mentioned before, Keller is currently the man at the helm and Nürnberg now play a 4-4-2 with the occasional 4-2-3-1 tactics used. Hack has been a regular feature in the line-up since the appointment of Keller and has missed only two games due to injury and suspension. Otherwise a consistent 90-minute performer.

An aspect of Hack’s game which he tries to exploit continuously is his dribbling ability. Hack is a competent player with the ball at feet, completing 5.46 dribbles per 90-minutes. This ranks Hack 10th amongst all midfielders in the 2. Bundesliga. St. Pauli’s Christopher Conteh leads with 7.42. With a knack for taking on his opponents, Hack has become a reliable source for starting quick and intensive attacks. With that in mind, let’s look at some of the situations we will see Hack take on in the game using his dribbling. 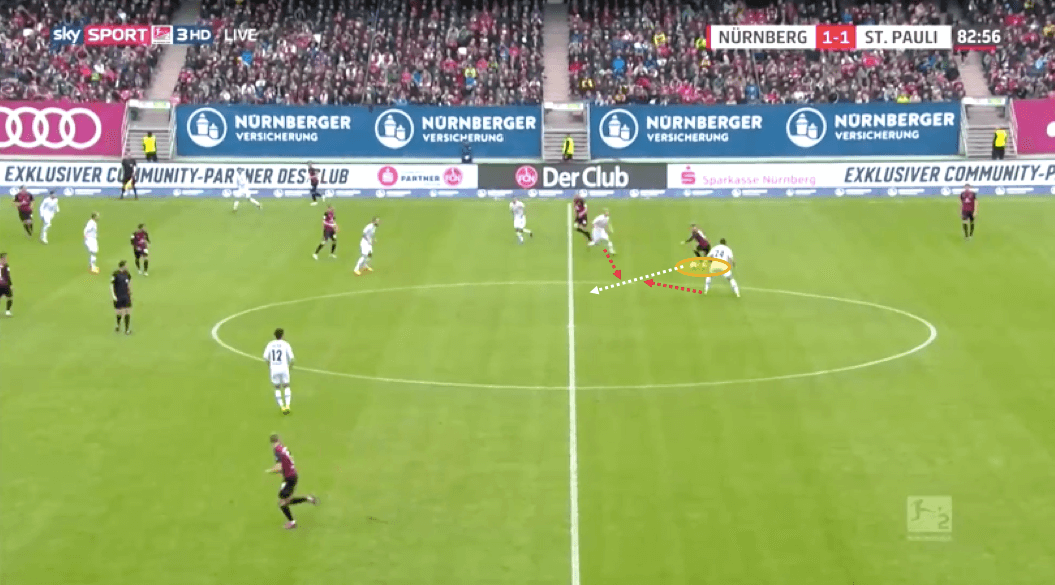 Our first example against St. Pauli showcases Hack’s fearlessness in taking the game on when required. Hack can be seen as single-minded at times; if space is there, Hack will take it even if the pressure is on. Despite the two St. Pauli players closing the gap in-front, Hack drives forward with intent of taking the space in the middle of the park before assessing his options. 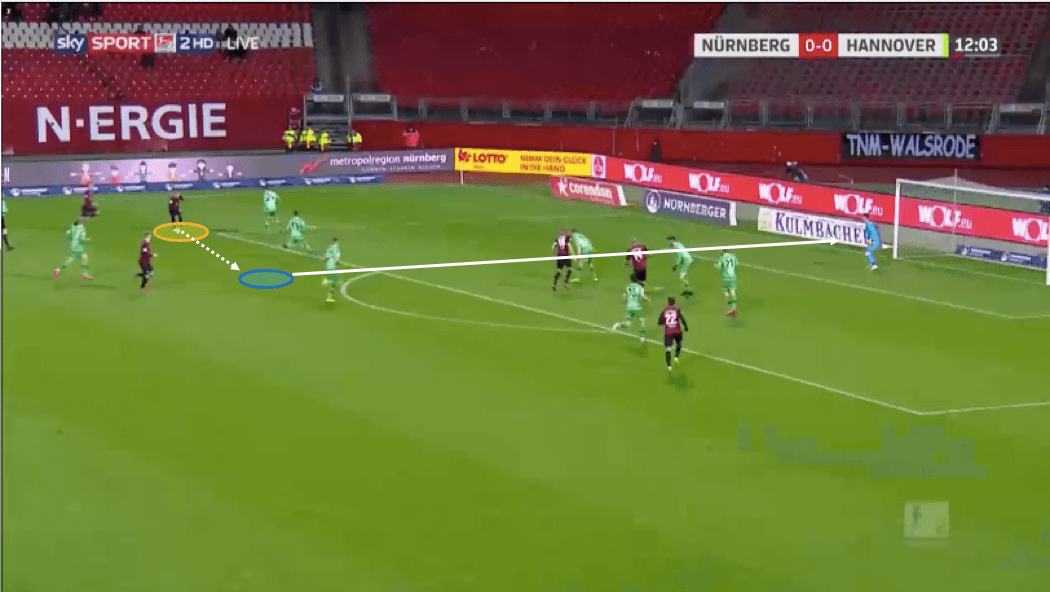 Hack also possesses a small fingerprint of Arjen Robben DNA. Former Bayern Munich winger Robben is infamous for driving forward to the edge of the area before cutting onto his left and shooting. Hack, while not at Robben’s level, does have the attributes to pull off such technical skill and quickness with the ball on the left flank cutting onto his right foot. In an example against Hannover, we see this in motion. As Sebastian Jung tries to stop Hack from cutting inside, Hack uses his quickness to evade Jung and cut onto his right side. As Hack penetrates and the defence falls back, Hack shoots and forces the save out of Ron-Robert Zieler. This art is still a work in progress for Hack and one he should continue to develop. 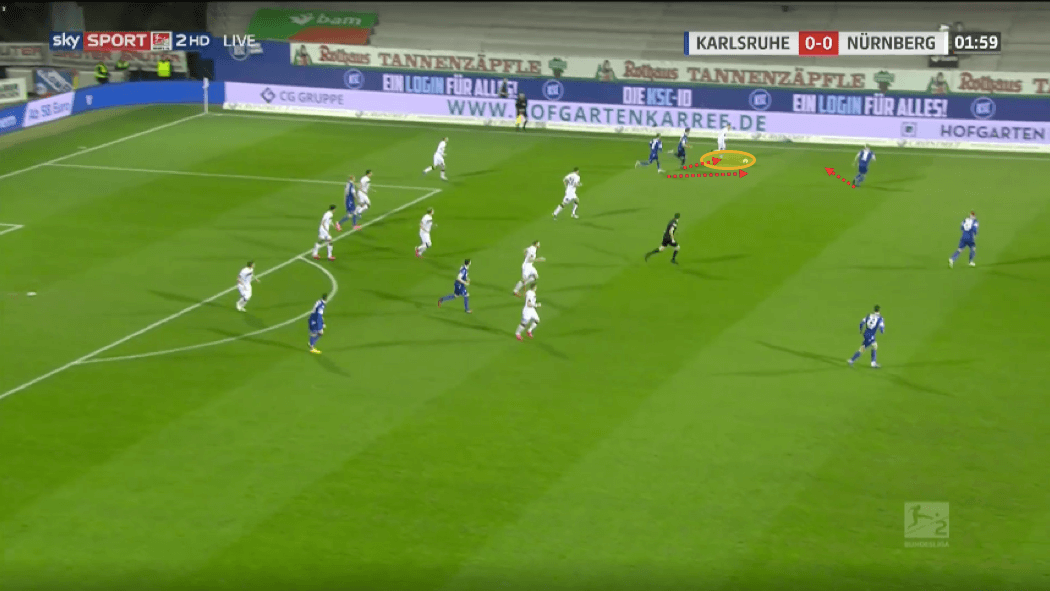 We’ve spoken about Hack’s ability to take the game on with the ball and his knack for cutting inside. However, Hack does suffer from inconsistencies and poor decision making which can hurt his team at times. An example of this came against Karlsruhe, two weeks before the season stopped. In this game, Hack went 0 of 8 in dribbles attempted, and the above image shows a critical deficiency. Nürnberg has defended a corner and is now looking for a way out, Hack is on the ball with two Karlsruhe players in close quarters. A third player is corralling Hack towards the touchline. Unlike the first instance where there is space to exploit, Hack backs his abilities to get out of this situation. It doesn’t work as Karlsruhe dispossess Hack and re-enter their attacking third. Had Hack lifted his head before trying to take on three Karlsruhe players, he would’ve found an option centrally which would’ve allowed Nürnberg to retain possession.

Hack is like a streaky shooter in basketball; some days Hack will be dynamite on the ball and run rings around his opponents. On others, Hack can try to do too much with the ball when the scenario doesn’t require it. As Hack develops and continues to gain regular first-team football, this understanding of knowing when is and when isn’t the right time to dribble should improve.

Hack is one of the focal points going forward and does receive plenty of opportunities to possess the ball. His passing could be considered as underrated and is someone who Keller should look to get more touches going forward. This season, Hack has completed 82.5% of his passes with 26.65 average passes completed per 90. When considering Hack is comparable with Bochum’s Danny Blum and Hannover’s Linton Maina, Hack is very much around the mark. This part of the analysis looks at the common situations we will see Hack in when playing a pass. 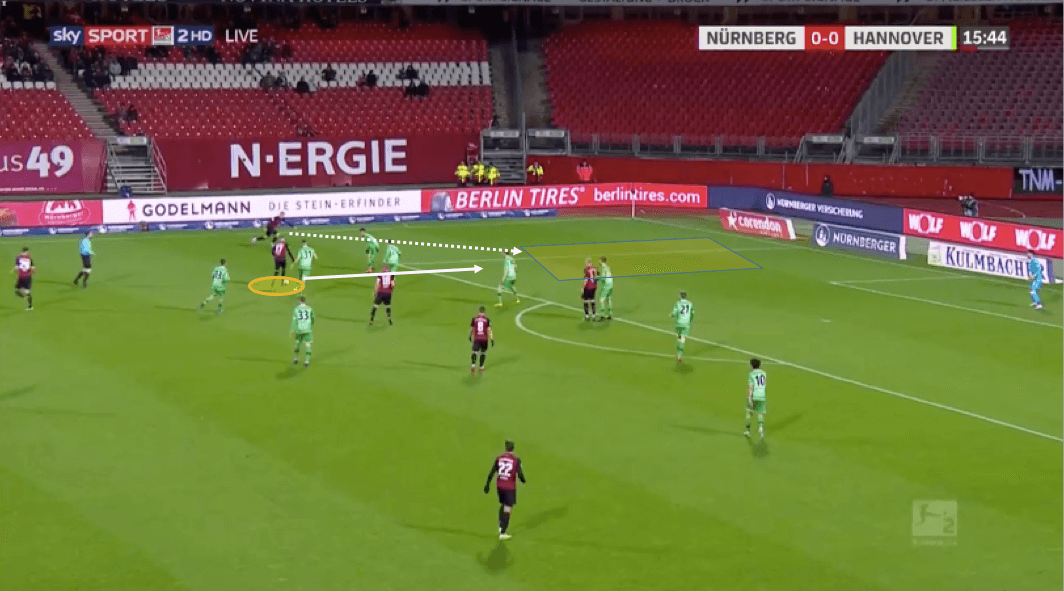 We mentioned previously that Hack in the final third would be in a more centralised position to allow the full-back to come overlap. In this scenario against Hannover, we see this situation in action. With Hack garnering the attention of three Hannover players, this allows Handwerker to penetrate the spaces behind the defence. Hack needs to be precise in this situation to ensure the pass is not picked off and also weighted so that it doesn’t go out of play. The pass leads to a further attack as Hack makes a beautiful pass which puts Nürnberg into a dangerous attacking situation. 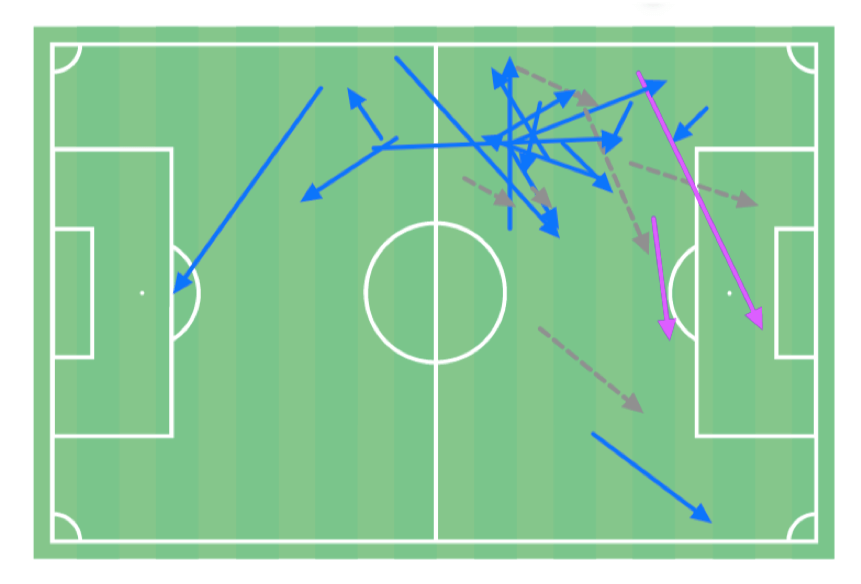 The pass map above is from the game against Karlsruhe where Hack went 18 of 24. Far from his best in terms of passing but we can see hack looks to be very progressive with his passes, especially going forward. Two key passes were completed in this encounter with one which should’ve led to a goal. In most cases, Hack will play the ball laterally to one of the central midfielders pushing up or diagonal to a target man. 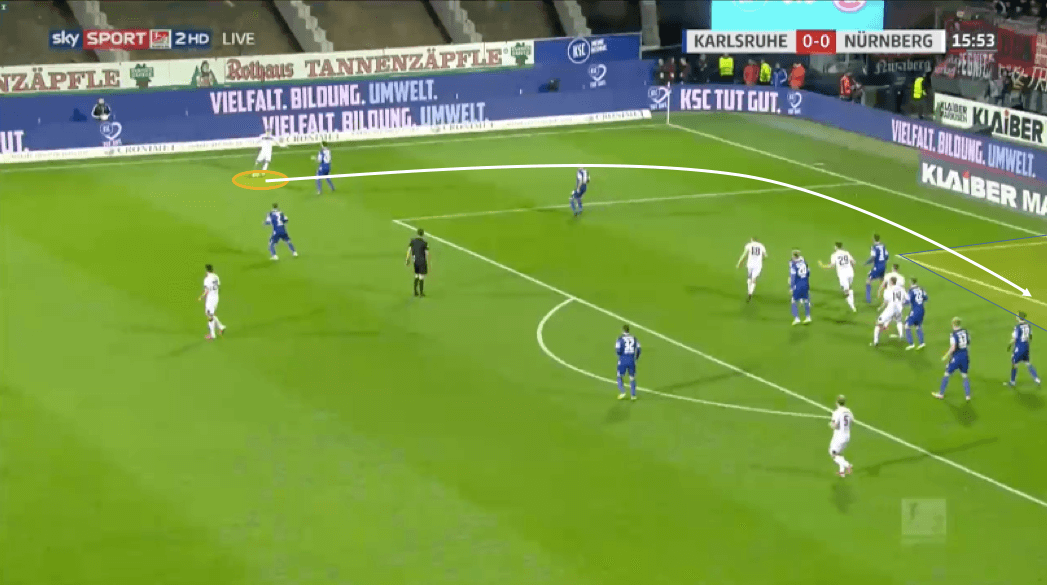 Hack only has the one assist to his name; however, it could be more had some of his teammates managed to put their efforts on target. A prime example in the Karlsruhe game we spoke about before. Although a tight situation, Hack puts in a teasing cross to the back post and inside the six-yard box. These can be difficult crosses to read for the goal-keeper who in this situation remains on his line. Georg Margreitter is the guilty party, despite beating his opponent he heads the ball over. Despite this, Hack hasn’t been one for crosses this season, attempting just 1.15 at a completion percentage of only 23. 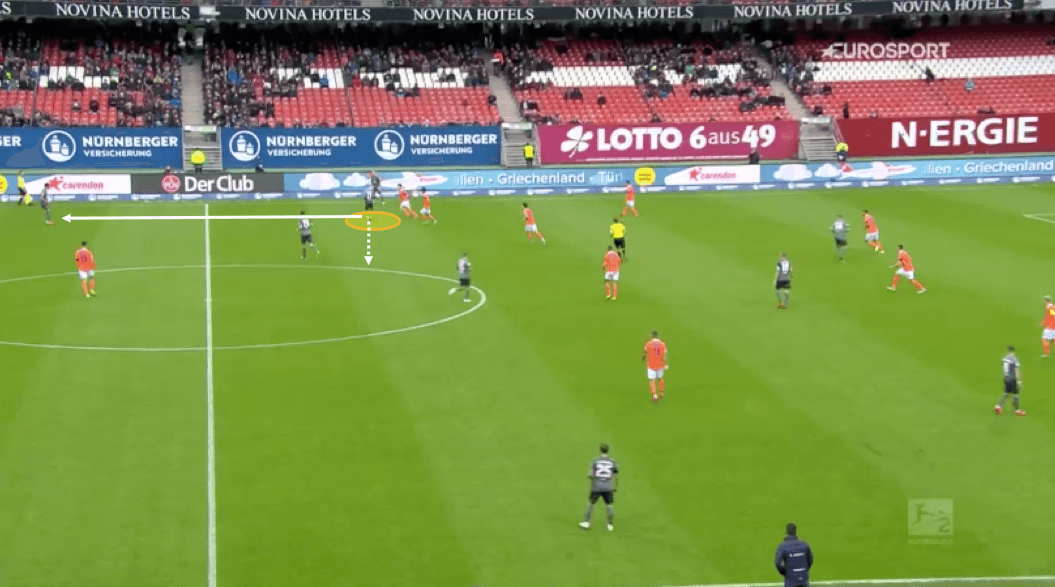 But what about in build-up situation when Hack drops into a less attacking area? In the game against Darmstadt, we do see Hack in a scenario where he plays the ball back to keep possession. His immediate off the ball movement after moving possession on is to move centrally. This allows Nürnberg to retain the ball, and with Hack moving into a central position, this could provide a potential outlet when the ball is recycled.

Finding his appetite for goal

In junior football, Hack had an excellent goal-scoring record. From his time with Hoffenheim’s U17 and U19, Hack scored 42 in 72 appearances which led to his promotion to the first team. Hack has managed to bring that impressive record to the 2. Bundesliga with seven goals in 23 appearances this season. This ranks Hack 3rd in goals scored amongst midfielders in the league with Blum from Bochum leading with nine.

The first goal we’ll look at comes against Dynamo Dresden. What we are looking for is Hack’s reading of the play, off-the-ball movement, and finishing. Immediately, we can see Hack is in a favourable situation. Unmarked and his direct opponent, Jannis Nikolaou has allowed Hack goal-side. Hanno Behrens who had connected with Hack for the opener produces a delicate lobbed-through ball into the highlighted space. Hack is quick to react, gets to the spot and finishes coolly past Kevin Broll. The movement from Hack was excellent as he exploited the area behind the defence. 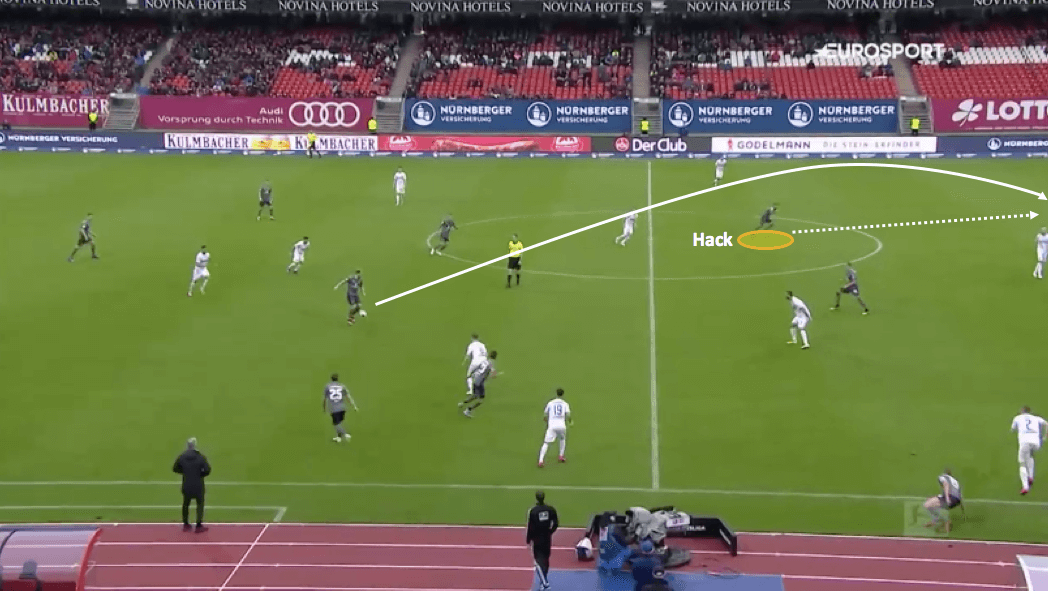 Our last goal is split into two parts, the off-the-ball run, which leads to the situation and the goal itself. Johannes Geis has possession, and we can see the space between the Sandhausen defence is significant. Hack is quick to recognise this and makes a smart play to take advantage of the vacated space. 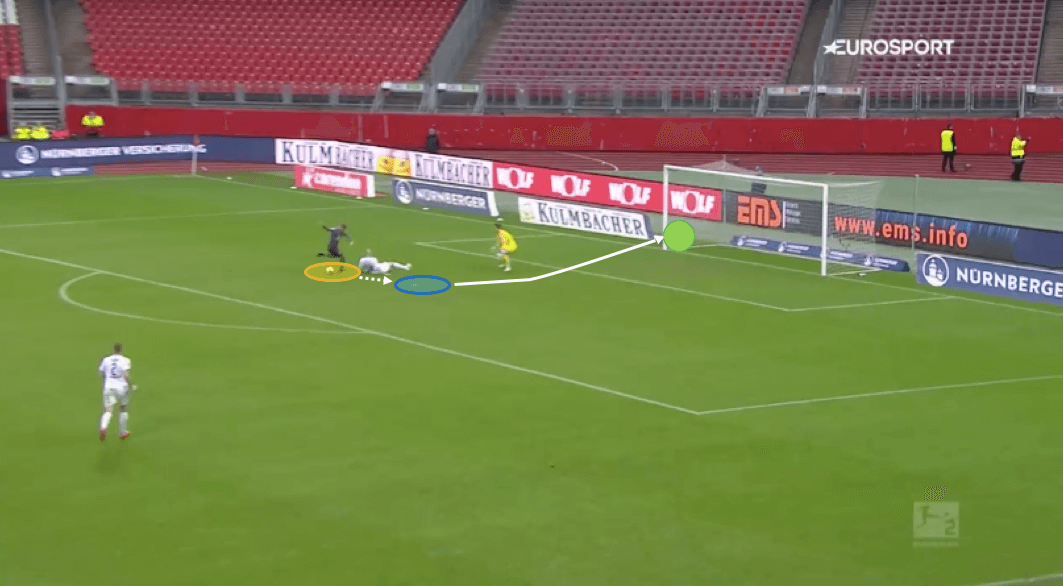 Geis produces a piercing through ball, and now Hack has a chance to score. Gerrit Nauber looks to force Hack to remain on his left, but an excellent piece of trickery sees Hack leave Nauber on the ground. Hack then produces a powerful effort which beats Sandhausen shot-stopper Martin Fraisl. The scoring touch from Hack has been vital this season. He has seven of Nürnberg’s 34 league goals, without his contribution, Der Club‘s already difficult predicament would be far worse.

Nürnberg hasn’t had many bright points this season, but the signing of Hack has certainly been one. After a baptism of fire, Hack has come alive becoming one of Nürnberg’s most essential players. Hack has proven to be effective using the ball and is someone who can liven up the game whilst providing the goal-scoring edge Nürnberg has craved for. The Pforzheim native has an abundance of talent; the question will be, can he be consistent over the journey.

Pierre-Emile Højbjerg is a Danish central midfielder, currently playing for his national team and in the Premier League with Tottenham […]

We’re already one month and four games into the 2022 MLS season and with the international break, it’s a good […]