Heidenheim are one of those clubs who continuously overachieve in the 2. Bundesliga. Year-by-year, the Baden-Württemberg side find ways to exceed expectations, and this season is no exception. What the club has done well over the last few seasons is recruit well and sell for a profit. Robert Glatzel (Cardiff), Nikola Dovedan (Nürnberg) and Robert Andrich (Union Berlin) are three players who joined Heidenheim, improved significantly before moving on prior to this season.

One player who has been a massive win for Heidenheim over the last couple of the seasons is Niklas Dorsch. The 22-year-old came on a free from Champions League heavyweights Bayern Munich back in 2018 and has been a critical figurehead for Heidenheim. 53 2. Bundesliga appearances in 18 months have people talking up Dorsch as a potential Bundesliga option for next season.

This scout report and tactical analysis looks at Dorsch, how he has fit into the Heidenheim tactics and what are his tangible assets.

Dorsch is an integral part of the engine room for Heidenheim, someone who can play several different roles when asked. Heidenheim manager Frank Schmidt has used Dorsch primarily as a number six or a number eight depending on the opponent. For example, when Heidenheim played Stuttgart, Schmidt implemented a 4-4-2 with Dorsch partnering Sebastian Griesbeck. This combination has worked well this season.

As the table above shows, when Dorsch plays as a number eight alongside Griesbeck the 4-4-2 formation is the preferred. In many cases, you will see Griesbeck pushing further forward while Dorsch will drop back as the facilitator to start the build-up play. This is also the case when Heidenheim play in a 4-4-1-1, Dorsch is vital in beginning periods of possession.

Dorsch is also comfortable playing as the isolated number six, a role that he has thrived in since joining Heidenheim. The most commonly used formation this season with Dorsch playing as a six is the 4-3-1-2. In this formation situation, Dorsch does have protection in front with Griesbeck and Konstantin Kerschbaumer the support in front as number eights. The number eights play quite narrow, for Heidenheim full-backs Marnon Busch and either Norman Theuerkauf or Jonas Föhrenbach need to create the wide options long for Dorsch. This formation also lends to the importance of the strikers providing more extensive opportunities with the lack of wingers.

Heidenheim have several uses for Dorsch in either formation’s featuring two central midfielders or a solitary number six. Dorsch can play many roles for Schmidt if required. The importance of giving Dorsch plenty of touches within the build-up play is essential as he is Heidenheim’s best facilitator going forward.

It’s ever so crucial for defensive midfielders to be superb on the ball, one who knows when to pull the trigger on a piercing ball forward to playing the simple ball backwards. Dorsch is supreme when it comes to ball usage; this season Dorsch has completed 88.1% of passes which ranks 4th amongst defensive midfielders while completing an average of 50.23 per game. Manuel Preitl of Arminia Bielefeld leads this category at 91%. 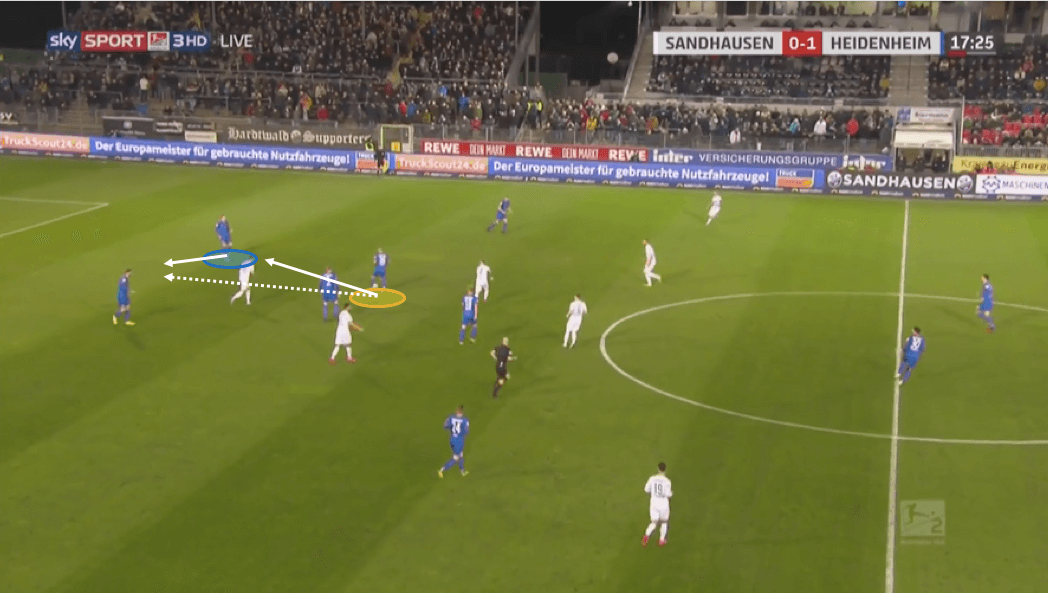 Dorsch’s high IQ play, on and off the ball movements are vital in Heidenheim retaining and creating opportunities with possession. In the scenario above vs Sandhausen, we see Dorsch facing his own goal. Oliver Hüsing is the option in front of him, and that’s where the 22-year old plays to. His immediate movement after disposing of possession is to drop into the hole between centre-backs Hüsing and Patrick Mainka. This allows Dorsch to be an instant sideways option for Hüsing as the Sandhausen begins to drop deeper towards half-way. 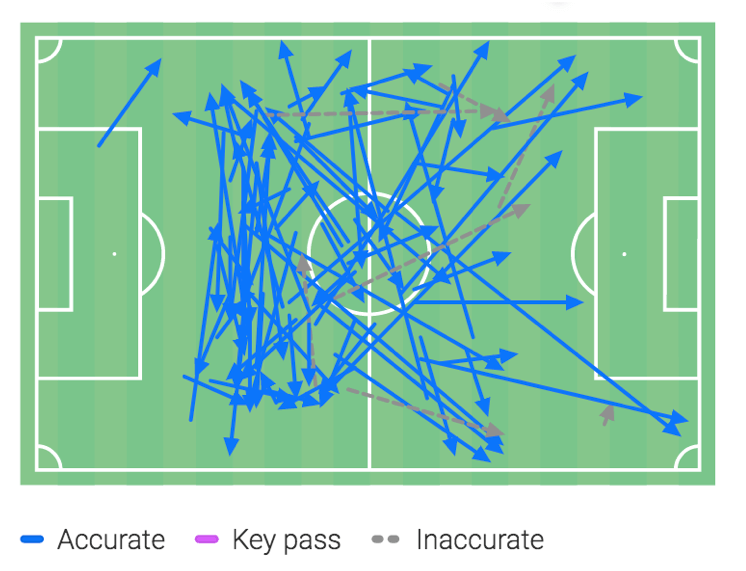 Unlike another promising young defensive midfielder in Adrian Fein, Dorsch is far more progressive going forward. The pass map above in Heidenheim’s 0-0 draw against Wehen Wiesbaden showcases the number of lateral and diagonal passes used by Dorsch. Dorsch completed 92% of his passes, attempting a season-high 86 with 79 finding the target. A common theme developing with Dorsch is the number of lateral and diagonal passes taken. In several situations, Dorsch faces, the full-backs in Heidenheim’s system will look to spread and attack the space going forward. When the opportunity arises, Dorsch can pull the trigger with precise accuracy. 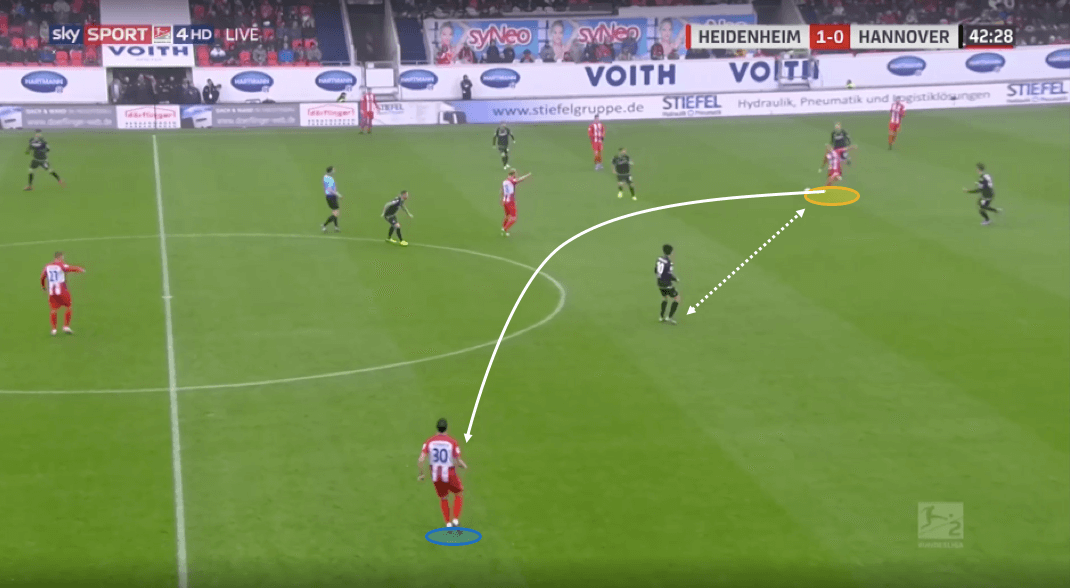 As shown here in the 4-0 win over Hannover, Dorsch will find himself deep in the defensive third. As mentioned, Dorsch will drop deep to collect and recharge Heidenheim’s offensive approach. As Theurkauf exploits the space out wide left by the Hannover winger, Dorsch who has completed 60.5% of long-passes this season finds the left-back in space and with the ability to attack.

Managers will emphasis the importance of winning your one-on-one battles; winning your match-up can help the team going forward in achieving its goals. Two aspects of the individual battle we intently look as defending as well as dribbling. The dribbling aspect mightn’t seem important, but the ability to outwit your opponent and maintain possession is vital. This also goes for the defence aspect, being able to win possession back as it’s extraordinarily difficult to win without the ball. In this section of the analysis, we will look at Dorsch in a one-on-one situation, both going forward and attempting to gain possession back. 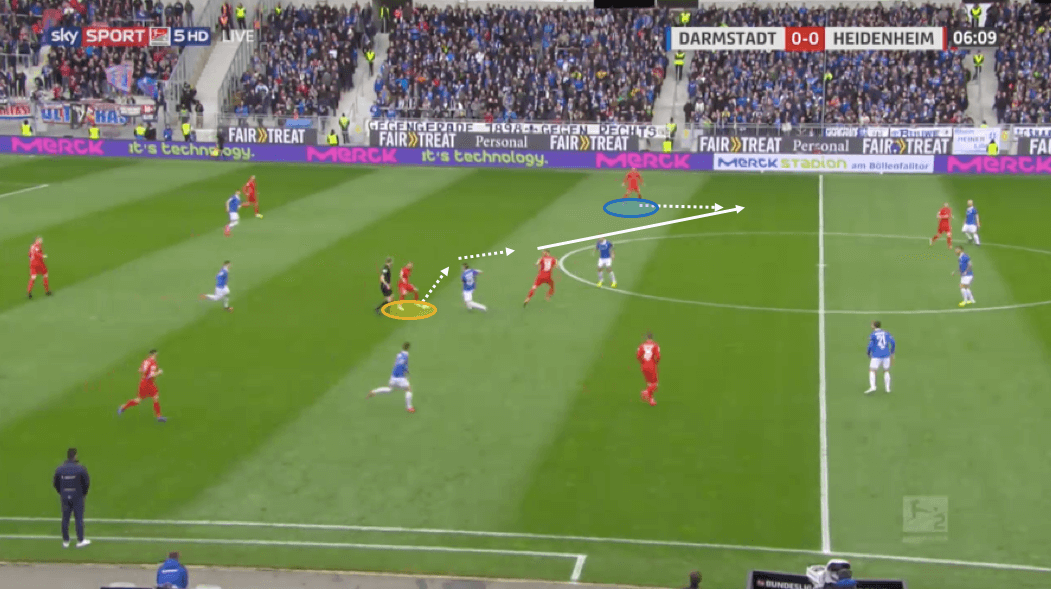 We’ll look at Dorsch in 1v1 dribbling situations first, throughout his career the native of Lichtenfels has won 76.7% of these scenarios. This is done with a variety of different moves and great use of his feet to dispose of his opponent. In this situation against Darmstadt, Dorsch is confronted by Yannick Stark. The pass out wide Föhrenbach is there from the outset; however, the issue could see Darmstadt able to recover. Dorsch pulls off a quick shimmy taking Stark out of the picture before playing a piercing diagonal to Föhrenbach in stride. 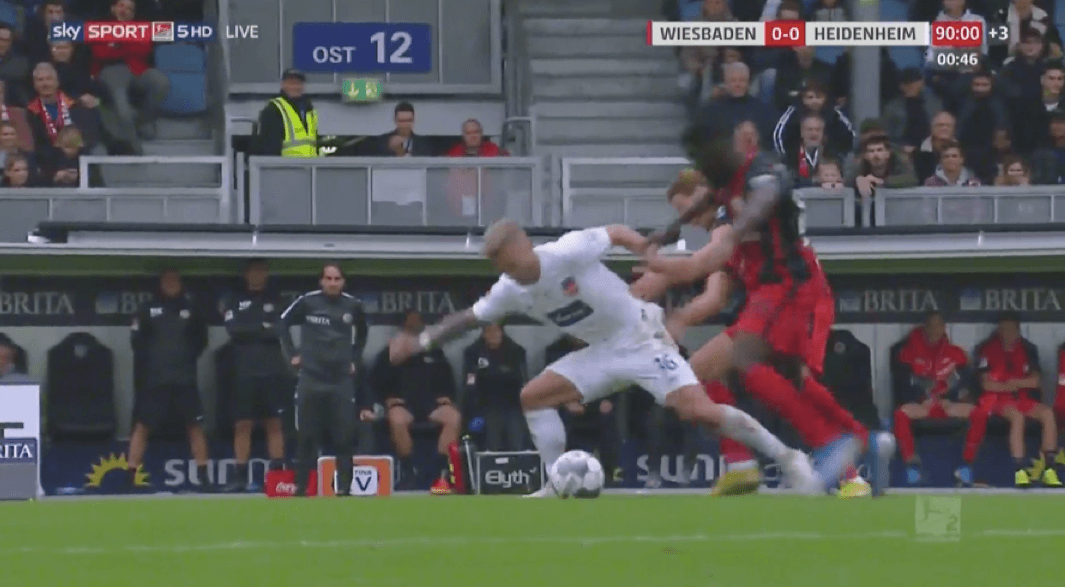 An aspect of Dorsch’s dribbling and ball-handling is his ability to hold possession. The example above against Wehen Wiesbaden showcases Dorsch’s incredible strength to keep possession and get out of trouble. With two players draped all over him, Dorsch can protect the ball and finds a window before eventually drawing the foul. Dorsch is well balanced in most situations and doesn’t lose possession quickly as the above example showcases.

Dorsch has showcased a strong ability with ball at his feet, but how about his ability to win the ball back? This season, Dorsch has gained 49.3% of all duels which is serviceable without being excellent. His numbers do decrease due to his lack of ability in the air, which we will touch on shortly. On the ground, Dorsch is quick and decisive when making a play to win possession back as these examples will show. 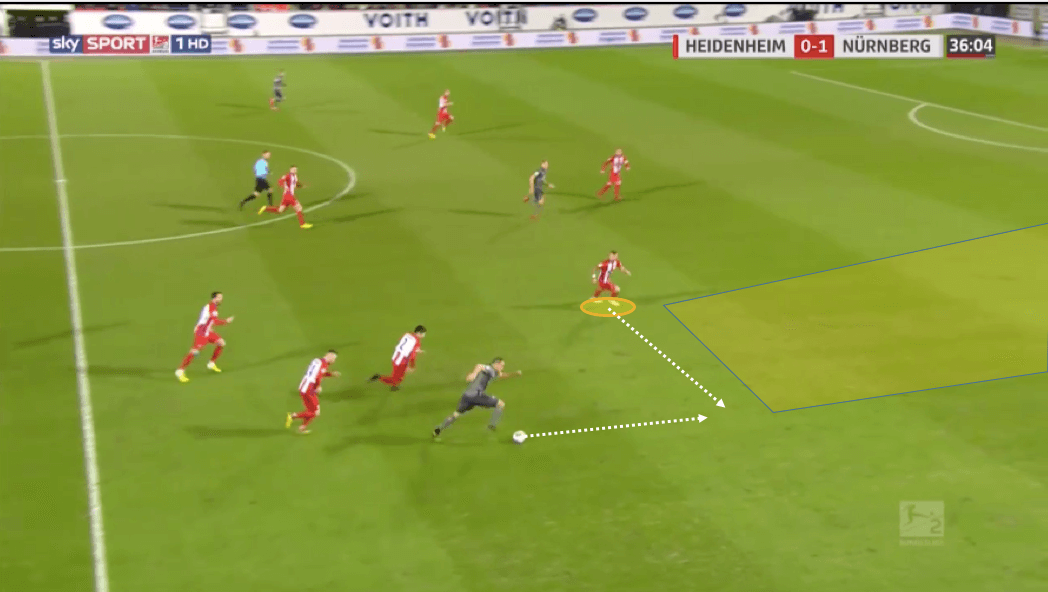 The first situation against Nürnberg showcases Dorsch’s quickness to cut down the angle before making the pivotal challenge. With Michael Frey beating multiple Heidenheim players and the full-back out of position, Dorsch is forced to either cover the positional gap or make a play on the ball. Failure to win possession opens up Heidenheim drastically. Dorsch is fantastic in this situation, cutting down the angle and forcing Frey to hug the touchline. In a split second, Dorsch dispossesses Frey and Heidenheim can go forward. 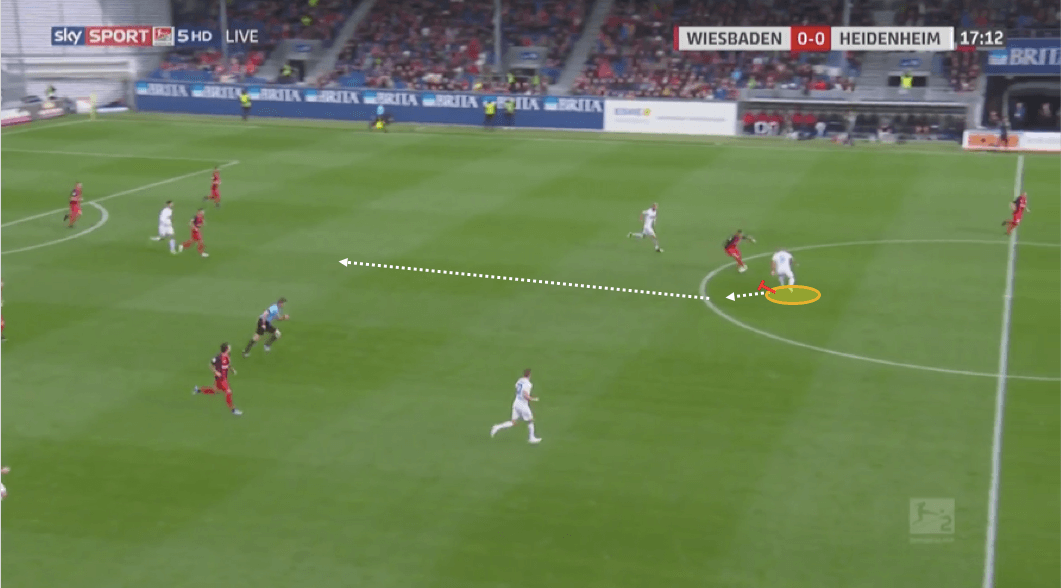 This final scenario showcases how Dorsch can turn defence into attack. As Wiesbaden look to counter, Dorsch is forced into a defensive 1v1 situation. Much like the first example, failure to make a play will allow Wiesbaden to create a dangerous attacking situation. As Manuel Schäffler tries to dribble around, Dorsch sticks a foot out and wins possession. Now with space ahead, Dorsch can drive forward and lead Heidenheim into creating a goal-scoring opportunity.

At ground level, Dorsch is supreme with and without possession. Diligent in trying to win the ball back and understanding when to make a specific play. Dorsch has excellent knowledge and doesn’t try to make a play he isn’t capable of doing.

Dorsch has almost all the skills you want from a defensive midfielder, strong passing game, an excellent dribbler and is versatile. However, there is a chink in the armour that has caused issues for Dorsch throughout the last two seasons. This comes with his play in the air. Since joining Heidenheim, Dorsch has only won 26.9% of aerial duels which is extremely low. 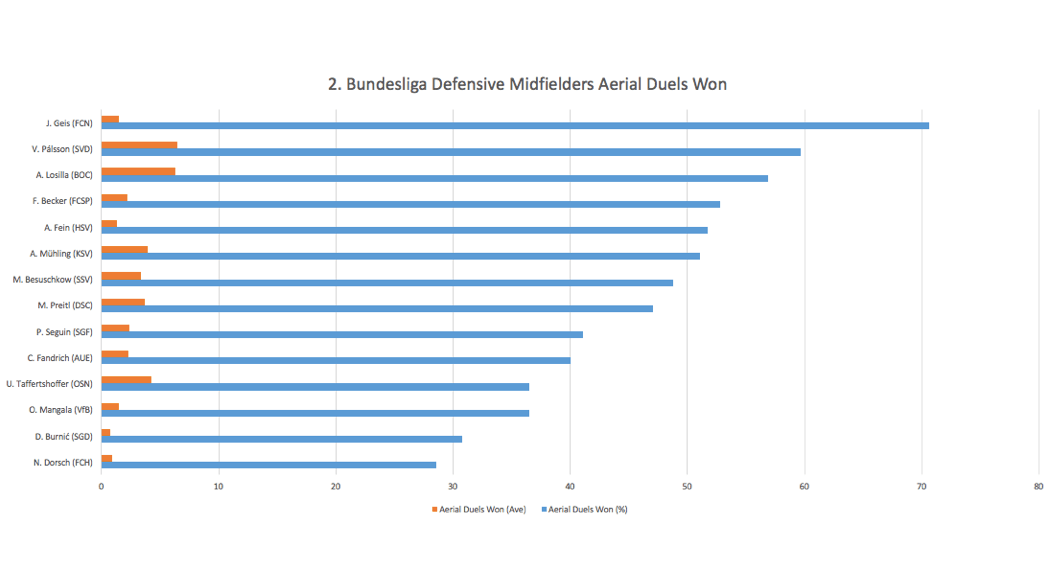 Throughout this season, Dorsch is ranked last in aerial duels won at 28.6% with the second-worst Dzenis Burnić of Dynamo Dresden managing to crack 30.8%. While the statistics are alarming, several factors may suggest it’s not a big issue. The main factor being that Dorsch’s game is more ground-based, winning the ball through interceptions and strong physical play. He wins his duels through those modes rather than in the air. At 178cm, Dorsch is under the average size for a 2. Bundesliga defensive midfielder which is 182cm. 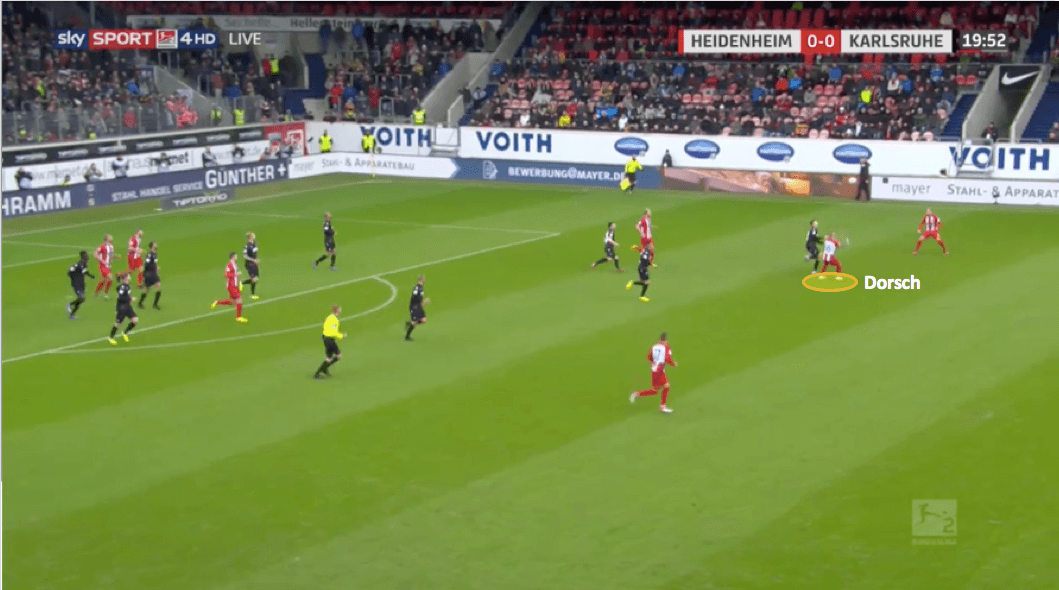 It could also be suggested that Dorsch doesn’t have a substantial vertical leap, as shown above. In a 50-50 situation where Dorsch could use his body to protect the space of the ball drop. Dorsch instead opts to try and win the header. His positioning is weak, and his Karlsruhe opponent can head the ball forward. It’s a minor knock on Dorsch’s game; however, as his career progresses, he will need to be averaging at least 40% in this statistical category.

Heidenheim found a diamond in the rough when they signed Dorsch on a free 18 months ago and potentially one that will pay dividends financially after the 2019/20 season. Dorsch is technically gifted on the ball, is strong in the contest and has a high work rate defensively. While there is the issue with his aerial play, Dorsch is a fantastic ball player and someone who will be highly sort after, come the summer transfer window.