Joaquin Correa has caught the eye in Serie A this season, the forward has taken his game to new heights at Lazio, scoring seven goals and three assists in 22 league appearances, attracting the interest of current runaway Premier League leaders Liverpool.

Correa signed for Lazio from Sevilla in 2018 for a reported fee of £13.77 million, adding to the long line of Argentinian players to have played football at the Stadio Olimpico. Simone Inzaghi clearly sees the potential in the left-winger, who he has usually deployed in the role of a second striker.

The Argentinian has played a total of 3,484 minutes of football in Serie A across two seasons for Lazio, adding 20 goal contributions in this period, which averages one per every 174 minutes played.

In this scout report, we explore the important role which Joaquin Correa plays in Simone Inzaghi’s system at Lazio, examining the Argentinian’s contributions across the defensive, middle and attacking thirds of the pitch, in his role as a second striker through a tactical analysis.

This season Lazio have generally favoured the tactics of a 3-5-2 formation under Inzaghi; the Italian has utilised this shape in 90% of matches in Serie A, in which Joaquin Correa has operated in the role as a second striker, supporting current Capocannoniere Ciro Immobile. 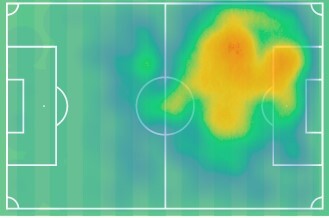 Looking at Joaquin Correa’s heat map, the striker mainly operates from two areas of the pitch – the advanced area of the middle third and the attacking third, favouring a position on the left-hand side of the pitch, which is understandable considering his history as a winger. It is from this area of the pitch that Correa can look to utilise his explosive speed and ability on the ball to isolate opposition or make runs to create space for the likes of Immobile exploit.

The role of a second striker does not carry the burden of a goal scorer, due to acting as a link between midfield and attack. However, at Lazio the burden to score goals holds significant value for Ciro Immobile; the striker has scored 45% of all team goals in Serie A this season, therefore there is a need at Lazio to help the Italian carrying the team. 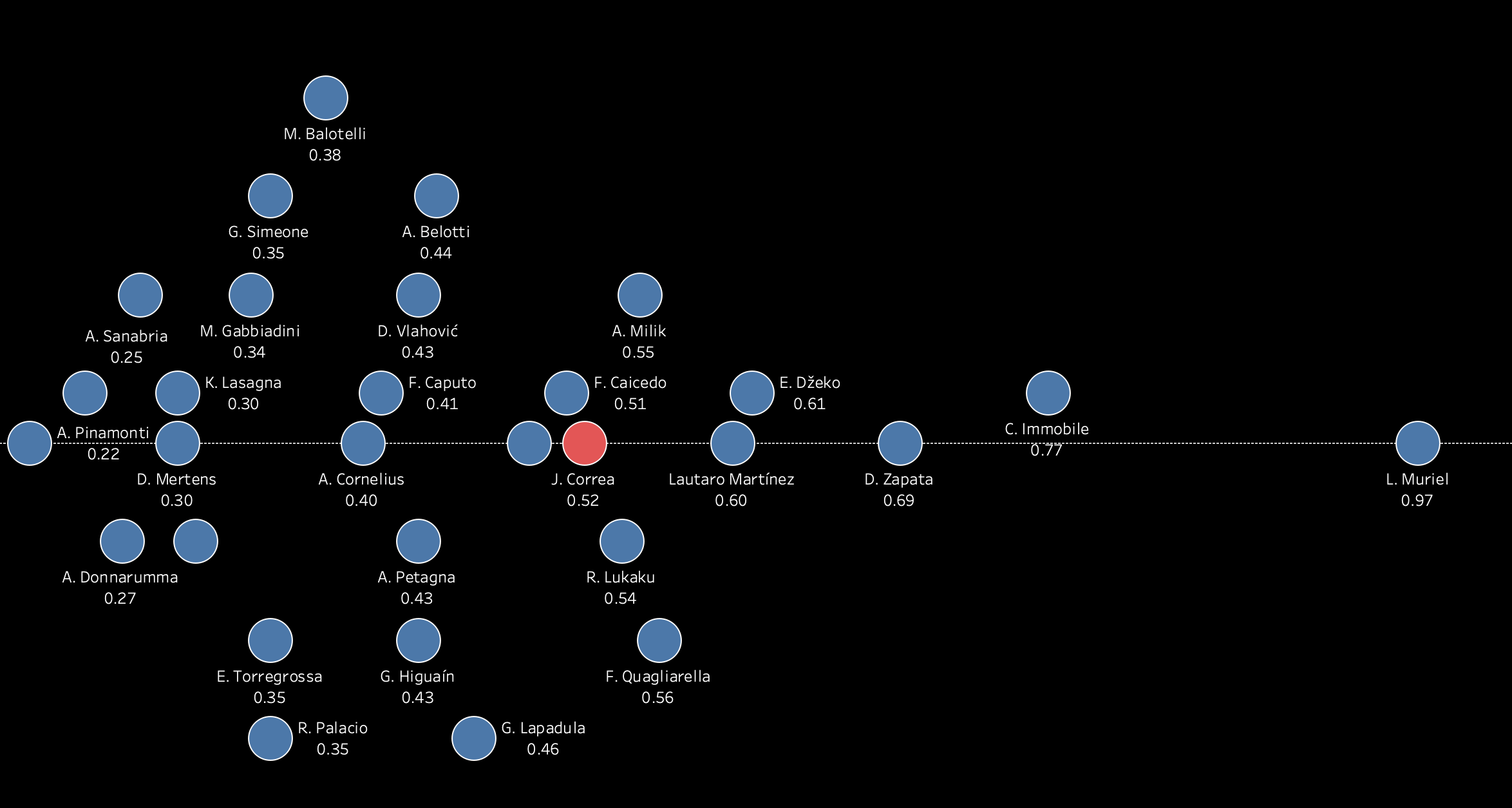 Conducting an analysis into the above data visualisation highlights Correa’s ability to get himself into goal scoring opportunities. The Argentinian sits just outside the top ten of Serie A strikers in terms of his expected goals (xG) value of 0.52 per 90 minutes, crediting his ability to work his way into goal scoring positions. Drilling down a little deeper into Correa’s form in front of goal, you will notice that his xG figure of 9.69 supersedes his actual goals figure (seven) by 2.69, showing that the striker has been unlucky in front of goal and should have had a higher output.

Driving with the ball

There is no doubt that Joaquin Correa is an incredibly gifted and effective player, and the Argentinian always looks confident when isolated in 1v1 situations against a direct opponent.

Correa has an unpredictable nature in possession; this, paired with his electric pace and exceptional balance, gives him all the attributes needed to be an absolute attacking weapon when on form.

In order to show how effective Joaquin Correa is with the ball at his feet, we have conducted the below data analysis, looking at all Serie A forwards who have played over 900 minutes for their clubs. This analysis looks at the key metrics of dribbles per 90 minutes and dribble success rate. 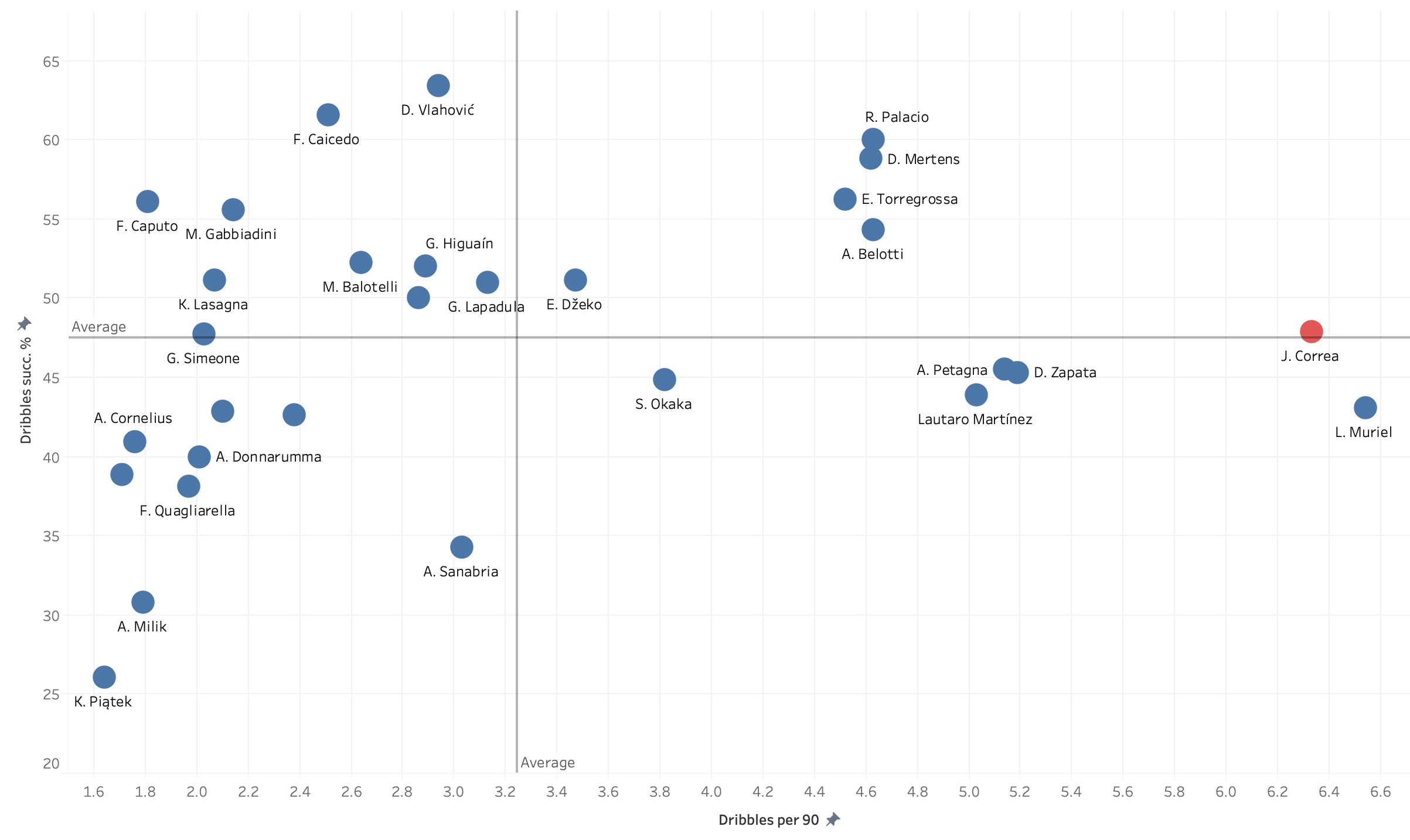 As you can see from the above data visualisation, Joaquin Correa is a clear outlier when comparing the two data sets; he has the second-highest dribbles per 90 output in Serie A at 6.33. The striker is also performing above average in relation to dribble success, which sits at 47.9%.

An example of Joaquin Correa’s ability on the ball can be highlighted in the below images. Firstly, against Inter, Correa receives a pass from Ciro Immobile in the outside vertical channel. Inter are set up in their defensive block, with a defender positioned in each vertical channel unopposed. 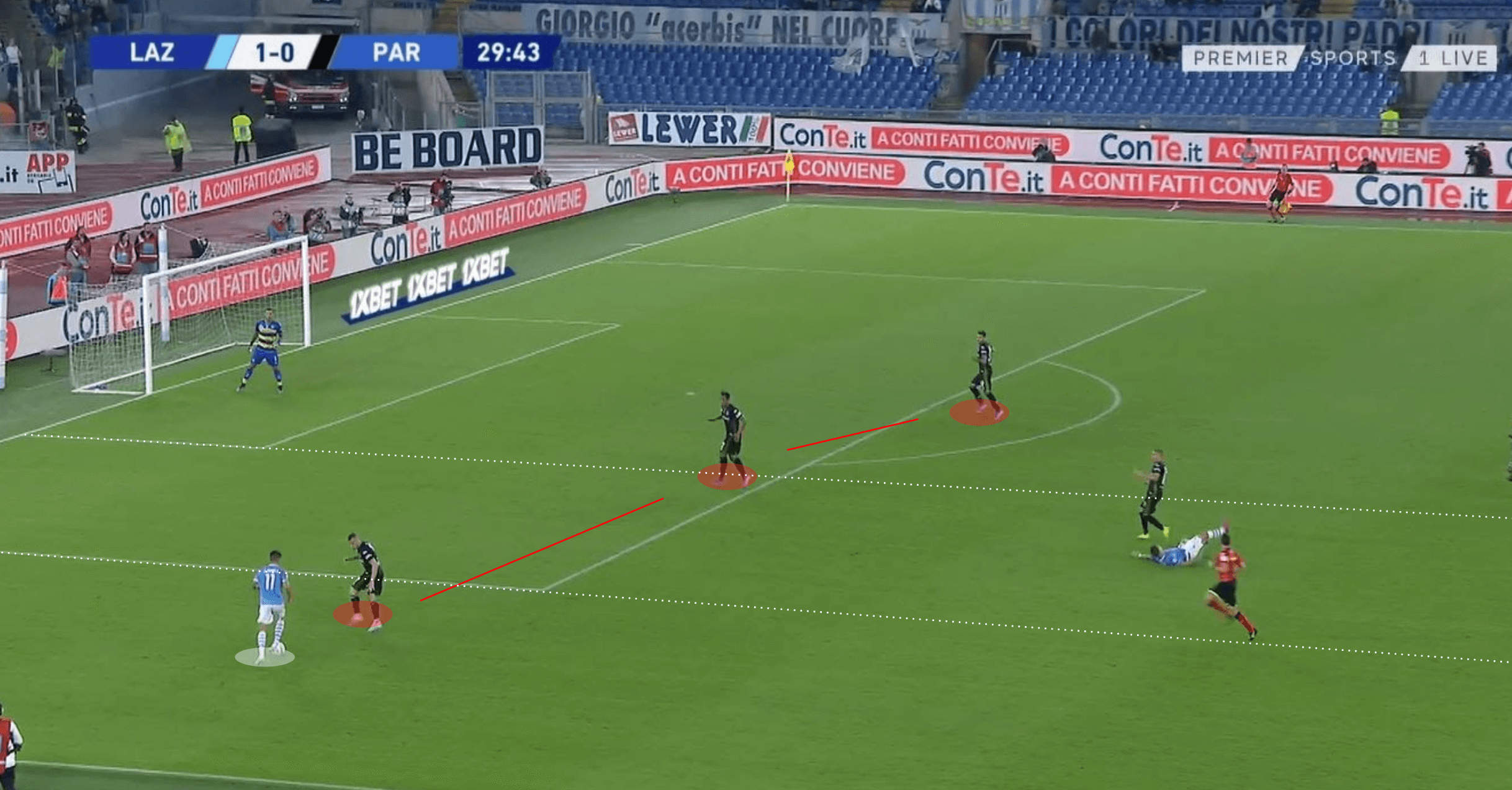 Despite the odds being firmly stacked in the favour of the defence, Correa was able to beat his man by drawing him for a tackle, before shifting his weight and pushing the ball past him, entering the box and advancing to the six-yard box before getting a shot off on goal. 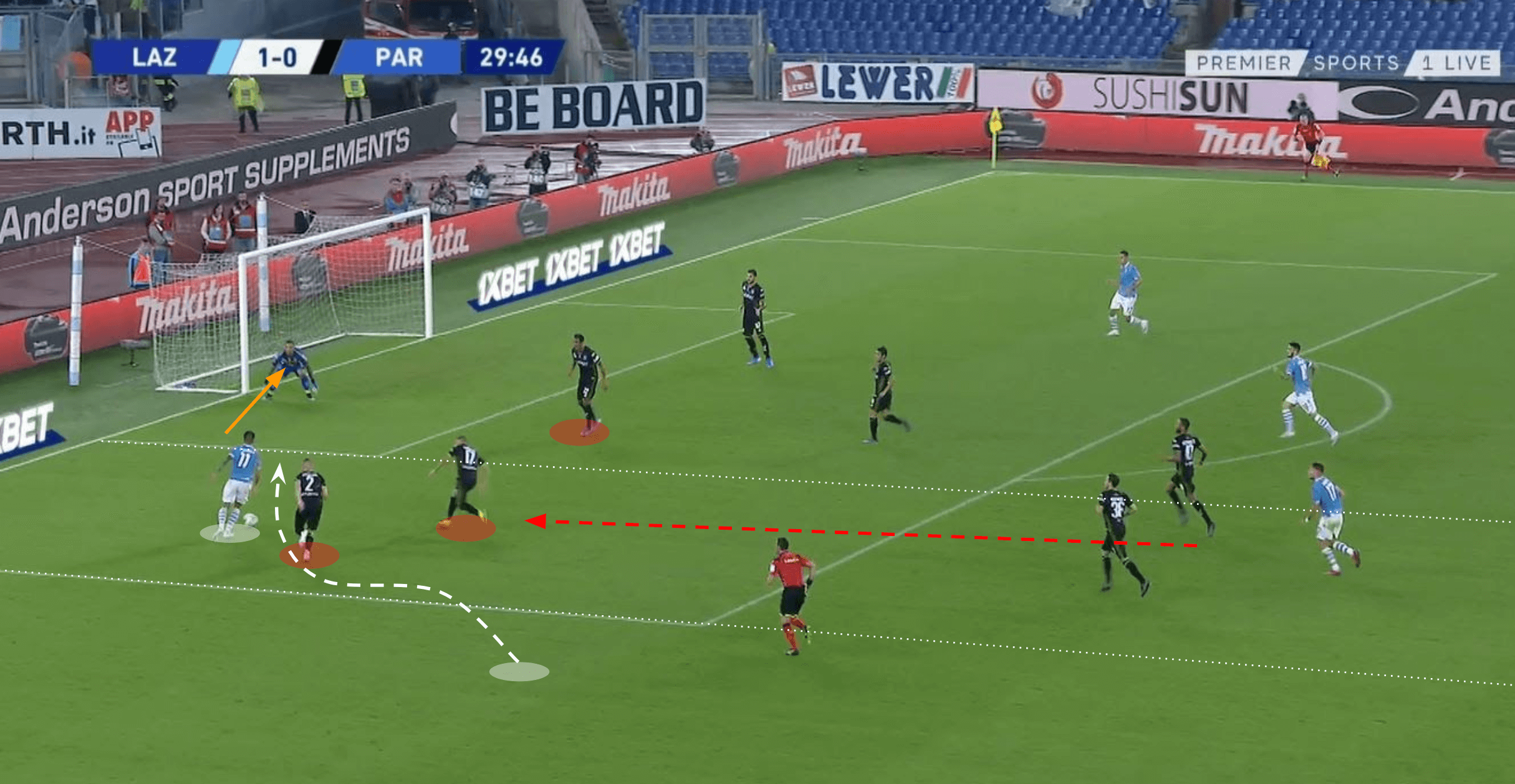 The below example highlights a different impact which Correa has on Inzaghi’s squad where his explosive speed and balance help to progress Lazio into the attacking third through his incisive runs. Lazio have scored seven goals this season from counterattacks, which makes them one of the most feared teams in transition throughout Serie A.

Here against Parma, Correa picked up a second ball within his own half and immediately drove with the ball at the Parma defensive unit with Immobile in support. Due to the mobility of both of the Lazio players, the Parma defence were left with no option other than to back off for the fear of Correa gliding past them, hoping that one of the four players frantically chasing back could commit a professional foul. The striker showed his awareness by playing a perfectly timed pass into the vacant space beyond for his strike partner to attack.

As stated earlier, the role of a second striker often serves the purpose of acting as a link between midfield and attack, and thus players in this position must be able to influence the game having an impact in relation to chance creation. 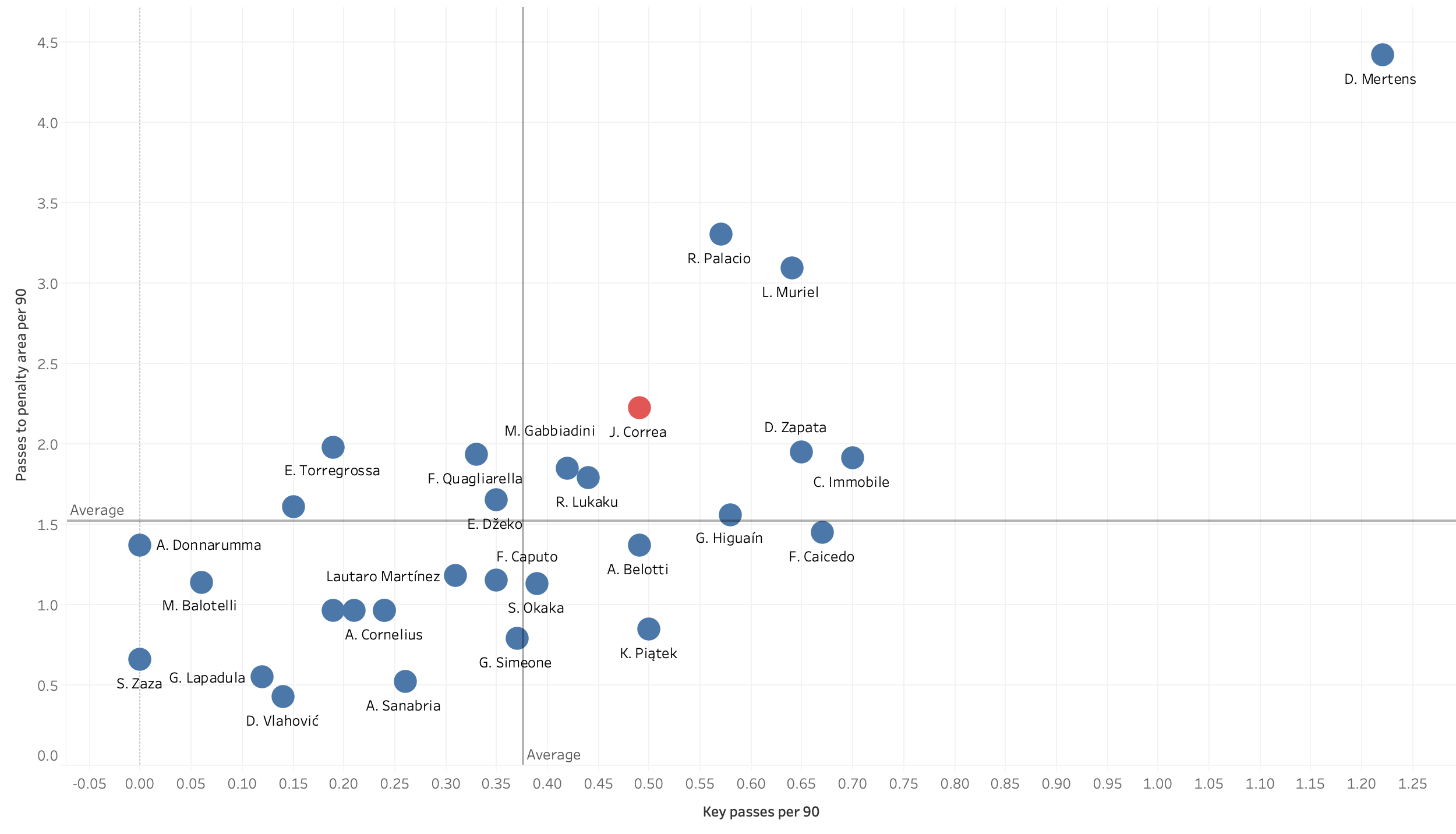 Joaquin Correa’s positioning needs to be credited as having an impact on his impressive output; often the striker will drop into the pocket of space between the two defensive lines as he looks to pick up possession of the ball. Forcing the opposition to gamble on pressing or to sit back and maintain their defensive shape, the pressure of making a decision often can take the opposition out of their comfort zone and lead to an opportunity to play through into the penalty area. 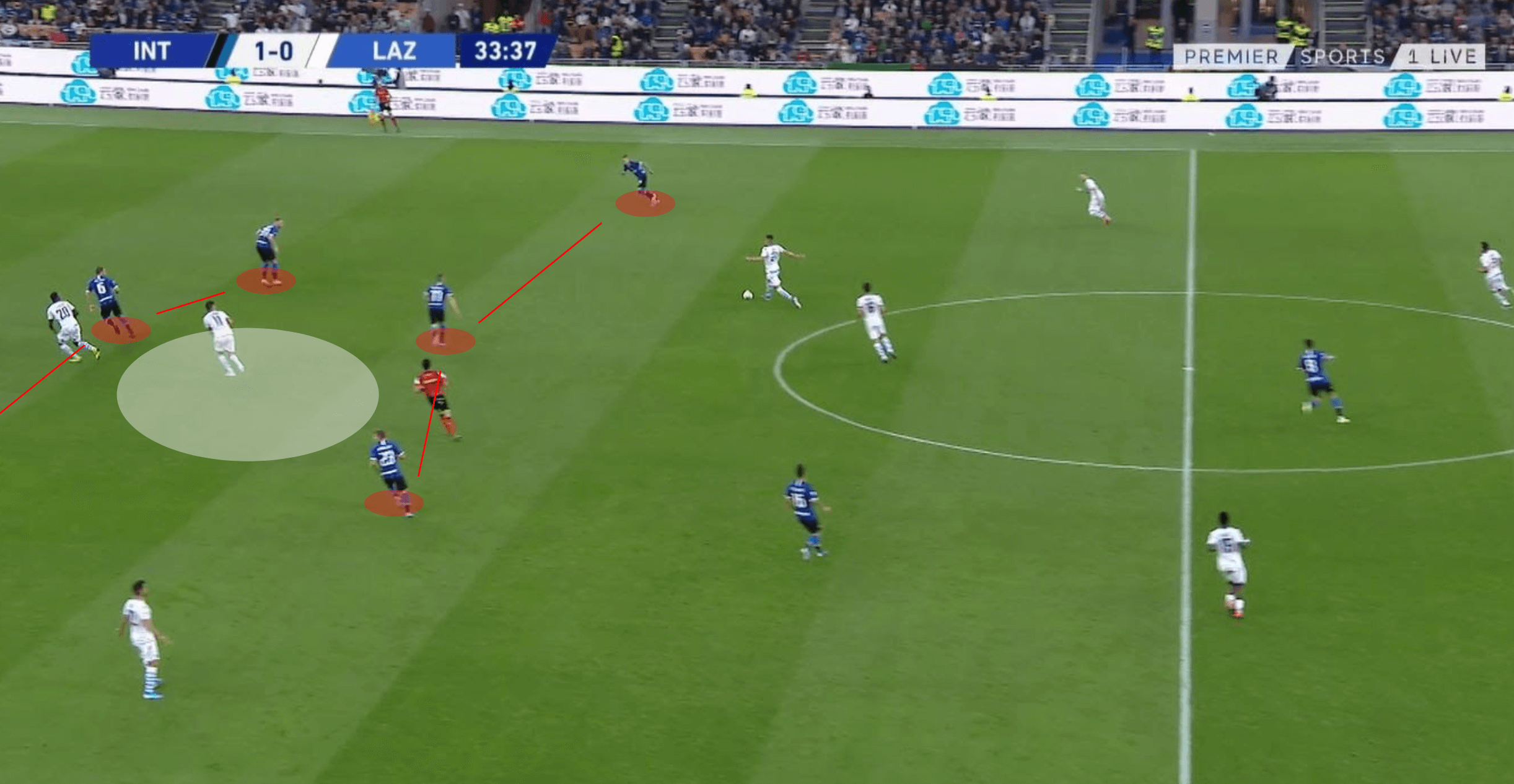 We can see Correa occupying this space in the above image, in this situation Inter midfielder Marcelo Brozovic is faced with the decision of whether to drop off from the second defensive line and pick up Correa or press Sergej Milinkovic-Savic to challenge him progressing with the ball. 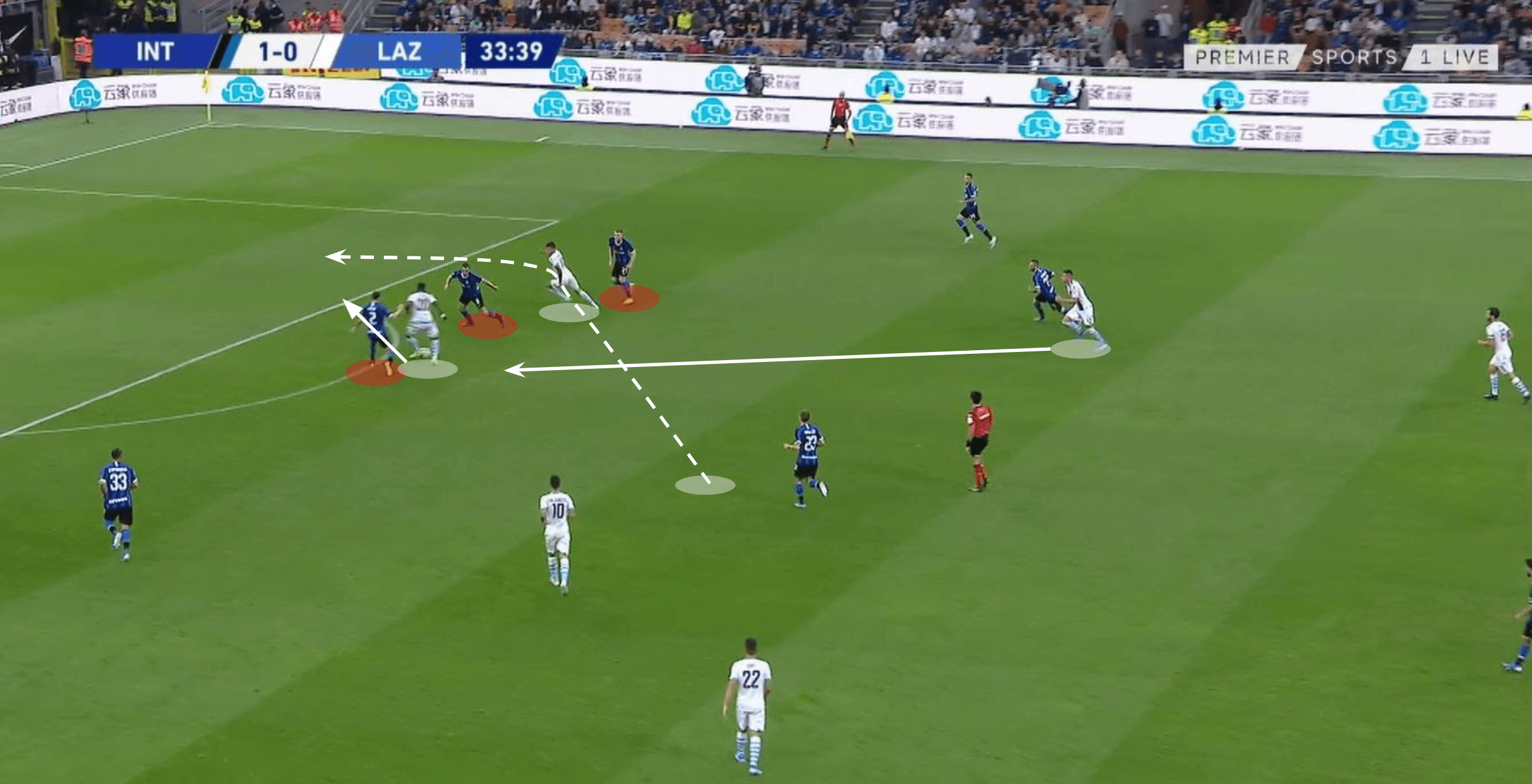 Brozovic opts to advance towards Milinkovic-Savic, leaving Correa without a marker, and the Argentinian can be seen showing his intelligence and ability to read the game as he uses his pace to make a run in the half-space off the shoulder of Stefan de Vrij. Despite Inter having a numerical advantage, the fluidity and cohesion of the link-up play rewarded the hard-working Correa with a chance on goal.

Conducting a further analysis into Joaquin Correa’s threat on the opposition’s goal, I have opted to compare the Argentinian’s performance against the following two metrics: touches in the opposition’s box per 90 and shots on target percentage. 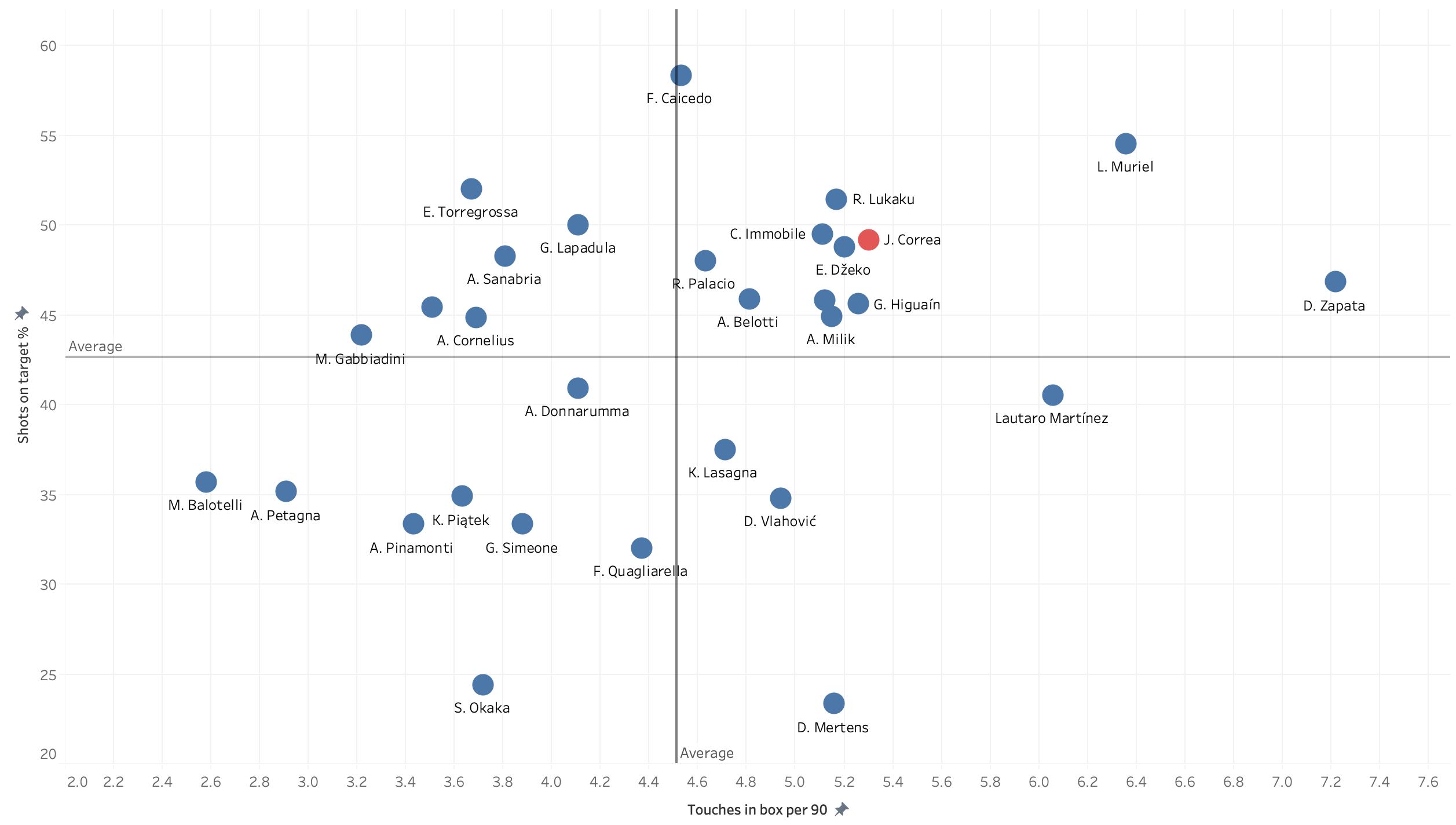 The first thing which jumps out at me when looking at the above data visualisation is Correa’s 5.3 touches in the opposition’s box per 90, a figure which positions the striker in the top four of Serie A. Correa’s dribbling ability, covered above, is most likely the reason for him ranking so high in relation to this metric. The Argentinian has attempted 195 dribbles in the last year with 57.4% of them coming up against opposition centre-backs.

Taking the other metric, shots on target percentage into consideration, Joaquin Correa has a shot on target figure of 49.2%, only 0.3% behind Ciro Immobile, again ranking the Argentinian well within the top ten strikers in Serie A. 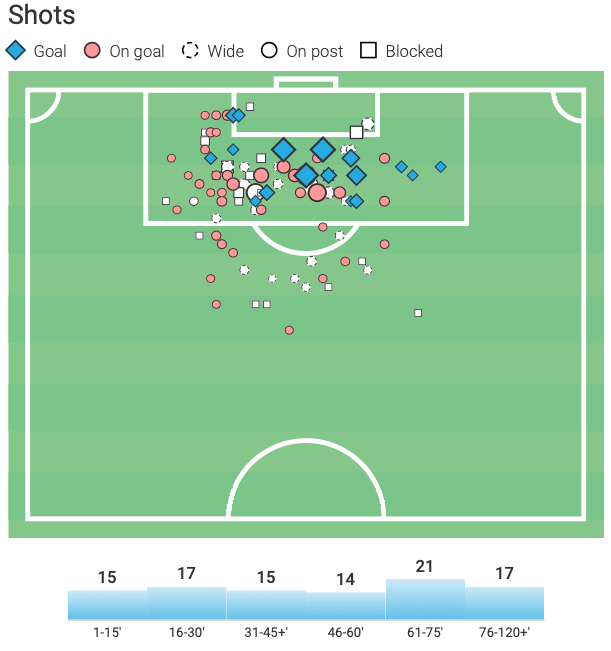 Despite his goal threat, part of the issue surrounding Joaquin Correa’s finishing is his willingness to shoot regardless of the angle that he is presented with, often you will find Correa in possession wide of goal where he will attempt to shoot from acute angles.

Inzaghi will no doubt be delivering specific coaching to the Argentine on the importance of positioning when shooting, hoping to develop his game and to look for the pass.

Simone Inzaghi rarely adopts a press with his Lazio side, this is reflected with Lazio having the third-highest passes per defensive action in Serie A, but despite what would seem like a lack of pressing, the Biancocelesti have the 8th highest average in terms of ball recoveries in the final third per 90 minutes in the league, with one of the main contributors to this statistic being Joaquin Correa.

The Argentinian has recovered the ball on 33 occasions for Lazio in the final third, with 19 of these recoveries coming from zone 14 (the middle of the pitch immediately outside the penalty area). 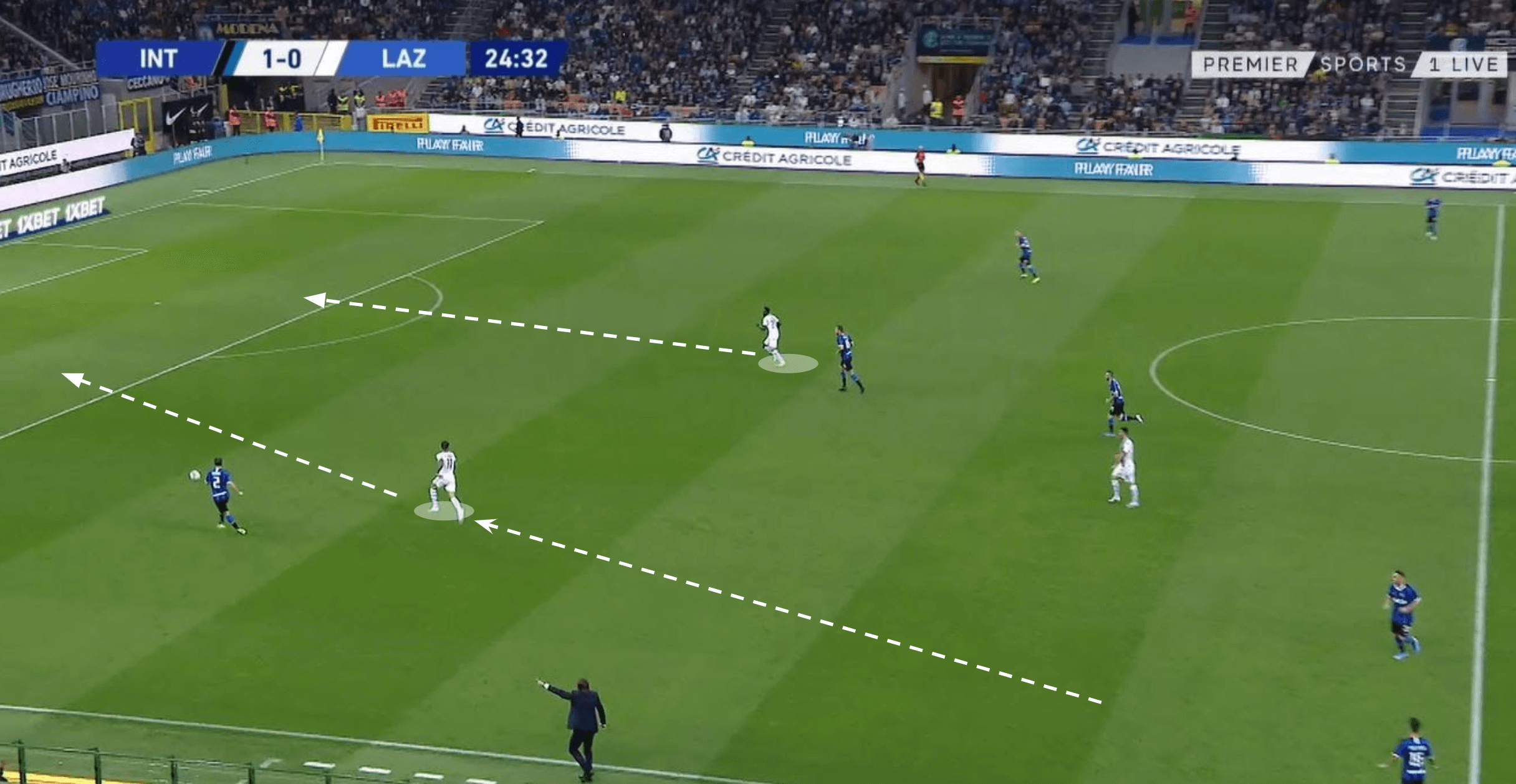 The above image highlights Correa’s energy and work-rate. The striker can be seen covering 40 metres to put the Inter goalkeeper under pressure, and he often can be found as the main catalyst for Lazio in relation to pressing often triggering his teammates’ press, in this occasion forcing the opposition to play the long ball rather than build from the back. 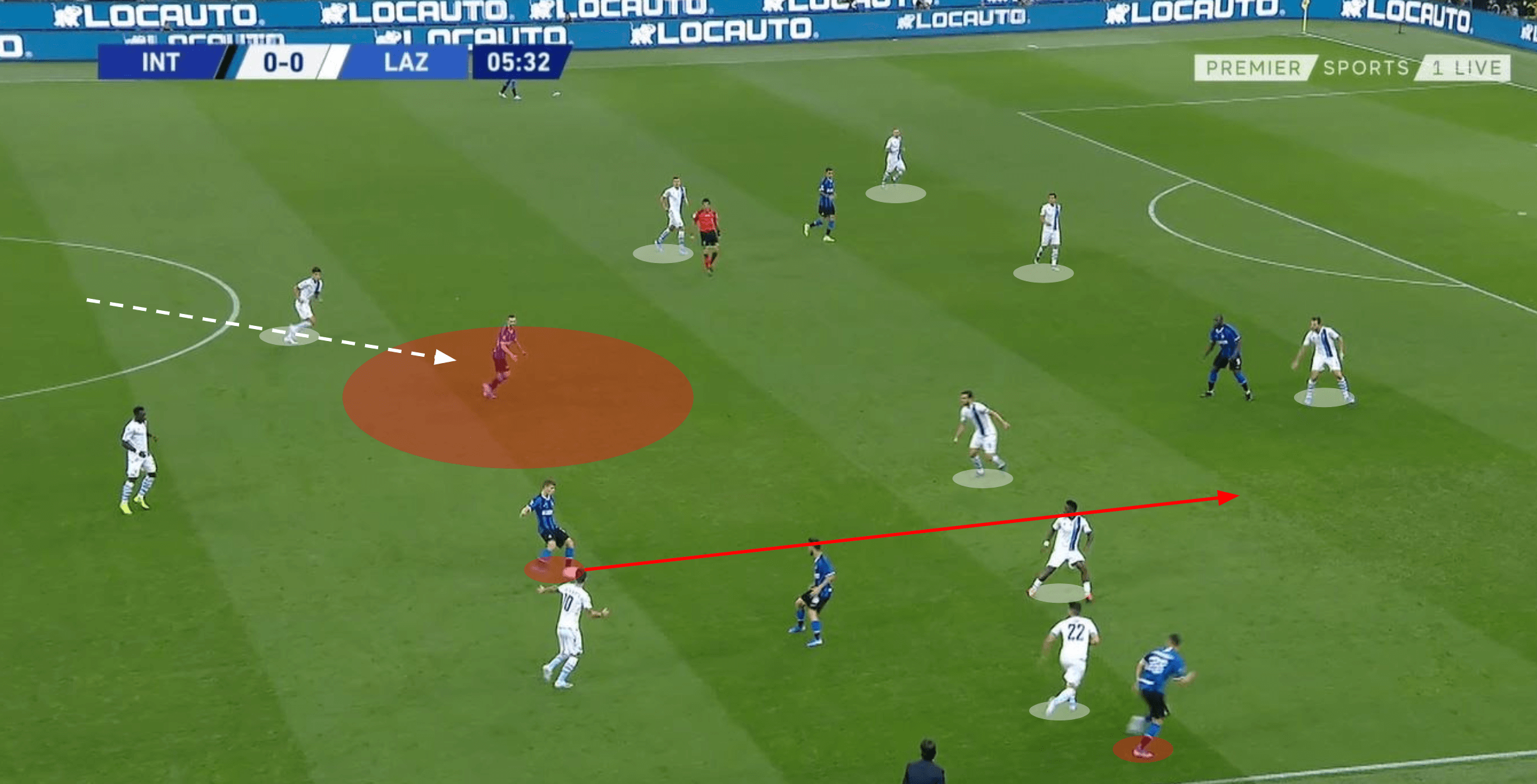 An example of Joaquin Correa’s defensive awareness can be found again against Inter. Here midfielder Brozovic can be seen in space centrally, with Marco Parolo caught in no man’s land the striker drops in to ensure the midfielder can not receive the ball pressure-free. 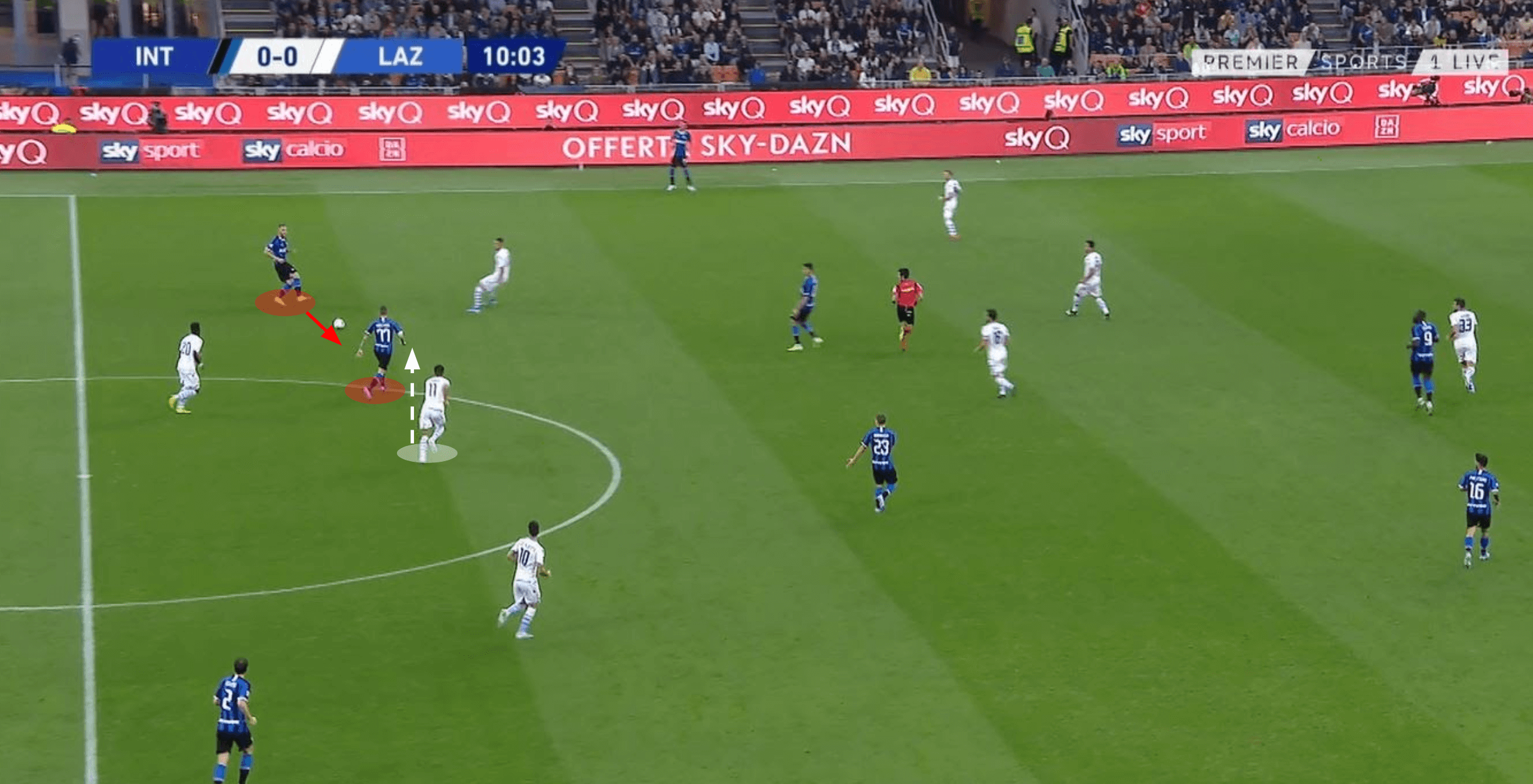 An example of Correa regaining possession through pressing can be seen in the above image. Again midfielder Brozovic receives a pass from his teammate, in this situation Brozovic hasn’t scanned the field prior to receiving the pass and has no mental image of other players on the pitch. Picking up on this Correa closes in on the midfielder and recovers the ball, he then uses his ability on the ball to dribble past his opponent isolated in the wide channel drawing a foul and relieving Lazio from pressure.

Joaquin Correa is a talented individual who has thrived under Simone Inzaghi’s leadership at Lazio. The 25-year-old is having his best season yet in football, aided by the consistent game time and staying relatively injury-free.

The sky certainly is the limit for Correa, who could become another success story from the long line of Argentinians (Diego Simone, Hernan Crespo and Juan Sebastion Veron), who have used their time at Lazio to progress into one of the leading football clubs in Europe.

Simone Inzaghi certainly will have different ideas, as the Italian is looking to build something special at Lazio and the Italian will no doubt value Joaquin Correa and want the player to be involved in his long-term vision for the Biancocelesti.