Luis Alberto over the past three seasons has become one of the most desirable players in Europe, however, his rise in value has not been smooth. His move to Lazio under Simone Inzaghi saw the Spaniard arrive in Rome under a cloud of uncertainty as he looked to get his career back on track.

In his first full season in Serie A, Alberto’s performances looked as if Jurgen Klopp had made a mistake in letting the midfielder leave Liverpool, repaying the Laziali with 24 goal contributions (11 goals and 13 assists) in 34 appearances, mainly operating as a second striker.

However, the acquisition of Argentinian Joaquin Correa from Seville would see Alberto operate mainly as an attacking midfielder in his second campaign, a season which he struggled to have a similar impact, leaving fans worried that he may be branded with the tag of a one-season wonder.

Another season and another change in role has seen Luis Alberto (4 goals and 12 assists), become the fulcrum of Lazio’s attacking play and find himself labelled as one of the teams most talented and dangerous players. The Biancocelesti have taken Italian football by storm this season and have gone on a 21 game undefeated streak in Serie A, becoming an unexpected threat in releasing Juventus’ eight-year stranglehold on the Scudetto.

In this tactical analysis in the form of a scout report, we take a closer look at Luis Alberto’s ability and examine how Inzaghi’s tactics have enabled the Spaniard to become a key man this season in his new role as a mezzala.

This season Lazio have generally favoured a 3-5-2 formation under Inzaghi, the Italian has utilised this shape in 90% of matches in Serie A, in which Luis Alberto has operated in the role of the Mezzala in which he has more space and time to dictate play. This term mezzala originated from the combination of two words – ‘Mezza’ and ‘Ala’, which when translated, means ‘half-winger’. 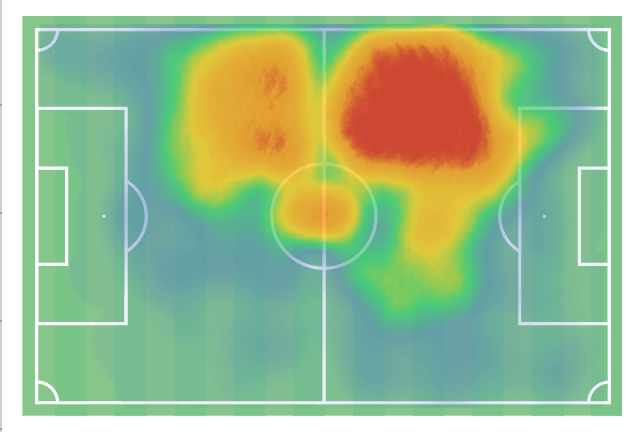 There are two main dimensions to Alberto’s mezzala role in Inzaghi’s side, defensive support and attack both which will be covered later in more detail.

Looking at the Spaniard’s heat map, the midfielder mainly operates from the middle third of the pitch, covering a significant amount of space across the field, favouring an advanced position in the middle third. The heat map highlights Alberto’s positional play, the Spaniard favouring the wide left vertical channel or the left-hand half-space. It is from this position that Alberto is in his element, having the capacity to find pockets of space, to receive the ball, and then to play the incisive through pass. The below key pass map for the season shows just how dangerous Alberto is when positioned in this channel. 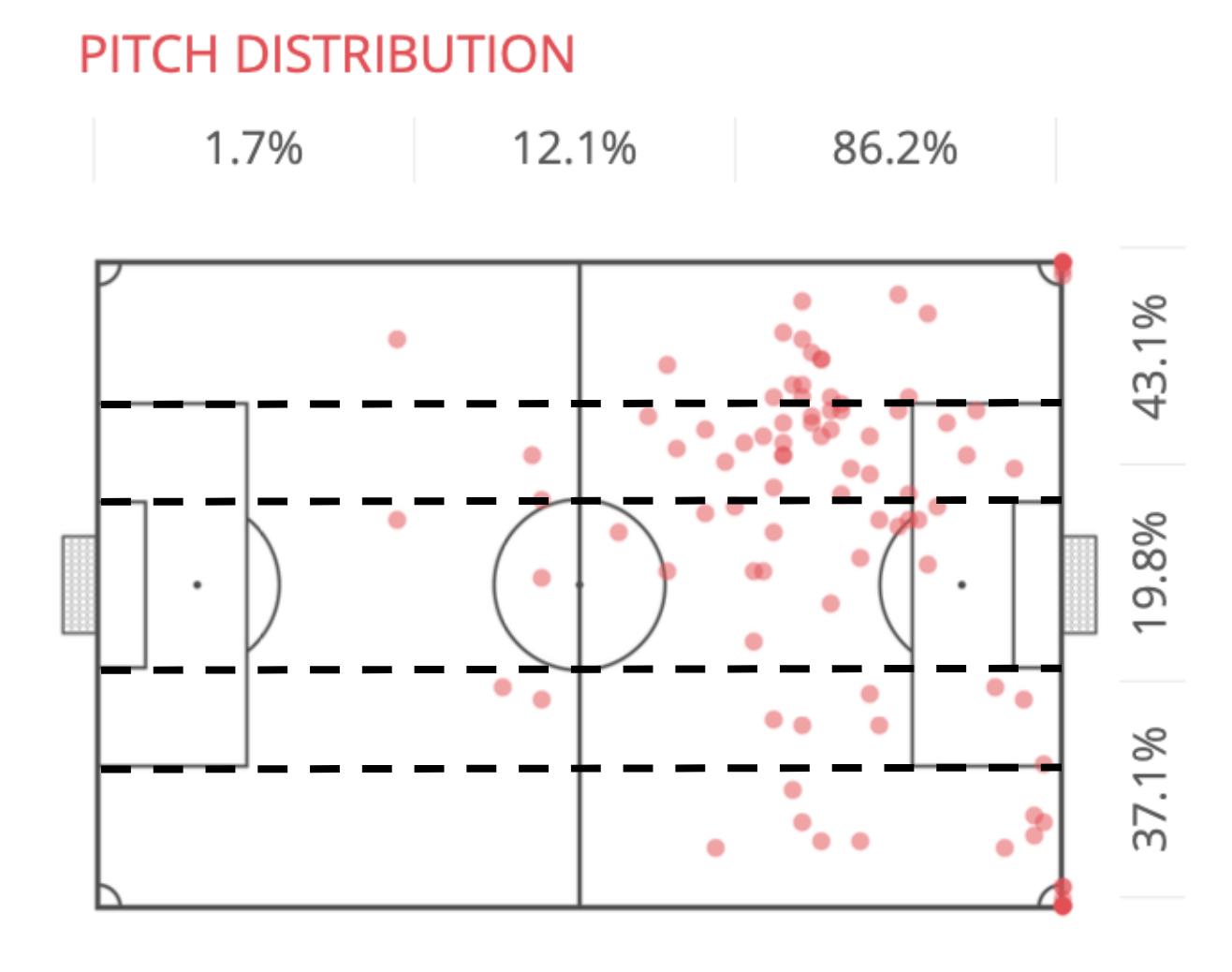 Simone Inzaghi’s tactics under the 3-5-2 at Lazio has three midfielders positioned in the central area, all of which adopt a specific role. The midfielders (Alberto and Sergej Milinkovic-Savic) sit either side of Lucas Leiva operating as a defensive midfielder, often combining with the overlapping fullbacks or the second striker, helping Lazio to progress the ball forward into the attacking third.

Milinkovic-Savic operates more as a box to box midfielder; the Serbian can often be found progressing further up the pitch into the opposition’s penalty box due to his height, providing Lazio with an additional aerial threat on attack. This role of Milinkovic-Savic also places a significant importance on Alberto, as the midfielder has an increased responsibility in supporting Leiva with defensive duties if the ball is lost in an advanced position, ensuring Lazio can counter the counter.

Alberto goes by the nickname of ‘The Magician’ due to his ability to create chances for Lazio. The midfielder works his magic in tight spaces, often completing passes in a compact defensive structure where you would assume no passing lanes were open.

In order to show how effective Alberto is in these situations, we have conducted the below data analysis, looking at all Serie A central and attacking midfielders who have played over 1000 minutes for their clubs. This analysis looks at the key parameters which we feel highlight how effective Alberto is in the attacking phase, key passes per 90 and expected assists (xA) per 90. 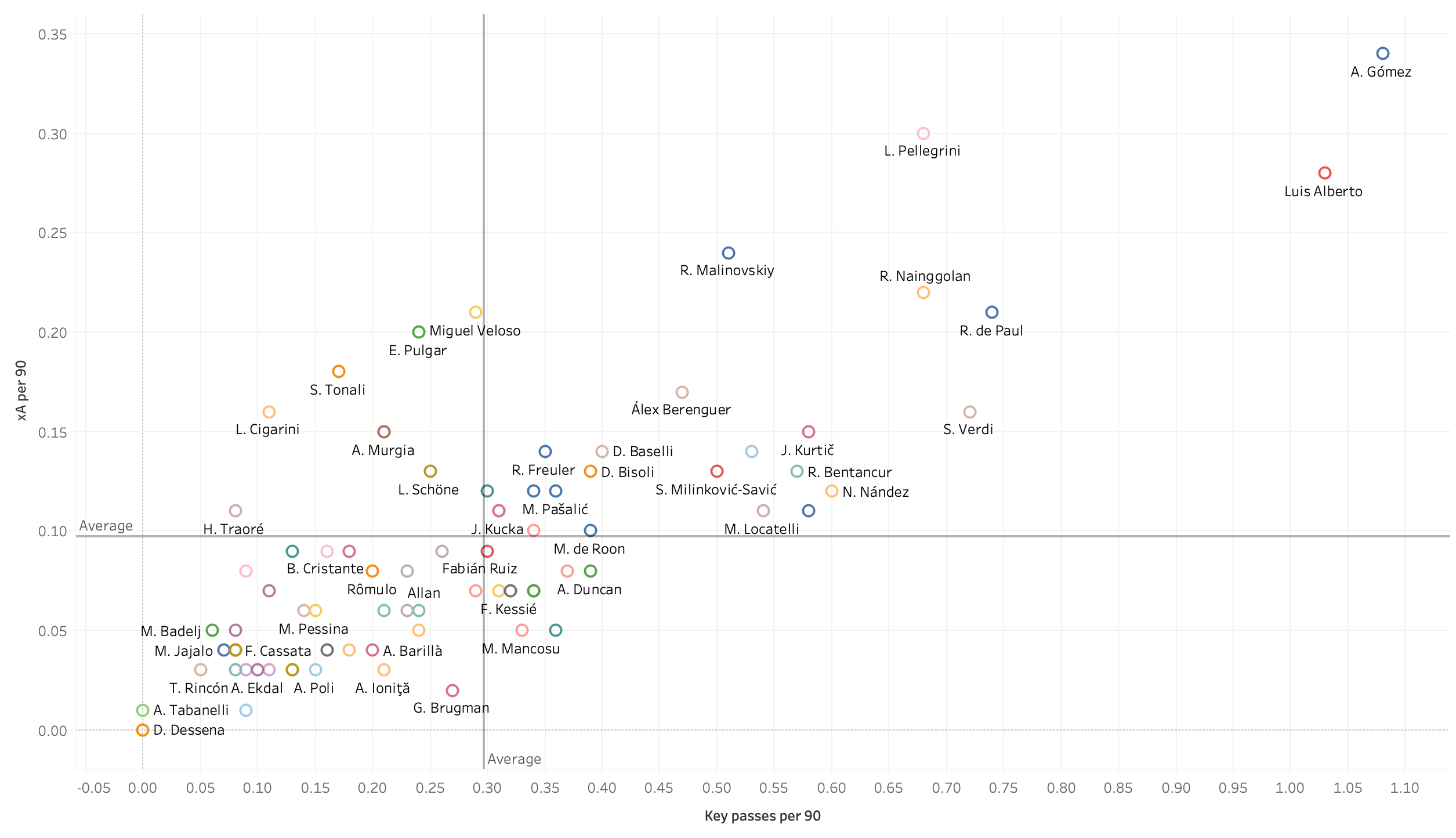 As you can see from the above data visualisation Luis Alberto is a clear outlier when comparing these two data sets, averaging 1.03 key passes per 90 minutes along with an expected assist figure of 0.28, which credits the quality of ball the Spaniard is able to produce.

The positioning of Alberto has a direct impact in relation to his ability to produce key passes on a frequent basis. His knowledge of space and angles make the Spaniard one of the key players when it comes to playing either the final ball or the pass which comes before the final ball. A frequent occurrence when carrying out an analysis of Alberto is his ability to progress the ball down a passing lane, outside an isolated centre-back for a player in an attacking position. 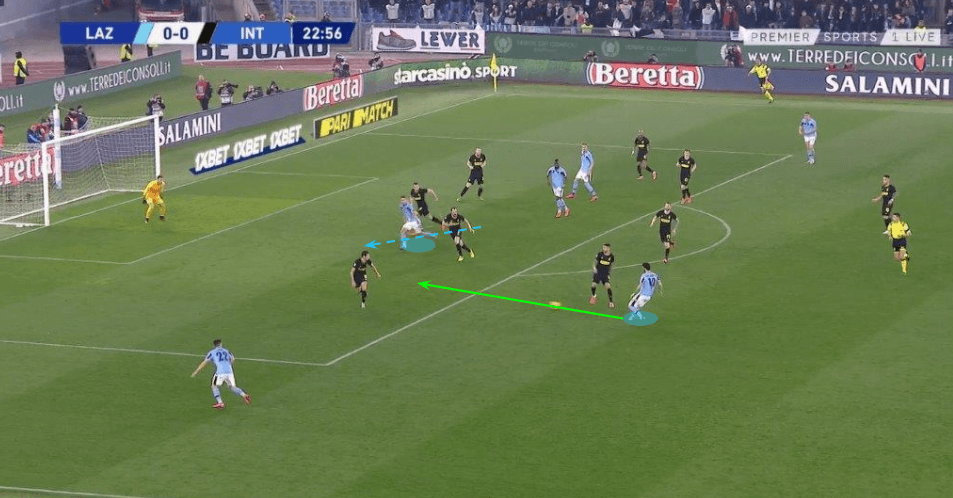 The primary role of Alberto is to be a playmaker and influence the game, the above section has highlighted how the Spaniard contributes to chance creation. However with the ever-changing demands of the game, to be considered in the very top bracket of central midfielders you need to contribute to the team in terms of goals. This statement holds a significant value at Lazio as striker Ciro Immobile has scored 45% of all team goals in Serie A this season, therefore there is also the added need to relieve Ciro Immobile from carrying Lazio in terms of scoring goals. 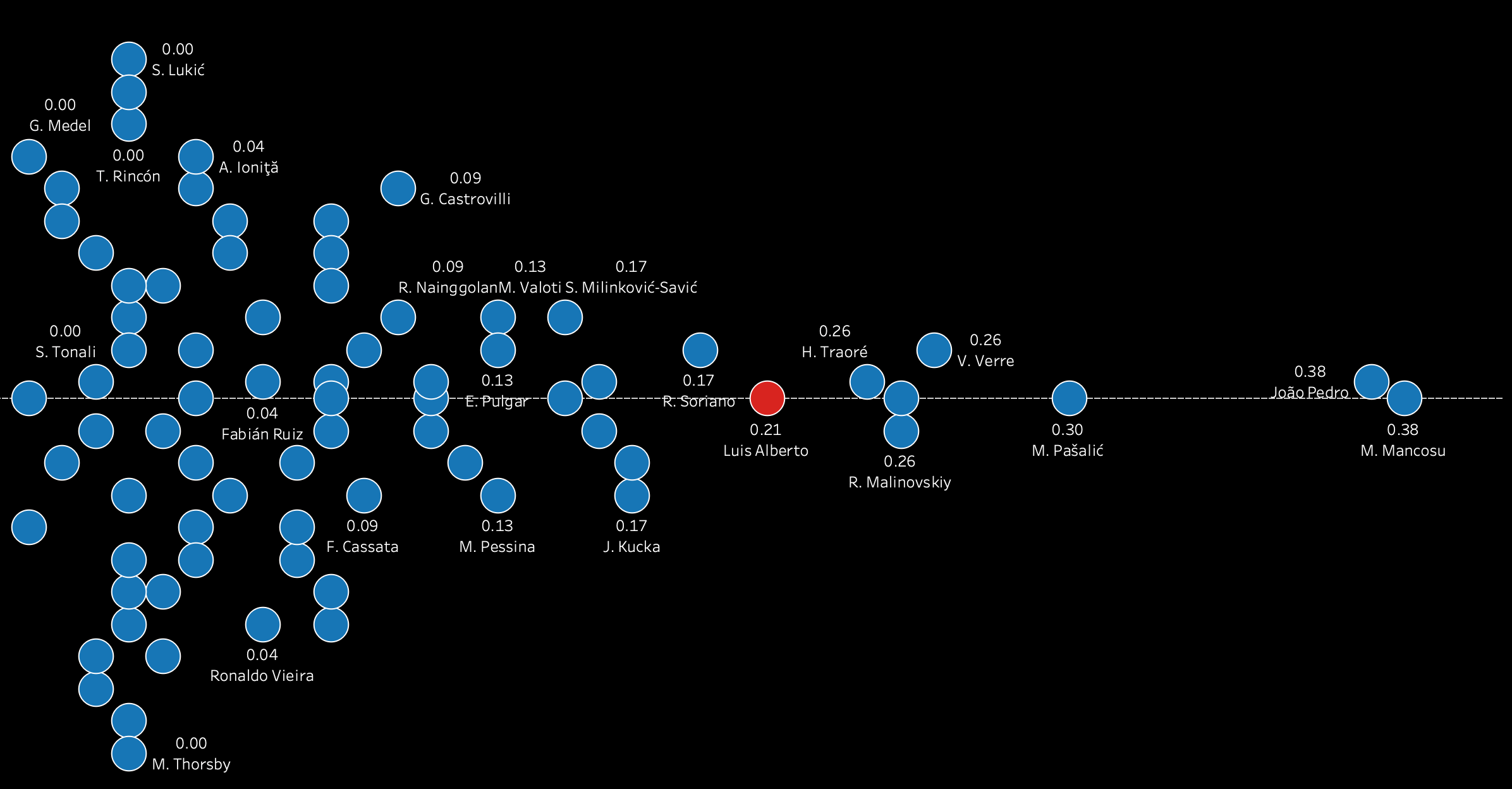 The above data visualisation shows just how adept Alberto is in relation to getting himself in goal scoring chances. The Spaniard sits in the top ten of Serie A attacking/central midfielders in terms of his expected goals (xG) per 90 minutes value, crediting his ability to time his runs into the opposition’s box and get a shot off on goal. Drilling down a little deeper into Alberto’s goal-scoring ability this season you will notice that his actual xG figure is 5.71, this figure is higher than his return of four goals which indicates Alberto could still improve in relation to his attacking threat.

Luis Alberto’s impact under Simone Inzaghi isn’t limited to just the attacking third; the midfielder also plays an important role in progressing his side up the pitch. There are times where Lazio’s defensive players have struggled to find a vertical pass, it is here where Alberto shows his tactical intelligence. The Spaniard can often be found dropping deep and collecting the ball, using his individual quality to receive passes between the block and using his dribbling ability to break, placing pressure on the opposition; he is Lazio’s main catalyst. 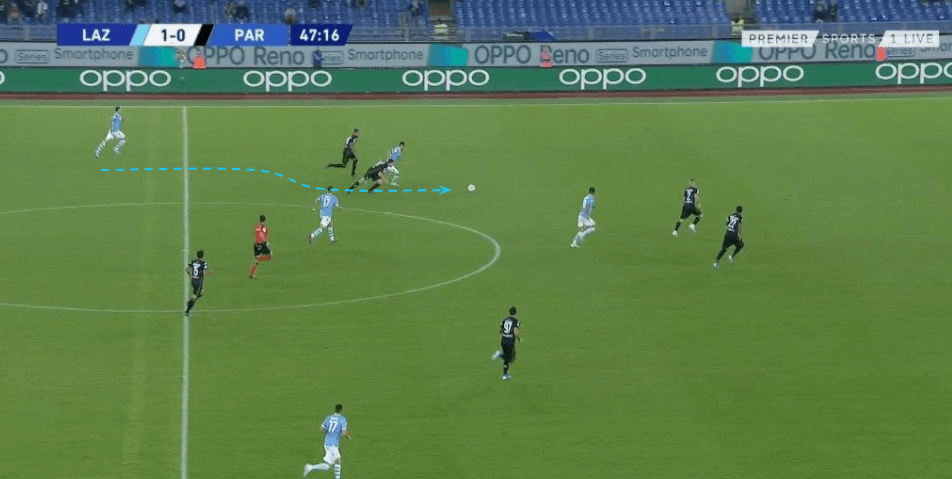 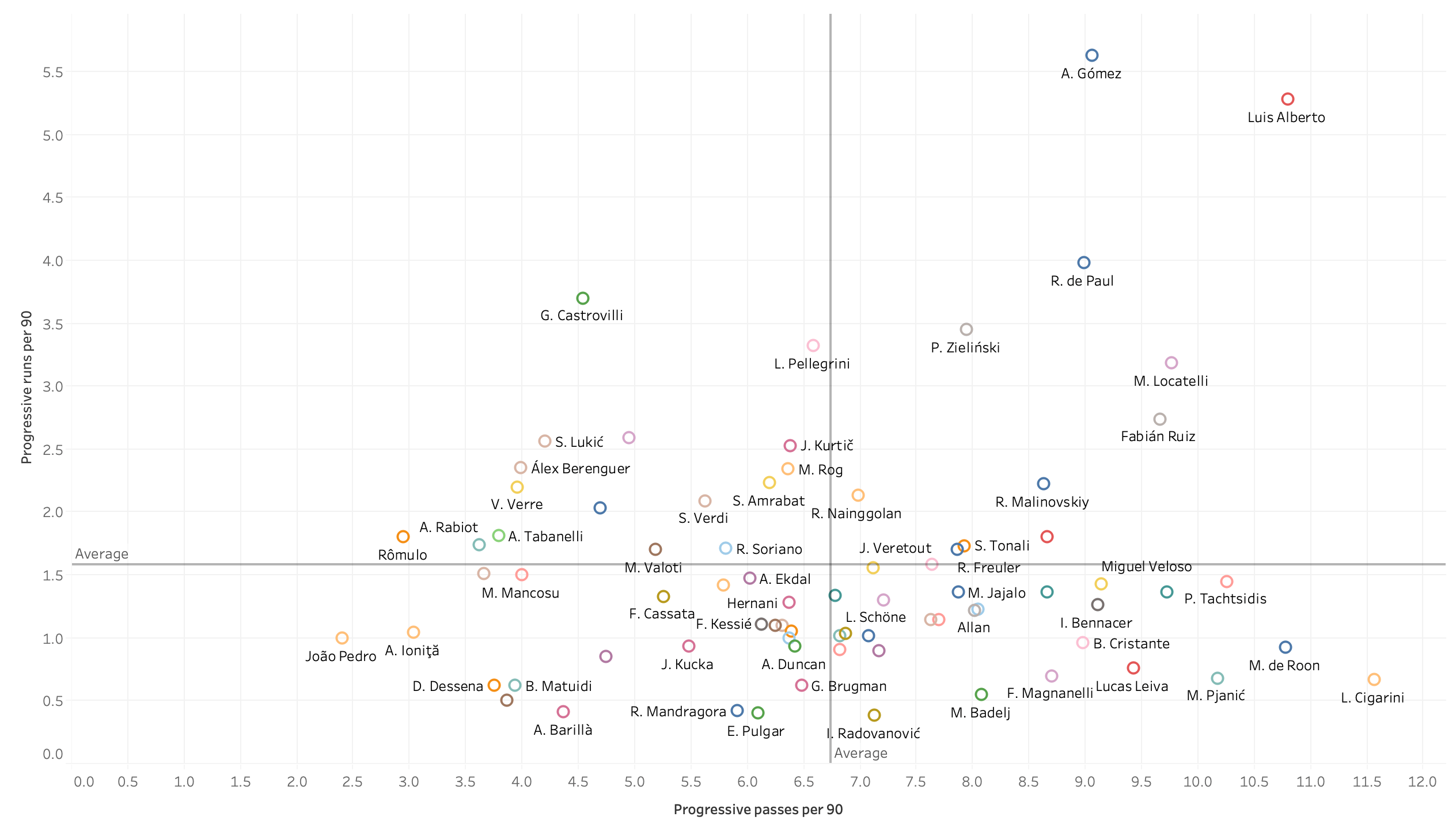 Luis Alberto also has the ability to play a diverse range of passes, which keeps his opponent guessing as to where the Spaniard will move the ball. He is adept at playing quick short exchanges, through balls to feed the runs of Ciro Immobile or Correa (Alberto’s figure of 2.9 per 90 minutes leads Serie A), or a long pass towards the towering figure of Milinkovic-Savic, all of which aid Lazio during the transition phase of play. 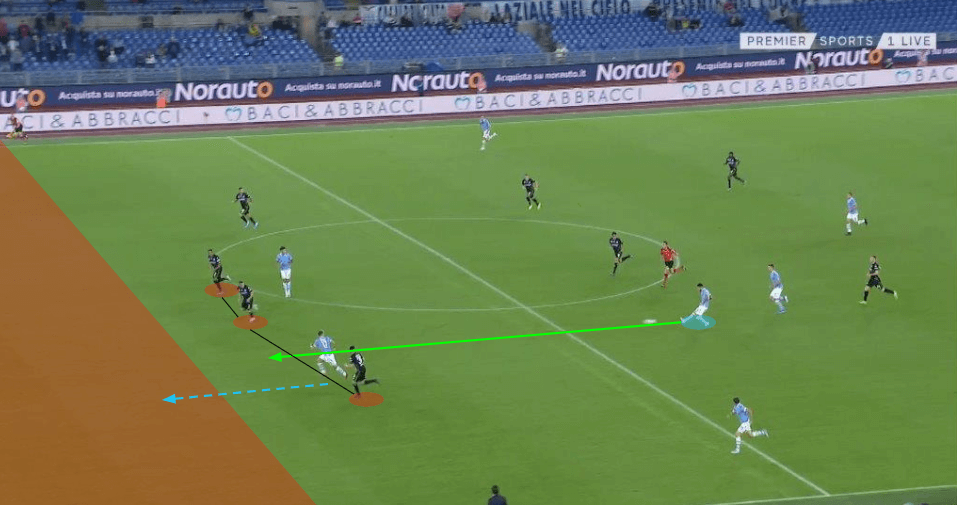 An example of Alberto’s ability on the ball can be highlighted in the below images, firstly against Inter, Alberto receives a lay-off from striker Felipe Caicedo, allowing Inter to push their defensive line to the edge of the box. Just before receiving the pass Alberto takes a quick glance up and notices Milinkovic-Savic makes a short burst off the back of his marker. Alberto’s technical ability paired with his vision allows him the opportunity to lift the ball in the direction of space behind the defensive unit, for Milinkovic-Savic to attack. 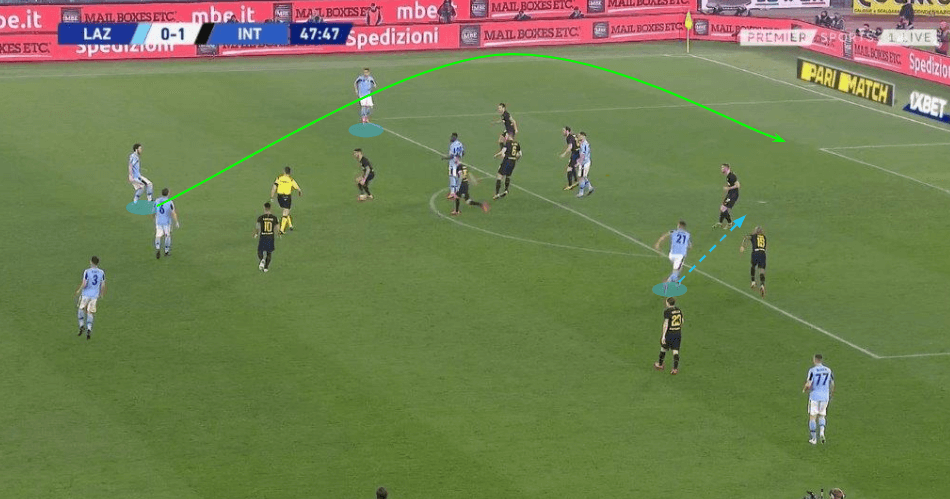 Another fine example of Alberto’s ability to play a precision pass comes against Parma, who were operating an exceptionally compact block as they looked to protect their penalty area. Alberto, sitting in the half-space comes alive, the Spaniard takes the ball, the advanced players of Lazio make their runs knowing that Alberto has the capacity to play through the eye of a needle to find them. 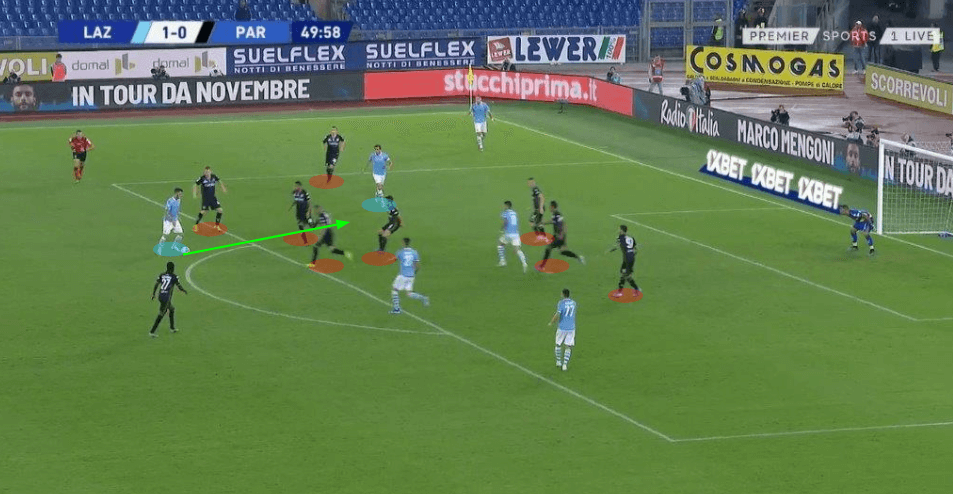 Simone Inzaghi rarely adopts a press with his Lazio side, this is reflected with Lazio having the third-highest passes per defensive action in Serie A, despite what would seem as a lack of press, the Biancocelesti have the 8th highest average in terms of ball recoveries in the attacking third per 90 minutes in the league, showing that you can still defend without adopting a press.

Luis Alberto has recovered the ball on 72 occasions for Lazio in the opposition’s half, crediting his work rate and ability in relation to reading the game, an asset helping Lazio transition from the defensive phase to attack, usually in situations where the opponent will not have a defensive structure set in place. 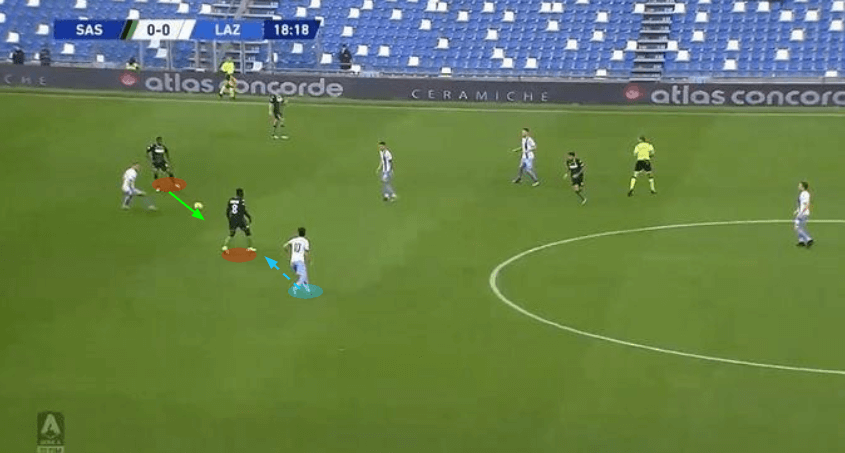 An example of Luis Alberto regaining possession of the ball in the attacking third can be found against Sassuolo. Here midfielder Alfred Duncan receives a pass from his team-mate Marlon, in this situation Duncan unlike Alberto in possession hasn’t scanned the field prior to receiving the pass and has no mental image of other players on the pitch. Picking up on this Alberto closes in on the midfielder and recovers the ball, leaving a simple pass to Immobile who has a clear run in on goal.

To conclude, there is no doubting that Luis Alberto has made the mezzala role under Inzaghi’s system his own. In the age of football where versatility is key, the Spaniard has excelled showing off his technical brilliance in attack and also his ability to initiate defensive actions further up the pitch.

His ability to produce performances of the highest standard across the duration of the season has also seen the Spaniard earn a recall to Spain squad under Luis Enrique.

Consistency is key, if Alberto can continue to perform to the level which he has done through the 2019/20 season over the next few season’s then there is no question that the midfielder could become synonymous to the role of the mezzala.