Earlier this month in the April edition of the Total Football Analysis Magazine, we ran a tactical theory piece on ‘Attacking with inverted wingers‘. Along with giving a brief history of the position, we outlined the unique and often overlooked advantages of this role in the final third of the pitch. I would recommend a read of that article to maximise your understanding and learning in support of this training ground piece.

Otherwise, check out the fantastic video produced by Max Bergmann on ‘Attacking with inverted wingers‘. This video gives a clear visual and tactical representation of the piece laid out in the April magazine.

The current era of the Premier League gives us many great examples of inverted wingers who are effective in developing and finishing prominent attacks for their team. To name but a few to observe who perform this role well; Sadio Mané and Mohammad Salah for Liverpool along with Raheem Sterling and Riyad Mahrez for Manchester City. All of which are capable and effective at two things in particular, firstly, creating high-value chances for their teams from wide areas. Secondly, they very often achieve a lot of secondary success for their team by drawing fouls to win penalties and free-kicks as well as corners.

Below we will give a tactical analysis of the position and the specific unique advantages it serves.
As well, the analysis progresses into a structured training ground piece where players can develop their understanding of tactics and how the inverted winger can positively affect their team in attack.

A brief overview of the unique advantages

I will preface by stating, the inverted winger is not superior to what you might consider an orthodox winger. What is important to distinguish is your teams’ style of play and if that system supports the attacking flair of the inverted winger. Should a coach look to play with an inverted winger then here are the some of the unique advantages available to this player. 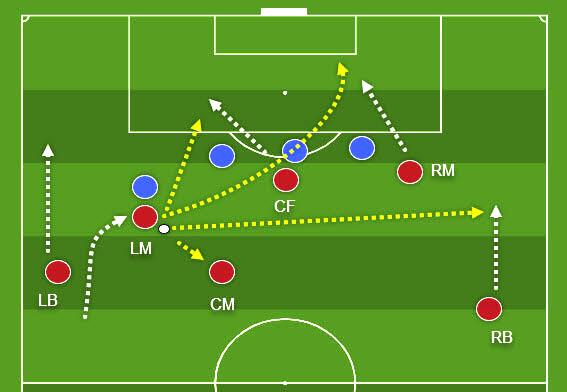 In no particular order, here are four distinct traits available to an inverted winger.
By cutting inside and engaging the opposition full-back, the winger serves to create space for the supporting full-back to overlap and become an option high and wide. Immediately after cutting inside a gap can become available to play a penetrating pass into the blind-side run of the centre-forward to meet with and finish. Should the inverted winger be at a sufficient distance and have an angle he can deliver an inswinging cross to the back post for either or both the centre-forward and the opposite winger to meet and score from.

Finally, When teams switch play, we generally see the course of passes go through the centre-midfielders or centre-backs. However, by the inverted winger playing a long crossfield pass to his teammate on the opposite, the opponent’s weak side, he helps the ball arrive in a dangerous position before the opposition has time to organise and receive an attack. 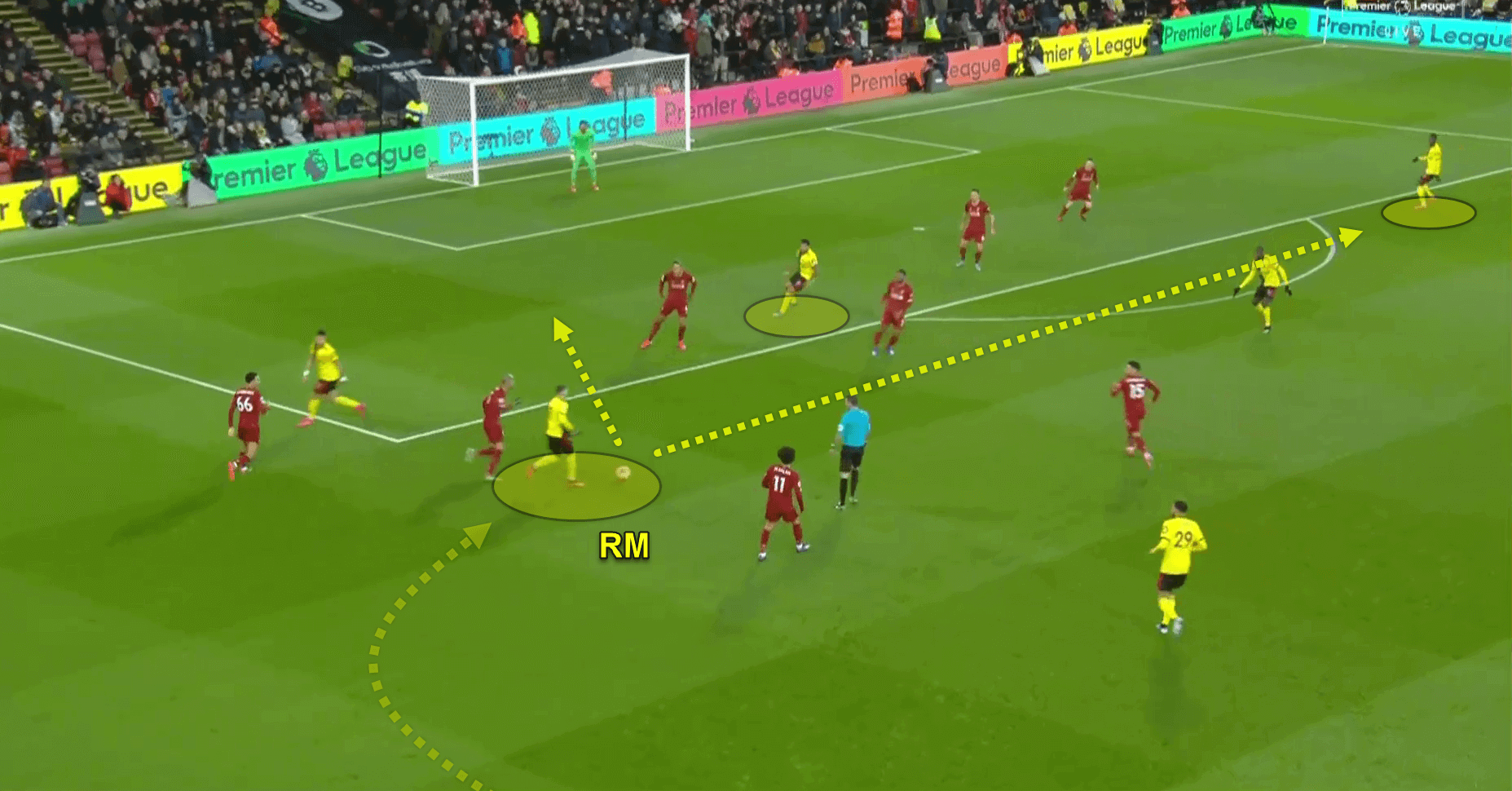 Above, we see an example of an inverted winger unbalancing a defence and discovering his options to penetrate from inside. In the Premier League game between Watford and Liverpool, this past season Gerard Deulofeu carries the ball inside. The right-footer operating from the left protects the ball on his safe side as he drives inside.

Central striker Troy Deeney can make a blind-side run on Liverpool’s Van Dijk to meet a potential pass from Deulofeu.
While the Spanish winger can play a Crossfield pass to his teammate on the opposite side to continue and develop a dangerous attack.

Here we offer a three-part progressive training session that will support the attacking potential and learning opportunities of the inverted winger. Although all practices are very rich in detail and coaching points make your players clear on the aims and objectives before they begin.

The first practice, in particular, can be used to target and develop so many aspects of the game, such as combination play, half-space penetrating and exploiting the weak side. 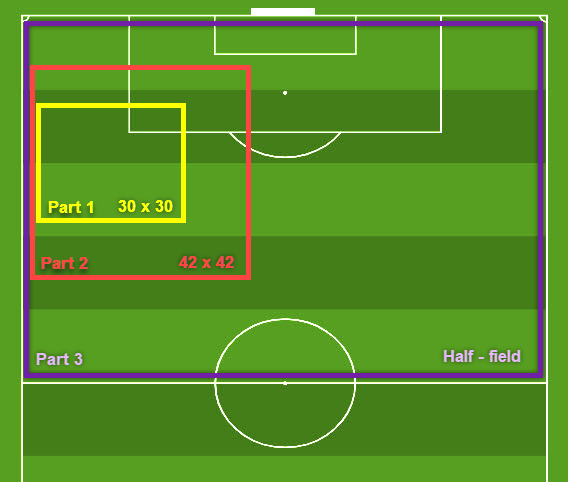 Practice #1 and #2 can be set up twice and mirrored on both sides of the field. We thereby have smaller game realistic practices that engage all players with more touches of the ball. Practice #3, however, brings all players together as we put all trained principles into practice in a conditioned phase of play.

Be flexible, depending on the age and ability of the players you may want to increase or decrease the size of the area. Also, maybe add more defenders to make it harder or neutral players to get more success. Whatever helps you get success, call on your expertise and critical thinking as a coach. 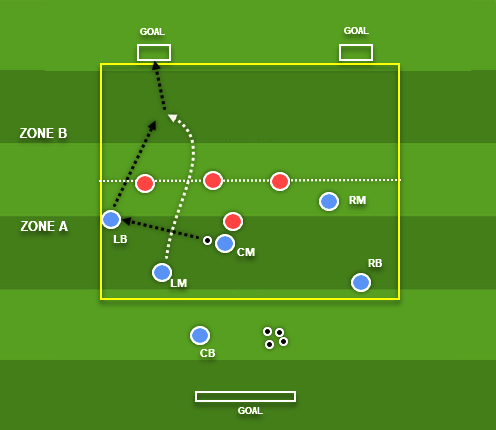 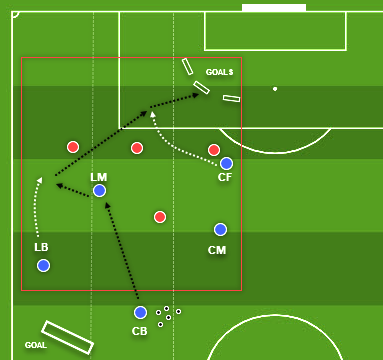 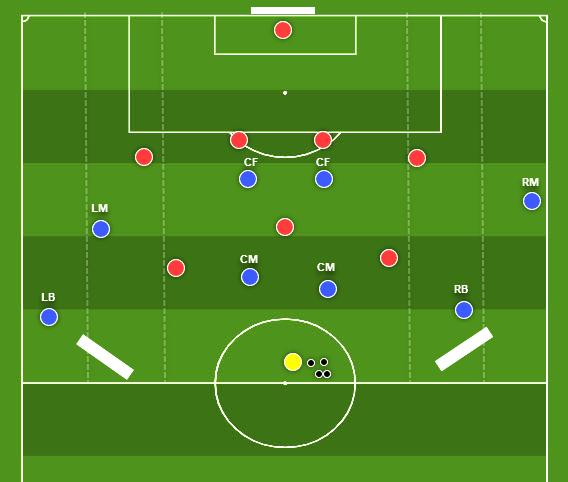 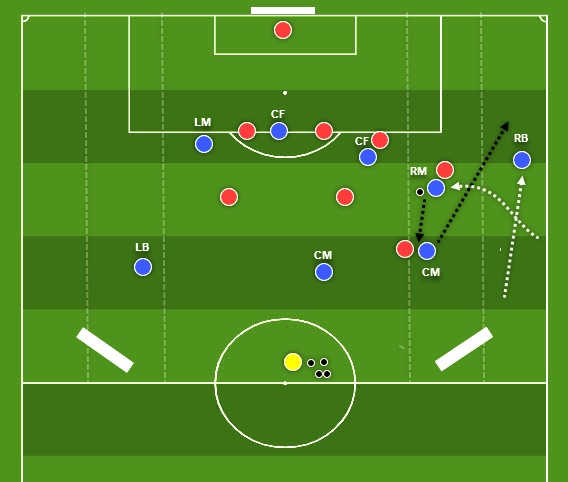 Above, is a tactical annotation to show the attacking advantages and potential of the inverted winger.
A realistic scenario of an inverted winger carrying the ball inside as he engages the opposition full-back, he serves to create space for the supporting full-back overlap and become an option in the channel via a pass from the CM if a reverse pass was not available.

The phase of play is very rich in potential attacking patterns and options, so the fewer the objectives and expectations, in the beginning, the better.

Educate yourself and be clear about what you want to achieve from this topic.
One aspect although we mention but do not train in isolation here is the in-swinging cross.
The in-swinging cross is a play that requires collective thinking and preparation from the players.
As the timing of runs, the timing of the cross and the positioning of the attackers at the back post requires a lot more training than a bullet-point mention from the coaches log-book.

Although it can be developed particularly from practice #3 with the support of crossing and finishing exercises as a pre-requisite.
Although we allow for ‘Coaching Points’ in each practice, do your best to save on them.

As coaches, we want out voices to be a premium; however, to do that we need to limit our interruptions and messages to players in a high tempo session. That is not to say, be satisfied with repetitive errors and mistakes, far from it.  Try to engage your players in video sessions of good examples of inverted wingers prior to the session. Video footage from either your own team or even clips from the best teams in the game. This will serve to create performance and tactical targets in the player’s minds before entering the training ground.

Coaching the inverted winger is a topic very rich in detail and coaching points, even at the highest level.
Make your aims clear to the players and help them enjoy the session.
If you have any questions, or you want to discover more, write to me on Twitter @easytactics and I’ll happily cover the topic in greater depth.

I recommend all coaches watch the Total Football Analysis video ‘Attacking with inverted wingers’ to further their knowledge and understanding of this unique position.