While we looked in the other data analyses of this series already at the best centre-backs, full-backs, defensive midfielders, and offensive midfielders of Austria, today the wingers are the group we will take a more detailed look at by using data and statistics. We already found some interesting young talents besides the already well-known stars and regular starters of Austria.

In this data analysis, we will use statistics to find the best wingers of Austria to then talk about the players who stood out in the comparison. All the data which is used in this analysis are the average statistics per 90 minutes.

Before we look at the graphs and results of my comparison, I want to make clear which filters I used to understand which players are in my pool and which aren’t. Basically, the most important metric is that the players need to be Austrians and Franco Foda has to be able to nominate them for the Austrian national team. Furthermore, the men must have played in this season for at least 1015 minutes since otherwise, the data can’t tell us that much about them. Lastly, they need to primary play as wingers or wing-backs for their club.

I also added the filter that all wingers and wing-backs who play in Austria’s second division and are 23 years old or older will be eliminated, since a player who plays at this age and is still not in the Austrian Bundesliga, or an even more competitive league, will not be interesting for Foda and nor will he be in the upcoming months and years. So all the players in this data analysis who play in Austria’s second-tier are 22 years old or younger.

The German head coach of Austria mainly lines his team up in a 4-2-3-1 formation and prefers the pair of David Alaba and Valentino Lazaro on the wings. Since Alaba played mainly as a full-back and centre-back for Bayern Munich in the Bundesliga and the UEFA Champions League this season, he won’t be included in this data analysis. Lazaro played 1294 minutes for Inter and Newcastle United this season, and will also be an important player in this data analysis.

Since there are so many different metrics which are interesting when we talk about the wingers, we will have four graphs before we look at some players in more detail. In the first one, we use two statistics which tell us how often a player tries to go past opponents with the ball at his feet and how successful he is in it as we can see in the following graph. 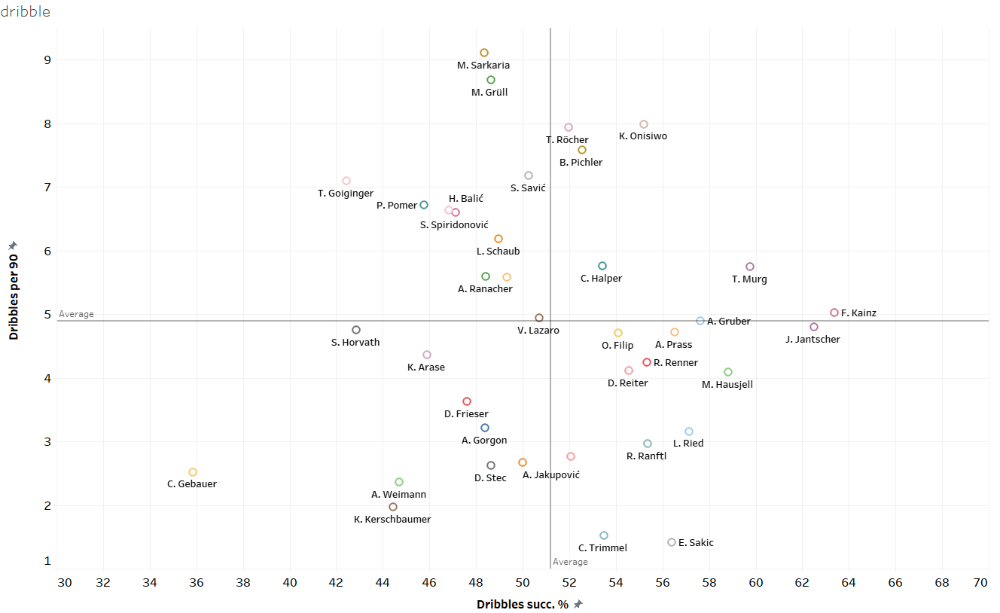 Manprit Sarkaria of Austria Vienna is the player with the highest number of dribbles per game with 9.11, but his success rate isn’t that outstanding (48.35%). Floria Kainz is with 63.38% completed dribbles, the player with the best success rate while Thomas Murg and Karim Onisiwo (who can play as a centre forward and a winger) have decent values for both categories. Meanwhile, Lazaro has stats of 4.94 attempted dribbles and a success rate of 50.7% in both categories’ average values. 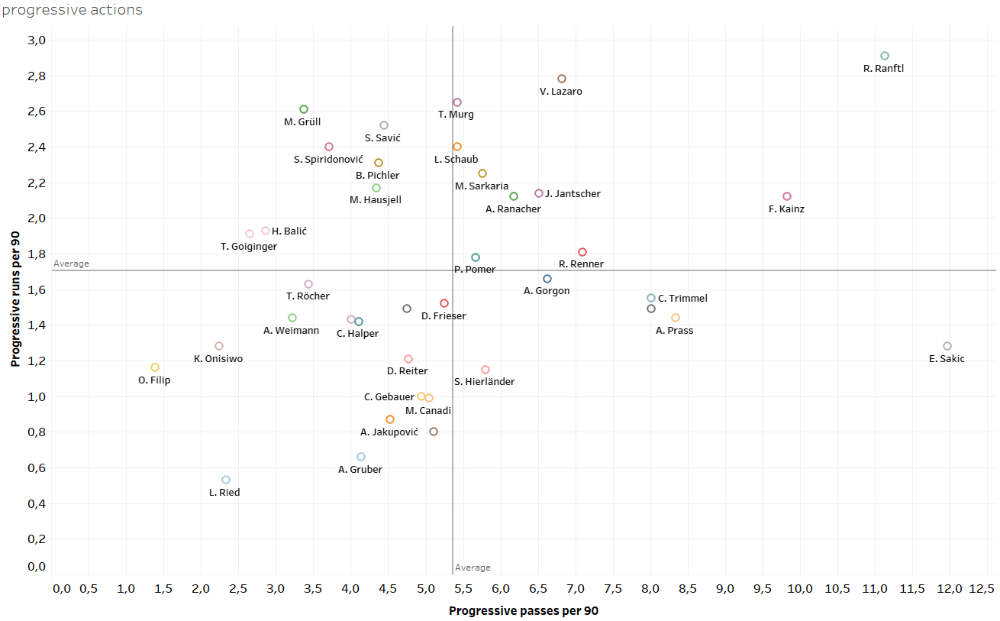 As expected, we get quite different results in this category as these two statistics don’t influence each other, while the number of attempted dribbles indeed has an impact on the success rate. Emanuel Sakic (wing-back of Sturm Graz) is the player with the most progressive passes (11.97) per match, but he rarely makes progressive runs. Reinhold Ranftl, who plays for LASK Linz as a right wing-back, has the highest number for progressive runs (2.91) per 90 minutes and the second-most progressive passes (11.13). Lazaro makes 2.78 progressive runs per match which is the second-best value while Murg and Kainz have again decent statistics. However, we always have to consider that not all players play in the same league.

Next, we want to know how they help their team by the creation of goalscoring chances and how they act in the final third respectively. For that, we use the passes to the penalty area per 90 minutes and the number of attempted crosses per game. The result is illustrated in the graph below. 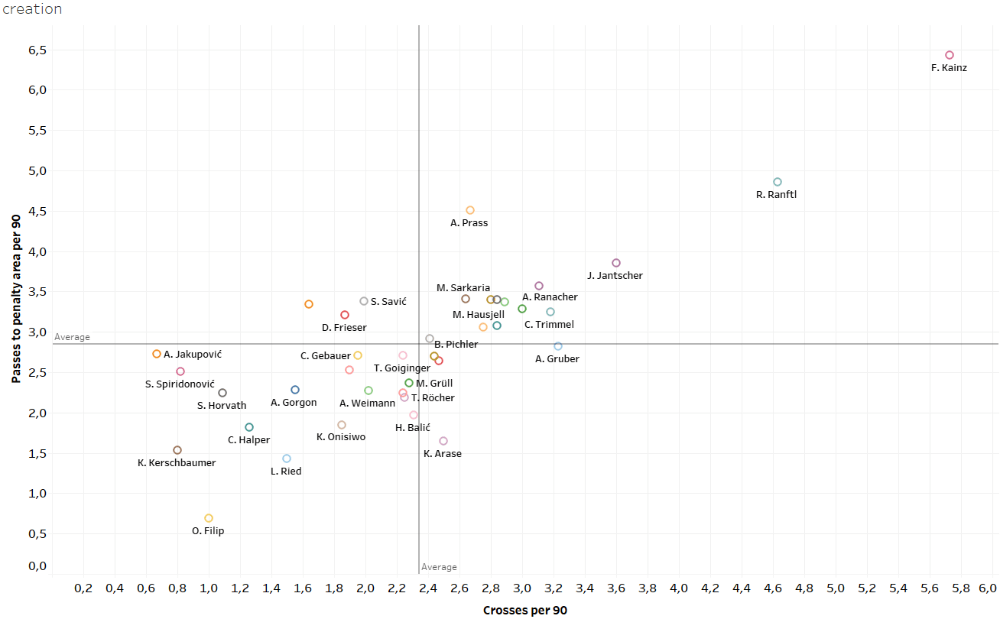 Kainz is for both categories the player with the highest number as he delivers 5.73 crosses per match and additionally plays 6.43 passes to the penalty area (both per 90 minutes). Ranftl is for both statistics the player with the second-best values as those two again stand out. Alexander Prass (18-year-old winger and striker of Liefering) has the third-highest number of passes to the penalty area (4.51) while Jakob Jantscher is the player behind Kainz and Ranftl who delivers the third-most crosses (3.6).

In the last graph, we will look at the expected assists (xA) and expected goals (xG) per 90 minutes to see which players are directly involved in the creation of goalscoring chances or even the ones who get into these situations. 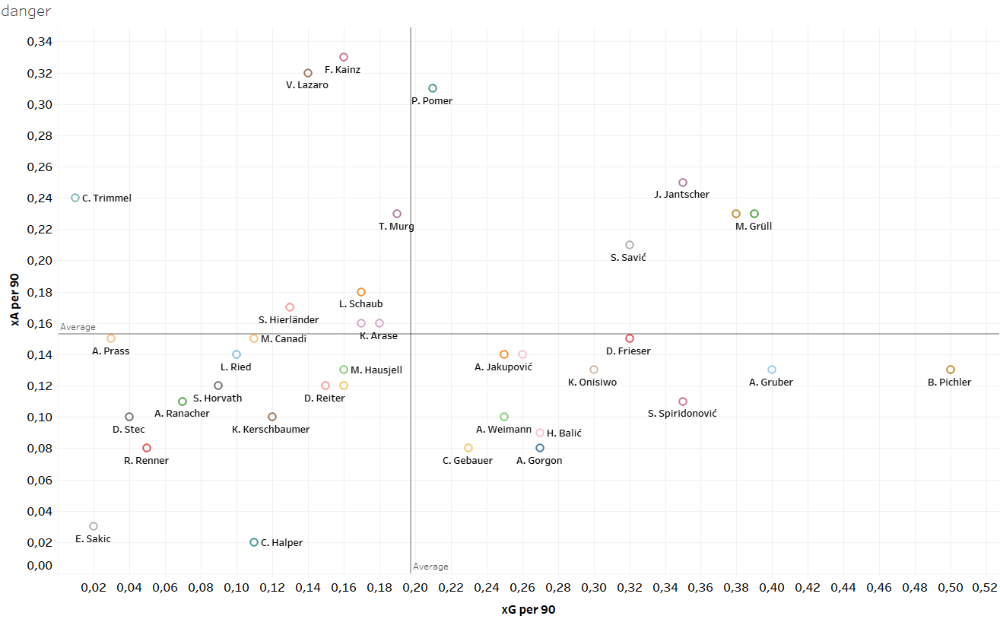 Kainz (0.33) and Lazaro (0.32) are the two players with the best xA per 90 minutes while Benedikt Pichler is the most dangerous one in front of the goal and the one who comes most frequently in good positions respectively with an average xG of 0.5 per 90 minutes, and he’s just 22 years old. Jantscher, Sarkaria, and Marco Grüll are three men who also have good values for both statistics.

Next, we will look at the four men who stood out and additionally, we will talk about Prass since the data tells us that he is the most promising winger of Austria. 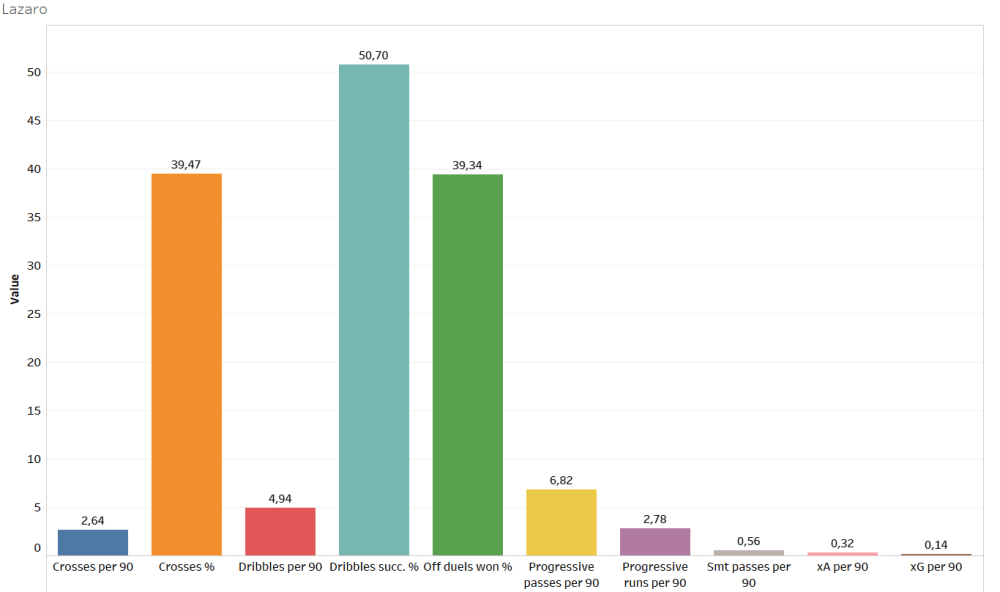 Lazaro is not only one of the Austrians with the highest market value, but also one of the very few who already play on a high level outside of Austria and Germany. He joined Inter in the summer of 2019 but moved in the winter transfer window to Newcastle United since he was only number two behind Antonio Candreva for Antonio Conte.

The 24-year-old can play as a wing-back, offensive midfielder, and winger, and he prefers the right side. He’s a real all-rounder and incredibly strong on the ball, which also explains his high number of progressive runs per 90 minutes (2.78). Lazaro isn’t a player who often goes for the goal by himself but tries to find his teammates in a better position. This also explains his low value for expected goals (0.14) and the decent number of expected assists (0.32). At this point, you also need to consider that these are the statistics for his appearances in the Serie A and the EPL, while the other men mainly play in Austria and Germany. 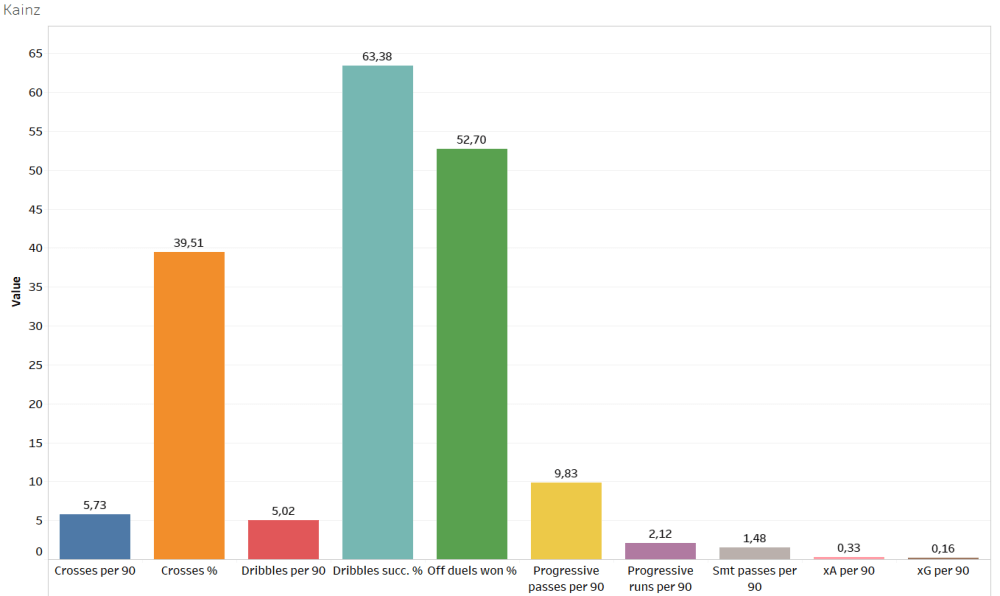 The 27-year-old winger stood out in every graph in this data analysis since he is always among the players with the best statistics. Especially when we look at the number of crosses (5.73) and the passes to the penalty area (6.43) per 90 minutes, he is by far the player with the highest values. The astonishing thing at this point is that he plays for FC Koln who have heavily struggled this season. He also wins 52.7% of his offensive duels and 64.18% of his defensive duels which shows us that he is strong in the duels. With 1.48 smart passes per game, he is additionally amongst the Austrian wingers who have the highest values in this category. 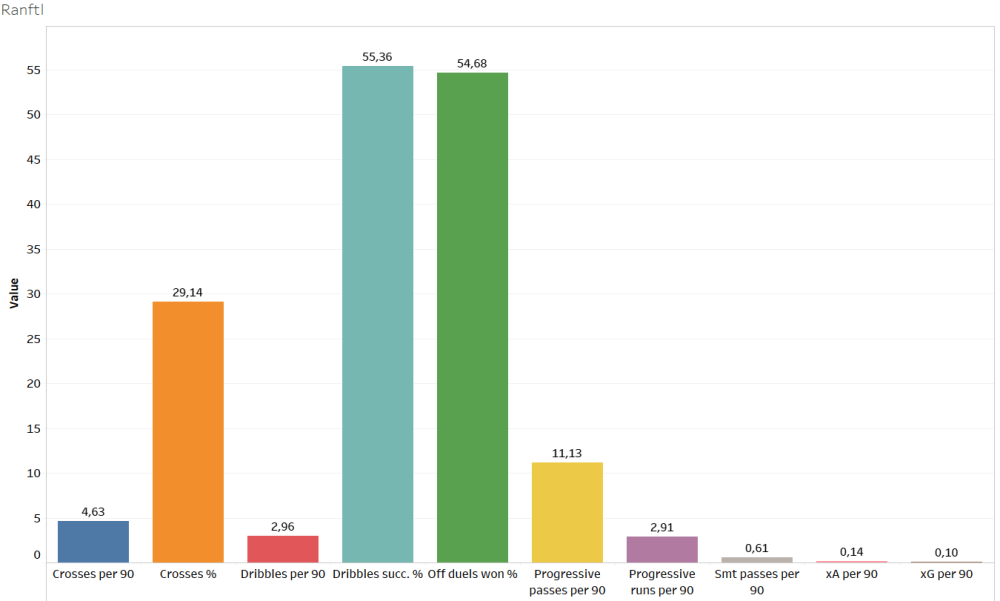 Ranftl is an important player for LASK Linz and one of the factors why they performed very well this season. As the right wing-back, he is quite offensive-orientated as we already saw earlier in this data analysis. Especially when it comes to the progressive actions, Ranftl is incredible and stood out above with 11.13 progressive passes and 2.91 progressive runs per 90 minutes.

While he has a decent success rate for his dribbles as he completes 55.36% of them, he clearly needs to work on his crosses as only 29.14% of them find a teammate in the centre. 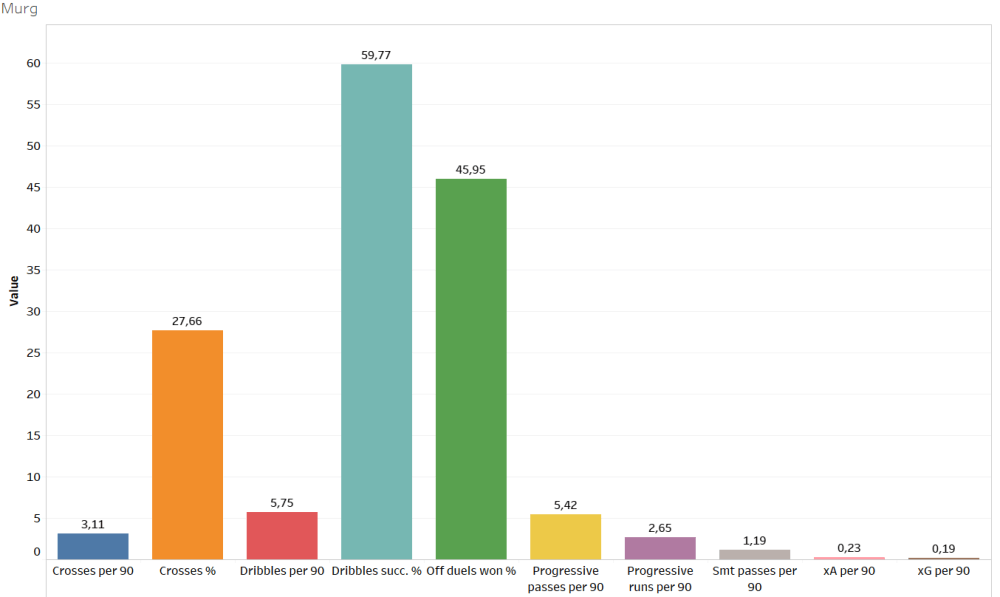 Murg is currently the star of Rapid Vienna and even though he showed decent performances within the last few seasons, he hasn’t made a single appearance for Austria yet. One of his greatest strengths is indeed his dribbling which also gets visible when we look at his stats. 59.77% of his 5.75 attempted dribbles per 90 minutes are successful and, in both categories, he is clearly above the average.

Just like Ranftl, he should work on his crosses since only 27.66% of his 3.11 deliveries are successful, according to the data. With 1.19 smart passes per game and an average xA value of 0.23, he seems to be a player who knows how to put his teammates in good positions and situations respectively. 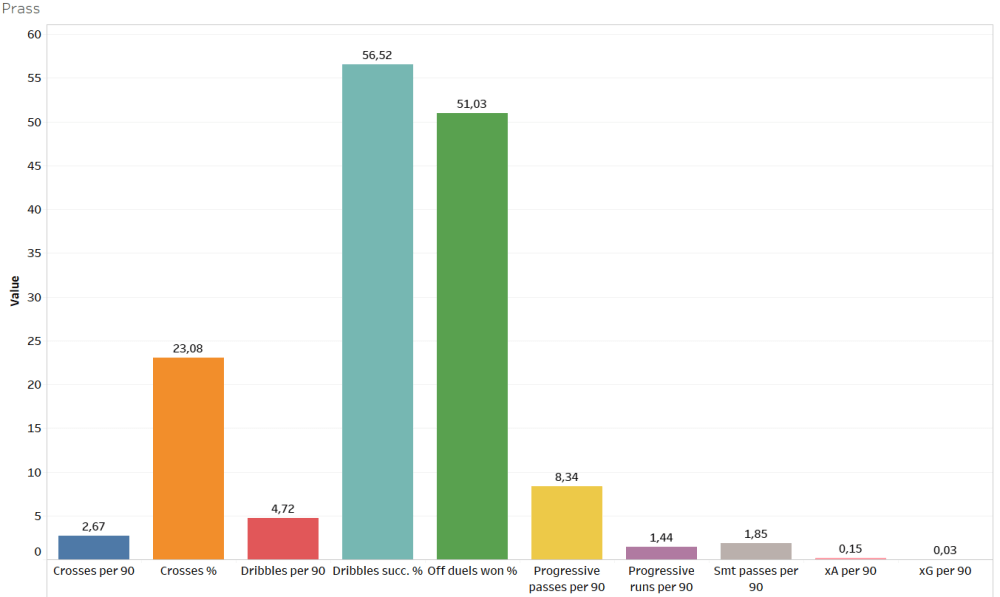 Prass is by far the youngest player of the five Austrians at which point we take a more detailed look. However, even though he is just 18 years old, he is among the best players of Austria’s second division, indeed one of the most interesting wingers of Austria and currently plays for Liefering (RB Salzburg’s second team). Considering this, it’s probably just a matter of time until we see him in the Austrian Bundesliga. Also, since Liefering plays with a 4-3-1-2 formation, he never plays as a real winger but mostly as a striker or central midfielder and we can often see how he drifts to the outside. Prass can play in several positions which makes him an even more interesting player.

The 18-year-old is among the players with the highest success rate for dribbles with 56.52% and additionally, he wins 51.03% of his offensive duels which is a decent value. He is not such a dangerous player in the final third as his values for expected goals (0.03) and expected assists (0.15) indicate. However, he has, with 4.51 passes to the penalty area, the third-highest value in this category.

Besides Lazaro who is an important player for Foda in the national team; Ranftl, Murg, and Kainz were the other three players who clearly stood out in this data analysis even though none of them are regular starters for Austria. This will probably change within the next few months and years if they can continue to show those good performances.

Prass is, according to the data, the most promising Austrian winger, but he can also play in different positions as he is a quite variable talent. In the next and last data analysis, we will search for the best strikers of Austria.