This is the fourth data analysis of my series in which I look at the best Austrian players in the respective positions. We already looked at the centre-backs, full-backs, and defensive midfielders. In this analysis, we will use data and statistics to find the best offensive midfielders of Austria. Within the last three data analyses, we found young interesting players besides the ones who are already an important part of the Austrian national team.

In this data analysis, we will use stats to find the best, current offensive midfielders of Austria and additionally we’ll probably find promising talents who will become solid number 10s in the upcoming months and years. All statistics in this data analysis are the average values per 90 minutes.

Before we look at several statistics to find the best offensive midfielders of Austria, we will again shortly talk about the filters which were used to find the pool of players with which we will work. Firstly, all of the following players are logically Austrians who can or could play for the Austrian national team. Furthermore, to only get the players who get enough minutes at their club, the second filter will be only the players must have played 1015 minutes in the season 2019/20.

Since Foda mainly uses a 4-2-3-1 formation in the Austrian national team, there is place for only one offensive midfielder and Marcel Sabitzer is indeed his first-choice player in this position.

Since there are so many different types of players in the role as a number 10 and some of them play as a central midfielder (slightly deeper), we will use quite a few statistics to find with the aid of the data, the most interesting Austrians in these positions (central or offensive midfielder). Dribbles and passes are two of the first actions which come to your mind when you think about these players. Because of that, we will look at the values for these two abilities at the beginning. In the graph below, we look at the number of passes per 90 minutes as well as the accuracy. 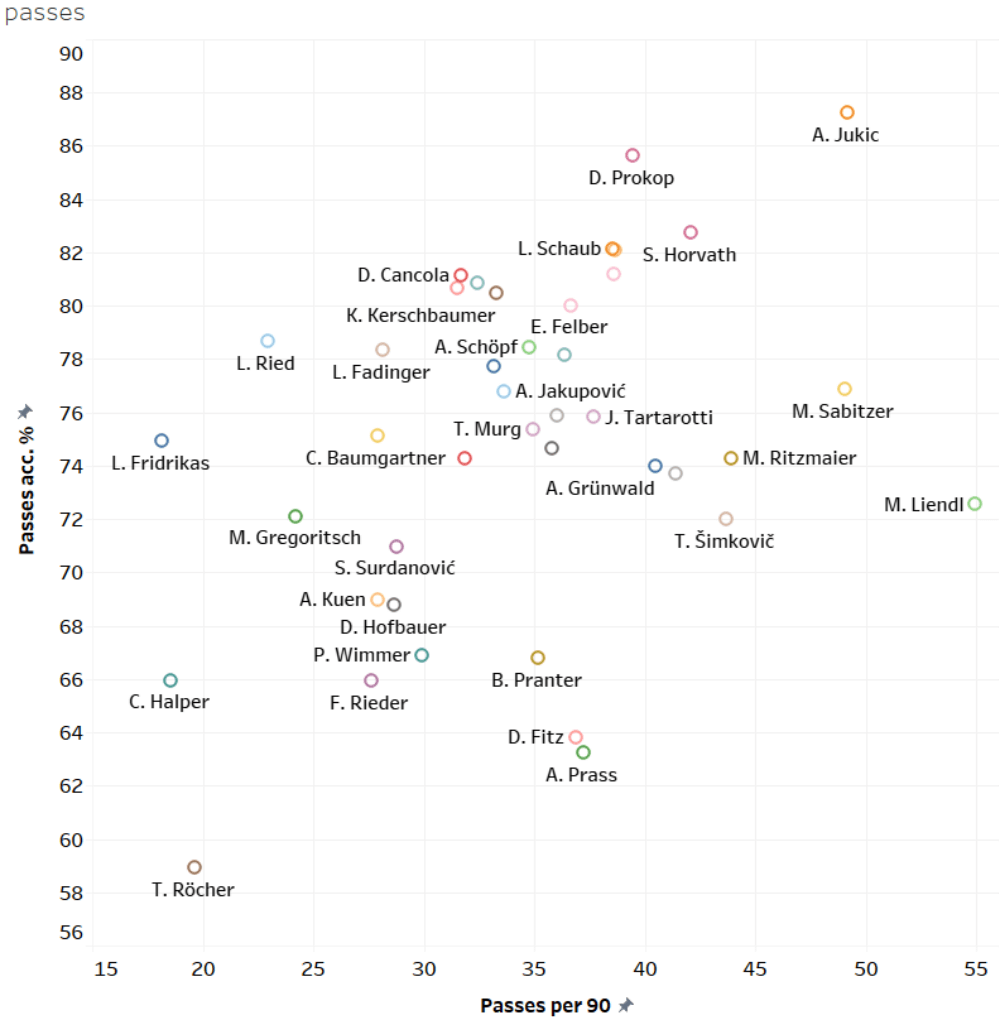 Aleksandar Jukic of Austria Vienna II is the player who stands out in this graph as he has the highest success rate (87.23%) while Michael Liendl is the one with the most-attempted passes per game (54.93). That’s not such a huge surprise when you know how important the 34-year-old is for Wolfsberger AC. Sabitzer also has decent values as he plays on average 49.02 passes per game with a success rate of 76.86%.

In any case, you need to consider here and in the rest of this analysis, that these men play in different leagues and that’s important when you look at their data. While Jukic plays in Austria’s second division and Liendl in the Austrian Bundesliga, Sabitzer is the one of these three who plays in the most competitive league of these three: the German Bundesliga. Due to that, his values are even more amazing.

Next, we use the statistics for the attempted dribbles as well as the success rate of them in % to find the best dribblers of Austria. 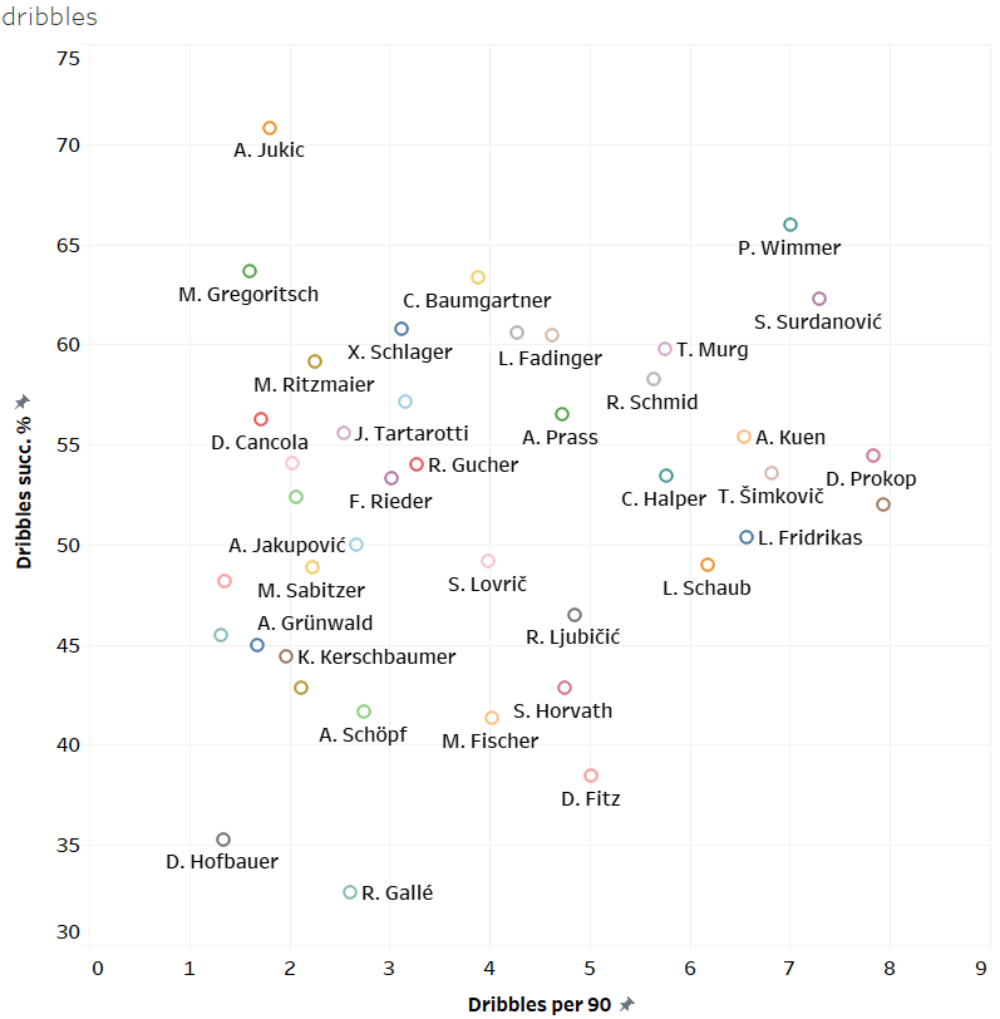 Patrick Wimmer is 18 years old and made 15 appearances for Austria Vienna II in this season, and six for their first team. He is among the players in the graph above who have decent values for both categories. He starts 7.01 dribbles per 90 minutes with a success rate of 65.98%. Jukic is again the player with the highest success rate, but you have to consider that he makes just 1.81 dribbles per match which is a really low value. Thorsten Röcher (underneath Dominik Prokop) is the player with the most attempted dribbles per 90 minutes with 7.94.

However, neither in the first graph nor in the second one can we know which kind of passes and dribbles the Austrians make. Due to that, these two graphs don’t tell us that much about if the player creates anything in the final third which is an important part of an offensive midfielder’s role.

Due to that, we will now look at two metrics which tell us more about the type of passes the Austrians play: through passes and deep completed passes. 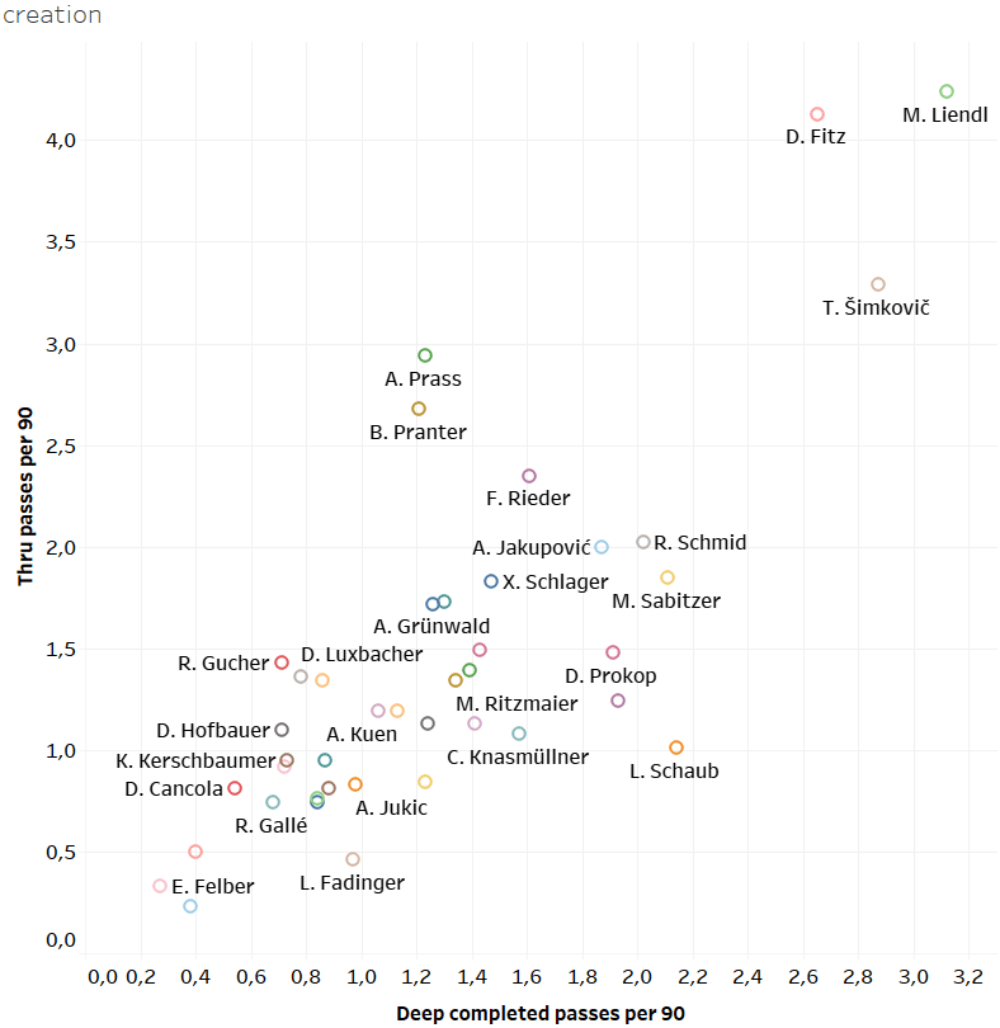 As the last point, we will now take a look at data which should tell us how dangerous the Austrians are in the final third and in front of the goal respectively. Since some offensive midfielders are strong in assisting and some want to go for the goal by themselves, we will use their values for expected assists and expected goals to find both types and also some who are strong in both. 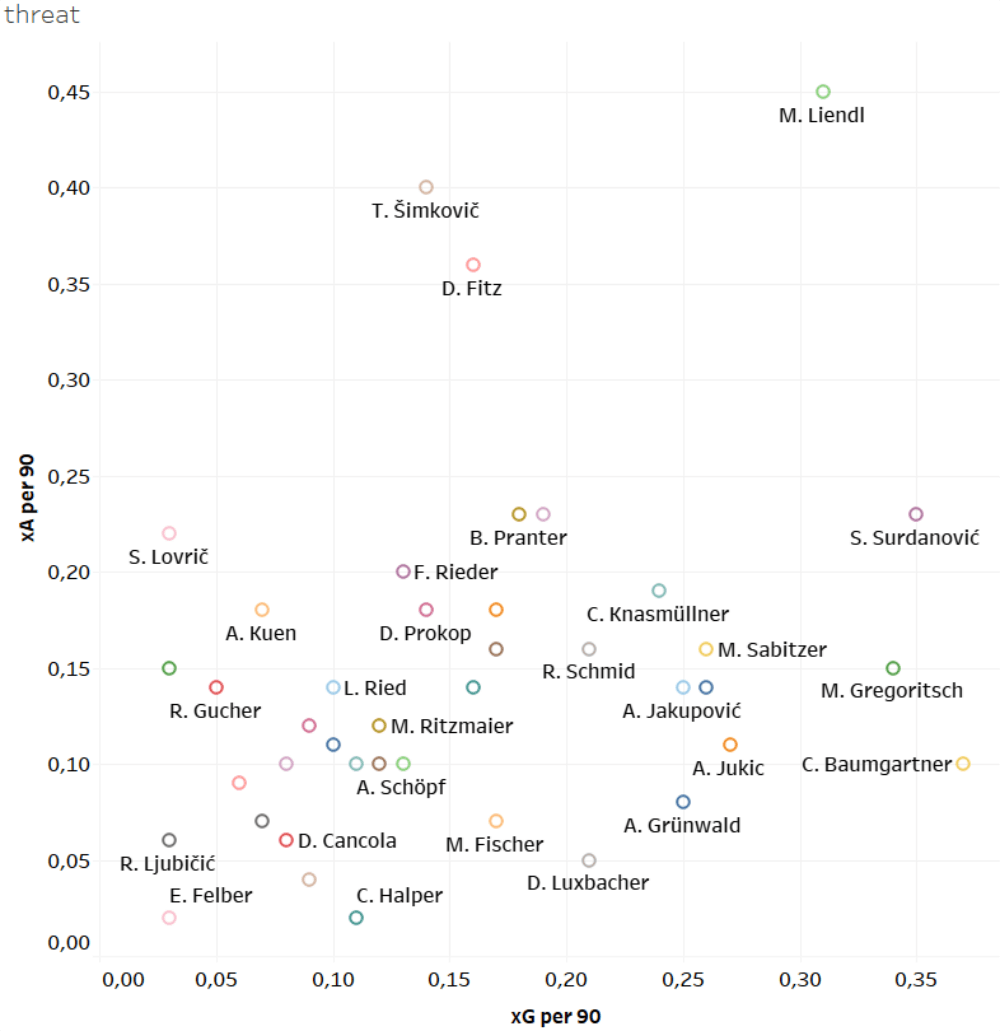 The 34-year-old Liendl is again one of the offensive midfielders with the highest values as he has a value of 0.45 for expected assists and 0.31 for expected goals. Christoph Baumgartner who is just 20 years old, but already scored four goals in this season in the Bundesliga for Hoffenheim, has the highest value of all players for xG (0.37).

Next, we will look at four interesting offensive midfielders in more detail. 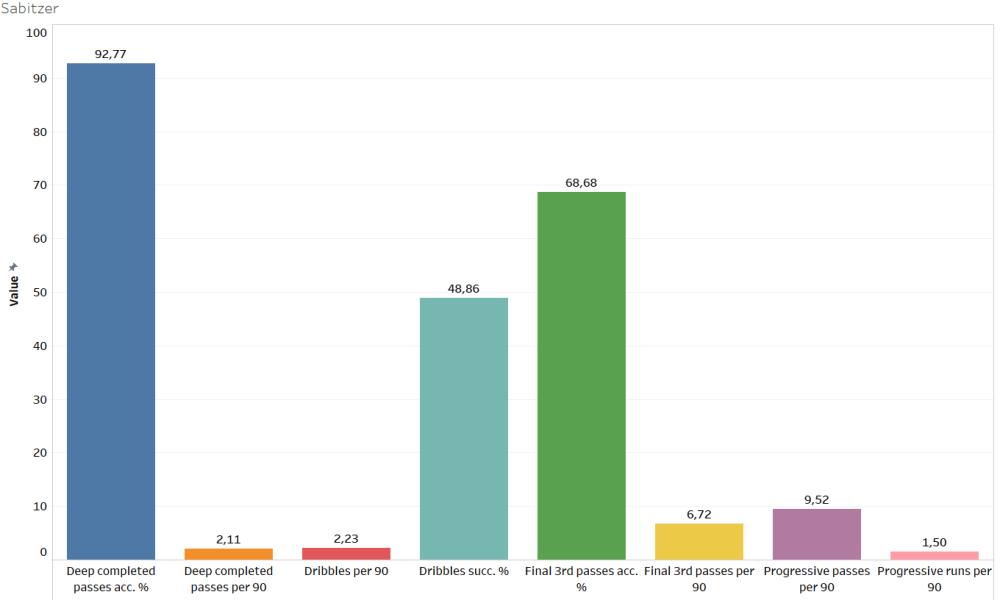 The 26-year-old showed great performances in this season under his new head coach Julian Nagelsmann in the Bundesliga and the UEFA Champions League and is the first-choice number 10 of Foda. Even though he is with the highest value for deep completed passes per 90 minutes among the offensive midfielders of Austria, he has an amazing success rate with 92.77%.

Also, he is the player with the third-most progressive passes per 90 minutes with 9.52 and he plays an overall of 49.02 passes per game. Only Liendl and Jukic play more passes and these two statistics show us that Sabitzer is really important for RB Leipzig’s progression of the ball. You also need to consider that Sabitzer plays under Nagelsmann not only as an offensive midfielder, but mainly in a deeper position as he is incredibly variable. 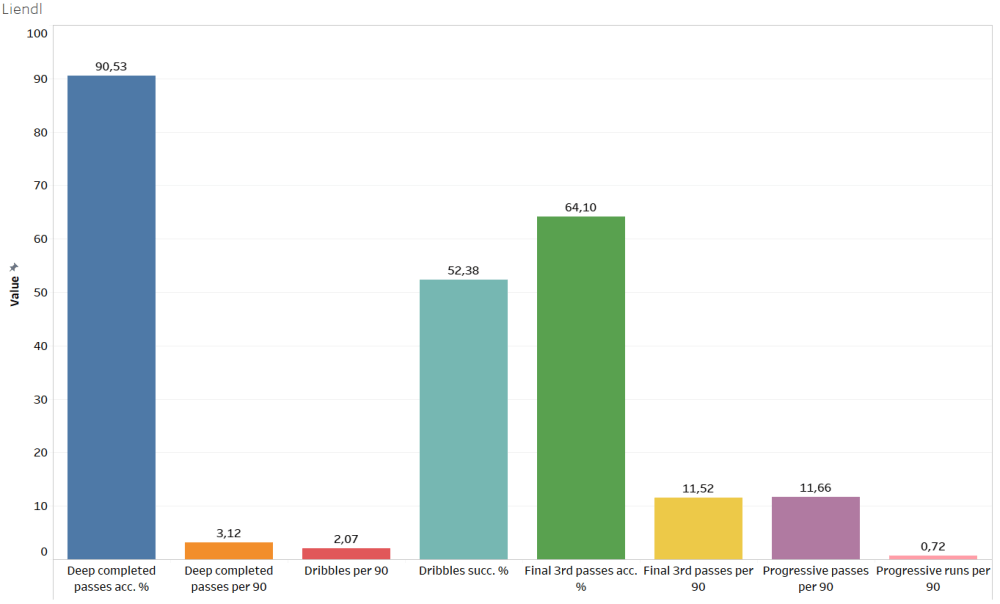 In this data analysis, he stood out several times as he plays 54.93 passes per game, has a number of 0.45 for xA per game, plays 3.12 deep completed passes, and 4.24 through passes per game. All of these numbers are the highest values of their respective categories. Furthermore, he plays the most progressive passes per game (11.66) but only made one appearance for the Austrian national team in his career (2014 under Marcel Koller). Considering his great performances in this season, he could be a realistic option for Foda in the upcoming months and probably the Euros 2021. 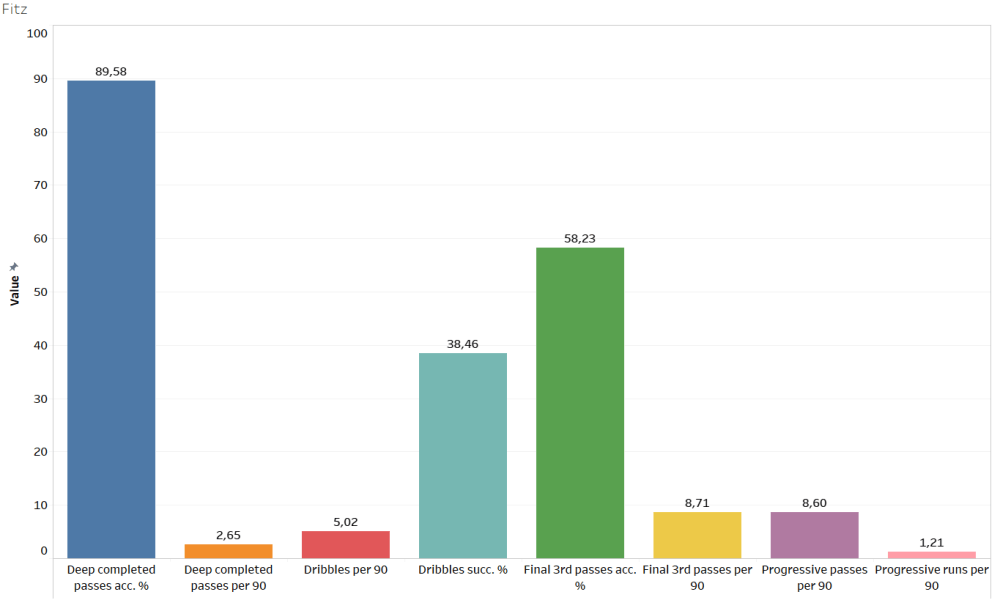 Even though Fitz is only 20 years old, he is one of the few positive aspects of Austria Vienna’s bad season. He made seven assists in this season, which is the highest value of all players of Austria Vienna. He is a classic number 10 who wants to have the ball at his feet as often as possible and is a great passer of the ball. He clearly needs to work on his dribble abilities as he only completes 38.46% of his dribbles.

However, his activity in the final third is awesome for a player at his age as he has an average xA value of 0.36 per 90 minutes, plays 4.13 through passes, and 89.58% of his 2.65 deep completed passes per game are successful. Fitz played for all the youth teams of Austria and showed good performances for Austria Vienna within the last few months. Due to that, it would be no surprise if he makes his debut for Austria under Foda within the next year. 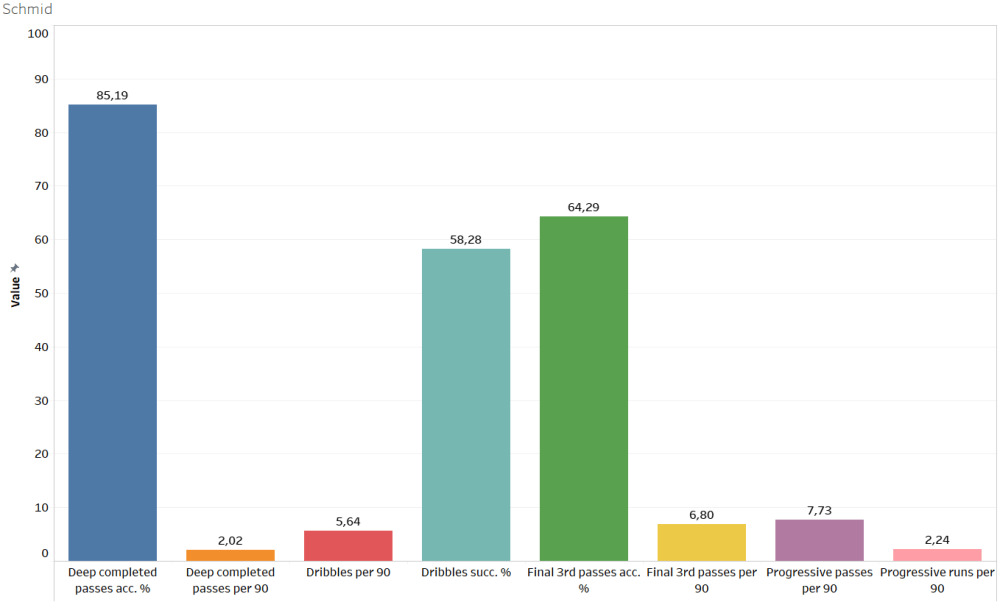 Even though Schmid plays at Wolfsberger AC as a central midfielder in their 4-3-1-2 and is incredibly flexible, I’ll include him in this data analysis as he is among the best players in almost every statistic but never has the absolute best value. He played in 21 out of the 22 games this season and missed no single group stage match in the UEFA Europa League against Istanbul Basaksehir (second position in the Süper Lig), Gladbach (fourth position in the Bundesliga), and Roma (fifth position in the Serie A). Additionally, he played in three games for Austria’s U21 this season.

With 5.64 dribbles per game and a success rate of 58.28% for these, he is among the best dribblers in his position and these statistics show us how confident he is on the ball. With 2.02 deep completed passes and 2.02 through passes (both per 90 minutes), he is in both categories one of the Austrian offensive midfielders with the highest values. So, we can see that Schmid is strong on the ball but also knows when and how to find his teammates in the right moments.

Also, with a value of 0.16 for expected assists and 0.21 for expected goals, we can see that he can get dangerous in front of the goal by himself, but also assist his teammates.

While Sabitzer is clearly currently the best Austrian offensive/central midfielder, Liendl played an incredible season so far and it will be interesting to see how long he can continue to show performances on this level. He will turn 35 in six months and this is likely a reason why Foda won’t nominate him anymore for the Austrian national team.

Fitz and Schmid are only two of several young and talented Austrian midfielders who are already important for their teams. Baumgartner, Jukic, and Prokop are three other players who could become really good in the future, but their metrics are not that great overall as Fitz’s and Schmid’s. At this point, you again need to add that they play in several leagues and it will be interesting how important Baumgartner can become for Hoffenheim