Ever since the former Liverpool manager Brendan Rodgers took over at Leicester City, the team has improved drastically and has become a regular top-four contender over the past two seasons. The Foxes missed out on a UEFA Champions League spot last season on the last day, but are looking well-placed to make a return to Europe’s marquee competition for the first time since the 2016/17 season

Attacking players usually get a lot more credit than their defensive counterparts, and so while the likes of Harvey Barnes, James Maddison and Kelechi Iheanacho have been excellent for the Foxes this season, it must be noted that one of their most crucial players over the last couple of seasons has been the Nigerian defensive midfielder Wilfred Ndidi.

The Lagos-born Nigerian international began his career as a full-back, but has blossomed into one of the best in the Premier League at his job, which is to protect his defence and break up opposition attacks. In this scout report, we will look at Ndidi’s traits, strengths and weaknesses, and examine how he has become so important to Leicester’s tactics.

Ndidi is a largely conservative defensive midfielder, having little responsibility in Leicester’s attacking play. Rodgers has also used ball-playing centre-backs such as Jonny Evans and Çağlar Söyüncü to help Leicester’s build-up, which has reduced the need for Ndidi to do much more than recycle possession during this phase of the game. 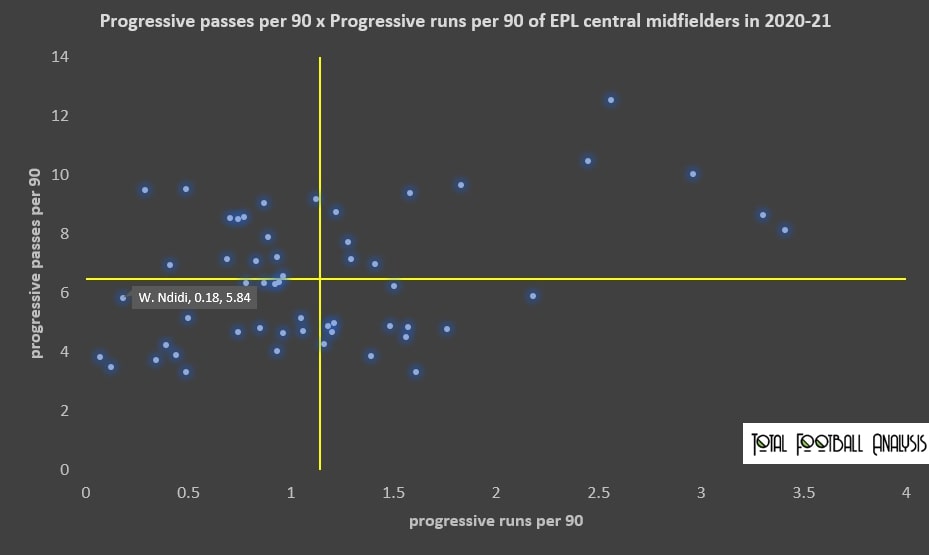 This suggests that Ndidi does not play an aggressive role in possession, and his role is more as a facilitator to enable Leicester’s better midfielders, such as Youri Tielemans and Maddison, to get on the ball frequently whenever possible. 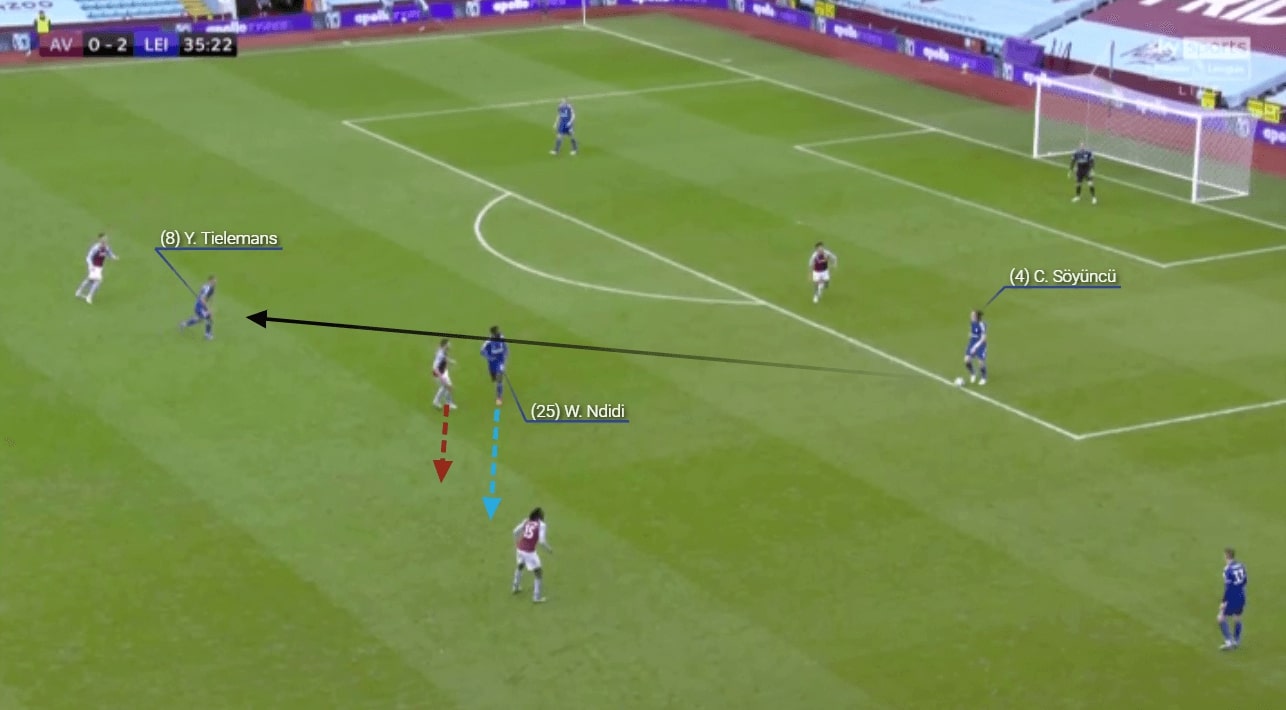 However, even not getting on the ball, Ndidi could still contribute to the build-up plays in several ways. The first one is to unmask a passing lane for the teammate. If Leicester were trying to develop the attack from the centre, Tielemans often dropped deeper to receive while the job for Ndidi was to move away to create spaces.

In this screenshot, Ndidi moved diagonally to the left, bringing away the marker. The movement would leave spaces for his Belgian fellow to receive the pass from Söyüncü. If he did not move, that space would be crowded as the Aston Villa marker also stayed inside. 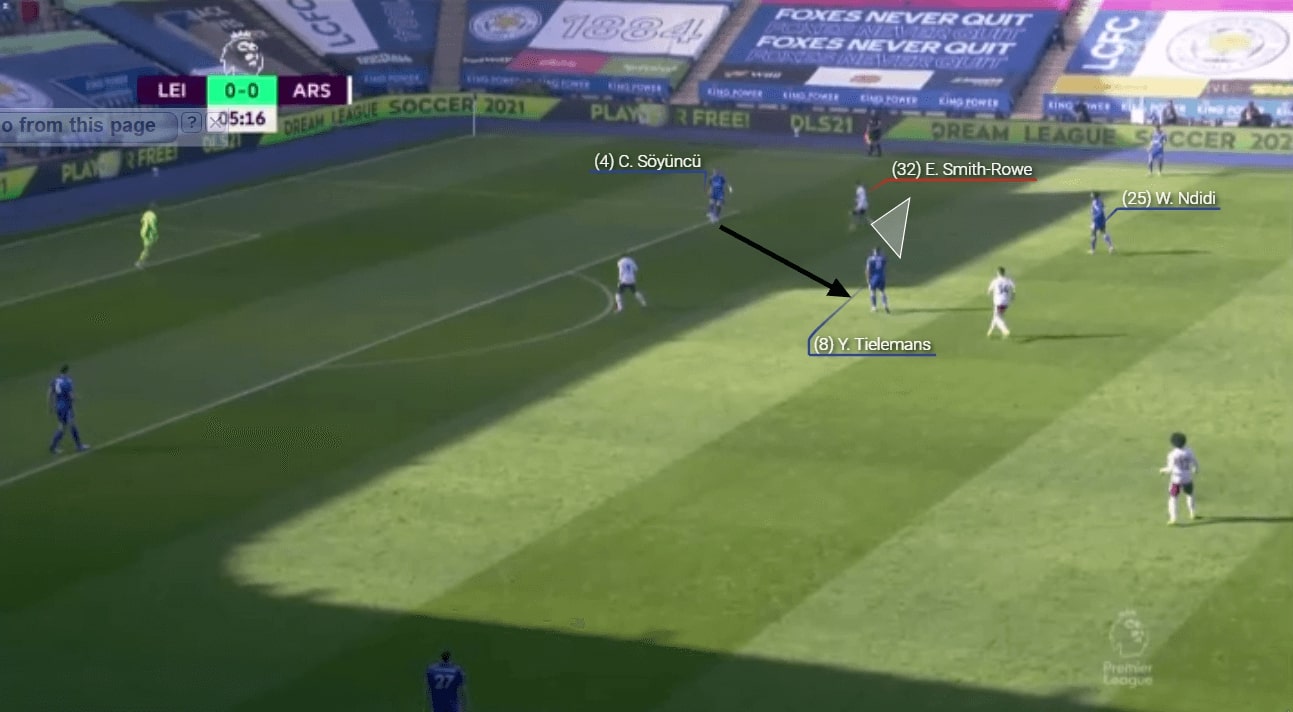 Apart from using movements to unmask a passing lane, sometimes Ndidi could also achieve similar effects by positionings. Against teams defending with a 4-4-1-1 or using an offensive midfielder to man-mark a pivot, the positioning of Ndidi would be crucial to manipulate the marker’s position.

For example, Emile Smith-Rowe of Arsenal was the marker of Ndidi in this scenario. The Nigerian midfielders’ drop was to stay to provide a vertical option for the centre-back. If Smith-Rowe tried to shut the vertical passing lane at half-spaces, this means the central areas were free with an opened diagonal passing lane. Hence, Tielemans could drop and receive in spaces again. 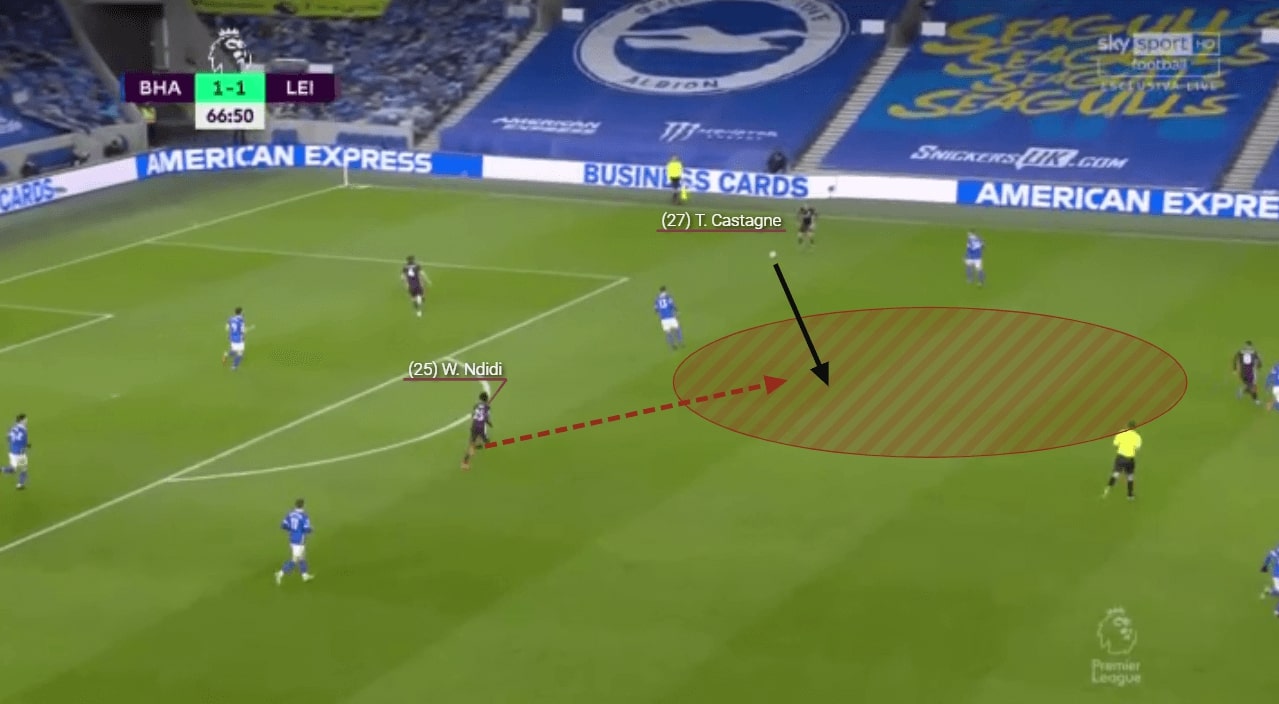 Despite being a passive player, avoiding receiving the ball unnecessarily in the first phase, Ndidi has shown improvement to become a proactive player to help his teammates. Under Rodgers, the Nigerian international has developed better offensive senses, polished his ability to read spaces and use them.

For example, this example against Brighton shows Ndidi’s proactiveness to enter spaces. When the opposition pressed high but there was a gap between the lines (red zone), Ndidi read that region and move into it. This opened a diagonal passing option that did not exist initially for Timothy Castagne. Thanks to Ndidi, the Foxes broke the press and advance to the midfield easily.

Ndidi was praised as a “brick wall” by his teammate James Justin after beating Tottenham Hotspur in the league this season. He is physically strong and good at defending, and his main job on the pitch is to protect the backline. Rodgers trusted him and therefore always playing him if he is fit. 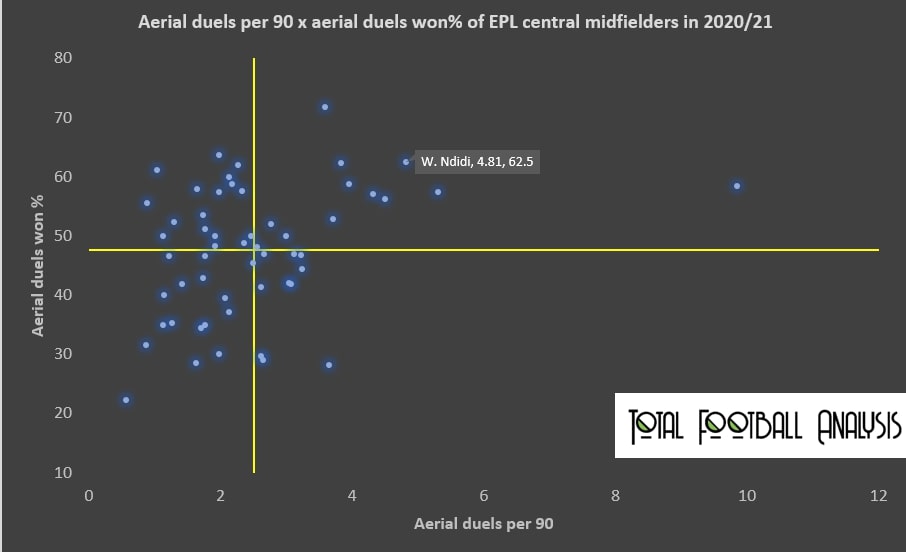 As mentioned above, because of his strong body physique, he was designed as a critical part of Rodgers’ second ball structure. 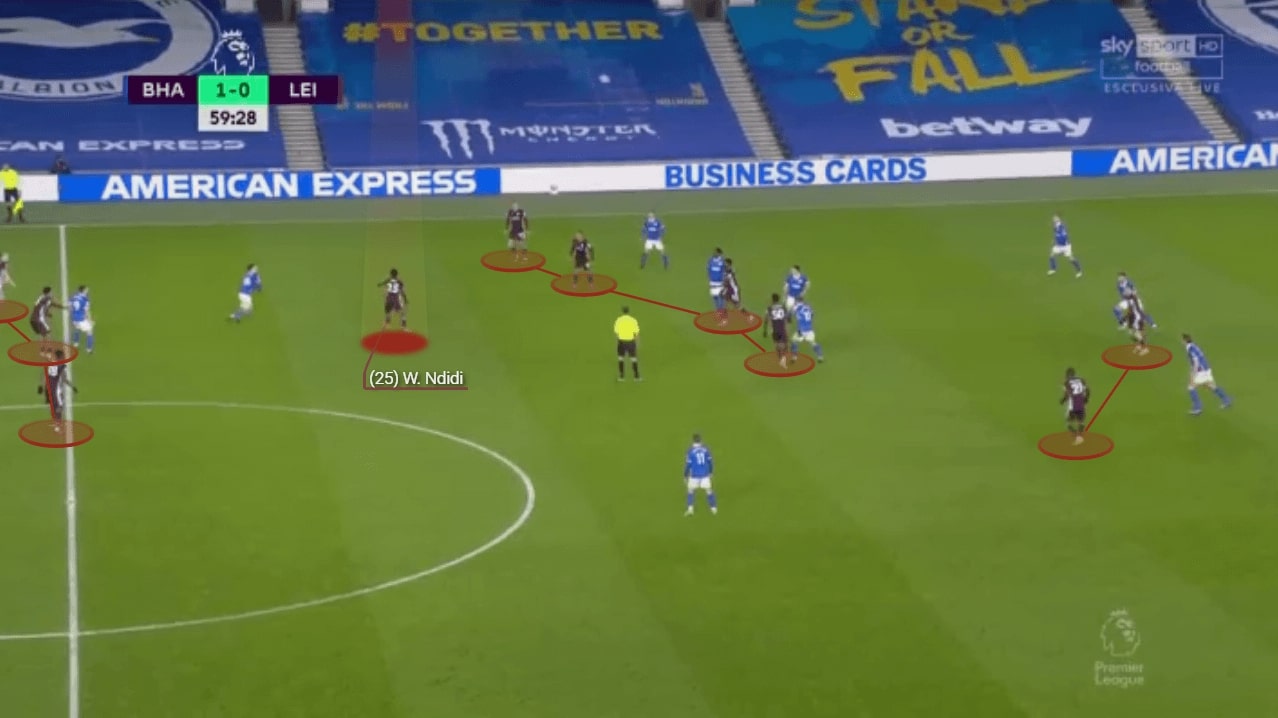 As an example, we give the offensive second ball structure of Leicester in this image. The team hold a 3-1-4-2 formation, or you may interpret as a 3-1-5-1. This shows how his manager trusted him and gave him an important role. As the only player in front of the centre-backs, Ndidi must be able to pick the second balls in large areas or else the Foxes could concede a counter with a high line.

The image shows the positional awareness of Ndidi as he actually looked at the opposition behind. The scan checked the contender’s position and would give the Nigerian international a better idea on how to orient himself. If he got the positioning right, the chance to win the duel would be higher as well. 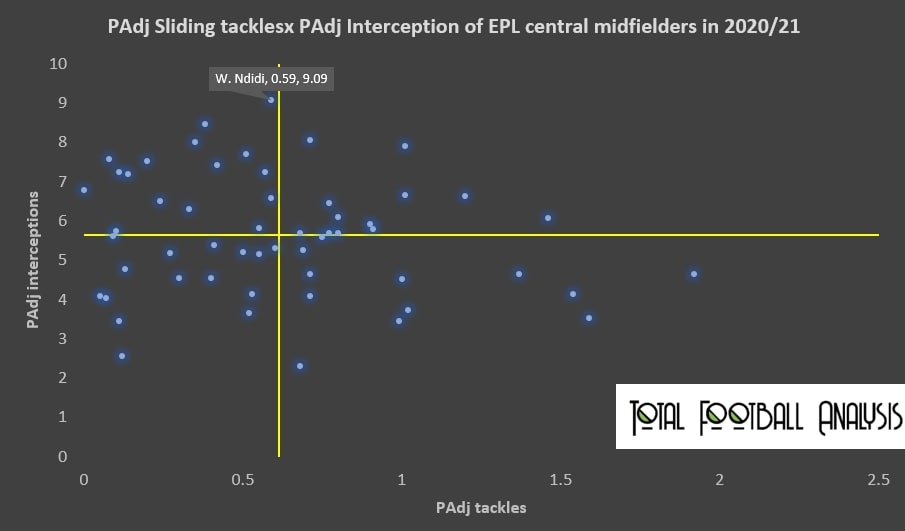 The other scatter diagram of this section includes PAdj Sliding tackles and PAdj interception data of central midfielders in the Premier League this season. Ndidi had interesting stats and rankings on the chart as his 0.59 PAdj tackles was lower than the mean. Of course, it suggests sticking out his leg to kick the ball was not the habit of this player. It was just a style and even ranking badly in this metric was not suggesting the player is bad.

In terms of PAdj interceptions, Ndidi contributed 9.09, more than any of his counterparts in England. It was a promising indicator and it shows his ability to recover possession. 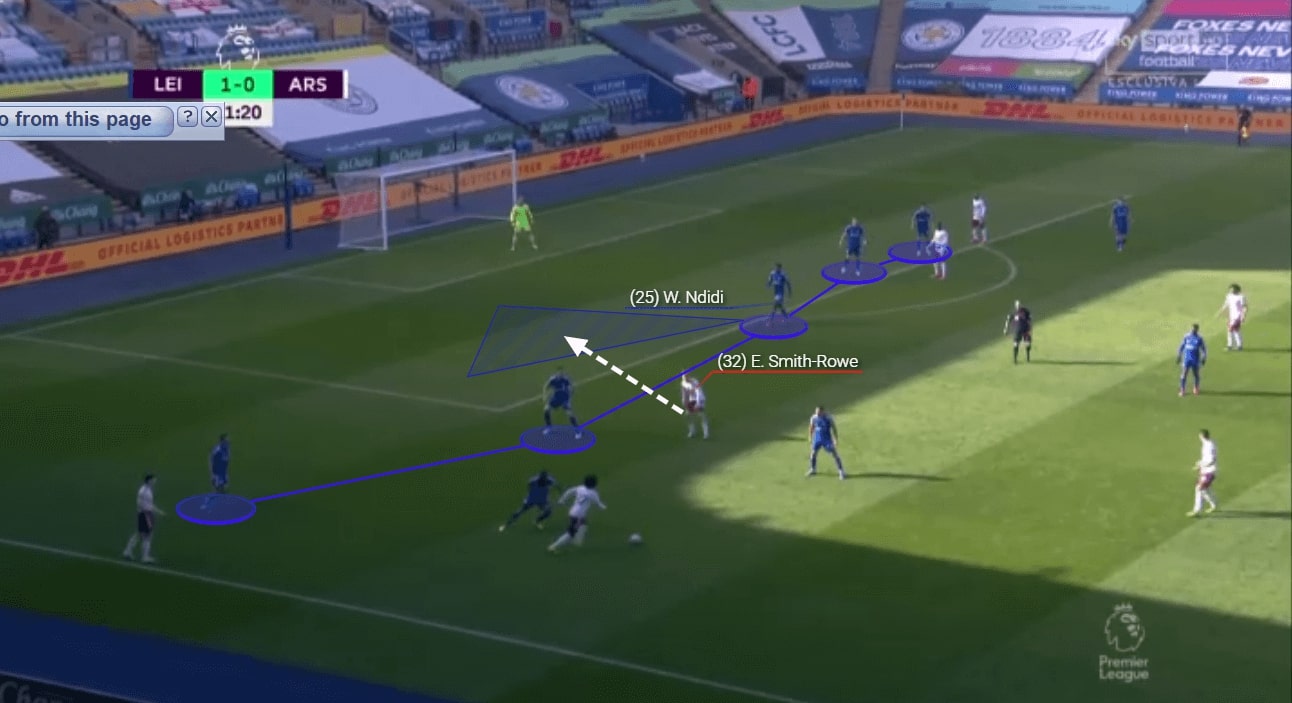 When defending in a low block, Ndidi’s presence was key as well. Since Leicester was a team that initially shutting the central areas to force the opposition go wide, their defenders, especially wide centre-backs and full-backs often pressed outside. This means spaces inside were to be protected by the midfielders.

Ndidi, as the only defensive midfielder of the team, must be discipline and clever to choose the right position. Since the defensive line of Leicester shifted laterally to help each other, there would be horizontal gaps or isolated centre-back(s) in the box. Ndidi’s job was to cover those spaces or add numbers to keep the block compact.

In this example against Arsenal, two Foxes moved outside to defend the wide players of Arsenal in advance. 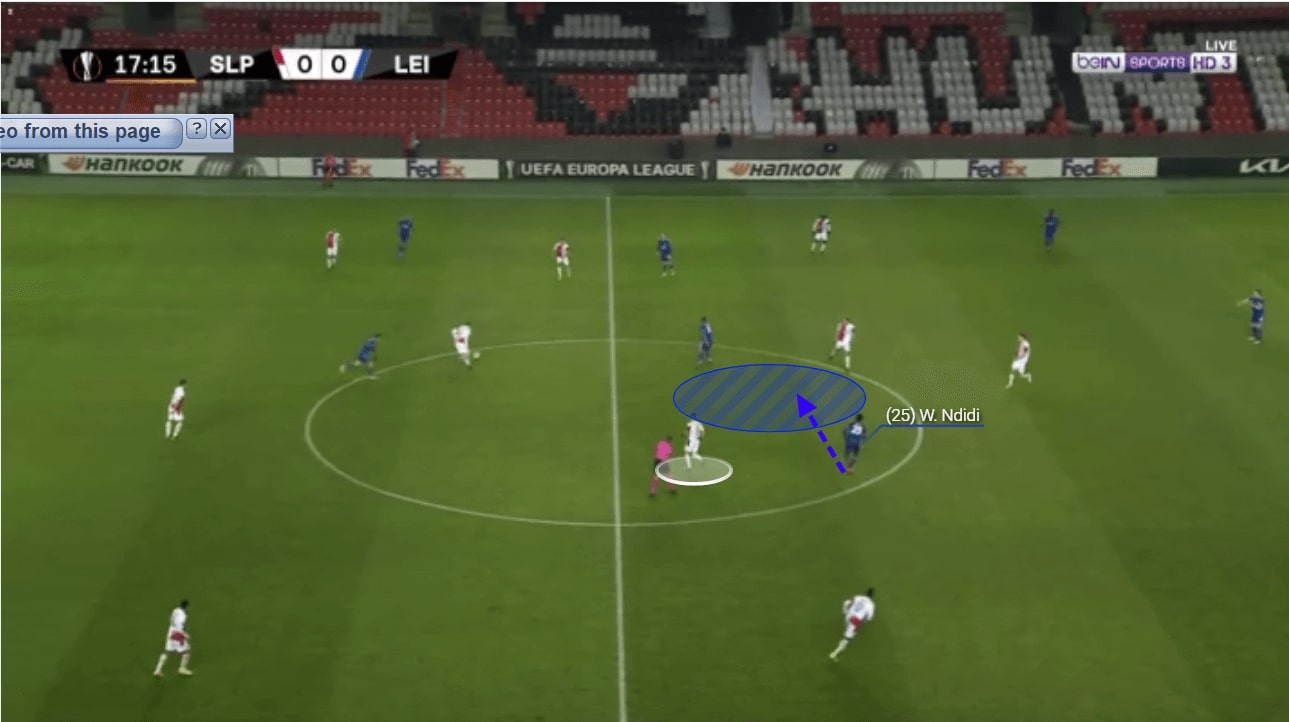 As the defensive midfielder for Leicester if they were playing with a 4-1-4-1, Ndidi’s positioning would be vital as he was the only one in front of the centre-back. Rodgers was convinced to play him alone as the Nigerian midfielder also had the defensive awareness and spatial recognition to cover areas. When required to defend spaces, Ndidi could make good decisions to optimize the defending of the team.

For example, the image from the Slavia Prague match shows how he was able to cover spaces. Despite having an opposition in front of him (highlighted in white), he knew the job was not man-mark a target. Instead, he anticipated potential receivers around the ball, trying to access as many passing options as he could. In this situation, he recognized spaces behind Tielemans was more vulnerable, so he went inside and successfully intercepted the forward pass at the centre. 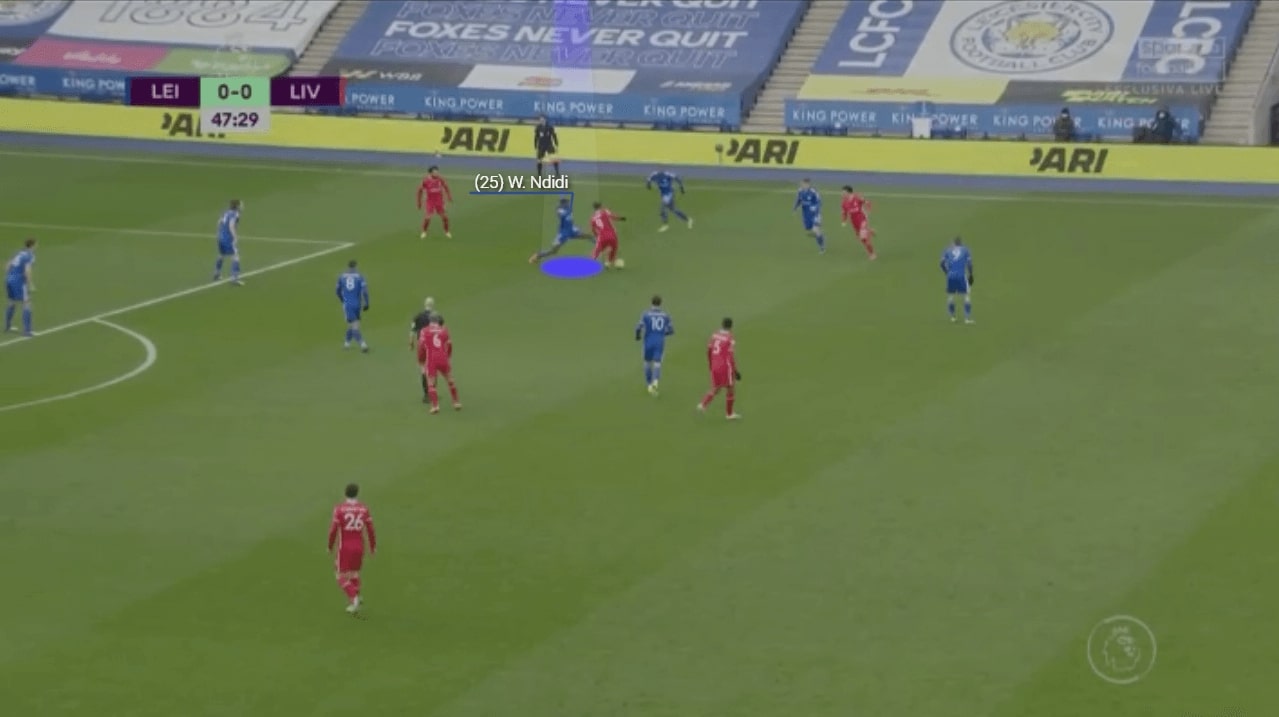 Ndidi was good at intercepting, but he was not very competent to play as a centre-back. His weakness was his habit to challenge the opposition, which he would make a big step to try stretching his foot as much as possible. The example against Liverpool shows this kind of behaviour.

Although the action itself was conducive to defend wider range and both feet of the attacker, this would also lead to several issues. When Ndidi could not read the pass or the opponent was a quick-thinker, the pass would go between legs. Also, this habit prohibits Ndidi to change his direction at short moments, if the opposition was suddenly decided to dribble, it was easy to shake him off. Leicester’s conceded goal against Burnley was also attributed to a similar defensive action.

Apart from defending cleverly as a block to protect spaces in front of the backline as we have shown in this tactical analysis, Ndidi was also vital to keep Leicester safe during the defensive transitions. Usually, he stayed deep to be a part of the rest defence with the centre-backs, having the mission to suffocate any potential counter-attacks. 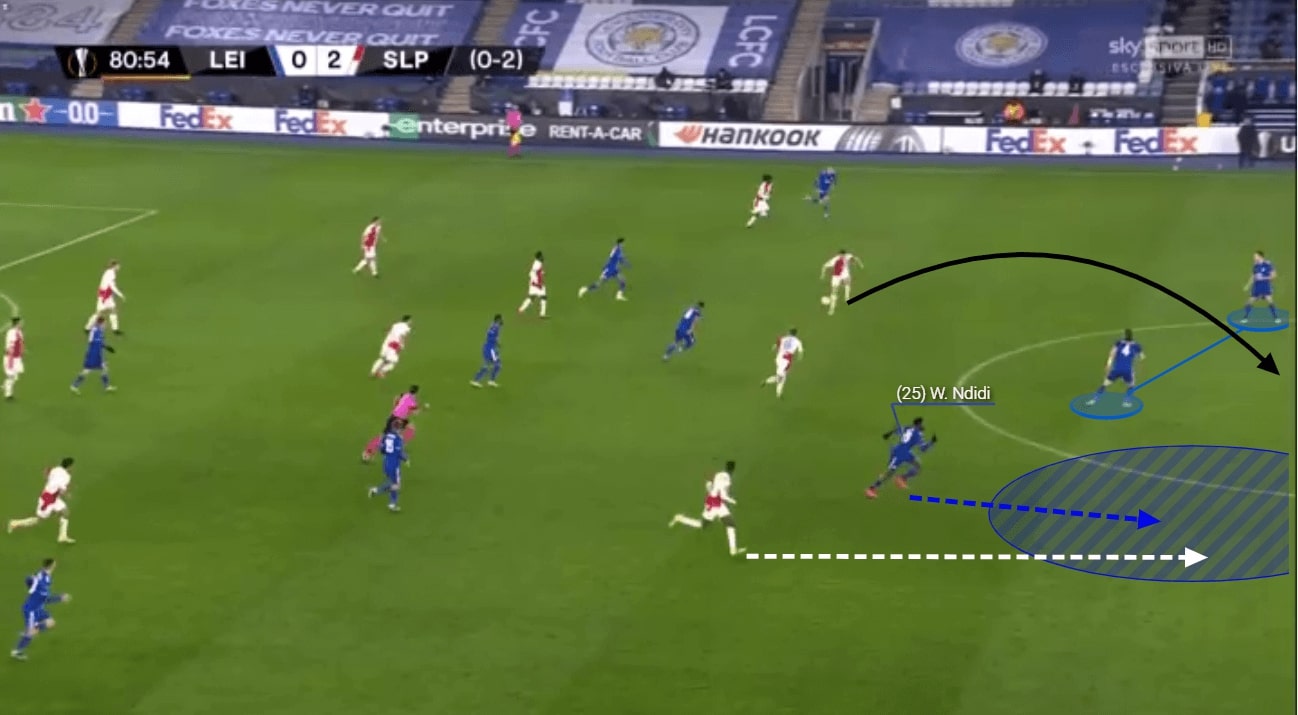 Leicester played with high full-backs and wing-backs to attack spaces outside, this inevitably resulted in spaces leaving behind during the defensive transitions. Merely rely on the centre-backs to cover those spaces was difficult as this would leave spaces inside. Therefore, the Foxes relied on the defensive recoveries of Ndidi.

On the above occasion, the opposition were able to initiate a counter-attack, the ball went behind of seven Leicester players. The left-back was up so huge spaces left behind of Söyüncü. Fortunately, they had Ndidi to cover those spaces, intercepting the ball before the opposition reached the pass. The Nigerian midfielder was always disciplined to defend spaces behind. 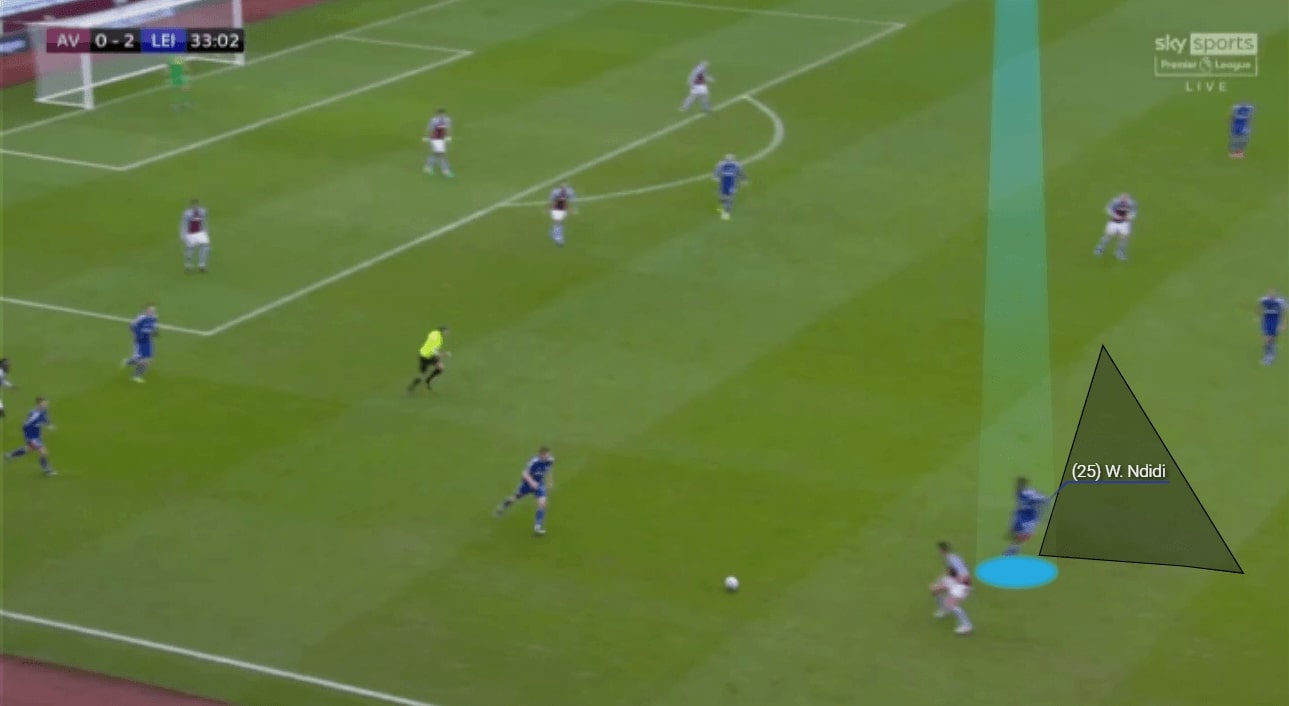 Of course, when needed to be aggressive, Ndidi could offer physicality to press an opposition as well. In this instance against Villa, Ndidi saw the vertical pass from right-back to right-winger in advance, decided to step up early to press.

When he was pressing, he was certain to come from the inside to shadow spaces at the center as much as possible (shaded in black). The receiver was unable to connect a free player at the centre, the counter-attack was dead in the wide zone, Leicester are safe.

This analysis combines the use of data and in-game scenarios to show Ndidi’s attributes. Clearly, he was one of the best defensive midfielders in England, very aggressive to try dispossessing the opposition and recover possession. With him, the defence of Leicester would be solid, the contribution of Ndidi was a fundamental that brought the Foxes success in the previous two seasons.