Mesut makes way: Why Arteta must now trust Smith-Rowe to be Arsenal’s creator

We have finally seen the Mesut Özil saga draw to a close at Arsenal, with the German playmaker making his way to Turkey and Fenerbahce this week in a low-key exit that nobody could have foreseen when he arrived with such fanfare at the Emirates from Real Madrid back in 2013. Whatever may have been the reasons for his ostracisation and exit under Mikel Arteta, it cannot be denied that Arsenal suffered greatly from a lack of creativity for large parts this season, during a time when their best playmaker was sitting at home twiddling his thumbs on Twitter. However, it is now time for all parties to move on, and the Gunners may already have found their next great hope in this regard, with youngster Emile Smith Rowe being given a central role in the team over the last few matches. It is no coincidence that Arsenal have looked much better during this time, and the 20-year-old has quickly established himself as a crucial part of this renaissance.

In this scout report, we will run the rule over Smith Rowe, and what makes him such a good fit for the current Arsenal setup, as well as how he has helped the Gunners rediscover, to a certain extent, their penchant for creative, fast and attacking football.

Emile Smith Rowe is a 20-year-old English attacking midfielder, born in Croydon, London, and having come through the Arsenal’s Hale End academy. He made his first-team debut for the Gunners in September 2018, against Vorskla Poltava in the UEFA Europa League, and also became the first player born in or after the year 2000 to score for the club, netting on his full debut against Qarabag in the same competition. He has had loan spells at RB Leipzig and Huddersfield Town, but was brought into the first-team setup by Arteta ahead of this season, where he largely featured in the Europa League, before making his mark in the Premier League as well.

As stated earlier, Smith Rowe is an attacking midfielder, most comfortable with playing as a classic number 10, much like Özil, although he has been used in roles off the flanks as well. His heatmap for this season will show this – 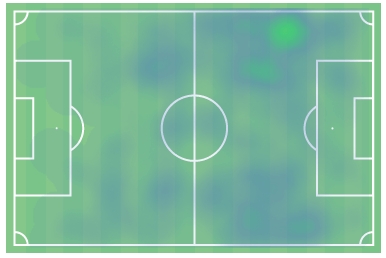 As we can see, Smith Rowe’s best work has come in the sort of areas one would expect from a number 10, even though he has had license to drift wide as well, especially to the left.

Smith Rowe is extremely proficient at moving between the lines to find space, before turning and driving at defences. He is also capable of picking out passes to runners ahead of him, and his ability to drift wide means that he often helps create overloads in those areas, or opens space up centrally for a teammate to move into. As we will see in this report, the 20-year-old’s strengths are his intelligence, vision and technique, all of which make him an excellent playmaker, well-suited to the high-intensity environment of Premier League matches.

In terms of statistics, before taking a look at his numbers, we must remember that Smith Rowe has only recently found himself starting games regularly for the Gunners. He has thus still not played a lot this season – a total of 730 minutes, with just 409 of those in the Premier League. Nevertheless, he has still had a considerable impact on the team in this limited time on the pitch. Most notable are his numbers for goals and assists. Smith Rowe has scored two goals and made a further three assists in all competitions this season. Taken on a per 90 minutes basis, this equates to 0.25 goals/90 and 0.37 assists per 90, which together gives him an excellent goal involvement rate of 0.62 per 90 minutes. This is quite outstanding, and although is down in some part to the small sample size in terms of minutes played, it still tells us that Smith Rowe is an extremely effective attacking player, capable of having a direct impact on the team’s goalscoring frequently.

His xG and xA totals for the season so far are 1.32 and 1.63 respectively, which suggests that he has broadly taken the chances that have been created for him, while his teammates have done well with those he has created for them. Looking a little deeper into the numbers, it can be gauged that Smith Rowe is likely to be more involved in creating chances rather than scoring goals. He is averaging just 0.86 shots per 90 this season, even though it seems as though he is taking his shots from good positions, with an average xG value per shot of 0.19. This, combined with the fact that he is making 3.7 touches in the penalty area per 90, suggests that the Englishman is not going to be a prolific goalscorer. However, as mentioned earlier, he is already putting together impressive numbers in terms of creativity.

The 20-year-old is already making 3.21 passes to the final third, and 2.47 passes to the penalty area per 90 this season. While these are not extremely high numbers, they reflect the fact that he does look to make dangerous passes on occasion, and he does so quite well, with a pass success rate of 84.6% and 75% respectively for these two types of passes. In fact, nearly 20% of his passes are made forward, which is an excellent ratio for a number 10, given that most of his teammates will usually be behind him. Smith Rowe is not a prolific crosser, averaging just 1.6 crosses per 90 this season, and this is partly a reflection of his central positioning as well, while he is also not a heavy dribbler, with 2.84 dribbles per 90 at a success rate of less than 44%.

His major strength, apart from providing clinical and dangerous passing in the final third on occasion, is to act as the connector between midfield and attack. It is here that his ability to find space shines through, as he will often pick up positions between the lines, allowing the Arsenal midfielders to progress the ball upfield and into dangerous areas, rather than out wide. He is also excellent at receiving the ball on the turn and accelerating past opponents, as well as at playing quick one-twos to burst into space – all traits that Arsenal fans will recognize from players such as Santi Cazorla, Tomáš Rosický and Özil in their prime. In addition to this, he is also defensively engaged, which is a core trait for players to be able to work in Arteta’s system. Smith Rowe has averaged 2.2 interceptions and 3.8 recoveries per 90 this season, which shows that he is willing and able to get involved in the defensive work that Arteta demands from all his players.

Having taken a look at the 20-year-old’s statistics from this season, we will now look at some examples from matches to bring out his traits.

As we have stated earlier, oe of Smith Rowe’s biggest strengths is his movement off the ball. The Arsenal academy graduate is almost constantly on the move, looking to find space either centrally or on the flanks where he can receive the ball under relatively little pressure, and have the time to turn and pick a pass, or, if pressured, play quick wall passes to then spin and run into space. He also takes on defenders himself in 1v1 duels on occasion, although this is relatively less frequent, and Smith Rowe usually prefers to let his passing do the talking. 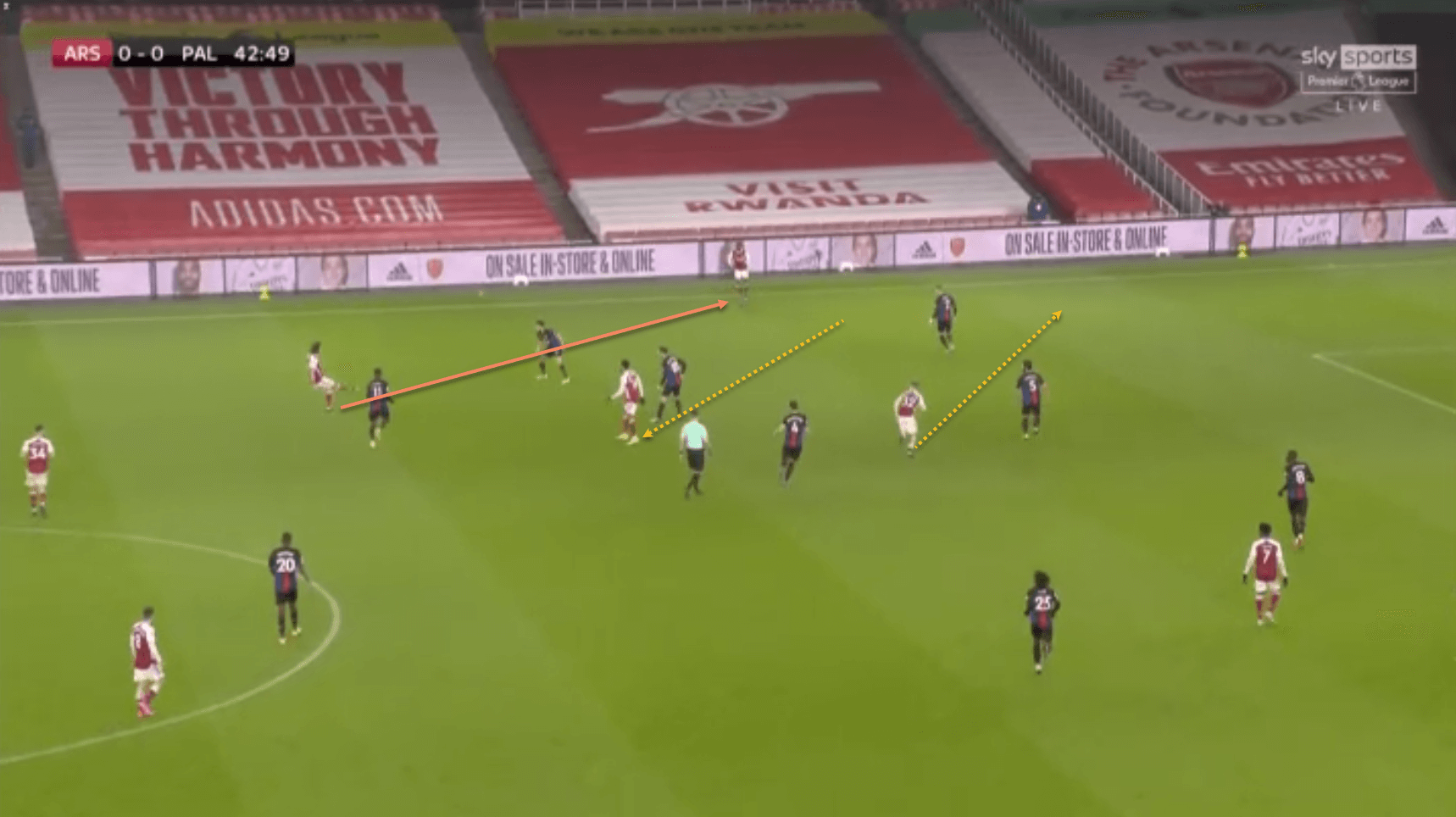 Here is an example of this sort of movement. David Luiz plays the pass out to Ainsley Maitland-Niles on the left, and that is the trigger for Smith Rowe to run into space out wide. The 20-year-old recognizes that with Pierre-Emerick Aubameyang also having come infield from his left-wing berth, that is where the space is. 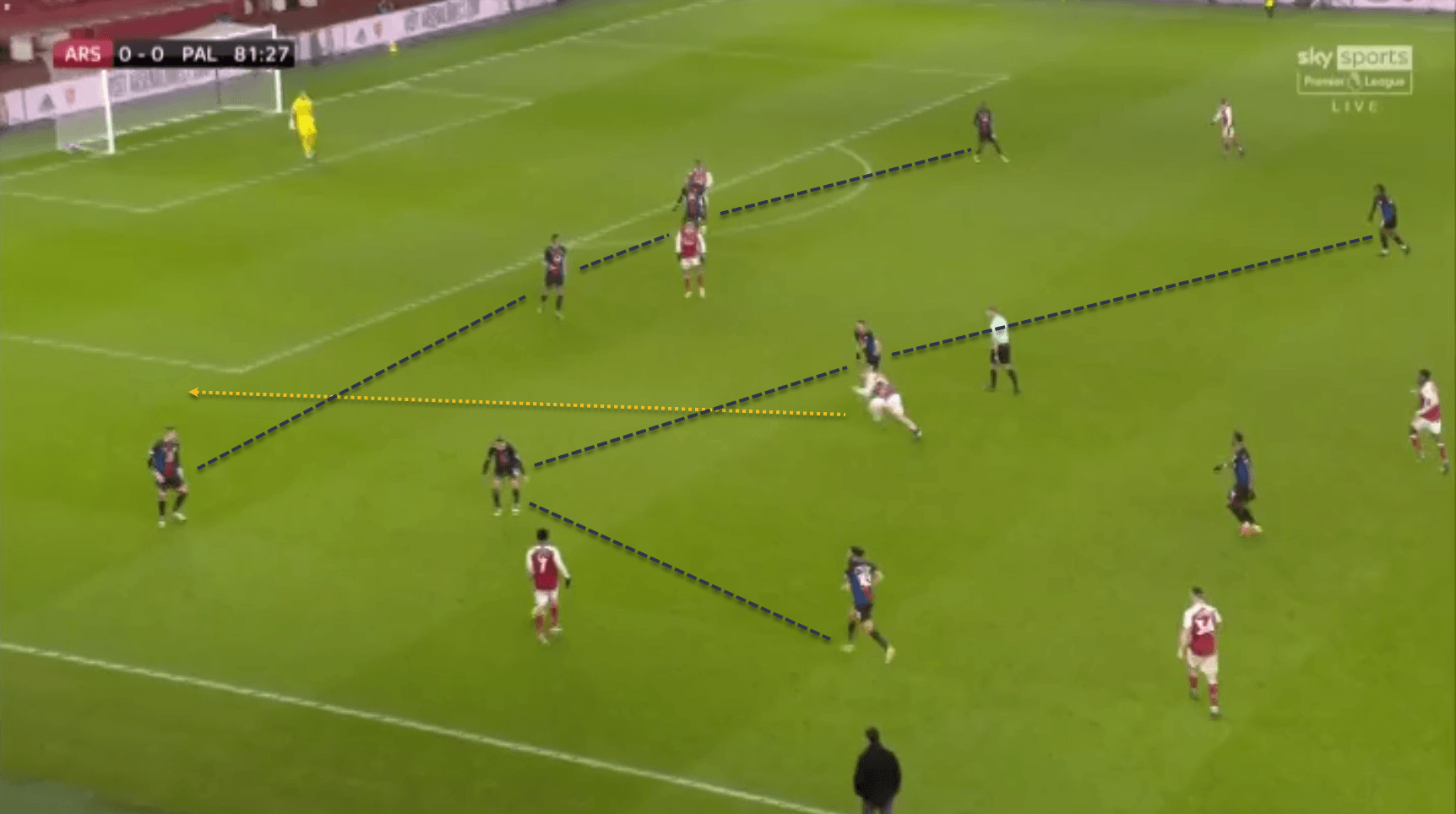 Here, he makes a run from deep to break through the Crystal Palace lines, with Bukayo Saka having a relatively easy pass to make to find him as he accelerates. Once again, he sees where the space has opened up due to the positioning of the Palace players as well as his teammates, and makes the run to fill it. 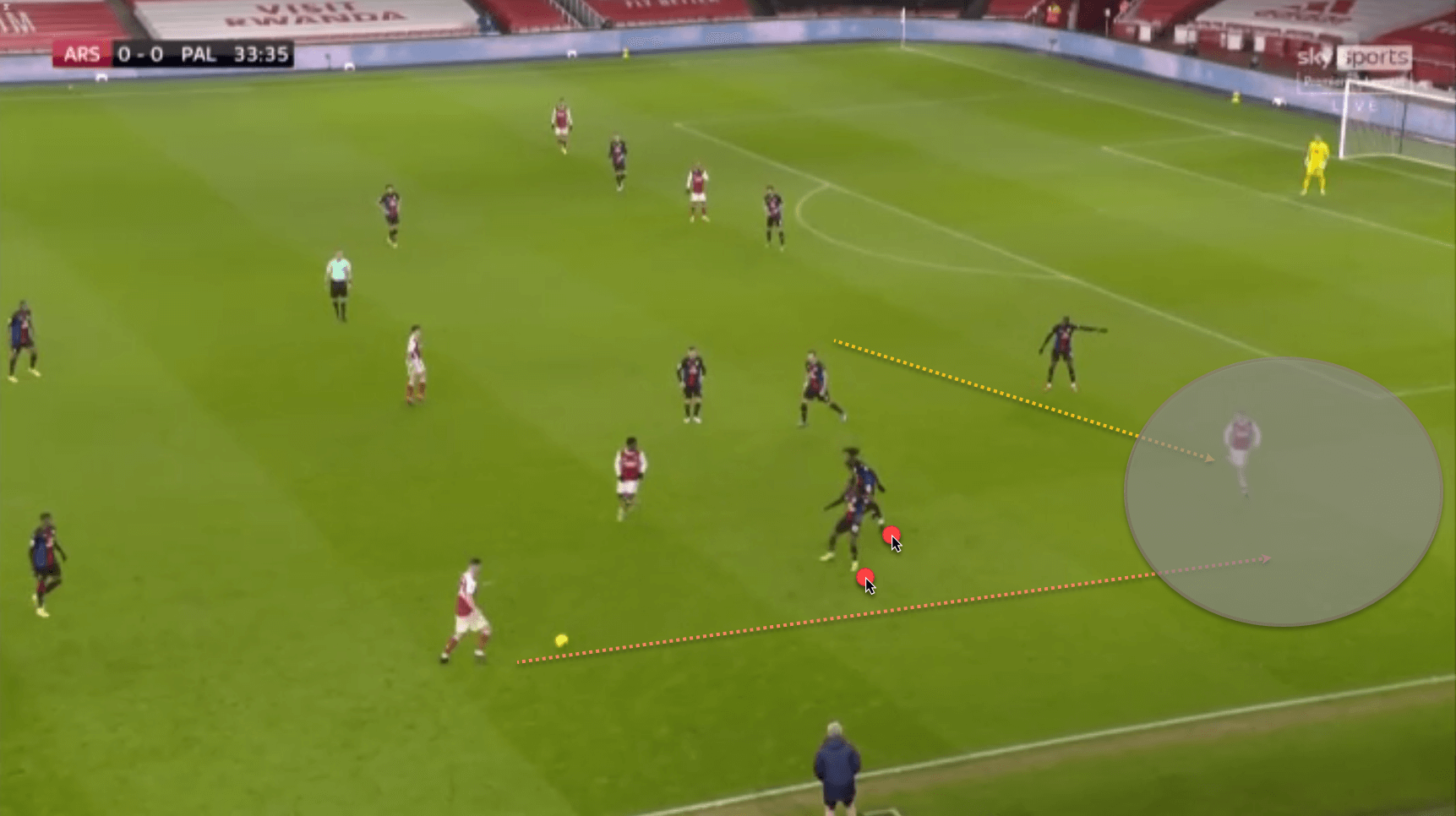 Another example from the same match, where, once again, Smith Rowe makes a run from central areas into wider positions due to the space being available there. Both of Palace’s players on their left have been drawn to Granit Xhaka on the ball, and that leaves room for the 20-year-old to move into. Notice how Cheikhou Kouyate, in the Palace backline, is furiously gesturing for one of his teammates to pick up Smith Rowe, but to no avail.

This trait is one of the biggest pieces in his armoury, and it has played a big part in facilitating some of the quick, rapid attacking that we have seen from Arsenal over the last few weeks. 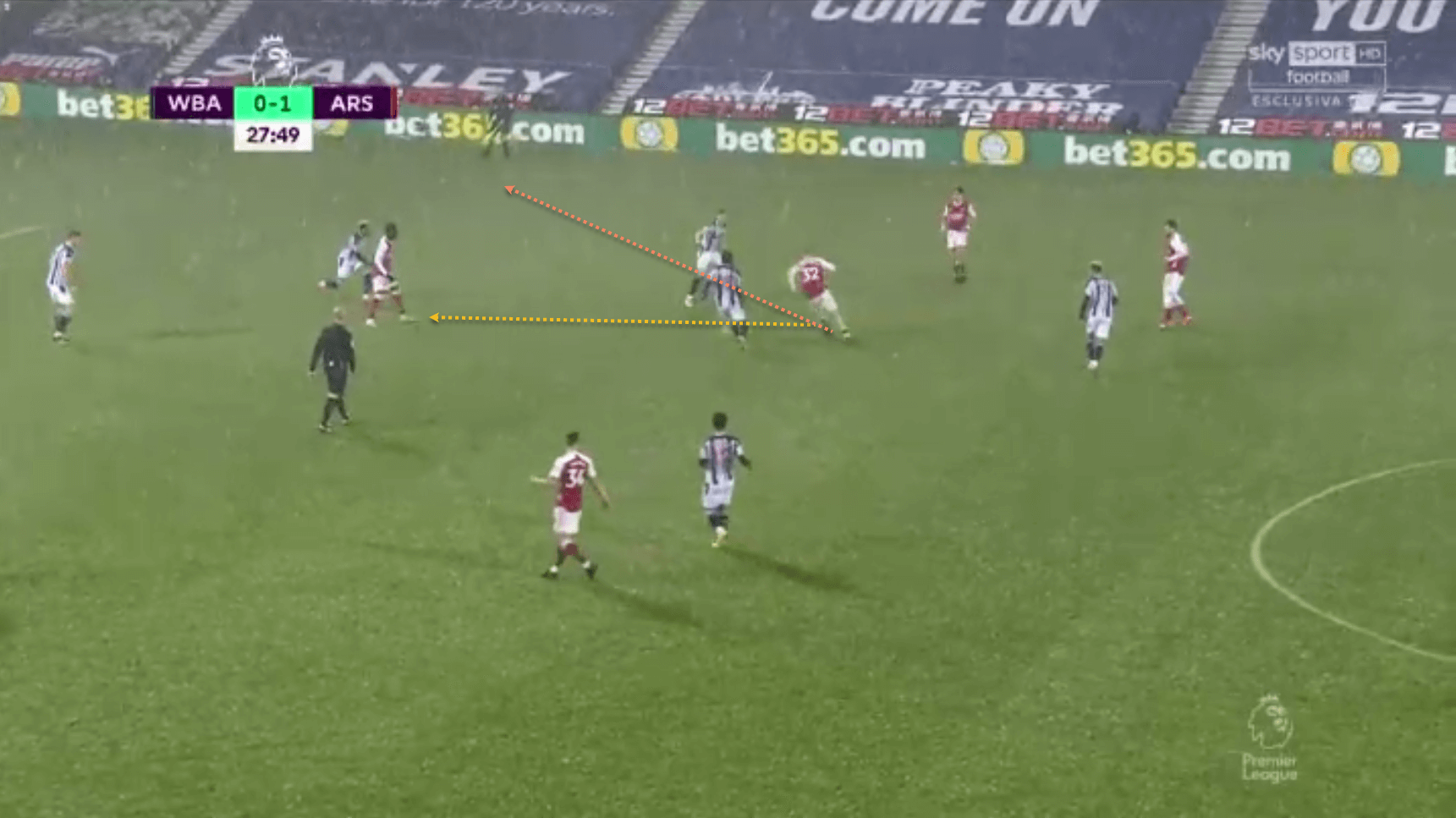 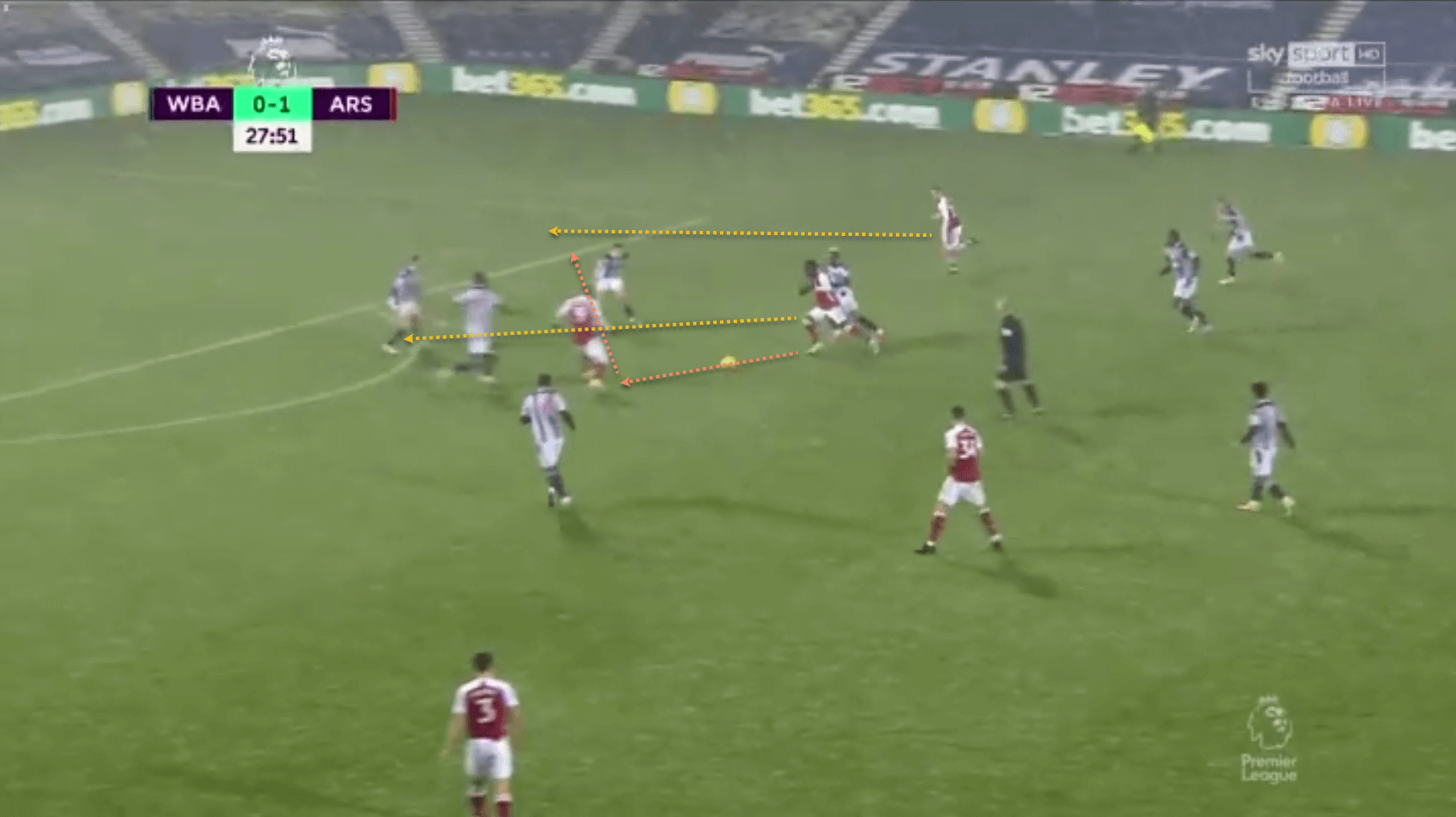 …Saka plays a quick ball to Alexandre Lacazette and runs beyond him into the box. The French striker sees Smith Rowe’s unmarked run into space, and plays the ball to him… 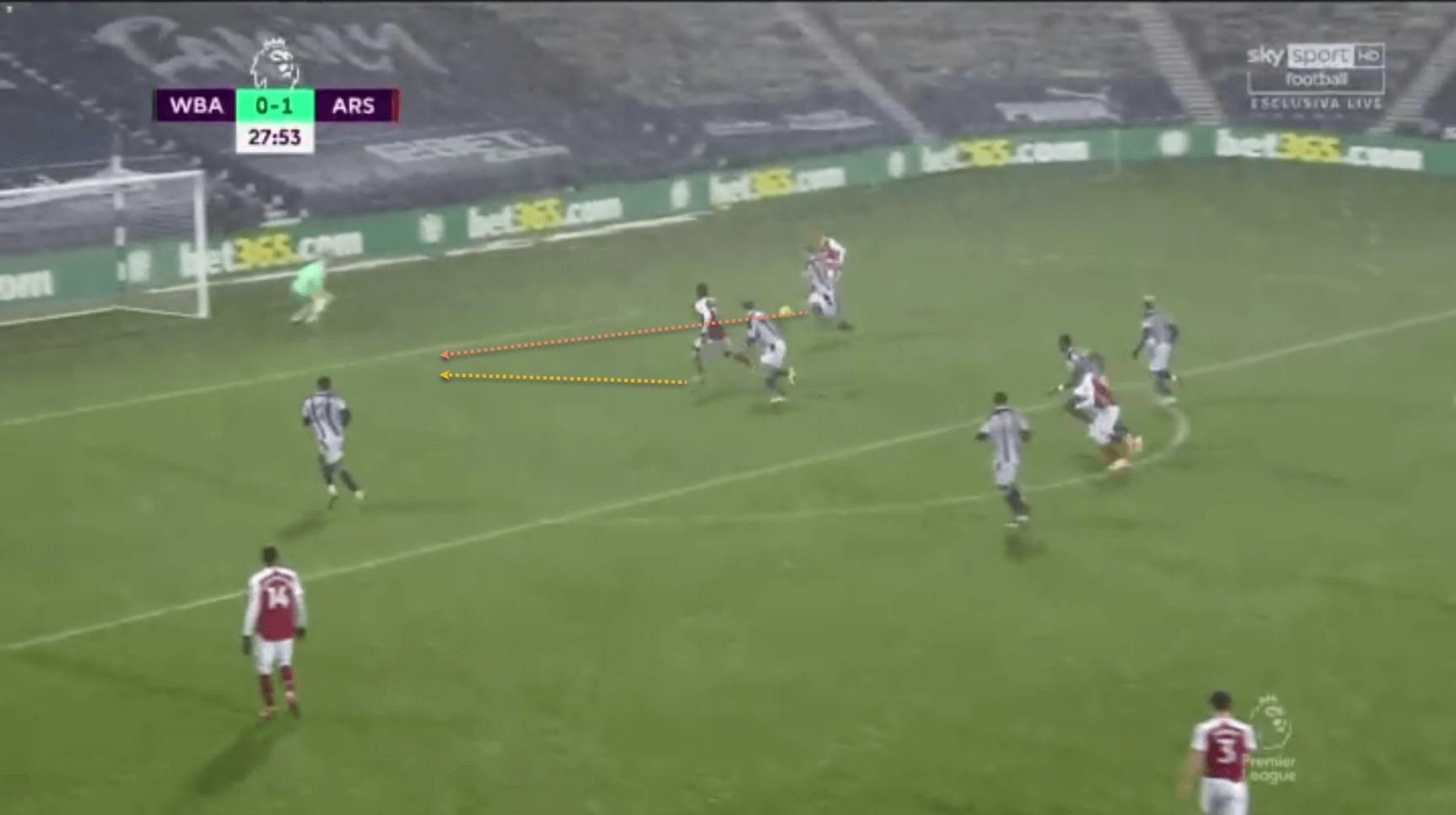 …leaving the 20-year-old with an easy pass to set up Saka for a tap-in.

This is just one example of his ability to play these rapid passes and accelerate into space. 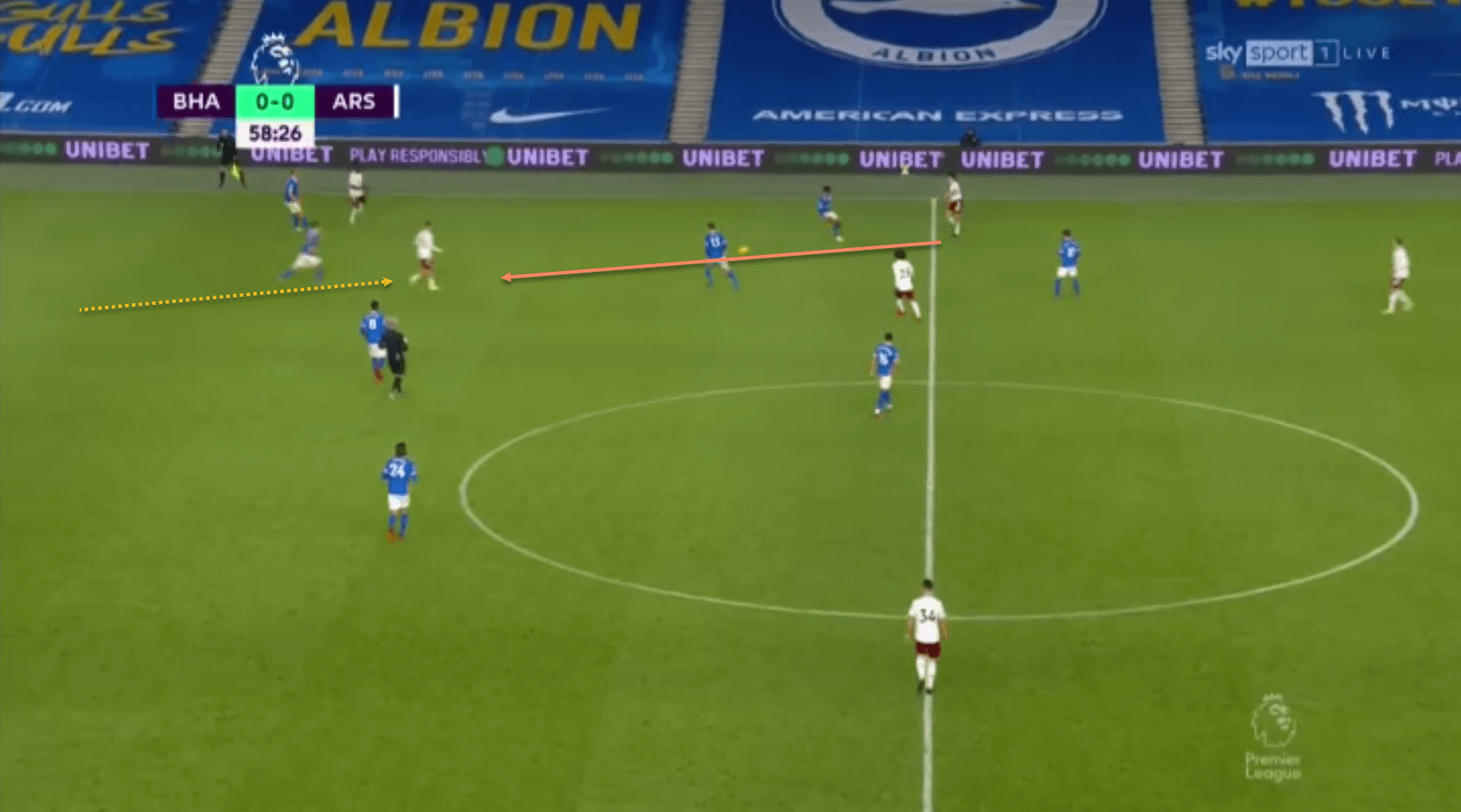 Here, Smith Rowe drops deep from a forward position to pick up the pass from Hector Bellerin, drawing a Brighton defender with him… 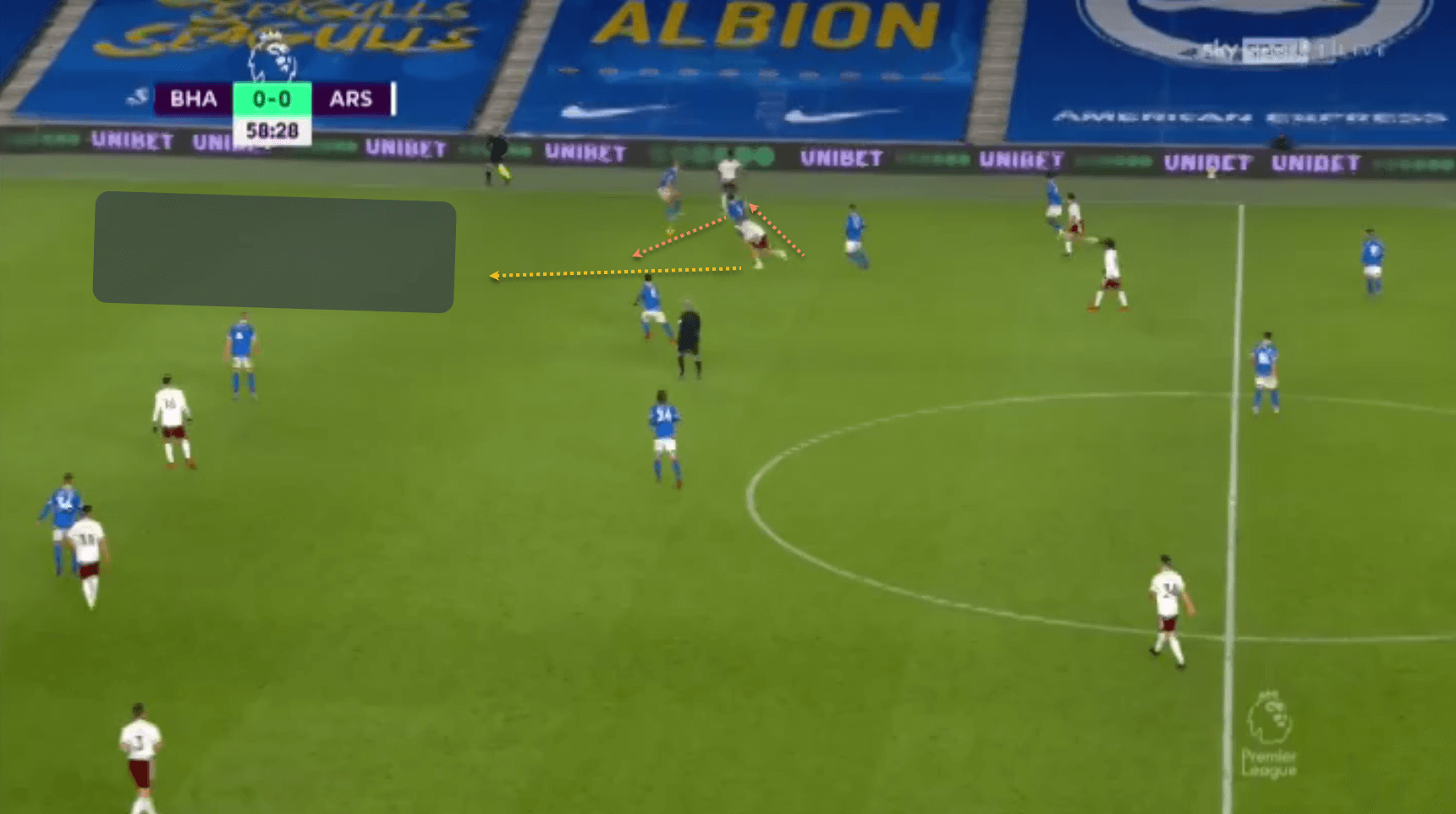 …before playing a quick one-two with Saka and accelerating into the space that has been opened up as a result.

The 20-year-old’s excellent ability to see where space is opening up and then make the appropriate run, is a very simple but extremely important trait to have if you want your team to be able to play quickly, and this has been a big reason for Arsenal’s increased fluency in recent weeks.

Allied to his movement off the ball is his ability to find space in between the lines. You will often invariably see Smith Rowe get on the ball with a lot of space around him, and no opposition players in position to close him down quickly, giving him the time to turn and figure out his next move. His movement, combined with his intelligence, allows him to get into those sort of positions. 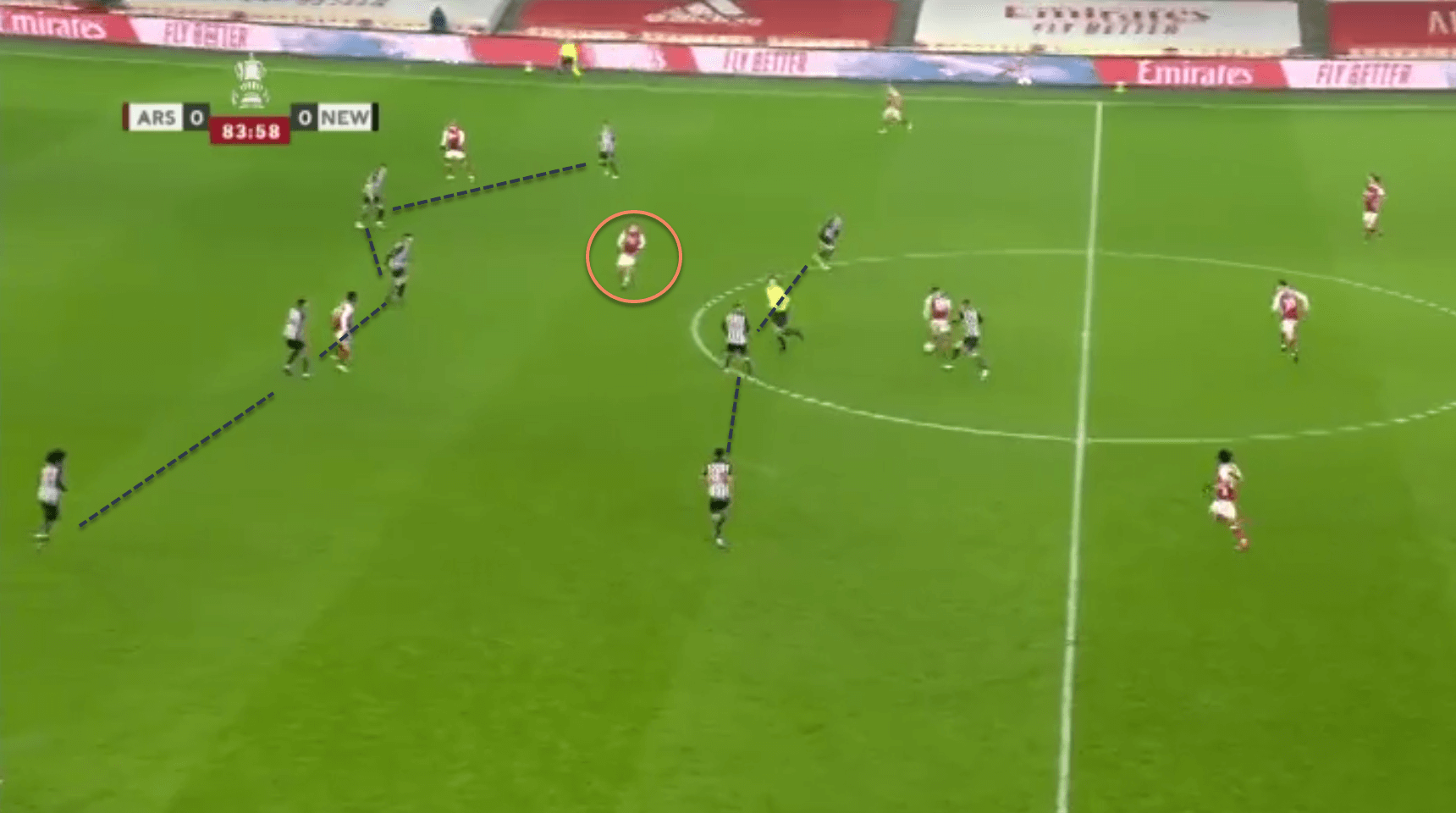 Smith Rowe has been able to easily find space in between the Newcastle United lines here, and is thus easily picked out in a dangerous position. 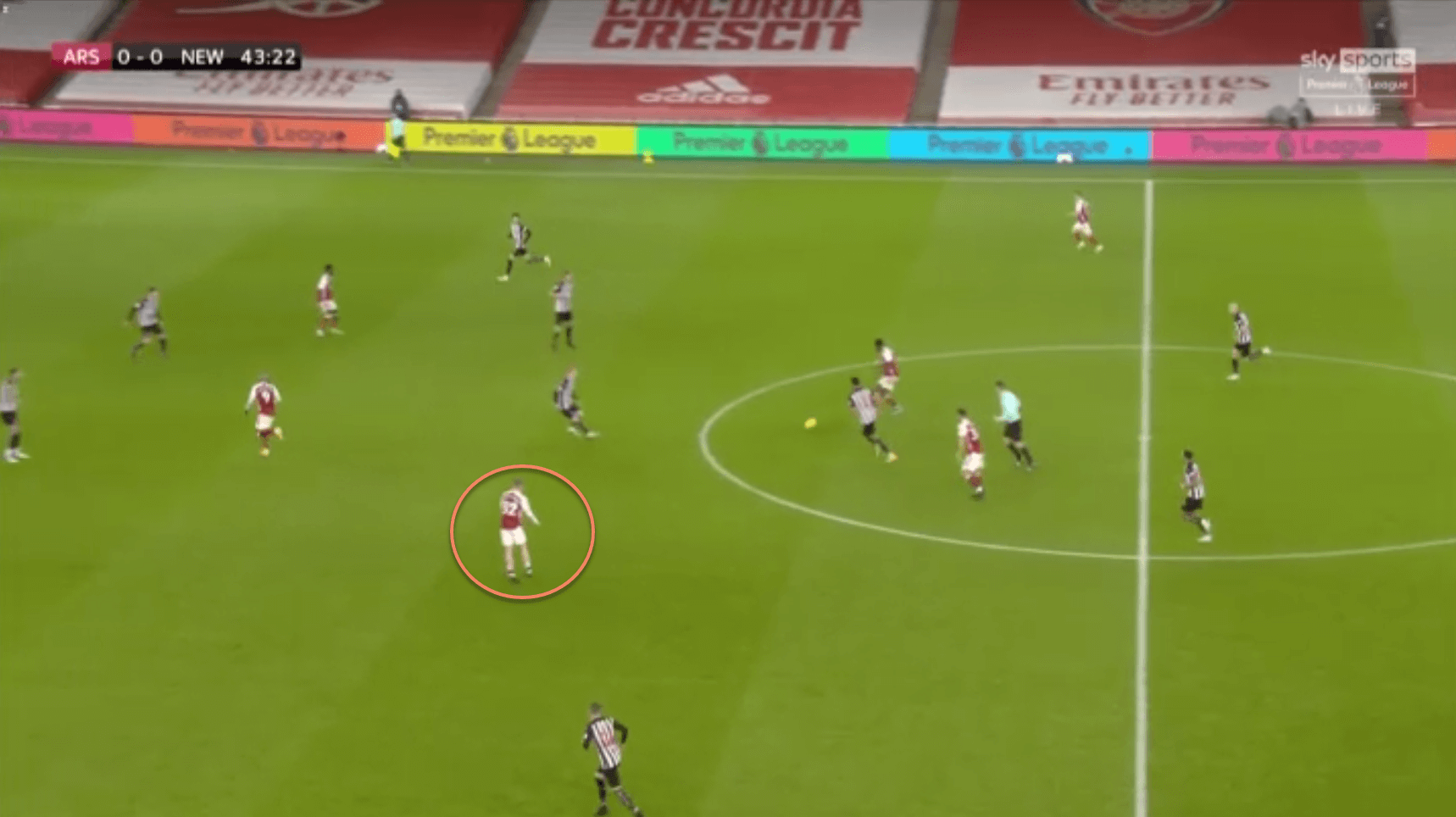 Another example, this time from the league game against the same opponents, where Smith Rowe has once again been found by a teammate in acres of space with nobody in position to challenge him as he receives the ball.

It takes a lot of courage to constantly pop up in these sort of positions and demand the ball, as well as confidence in one’s own ability. Smith Rowe possesses both of these attributes in spades, and they will be crucial to his growth at Arsenal, as the team already looks quite reliant on him for their creativity.

The Özil era may finally have drawn to an end at the Emirates Stadium, but Arsenal fans can rest assured in the fact that a natural successor is already present in the squad. Smith Rowe’s movement and ability to pick up dangerous positions are reminiscent of the German playmaker at his pomp, and he has already begun to show why Arsenal do not need to worry too much about finding a direct replacement for the World Cup winner – he’s already here, and he’s ready to make a mark in the Premier League.