Fridolina Rolfö has just joined Barcelona Women prior to participating with the national Swedish team in the Olympic Games and this move will be beneficial for both Rolfö and for the Spanish team.

We are talking about a player who has been consistent in form for numerous seasons after she played at Tölö, Jitex and Linköping before joining Bayern Munich for two seasons – and lastly playing for Wolfsburg and helping them reach the final of the UEFA Women’s Champions League.

Rolfö will be competing for a regular spot with Lieke Martens while knowing that playing for such a big team can only make her be a more complete player and allow her to achieve her goals.

In this tactical analysis scout report, we will explore the traits that attracted Barcelona to her profile and what she can add to the Spanish team in the near future and how she can be useful to the team’s tactics especially when facing other big teams in UWCL, like Chelsea, Lyon, Bayern and Paris Saint Germain for instance.

Rolfö naturally plays as a left-winger and masters her position perfectly as she uses both feet even though her left foot is the stronger one.

At her previous teams, Rolfö has often participated in the defensive phase by helping the left-back when the team is out of possession. Her defensive role was usually to press on the opposing right-back and help in marking the opposing right-wingers, and she was often useful in this regard given that her physical abilities allow her to be strong in duels. In fact, winning an average of 63.4% of defensive duels is certainly telling of how much Rolfö is important from a defensive perspective, a side that is often overlooked about the Swedish player.

When in possession, Rolfö is required to move without the ball on the left-wing, ask for the ball and retreat to take it if she’s being marked and then advance while relying on her excellent pace and dribbling skills.

Her average for successful dribbles is 58.8% per match as this is one of her best characteristics. In the final third, Rolfö often crosses to her teammates inside the box, advances with the ball towards the box and shoots by herself if she finds some free space or moves inside the box without the ball and waits for pass/cross from her teammates by acting like a striker. You can see in this heat map how she moves mainly on the left-wing while also retreating at times and advancing towards the box at other times. 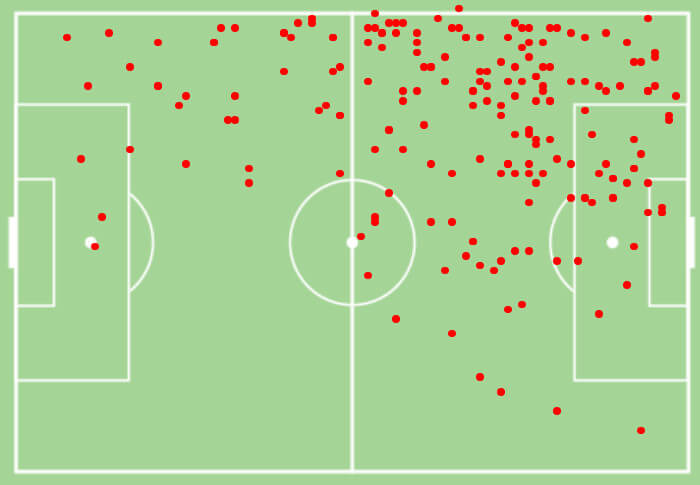 Rolfö’s attacking skills are undeniable and distinguish her from other wingers since not only she is able to put on excellent performances but she is also a hard-working player whose efforts can always be seen on the pitch.

In reality, being consistent in form especially at the high level is not an easy task when playing in a position that requires a lot of physical effort and speed in every game. So by succeeding in being consistent in almost every match, Rolfö’s hard work pays off and that can be noticeable. Moreover, it is clear that she is a player who doesn’t find problems in adapting to her attacking teammates as she is an intelligent player who knows and predicts the striker’s movements. It is clear she also knows when to wait for midfielders to join the attack in order to pass to one of them.

Rolfö’s crosses have often created goals since they are usually executed with accuracy and with a clear intention in mind – not just for the sake of it. Being able to direct her crosses in the way she wanted and with great precision allows her to be more focused on serving strikers, right-wingers who join the box and even midfielders. This enables Rolfö to be a source of goals and she has increased the number of assists in each season she played.

In the following example, Rolfö saw who was the unmarked player who could get on the end of the cross and delivered quickly – resulting in a goal – and this illustrates the point that we mentioned above. 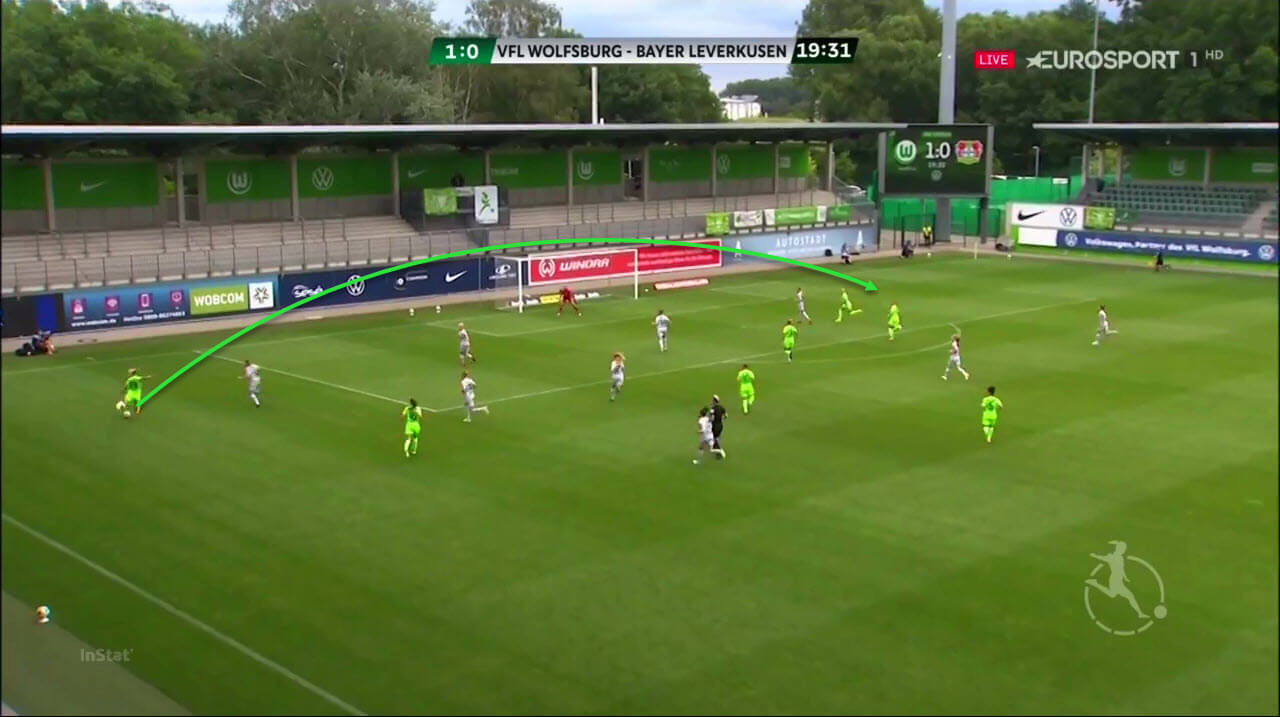 In addition to crossing and using long passes towards the far post, the near post and to midfielders who come from behind, Rolfö also excels at providing key passes – especially when she penetrates near or inside the box. By moving inside the penalty area, she attracts more defenders around her and allows the striker to be less marked, and as soon as she notices that, she directly gives through passes towards that player.

This plan is often used by Rolfö and it works for her in most times since defenders can’t adopt a more effective counter-strategy to stop such movements except committing fouls or leaving Rolfö just with her marker, which will cause problems as well since they know that Rolfö can dribble past the defender and find herself in front of the goal. 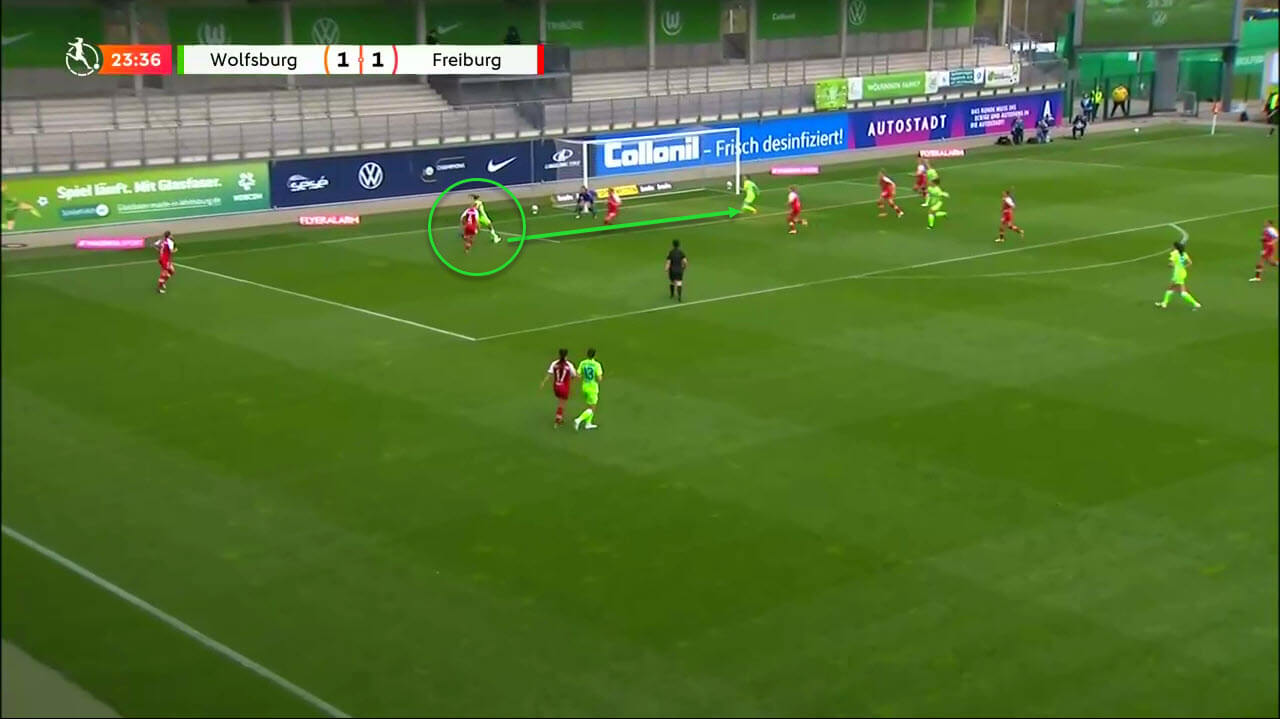 Another way for Rolfö to execute her crosses successfully is to keep following the movements of the right-winger to see if she escapes marking especially when the striker is being marked. At that point, Rolfö provides key crosses to wingers as well – and this could occur a lot at Barcelona since the regular right winger Caroline Hansen is also a smart player who knows how to escape from marking and be clinical when getting close to the box. 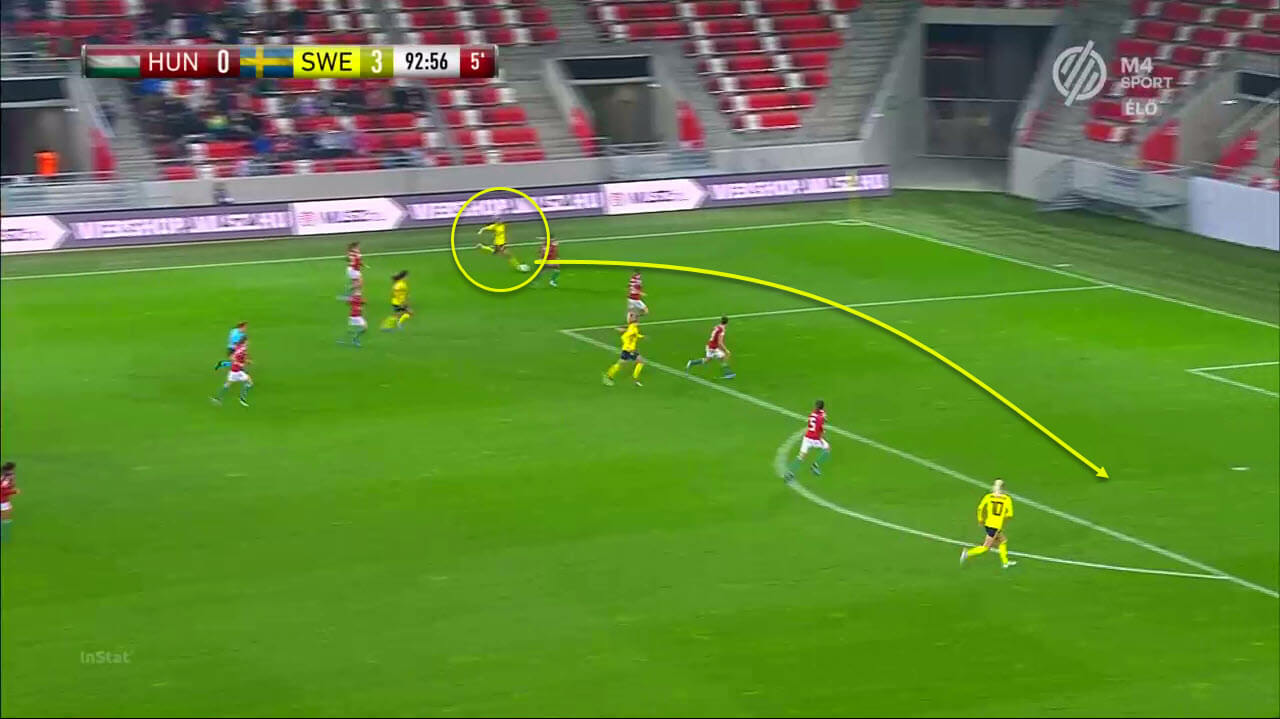 As well as dribbling and playmaking, Rolfö can also be fundamental in certain games by scoring goals and threatening the opponents’ goal. She has already scored a lot of goals for the teams she played at yet she could still improve in this regard – since her shots do not always include the necessary amount of power and precision even though she does not lack the shooting abilities.

In reality, Rolfö’s only error when shooting is her decision making at times – and that’s what makes her shots lack the clinical touch needed. Nevertheless, this is quite understandable given that Rolfö is often marked and that she only makes such errors after being concentrated on dribbling past opponents – which does not give her enough time to think about the way of shooting. Moreover, what is reassuring is that she scores with ease whenever she gets the ball while being unmarked.

That’s exactly what happened in the following example in which Rolfö advanced towards the box and acted like a striker while she waited for her teammate’s cross. 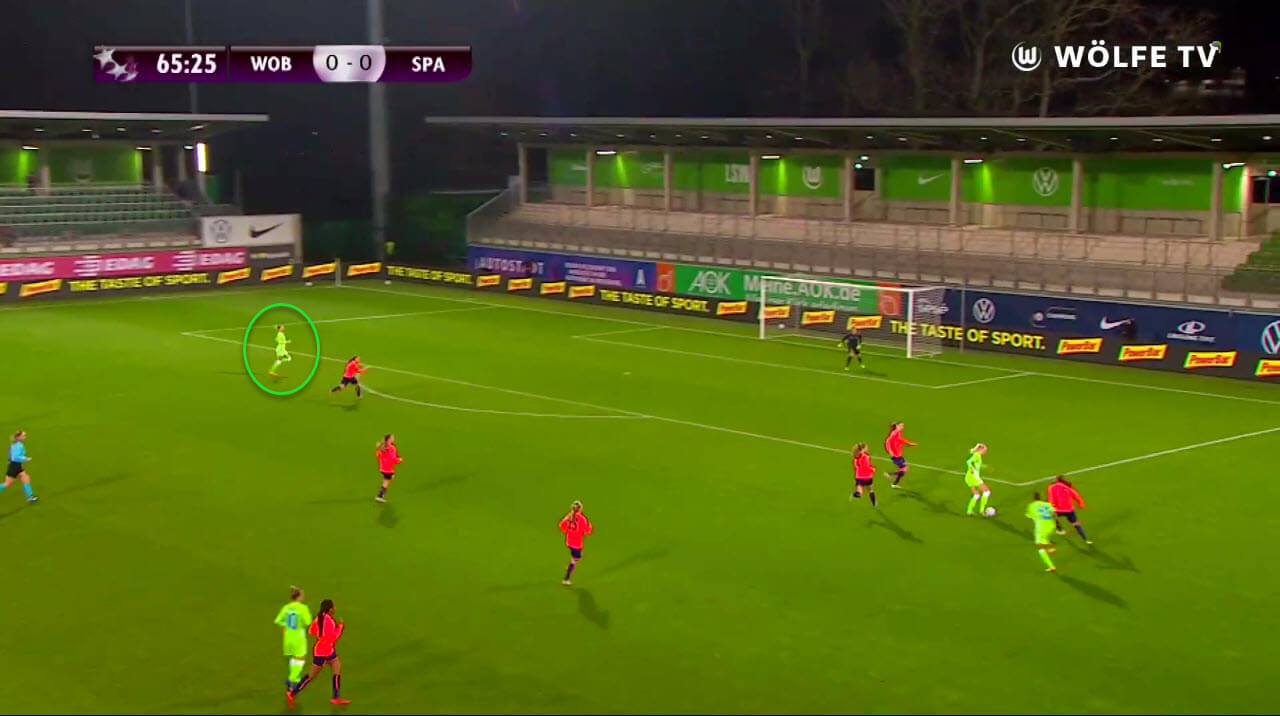 What is excellent in this action is Rolfö’s decision to move towards the near post after she was waiting near the far post, in order to escape from her marker and meet the ball before it gets intercepted. In addition, the way with which she kicked the ball was quick and accurate as it did not allow the goalkeeper to think about reacting to it. 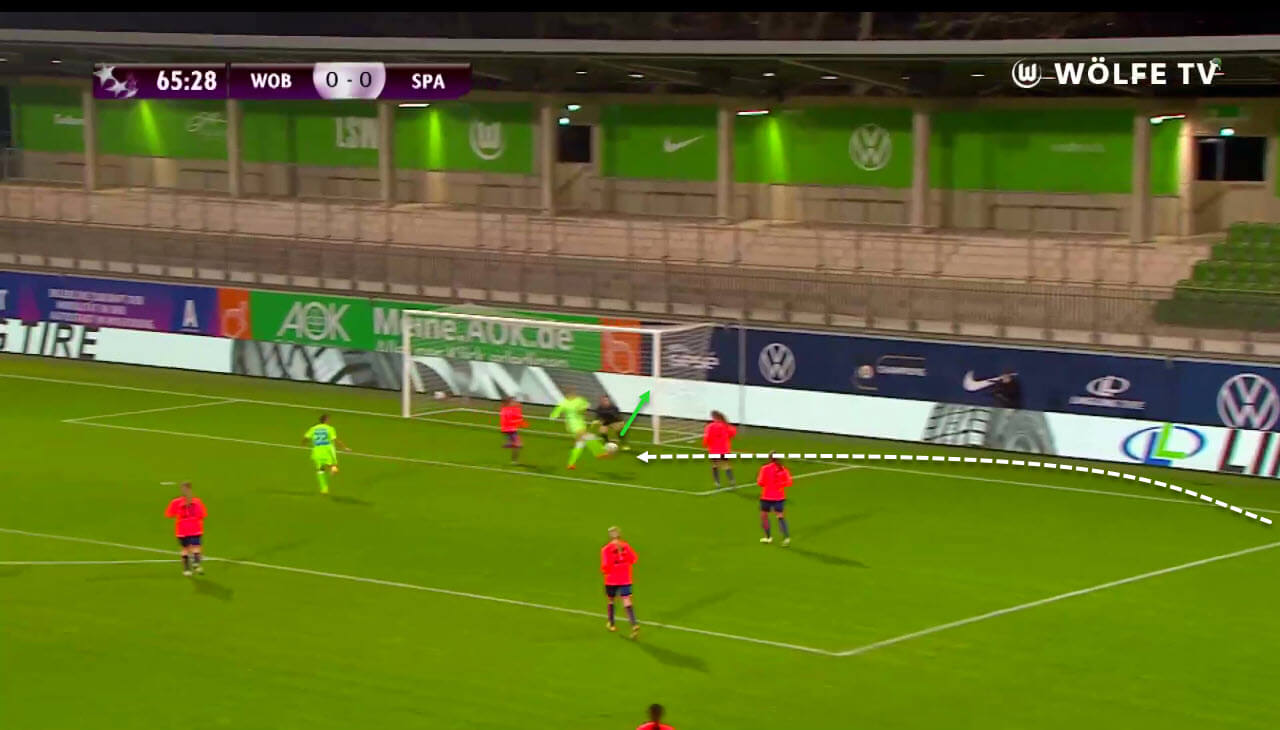 Apart from being excellent in exploiting crosses, Rolfö is quite good at headers as well since she scored many goals in this way. But more importantly, she has some impressive shooting from distance abilities especially when shooting while running.

However, she does not use this skill so often and this can be due to playing most of the time on the wing and not being able to penetrate centrally. With the Swedish national team, she had more freedom with her movement and we saw her scoring goals while advancing from midfield and not from the wing, which resulted in goals like the one scored against Thailand in 2019’s Women’s FIFA World Cup (after dribbling past her opponent). 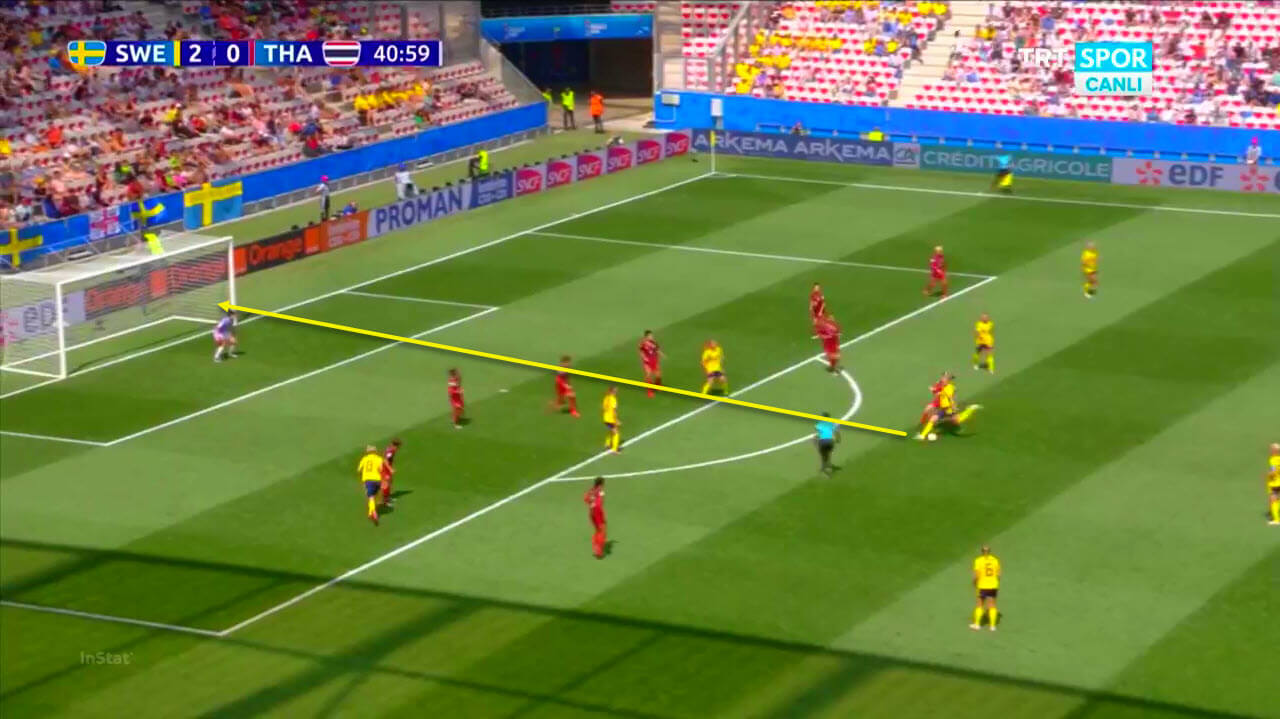 At Barcelona, the staff can work with Rolfö on improving her decisions to make her an even more clinical player for the team given that she does not lack technical skills.

And at the same time, getting to play alongside experienced players like Hansen and Jennifer Hermoso can only allow her to focus more on those small details and enhance what is left to improve in order to prove that she became a complete player.

Rolfö is going to be a very useful signing for Barcelona as the Swedish winger has all that is needed to succeed at the Primera División and in UEFA Women’s Champions League – like she did with Wolfsburg and Bayern Munich previously. However, securing a regular spot will be a bit more difficult this time since she will have to compete continuously with Lieke Martens for that spot.