Olympics 2020: Why Sweden were unable to take gold against Canada – tactical analysis

Tokyo’s Olympic football tournament ended on August 6, 2021 following a final match between Canada and Sweden which was only decided through penalties, to the advantage of the Canadians. Canada Women, therefore, won the gold deservedly while Sweden Women won the silver medal, which is an excellent result for them as well.

Yet, the Swedish felt the frustration of not being able to win the whole thing since they had all that was needed to finish their mission in a good fashion. The emphasis will be put on Sweden’s errors from an attacking perspective to know what went wrong for them in this match especially when knowing that they scored first but failed to keep or support their advantage in the second-half, which allowed Canada to score the equalising goal, get back in the match and win on penalties.

In this tactical analysis article, we will study how both teams approached the game and why did Sweden fail to keep their advantage and to be continuously dangerous upfront while analysing both teams’ in-game tactics and the notable individual player performances.

On the other hand, Canada started the match using the 4-3-1-2 formation which gives them the right balance in defence and in attack. Stephanie Labbé was the starting goalkeeper, Ashley Lawrence, Vanessa Gilles, Kadeisha Buchanan and Allysha Chapman in defence, Desiree Scott, Quinn and Chelsea’s Jessie Fleming as central midfielders while Christine Sinclair played as an advanced playmaker just behind the two strikers Nichelle Prince and Janine Beckie. 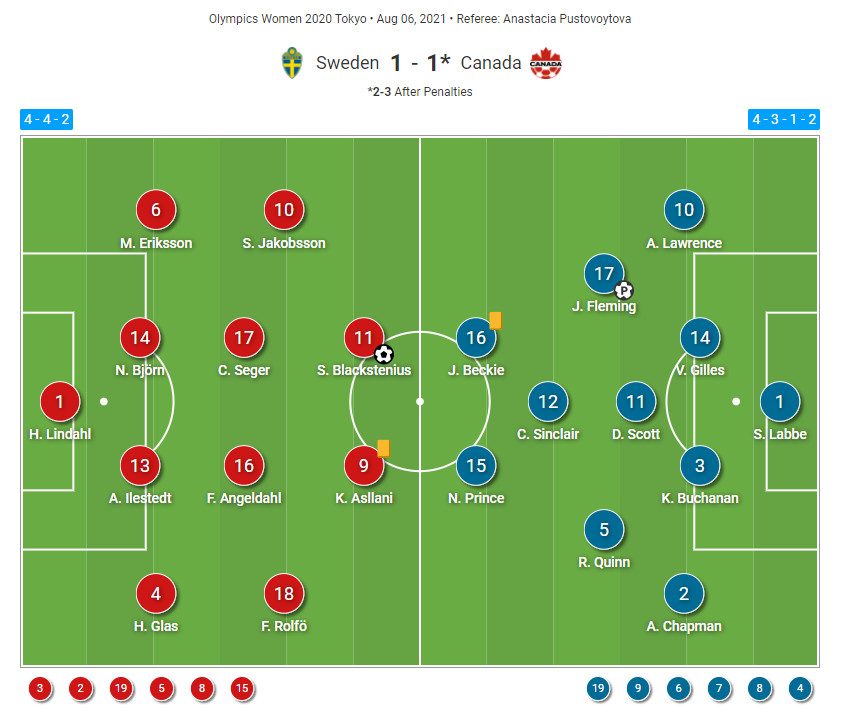 Sweden’s attacking approach and its issues

Sweden started this game with a different approach than in the previous ones and especially with distinct player positions. They attacked with two strikers with Asllani being no longer a playmaker but on the same line with Blackstenius. Moreover, Gerhardsson preferred to switch his wingers’ roles and move Rolfö to the right-wing and Jakobsson to the left-wing. This was mostly done to get away from Bev Priestman’s possible marking instructions and surprise them with a distinct attacking plan and off the ball movements.

Nevertheless, this change was a bit risky and it was one of the reasons why Sweden struggled to score more than one goal in the match. In fact, Sweden reached the goal continuously and made 31 shots (only five on target) and despite the changes in positions, Sweden’s most dangerous chances were created from the right-wing, just like in the previous Olympics’ matches. With Glas, Rolfö and Asllani being constantly on the wing, Canada’s players were not able to cope with the quickness and agility of these players and therefore we saw many crosses and through balls towards Blackstenius and Jakobsson, even before the goal action.

You can see in this action how Asllani had the time and space to cross while Blackstenius was trying to escape from marking inside the box. 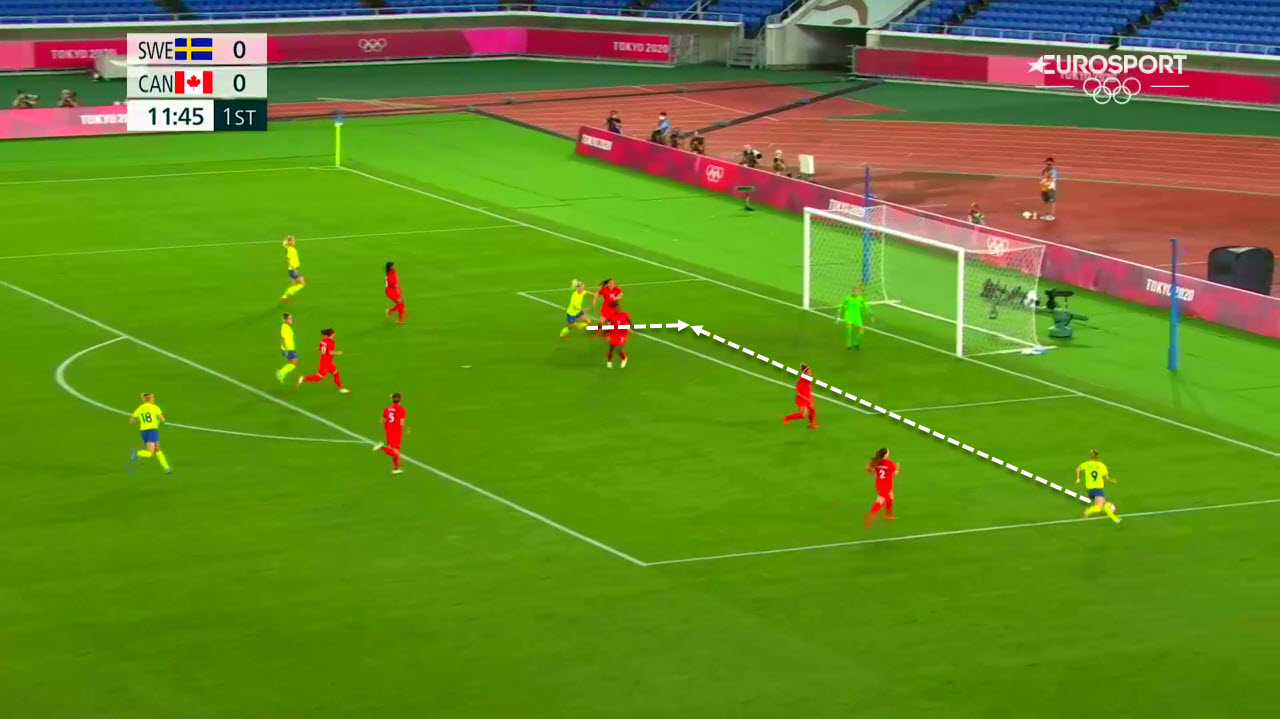 Almost the same situation occurred several times and Canada’s players were a bit passive in marking and did not defend with the necessary determination on many occasions, such as in the following one in which Rolfö provided a key pass to Jakobsson who were able to cross the ball to Eriksson who was coming from behind. No sliding tackle or any attempt to intercept such passes was made from Canada’s players, and this gave Sweden more freedom upfront. 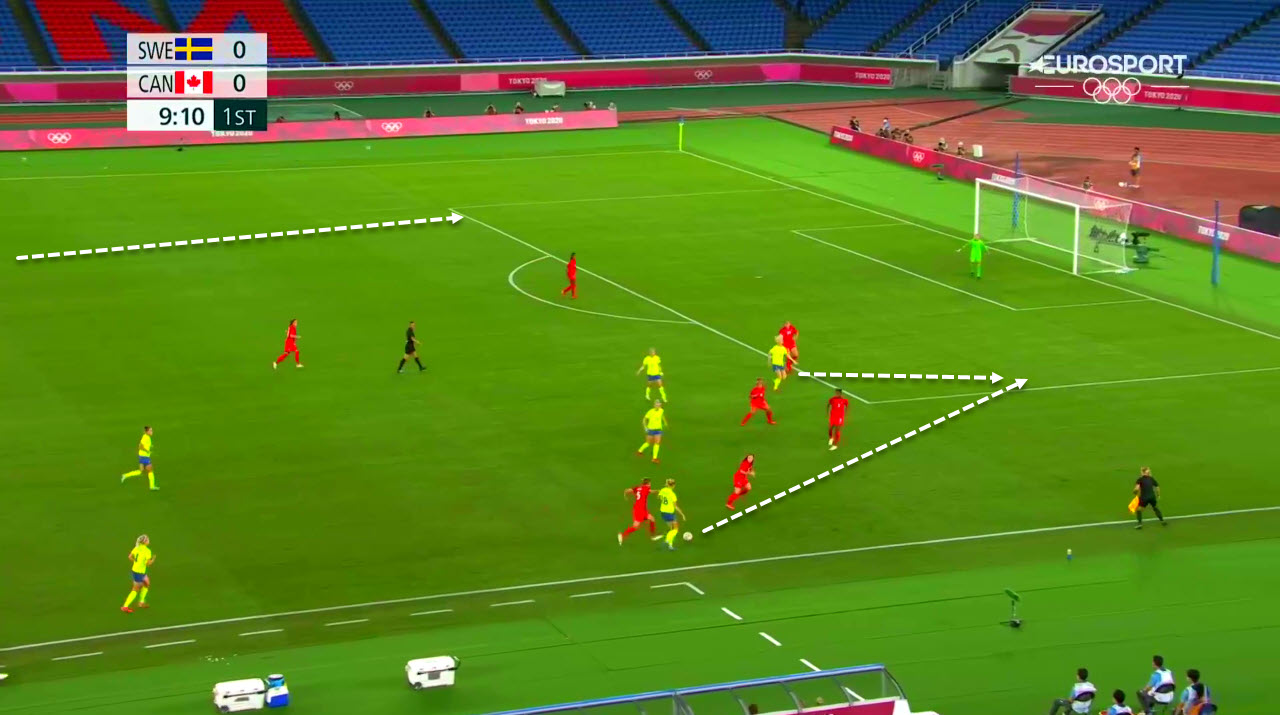 Sweden continued in attacking in the second-half with the same intensity even though Canada had their share of possession too but without threatening Sweden’s goal so often. The other problem with Sweden’s attacks was Rolfö’s inability to shoot with her right foot since she was playing on the right-wing. This has created numerous missed chances/shots from Barcelona’s player who tried her best to mix between accuracy and power, yet she wasn’t able to be as accurate as needed only when she shot with the right foot. This occasion highlights how important this point was when Rolfö missed this chance inside the box at this crucial time of the match. 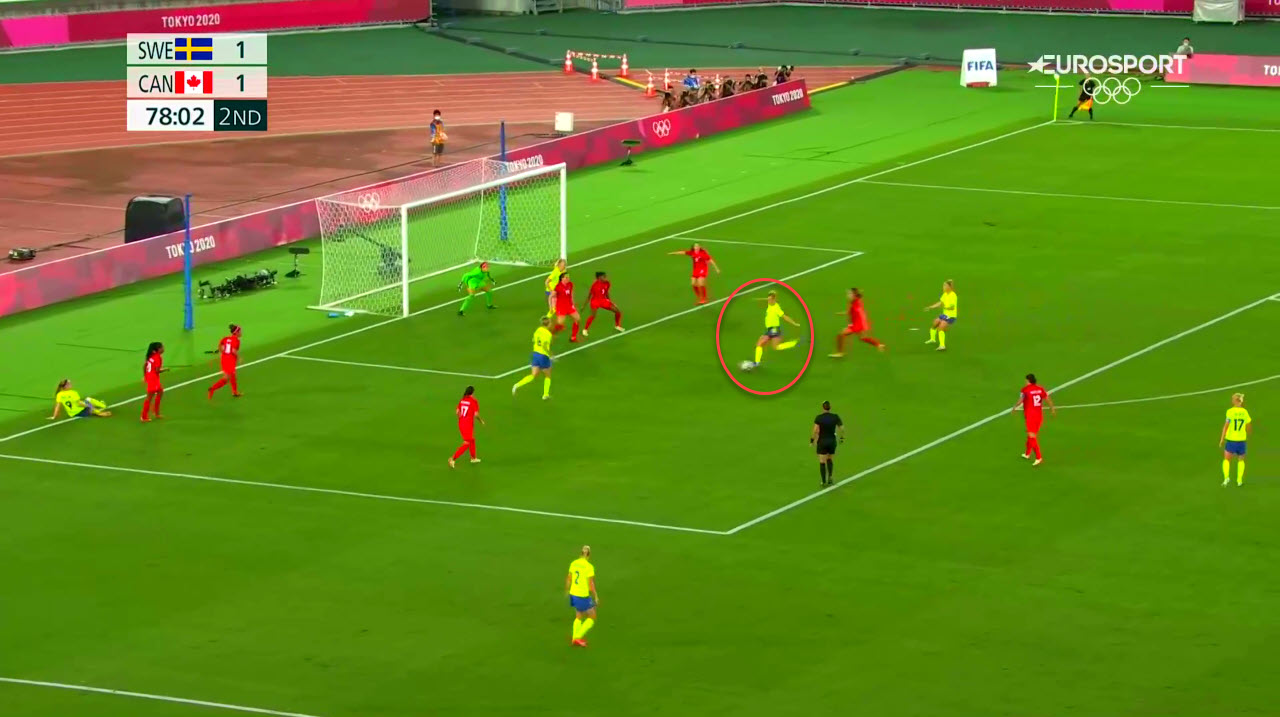 Sweden’s only goal of the game came from the right-wing too and thanks to an excellent effort from Asllani who once again proved her qualities in playmaking by running on the wing and giving a through pass to Blackstenius at the adequate time, enabling the latter to score a goal without losing so much effort. What made the action easier was once again Canada’s poor marking and lack of aggressivity in duels. 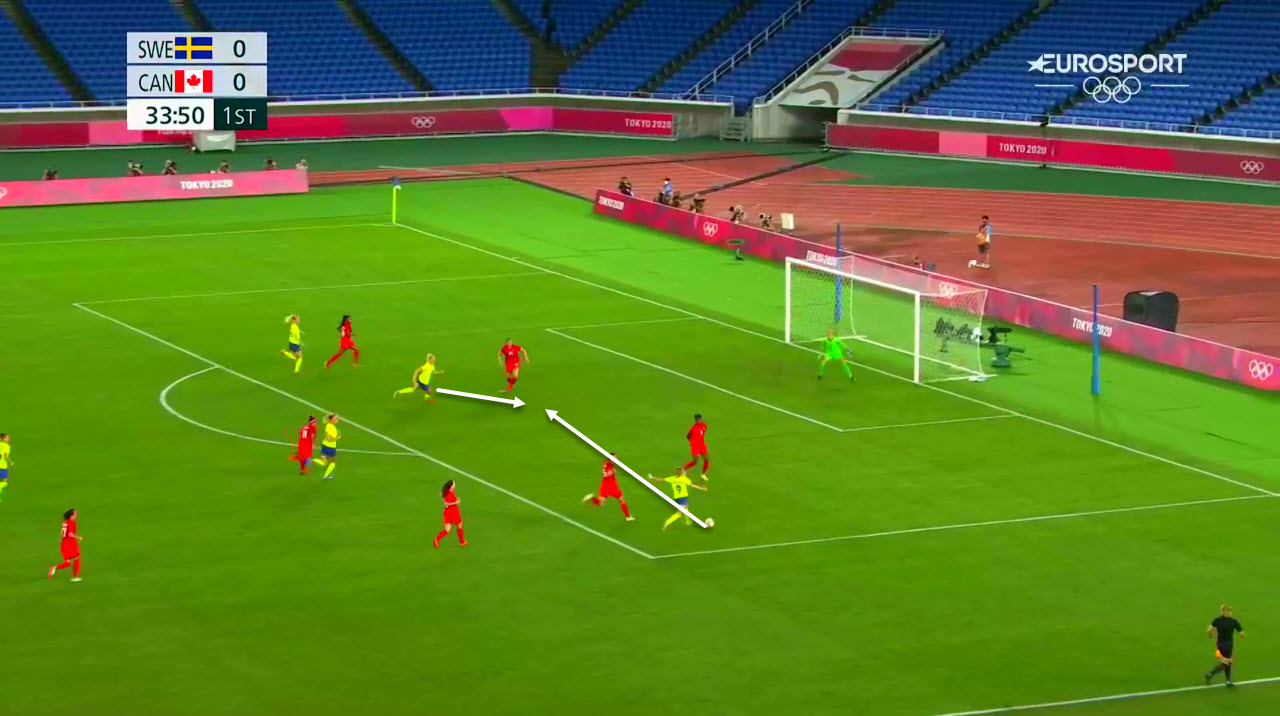 Although Canada’s defensive performance was not a perfect one, one cannot neglect that the effort the players did to get back in the game after being behind for most of the match in a final requires a lot of concentration, personality, and determination. And this is why Canada’s players deserve to be praised for not giving up and waiting until they scored the equalising goal. Moreover, it was also fundamental to not lose their concentration after that goal and remain balanced in order to oblige Sweden to go to penalties or exploit one of their defensive mistakes to score a second goal.

Nevertheless, what lacked Canada in this match was a proper striker who can disturb defences and exploit half chances with finishing skills. This final touch in itself was what Canada needed on many occasions but didn’t have. Players like Sinclair, Fleming and Quinn tried to provide key passes regularly but then these passes were either intercepted or unexploited in the right manner. What made this more apparent is the lack of chemistry between Beckie and Prince which was clear in more than one occasion.

For instance, in this example, Prince received a pass on the left-wing, decided to cross the ball to Beckie but the latter did not understand her teammate’s intention, was surprised b the cross and didn’t move towards the ball, otherwise, this would have been a clear goalscoring chance. 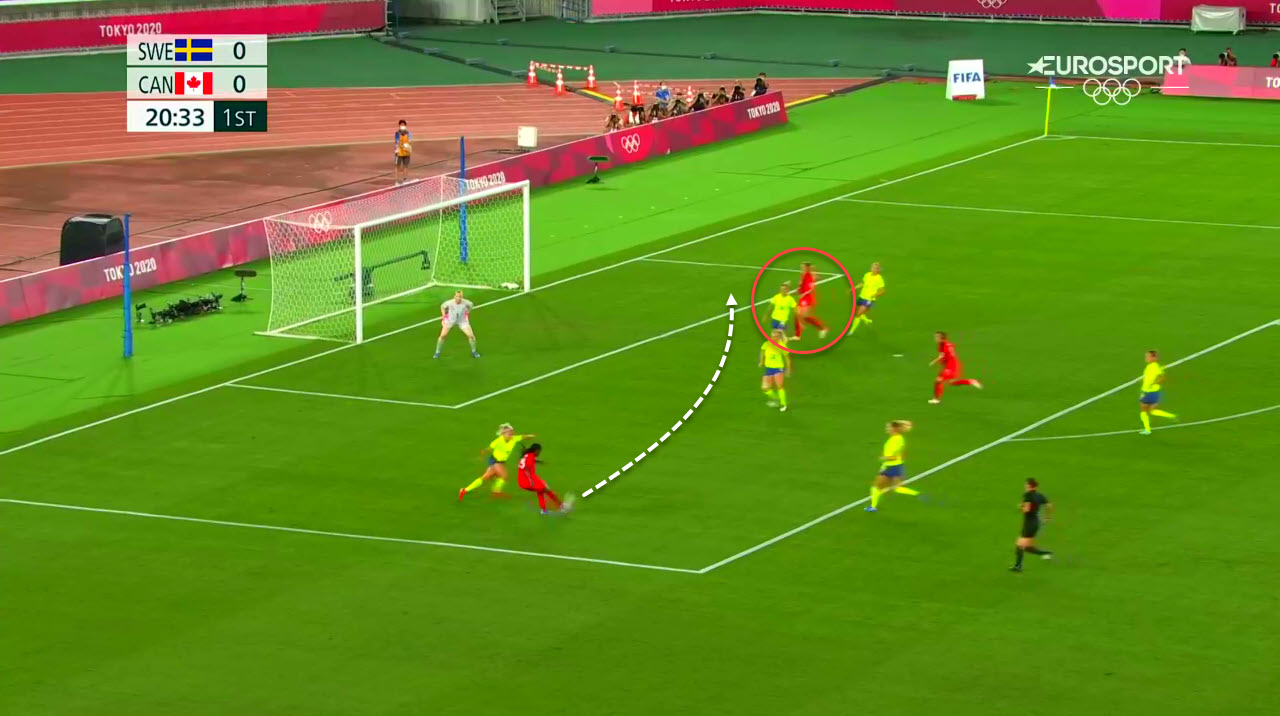 Canada then relied mainly on exploiting set-pieces and trying to exploit Sweden’s defensive mistakes which weren’t many. And the same applies for set-pieces since Sweden were excellent in aerial duels. Canada however were intelligent in winning a penalty thanks to Sinclair’s great control and protection of the ball in a delicate area, which allowed her team to equalise and then win the whole tournament.

And just like Sweden, Canada had some clear goalscoring chances that were missed and which could have finished the match before resorting to extra time. Laurence had the chance of the tournament at the 68th minute when Lindahl went out of her goal and gave the ball away to Deanne Rose who gave it to Laurence. But unfortunately for the Canadians, the latter’s shot wasn’t as powerful as needed in order to surprise Sweden’s defender. 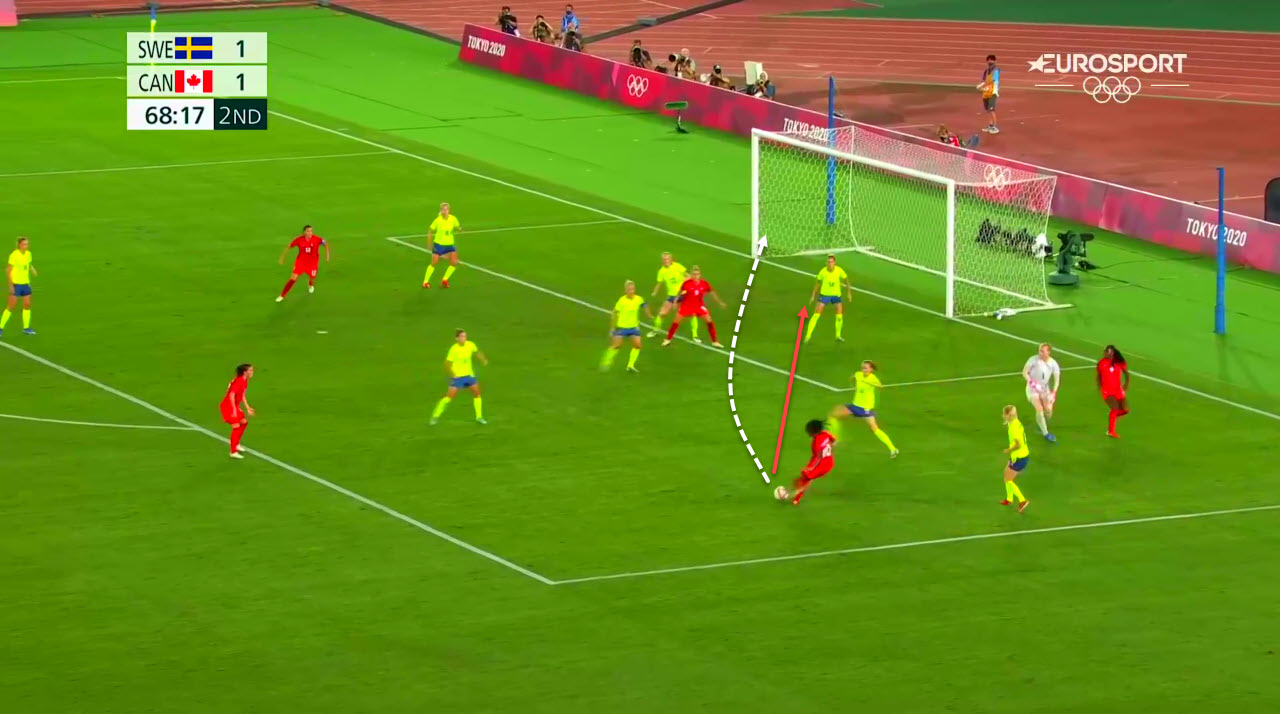 Canada deserve to win this competition for their consistency throughout the tournament and especially for resisting against a tough team like Sweden. Getting back in such a match and having the right personality to win in penalties was not a simple mission for the Canadians and therefore, they fully deserve the gold medal even though they didn’t necessarily play the best football when compared with other teams.

At the same time, Sweden should be proud of their performances in this tournament as they showed that they became one of the best teams in the world and that they will soon be lifting trophies, perhaps even in the upcoming EURO 2022.