How can Geyse Ferreira become a more complete striker at Barcelona Femení and the Brazilian national team? – scout report

Geyse da Silva Ferreira is a Brazilian international player who started her career in Brazil and played for different teams in her local country including CESMAC, União Desportiva, Centro Olímpico and Corinthians. But prior to these experiences, Geyse played futsal and has surely learned a lot by practising this game, knowing that playing this sport isn’t as easy as it seems. And more importantly, most football players who started by playing futsal have always found it easier to deal with tight spaces, dribble better than other footballers and have a great technique with the ball.

Geyse benefited from this futsal impact by developing her skills and she started seeing the fruit of her efforts later after she moved to Europe in order to play for Madrid CFF and Benfica. Her performances at Madrid CFF attracted the attention of Barcelona who offered her a contract in 2022. Geyse has already started to play with her new club this season and she also made a positive impact on the attacking performances of her team as soon as she was given the opportunity to showcase her abilities.

In this tactical analysis scout report, the focus will fully be centred around Geyse’s characteristics, her positions and roles on the pitch, how she can succeed at Barcelona and fit their tactics, her goalscoring abilities and what she needs to improve in order to become a more accomplished attacking player.

Geyse is mainly a striker who has been used in this position most of the time, according to different formations like Barcelona’s standard 4-4-3 formation. At the same time, Jonatan Giráldez has been experimenting with some other positions with Geyse and he used her as a left and right winger. She proved to be very useful in both positions as well since she has no issues in terms of dribbling, pace and playing in larger parts of the pitch instead of just the box, unlike other strikers.

This variety of skills and ability to adapt to different attacking roles allows Geyse to succeed at such a big club which includes some of the best attacking players already. But in order to remain impactful at Barcelona, Geyse will need to put on consistent performances in spite of the position she holds on the pitch, providing her head coach with a plethora of solutions and sort of obliging him to play her regularly thanks to her potential.

With the Brazilian national team, Geyse has already played as a right winger in a 4-4-2 formation and in a 4-2-3-1 formation, a striker in the 4-2-3-1 formation as well and a left winger in Madrid CFF’s 4-2-3-1. It is true that Geyse shined with Madrid CFF for quite a long period, but now the time has come for her to excel at an even higher standard and get the opportunity to play the UEFA Women’s Champions League and challenge some tougher teams that she didn’t get the chance to meet before joining Barcelona. Geyse has already faced PSG, and Bayern Munich this season and will surely be challenging other big teams very soon. In fact, she scored her first goal against PSG in a friendly game that witnessed her first start with Barcelona, and this gives us an idea of the level of concentration, determination and confidence of the player.

What highlights the player’s determination and excellent mentality even further is the way in which she was able to score that goal. Geyse scored this goal thanks mainly to her excellent continuous pressing on PSG’s defender which eventually allowed her to intercept the ball from her feet without committing a foul, as the following picture shows, before scoring the goal with ease and without complicating things since she was already very close to the goal. 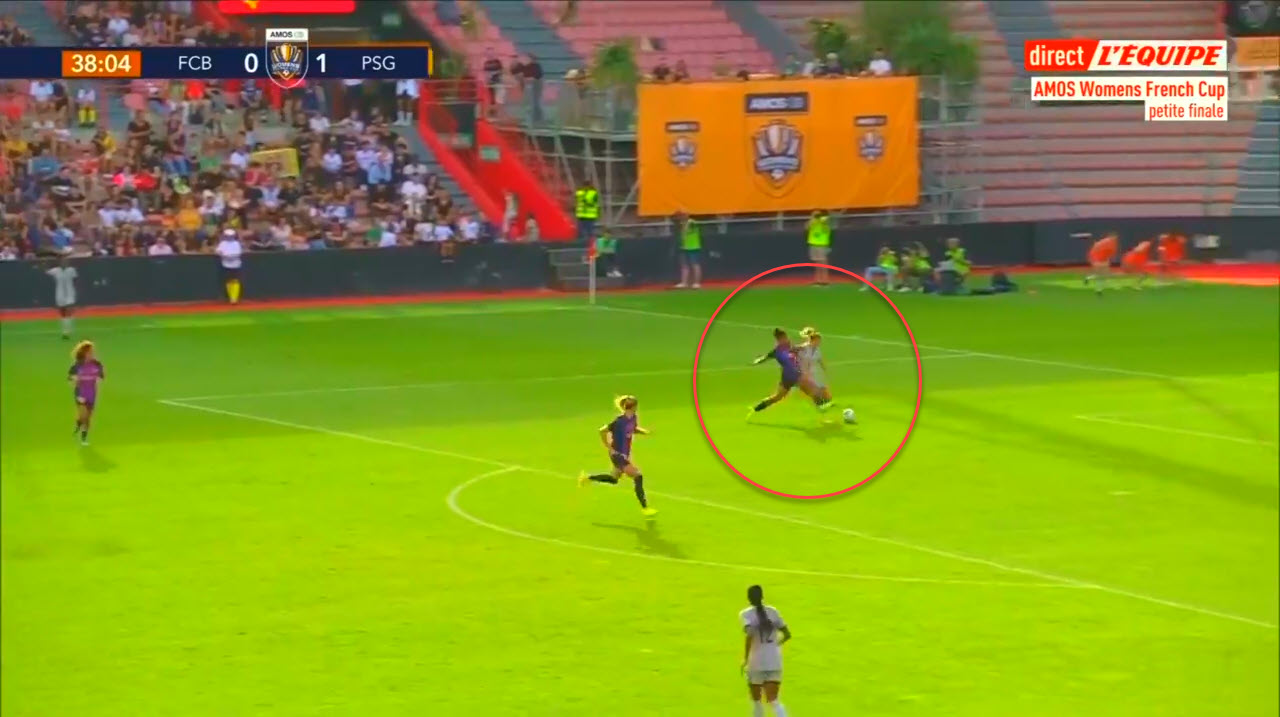 The following pizza plot gives us an overview of Geyse’s abilities, what she is excellent at and what needs improving in the future. In order to confirm her excellent seasons at Madrid CFF, Geyse will have to work hard on addressing her weaknesses and developing what she already masters in order to remain at the top.

In this regard, Geyse is actually one of the best dribblers in the Spanish Primera División as it is shown below, and in order to keep being among the best, she will have to work continuously on varying her dribbling techniques in order to not facilitate the defenders’ missions in one on one duels. In terms of shots and dangerous passes per match, Geyse is actually very good in this regard.

However, it will be very useful for her to work on her passing accuracy and especially her goal contributions per match. This doesn’t mean that Geyse doesn’t score as many goals as needed but it means that the number of assists she makes is not really big enough. Knowing that Geyse has got the vision and the passing skills needed to be a very good assist maker, it will be very beneficial for her and for Barcelona to work more on this aspect, especially if Giráldez plans on using her as a LW/RW more often.

Working on positioning inside the box and on winning more aerial duels per match will help Geyse be a more complete attacking player as well. 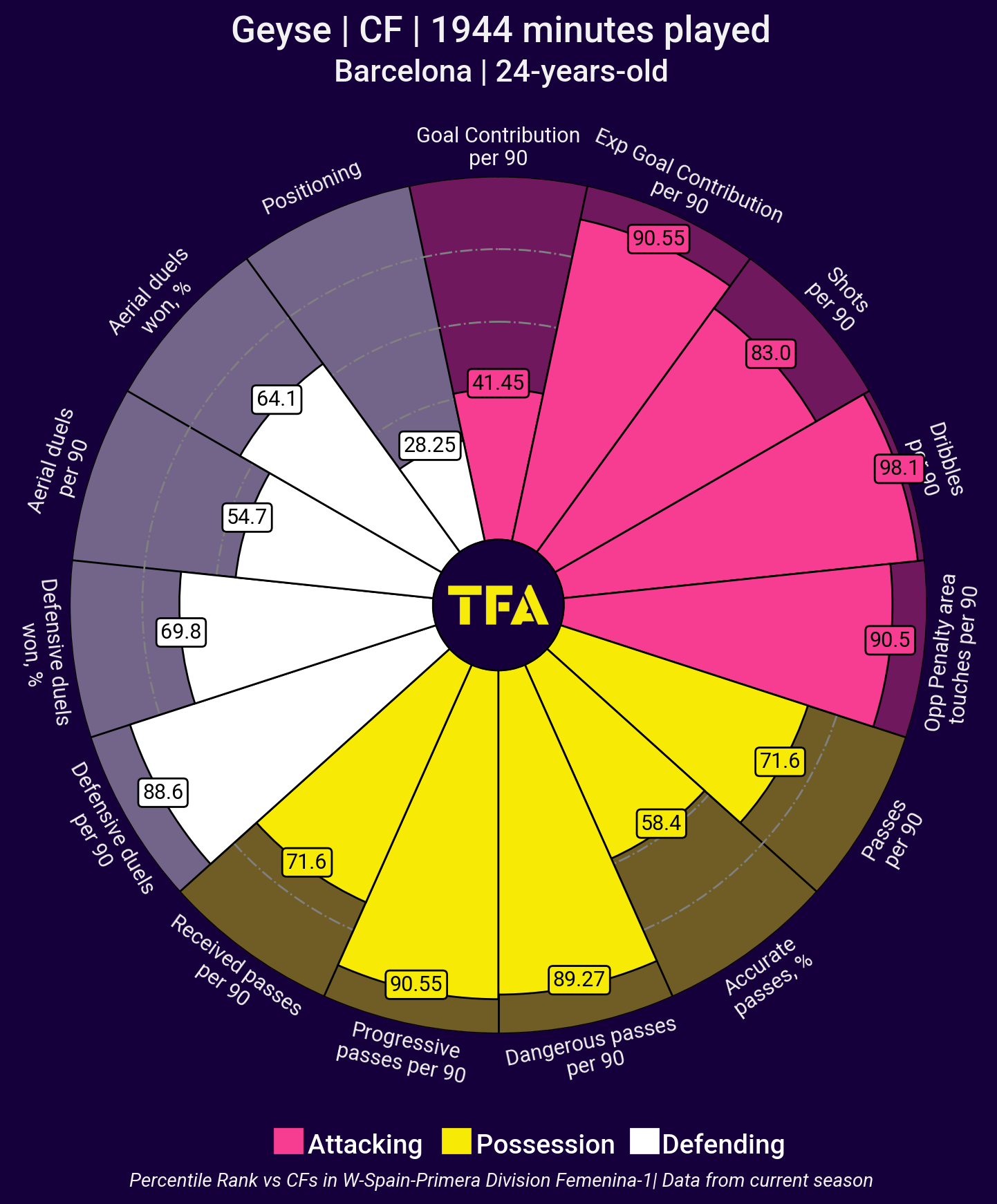 Geyse has been an excellent goalscorer for Madrid CFF and is expected to become a very reliable striker at Barcelona as well. She has already shown some glimpses of her goalscoring abilities with her new team since the start of this season and the variety of her finishing skills looked very promising so far.

The following example shows a goal scored against Athletic Club following a penetration from the right wing by Caroline Hansen and an excellent finish by Geyse. When Hansen was dribbling past her direct marker, Geyse anticipated her two marker’s movement and retreated a little bit in order to free herself and be able to receive a pass from Hansen. The latter immediately saw what Geyse did and served her well. Then, Geyse struck the ball on the top near corner with a first-time half-volley shot that the goalkeeper couldn’t save. 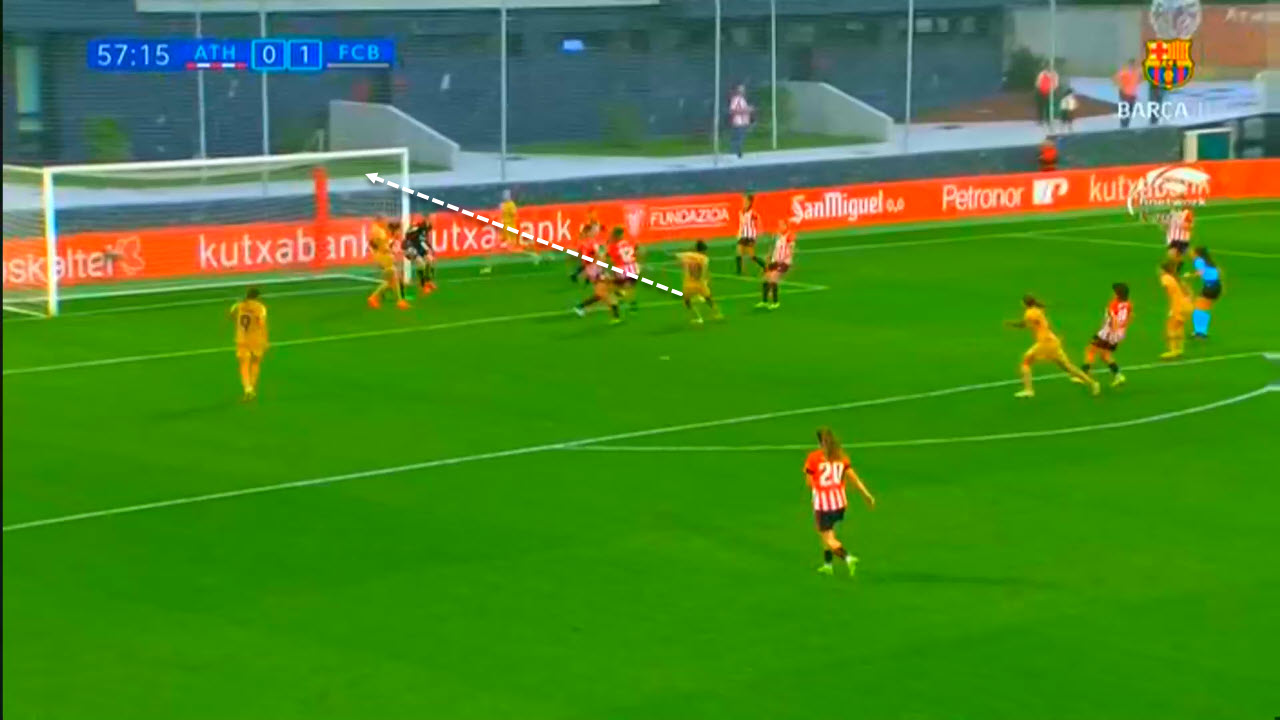 It is true that in the following action, Geyse was not marked tightly, yet this opportunity showcases her ability to score headers from quite long distances and be clinical in the air. As we mentioned above, working on these aerial abilities even further would help Geyse a lot in certain situations, especially when facing solid defences. 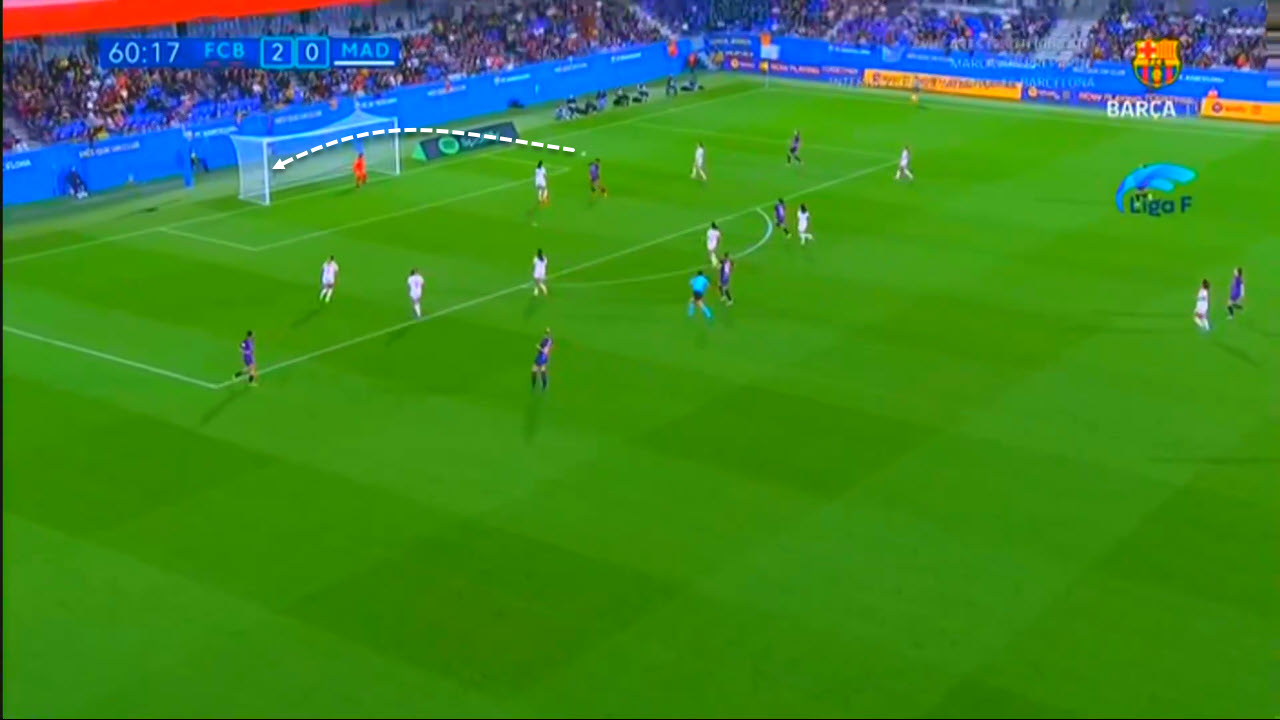 Geyse has also been very useful with her Brazilian national team as she was able to score numerous goals so far and will surely be one of the pillars of the team during the upcoming international tournaments. Her shooting techniques can vary a lot and opposing defences can expect her to shoot from different positions, and what is excellent about Geyse as well is that she doesn’t fear or think twice before shooting from distance or before attempting complicated shots.

This confidence in her abilities helps her a lot in achieving what she intends to do on the pitch, and with accurate techniques, Geyse has got the potential to become one of the most clinical finishers in Europe.

The next example highlights her ability to control the ball with her chest and immediately attempt a volley before the ball hits the ground. Executing this action with success proved once again that Geyse is a talented attacking player who has the technical abilities but also the right mentality to accompany her skills. 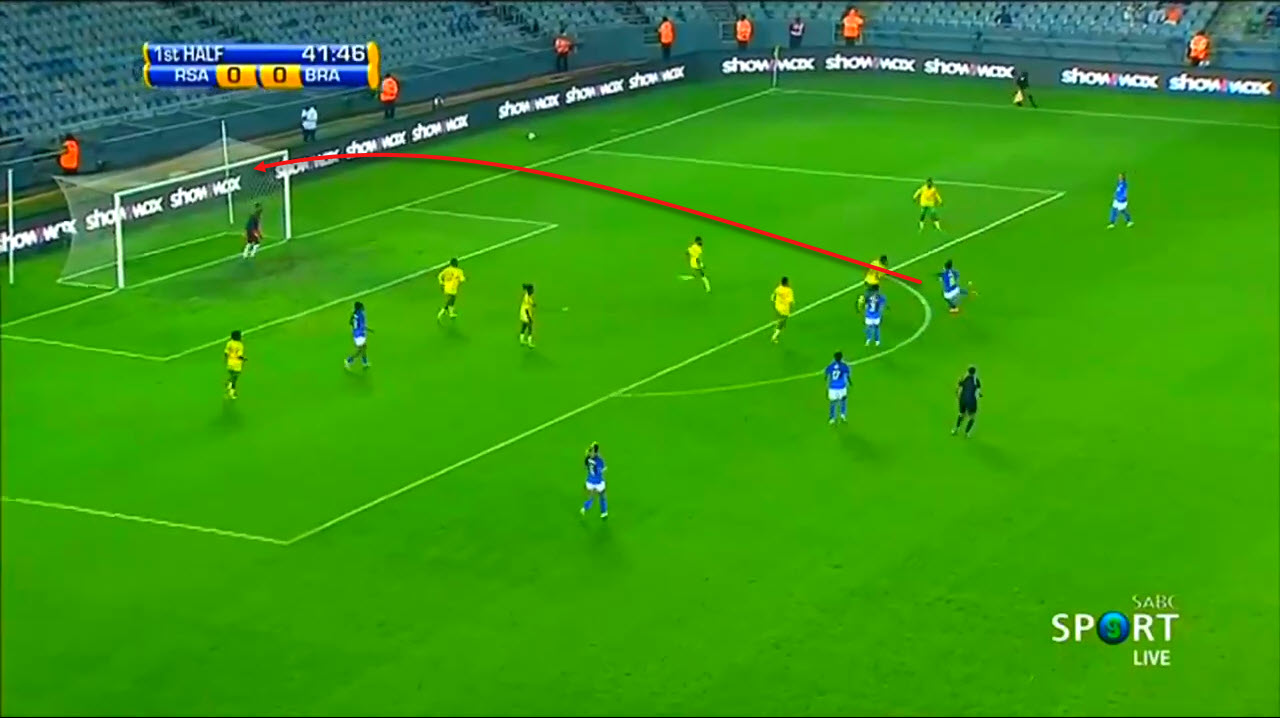 When it comes to playmaking, Geyse has been putting on some convincing performances whenever she was used on the right or the left wing. With her dribbling skills, she is always able to get past defenders and serve her teammates well. Nevertheless, she will need to be consistent in terms of key passing and assisting in order to become more convincing when interpreting these roles and even when playing as a striker. Having said this, we cannot deny that Geyse has already been able to provide some excellent passes to her teammates and not all of these passes have been used in the needed way. In other words, Geyse’s key passes were not always exploited accurately and many of them ended with missed or inaccurate shots from her teammates.

For instance, here, Geyse was able to beat Chelsea’s Magdalena Eriksson in their duel and advance with the ball before serving her teammate. However, Geyse’s excellent effort and key pass were not well exploited since the player missed the chance with a faraway shot. 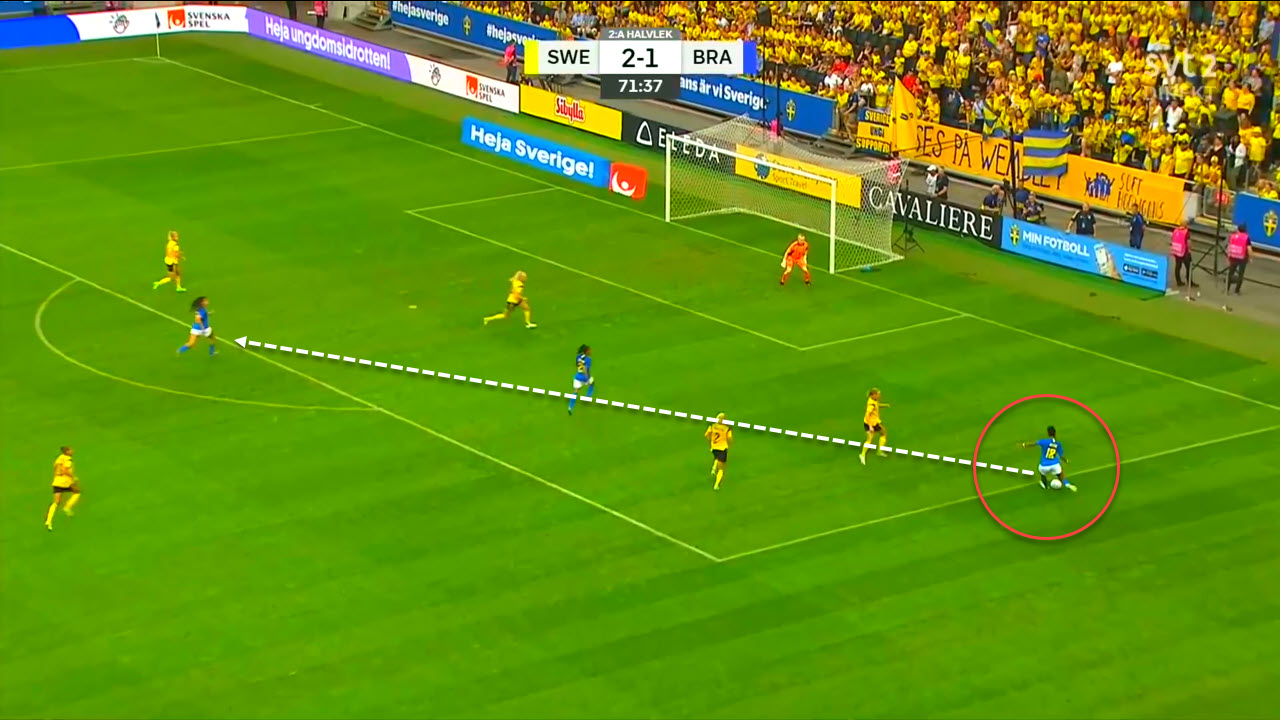 Overall, Geyse has got the potential to excel at Barcelona and she has already shown some very promising signs during this first part of the season. Being able to remain consistent in her performances with the team and to absorb the pressure while giving her 100% or not will determine if she will succeed and remain at Barcelona for a long period or not.

But in all cases, Geyse will surely continue to represent a target for most big European teams since she has all that is needed to succeed. And with players like Hansen, Ana-Maria Crnogorčević, Aitana Bonmatí, Ingrid Syrstad Engen, Alexia Putellas and the rest, Geyse has got all the supporting factors to bring the best out of her and put on her best performances in the near future.