Simone Pafundi: The next Italian gem who has already made his international debut for the Azzurri – scout report

Simone Pafundi became the youngest Italy debutant in a century and now scouts from across Europe will keep a close eye on the 16-year-old. The Italian teenager, who was barely three months old when Italy lifted the World Cup in 2006, made his Azzurri debut in their friendly win over Albania, becoming the youngest player for his country in over 100 years. Pafundi is one of the most exciting prospects in Italy and a bright star in the Udinese squad.

Pafundi showed positive signs on his debut for Italy and his arrival on the international scene has advertised him to clubs across Europe. The 16-year-old was already being followed by a number of scouts and this number will now surely increase following his Azzurri debut.

The 16-year-old Pafundi is contracted to Udinese until 2025 and has already made one appearance for the first team. In his time with the Primavera squad, the teenager has scored nine goals and provided 15 assists in 36 games. This tactical analysis and scout report will look at how Pafundi fits into Udinese’s set-up to become a future vital member of his team. We’ll provide an in-depth analysis of the main strengths and weaknesses of the Italian as well as how he fits into his side’s tactics.

Simone Pafundi was born in March 2006 in Monfalcone, which is a city near the Slovenian border. He started his youth career at UFM Monfalcone, joining his hometown club as a five-year-old. But the teenage prodigy made his mark after joining Udinese aged eight in 2014. He ran through the Serie A academy and has always been an important part of Italian youth national teams. In Italy’s U17 national team, he played five matches, scoring four goals and assisting two more. After rapidly rising through the ranks at the Italian club, he made his first-team debut towards the end of last season.

The 16-year-old has since continued featuring for Udinese’s Primavera side and has enjoyed a solid 2022/23 season. The youngster has three goals and six assists in ten matches thus far. And Pafundi has also made his Italy debut this season, making his bow against Albania in November. So, it is hardly surprising that top clubs like Napoli, Juventus and Real Madrid are closely monitoring his progress.

Pafundi is a left-footed, dynamic central attacking midfielder, who’s also used to play as a deep-lying forward or on the right wing. In his team, Pafundi is the creative spot. The young Italian likes to be fielded in a free role as an attacking midfielder, where he is given space to roam the pitch. He is responsible for the magical moments, takes set pieces and provides decent key passes. Pafundi is able to get out of various different scenarios, able to play wide and go direct, or be central and cut through the lines. He could be described as a difference-maker. 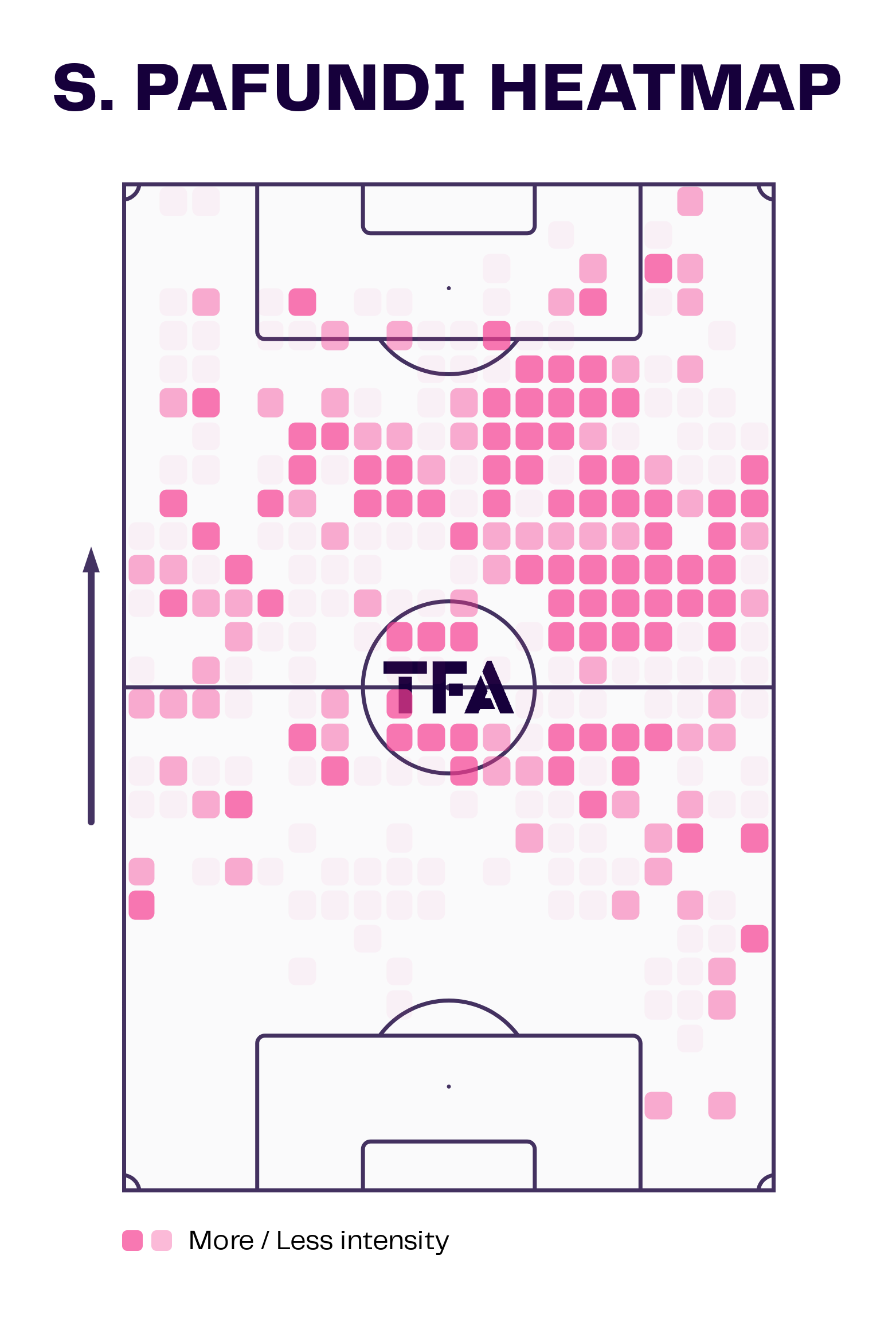 As already said, Pafundi is primarily used to playing as an attacking midfielder. But the Italian wonderkid is only 16 years old and can remodel himself as a central midfielder or a winger. Currently, his best role is playing as an advanced playmaker. Advanced playmakers register a high number of passes into the final third in matches they play as well as directly creating chances in possession. Players within this role tend not to perform a high number of defensive actions including recoveries in their own final third in favour of a more creative role on the ball. 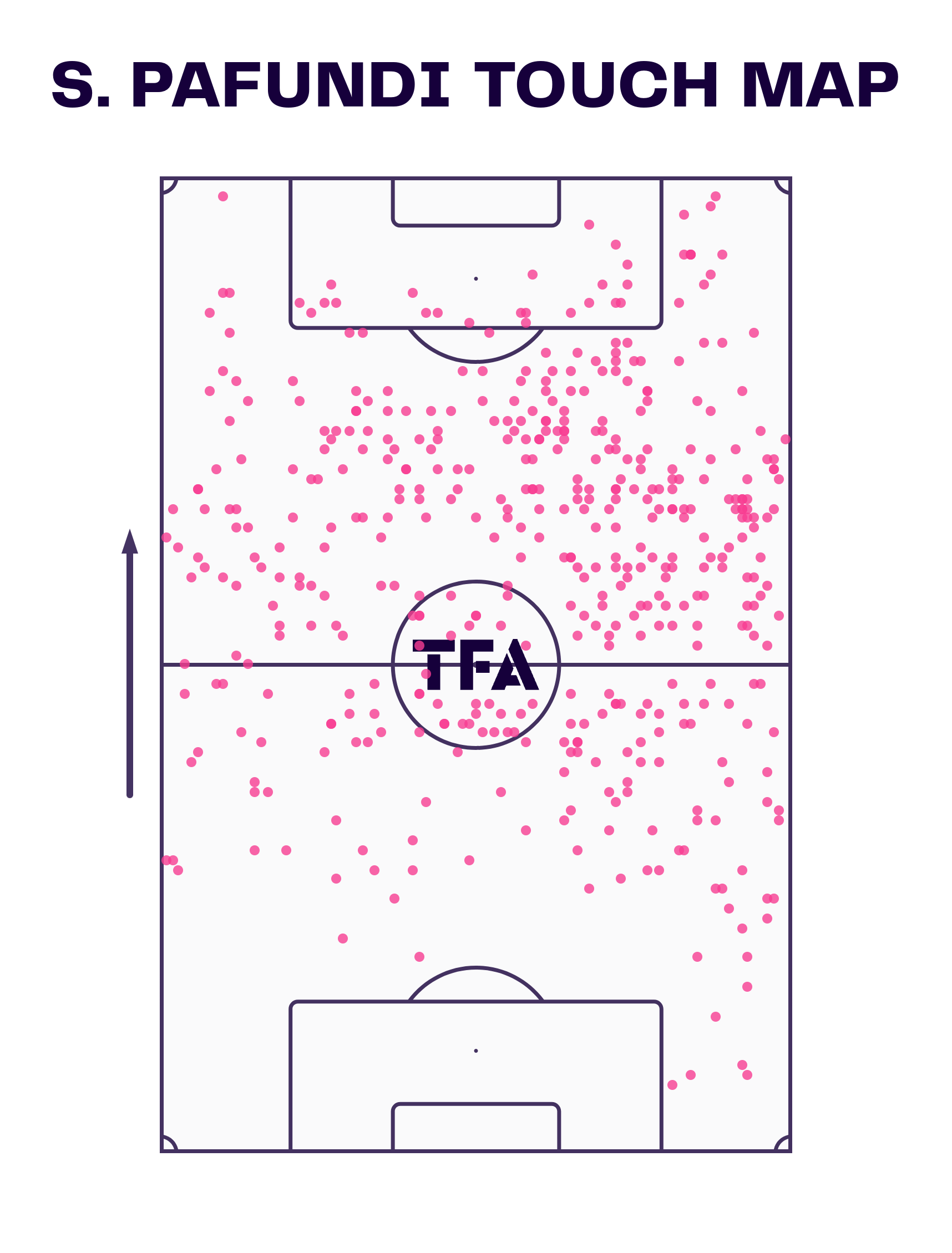 Pafundi is a very creative player. He proves that with his off-the-ball movements, and likes to find the best space to receive the ball with good timing. One of his biggest strengths is the link-up play between the team’s midfield and attack. 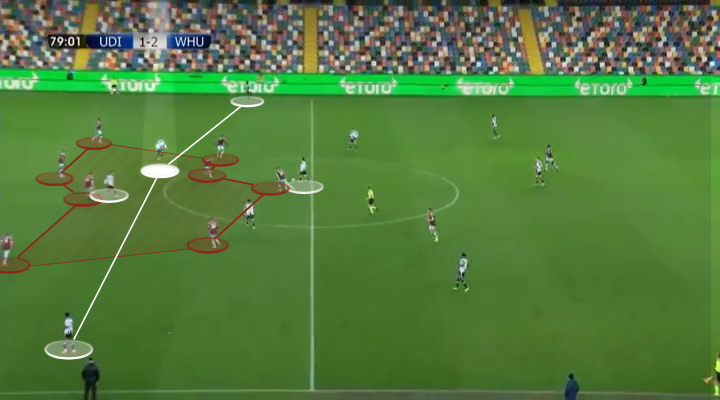 Pafundi’s awareness of his teammates’ paths is quite impressive. He holds the ball, and stalls a little bit, just in order to wait for an off-the-ball movement of his teammates. 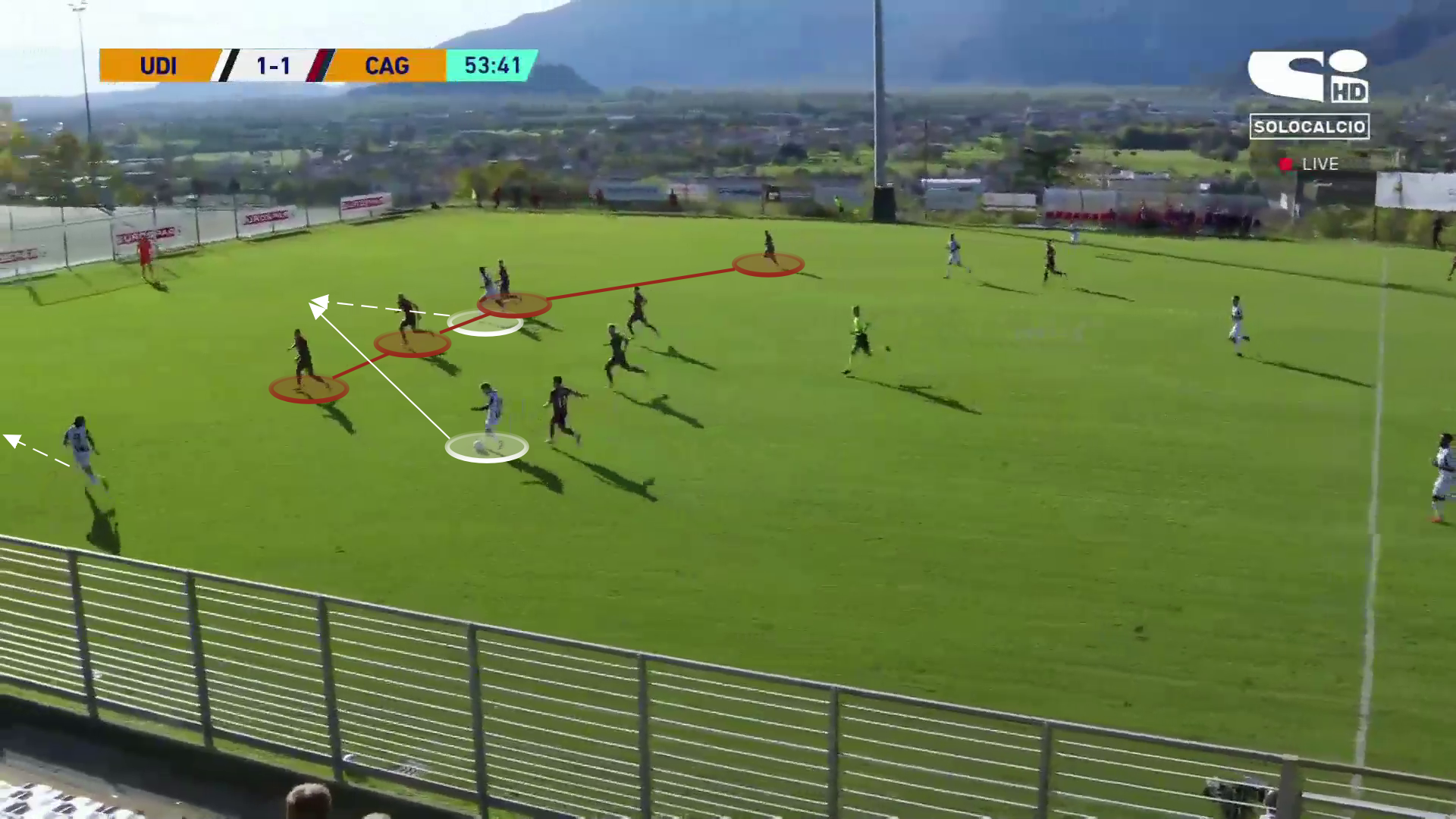 He is a player who always tries to find a vertical option in his game. This means that he is very capable of pushing his team forward to finishing positions. He likes to make quick first-touch combinations with his teammates and provides the technique, ability, and confidence to execute killer passes. In this way, he is always able to set up goal-scoring opportunities for his teammates. 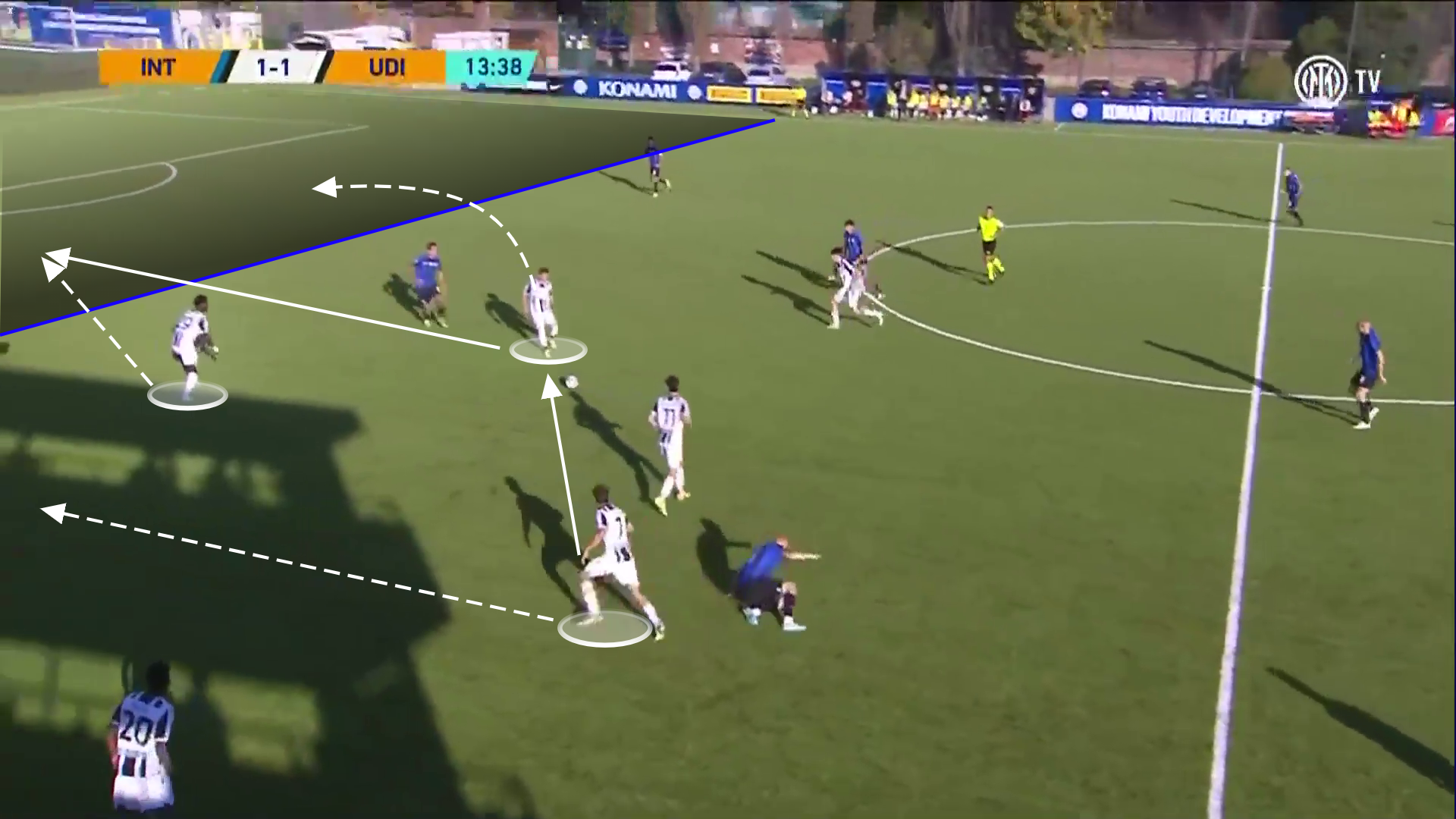 Additionally, he possesses very interesting mid-range and long-range shooting skills with his left foot. Pafundi’s passing accuracy isn’t the very best (76%). But, his flair for dangerous passes is amazing to watch. Yet, he’s too focused on his left foot, which allows opponents to shove on his right one. If he can improve his right foot, he’d be unpredictable. 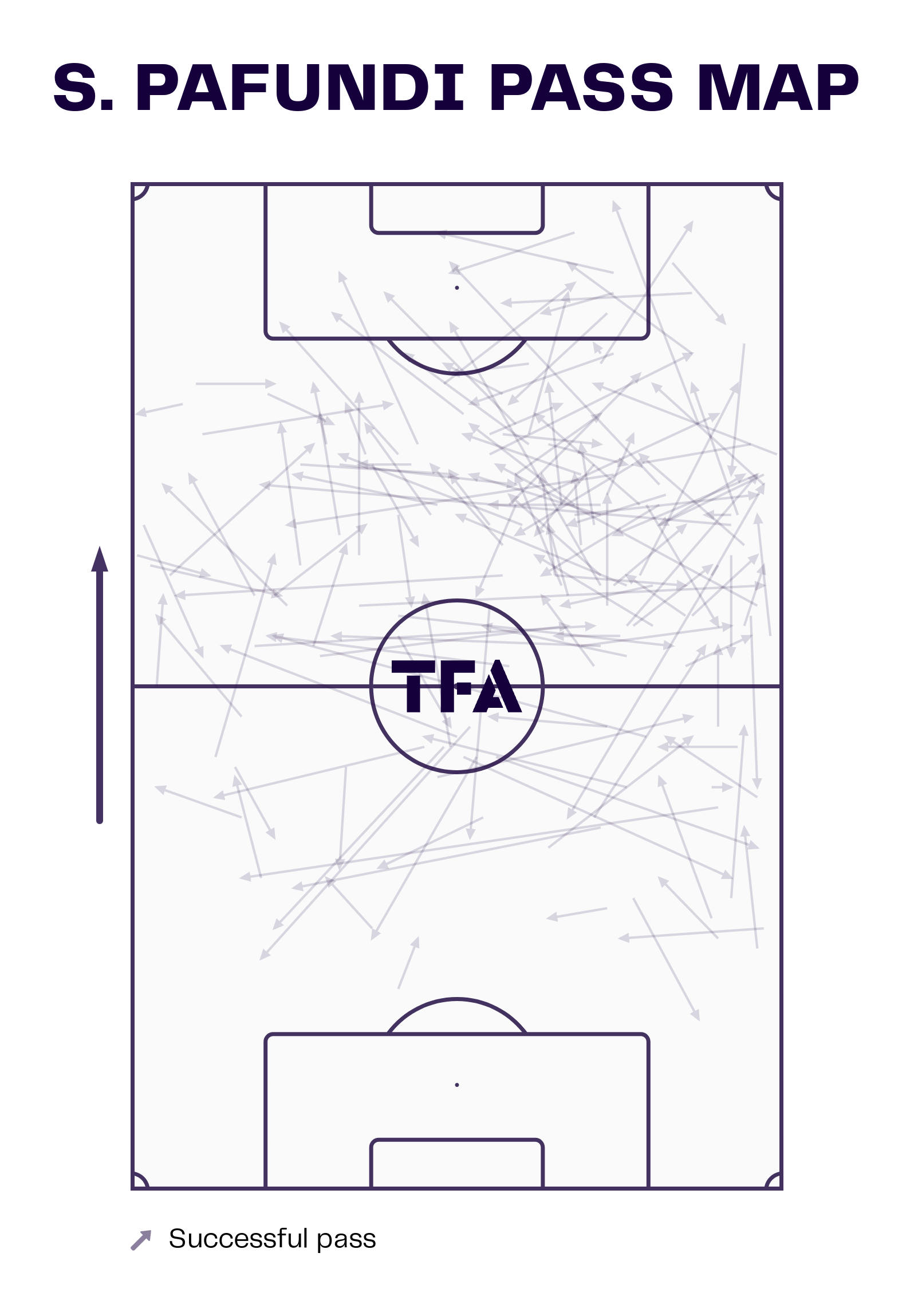 As already mentioned, Pafundi is a highly technical and creative player known for his “quick feet”, mobility, and close control. He is very strong in 1v1 situations, unpredictable, and very confident in his skills.

Furthermore, he displays a natural technique for taking fast decisions in tight spaces which makes him a press-resistant player despite his lack of physicality. Simone’s gift to solve pressing situations in tight spaces let defenders gain attention to him, which is useful for his teammates. 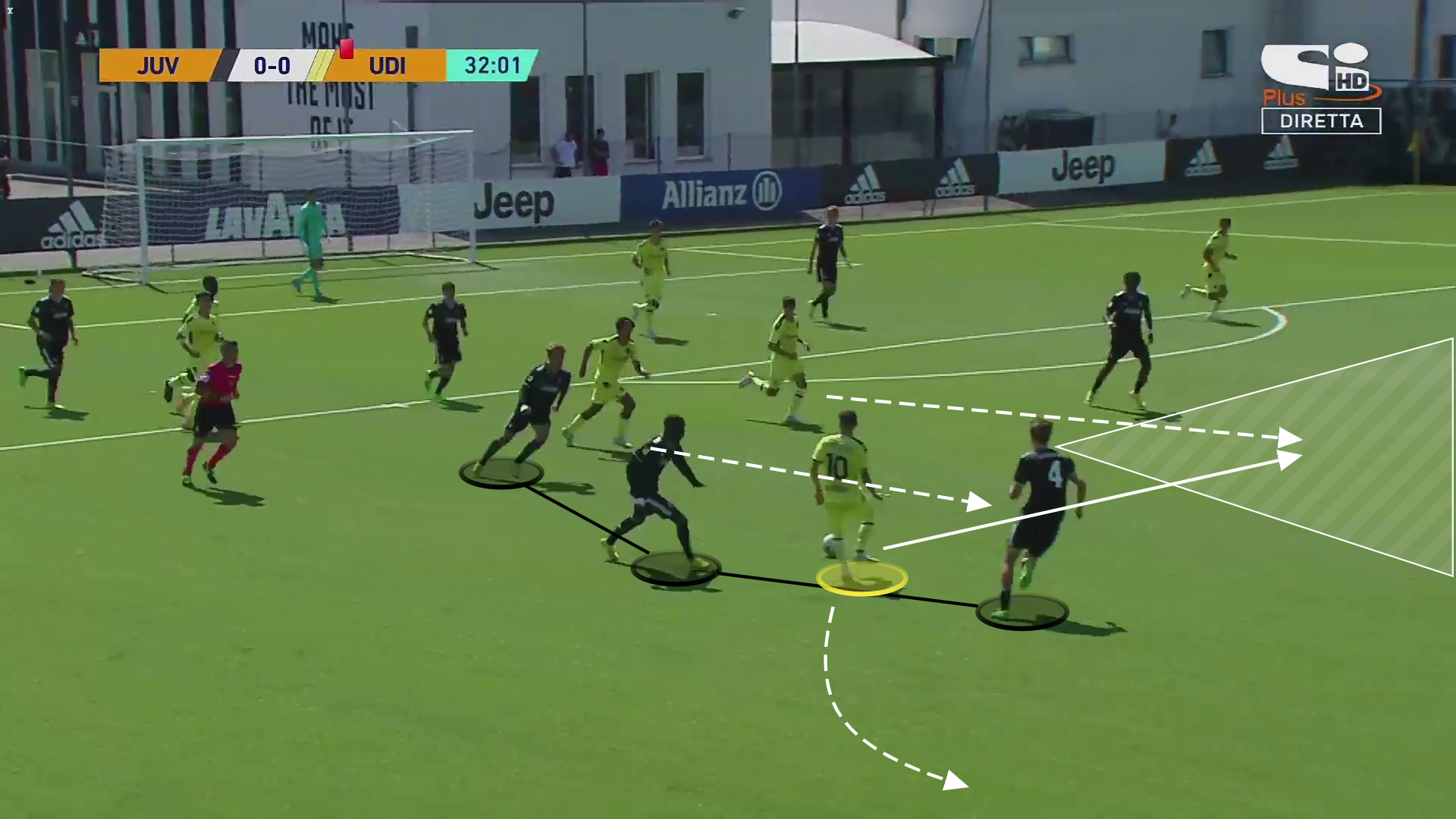 His first touch and general ball control show that he’s an incredible player in technical terms. Pafundi’s close ball control and his ability to take fast decisions at high speed predisposed him to be a ball carrier for his team. The Italian likes to attack from the right-wing or half-space, cutting inside and creating himself a decent opportunity to score or pass. 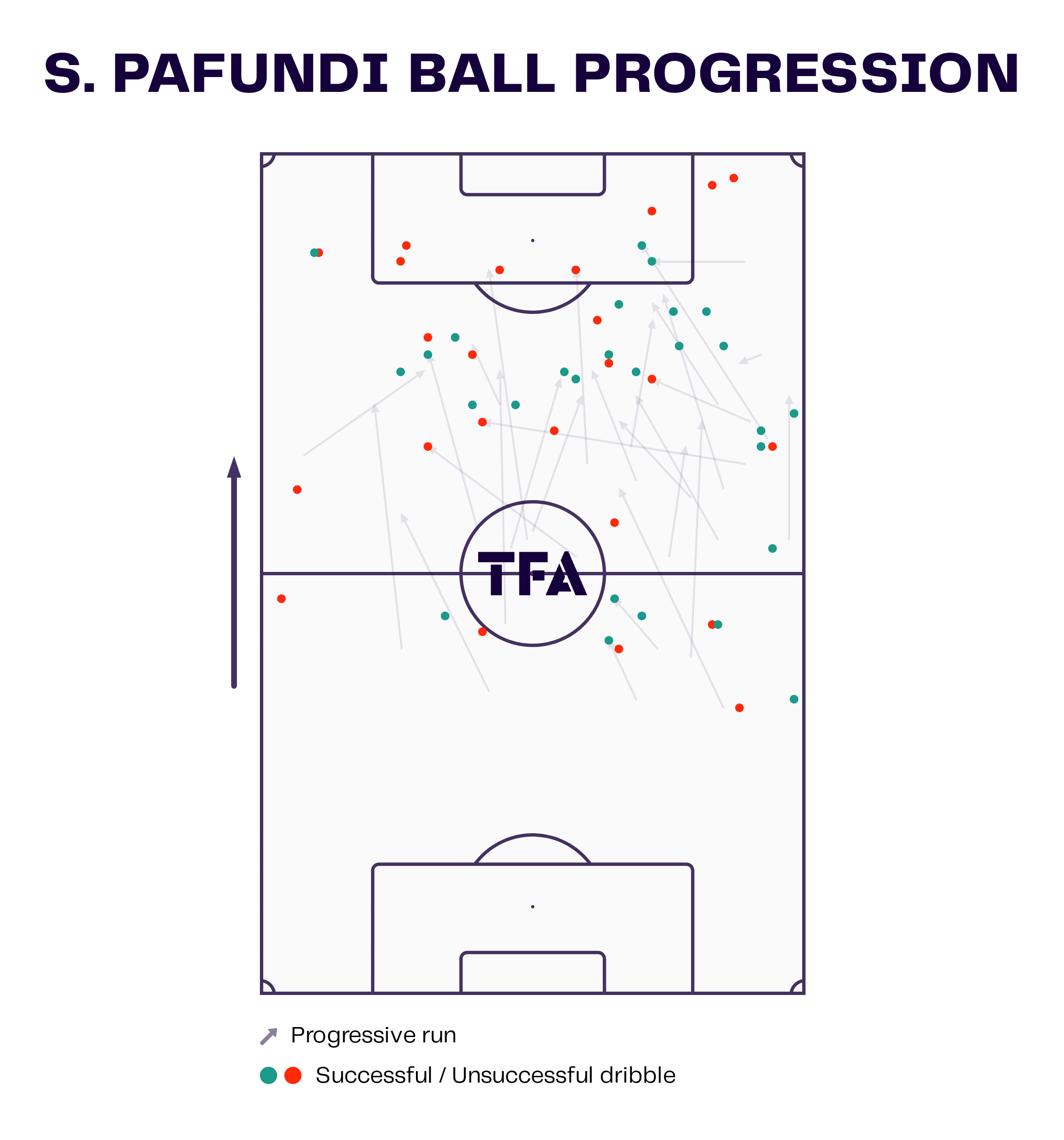 His precise shooting technique with his left foot is of very high quality already. However, often his attempts are too overhasty. Anyway, Simone knows how to shoot. He already proved numerous times, that he’s a good long-shot taker as well. 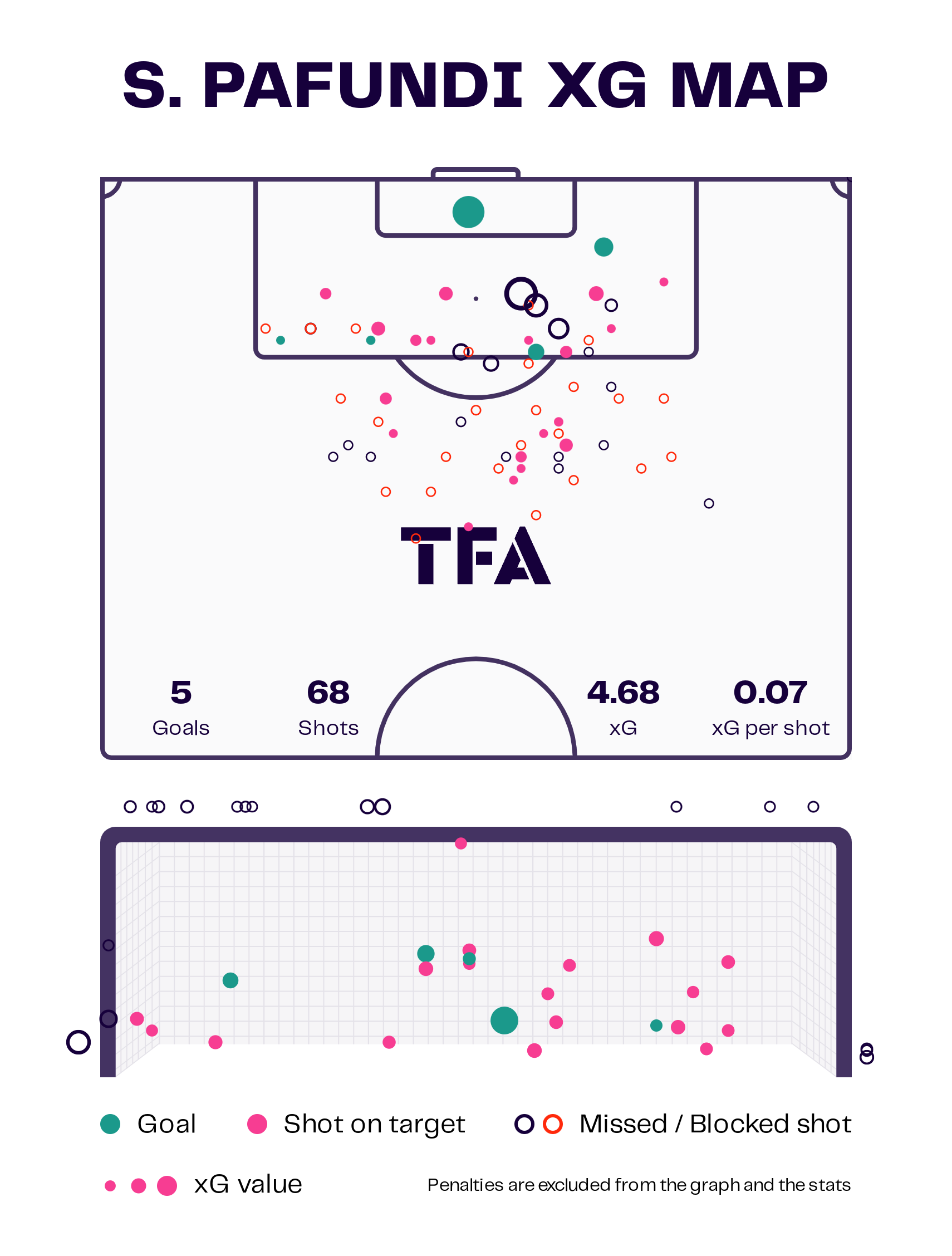 Simone’s set pieces are on an amazing level. He takes freekicks with such ease, but they’re still on-point most of the time. Also, he’s a very good corner taker and finds his teammates who are strong in the air.

By now, he lacks muscles, which makes it easy to beat him in a duel. Due to his lack of size, he is easy to beat in aerial duels. Even if he knows how to use his body and agility to evade physical challenges, he’s a player of a very small frame who doesn’t feel comfortable in contact situations – especially in defensive duels. Therefore, he tries to actively press early in order to win the ball back. Pafundi likes to press and hassle the opposition’s centre-backs effectively. 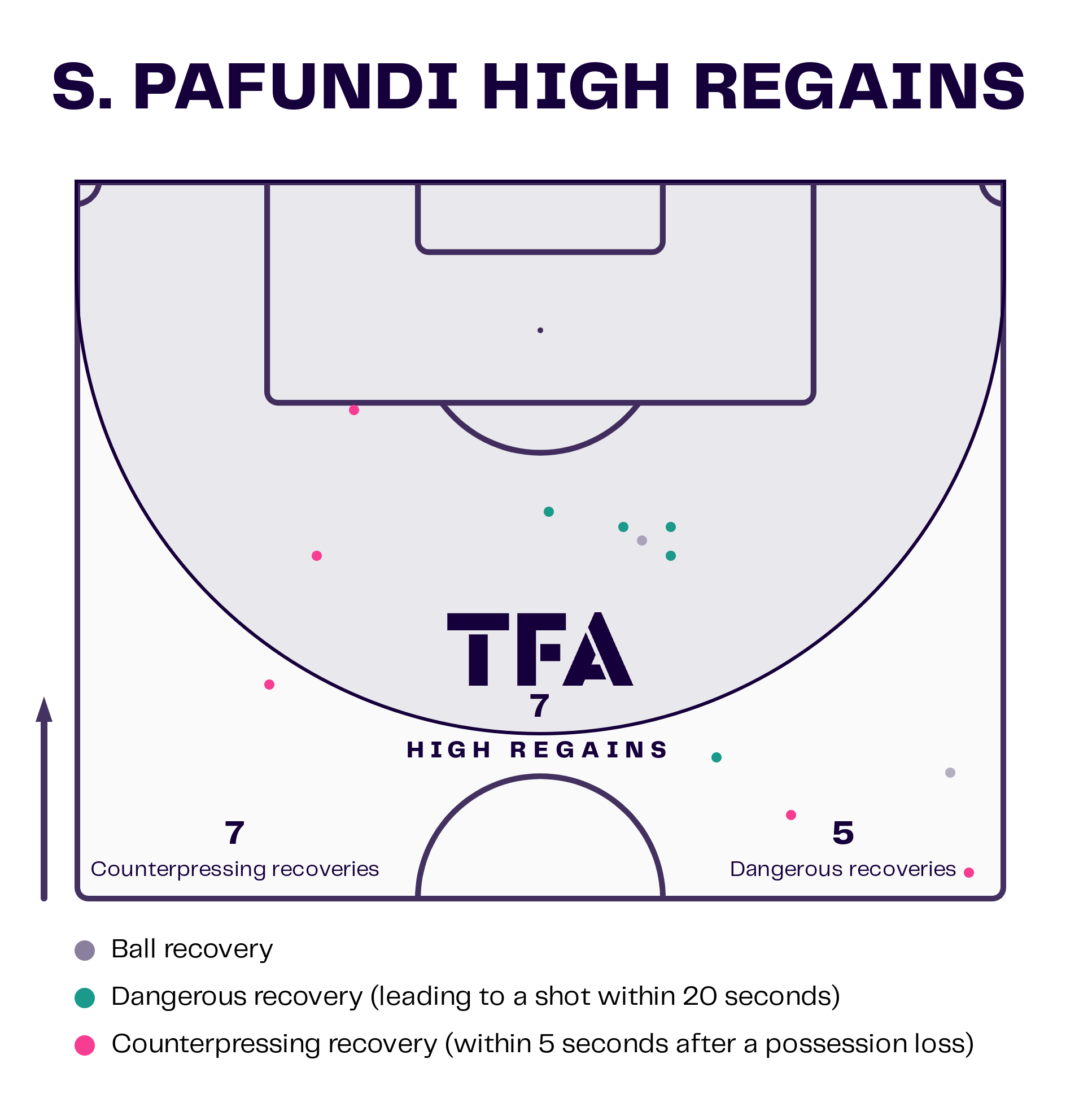 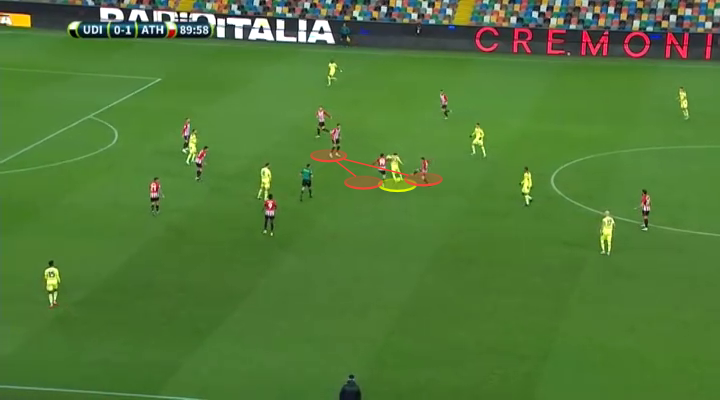 During counterattacks, the Italian youngster is extremely dangerous thanks to his pace and acceleration.

Summarized, he’s an amazing talent, probably the best one in Italy currently. He seems to be a quiet but determined player who likes to show his bravery and express himself on the pitch. At Udinese, he has a good environment, which will offer him playing time in the first team very soon.

Big things can be expected if his mentality lets him stay humble and ambitious. Pafundi is a player who has the potential to become a key player in a top European club one day.