The 2022/23 Serie A campaign has thrown us a few surprises already – Napoli dominating proceedings and becoming one of the most feared forces in Europe is arguably the biggest headline, and there may be a reason for that. Often, the key to success in elite football is having creative players in your team that can feed your strikers on a consistent basis. These creative players, who range from central midfielders to wingers, to full-backs, to strikers, also have to perform in other areas of possession, showing a good passing range for example, or being generally reliable on the ball.

In this data analysis, we will look to uncover some of the most creative players from the opening thirteen fixtures in Italy’s top flight, Serie A. We will use data to analyse their passing game as well as look at their statistics in other areas – dribbling for example. As the aim of this analysis is to shed some light on the creative ability of the players involved, we won’t be including any data relating to defending or goalscoring.

Involved in the data set is one player from each club – the player who currently has the highest number of Serie A assists for their club this season. In some cases, clubs have multiple players tied for that crown – this has been rectified by first looking at the number of assists this season in all competitions, and if there is still a tie, then we looked at data from last season to select our player. The data used in the analysis itself is taken from Serie A football only – no other competitions are involved.

We start this analysis with the segment that highlight’s the ability to create chances – starting with the most important, arguably! It also gives us a chance to introduce some of the players who stand out in assists and key passes. 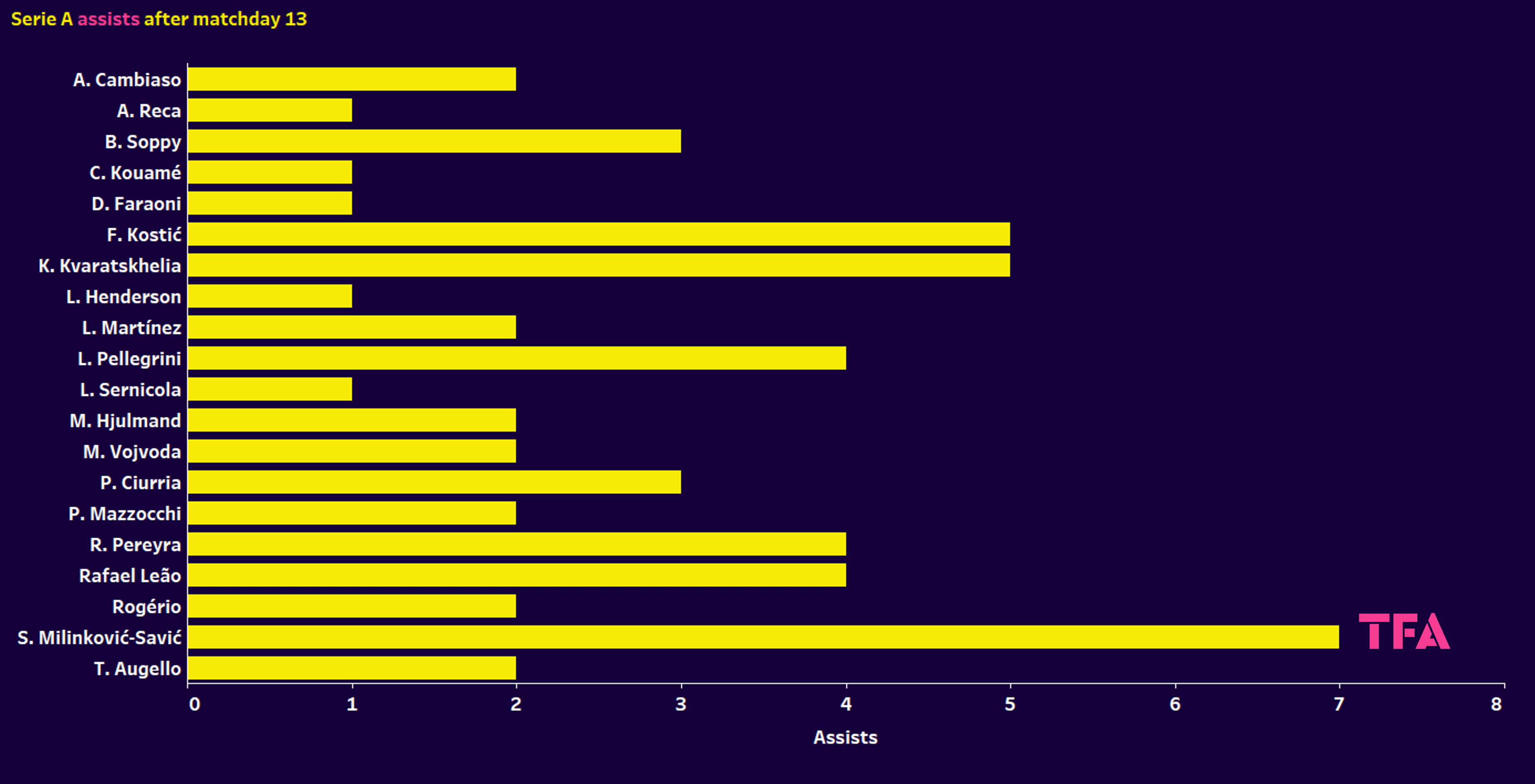 Straight away, one name jumps out. Lazio’s talismanic midfielder Sergej Milinković-Savić has been vital for his club for a number of years now, and only seems to be getting stronger each year – we could be seeing him enter his peak years as a player. Already this season, the Serbian midfielder has seven assists – the most by any player in the league so far. He is two clear of Filip Kostić (Juventus) and Khvicha Kvaratskhelia (Napoli) who both have impressed with five assists each.

All on four assists are AC Milan star Rafael Leão, Roberto Pereyra (Udinese), and Lorenzo Pellegrini of Roma. Between the three of them, they are a good advert for assists coming from a range of positions. Rafael Leão offers great technical ability either as a striker or winger, while former Watford man Pereyra can be an important link between midfield and attack. Pellegrini offers his creative ability from a deeper area in central midfield.

Wyscout defines a key pass as “a pass that immediately creates a goalscoring opportunity for a teammate” – basically the next best thing to an assist from a creative perspective at it still highlights the ability to turn possession into a genuine threat on goal.

A name that looks likely to crop up frequently in this report is Kvaratskhelia. He has taken the footballing world by storm this season, dazzling many with his high-energy attacking performances. Of the players involved in this set, he has the highest average of key passes per 90 with 1.66. This high number indicates good vision and decision-making, as well as the necessary technical ability required, consistency and reliability.

Two other names we are likely to see more of are Kostić and Rafael Leão. Both have demonstrated the ability to get in good positions to provide assists for their respective clubs, and it looks like they’ll be doing so across the season, according to the statistics – Kostić averaging 1.38; 1.24 for Leão.

Looking at some players we haven’t yet mentioned, Patrick Ciurria of AC Monza shows ability, averaging 0.82 key passes per match – a fairly impressive feat considering Monza’s struggled start to the season that leaves them in 15th. Pasquale Mazzochi (Salernitana) also appears to pose a similar threat with an average of 0.78.

As mentioned in the intro of this analysis, it’s important for creative players to offer their ability in other passing departments, especially if their club’s tactics demand it. Having the attacking desire and intention can help turn possession into an attack in the blink of an eye. Players who tick those boxes (creative, attacking desire) will look to move the ball forward as quickly as possible and as much as possible. 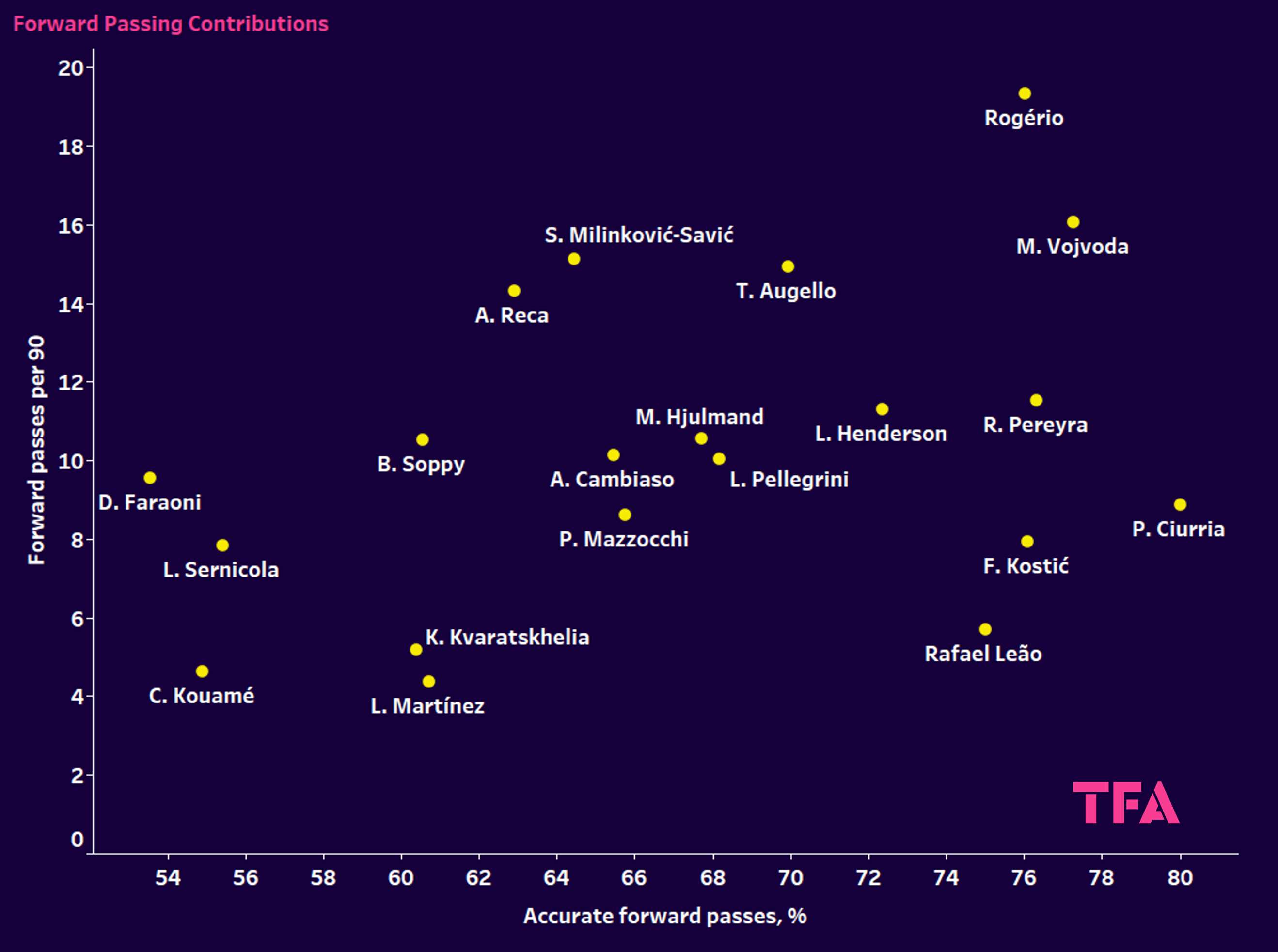 Above is a set of data that shows us how frequently these players pass forward and just how good they are at it. Rogério (left-back for Sassuolo) excels here, boasting one of the highest forward pass accuracies (76.02%) from an average of 19.34 forward passes per 90 – by far the highest amount.

The crown of highest accuracy with forward passes goes to Ciurra (80%), while Mërgim Vojvoda of Torino also impresses (77.27%). Kostić, Leão, and Pereyra all deserve another mention, this time for their accuracy in this area – it is the latter who offers a higher average of forward passes. 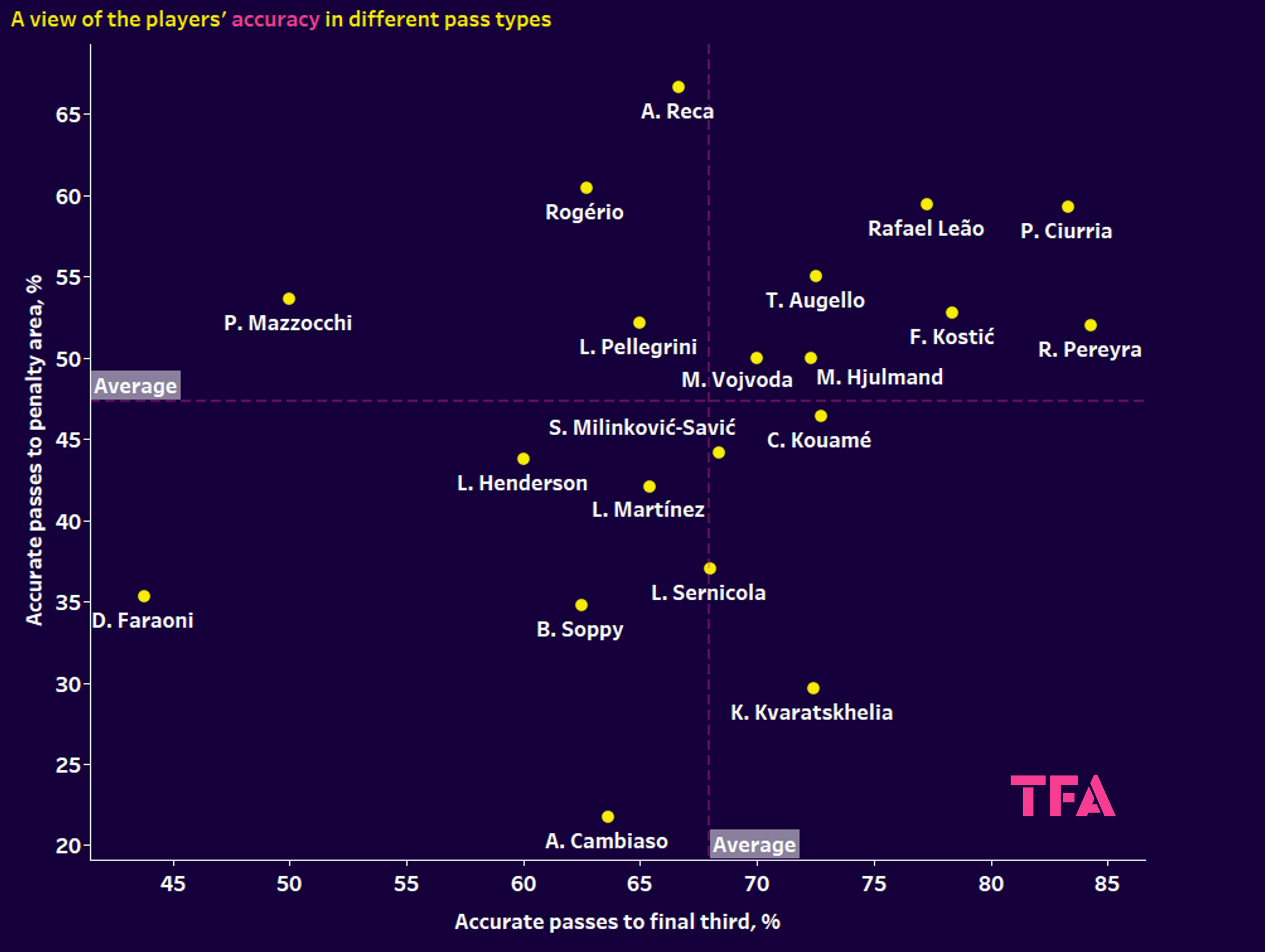 This next graph provides an even clearer idea of how these players take matters into their own hands when it comes to passing forward – it shows us their accuracy in passing into the final third as well as their accuracy in passing into the penalty area. While high numbers in these areas can indicate skill (and vice versa), it is important to remember that the number of passes played into these areas will differ based on club tactics and club level i.e., those teams lower in the league will struggle to get the ball forward as much or have lower quality chances in doing so.

However, some new names come into the fold as they land themselves in the top right box outlined by the pink dash-marked line of average – this indicates that they are above average (compared to the players in this set) at both passing into the box and final third. Tommaso Augello of Sampdoria (72.55% and 55%) and Morten Hjulmand of Lecce (72.31% and 50%) have both performed well in both passing metrics.

Rogério and Arkadiusz Reca are outliers in the sense that they have exceptional statistics when it comes to passes into the box, but their pass accuracy when passing into the final third is below average. 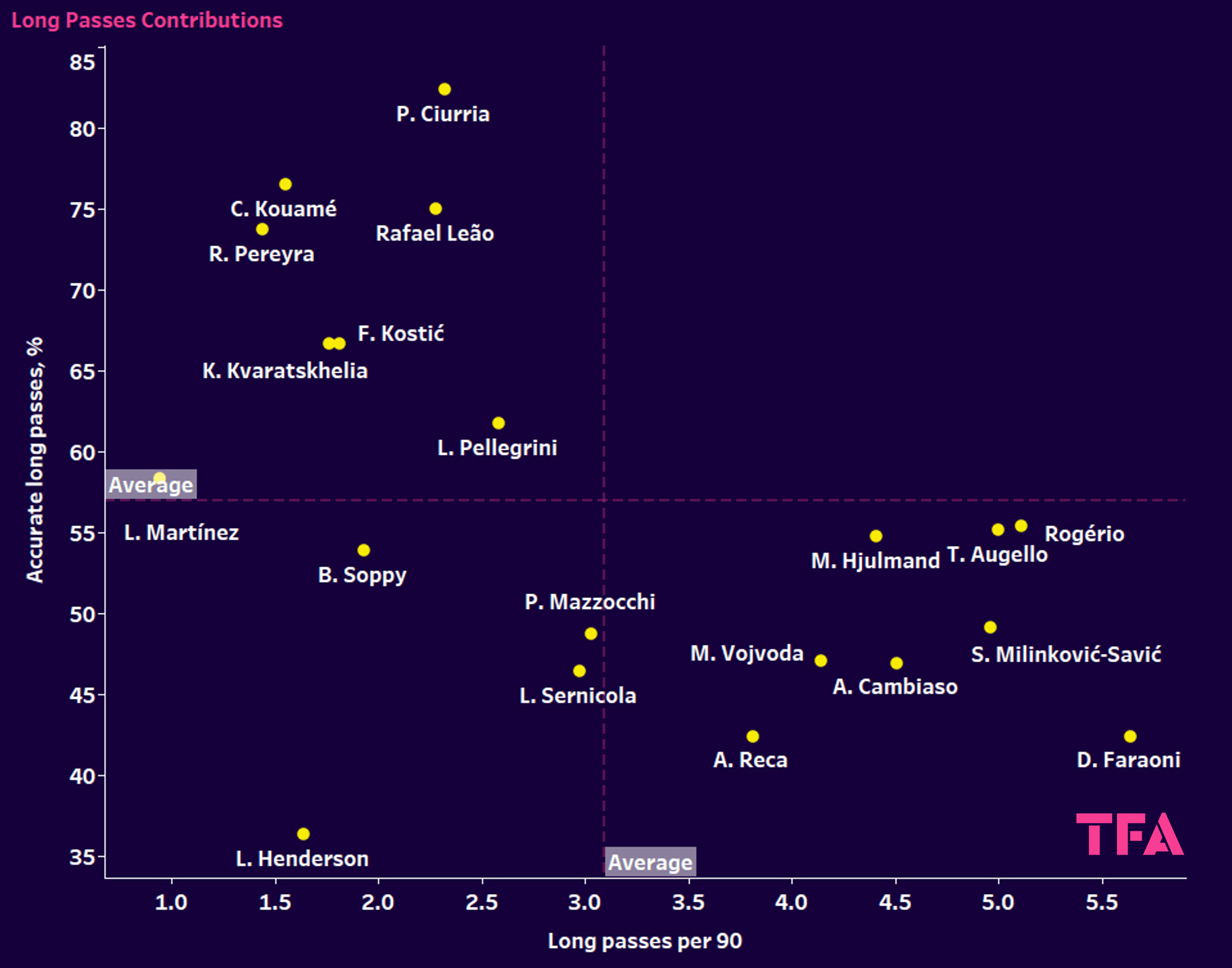 The last scatter graph in this segment tests the passing range of the players, looking at their long-passing data. Taking a look at the frequency in which each player makes a long pass can give insight into individual qualities like confidence and vision as well as club tactics, while a high accuracy rating could indicate technical ability and consistency.

Interestingly, nobody in this set makes it into the promised land that is the top right corner of the average divide, meaning nobody has a high average number of long passes with high accuracy to go with it. Instead, there are players who have high frequency with below-average accuracy – Davide Faraoni of Hellas Verona has the highest frequency (5.64) but one of the lowest accuracy rates (42.42%).

On the flip side, Ciurria’s name comes up again thanks to his below-average frequency (2.32) but the highest accuracy rate of the lot with 82.35%, demonstrating a real talent for picking out long passes.

Other areas in attack

To finish things off, we will take a brief look at two areas that aren’t entirely focused on the art of passing: dribbling, and overall successful attacking actions. Looking at the statistics for dribbling could give more insight into the creative level a player is operating at as a dribble can sometimes be better than a pass at creating an opening. Analysing the data of successful attacking actions purely gives us a better picture of the type of player someone is and their general involvement in the attack. 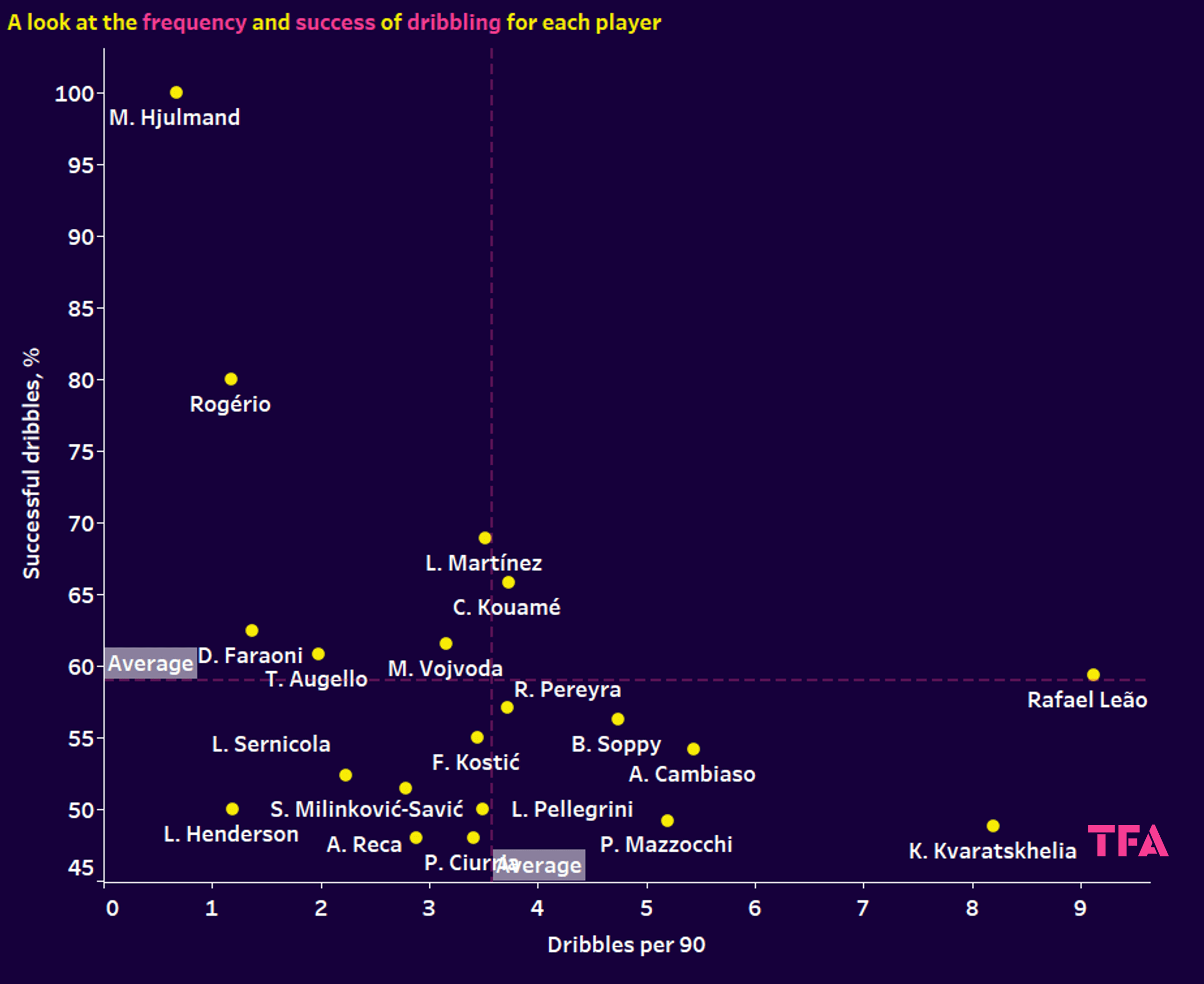 This graph shows us how much a player dribbles, along with how successful they are in doing so. Straight away, three names jump off the screen. Leão shows us that passing isn’t his only asset as he looks to dribble very often – 9.12 times per 90 minutes to be exact! His success rate of 59.38% is just above the average of the set – when you realise that this means he averages roughly 4-6 successful dribbles every game, you also realise how dangerous this player can be. Kvaratskhelia also has a high dribbling frequency but hasn’t amassed the success rate as the aforementioned AC Milan counterpart.

On the other end of the scale, we get a sense of how doing something sporadically can pay off. According to Wyscout’s data, Hjulmand, who averages 0.67 dribbles per 90, has a 100% success rate – impressive, absolutely, but it would interesting to see if a) that stat is 100% accurate (pun intended) and b) Hjulmand could maintain a high success rate if his frequency increased.

Finally, we look at the number of successful attacking actions made by each player every 90 minutes. As mentioned, this helps to give us a clearer idea of what each player is like in a more rounded sense that still involves creativity.

It is no surprise that Leão stands out again – the Portuguese man is some talent! His average of 8.27 is far higher than anyone else’s in this report and only acts as further proof that he is incredibly important for AC Milan. Napoli’s Kvaratskhelia also ranks highly again (5.95) – the Georgian player has been a real diamond for his club this season and continues to raise his importance for them.

This data analysis looked to shed some light on the creative ability that is on display up and down the Serie A table. While it has cemented the top-class status of some players such as Leão, Kvaratskhelia, and Kostić, we have also seen some names emerge that may have been unexpected to some.

Patrick Ciurria has looked really good if you look at these graphs – a player who can produce quality when it comes to creating attacking chances.

There is a cluster of other names that surprised in a positive way in some areas, proving that there is quality on display in all Serie A teams this season. 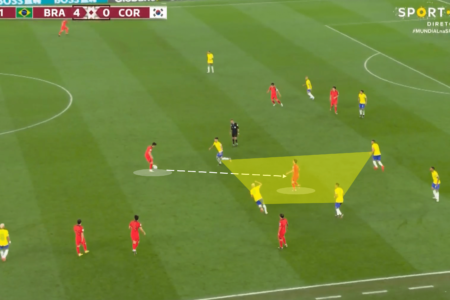 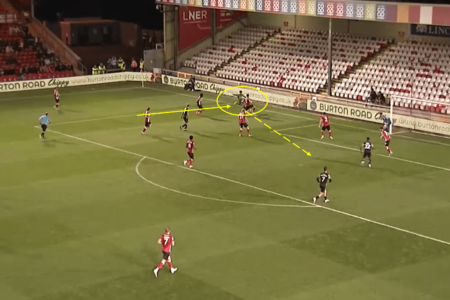 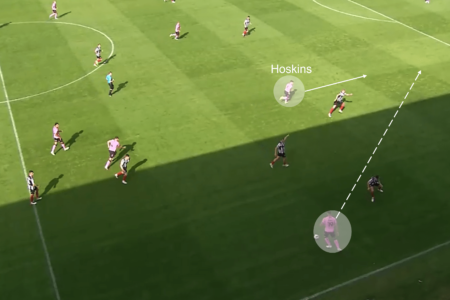