Central midfielders in the modern game are generally expected to be all-rounders. Gone are the days of specialists in the centre of the park where players may be expected to have one specific skill set that they brought to the team.

The old ideology around team building, for example, would be that in a midfield three you could create a system with three specialist roles, one would be the ‘passer’ one would be the ‘runner’ and one would be the ‘defender’. In the game today central midfielders would typically be expected to be proficient in at least two of those roles in order to be considered a good player at first-team level.

Whilst we do believe this is true, there is still a place for a specialist in the centre of the midfield but only if they truly stand out in one of the categories mentioned above. They then have to be capable of fulfilling at least one of the other specialist roles, even if that is at a lower level of output. In order to fully examine this theory, we wanted to identify a central midfielder in League Two who is a true standout when it comes to progressing the ball.

It is completely normal in football (even amongst those that work in player recruitment) to have certain biases around the type of players that they like in different positions. The key though is to recognise these biases and ensure that they do not completely cloud your judgement. One of my own biases is a preference towards central midfielders who are strong in terms of ball progression. So, as a starting point let’s identify the most progressive passing midfielder in League Two amongst central midfielders. 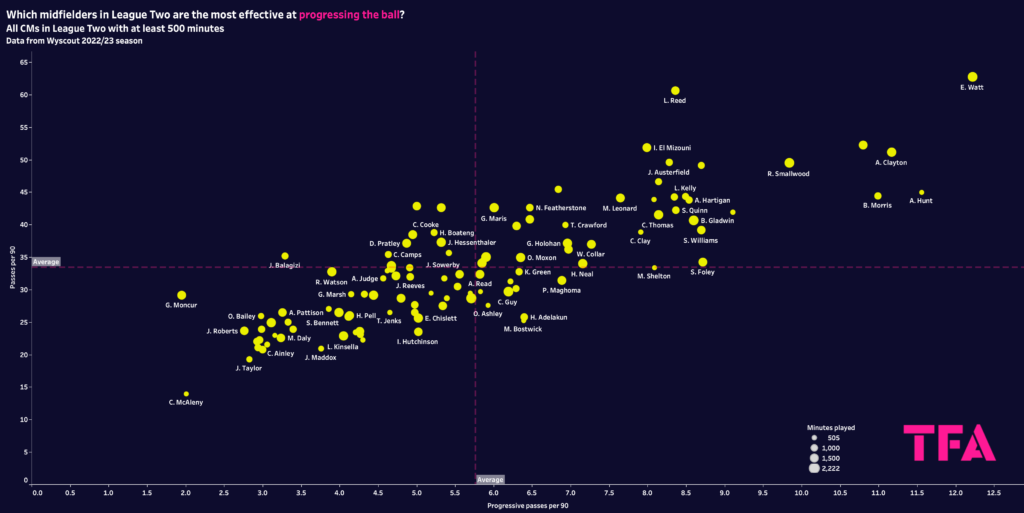 Confession time. I already knew that the answer to the question was going to be Elliot Watt of Salford City. Why? Well, because when you talk about progressive passers in League Two, the answer is almost always Elliot Watt. The 22-year-old Scottish central midfielder moved in the summer on a free transfer from Bradford City to Salford City in what was one of the coups of the pre-season for me. I was surprised that Watt did not make at least one step up the football pyramid but with the budget of Salford, they are often able to recruit players who we might expect to see moving up at least a level.

The scatter graph above is fairly self-explanatory in that it shows passes and progressive passes for all central midfielders in League Two this season who have played at least 500 minutes. Elliot Watt is the clear standout with an average of 62.76 passes per 90 and 12.22 progressive passes per 90. The Scottish midfielder is typically an aggressive passer in the midfield with a clear tendency to move the ball through the thirds and to test the opposition’s defensive block. We can though, of course, use data to give us a more complete picture of the all-around game of Watt. Does he fit the criteria as a midfielder who is a standout in one area while being balanced in others?

In this tactical analysis, we will examine the impact that Elliot Watt has had on Salford City and their tactics since joining in the summer.

What does the data tell us? 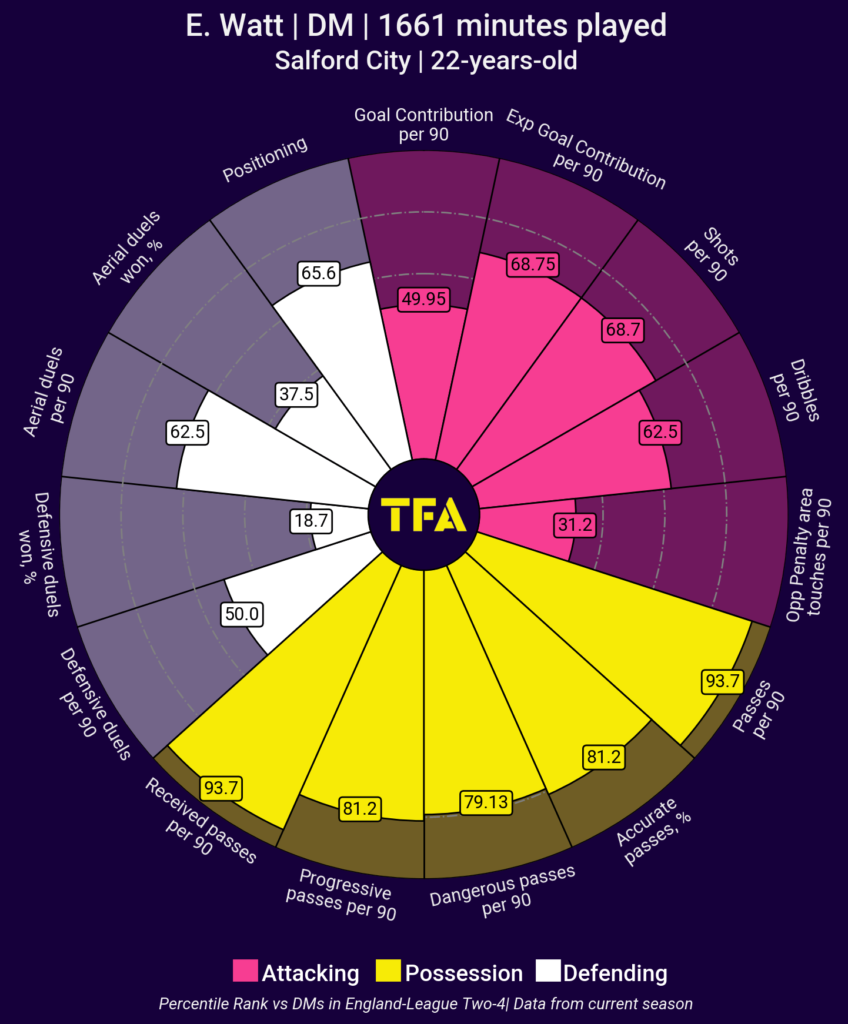 Crucially though, we can also start to see that the former Wolverhampton Wanderers academy player is also contributing in the other phases of the game. He is in the 68th percentile for expected goal contributions, although this likely comes as a result of the danger that Watt creates from set pieces with his ability to also take corners and direct free kicks around the final third. Also in the attacking phase, Watt is in the 68th percentile for shots per 90. Despite playing primarily as a ‘6’ for Salford, the midfielder is showing that he is capable of contributing to the team in the offensive phase.

Watt is also a midfielder who contributes in the defensive phase, if not quite as much, and for a ‘6’, the key metrics here are defensive duels per 90, 50th percentile, and positioning, 65th percentile, this positioning metric takes into account blocks and interceptions.

There is no doubt from these metrics that Watt, who has played 1661 minutes so far this season in League Two already, is one of the most capable central midfielders in his division. Let’s dig deeper into his performances though.

When you work in recruitment within football it is important that you recognise the value of context. We know now, for example, that Elliot Watt is an extremely capable progressive passer within his level. What does this mean though? Progressive passes are tagged within Wyscout to include the passes that you might expect, line-breaking passes that move through the thirds or switches of play, but there are also passes that are included that could otherwise be categorised as clearances or long balls that are aimless.

This is why it is important that within recruitment you use video or live scouting in conjunction with data. This allows you to add depth and context to your evaluation of a player. In this instance, Watt is a player where the video matches what we are seeing in the data. He is a midfielder who is extremely aggressive in his passing with a clear tendency to move the ball to the final third and to look for opportunities to break the final line and attack the space behind the opposition’s defensive line. 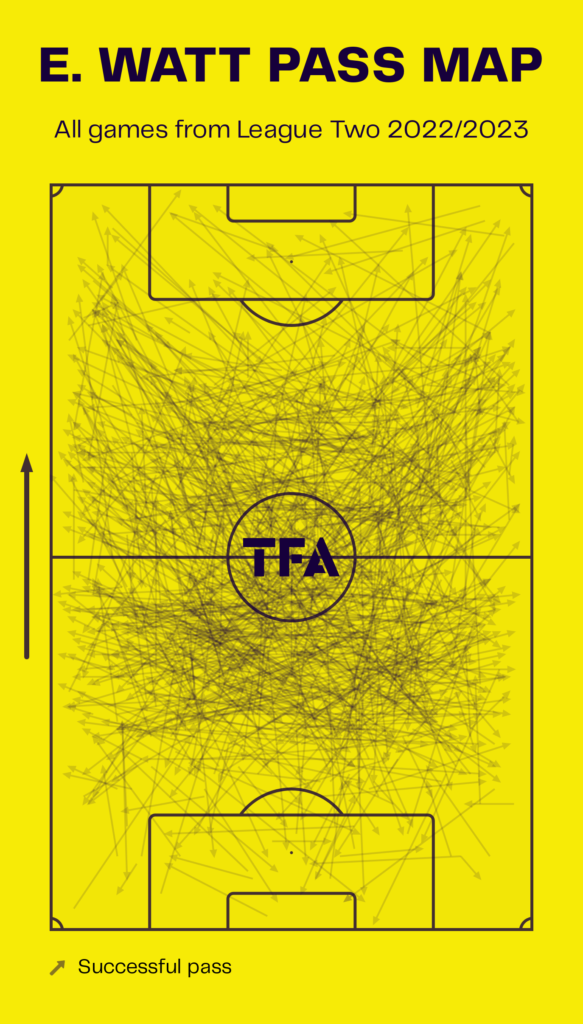 The first thing of note when we look at Watt’s pass map, for matches this season in League Two for Salford City, is the sheer volume of passes that he has played. This is in keeping with his high percentile ranking for passes per 90 and received passes per 90. Despite being a new player for Salford this season, he has quickly established himself as one of the most important players for the club in terms of moving the ball forward in possession.

We can also see though that he is not a midfielder who will limit himself to only central areas or to one zone when playing his passes. Instead, he is mobile enough to cover the width and depth of the pitch and get on the ball and create danger when doing so. 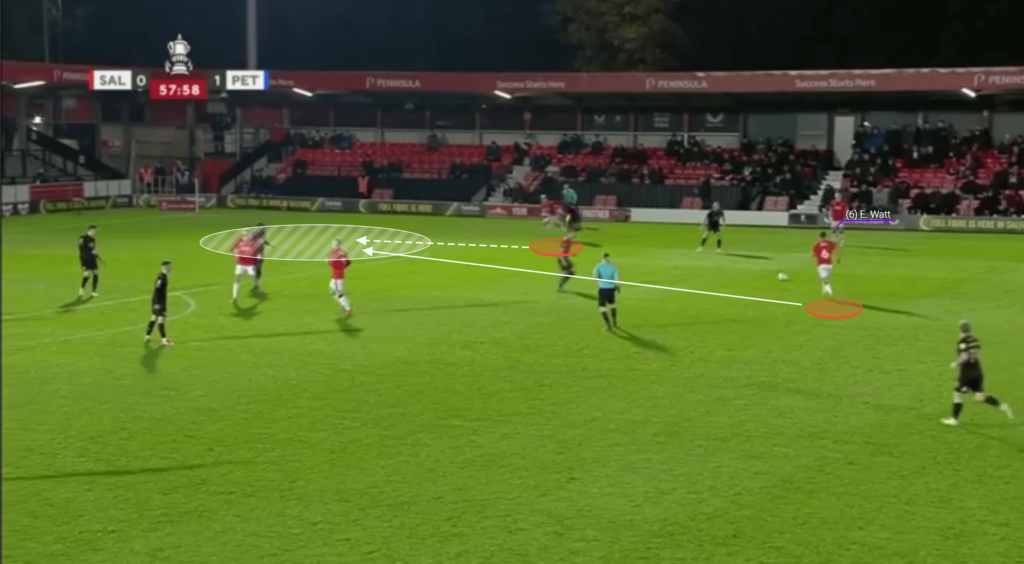 Watt has a clear tendency to play from the base of the attacking structure for Salford City and when he is in possession of the ball in these areas he produces significant danger to the defensive line of the opposition with his ability to play driven passes that break the line and threaten the space behind the defensive line. In the above example, we see this in action as Watt receives the ball inside, positioned at the edge of the final third and in the half-space. One of Watt’s biggest strength’s lies in his game intelligence and positional awareness and as he receives the ball, he already knows where he wants to put the next pass.

He plays a well-weighted right-footed pass that splits the space between the opposition defenders and releases a runner behind the defensive line and into space. 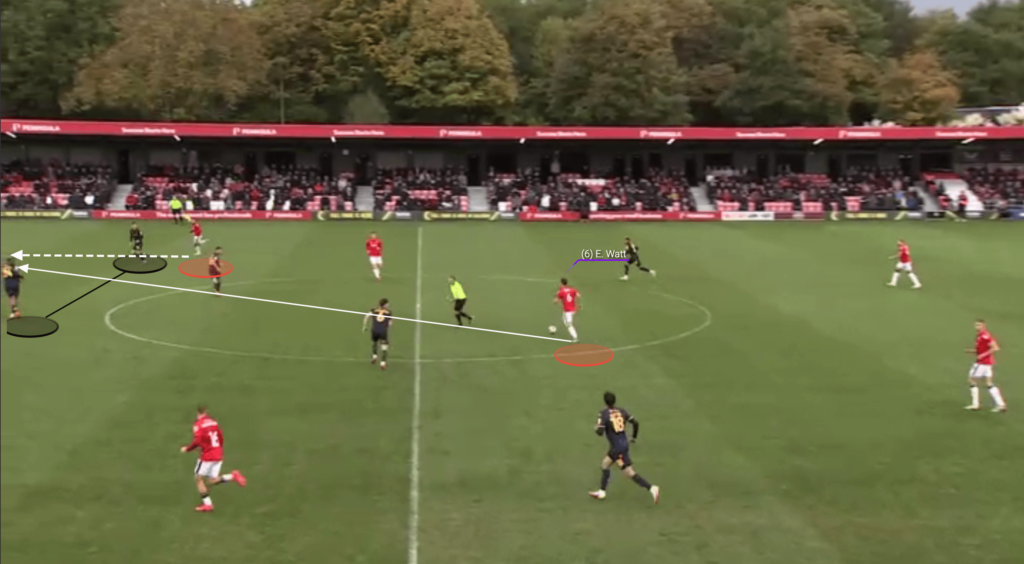 We see another example here of Watt’s ability to break the line with his passing range. This time he received the ball in a deeper area and drove forward in possession towards the halfway line. He is not put under any significant pressure and as such he has the time to pick out the pass that he wants. Leaving a player with the quality and passing range of Watt with this kind of time is extremely dangerous and as he steps towards the centre of the pitch and with opposition pressure coming to trigger a pass, we see Watt pick out the long through pass that breaks the defensive line and puts the far-side player through on goal.

As the ‘6’ in the Salford City system, we tend to see Elliot Watt take up intelligent positions against the ball. He screens the centre of the Salford defence and does not allow the opposition easy ball progression into the central areas. Salford have a tendency to play in a back three system but Watt still sits centrally ahead of that in a pocket of space that allows him to control the central spaces, this also helps him when it comes to pressing and engaging the ball carrier in central areas. 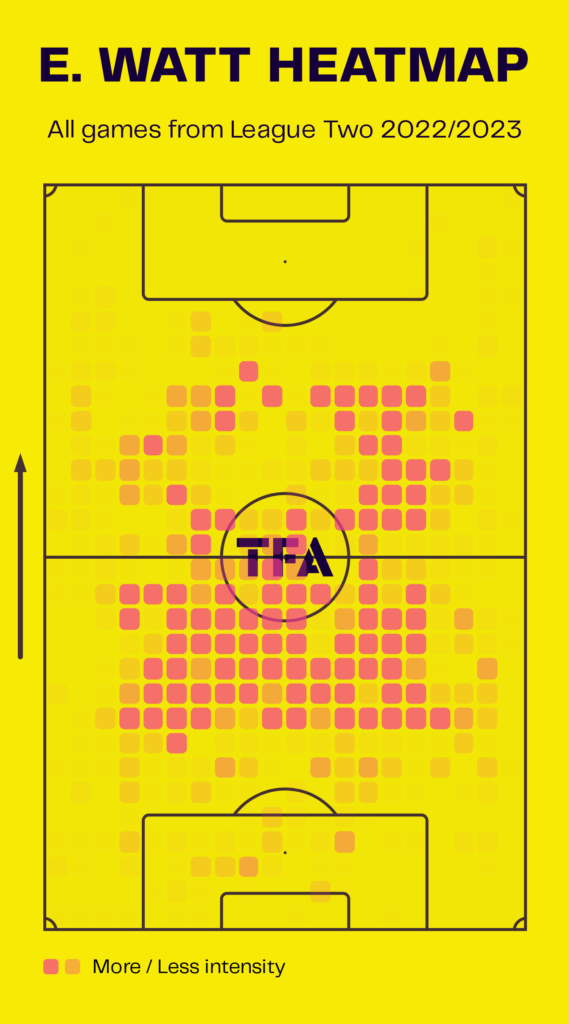 We can see from Watt’s heatmap from the 2022/23 season so far that he is not a midfielder who only sits in the central spaces but he does have a clear tendency to operate across the width of the penalty area. This means that he is constantly in a position to screen the defence and plug any potential holes. He does not, however, typically move outside to defend in the wide areas and as such, his other central midfielders will have to step out to cover for the wingbacks should they look for the opportunity to move high in the attacking phase. 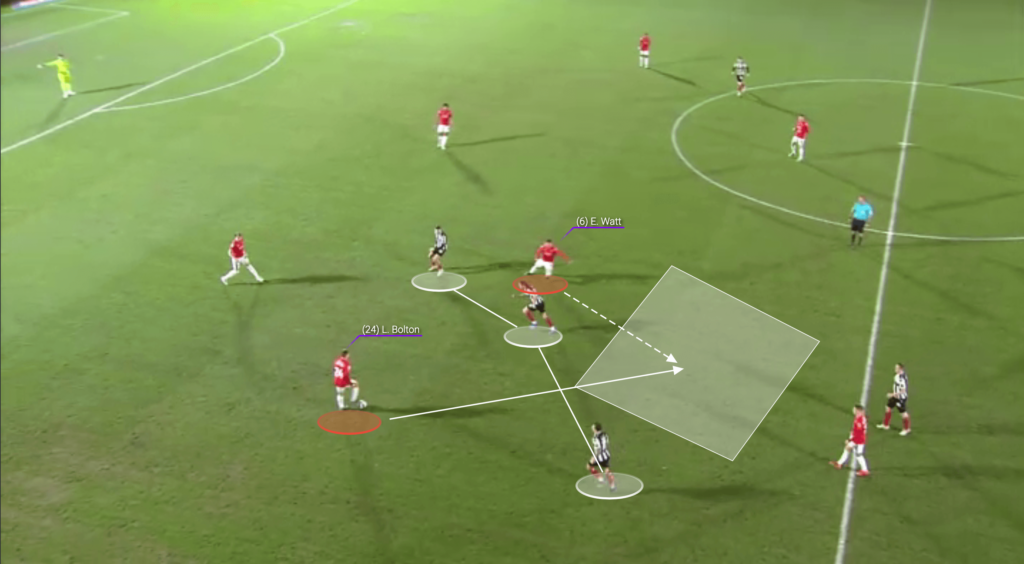 Watt is a very smart footballer who understands how to use angles and positioning in order to give himself and his teammates time and space to utilise the ball. He is very rarely stationary in the game and he will shift position constantly in order to give his teammate in possession options in terms of who they will pass to. We see an example of this here as Watt has initially regained possession through an interception before giving the ball out to Luke Bolton, the right wingback. As three players from the opposition look to press the ball, Watt makes an intelligent movement on their blind side in order to access the shaded area of space and allow Bolton to play the ball through the press. 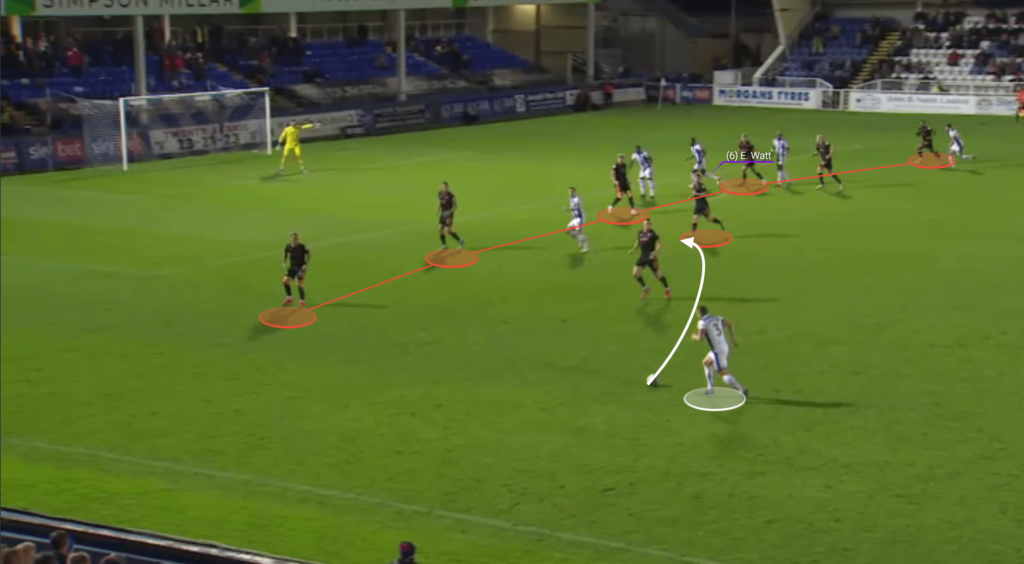 When positioned in front of the defensive line and in a deeper defensive block, he will typically form a compact defensive block. Crucially though, Watt will work and move to prevent the opposition from being able to access the space ahead of his central defenders in central areas. In this example, he is positioned ideally to intercept the cross from the wide area and as soon as he does regain possession, he is then quick to start the attacking transition for his team.

As you can see from this scout report, Elliot Watt is comfortably the best ball-progressing midfielder in League Two, and it’s not even close, his ability on the ball creates opportunities for teammates and allows Salford to move the ball into dangerous spaces around the final third. He is a player who can control the base of the midfield and break up opposition attacks before launching effective attacking transitions.

He is not the perfect central midfielder and there are been doubts previously about his athletic profile but in my opinion, the fact that Salford City were able to take him from a direct rival in Bradford City on a free transfer was a very smart piece of business in the market. If Salford do manage to gain promotion to League One 1, I would expect the former Liverpool and Blackburn Rovers player to have played a significant role in their managing to do so.