It was a crazy 2021 summer transfer window as Lionel Messi departed Barcelona, joining Paris Saint-Germain, and Manchester United finally snapped up Jadon Sancho and Raphaël Varane, while Manchester City got Jack Grealish. There were also a lot of managerial changes, especially in Serie A, where more than half of the teams started the season with new head coaches.

Although the team was often rotated because of tight fixtures, there were two undroppable players: Goalkeeper Anatoliy Trubin and Dodo, the unquestionable choice at right-back. Under De Zerbi’s tactics, the Brazilian has developed into one of the most well-rounded full-backs in Europe, and he became a different player within two months.

At Shakhtar, Dodô has a similar role to João Cancelo at City, since both are flexible with a good level of tactical understanding. This tactical analysis will address Dodô’s importance in De Zerbi’s system, as he is a crucial player in the development of attacks.

Construction of the attack

Under De Zerbi, Shakhtar are a team that emphasizes applying positional concepts such as pinning and manipulation, using short passes, and other tactics to move from one end to another. We had an analysis on the site to dissect their ways to construct the attack in July, and this piece will specifically be focusing on the roles of Dodô under different circumstances. 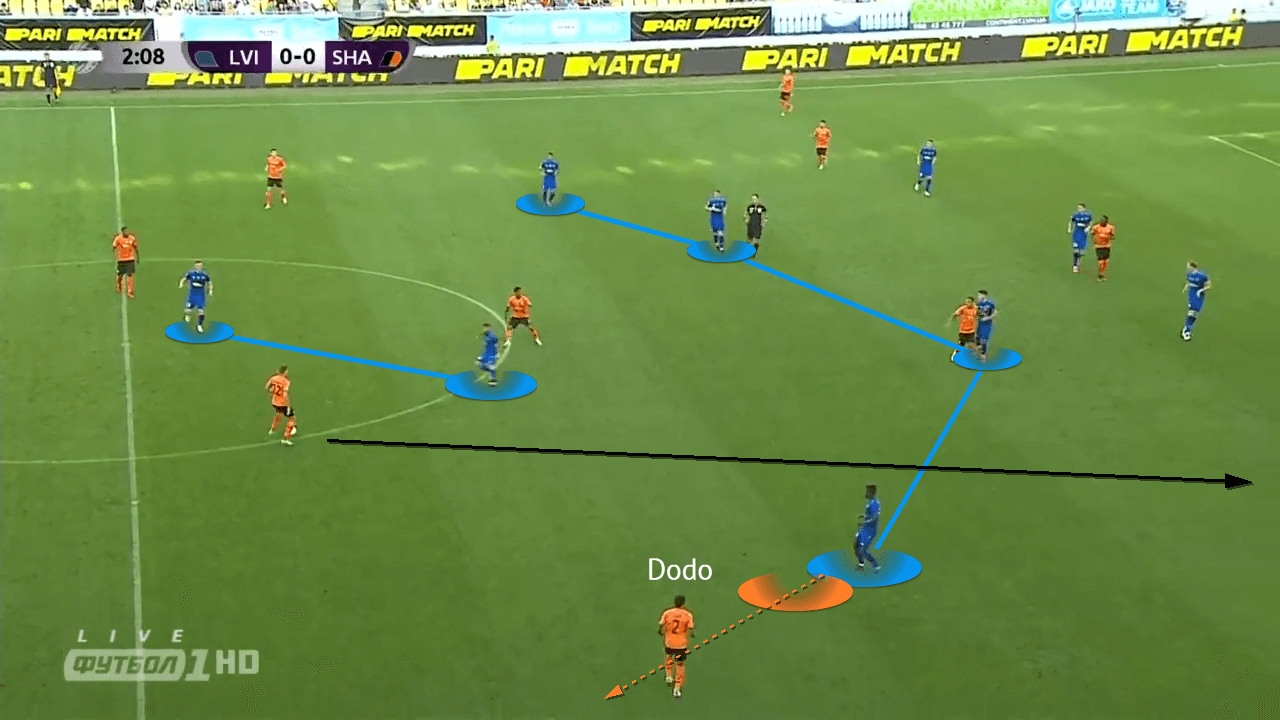 In this Shakhtar team, Dodô not only has to make on-pitch decisions with reference to spaces but also based on teammates and opposition. Since football is a dynamic game that changes very quickly from second to second, the Brazilian right-back must have good attention to detail and act accordingly.

Sometimes Dodô contributes to the team without even touching the ball. By using movements and positioning, he can manipulate the defence to open passing lanes. In the first scenario, when Dodô saw the teammate could face the opposition goal, he instantly jogged back from the half-space to wide. The movement drew the left-winger out, and now Shakhtar could break two lines by attacking the half-spaces channel. 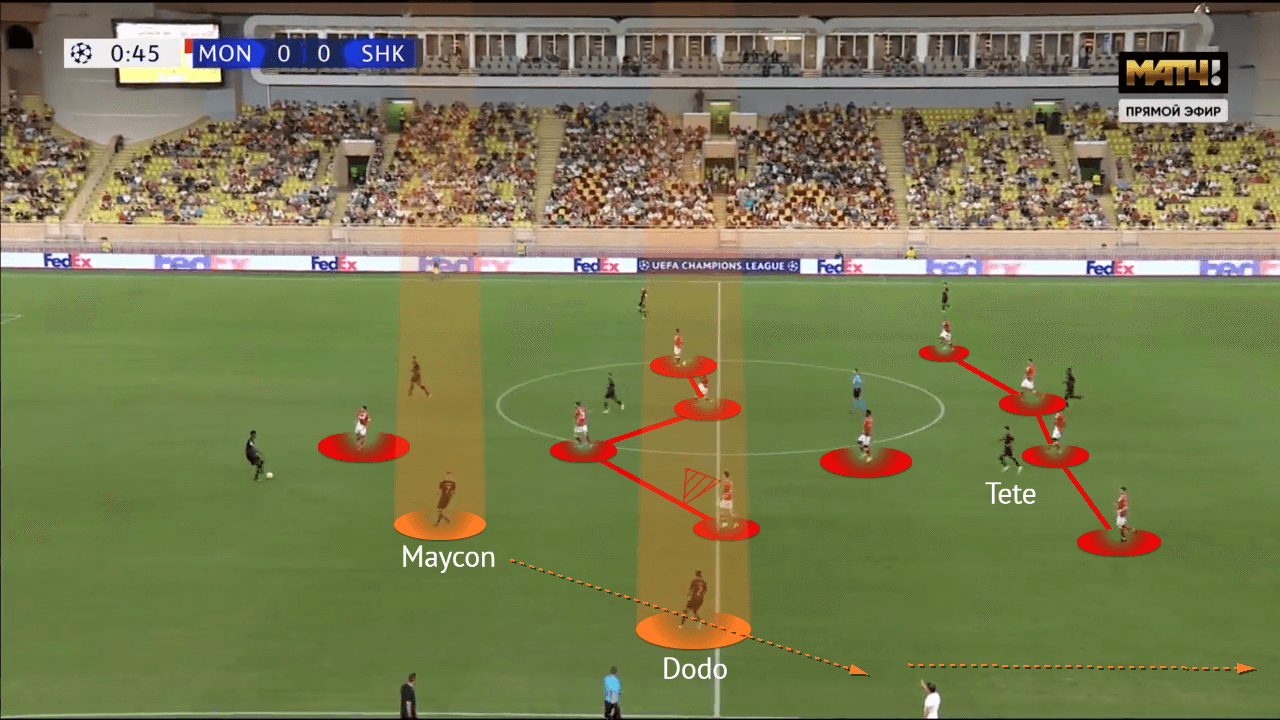 We could see an alternative scene in this image, in which Monaco’s left-winger had his eyes on the midfielder. So, when Dodô stayed outside of the opposition formation, he became the free player to receive from Maycon. Then, Shakhtar could go all the way, advancing into the final third.

At Shakhtar, players help each other to create greater spaces in attacks. In the second example, Tetê moved into the half-space to keep the left-back in the centre which vacated space for Dodô to exploit on the flanks. Later, we will also investigate some scenes where Dodô interacts with others. 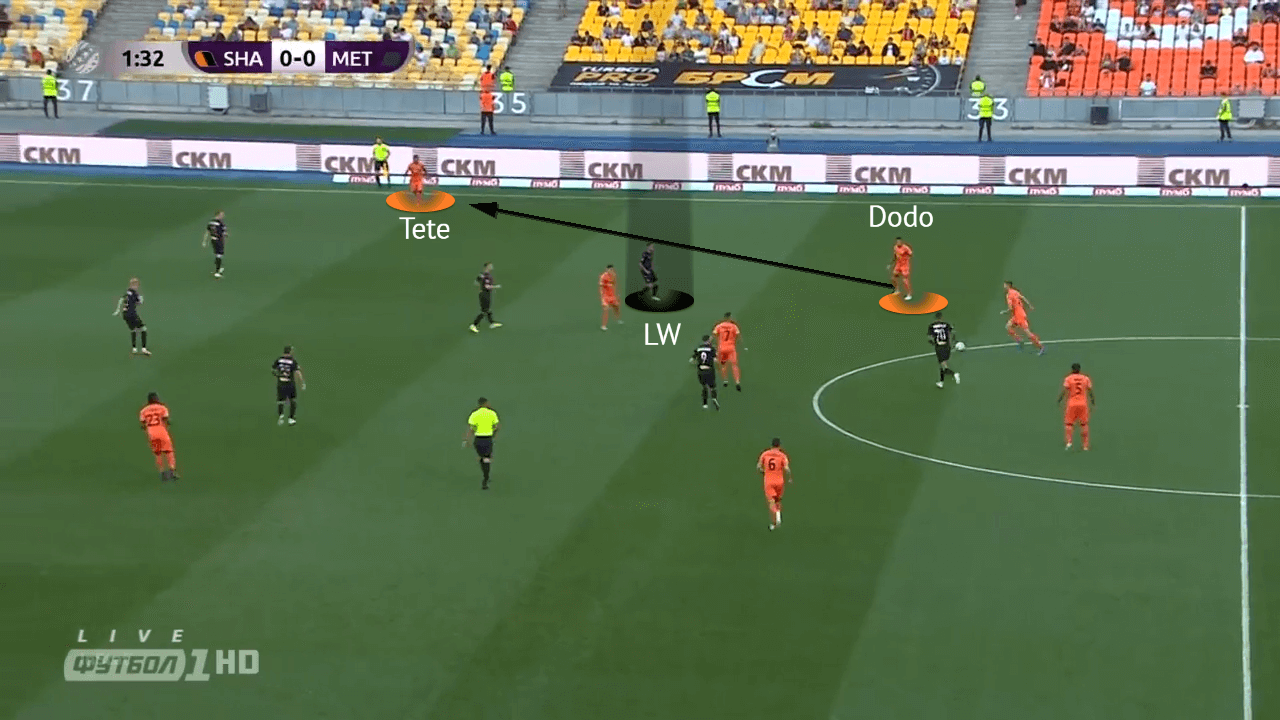 If Dodô received narrowly in the half-space, which mostly happened in a 2-3-2-3 formation, he could become the player to break the lines. In this image, you could see the positioning of Metalist’s left-winger, who was forced to stay in the centre to block Dodô’s vertical passing lane.

As a result, wide spaces were opened with a diagonal passing lane to Tetê. With a wide winger and Dodô playing in the centre, Shakhtar always stormed forward from these attacks. Then, the opposite-footed winger could attack the full-back diagonally from the flank. 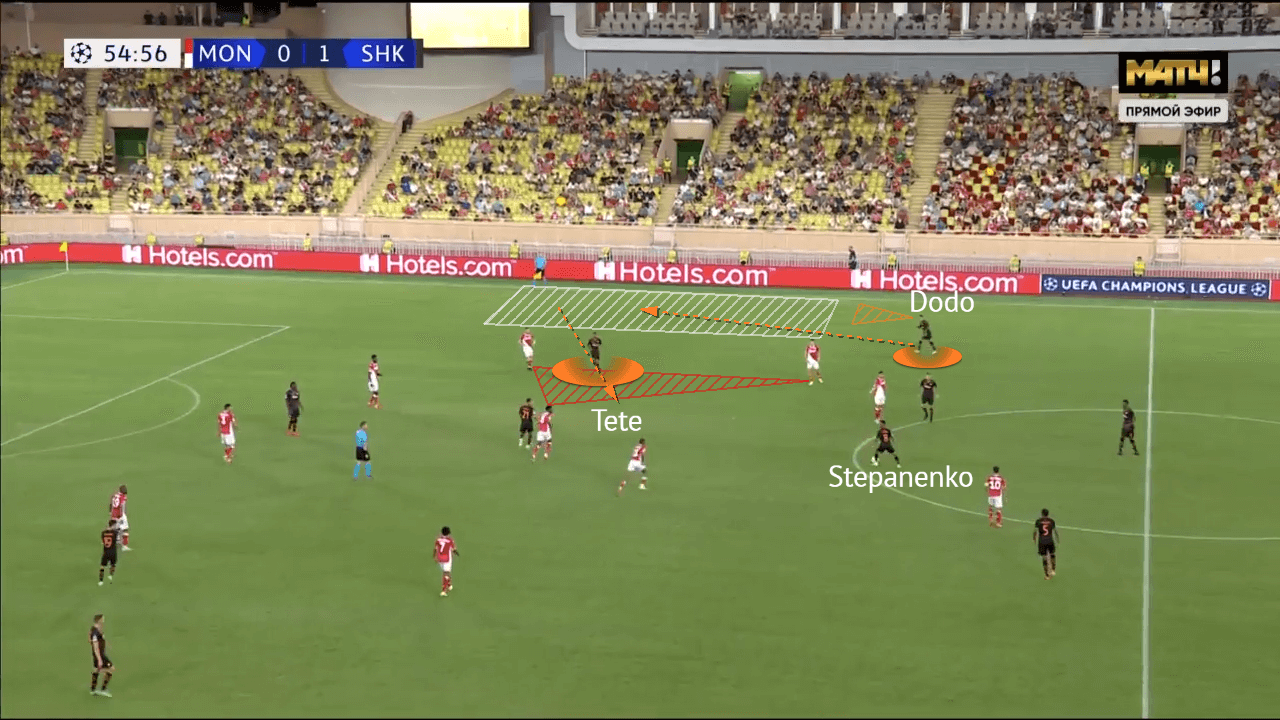 Nevertheless, inverting into the centre was not a dogmatic role. Dodô must cope with the complexity of the game and use the right space. In this example against Monaco, Tetê moved from the wing to the half-space to draw the left-back into the centre, then spaces occurred differently. In that case, Dodô must exploit wide spaces, which was the basic principle of De Zerbi: Only one player on the flank at a time.

But it was not that simple. The timing of Dodô’s run onto the flank was perfect. When Taras Stepanenko had the ball, Dodô held the run and stayed, as he knew an early movement would catch the opponents’ attention, killing zone white. Hence, he only accelerated when Tetê was going to receive (dragging players towards zone red), so he remained as a free player in the process. 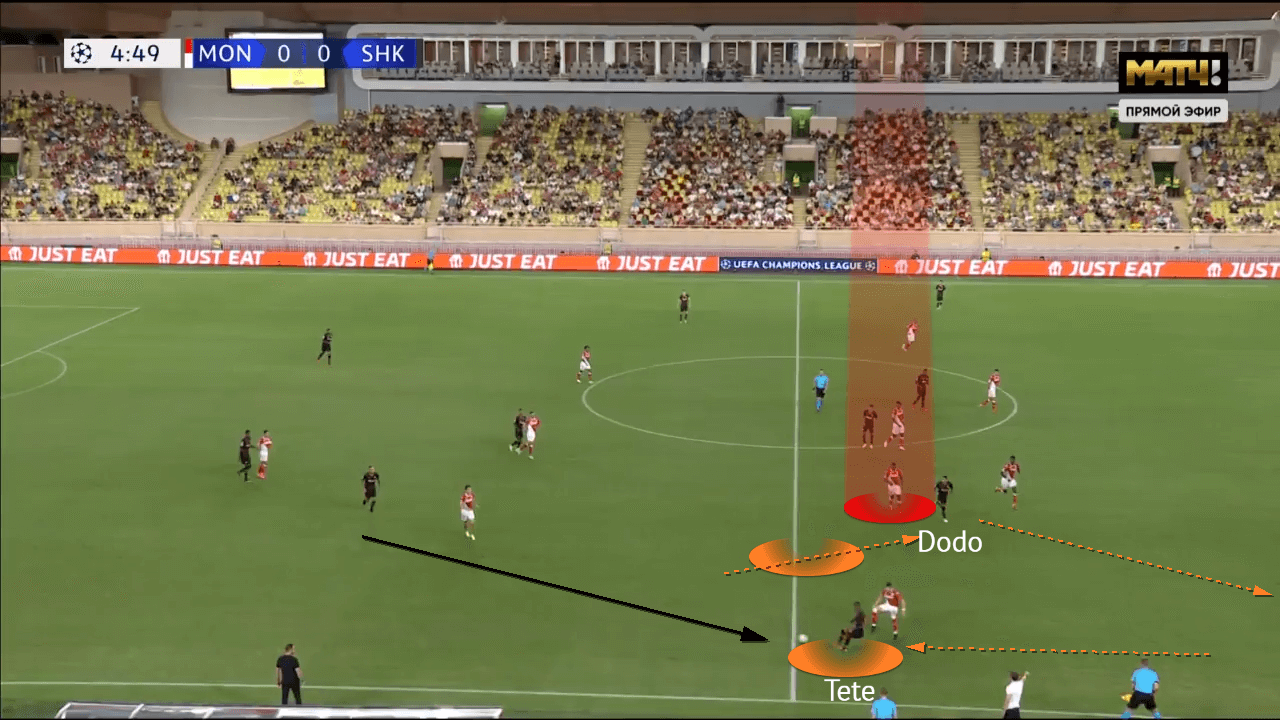 In the game, we could also see Tetê and Dodô interacting with each other in other ways. This time, the Brazilian right-back went into the half-space early and the movement drew the midfielder away from the flank.

Therefore, when Tetê received, he could access lateral spaces into the centre, which perfectly suited his stronger foot too.

Dodô has a good habit of continuously making the runs in the attacks. In this one, he immediately attacked space behind the left-back as Tetê pulled him out. When his teammates receive, he always adjusts his position to search for a better receiving angle or space. We will see more from this aspect in the next section. 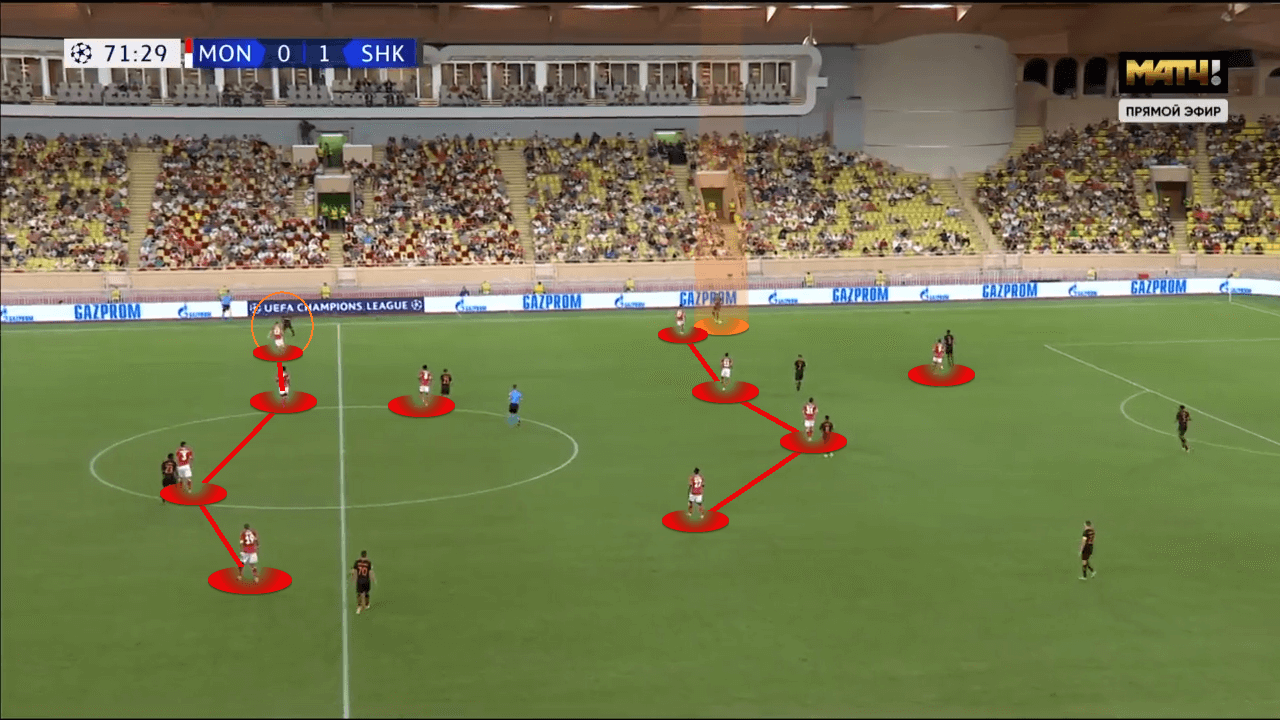 Under De Zerbi, Dodô has also learnt when to break the lines and when not to. He’s a clever player that became a crucial part of the construction of the attack. In the first instance, you could see Dodô had the ball on the right. As the Monaco winger pressed diagonally from the centre, there was an angle to play a vertical pass down the flank.

However, Dodô did not make that pass as he knew Monaco attached the left-back tightly to Tetê. Although the vertical pass from right-back to winger was progressive, the attack could hardly continue as there was no room to receive. Therefore, he chose not to break lines. 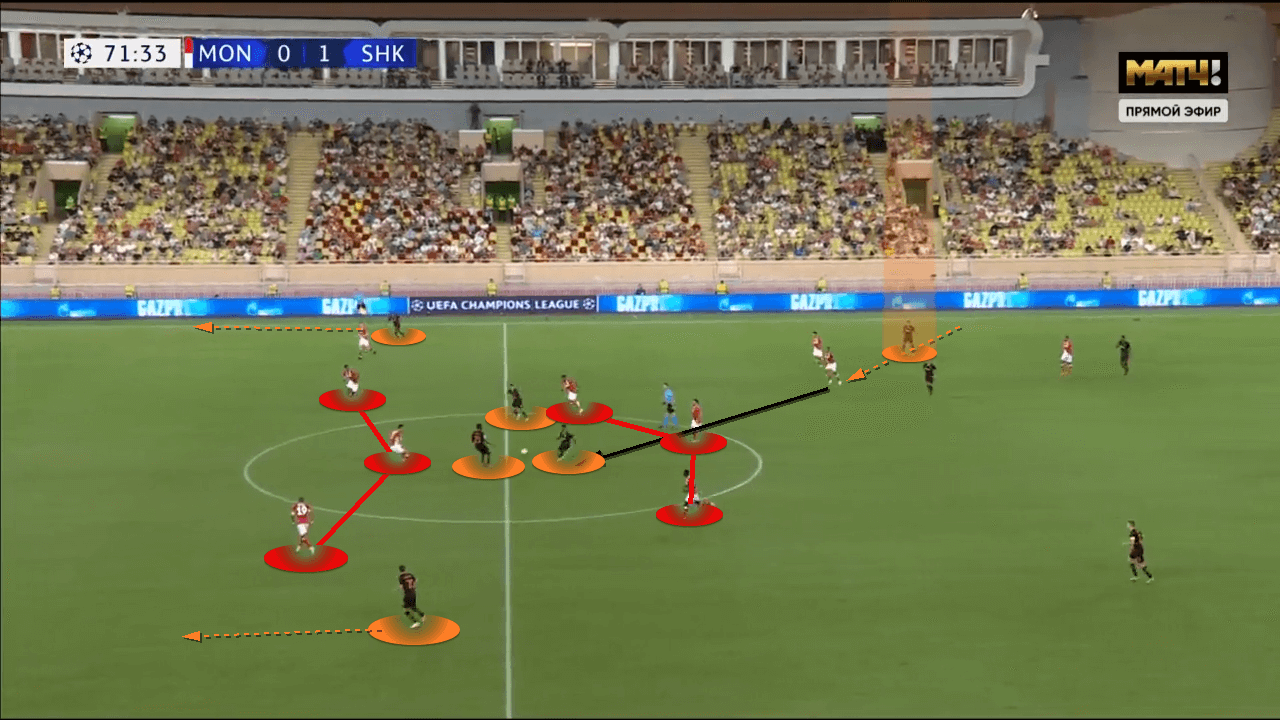 Dodô chose to dribble diagonally into the opposite direction of the left-winger’s press, then hit the ball into the space behind the midfield. As indicated in the last image of the section, it was a better decision as Shakhtar attacked in good conditions without being trapped on the flank.

Now, in the centre, Shakhtar had three players behind Monaco’s midfield, and both wingers running forward on the flanks.

Although Dodô often inverted himself into the half-spaces in the second phase, he would not stay deep all the time. The Brazilian right-back was energetic and physical to make runs in the final third, which aimed to create dynamics and options for the winger to play. 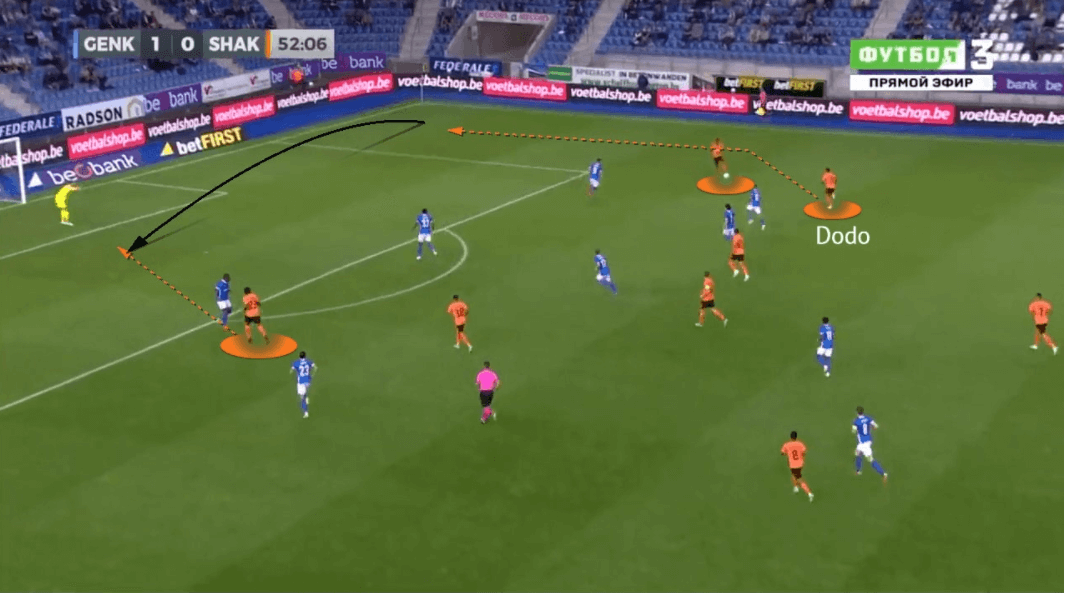 In the first example against Genk, when Tetê received and faced the defender diagonally, Dodô made an overlapping run into zone 18. So, he offered a passing option at the byline and a crossing opportunity for the striker to attack the box. The running path would be a perfect match for Tetê’s left foot. 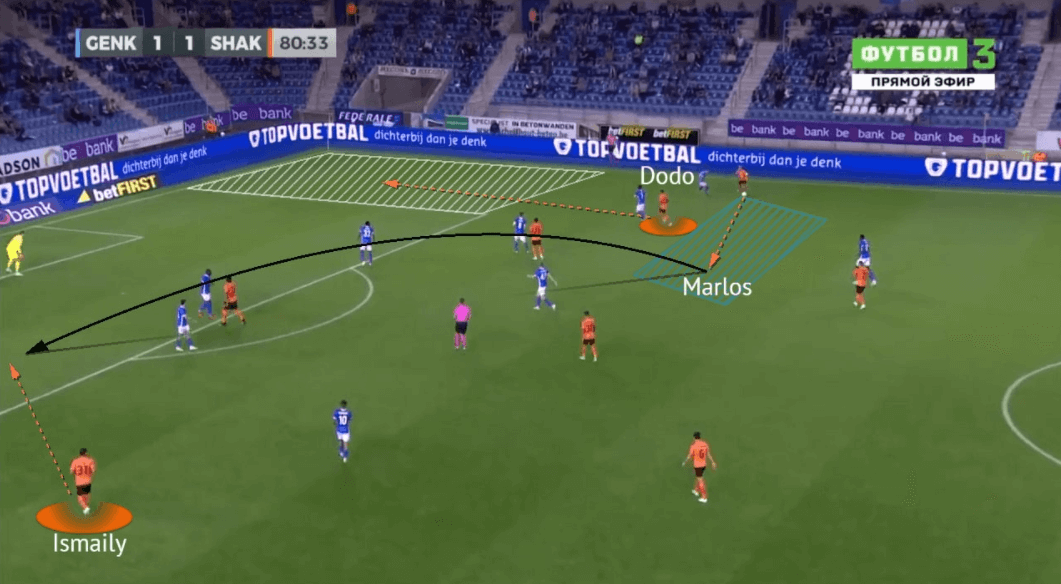 However, for the winning goal of the game, we saw Dodô making the same run into the white zone, but with a different outcome. The release pass from the winger was not possible as the defender already blocked that angle, but the run was still very useful as the blue spaces were vacated to play. So, the 33-year-old Marlos could send a diagonal into the box. From the opposite side, Ismaily will be arriving in the penalty zone to meet the delivery.

In these two examples, you could see that the runs of Dodô were crucial to the final passes of the attack. He would either offer a release option or create spaces for the opposite-footed winger to dribble into diagonally. 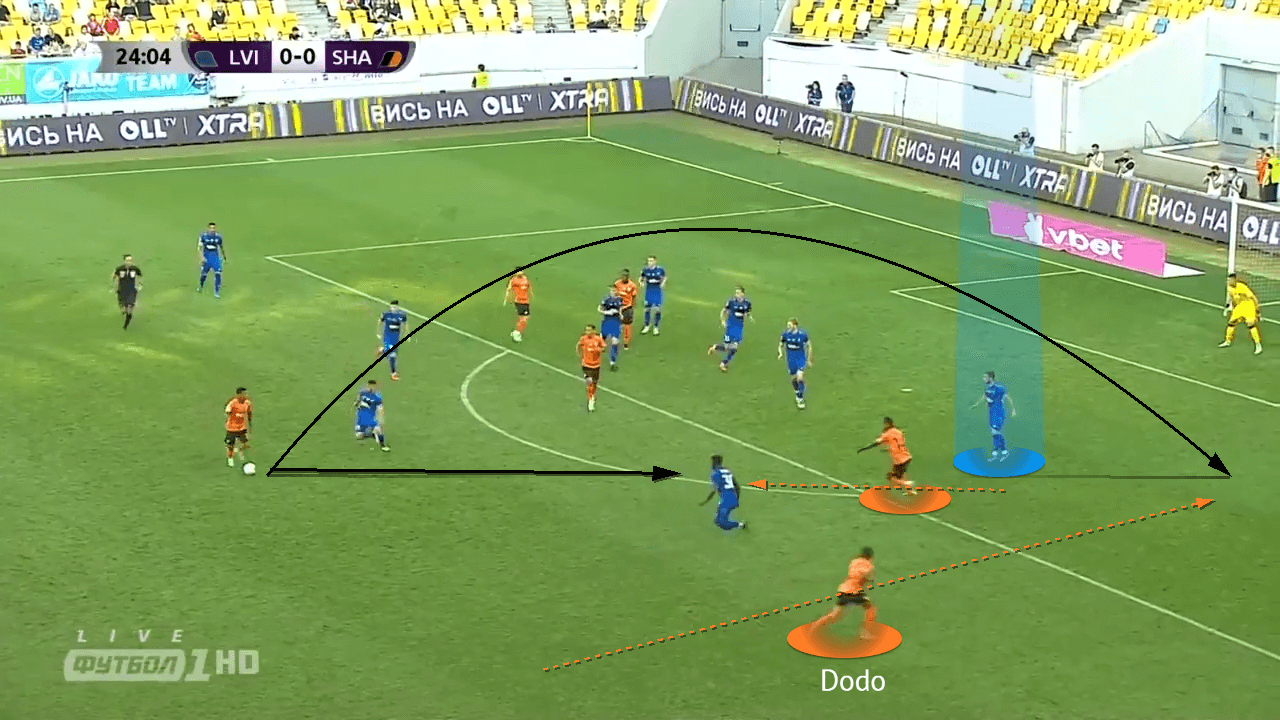 Concepts applied in the second phase could also be applied in the final third. This one was the overloading on the left-back. In this situation against Lviv, Dodô saw Tetê’s movement into the centre, so he made a run outside of the formation to offer an option behind. With this simple movement, the left-back was placed in a decisional dilemma: should he stay tight on Tetê or track Dodô? No matter which option was chosen, one of the highlighted Shakhtar players would be free. They could simply counter-act on the left-back’s decision. 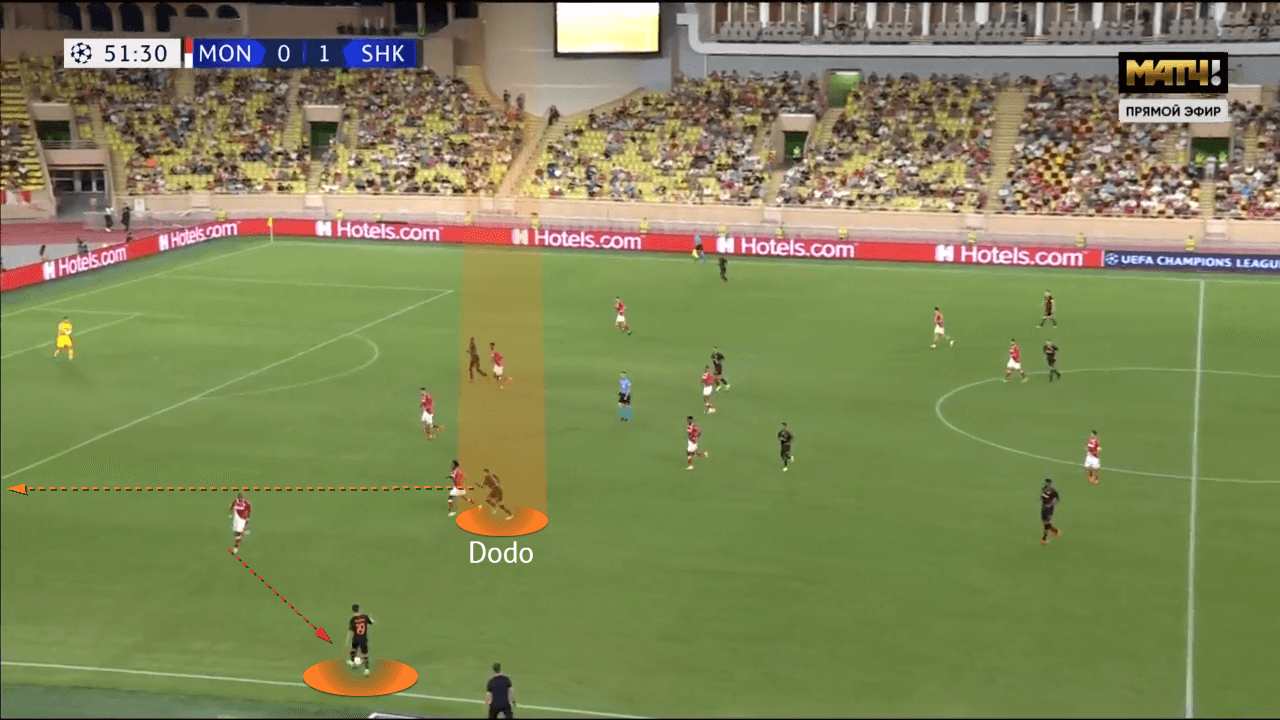 Even on the left side, we could see Dodô using a similar movement to create an additional option for the left-winger. He always ran through the half-spaces channel to reach spaces behind the defence, and this often drew the defender away.

Again, there were at least two progressive options created by Dodô’s run. Manor Solomon could either release Dodô or dribble inside for a wider passing angle diagonally as half-spaces were vacated. 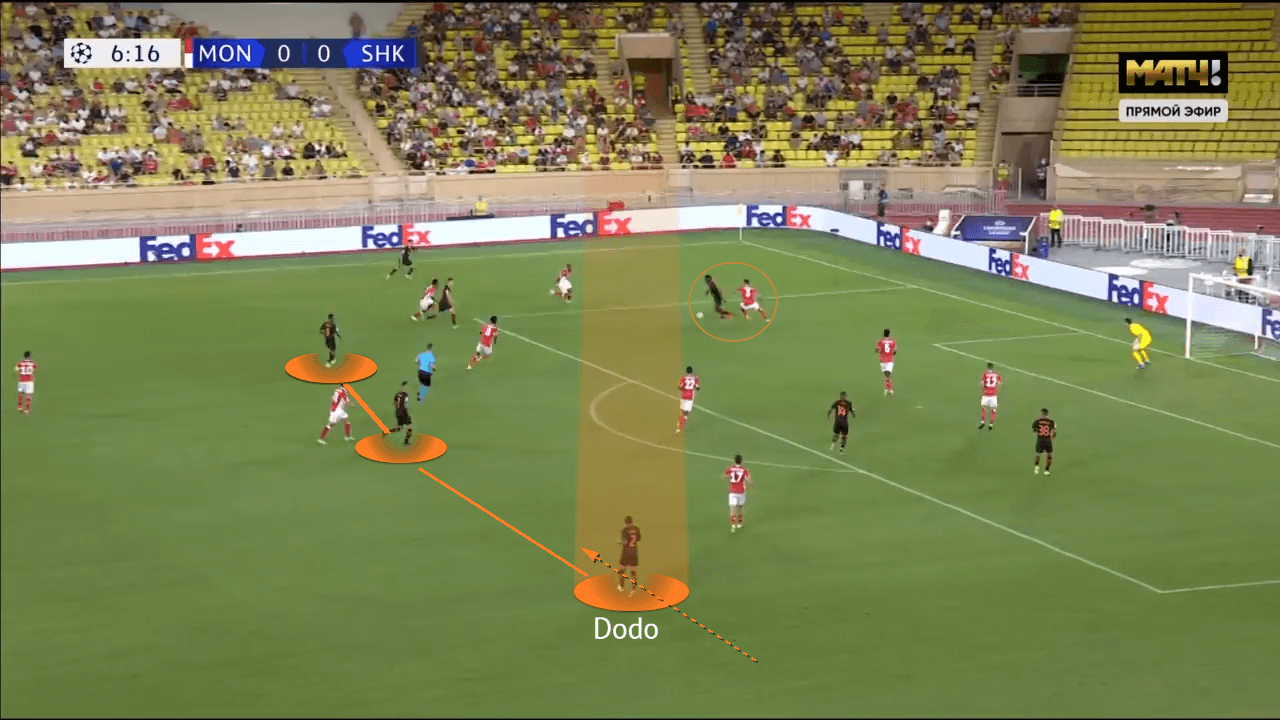 Dodô’s role is not only about making runs to create dynamics in the final third. When the attack was developing on the other side, he should balance the shape against the rest defence to dominate central spaces. In the last image, Dodô moved into the centre instead of occupying the touchline as the attack came from the other flank. His positioning maintained a compact Shakhtar shape and the team were not exposed in transition even if the ball was lost.

The scout report demonstrates Dodô’s tactical flexibility in different parts of the game. He grasped the principles of De Zerbi very well. The 22-year-old right-back is extremely good at making functional movements, purposefully opening spaces, passing lanes, and options for teammates. Those are valuable attributes to the team as they add dynamics to the offensive organization.

If he can stay healthy and fit to play regularly, this season will be his breakthrough season and bigger clubs in Europe will go for him.