Three games in, 57 shots, and three losses, Wolves have had themselves a dubious start to the Premier League campaign. Manchester United have been far from perfect in the opening exchanges of this season as well, and it showed in this match too. This tactical analysis will take a look at the tactics of both sides and how it ended up in three points for United. 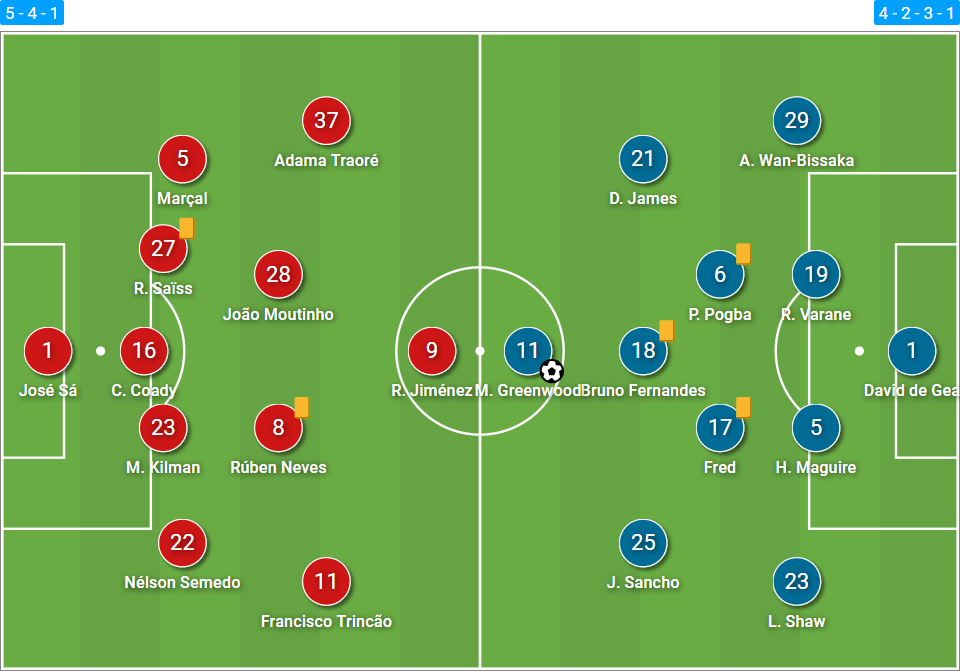 Bruno Lage, after a midweek league cup fixture versus Nottingham Forest, chose the same starting XI that went up against Spurs in the last EPL fixture. The two notable long-term injuries are Pedro Neto and Jonny Otto, with Neto expected back in February, and Jonny around the same time. For now, Marçal is a capable deputy, but Neto is a player that Wolves are missing desperately. His linkup with Jiménez early last campaign won their side points alone.

Ole Gunnar Solskjær, on the other hand, had a few changes to make, with players coming up to fitness to make their full debuts. Varane replaced Victor Lindelöf for his first appearance in a United shirt, while Pogba moved deeper from left-wing to join a double-pivot with Fred, replacing Nemanja Matić. Further up the field, Sancho made his first start for United on the left-wing, whilst Anthony Martial’s dreadful display against Southampton saw him replaced by Greenwood up front, making space for a surprise Dan James on the right flank.

United continue to struggle with counter-attacks

One factor that is well known about Solskjær’s United teams is that they struggle to break down low blocks and regularly struggle on the counter against these teams. For example, last season, both West Brom and Sheffield United took a combined four points off of the Red Devils, and even against Brighton early doors last season saw United earn all three points, but it was thoroughly undeserved. It is recognised as United’s biggest weakness – it has been for some time – but Solskjær seemingly has no solutions to their presiding issue.

This match against Wolves was slightly different, to be completely transparent. Lage is not the type of manager to set up team’s playing too deep, but he did set up his side carefully to battle against the pace in behind on the flanks via the likes of James and Sancho. With Pogba playing deeper, that famed ball over the top was going to be played, but Wolves were keen on it in this match. They did recover possession in their half and attack with pace via their own pacey wingers. 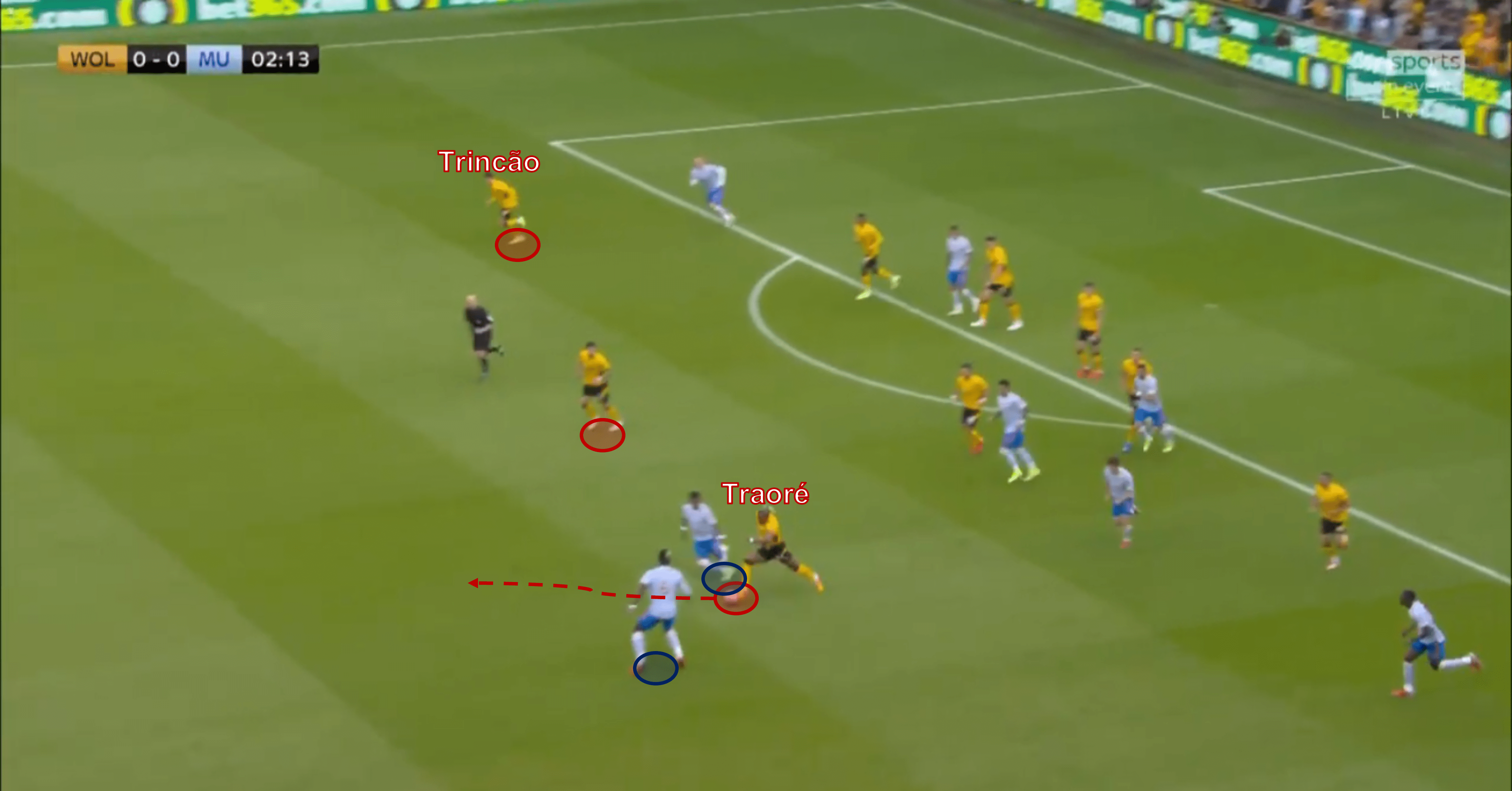 Traoré takes the ball past two opponents here and carries it into the final third. 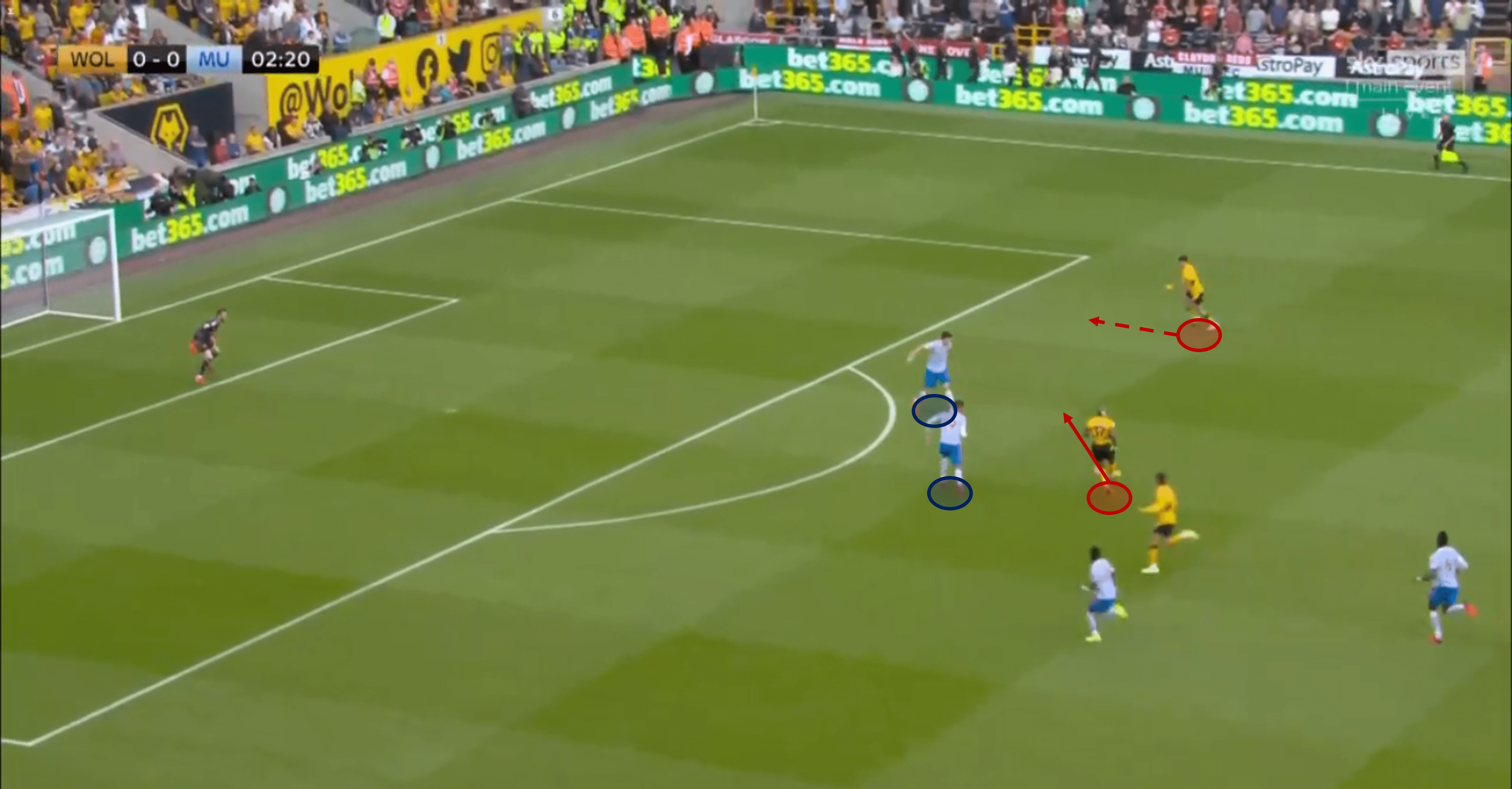 He lays off the ball for Trincão, whose shot ends up coming from an awkward angle – too wide to score.

Traoré and Trincão both did a great job of dropping back to help out defensively and position themselves in the right places to hit United on the counter in the attacking transition. They both demonstrated their fantastic ball-carrying abilities to help their team up the pitch and into the final third. Their positioning on the counter was vital to Lage’s tactics, but they also did well in longer spells of possession later on in the match.

Traoré’s eight dribbles in the game were of course the most of anyone on the pitch, and Trincão’s three was second to the Spaniard. If Lage’s side is to be successful this season, they will be relying on these winger’s abilities to go past a player consistently. Trincão, the young Portuguese on loan from Barcelona deserved to score Wolves’ first goal if it were not for a fantastic goal-line clearance by Wan-Bissaka. 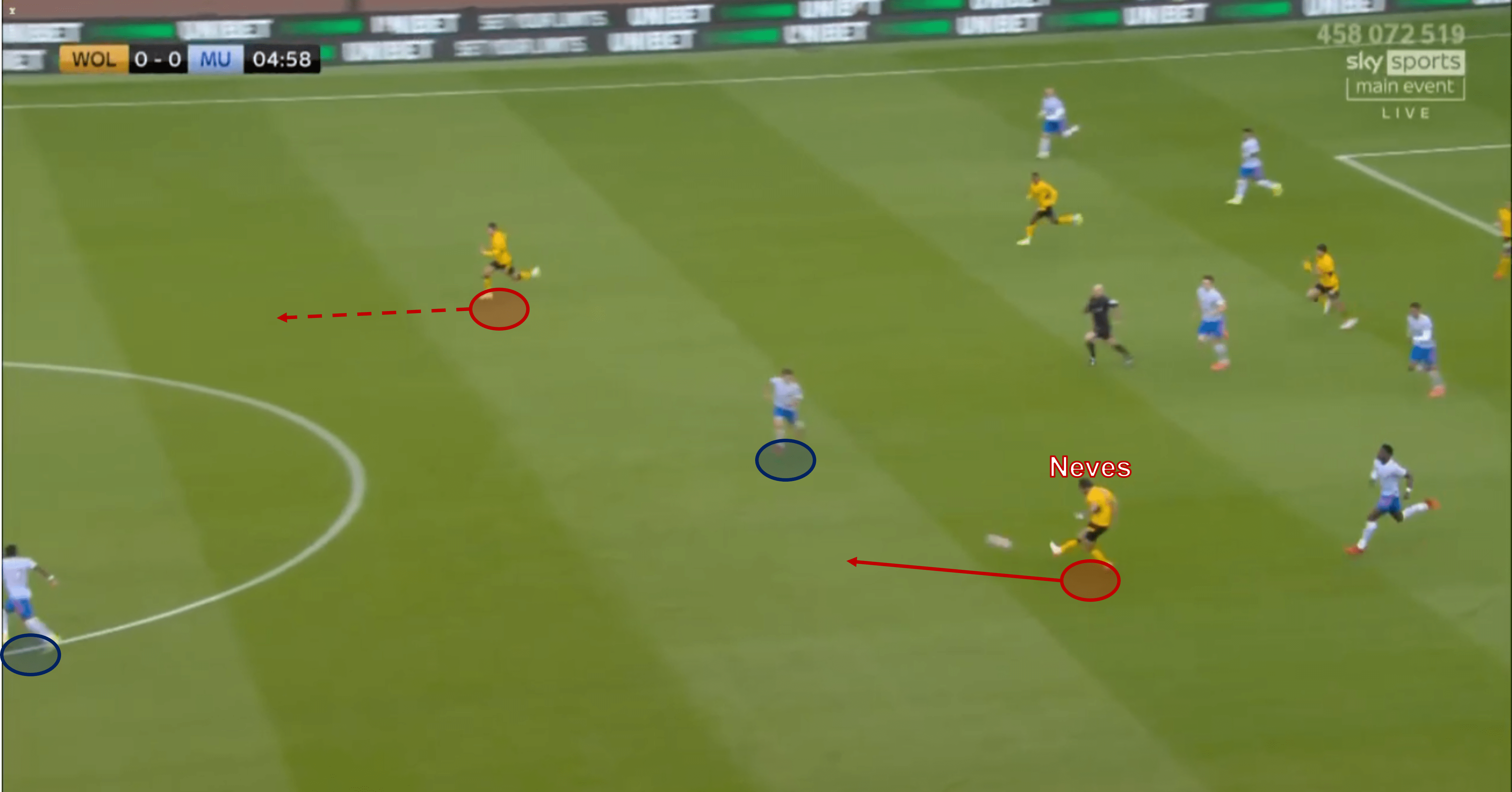 Neves here picks up the ball and plays it directly into a forward, but the pass is intercepted and deflected into the path of another attacker. 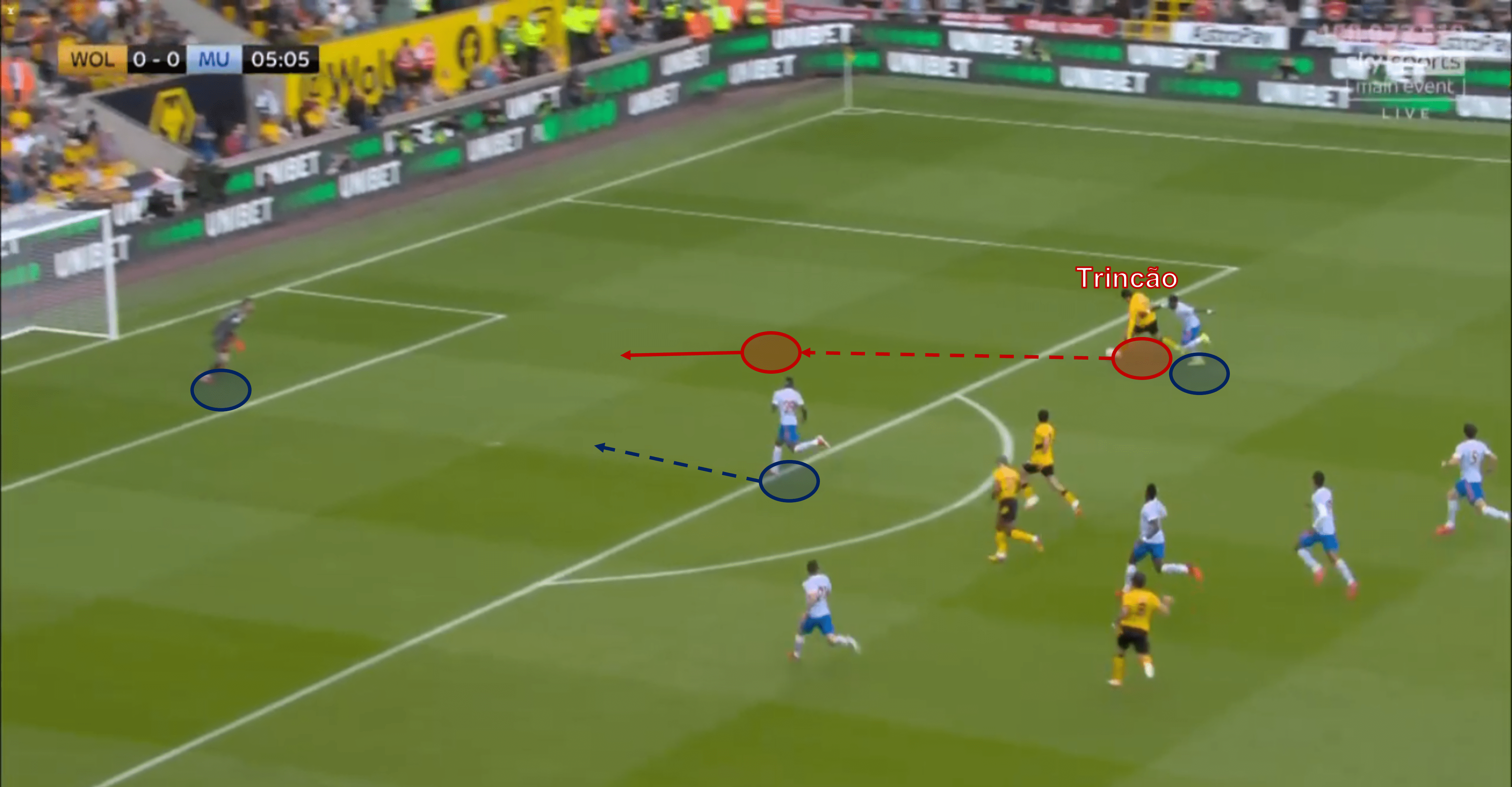 Trincão pulls of a brilliant piece of individual skill to get past the defender, and he calmly puts the ball past de Gea – but Wan Bissaka gets there first.

What we saw in this example above was Neves’ ability to pick out a long-range pass on the counter too. He and Moutinho will also be expected to contribute to Wolves’ ability to hit teams on the transition at pace with their passing range. The positive of their attacking unit at the moment is that they can decide to go in behind through the pace of their wingers or go slightly more directly into the feet or onto the head of 6’2” Jiménez. Variety.

For all of their quality in generating goalscoring opportunities – none of their forwards could take them. Different xG models will rate the match slightly differently, but somewhere in the range of 2.1 xG was what Wolves managed in this match, but of course, no goals. As mentioned before, they were slightly unlucky not to score via Trincão, but other chances that they created resulted in some very poor finishing. 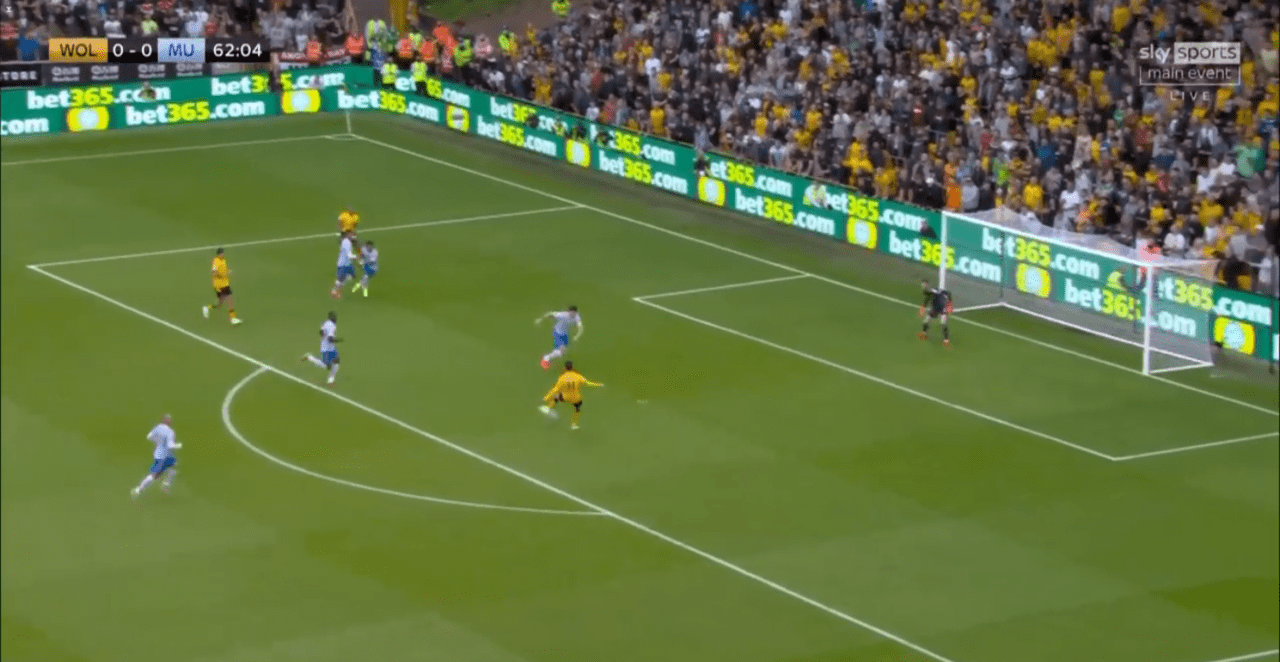 Trincão gets the balls here and scuffs his chance, mishitting the ball.

They were not only creating chances on the counter as well. Wolves managed to keep possession for sustained periods when creating goalscoring opportunities, not something often seen under Nuno in the last three Premier League campaigns. Over the course of the ninety minutes, they still managed just 44% possession, but this was to be expected against a United team with the ball-playing quality they have.

Their unfortunate finishing was none the clearer to see in the 69th minute from a corner played in, with Saïss’ doubleheader being saved by a fantastic couple of saves in quick succession by de Gea. It was reminiscent of a 2018 de Gea who consistently produced quick reflexes of this magnitude. For Wolves, it was a wretched return to form when they needed it least. 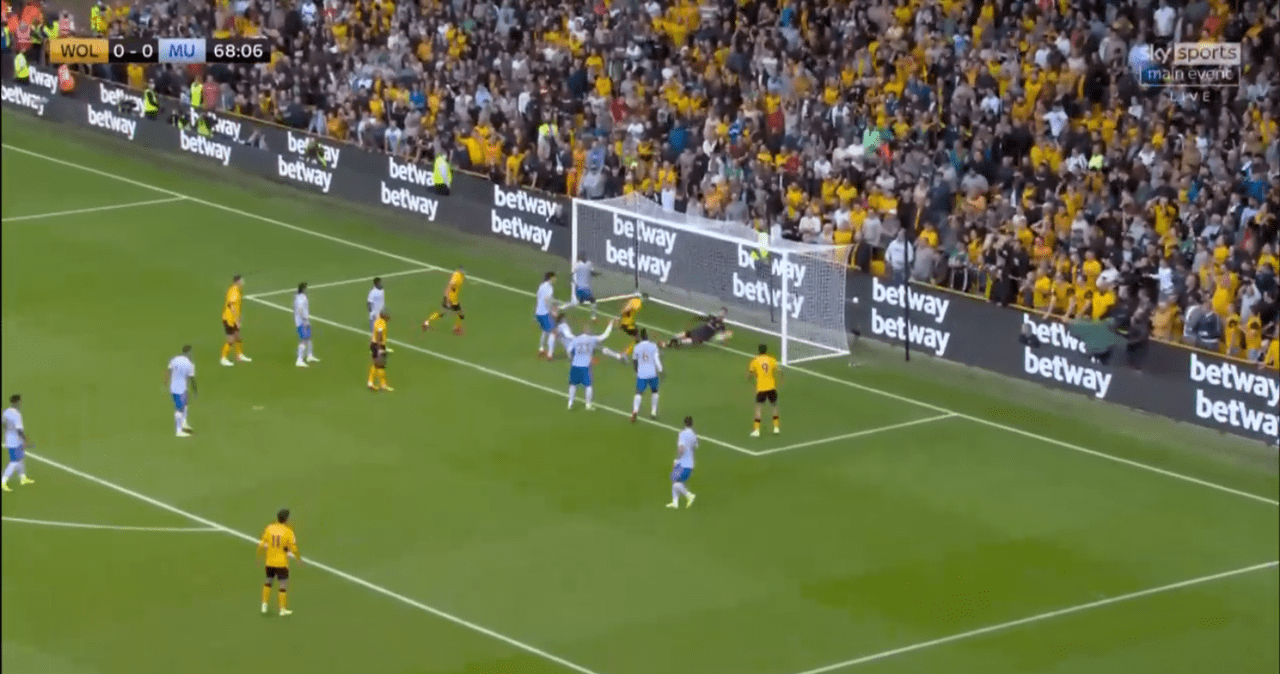 Again, Saïss gets a cracking opportunity to score, but de Gea saves brilliantly.

United, for the most part, were restricted to long-range efforts. Fernandes early on in the match let one fly from range, hitting the advertising boards, nowhere near the bottom corner. That was in the 7th minute, and United’s next opportunity would come in the 45th minute – a desperate representation of United’s struggles to get going in this match, as is the case in most of their matches, but it was especially the case here.

In the second half, things improved to an extent. Fernandes had been threatening the Wolves backline with his runs in behind but was yet to be met by either of the centre-backs or Pogba in midfield. In the 57th minute, however, Pogba finally spotted Fernandes run in behind, and the Frenchman had the quality to meet him. It is a weapon that Pogba can utilise deeper on the pitch, and although his favoured position might not be as part of that double pivot, he can be useful there in an attacking sense. 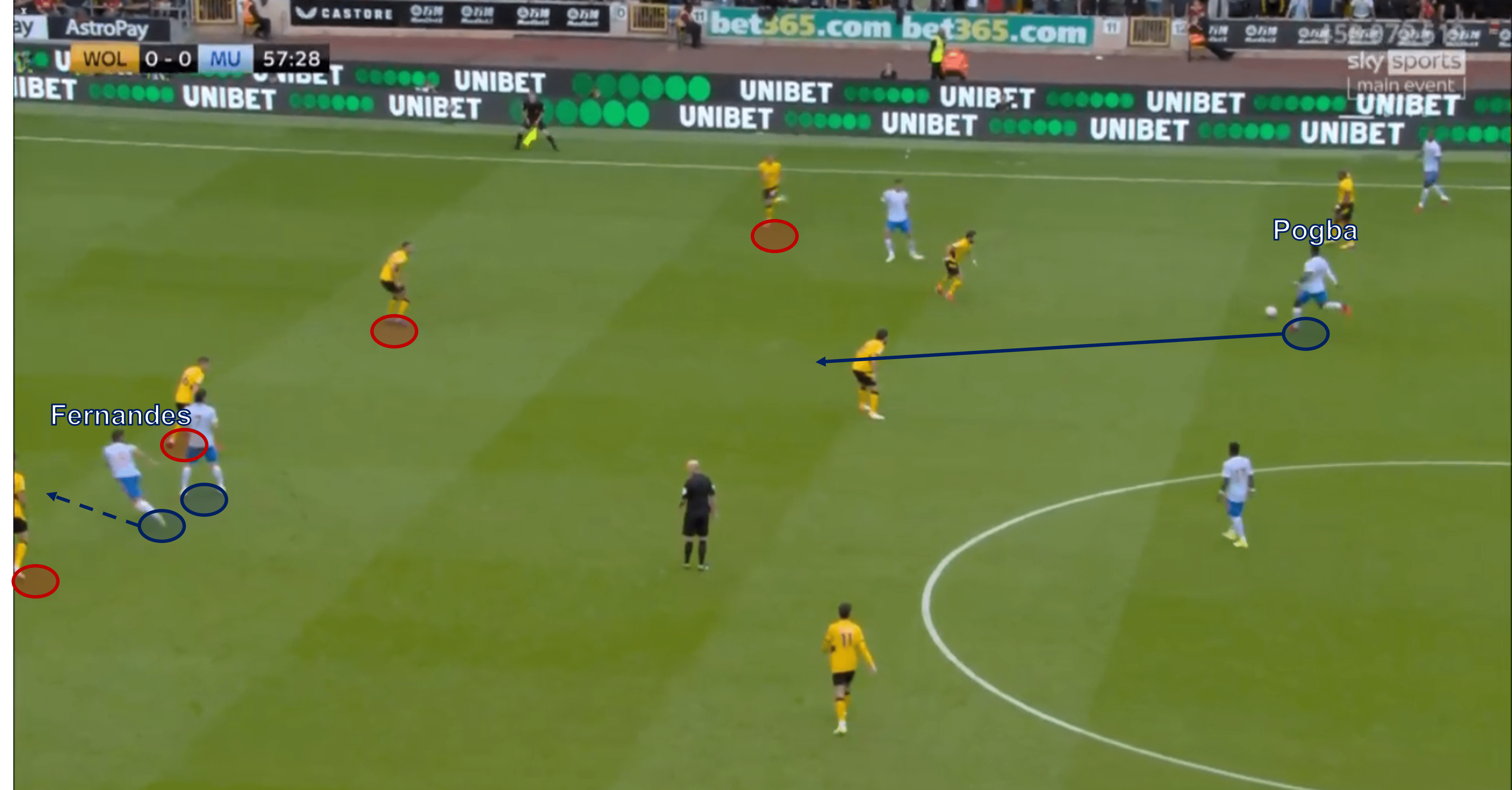 Pogba receives the ball in midfield and plays the nicely weighted ball over the top for Fernandes. 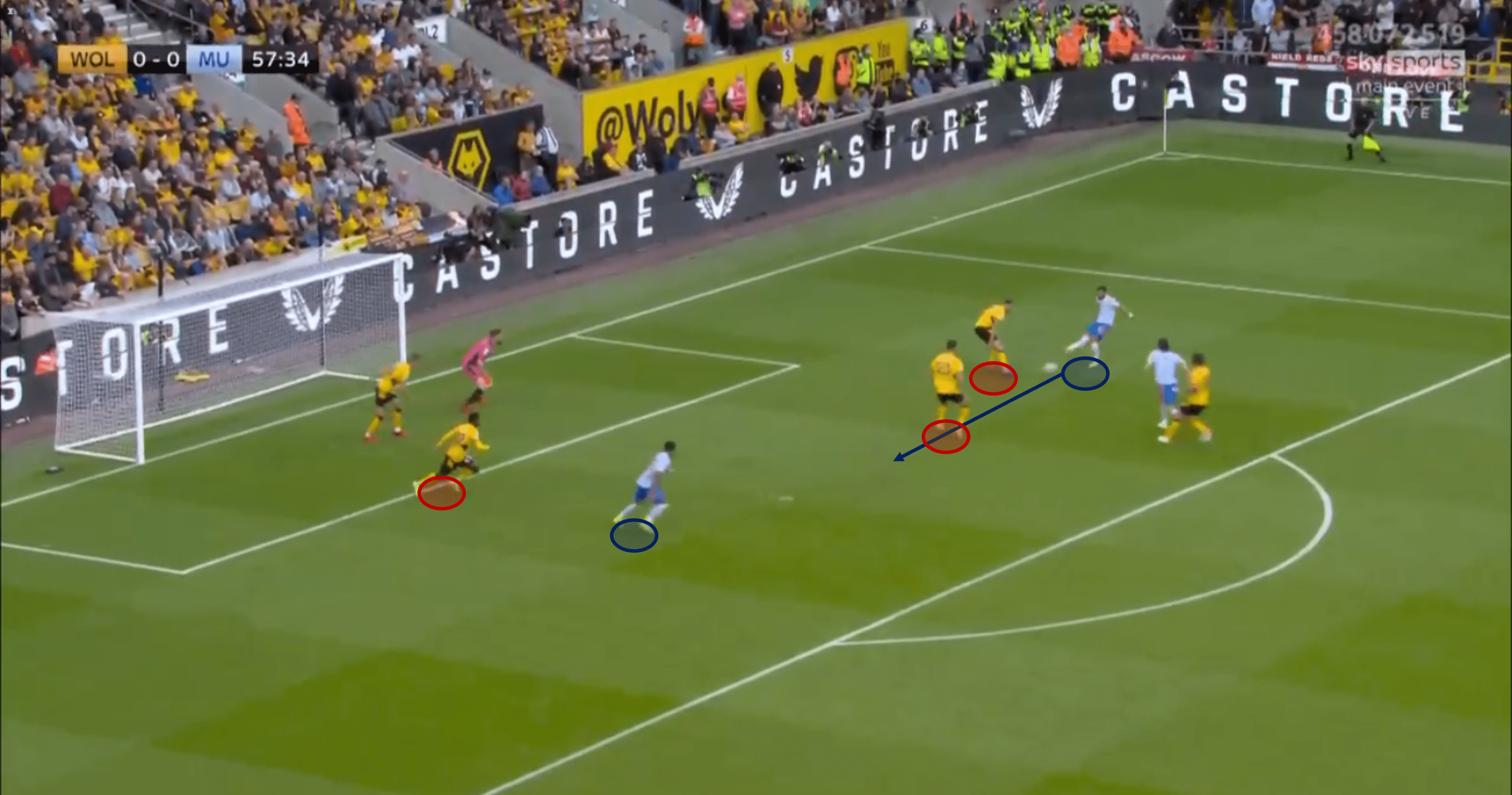 Fernandes pulls it back here for Greenwood, but the chance is scuffed.

However, United’s only goal, of course, came from their teenage star, Mason Greenwood. He had one of lowest rated chances on xG, ~0.05, and there was a hint of fortune in the shot (potentially an intended cross) going in the back of the net off of goalkeeper Sá, but Greenwood hit the ball with such power that the Portuguese was hapless to stop it. After this point, United essentially dictated the play and allowed no chances at either end. 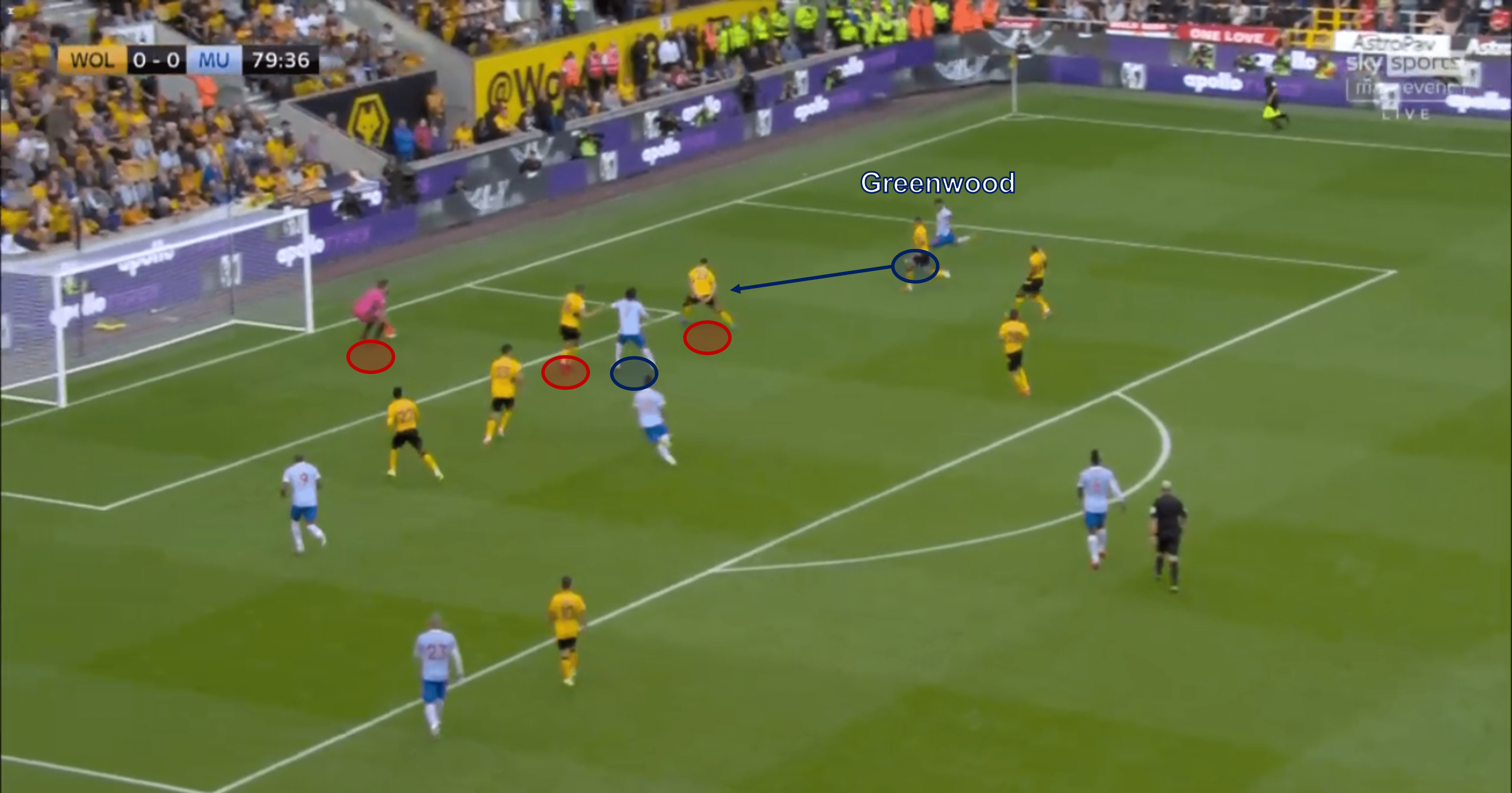 Greenwood hits the ball practically at the keeper, and it coarses into the net.

Upon the game’s conclusion, xG had the fixture at 2.1–0.7 in Wolves’ favour. On another day, Wolves would clamour all three points, but on this day, what really happened was a mixture of misfortune and outright poor finishing. They created a higher volume and higher value of chances to United, on the counter, during longer periods of possession, down the flanks, direct balls down the centre, they had a variety of attacks going for them.

So, should United be worried? Perhaps slightly. It’s early on in the season, sure, but after a disturbed start to the 20/21 campaign, they had a full pre-season this time. Okay, not every player participated, and new signings have taken a little bit of time to embed in the team, but their issues in midfield will seemingly not be fixed with the arrival of Cristiano Ronaldo on some stonking wages. United fans can expect to see Fred, Matić, and McTominay accrue plenty of minutes across the campaign, and that could be cause for concern on its own.