Shakhtar Donetsk faced Genk in the third round of UEFA Champions League Qualifying 2021/22 – they were one-nil down in the first half but came back within 20 minutes. Tetê and Alan Patrick contributed to the goals that led to the triumph.

Tactically, the game was an interesting one as Roberto De Zerbi’s team played a good match in the way required by the Italian coach. The playing style of this Shakthar has shown similarities to Pep Guardiola’s Bayern Munich or Manchester City, and the flexibility of several players were impressive too. This tactical analysis will give a detailed look at De Zerbi’s tactics to dominate the half-spaces away from home.

Genk lined up in a 4-2-3-1 formation with only two changes after the loss to KV Oostende during the weekend. Mark McKenzie and Angelo Preciado were replaced by Jhon Lucumí and Daniel Muñoz in the defence.

Shakhtar also had some changes after testing different players in the first two league games. Taras Stepanenko stepped down to the bench as Maycon partnered Marcos Antônio in the midfield. Another notable change was the defenders – Marlon moved to the left centre-back, Vitão made his first start of the season while Mykola Matviyenko was played left-back. Both Ismaily and Viktor Kornienko started on the bench.

Although Wyscout generated Shakthar’s formation in a 4-4-2 shape, it developed some variants as we also saw they played in a 4-2-3-1 or even a 2-3-2-3 in possession. De Zerbi temporarily abandoned his 3-1-2-4 that was deployed against Lviv and Inhulets in the league as they used Dodô flexibly in the first and second phases. 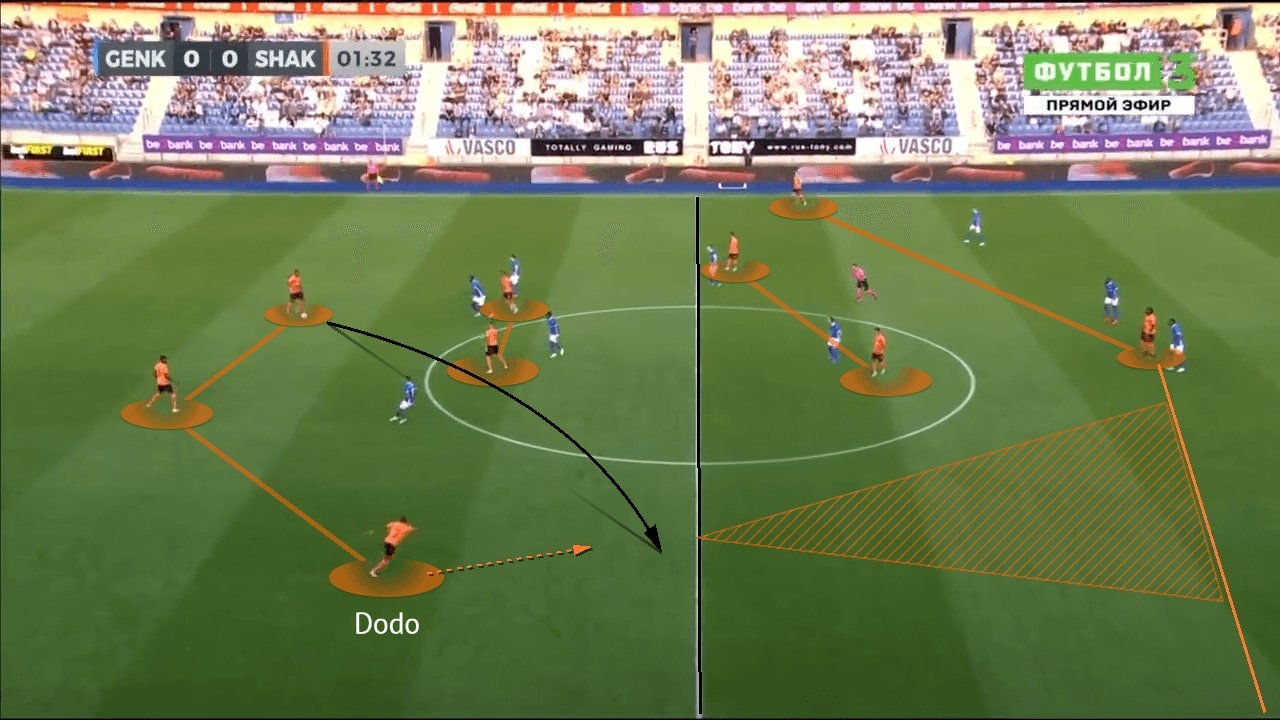 The first image outlines the 2-3-2-3 formation of Shakhtar that generated numerical superiorities in the midfield. The concept of De Zerbi was to deploy three players to hold the width on touchlines and offensive heights at the front constantly, which pinned the back four of Genk in position and separated the defensive lines. In this game, these three players were Traoré, Matviyenko, and Tetê.

As the black line in the above image clarifies the distribution of players on the pitch, we saw the above concepts benefited the team. When Genk placed two players to mark Manor Solomon and Pedrinho, they only had four players remaining in the opposition half. Shakhtar would be easily created a 5v4 overload in that zone through the 2-3 shape. In this positional setup, Dodô should always play in the right half-spaces and offering the diagonal passing option for Marlon.

By using the right-winger to stretch and pull the left-back wide, you could also see the big orange spaces for Dodô to access when he received in the midfield. However, Shakhtar were a bit sloppy in utilizing these positional advantages after getting past the midfielders, resulting in cheap turnovers in the central third. 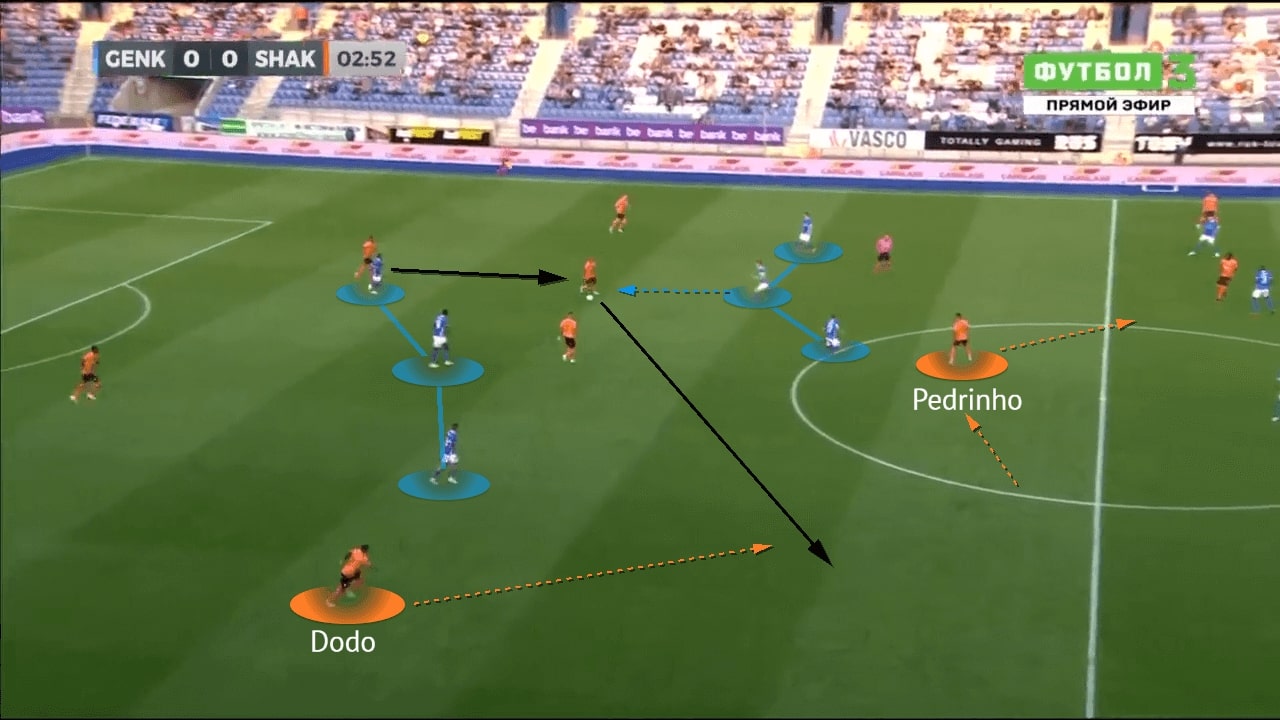 De Zerbi played Pedrinho in the centre in this game instead of on the flank. The new recruit was tasked to exploit spaces behind the opposition midfield when Shakhtar stretched the block vertically. The opponents also knew the threat of the former Benfica attacker, and they would put in more effort to track and mark Pedrinho tightly. Therefore, Shakhtar could also use him to open spaces for others in the construction process.

In the above image, Pedrinho moved to the centre from the right half-space intentionally. Shakhtar began the attack on the left where good passers such as Marlon and Antônio stayed close to each other. The idea was often “play left to go right” – De Zerbi’s men usually made a pass that switched the offensive focus from one side to the other, then hitting the final passes on the right side.

Pedrinho’s role in this attack was to further imbalance the defensive shape by moving to the left side. The movement drew the attention of the midfielder, enlarging the passing lane for Dodô to receive. Again, you could notice the vacated half-spaces that were stretched by the right-winger again. 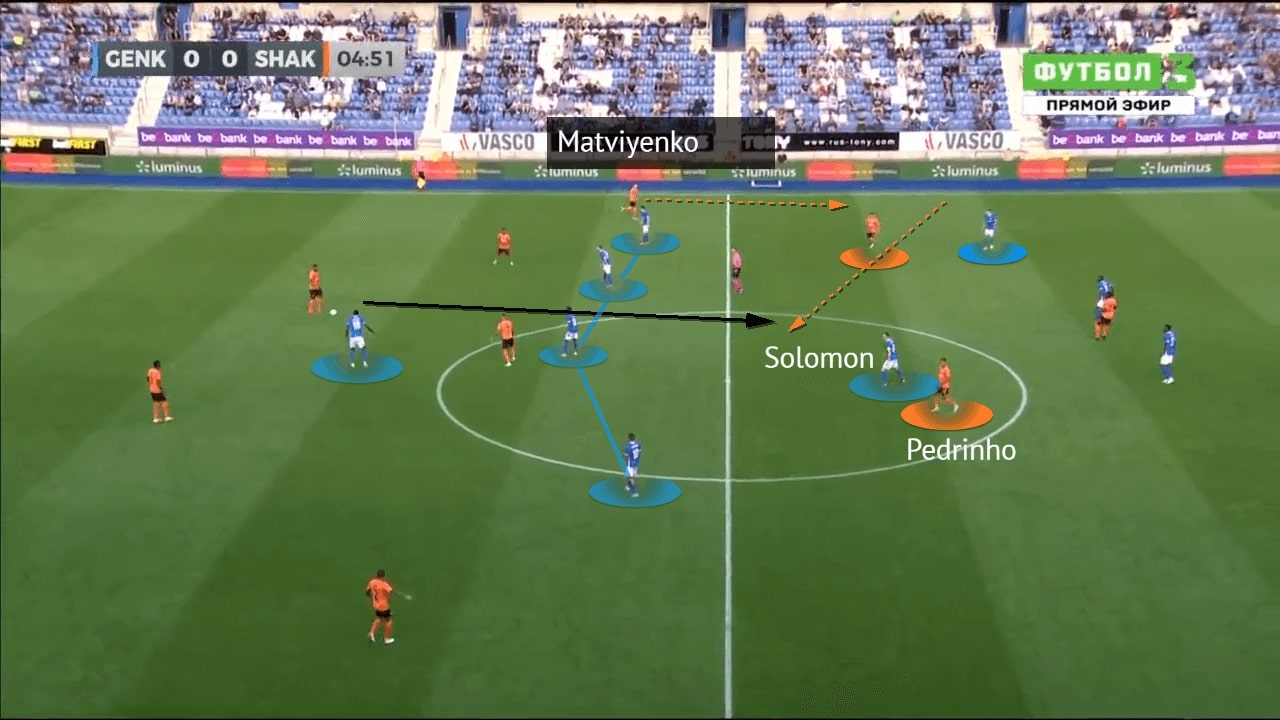 We suggested Shakhtar’s shape was a 2-3-2-3 as Pedrinho was not the only man to roam behind the midfielders. As mentioned in the above analysis, the width provider on the left was Matviyenko, so it gave room for Solomon to drift inside and played as an attacking midfielder centrally.

The Ukrainian side were extremely fluid and they were good at posing questions to defenders. If Matviyenko was deep, Solomon would be staying wider to stretch the defence. But if he saw the left-back was dashing forward, he synchronized the inward movement to overwhelm the right-back.

In the above screenshot, Marlon broke the lines with his pass again, finding Solomon who dropped into the centre (vertical option). The little secret of this move was to seize the right timing. The only moment to appear was the pass was made, Solomon must vacate the spaces initially to avoid oppositions in this area. 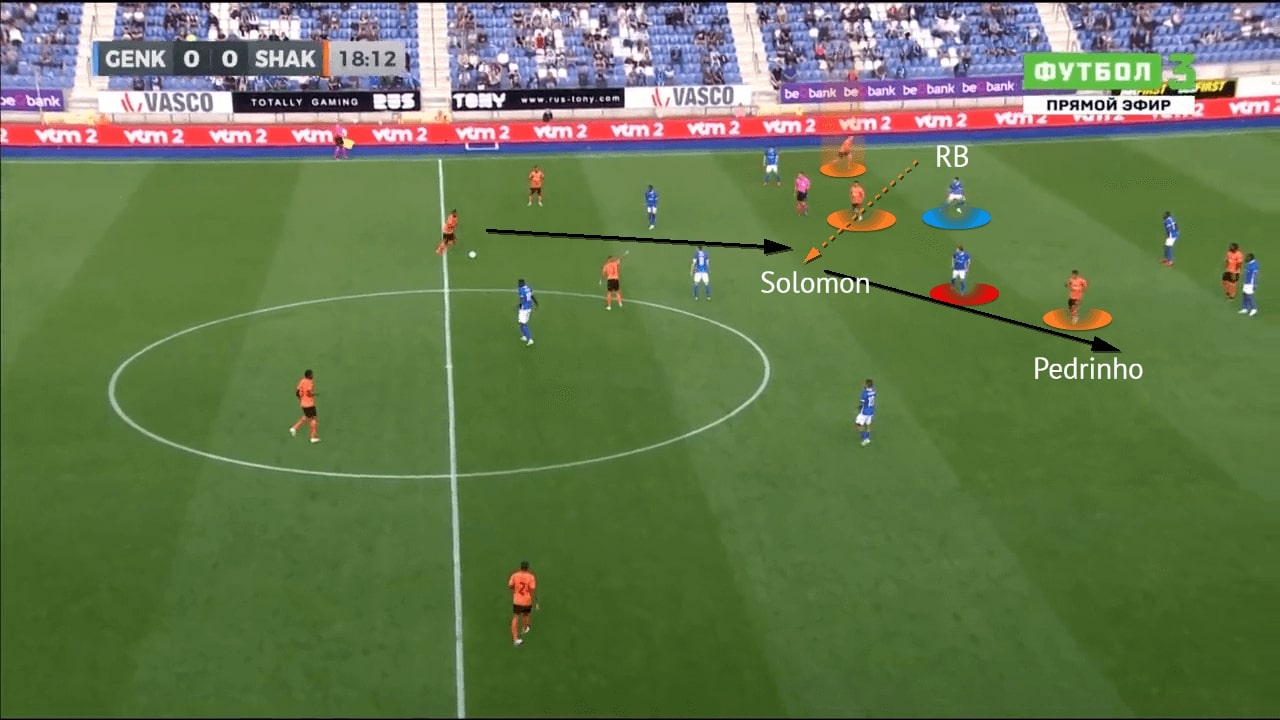 Again, we saw a similar situation in this example, and it further illustrates how Shakhtar “play left to go right”. With a pair of wrong-footed wingers who could receive the diagonal, they had a better angle to find teammates in opposite half-spaces.

As Matviyenko constantly moved up to keep the right-back engaged, Solomon always became the free player when he moved inward. By using a 2-3 shape, the likes of Antônio and Maycon often dragged two Genk midfielders out of position. And the Belgian side thought they were safe by using one player to mark Pedrinho between the lines. But this was the purpose of the “little secret” mentioned previously.

When Solomon freed himself to receive in half-spaces, that spaces behind midfield suddenly became a Shakhtar 2v1. The Genk midfielders highlighted in red was in trouble as he could never approach two players. It was easy to bypass him by a simple lateral or diagonal pass between Solomon and Pedrinho and Shakhtar were in the final third. 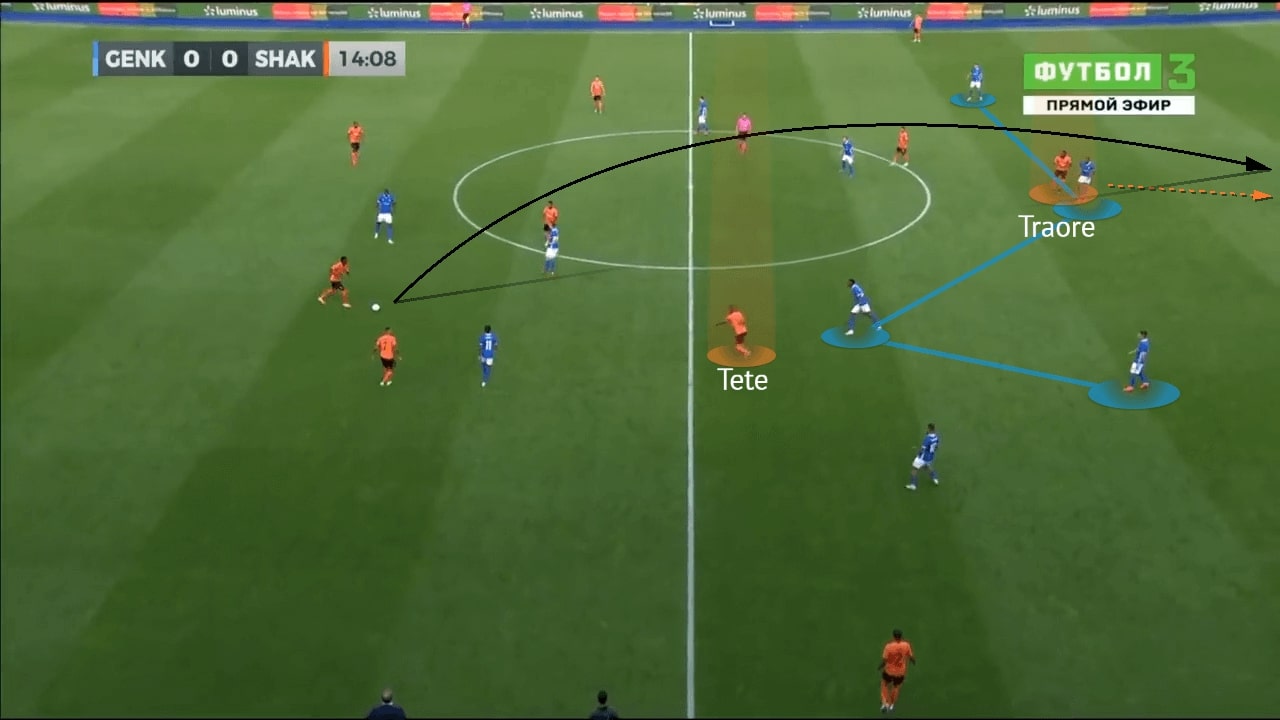 Apart from the stricter 2-3-2-3 structure, we also saw variants of attacks were developed. For example, Traoré occasionally dropped to offer another angle of support in spaces the midfield, creating the overload with Pedrinho (while Solomon stayed wide). However, this was ineffective in terms of progression as they did not have enough runs behind.

Sometimes Shakhtar were more direct in their search for a 1v1 opportunity behind the high line, although it may not have been planned by De Zerbi. The key was the same – dominating half-spaces, this time Tetê came inside as the right-back provided the width already. Genk tried to adapt by Lucumí stepping up to close the Brazilian right-winger, but it resulted in a Traoré 1v1 against the other centre-back in the centre. Vitão could simply ping the ball behind on the above occasion. 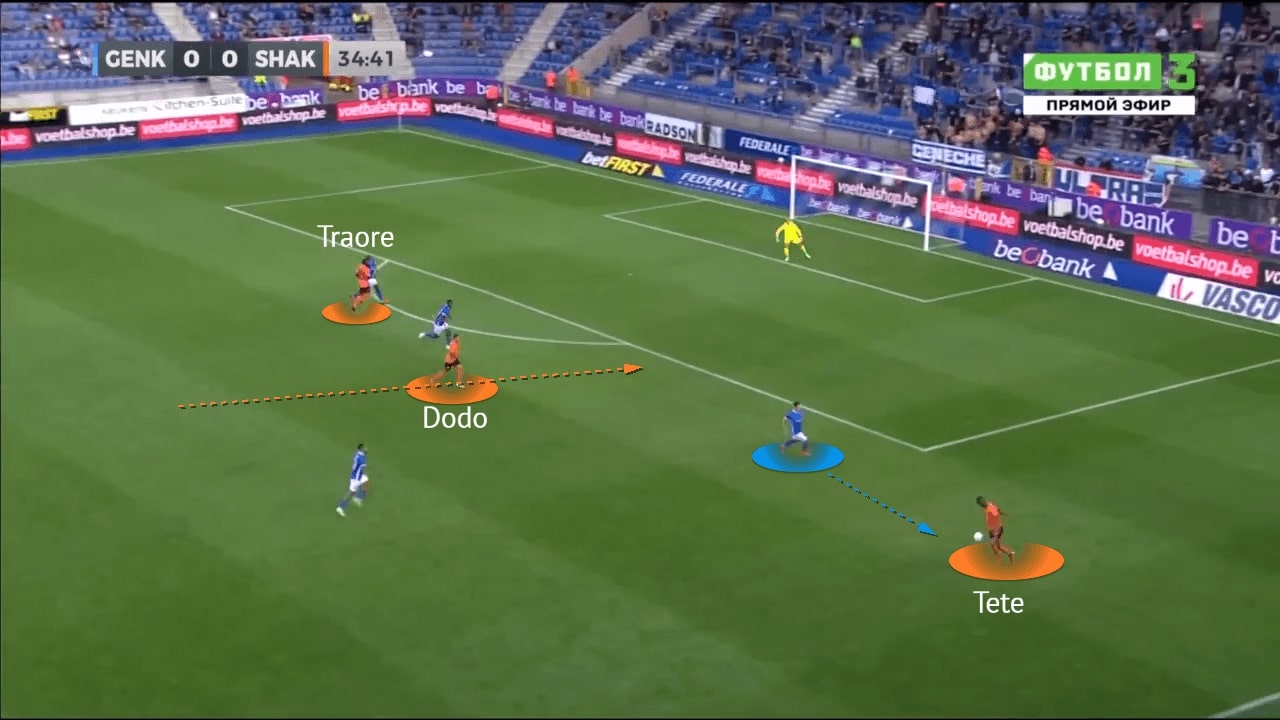 Another impressive part of Shakhtar’s game was the dynamic use of Dodô – the right-back could be everywhere on the pitch. Sometimes he appeared in a position where the opposition weren’t expecting, and that surprise would be creating good conditions in the attack.

For example, Dodô suddenly sprinted forward and attacked with Traoré liked a two-striker system. They kept both centre-backs engaged which allowed Tetê more spaces to take on the left-back when he controlled the diagonal pass.

Left-back involving in the second half

Since Solomon was injured, Alan Patrick came in and played the second half of the game. Shakhtar did not have a smooth start in the first half as they conceded possession cheaply in the midfield. When they gradually grasped the principles and gained control by the 2-3-2-3, the finishing was lacking. Then, Genk hit them with strong flank plays in the last third of the first 45 and scored a valuable goal. 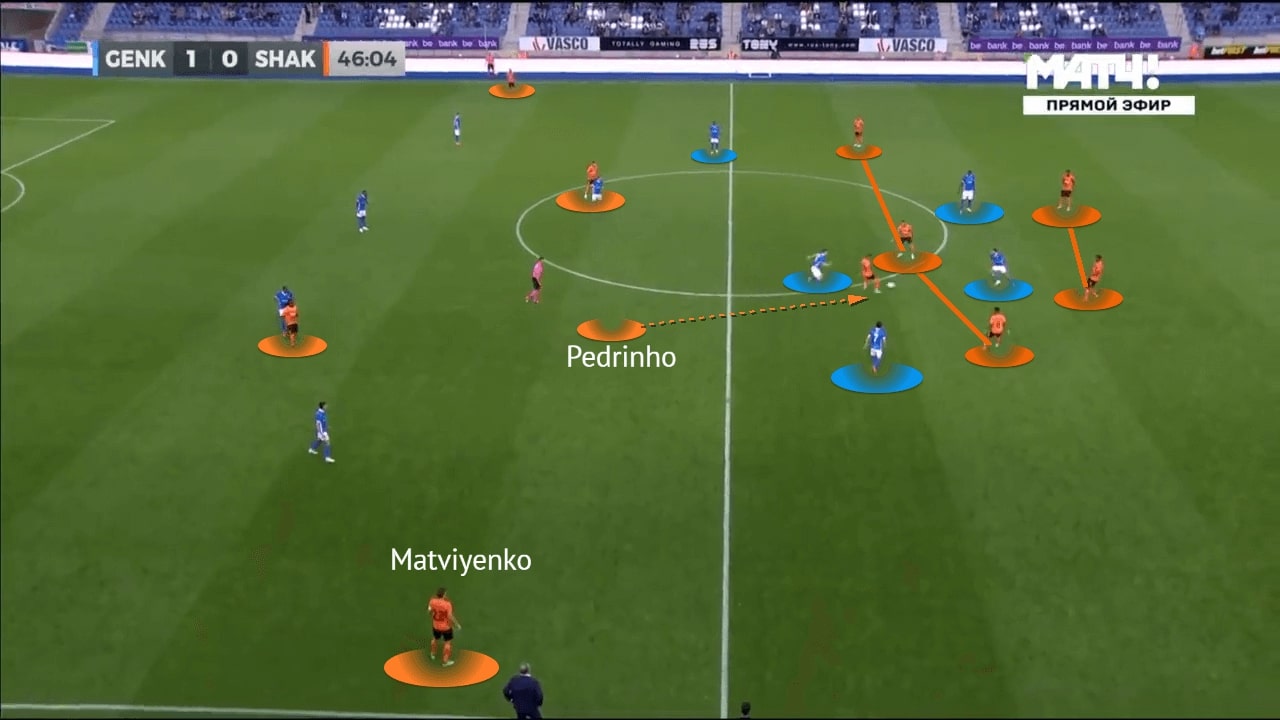 Even in deficit, De Zerbi did not abandon his principles, but modified them and reverted the team shape. The above image shows the Shakhtar shape in the second half, it was the same 2-3-2-3 formation: width and offensive heights were provided by two players lurking in spaces behind the midfield and using short passes to break lines step by step.

In here, Shakhtar again enjoyed the 7v6 overload after using three players to pin the back four of Genk. 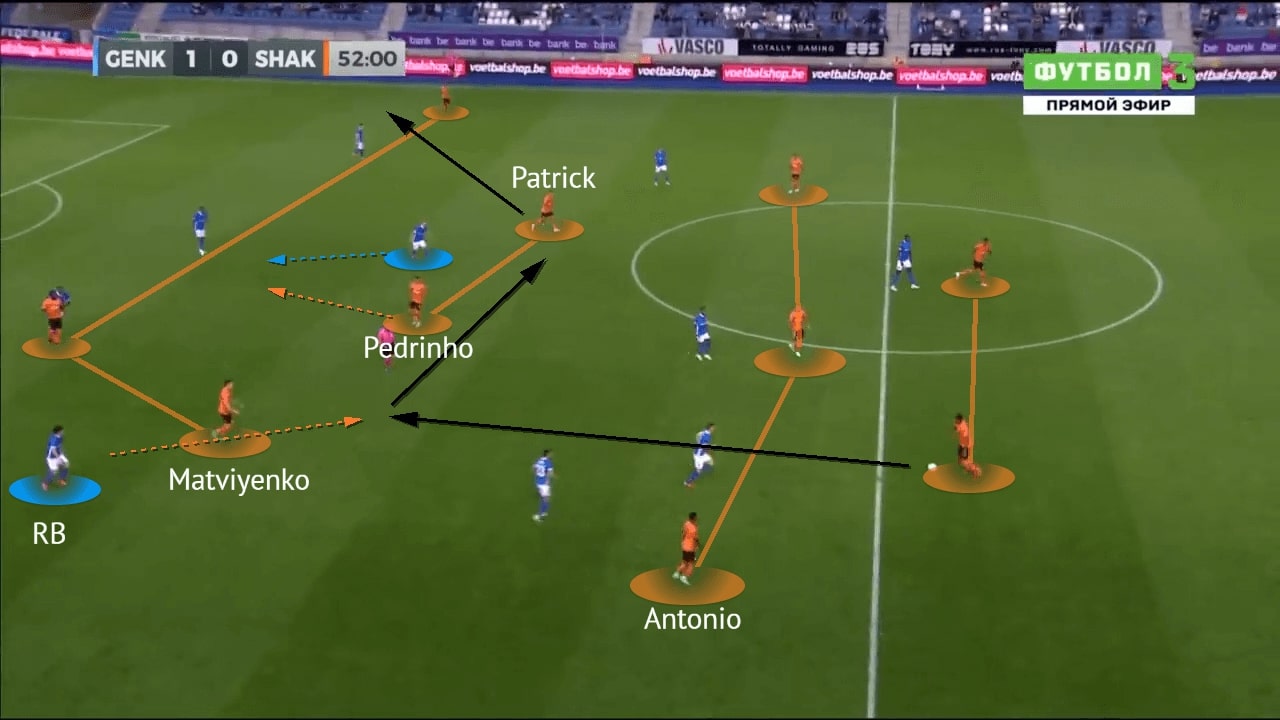 The difference was the midfield occupation. In the first half, Solomon usually vacated the spaces behind midfield, but Alan Patrick was constantly occupying this space. Apart from that, the left-back was also given a greater role to join the attack, which Shakhtar was missing in the first half.

This example shows the keys of the Shakhtar attack. Firstly, Antônio stayed a bit wider to open the vertical passing lane for Marlon. Matviyenko, the left-back who only hold width before the break, came inside to receive. Muñoz gave the opponents too many rooms to play, and he could not stop the skipper.

Then, you could see the 2v1 overload again. Pedrinho simply moved forward as a decoy to drag away the midfielder, gave Matviyenko spaces to find Alan Patrick. The “Play left to go right” concept was still applicable as the attack eventually ended up on Tetê’s side. 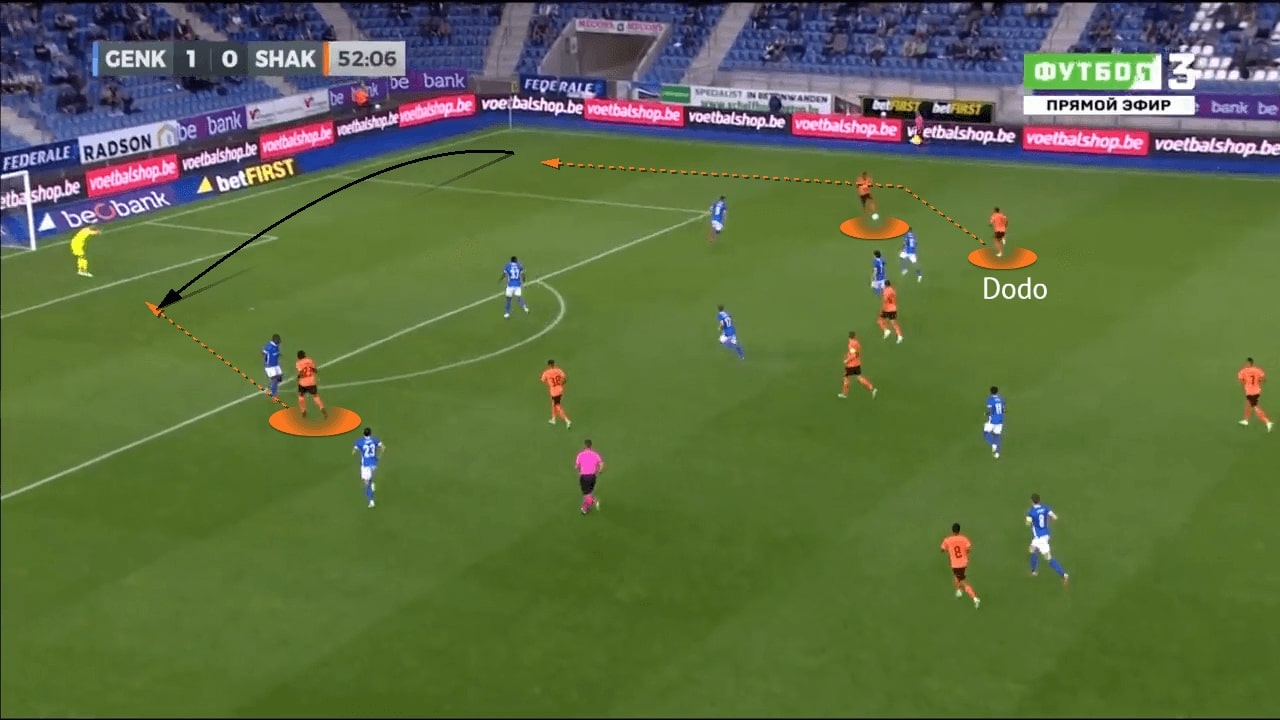 This series of plays almost brought Shakhtar the leveller. When Tetê received, Dodô always arrived and support by various runs. In this situation, the right-back overlapped out wide, into the path which Tetê could release by his stronger left foot.

Then, Traoré just needs to attack the cross, or Dodô can cut back and find the midfielders attacking from deep. 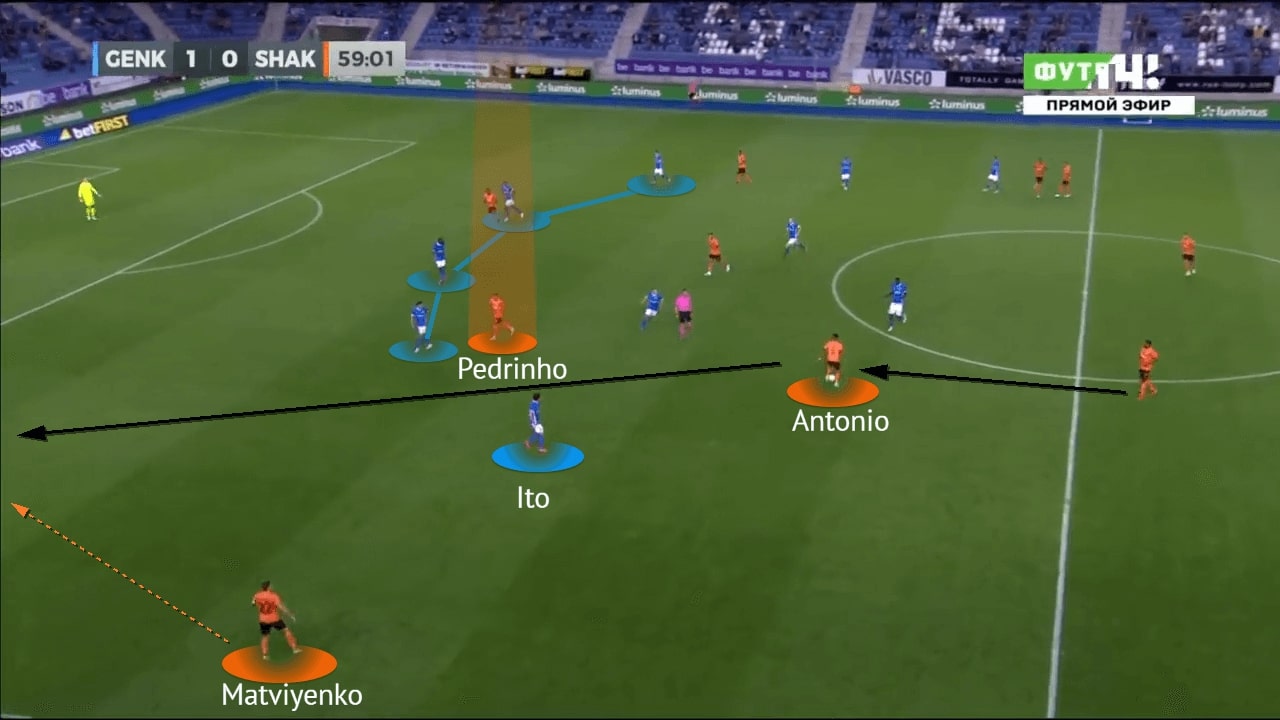 Alternatively, if the Genk midfielders stayed deep, they were also punished as Antônio was good at passing. In this situation, we could see Pedrinho’s smart positioning that pinned the right-back narrowly in the half-spaces. That vacated the wide zones for Matviyenko to receive on the left. It also shows Shakhtar’s ability to break the lines if there was no pressure on centre-backs and midfielders. 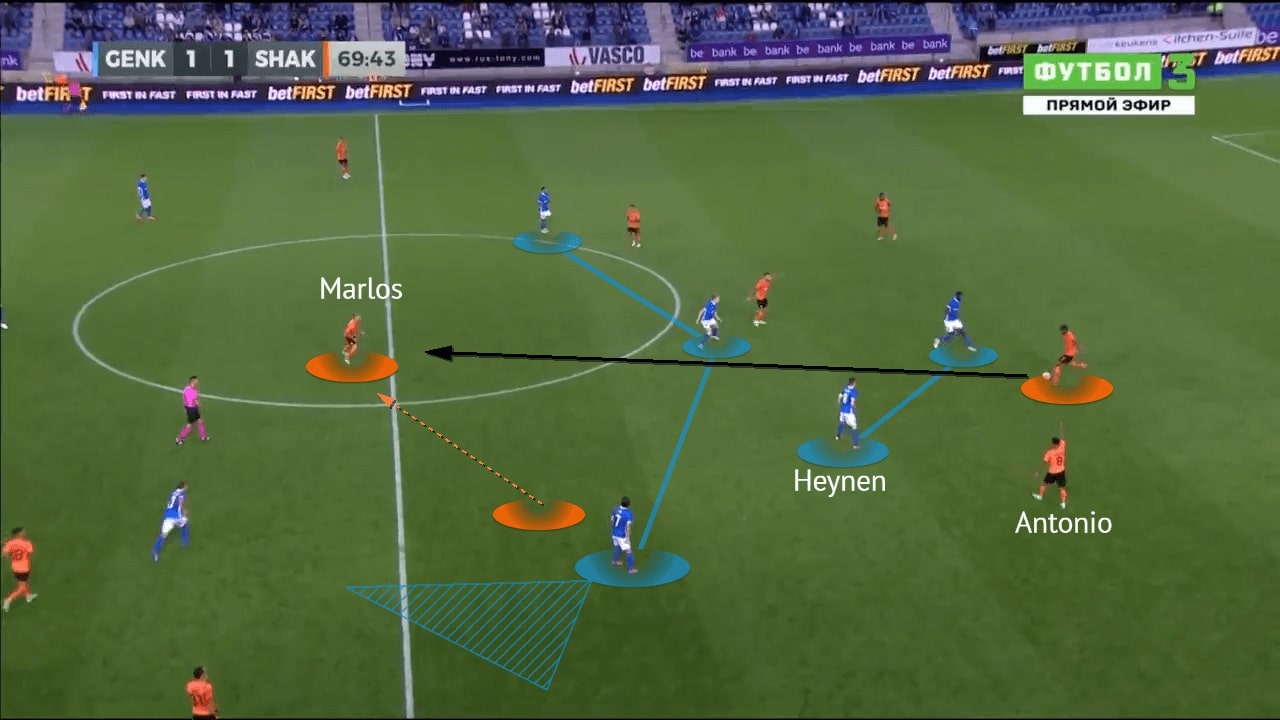 De Zerbi kept pushing the team and made several substitutions, including the introduction of Ismaily and Marlos, but the idea of play did not change. In this image, Antônio’s good positioning once again drawn Bryan Heynen away, opening the channel for Marlon to pass.

This time, Marlos appeared behind the opposition midfield to receive, and he had good techniques and skills to turn even the defenders were pressing from the back. Throughout the game, Genk could never close this space as the defenders were always pushed down by three Shakhtar players. 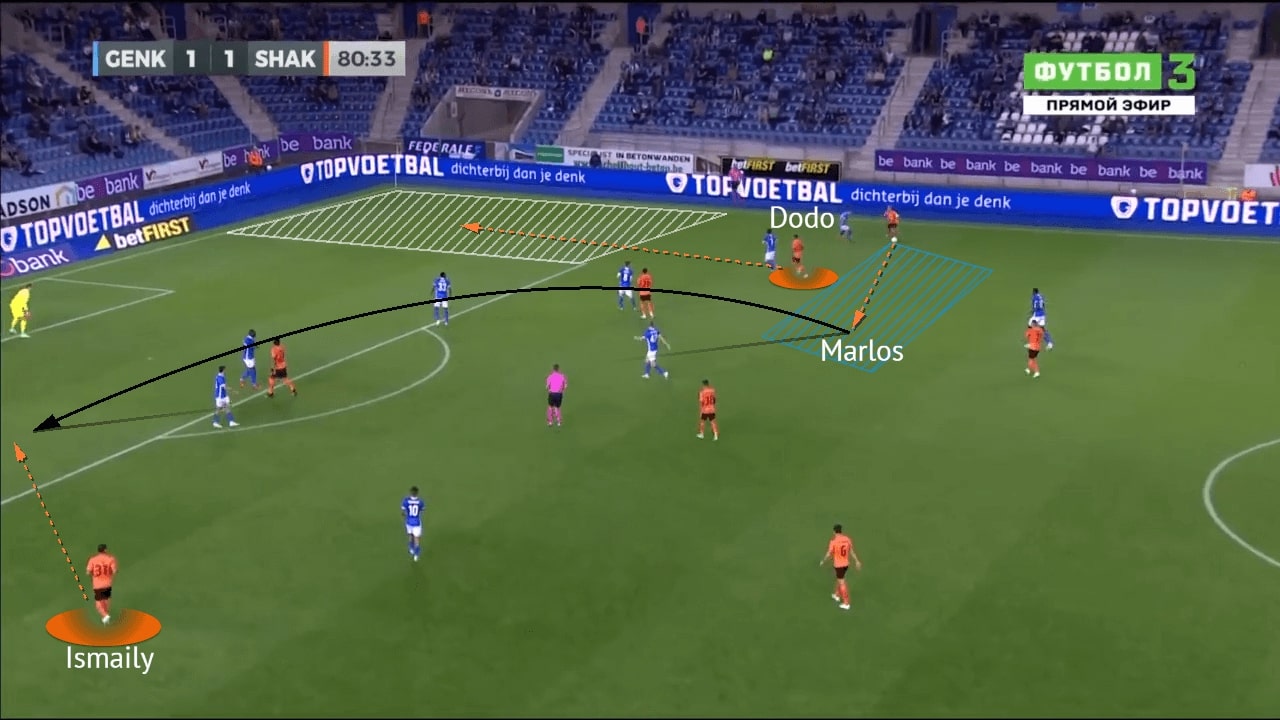 Lastly, we will analyze the winning goal, it was also attributed to the dynamic use of Dodô. Even he was an inverted right-back in the second phase, he offered energetic runs in the final third to help the right-winger constantly.

Again, Shakhtar had the chance to play the final passes on the right side, with the left-footed Marlos on the ball. Dodô made the runs to attack the white zone early, but the outcome was different from the previous example. Instead of being released and crossing from the byline, the early run vacated the half-space for Marlos to dribble into, so the 33-year-old winger could send a diagonal into the box. From the opposite side, Ismaily will be arriving in the penalty zone to meet the delivery.

Shakhtar were the better side in the Luminus Arena, but as De Zerbi said, there are 90 minutes more to play. The Ukrainian side dominated possession and the game with good passing and clear positional concepts, we would be expecting the same when the second leg is played.