Thiago Almada: The 20-year-old Argentinian star looking to make a name for himself in the MLS – scout report

The MLS has become quite a hotspot for young South American talent in recent years with players such as Ezequiel Barco, Santiago Sosa, and Brenner all making the move from their respective Southern leagues.

Another player set to make the jump, from the Argentine Primera Division, is Velez Sarsfield’s Thiago Almada, who is on the verge of moving to Atlanta United, the 2018 MLS Cup Champions. The attacking midfielder has arguably been Velez’s best player for multiple seasons now and could be a huge coup for the Georgia-based club.

The Argentine made his debut for Velez back in 2018 and was even included in The Guardian’s ‘Next Generation’ list for 2018. The 20-year-old has been linked with a move to top European clubs like Manchester United, Barcelona, and Atletico Madrid, so it can be seen as quite a surprise that Atlanta United managed to pique his interest.

Regardless, it is a very exciting move for both parties and one to keep an eye on for the remainder of the MLS season.

This will be a tactical analysis piece in the form of a scout report of Almada. It will be an analysis of the player’s strengths and weaknesses as well as taking a look at where he could fit Atlanta’s tactics and even how he compares with the other midfield players.

The young Argentinian star stands at 5’7’’ (171cm) and weighs precisely 62kg (136lbs), so of course, Almada has quite a small frame, which gives him a low centre of gravity in possession and helps him to receive in tight spaces before playing or dribbling out of pressure.

Almada may not prove to come across admirably in data visuals but the player has immense quality and is the most valuable player in the division under the age of 24. 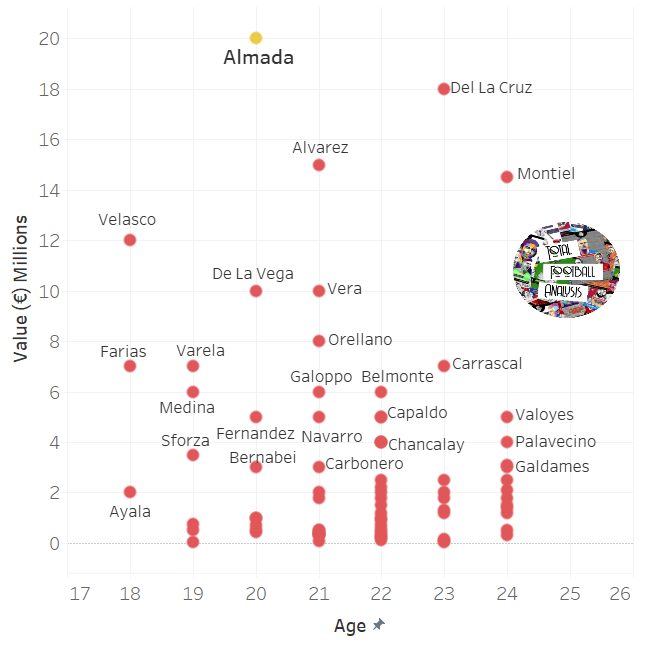 In fact, Almada is the most valuable player in the entire division, according to Transfermarkt who value the player at €20 million with only Nicolas De La Cruz close in second place at a valuation of €18 million.

The attacker plays in a number of key positions in the midfield. In the past twelve months, for club and country, Almada has been utilised as a left-winger, right-winger, centre-forward, number ‘8’, and a number ‘10’. The final position is his preferred role and is the one that he has played the most throughout his time with Velez.

In the past 12 months, Almada has been deployed as a number ‘10’ in 37 percent of his games, more than any other position. The following visual displays the roles that the 20-year-old has executed the most over the past year. 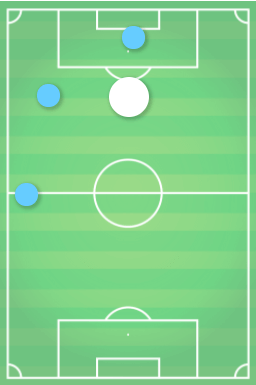 In these areas, Almada drifts between the lines and tends to play in the halfspace pockets, particularly the left-halfspace pocket, looking to create good angles to receive with a positive body orientation so that he can quickly turn on the ball or else be a wall pass for a ball-near teammate.

Almada’s ability to do this allows his teams to be proficient at progressing the ball through an opponent’s defensive block. Looking at the player’s heatmap from the past 12 months, it is very noticeable what areas of the pitch Almada likes to have the ball. 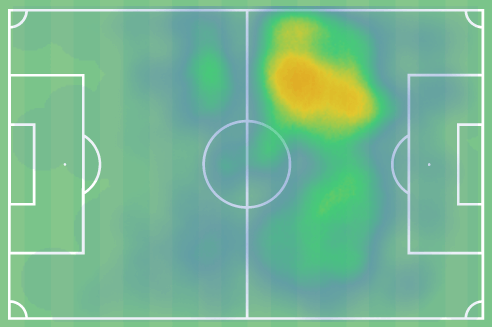 The left-halfspace has the most action from the youngster but Almada also likes to drift over to the opposite side of the pitch to receive too as well as out to the wide areas. Later in this piece, examples of Almada receiving in these positions will be analysed in further detail.

Looking at Atlanta United from the current MLS season under the management of Gabriel Heinze prior to his dismissal, the Five Stripes did not have a player who was adept at receiving in these pockets before turning to play forward.

In fact, apart from Jürgen Damm, Atlanta’s creativity has been severely lacklustre, hence why they have struggled to score this season despite trying to play an open and expansive system. 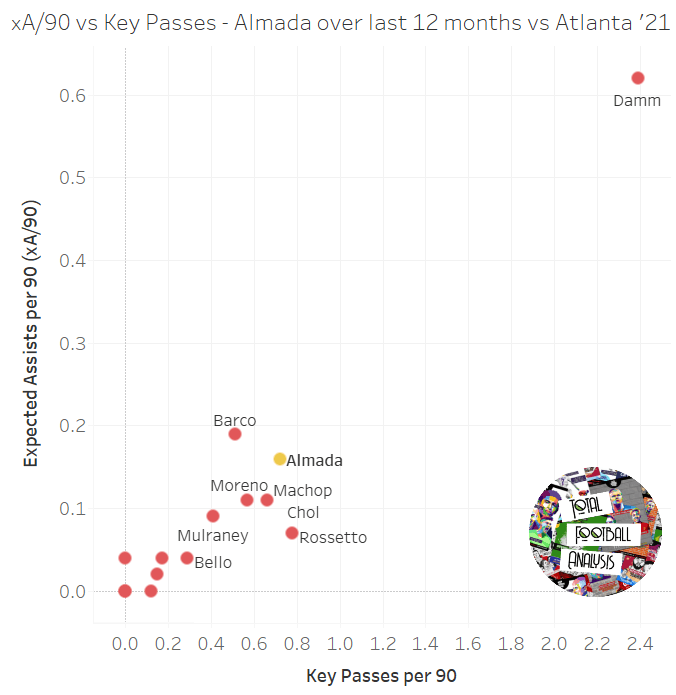 The graph above compares Almada’s expected assists per 90 (xA/90) and key passes per 90 from the last 12 months in all competitions with that of Atlanta United’s midfielders from the current MLS campaign.

The Argentinian is not performing overwhelmingly better on the graph but is still outperforming the majority of Atlanta’s midfielders. Jake Mulraney and George Bello have been included in this data visual because, whilst they are wingbacks, the pair play in extremely advanced positions on the field and are two of the team’s main attacking outlets.

Almada’s xA/90 stands at 0.16 per 90 in all competitions whilst his key passes per 90 are at a reasonably good 0.72 per 90. From this graph, the Velez academy product ranks as third for xA/90 and also third for key passes.

Atlanta have mainly deployed a 3-4-2-1 during the current campaign so perhaps having Almada as a left-winger and Damm – who is performing extraordinarily well – as a right-winger in this system could prove to be a very dangerous wing pairing.

Receiving in pockets and creative output

In the previous section, we discussed how Almada is very efficient at creating passing angles when his side are in possession and they are looking to break the lines of the opposition. The Argentinian is constantly looking to receive between the lines and keeps moving to the ball-side in order to provide a passing option. 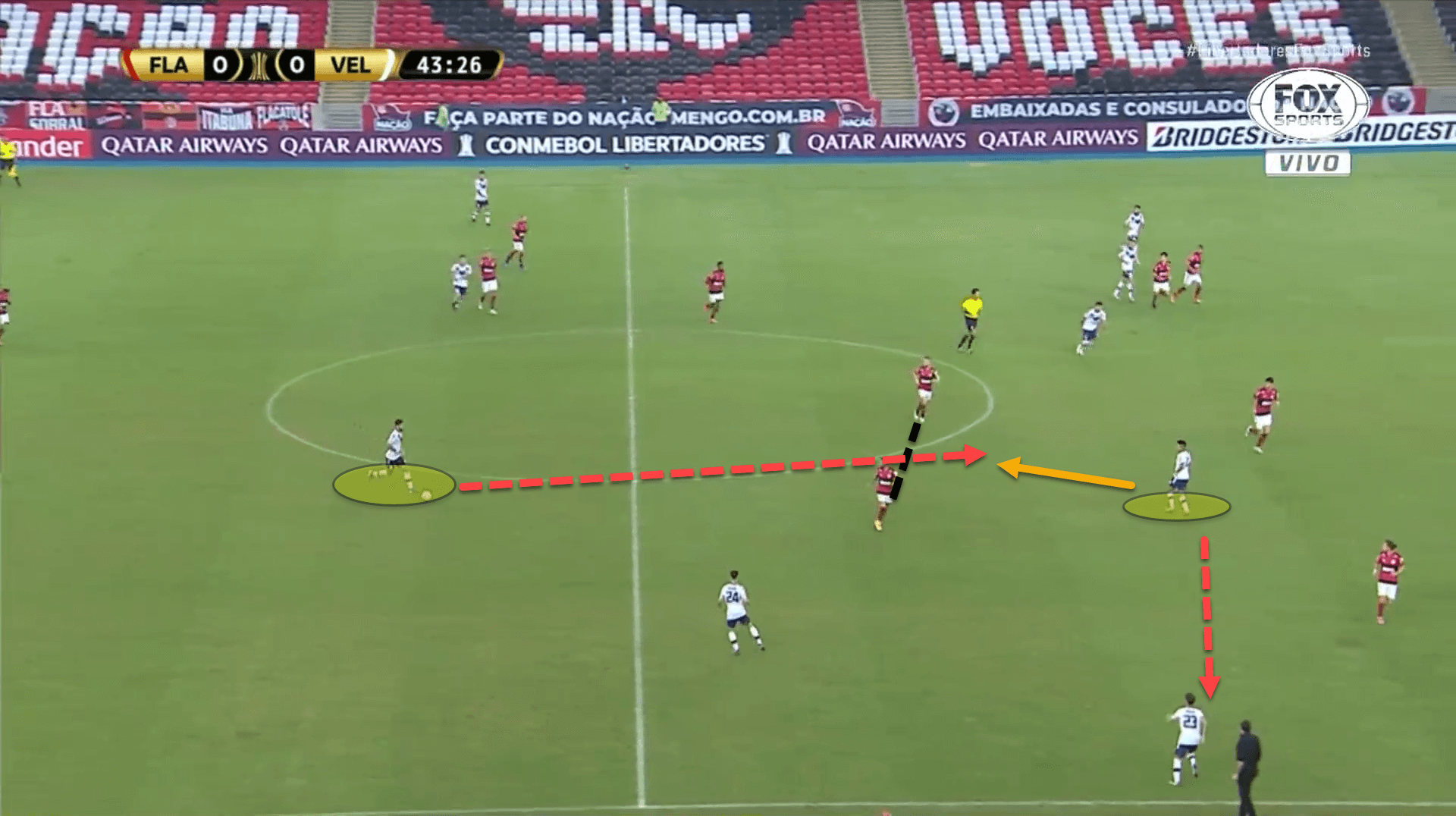 Here, the Velez centre-back has possession of the ball and is looking to play forward. Almada finds a pocket of space between two of the opposition’s midfielders and opens his body up to receive in the pocket and play out, progressing the ball from the middle to the final third.

Whilst being very proficient at being a wall pass in this scenario, Almada also possesses immense quality to dribble his way out of pressure. Players who operate in halfspace pockets need to be good dribblers and have good body orientation to make their next move when they receive because as soon as they get the ball from a teammate, multiple defenders will jump on them to try and take the ball away. 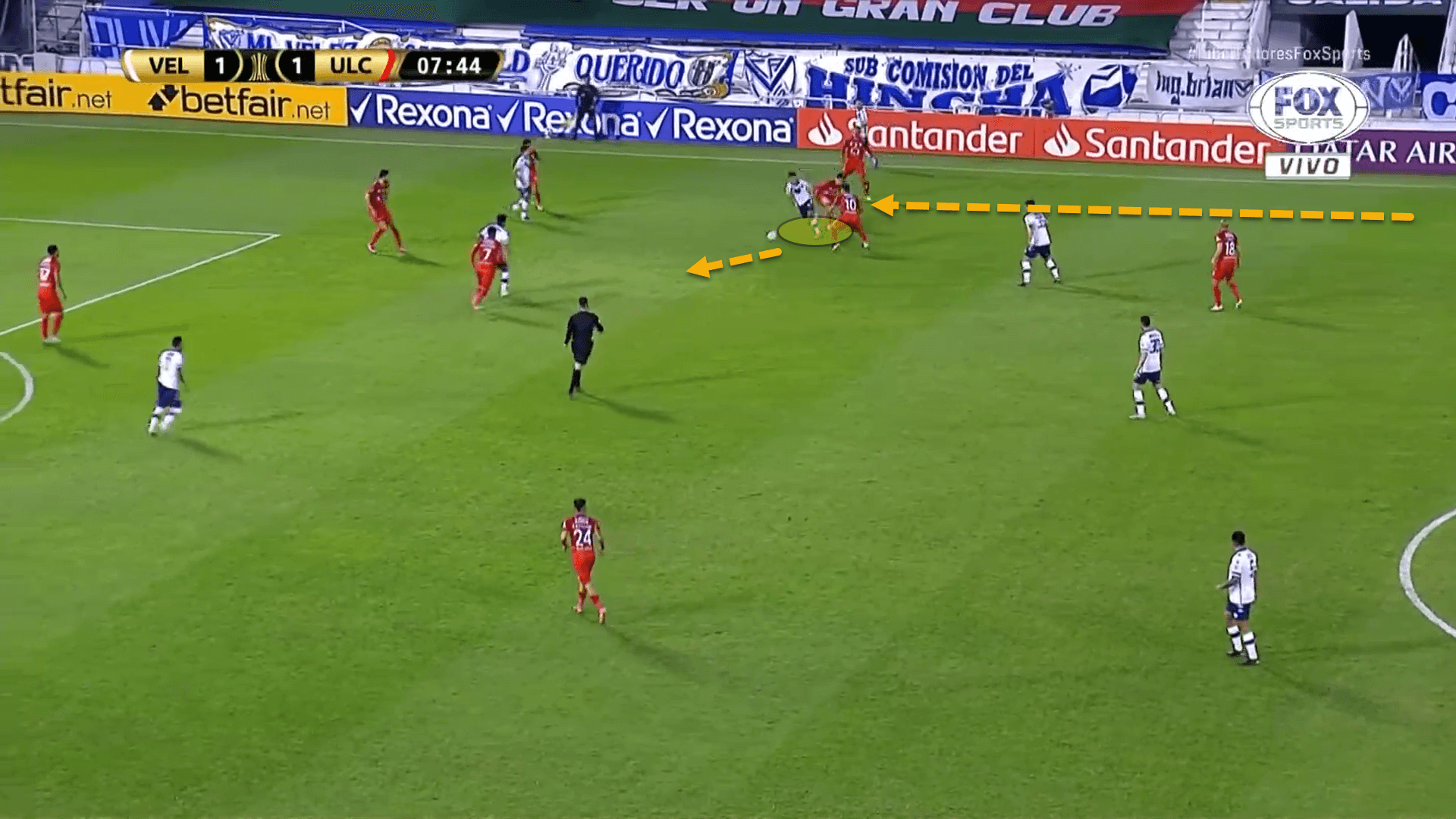 Here, Almada receives the ball with his back turned to a defending player and quickly drops his shoulder, turning to his right and leaving the defender in his wake. The soon-to-be Atlanta United player attempts an average of 4.51 dribbles per 90 with a 60.3 percent success rate.

Almada does not only look to receive in the halfspace pockets, although this is his preferred area. The 20-year-old drops deep quite a lot too, sometimes as the deepest midfielder, to help with ball circulation and to find gaps in the opposition’s block using his excellent vision. 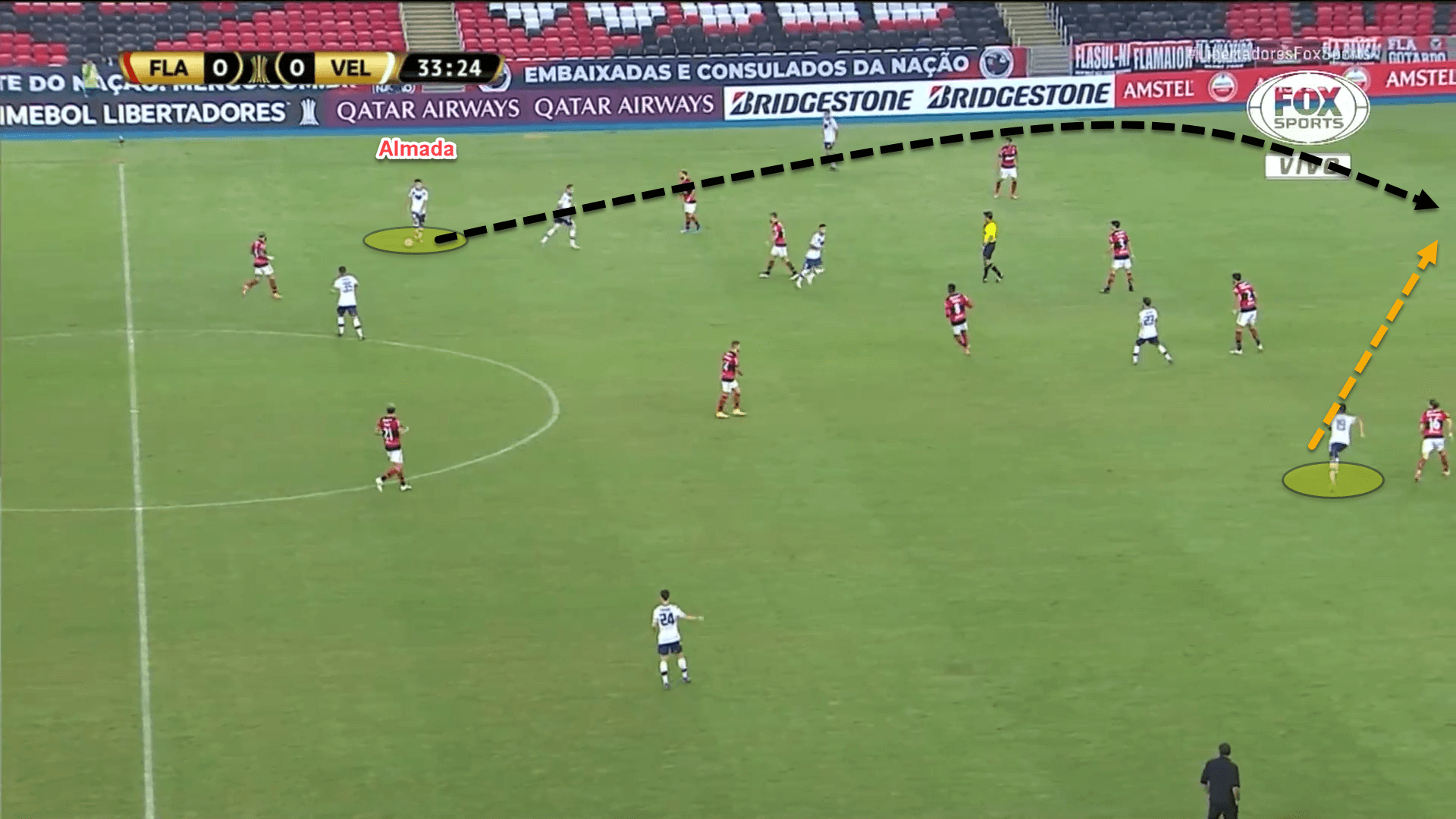 Almada completes 1.54 long balls per 90 despite being an attacking player. He also completes 1.98 through passes per 90 and 4.88 passes to the final third.

In the Argentinian Primera Division, the Velez star was one of the most creative players. 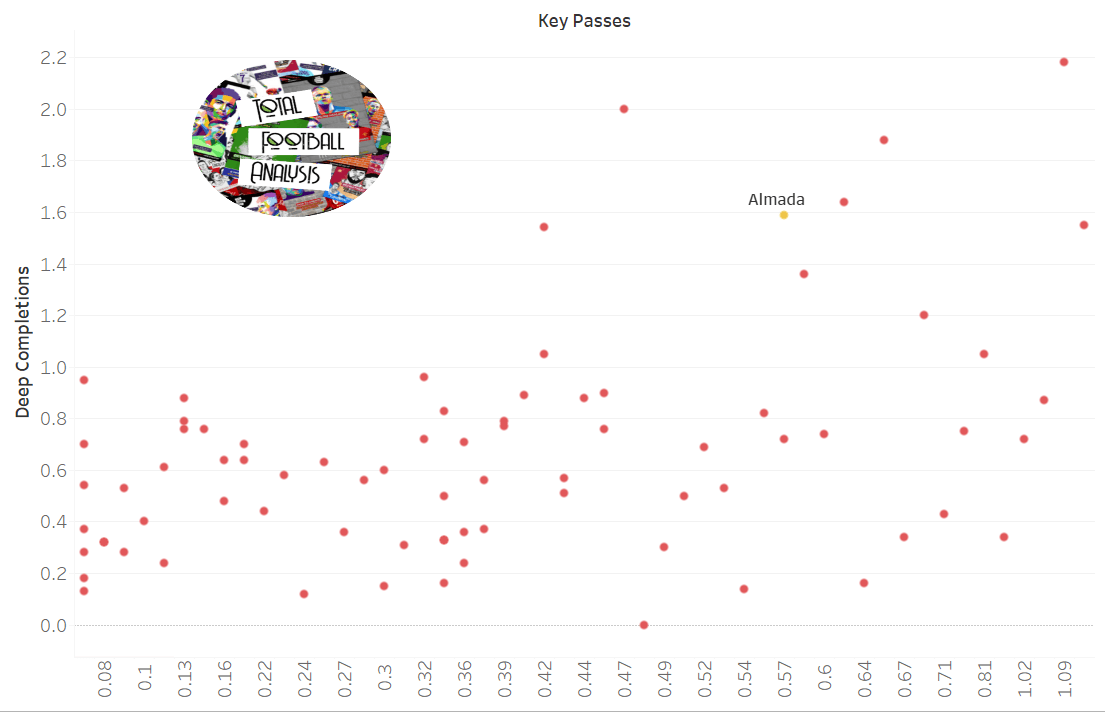 Almada is a very hard-working player on and off the ball, in the defensive and offensive phases of play. In the offensive phases, the Velez attacker is constantly looking to receive, as already analysed previously, however, he also makes progressive runs in behind an opponent’s backline in order to receive and to stretch the backline, creating space for others. 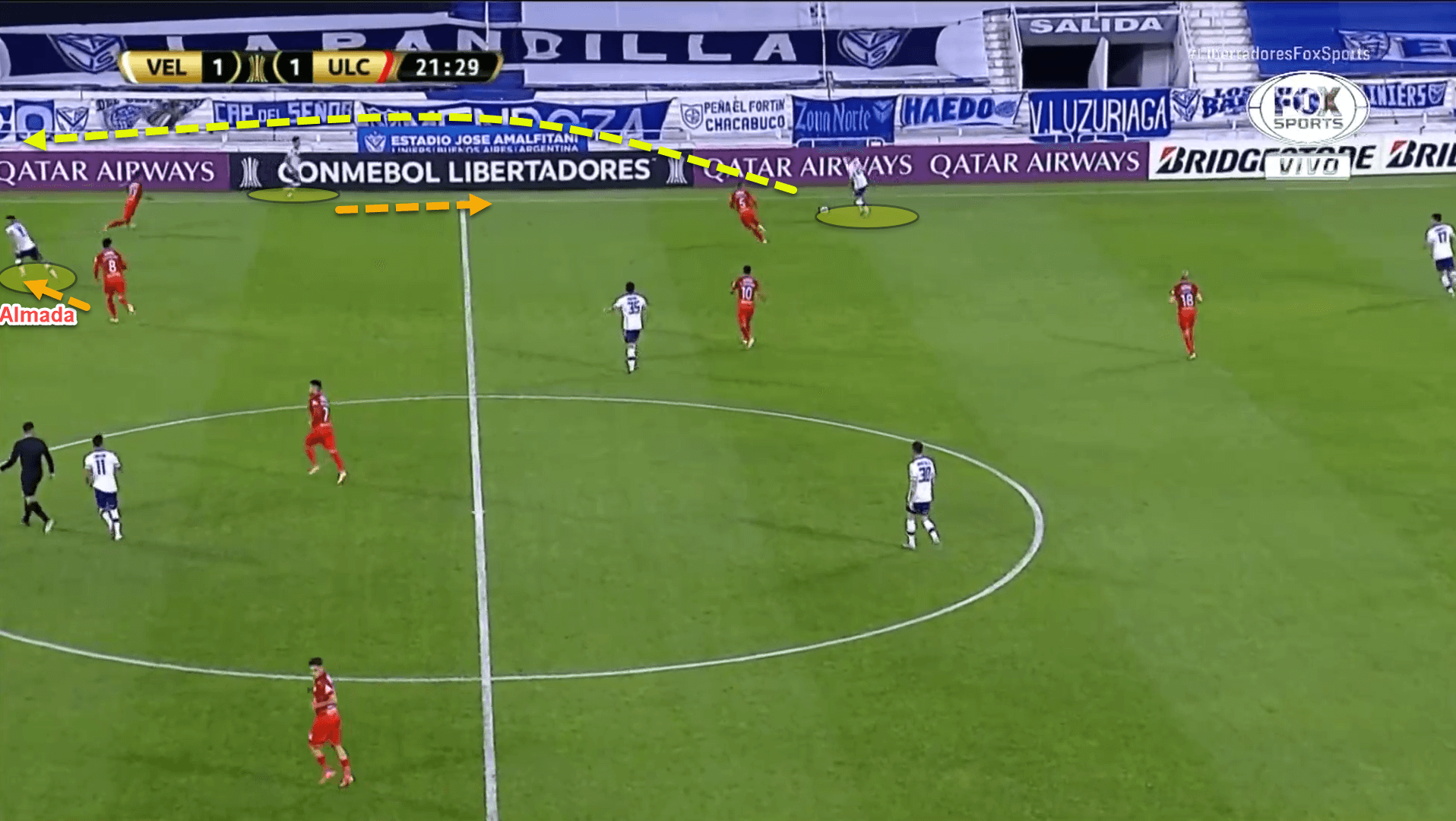 Here, Almada and the wide-player for Velez have performed a successful countermovement when looking to receive off the fullback and break down the opposition’s mid-block. The winger has dropped short to receive which attracts the opponent’s left-back. In return, this leaves space for Almada to run into and receive the ball in behind, putting him through on goal. 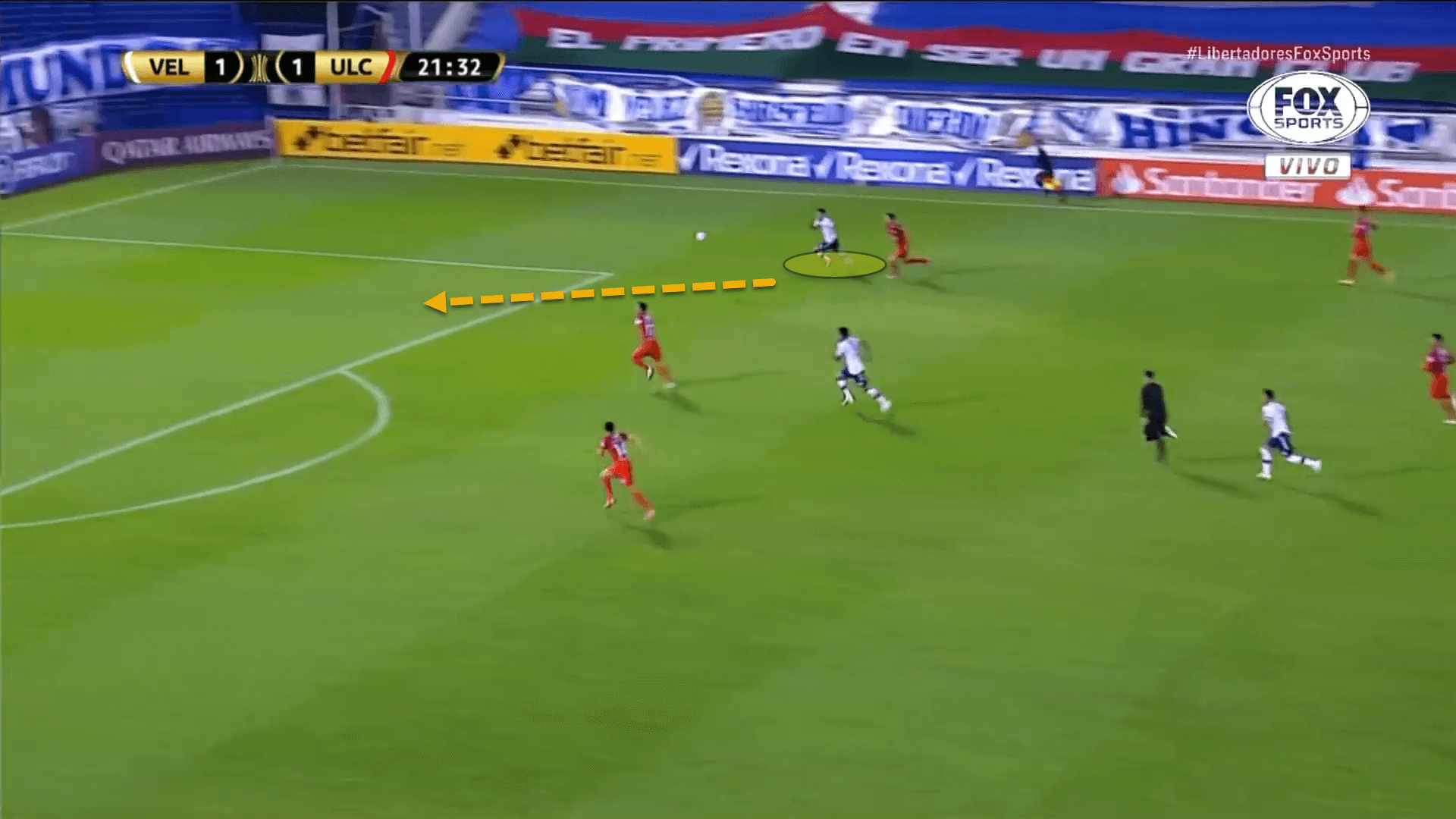 Oftentimes, Almada will make a run beyond the centre-forwards into the box to latch on the end of a cross. 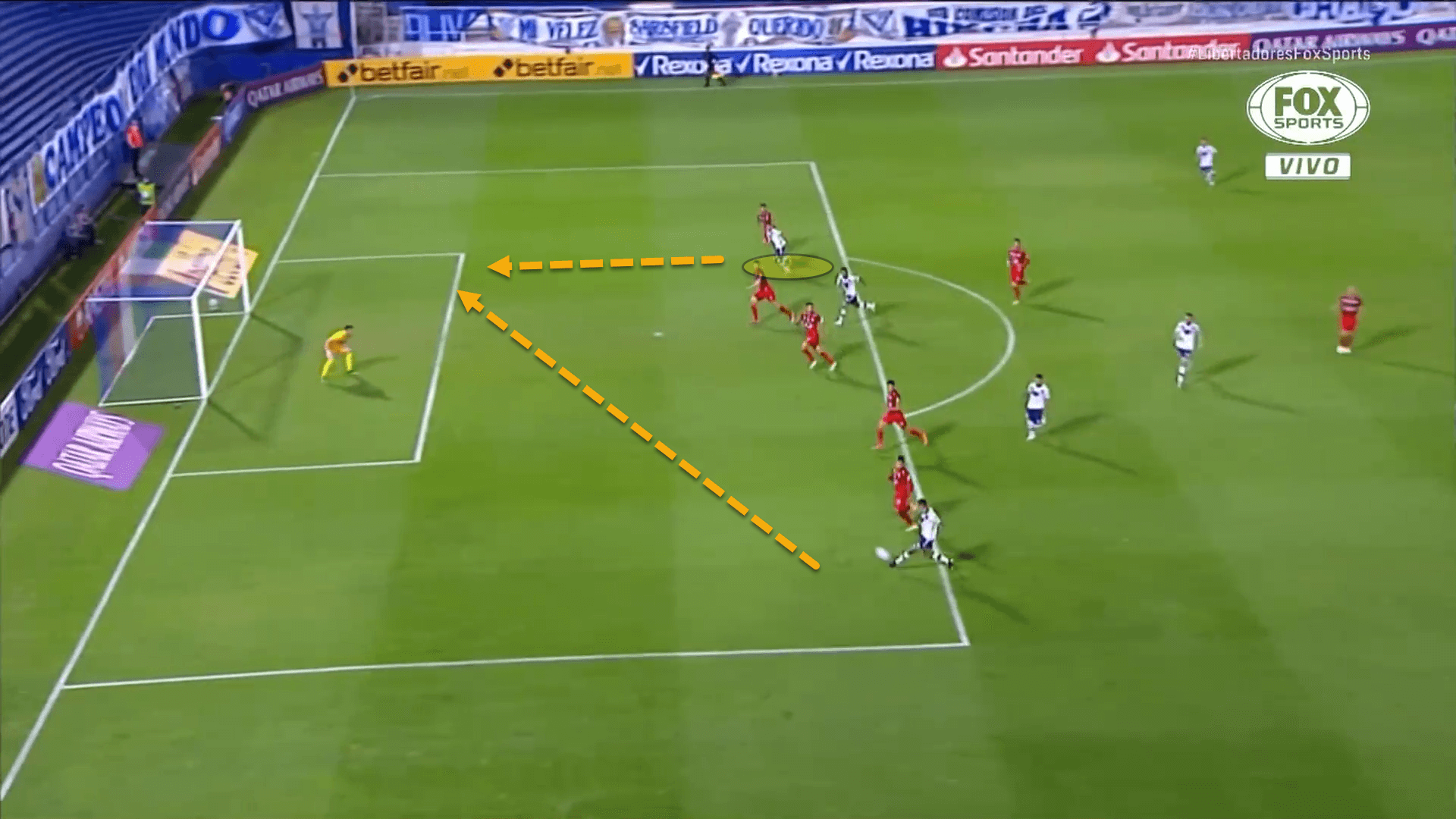 Almada likes to make a lot of third-man runs, certainly a concept coached well by Marcelo Bielsa disciple Gabriel Heinze during his time at Velez Sarsfield from 2017-2020.

Third-man runs are a really efficient way of creating space to play through an opponent’s defence. According to former Barcelona midfielder and current Al Sadd head coach, Xavi Hernandez, “the third man is impossible to defend” against. 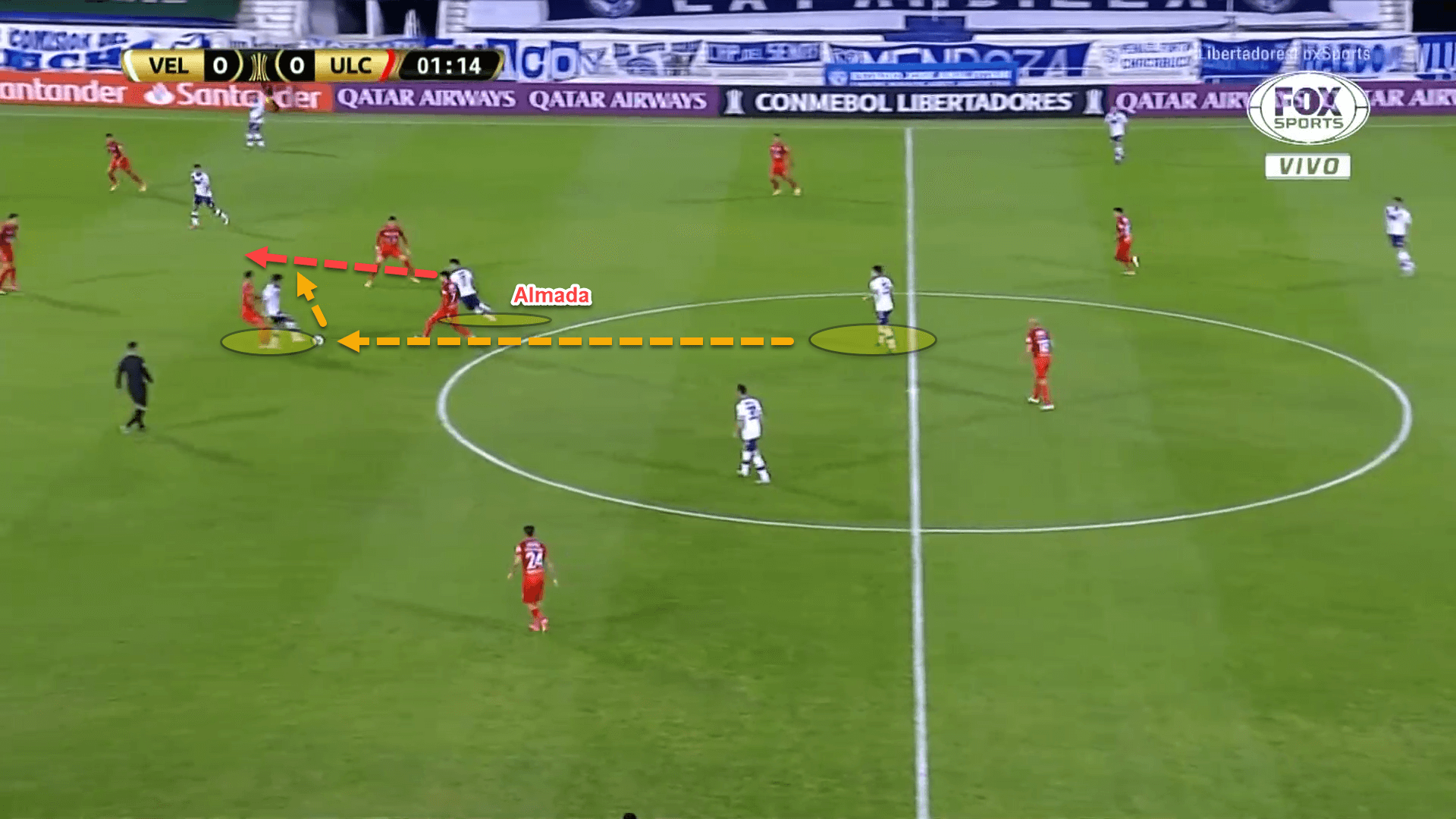 Atlanta are a team that utilise a lot of third-man runs and so Almada will fit right in should his move to the Five Stripes go ahead.

In terms of goalscoring, since becoming a professional footballer, making his debut back in 2018, Almada has scored just 21 goals in all competitions for club and country which is quite a low amount. 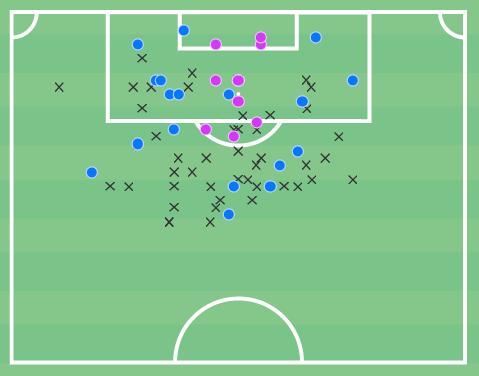 The above data visual plots all of Almada’s last 75 shots in every competition. As can be seen from the image, the youngster takes far too many shots from outside the box in low percentage areas which limits the chance he has of scoring.

What is also noticeable from this visual is that when the Argentine does take shots inside the area, the majority at least hit the target, with very few being off target. However, very few of his shots outside the area manage to even hit the target. The lesson here for the young midfielder is to try and take fewer shots from low percentage positions.

As stated previously in this article, Almada is a very hard worker out of possession in the defensive phases for his sides. The attacker completes 3.64 recoveries per game with 61 percent coming in the opposition’s half. He also partakes in 4.51 defensive duels per 90 with a success rate of 53.4 percent.

One of the reasons behind his excellent numbers is defensive role in Velez’s system. When he is deployed as a winger, Almada is instructed to drop back and become part of a back five, essentially as a false wingback. 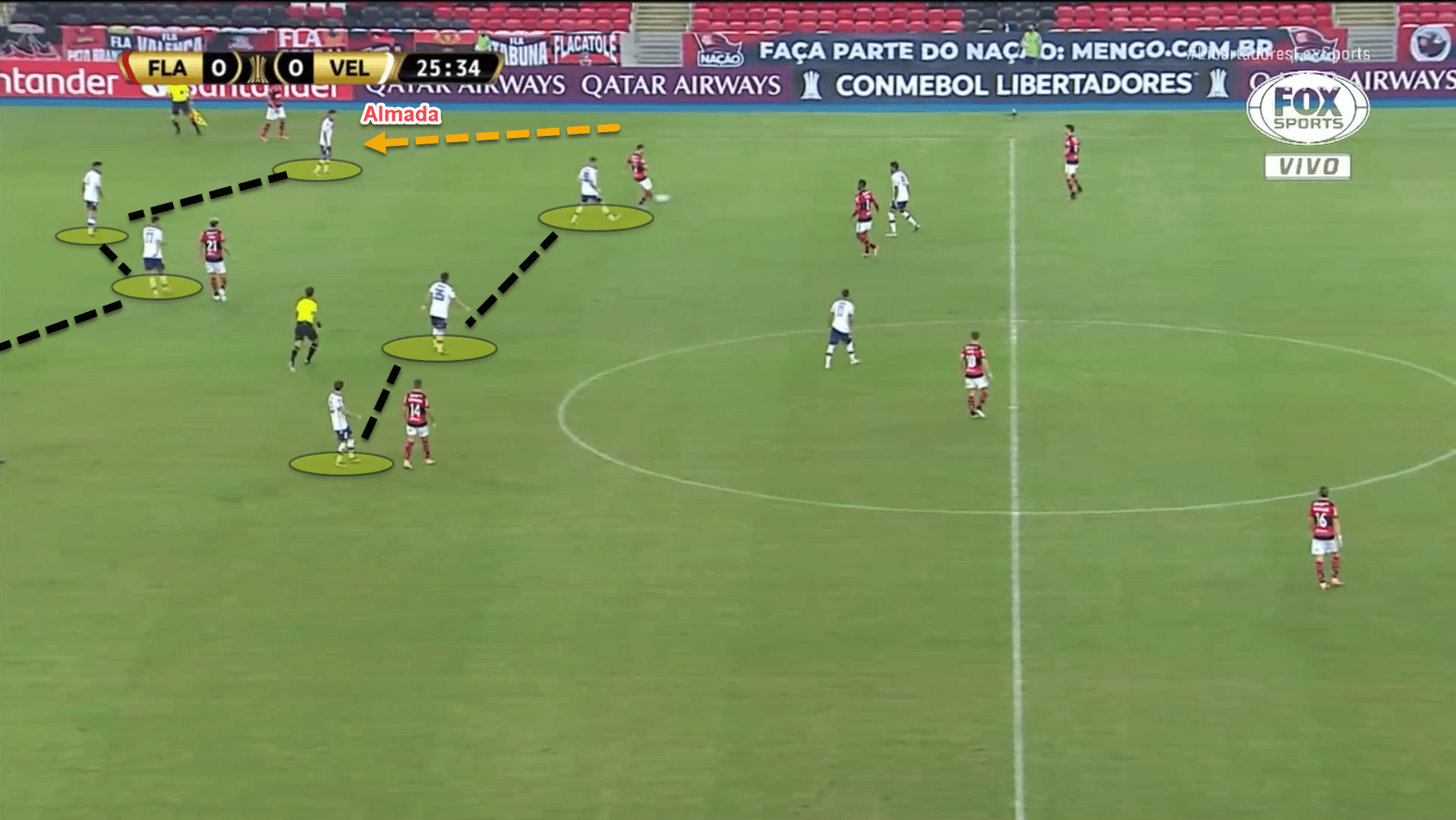 The midfielder is a manager’s dream as he is fantastic in possession but just as good out of possession and always presses high and gets stuck into defensive duels when he is looking to regain possession. 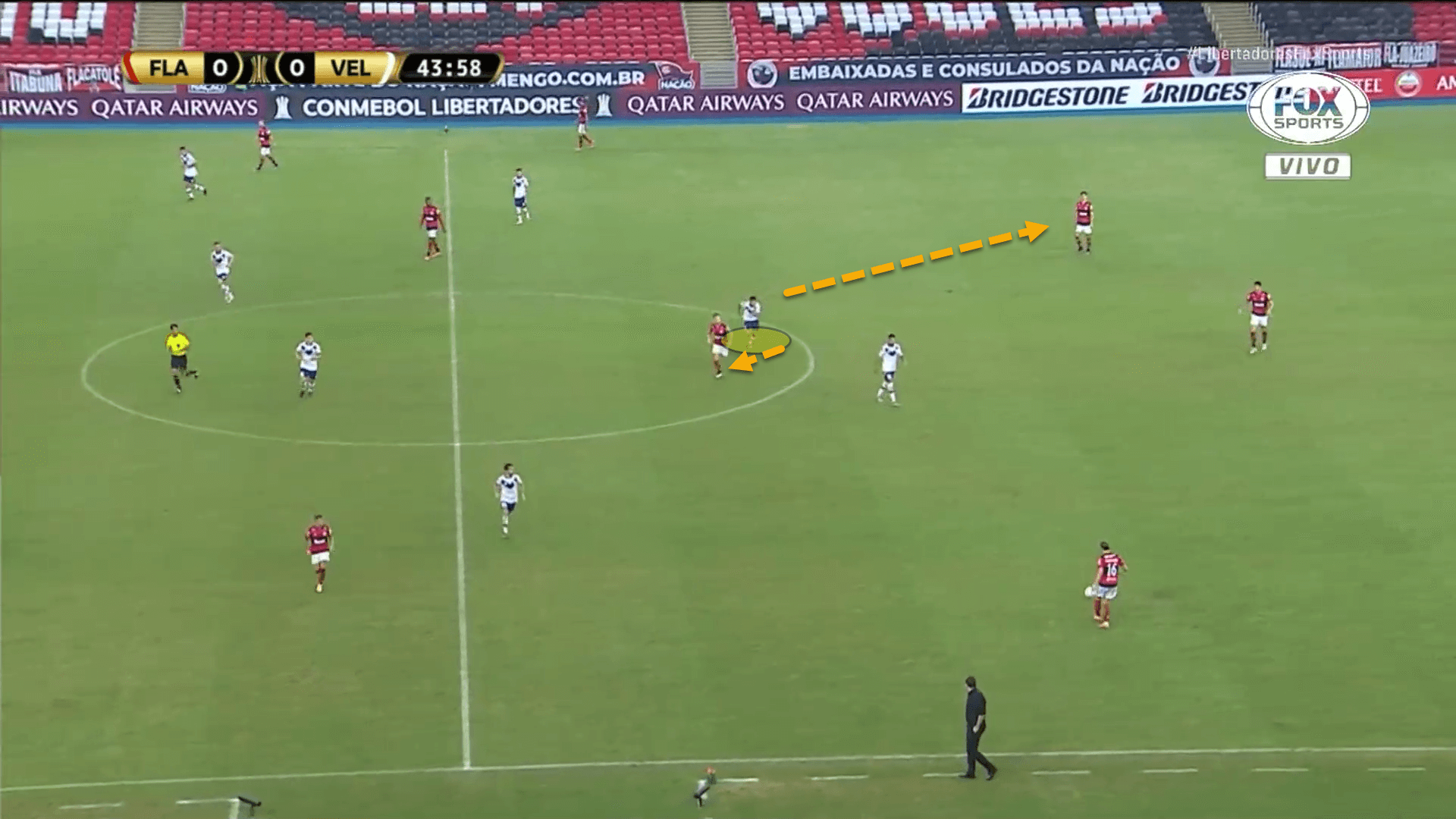 Here is another example of Almada showing his hard work and defensive nous. The Argentinian was occupying the role of a number ’10’. He was tasked, in this instance, with closing down the opposition’s single pivot and pressing the left centre-back simultaneously.

Almada was originally pressing the left central defender of the opposition but as soon the ball was shifted out wide, he darted back to mark the pivot player and prevent him from receiving.

Almada is good enough to play in a European league. Perhaps he is not quite ready to play in a league such as the Premier League or La Liga, or even Serie A, but certainly a high-profile league where he can develop such as the Eredivisie or potentially Liga Nos.

Nonetheless, the MLS is a rapidly developing league and could be a really good stepping stone for the 20-year-old to make a name for himself before eventually moving to a top European league.