A win or draw was all City needed to clinch their spot in the knockout phase, whereas Shakhtar looked to position themselves for the all-important final group stage game against Atalanta.

Though City would have preferred a win for the home fans, the 1-1 draw helped both teams achieve their round five objectives. City are through and Shakhtar are a home win away from advancing.

In this tactical analysis, we’ll look at the tactics used by Pep Guardiola and Luís Castro. The analysis will look at how City attacked Shakhtar’s low block, how each side prioritized their right side, and the use of long diagonal passes to break lines.

With Sergio Agüero picking up a thigh injury against Chelsea, Guardiola gave Gabriel Jesus the start up top with Raheem Sterling, Kevin De Bruyne, and Bernardo Silva playing behind him. Ilkay Gündogan and Rodri Hernández operated as holding midfielders, typically starting just behind Shakhtar’s line of four attacking midfielders. Angeliño played a more conservative wing role while João Cancelo routinely joined Silva and De Bruyne higher up the wing. Fernandinho joined Nicolás Otamendi at the back with Ederson in goal to round out the 4-3-3.

Castro’s side set out in a 4-1-4-1 with Andriy Pyatov in goal and the quartet of Dodô, Sergey Krivtsov, Mykola Matvyenko, and Ismaily forming the backline. Taras Stepanenko was the lone pivot, tasked with stepping into the half-space as City played high up the wings. Viktor Kovalenko and Alan Patrick played in front of Stepanenko with Yevhen Konoplyanka on the left and the pacey Mateus Tetê on the right. Júnior Moraes was the lone forward, operating in a target role.

If you’ve watched City play over the past couple of years, you’re aware they like to overload the right-wing with Silva, De Bruyne and the right-back (Cancelo filled that role in this game). Shakhtar knew they had to counter City’s right-overload, so they lined up in a 4-1-4-1, tasking Stepanenko with overload coverage. As the City attacker, particularly De Bruyne, made their way into the right half-space or wing, it was Stepanenko’s responsibility to go with him. With the extra midfielder checking into that space to provide support, Shakhtar effectively countered City’s overload.

When Stepanenko was unable to track the runner into the wing, the nearest midfielder would go in his stead with Stepanenko usually sliding into a central role in the line of four midfielders. As City built up on the wings, Stepanenko generally positioned himself in the half-space nearer the ball. If City quickly switched the field of play, the two far-sided midfielders had plenty of time to recognize the need to drop in.

This is a perfect example of the way Shakhtar wanted to counter City’s right-sided overload. As Sterling receives the ball out wide, David Silva makes a run into the wing. Stepanenko left his space between the lines to fall in with his backline and track tracked the run of Silva.

When City overloaded the right and unbalanced Shakhtar on the left, Stepanenko’s position in the right half-space kept him from sliding into the backline. However, Konoplyanka was the nearest midfielder, so he took on that role while Stepanenko and Patrick complete the line. That movement allowed Shakhtar to defend in a 1-5-4-1, which is exactly what they wanted.

As the average starting points indicate, the game was played in Shakhtar’s defensive half. City committed numbers high up the field, attempting to get numbers in the box and create from the half-spaces. You can see the close proximity of De Bruyne, Silva and Cancelo in the right half-space, as well as Jesus, Sterling and Gündoğan on the right.

City looked to move three of four Shakhtar players away from the middle before sending a cross to the other three attackers. Many of the crosses targeted the back post with in-swinging deliveries. On the day, City sent 29 crosses, completing only 7, which is good for a 24% mark. As the game reached the late stages, the balls into the box seemed more hopeful than dangerous.

As City looked to create from that right side, De Bruyne and the left-footed Silva generally looked to play to the back-post or behind the back-line. In several instances, Sterling and Gündoğan attacked the back post with Jesus looking for the central second ball.

Shakhtar prioritized the middle, forcing City to play around the defence before coming back inside. Here City played to Angeliño, who sent the ball wide to Sterling.

At the moment he sent the hopeful cross, you can see that Shakhtar was well-covered in the middle. Defenders had the track on the attackers and Shakhtar had numbers available to provide coverage for runners and rebounds.

On the right side of the field, which is where City directed the highest percentage of their attacks, Bernardo whips in an in-swinging cross, but, again, Shakhtar had the numbers and size to take away dangerous lanes to goal.

On Shakhtar’s side of play, counterattacking on the right was the mode of attack. Utilizing Tetê’s pace, Shakhtar looked to win possession, get the winger high up the pitch and play him into space. The City defence couldn’t run with him. The difficulty in generating opportunities from that tactic is that Ederson is among the best in the world at cleaning up direct play. His willingness to step forward and play with his feet was a huge plus, even if he did have the one gaffe (more in a moment).

51 of Shakhtar’s 69 recoveries came deep in their end. With Moraes playing as the lone forward, few outlets were available high up the pitch. Rather than playing Moraes right away, Shakhtar looked to rondo around the City press for a few seconds to buy Tetê time to get forward. Even though they were able to test the City defence through Tetê’s runs, goal-scoring opportunities were difficult to come by as Shakhtar only managed to produce an xG of .99. To their credit, they made it count and managed to contain City’s attack.

Playing with Bernardo and Sterling high up the pitch, the long diagonal was always on for City. In fact, that was frequently the best option for progress. With Shakhtar often committing 10 players to the centre-channel and half-spaces, the high and wide players were safe options. As we discussed, City enjoys overloading the right side, so the tactic suited City well.

Even though they managed to get the ball high up the pitch with desirable numbers, they simply didn’t have the impact we’ve come to expect. They produced 15 shots, seven of which were on target, but they were mostly half-chances. That’s evidenced by their 1.54 xG. With Shakhtar looking comfortable sitting deep and defending against crosses, City looked out of ideas, forcing predictable crosses into numbers-down situations. Agüero’s cunning movement was sorely missed.

Let’s analyze some concrete examples, starting with the visitors. As Shakhtar built up in the first half, you could see they wanted to free up one of the centre-backs, Matviyenko in this example, to send a long ball to Tetê. Given Tetê’s pace and City’s narrow, high defence, there was always room to play the winger.

After Ederson, who’s highlighted at the top of the picture, whiffed on his clearance, Tetê cut inside, took a prep touch and directed a shot on goal. Thanks to the extra touch, Fernandinho was able to recover in time to save a goal.

On Shakhtar’s goal, you can again see them targeting Tetê out wide. He drives inside, opening the overlapping run for Dodô. As this is happening, Moraes drives the centre-backs to the 6-yard box while the recently subbed on Manor Solomon runs of Cancelo’s shoulder before cutting to the penalty spot.

City frequently attacked on their right side as well. On their goal, De Bruyne received the ball on the right-wing and played Jesus in behind the line.

Scrapping for possession, Jesus regained control of the ball and poked it on to the untracked run of Gündoğan, who manages to direct a shot just inside the near post.

Shakhtar’s ability to take away the central channel and produce an effective response to City’s wide overloads secured the result. While they didn’t have many chances, Shakhtar took the one they were given and earned a massive away point.

In the end, it’s a disappointing draw for City, but it’s not all doom and gloom as they clinch the top spot in the group with a game in hand. Guardiola’s men will look to rebound from this result as they head north to play Newcastle on Saturday.

For Shakhtar, they’ll look to extend their undefeated league season, and +37 goal differential in 15 games, on the road against mid-table side Mariupol. 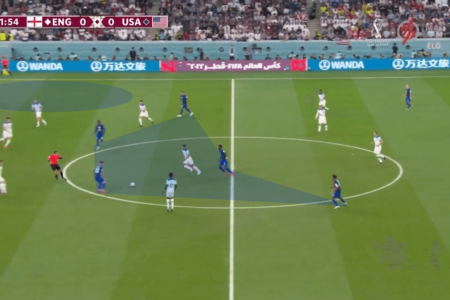 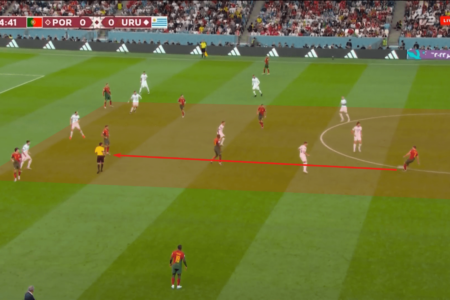