Liverpool needed just a point to all but guarantee their progression to the next round in the Champions League. Though only a point behind group leaders Liverpool, Napoli were less comfortable and would need at least one more win from their final two games to seal their progression. You couldn’t imagine either side however looking for just a point in this game as top spot in the group was still within the reach for both teams.

It was Napoli however that turned up to disappoint, not only their opposition but the neutrals at home as well, as they put in a rigid display against the home favourites. The game played out to a 1-1 draw on the night as Liverpool struggled to create quality chances against a stout defence led by Kostas Manolas and Kalidou Koulibaly.

This tactical analysis will detail the flows of this epic clash between these two European heavyweights and illustrate the outcomes of both team’s tactics. Our analysis will also explain just how Napoli were able to contain this Liverpool offence that has looked almost unstoppable in recent seasons.

Lorenzo Insigne missed the game on an account of a “bruised elbow” amongst other ugly rumours that he had fallen out of favour with the club’s president. This meant that there was a position on the left-hand side that needed to be filled, and so it was by the Polish international, Piotr Zieliński. Carlo Ancelotti rolled his side out in a 4-4-2 formation which opposed the 4-3-3 formation that Napoli had almost perfected under Maurizio Sarri. 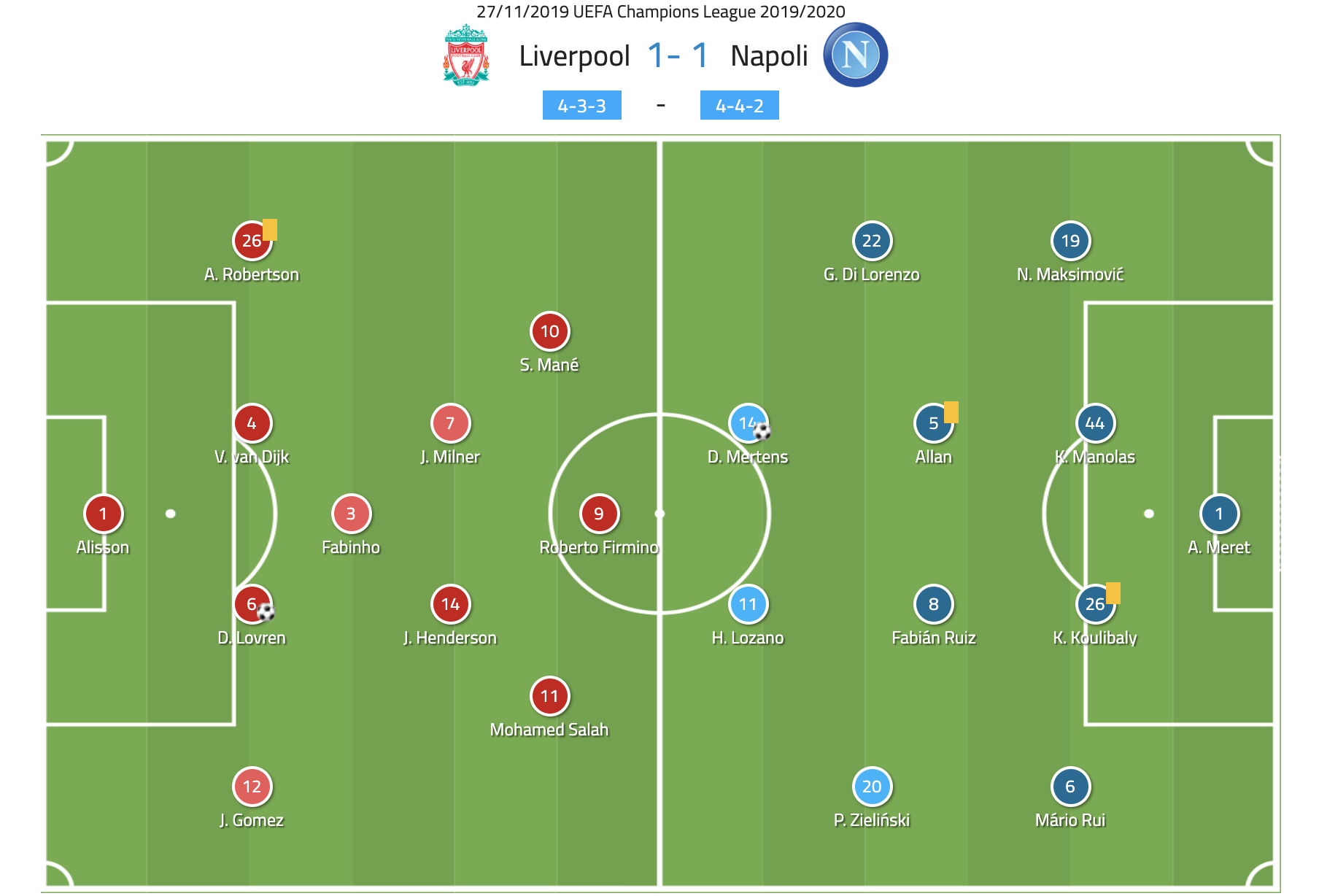 Napoli’s 4-4-2 was primarily used as a defensive tactic against Liverpool’s desire to commit large numbers of players to their attack. Napoli positioned themselves so deep within their own half when they didn’t have the ball that even Mertens and Lozano were no more than 10 or so yards away from their own penalty area.

During the offensive phase of the game, however, this prevented any single Napoli striker from being isolated against Liverpool’s centre-backs. Up against Virgil van Dijk and Dejan Lovren, any single striker would struggle to have an impact on the game. Playing as a two though allowed Dries Mertens and Hirving Lozano to play off each other’s movements and if at any point, they could get the ball behind Liverpool’s midfield, meant they could play in 2v2 and 1v1 scenarios.

Napoli’s style of attack also limited Liverpool’s opportunities to take advantage of their side as they transitioned into attack. The Italian side took their opportunities on the ball to play it early into the channels for Mertens and Lozano to chase after. Not only did this give Napoli’s strikers a chance to use their pace and dribbling ability to beat the stronger Van Dijk and Lovren in 1v1 scenarios, it also skipped over the midfield zones of the pitch where Liverpool might have been able to press the away team into making mistakes on the ball in their own half.

Both Henderson and Milner operated in interesting roles considering their central midfield positions. The two Liverpool eight’s averaged occupying wider roles than is usual for most central midfielders. The Englishmen were used so as to create overloads down the flanks for the Mersey side as Liverpool’s main method of attack came from crossing.

At times, Milner and Henderson were even in the spaces you’d expected to have seen Andrew Robertson or Gomez in. This triple overload down the flanks of the pitch often ensured Liverpool could get at least one player in a position to deliver a cross into the box.

What this meant, however, was that Liverpool’s game didn’t play to the strengths of their forward line or their system. None of Liverpool’s front three are particularly known for their ability in the air shall we say, especially not when up against the physically imposing centre-back pairing of Manolas and Koulibaly. 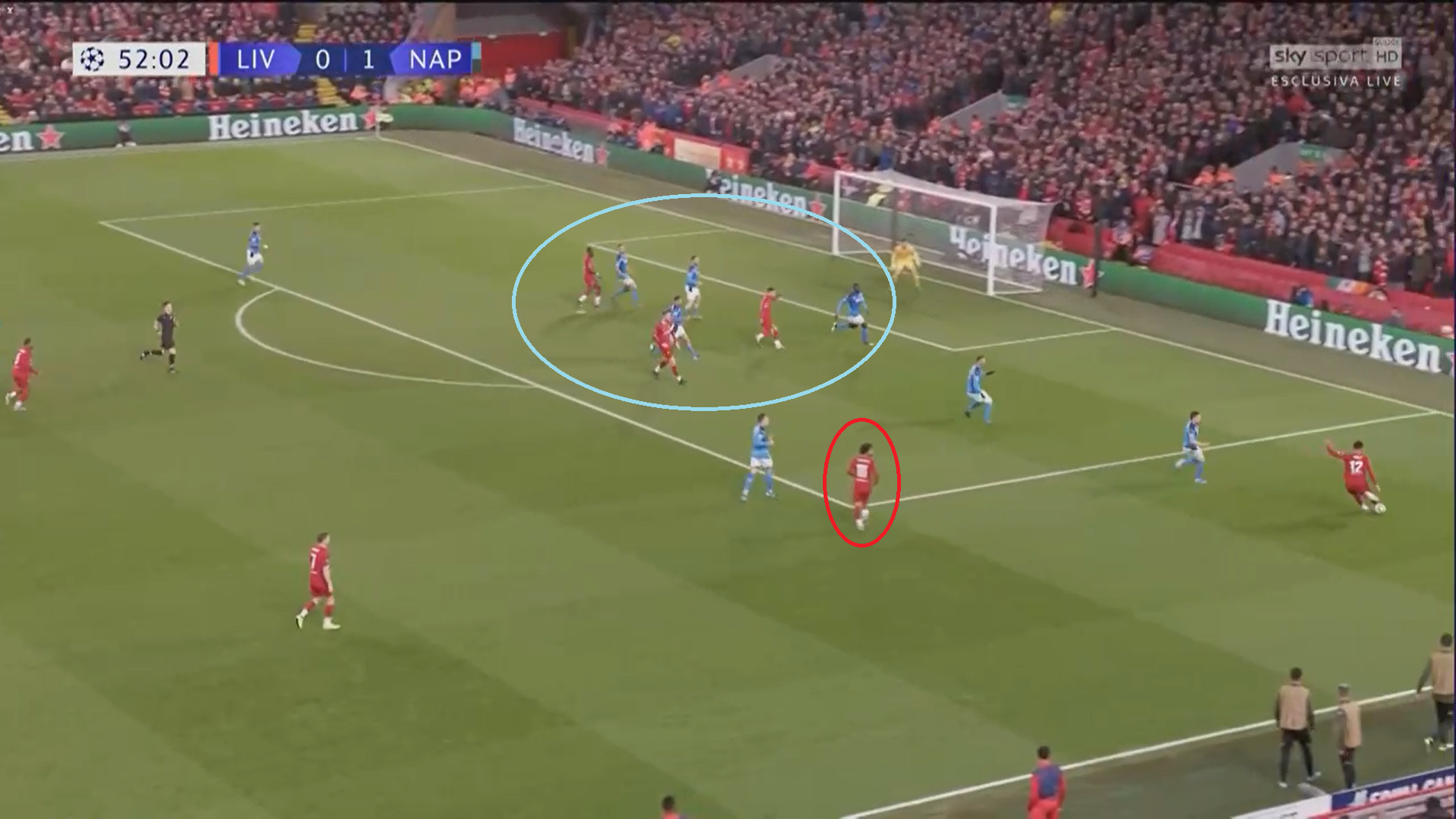 Liverpool’s attacks down the flanks and the resulting crosses rarely tested Napoli. Liverpool’s attackers aren’t physically imposing in the air and they’re outnumbered by the defence in a 3v4+1 situation and Salah has dropped outside of the box in search of the ball.

The wider positioning of the central midfielders, as well as the triple overload on the sides, also left Klopp’s side in a weaker position to attack second balls on the edge of the area. With the lack of occupation in the centre, this also removed Liverpool’s ability to counter-press the ball effectively. In a game where Napoli were dogged in their determination to defend in their compact 4-4-2, the transitional phases of the game were imperative for Liverpool in how they could break this shape down.

Without a reliable consistent presence in the centre of the pitch, Liverpool were rarely able to win the ball in dangerous areas in the final third. Considering Fabinho’s early removal from the game due to injury, the Reds lacked the steel in midfield to win the ball cleanly in areas where they could wreak havoc. Klopp’s side couldn’t take advantage of Napoli transitioning into their own attacks and opening up their defensive shape and because of this, they had to rely on a set-piece goal to earn anything from this game.

The home side also found it difficult to work any space for their wide men to do anything other than cross the ball into the box. In Milner and Henderson (later mixed in with Wijnaldum) Liverpool had a robust and serviceable midfield that had a specific role in this game however they lacked the dynamism and ball-carrying ability of Naby Keita and Alex Oxlade-Chamberlain (even when the Ox was bought on, he was used in a wide position to facilitate a formation switch to a 4-2-3-1 which I feel was a mistake). Having no dribblers in the centre of the pitch to attack and drive past Napoli’s midfield pair meant that the centre of the pitch was rarely threatened or challenged, meaning the entire defence didn’t have to squeeze so tightly that they left space on the flanks for Salah or Mane to drive diagonally into the box.

This one-dimensional offence from Liverpool didn’t attack Napoli’s defence where they were weakest and both Manolas and Koulibaly enjoyed relatively comfortable evenings away at Anfield. The lack of variation in Liverpool’s attack meant that the Reds hardly ever attacked an unbalanced Napoli defence and because of this, were only able to muster a relatively weak effort of five shots on target on the night.

Napoli weren’t exactly impressive in this game but yet they were able to do what they needed to do in order to nullify the Liverpool attack and earn a goal of their own. Liverpool, on the other hand, are quietly regressing to a less dangerous side overall and they will be worried about the condition of Fabinho going forward.

Liverpool are still a very good side but this game highlighted a weakness this side has in the continued absence of Naby Keita. The home team also missed Alexander-Arnold in this game and his service from the right but again this only highlights potential issues for the Reds if Trent were to suffer an injury.