Every team has a weakness. Even the greatest sides in history have all had chinks in the armour that can be exploited. The difficulty is first identifying it, and then being able to create and implement tactics to exploit those weaknesses on the pitch. Manchester City over the past few seasons have slowly reduced their frailties and transitioned into a near-perfect footballing side under the hand of Pep Guardiola.

Looking at the Man City team in full flow in recent seasons, it’s been difficult to pick holes in how to beat them. There are very few teams, bar Liverpool, who have enjoyed success against the current Premier League champions.

In this scout report, we look into the goals conceded by Guardiola’s men and using tactical analysis, attempt to identify areas of exploitability within their tactics.

Sifting through the numbers contained in the Premier League season reports, I came across an interesting typology chart depicting the types of goals each team has conceded. The types were split into four categories; long shots, counter-attacks, after set-pieces and direct FK’s and penalties. I used this as a starting point for the analysis and noticed a few interesting statistics in one of the charts, copied below. 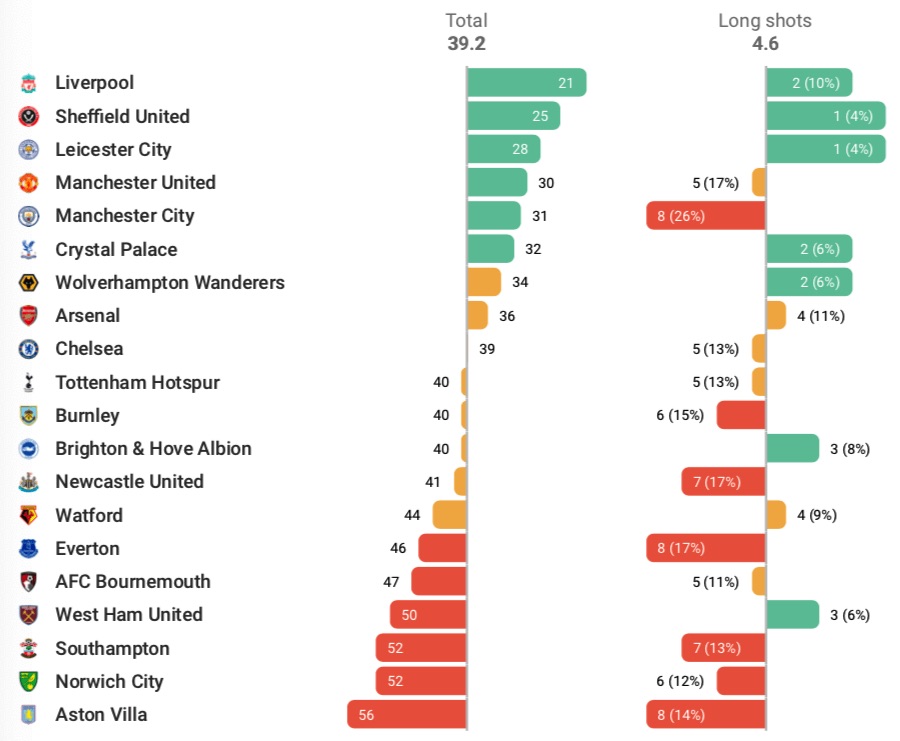 The graph on the left shows the total amount of goals each team has conceded and how this compares to the average (39.2 goals). As you’d expect Man City, though not the best, are below the average conceding just 31 goals in the season to date. The same rings true for the other charts; Man City fall below the average in all other typology groups, except for one: long shots.

Is there anything in this?

Following the analysis of the numbers, I moved onto looking at the long-range goals to see if there was anything behind Man City’s unusually high conceding rate from this type of goal.

I weeded through the eight goals and removed the ones that were obviously outliers and therefore unlikely to show any tactical weaknesses. This included a mistake from Edseron against Man United, allowing Scott McTominay to score from 35-yards and a stunning free-kick from Harry Wilson, which no keeper in the world could have saved. Below is an analysis of the remaining few which appear to show some tactical deficiencies.

The sequence leading to the goal starts with City looking to transition quickly into attack. On turning over possession, they attempt to uncoil like a spring in order to counter fluidly up the field. Benjamin Mendy immediately advances up the flank, maintaining width to create space in the developing attack. 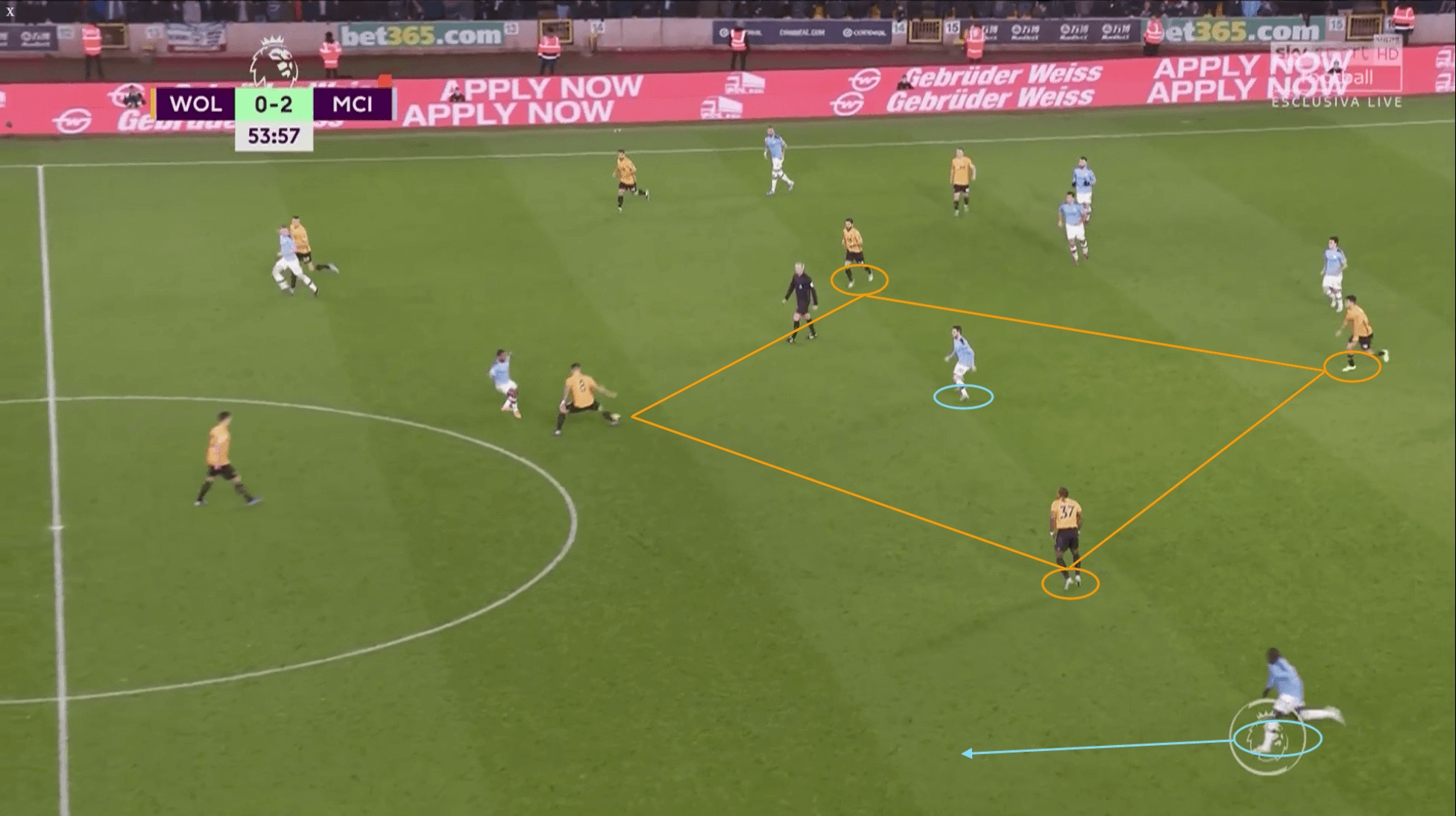 The problem situation occurs for City when they are counter pressed by Wolves, who have become masters of this trade. The Wolves players maintain their narrow positioning as they transition into their defensive phase, also highly concentrating the central zones in an attempt to re-turnover the ball.

Once successful we can see that the narrowness of Wolves has an immediate advantage over the expanding Man City shape. After making the interception the Wolves ballplayer now has open passing lanes through the lines of their opposition, as we can see above. 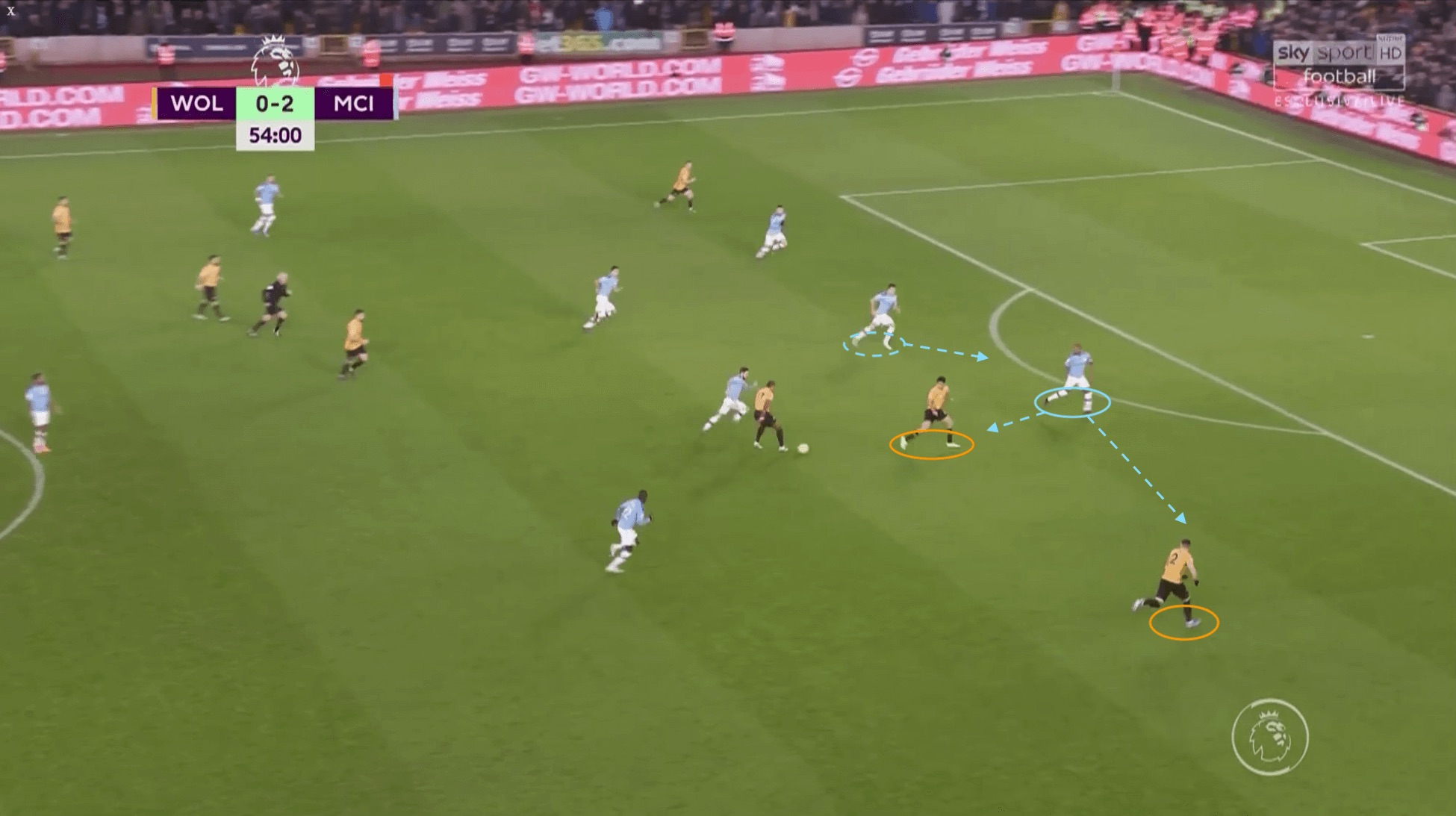 By quickly progressing the ball forward after recovering possession, Wolves put Man City in a difficult tactical spot. The West Midlands club have forced the City shape to skip from offensive transition to defensive transition in a matter of seconds, which is near impossible to do.

As a result, the Man City midfielders are playing catchup, attempting to recover the space sacrificed by their attack focussed transition. We can see above that Fernandinho has an overload on his side, being forced to square off his body shape in order to track the run inside of him whilst keeping an eye on the runner wide of him.

Where City fail lies with Nicolás Otamendi’s recovery position. He can see Adama Traoré advancing with the ball, being engaged by the defensive midfielder. He can also see his partner in trouble with two attackers to contain.  Despite this, the Argentinian is slow to get across to take Raúl Jiménez from Fernandinho, which would allow him to focus more on blocking the shot and covering Matt Doherty’s penetrative run. 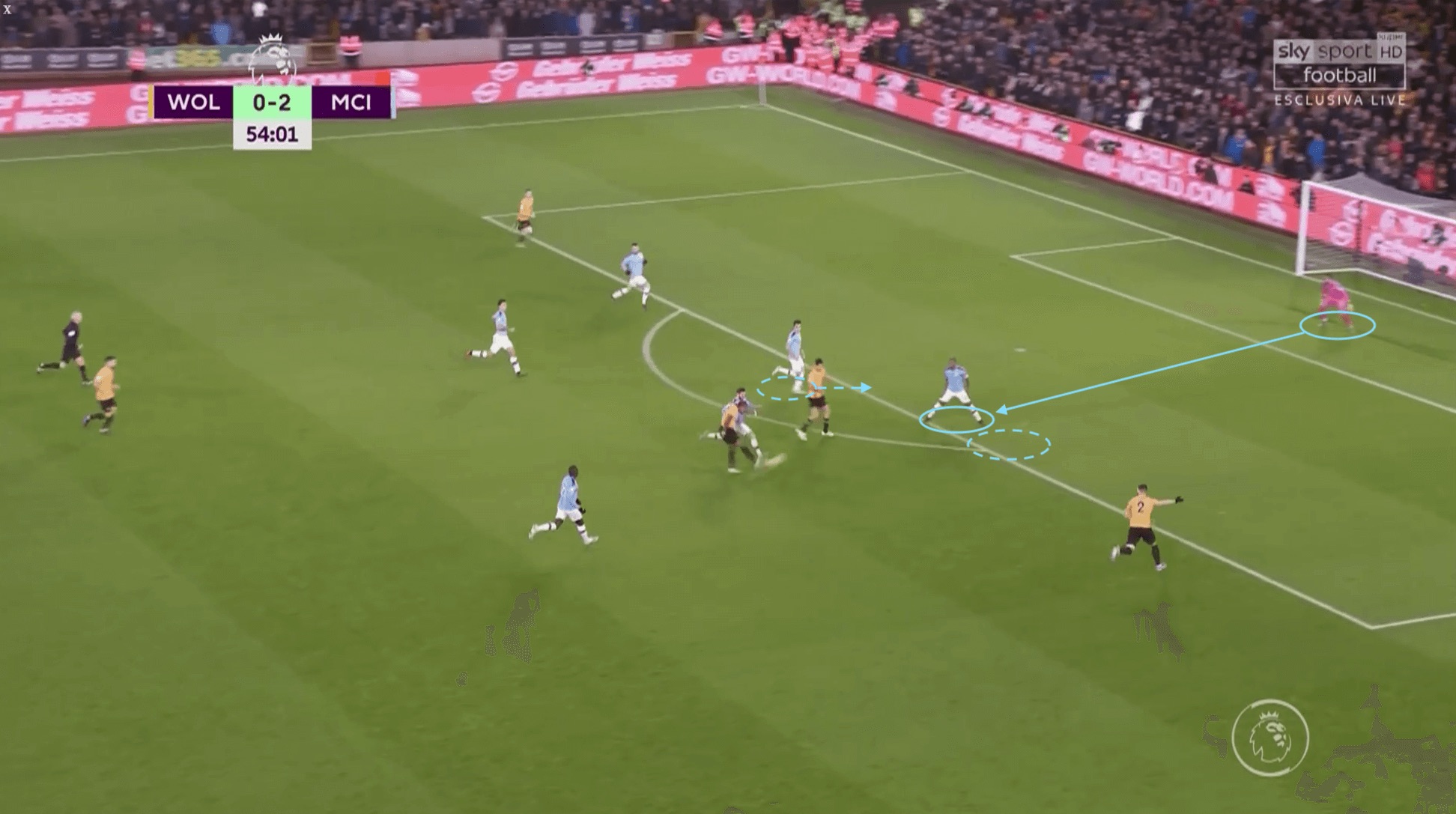 As a result of Otamendi’s positional fault, Fernandinho is forced to plant his feet and make himself as big as possible in a last-ditch attempt to block Traoré’s shot – as we can see above. In doing so, the Brazilian inadvertently blocks the entire view of his goalkeeper, leaving him stranded once the shot is taken. The delay in seeing the ball results in a late dive from Claudio Bravo and the ball in the back of the net from range.

Notice above how Otamendi’s position could have prevented the situation. A more proactive recovery run could have got him tighter to Jiménez, allowing Fernandinho to shift his body shape – giving Bravo sight of the ball. This small movement means the goal doesn’t overtly look like a mistake, but in the finer detail, we can see that Man City’s defensive transition was not quick or smart enough when it mattered.

The next longe-range goal comes from a different scenario but one that also could have been avoided. Newcastle have a dangerous direct freekick late in the game, situated on the right flank. 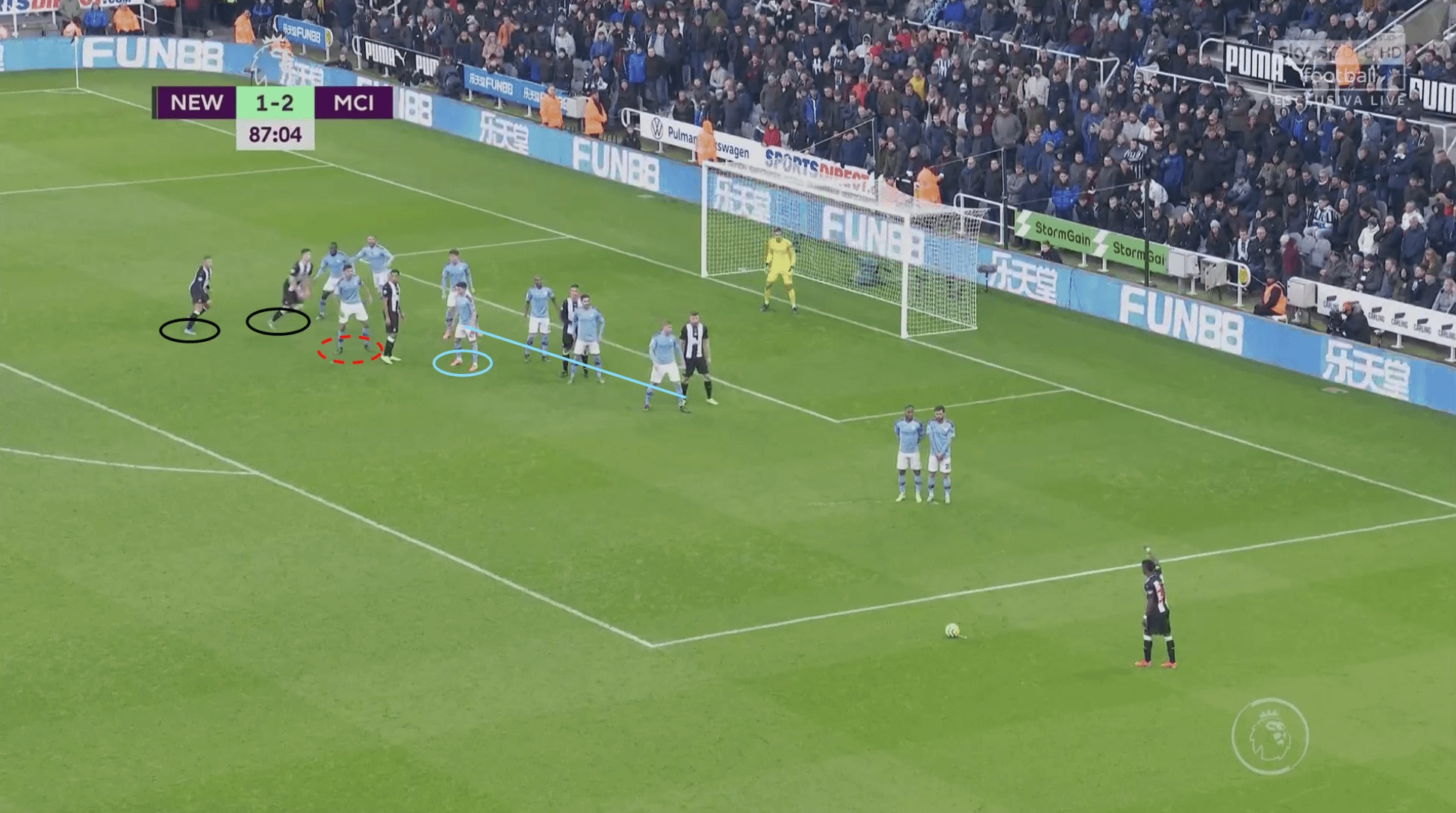 City have opted to defend the freekick using a hybrid of both zonal and man-to-man marking. The line indicates the zonal markers of City, evenly spaced across the six-yard box to attack any deliveries into these areas.

Towards the back of the penalty area (highlighted in black), Man City have gone man-to-man on the Newcastle centre-backs. These markers are used to track the opposition runs stride for stride to challenge any aerial threats. Notice in red, a Man City player who initially appears like a blocker to buffer any strong attacking runs. 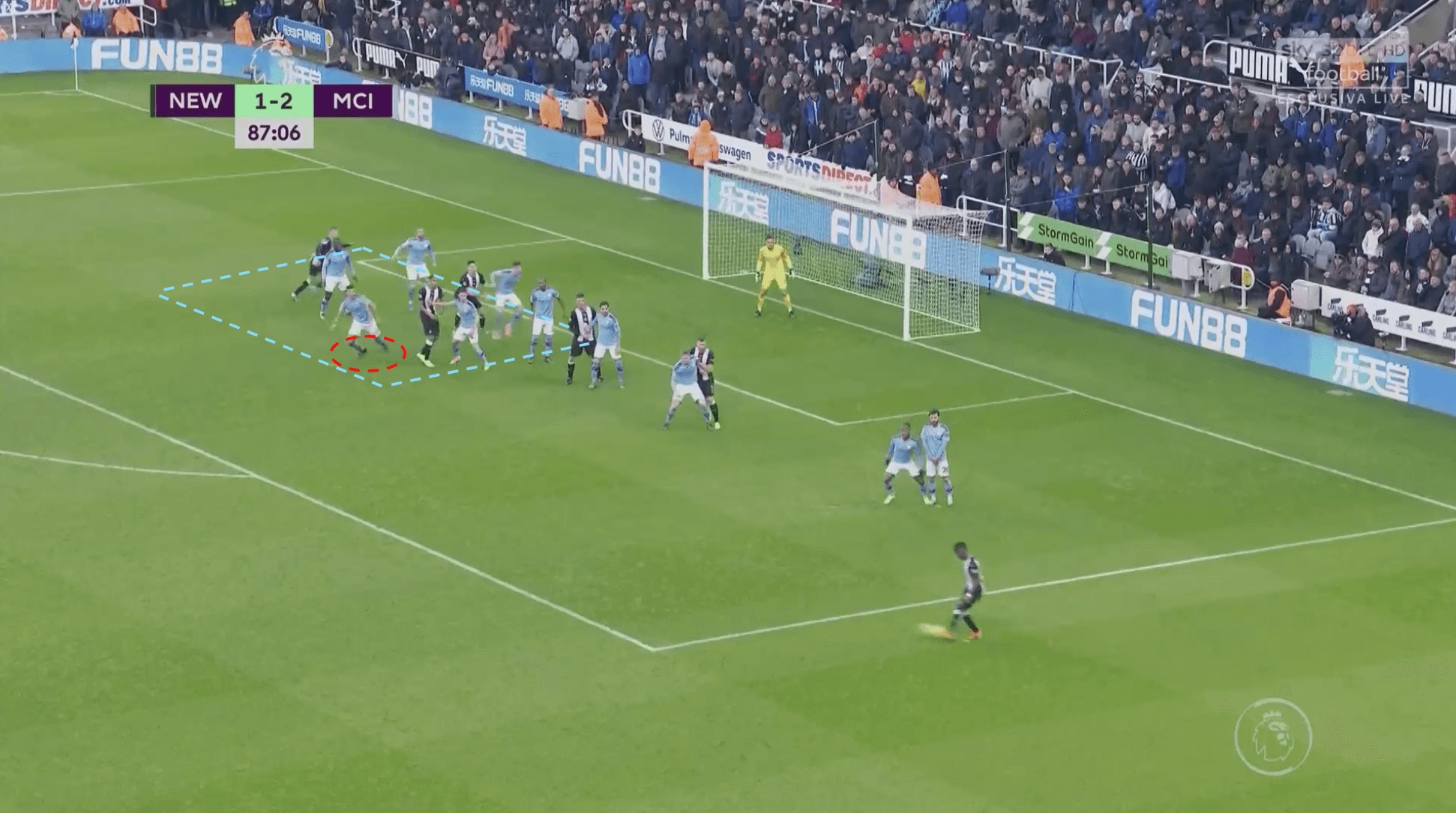 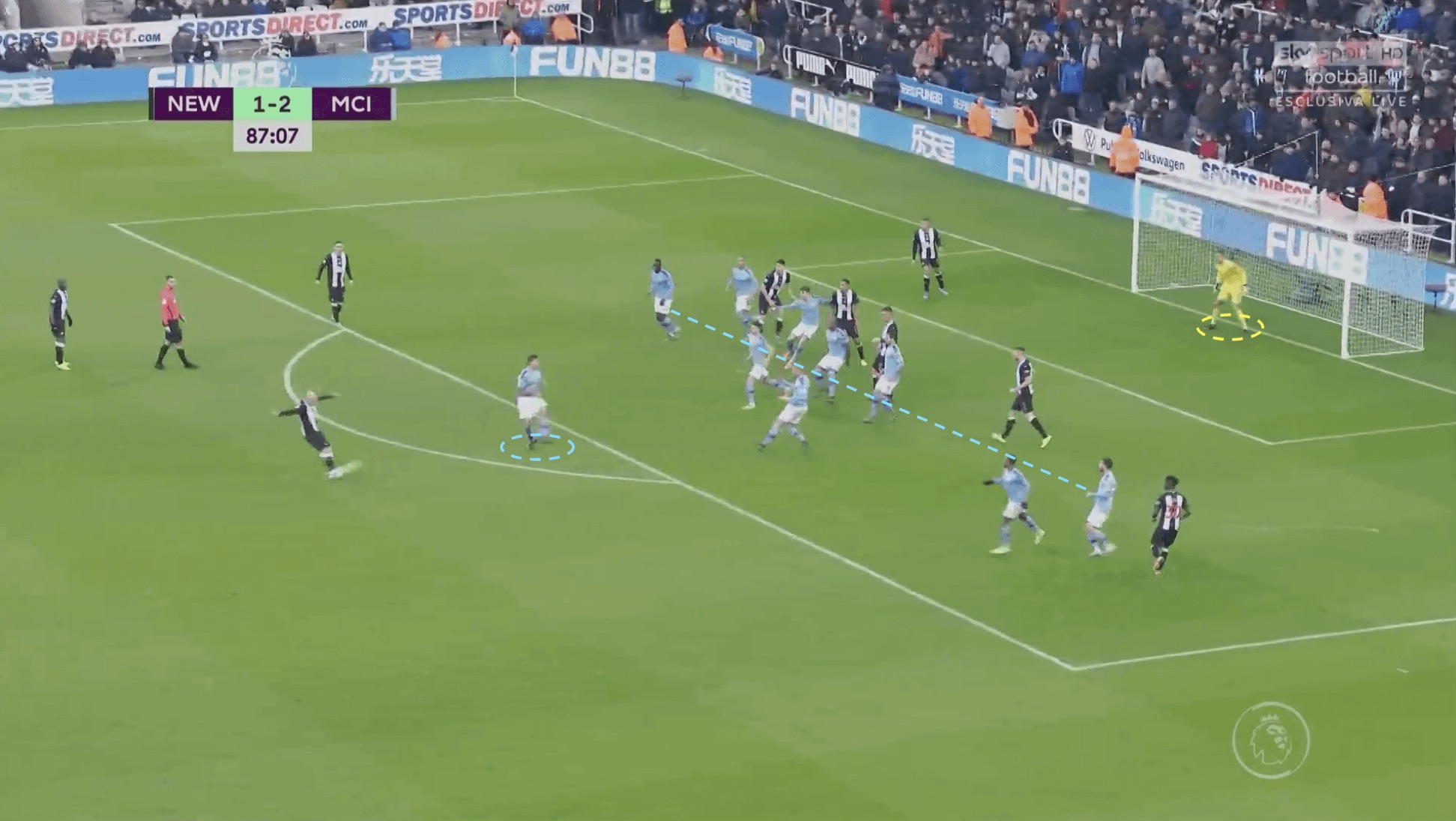 Newcastle comply and the ball is played to the edge of the box, where Jonjo Shelvey is waiting. Man City, having encouraged this option, push their line out well, reducing the risk of any clever angled passes into the Newcastle forwards. We can see how they would all be offside.

Having seemingly played the set-piece well, Man City have made one fatal error. The original positioning of charging defender was too deep and now we can see the consequence of this above. By the time Shelvey connects with the ball, the defender is still five yards from exerting any sort of pressure. In their attempts to encourage the pull-back pass, City have subsequently allowed too much time for the midfielder taking the shot. 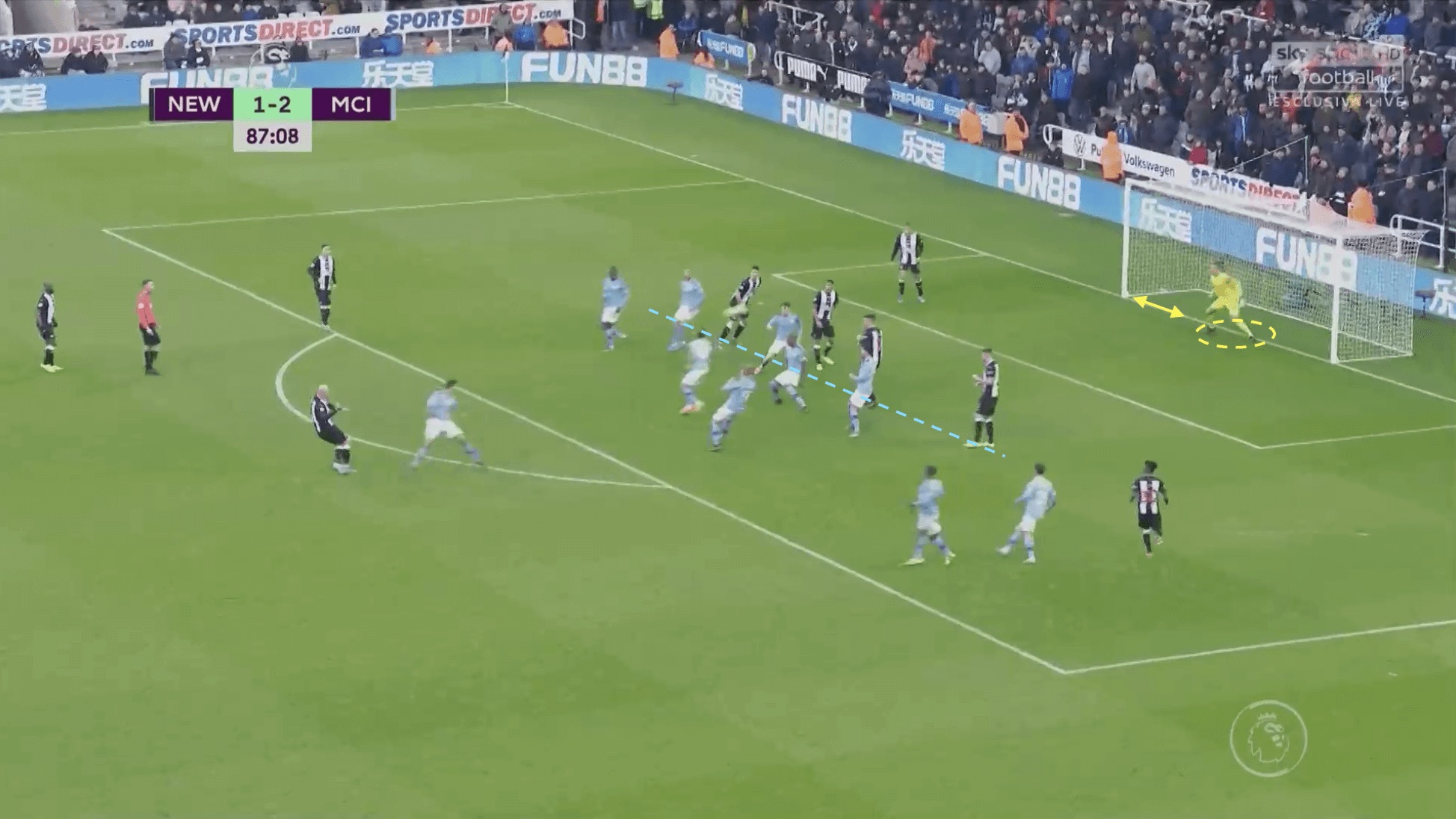 As a result, Shelvey gets his shot off cleanly through a host of Man City defenders. The goalkeeper is again unsighted due to the bodies pushing out in front of him and is forced to take a small step to his right to get eyes on the ball (compare last two pictures). This slight adjustment to the right delays the dive and also extends the coverage required to the far post. The distance is too far as Shelvey’s strike sweeps into the net.

With the strike yielding just 0.07xG, City may feel like they played that set-piece perfectly. In one sense they have prevented a cross with a potential close-range header yielding 0.25xG and reduced it to a shot with a mere 7% chance of finding the net.

However, I think moving their charging defender out a further 3-5 yards would still encourage the pull-back (the low xG play) but also allow him time to anticipate and block the shot. By letting the shot be taken unnecessarily, Man City run the risk (however small) of conceding, which is precisely what happened to the dismay of Guardiola.

The final scenario comes from the early crunch match against title challengers, Liverpool. The situation, as you can see below, is messy as Man City struggle to recover possession, and once they do, they cheaply give it away to Liverpool who have pressed their opponents high up the field. 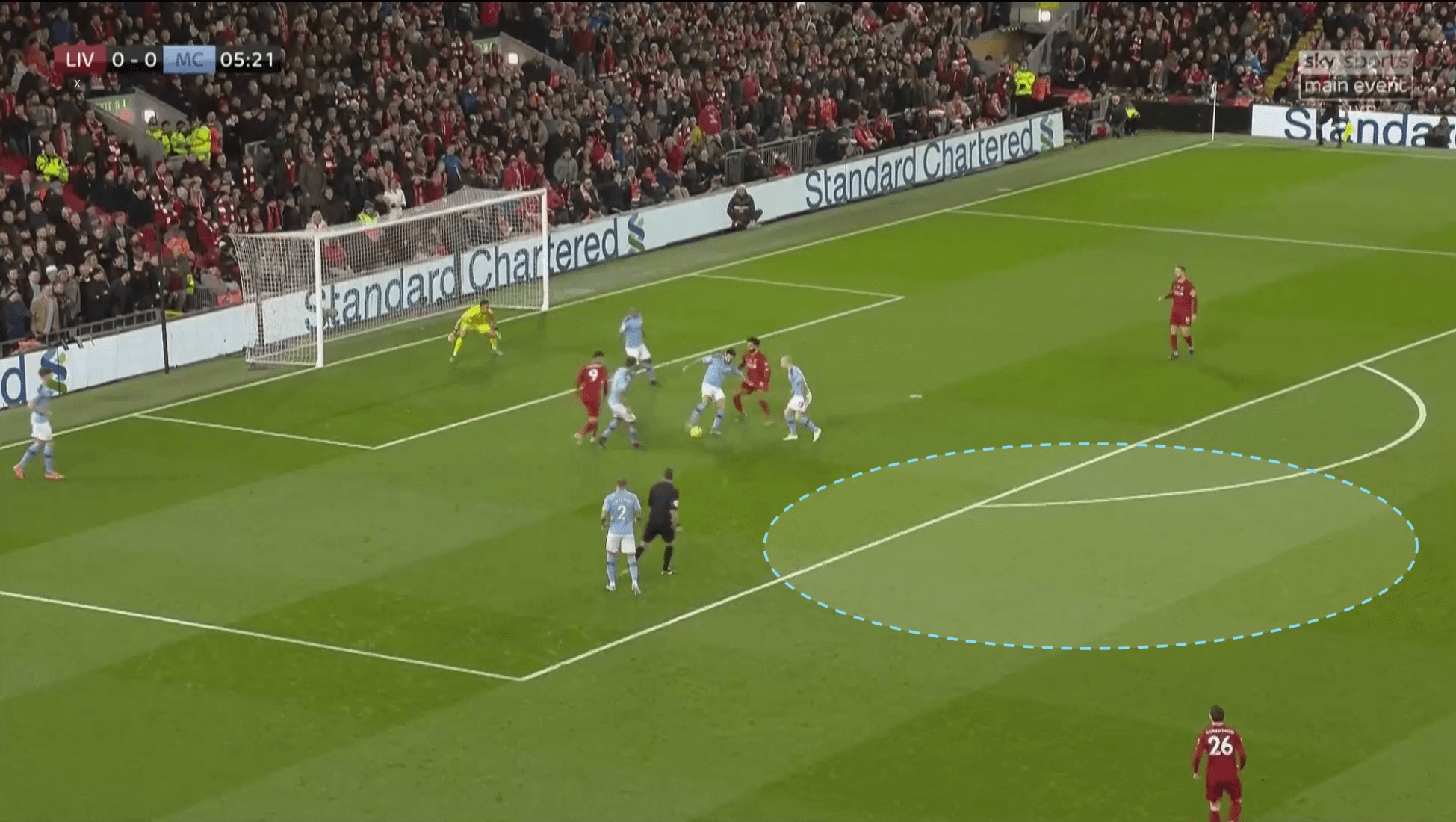 The City shape is in disarray and there’s no real semblance of control in this situation. That being said, mistakes are still made which led to the goal being conceded from range.

As the ball is given away on the edge of the area, Man City have to make fast decisions that require clear communication and immediate action – which does not happen. 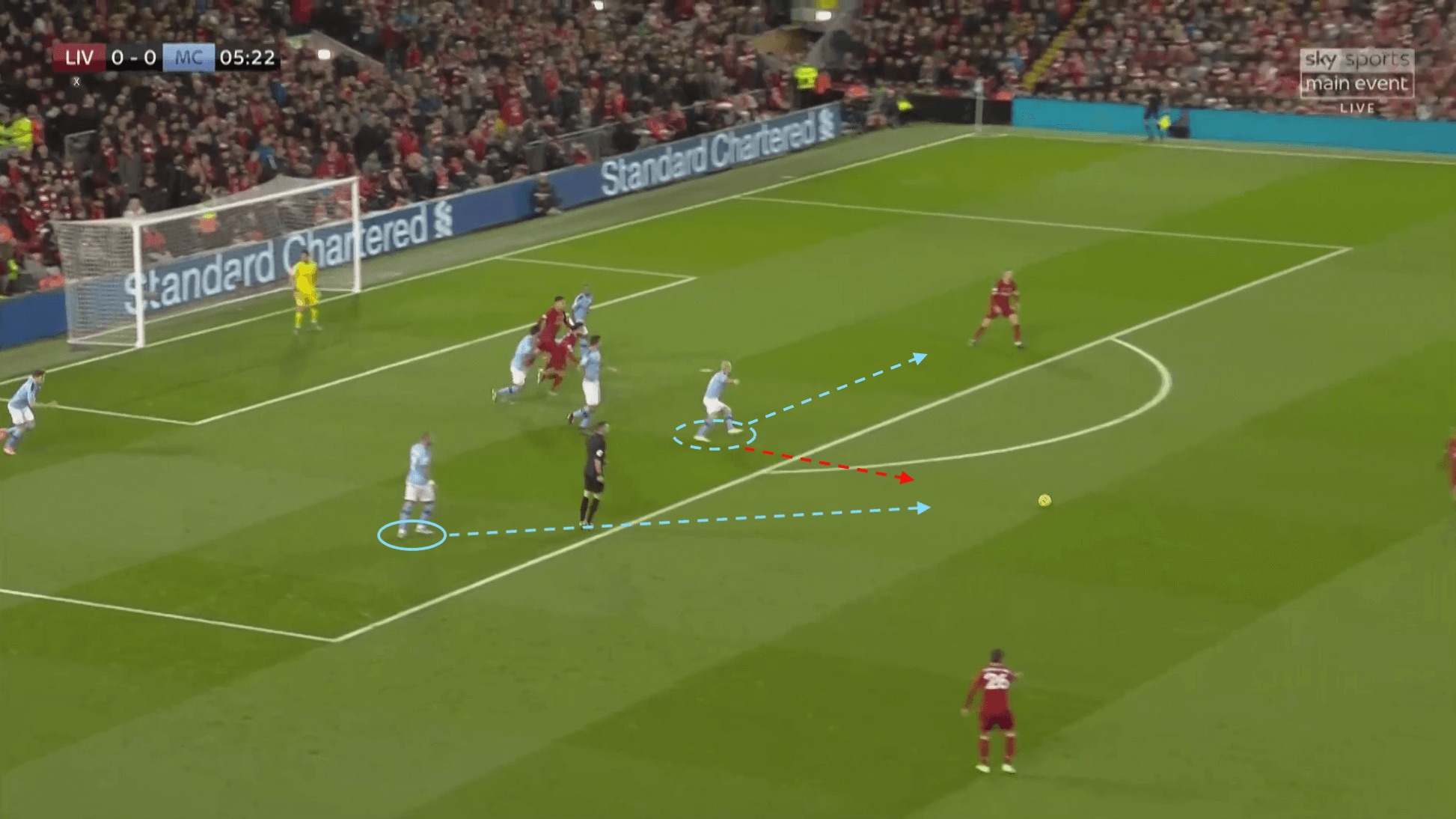 Angeliño is the player closest to Fabinho, however, he notices the player to his left is unmarked in the area. Instead of rushing Fabinho, the Spaniard makes the safe decision and contains the position, preventing a penetrative pass. Notice his body position and non-verbal communication, pointing to his teammates that he cannot go out, instead someone else must take responsibility. Kyle Walker (highlighted) is in the perfect position to do so. 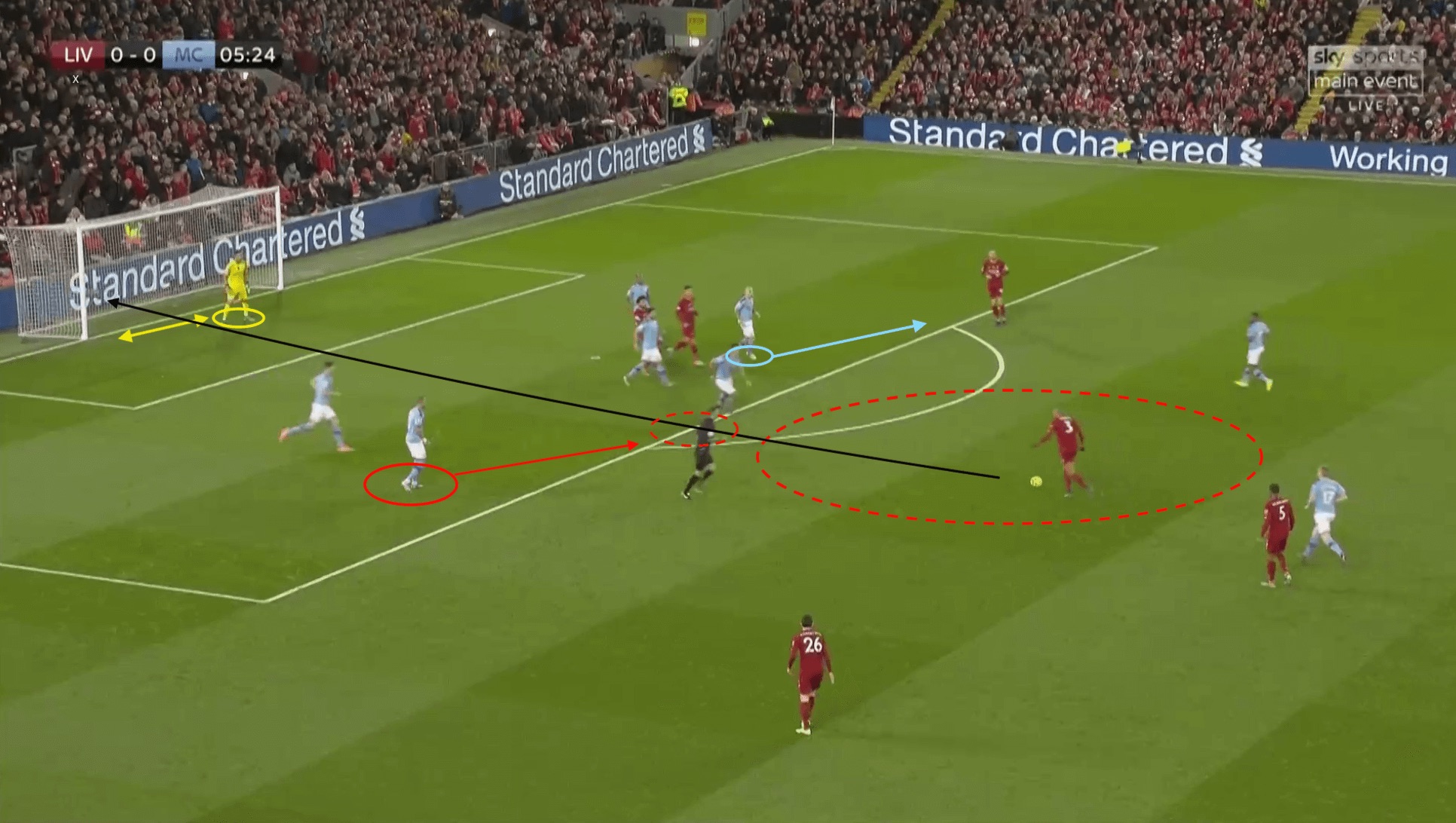 The communication between the defenders isn’t good enough, however, and Walker remains stationary as Angeliño moves into the lateral spaces to nullify the threat to his left. The lack of synchronicity opens up a clear sight at goal for the Brazilian, who takes the invitation.

Another compounding mistake is made by Bravo, who has taken up a position slightly left of centre. Whether this is a lack of readjusting from the Chilean following the scramble in front of him moments ago, or he’s deliberately over-covering the far post as that would be the natural curl imposed by Fabinho’s right foot, remains unclear. One thing is for certain is the space he leaves is too big and a large factor behind the 0.01xG strike finding the net.

Whether this is a specific weakness in the Man City set-up and that teams should try their luck from range against them remains unclear. What this analysis has shown is that Man City take tactical steps – risks even – to encourage a lower percentage move is undertaken by the opposition. By encouraging longer range shots, percentages dictate that more often than not, Man City will regain possession in the form of a goal kick.

Though on the face of it this sounds like a savvy tactic, when mistakes are being made in the lead up to these long-range attempts – which we have highlighted in the article – goals will be conceded. The goals conceded from range may not be an Achilles heel for the Premier League champions, instead a culmination of goalkeeping errors, xG variance and the added factor of encouraging more shots from range, all of which has led to the Blues conceding more than their fair share from distance.