Austin FC 2022: The tactics that have Austin challenging at the top of the MLS – tactical analysis

Austin finished the 2021 MLS season, their inaugural campaign in the league, with 31 points, 35 goals scored and 56 goals conceded. They finished 12th out of 13 in the Western Conference. This season, after 13 matches, they sit second from the top having scored 27 goals, just eight short of last season’s total, with 21 games still to play.

Coached by American Josh Wolff, who has previously worked under former EFL and Bundesliga player Gregg Berhalter as an assistant with the USMNT and Colombus Crew, Austin have a distinct, possession-based style of play.

This analysis will be presented in the form of a scout report focusing on Austin’s previous three matches versus Orlando City, LAFC and Real Salt Lake. In this tactical analysis, we analyze the key tactics behind Austin’s build-up play and the intricacies involved in their forward play to create space for Sebastian Driussi. 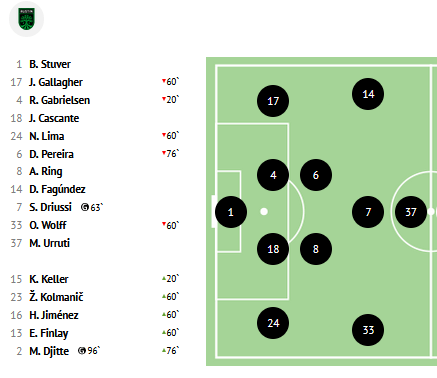 The above image shows Austin’s typical 4-2-3-1 set-up with the players they have used most in recent matches.

In their 13 league games this season, Austin have scored 27 goals. As we will analyse in a later section on their forwards’ movement, a large part of Austin’s goal-scoring success this season is down to the form of their #7 Sebastian Driussi. 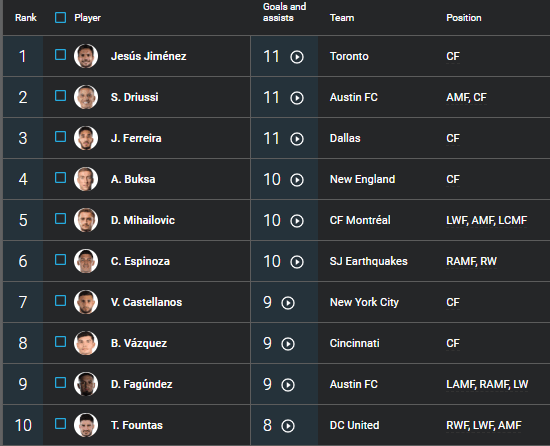 Another key to Austin’s successful start to the season is their number ’14’ Diego Fagúndez. The forward is ninth in the goals and assists chart with eight (one goal and seven assists). Austin are the only team in the MLS to have two players in the top 10 for goals and assists.

As a team, Austin are outperforming their xG in both attack and defence. Their actual goals scored, aided by Fagúndez and Driussi, is 8.61 goals better off than their team xG of 21.39. This is the highest overperformance of xG of any MLS team this season.

Austin’s 20.75 xG against, compared to their actual goals conceded (14), means they are outperforming their xG against by 6.75 goals. They are the second highest outperformers of xG against in the MLS this season.

Befitting with Austin’s perceived style of play as a possession-based team, they have had an average possession of 57% this season and are 4th for completed passes per 90 minutes with an average 431.26 of per game.

Whilst they have very much persisted with their style of play from the 2021 season, they have adapted by increasing the number of long passes they play. Last season they averaged 37.3 long passes per 90 minutes, whereas this season it has increased to 40.98 per 90. This moves them from 18th to 10th in the MLS long passes table.

One of the key features of Austin’s identity is their bravery in their build-up play. Austin will build out from the back even under an intense, high press by the opposition. This approach is not without risk. In season 2021, Austin conceded 13 goals as a direct result of their build-up play approach. This season they have fared much better. 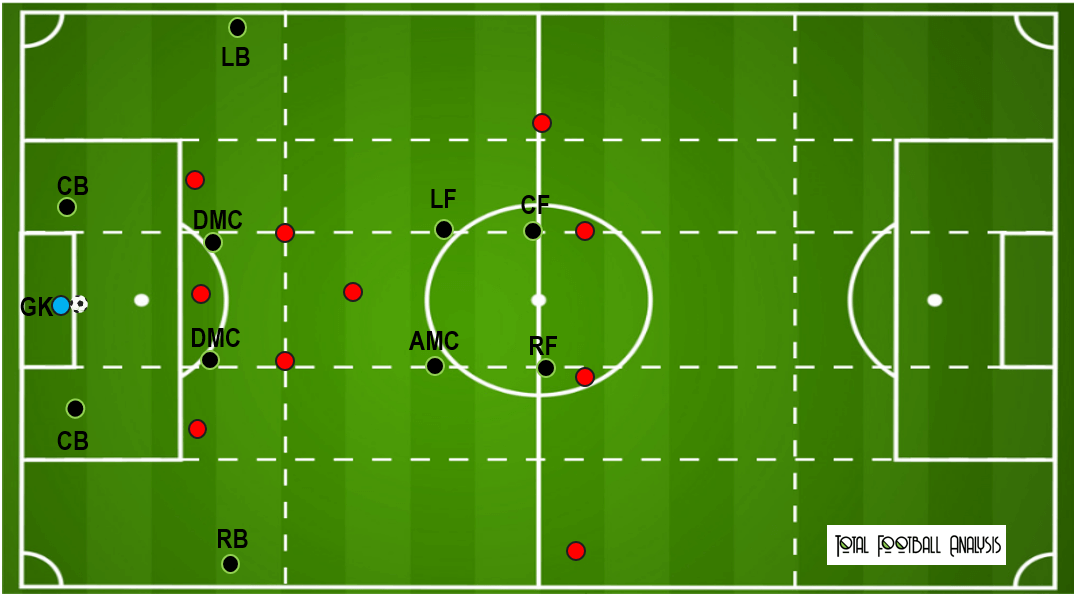 The above tactical diagram shows Austin’s shape (4-2-2-2) when building out versus LAFC’S high press. The idea appeared to be to draw the press of LAFC’s two attacking midfielders to free up Austin’s AMC and left-forward who both stayed high and central before receiving the ball. 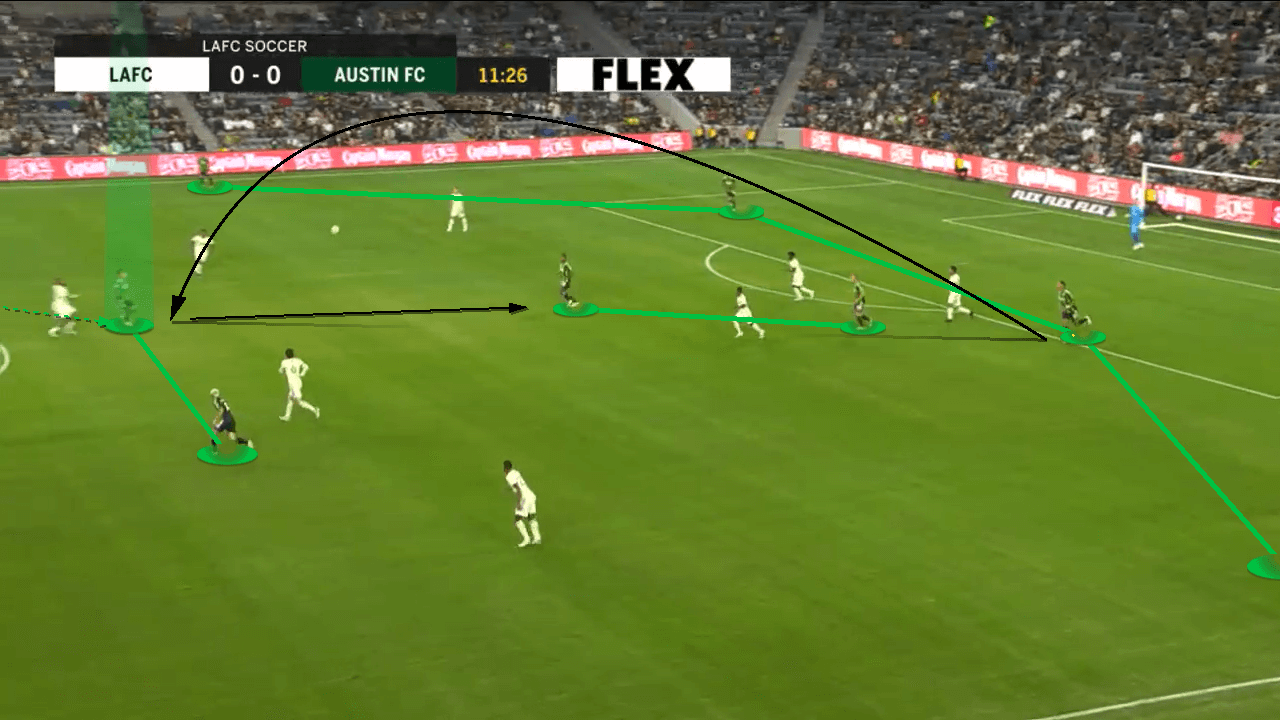 This is exactly what happened in the build-up phase which led to a corner and Austin’s opening goal. The above image shows the moment after Austin’s centre back has clipped the ball into the AMC.

The AMC, who is being pressed from behind by the LAFC centre back, then lays the ball back to his forward-facing DMC. The ball is played out to the left side before being played in behind LAFC’s high backline. 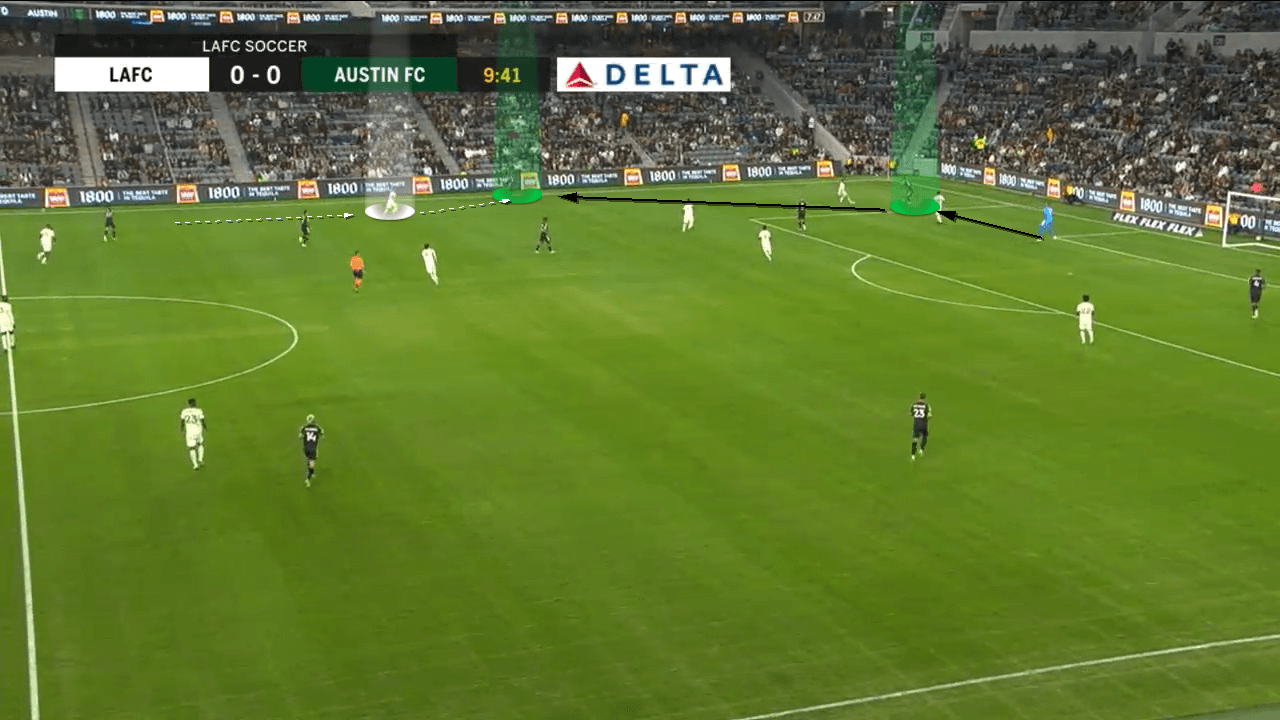 Whilst successful in creating the chance for Austin’s first goal, Austin also lost possession of the ball five times in their own defensive third in the first half of the match. As the above picture shows, this was down to LAFC pressing Austin to play down one side and setting a trap for Austin’s full-back.

As Austin’s goalkeeper passed the ball into one of his centre backs, the LAFC centre forward cut off the pass back to the goalkeeper whilst his left-forward pressed the centre back on the ball. LAFC’s attacking midfielders shuffled across the box to deny any forward pass into midfield. This left the centre back with only one available option, to pass the ball to his full-back.

As soon as Austin were forced down one side, this was the trigger for LAFC’s ball-near full-back to press high onto the Austin full-back and dispossess him. 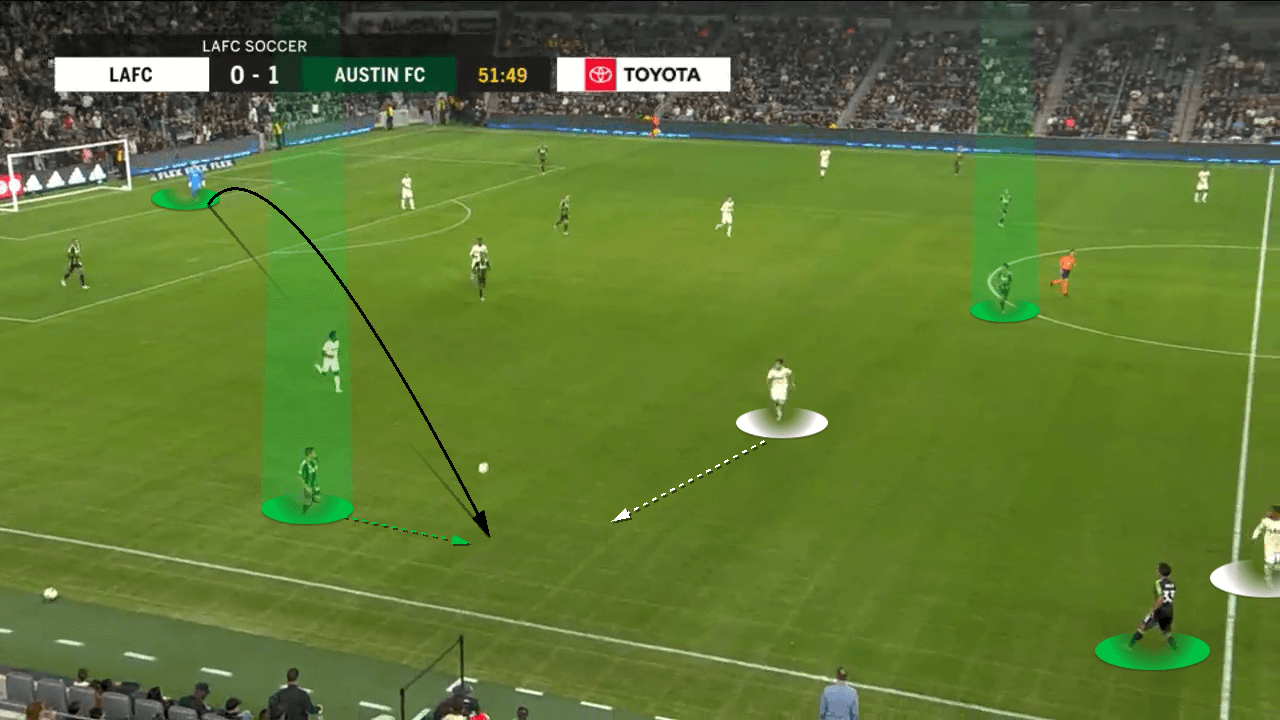 In the second half versus LAFC, Austin adapted their shape. The wide forwards began to position themselves wider in the build-up phase- on top of the opposition full-backs. This pinned LAFC’s full-backs and prevented them from pressing Austin’s full-backs. Austin’s goalkeeper was then able to clip the ball over the first line of pressure to his open full-backs.

Perhaps the most impressive part of Austin’s build-up play is the speed at which they regain their defensive shape when they lose the ball. The above image shows the moments after LAFC intercepted a pass into Austin’s defensive midfielder from his centre back and created a 4 on 3 attack.

Austin’s reaction is immediate with their defensive midfielder, number ‘8’ Alexander Ring, initially putting pressure on the ball to delay LAFC’s attack. This allows time for Austin’s full-backs, who are high and wide, to sprint back into position. By the time LAFC get a shot away, Austin have regained their 4-2 shape behind the ball with an additional attacking midfielder recovering to put pressure on the kick. 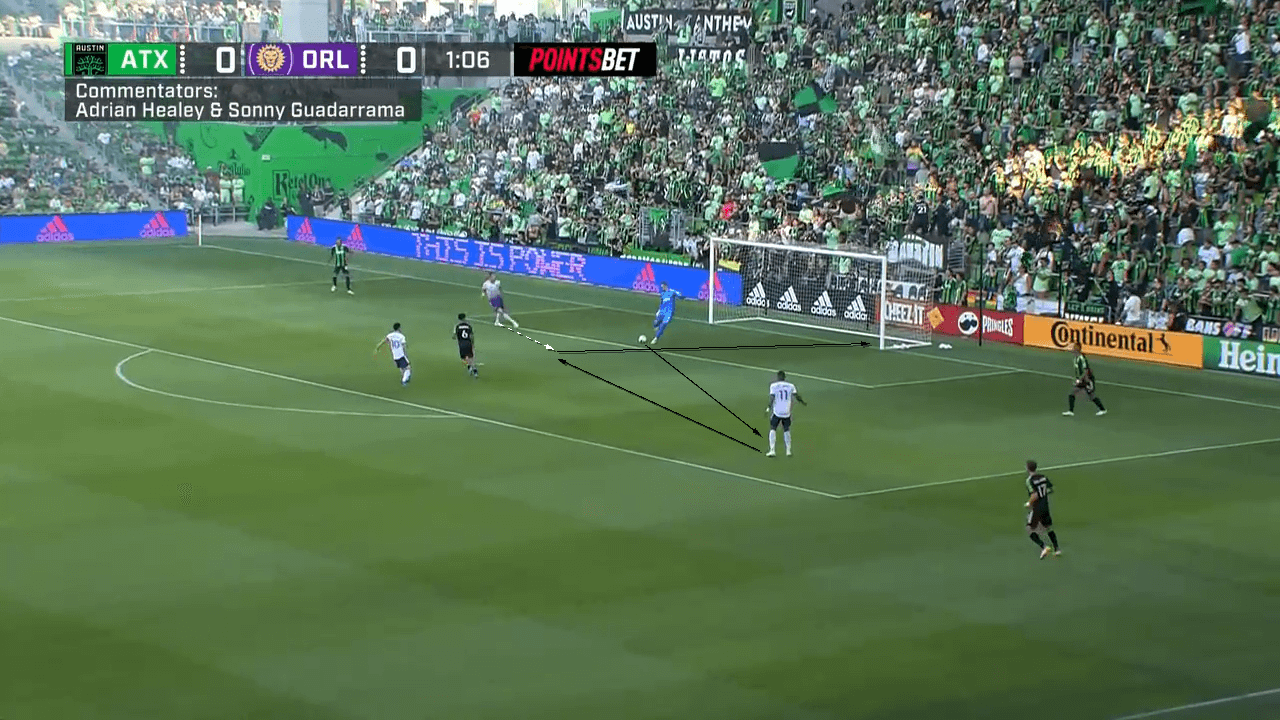 Although Austin have improved greatly from last season in their build-up play, it has not been without setbacks. The fragility of 2021 could be seen on Sunday against Orlando, albeit via a skill error rather than a tactical issue.

As the above image shows, a mishit pass from the goalkeeper, straight to the opposition forwards feet, saw Austin concede within the first 70 seconds of the match. Prior to this goal, they had not conceded from a mistake in the build-up phase since matchday 2.

As highlighted in the statistical analysis, number ‘7’ Sebastián Driussi, plays a key role for Austin in both scoring and assisting goals and many of Austin’s patterns of play are designed to create space for him to exploit.

This section is going to analyse these patterns that, in a true testament to the dynamism of the player, put Driussi in dangerous positions behind the opposition backline, as a target for crosses and for  switches of play. 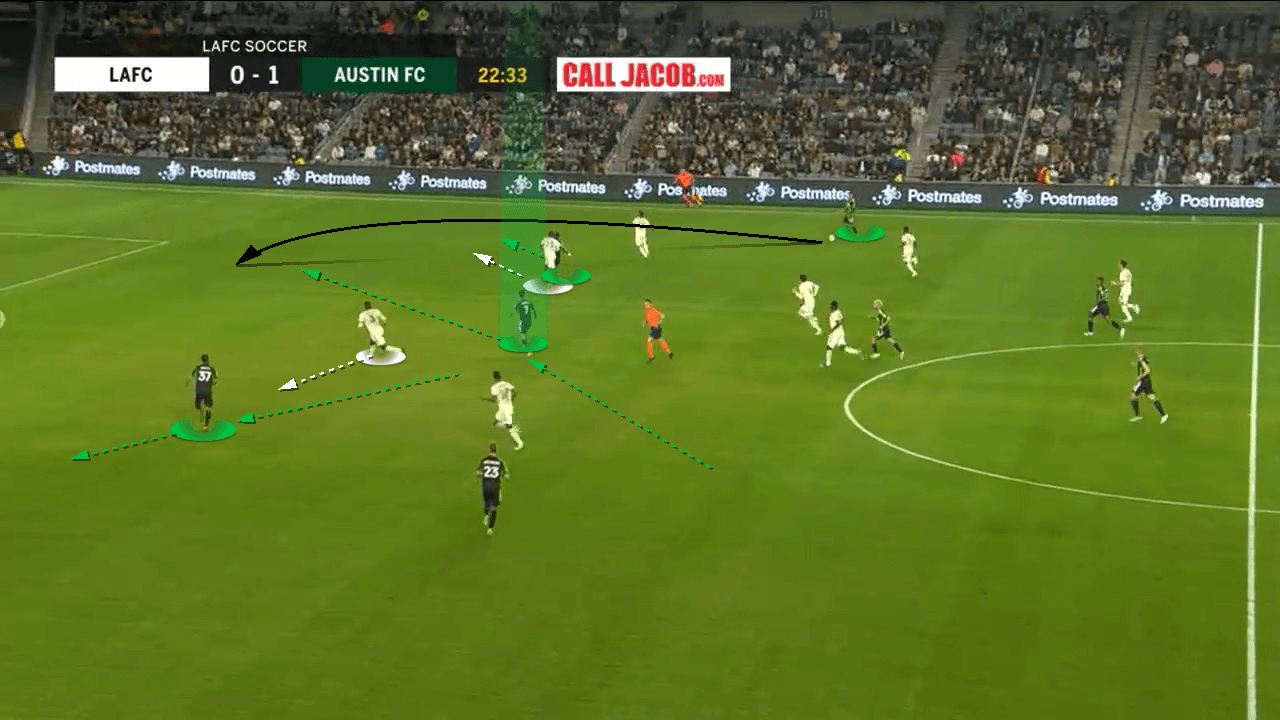 The above image shows Austin’s front three all moving defenders to create space for Driussi to make a run and receive in behind the opposition backline. Austin’s left forward had just received the ball in front of the opposition’s right back, drawing him out of position, before switching the ball to his own right back.

As the two centre back’s part, Driussi makes his run in between them to receive the ball in behind. Driussi then cuts the ball back to a supporting midfielder who has a clear shot at goal. 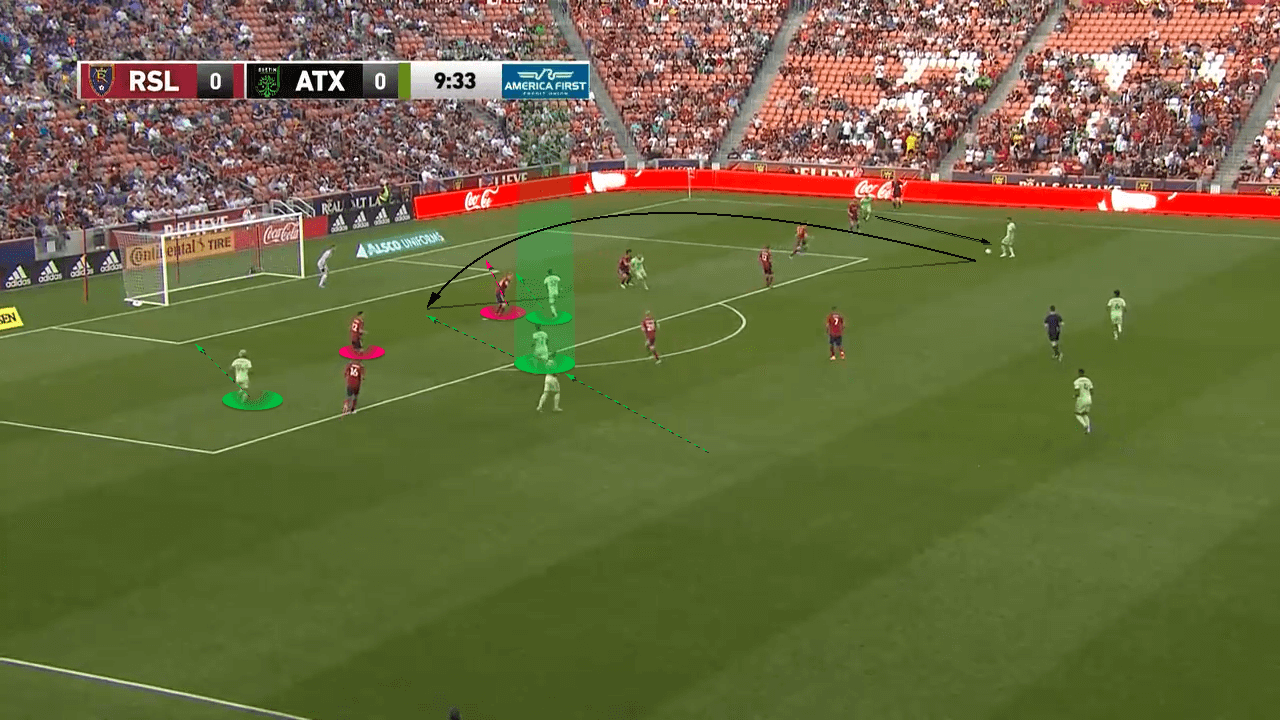 This image shows Driussi making a late run from midfield to get on the end of a cross. Austin’s left forward, Fagúndez, highlighted on the far left of the box, stays relatively wide, keeping the opposition full-back from closing the space to his centre back.

With the ball-near centre back occupied, Austin’s centre forward makes a run to the front area, dragging the ball-far centre back with him. The movement and positioning of the forwards leaves space for Driussi to exploit.

At the moment the ball is laid back to the crosser, Driussi makes a darting run into the box. The movements of his teammates and the timing of his run makes him almost impossible to mark. 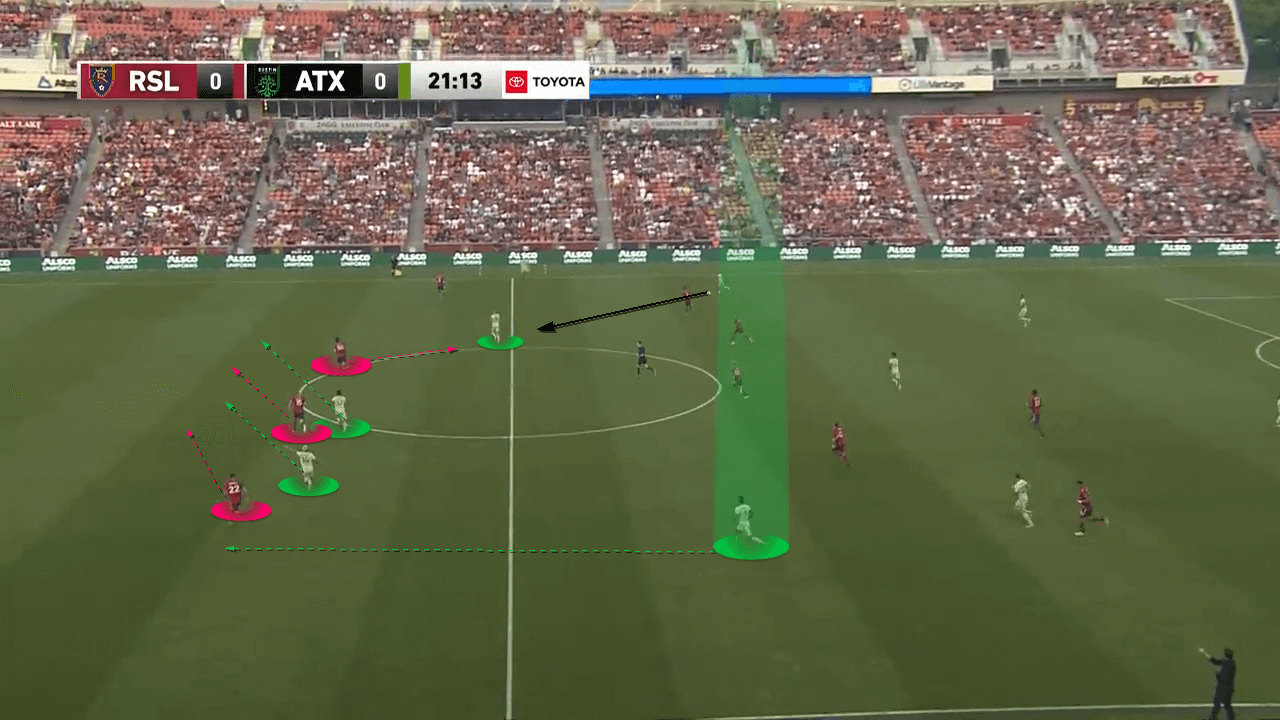 In this example, Driussi, having received the ball deep in his own half on the left side has switched the ball to his right back and has started progressing up the pitch. As the right-back is about to pass the ball into the advanced central midfielder, the opposition ball-near centre back is forced to press the midfielder.

In all three of these scenarios, the willingness of his teammates to make selfless runs to provide allow Driussi to receive the ball in space is a clear indication of how important he is to the attacking flow of the team.

Austin’s improved results this season have been quite remarkable. A large proportion of that can be explained by their outperformance of xG both for and against, a combined total of 15.6 xG, but that does not tell the whole story.

Wolff is getting the best out of Driussi, who is creating and scoring goals, and the improvements to their build-up play have resulted in fewer cheap goals conceded. There may be more of a willingness to play long when necessary, but they haven’t abandoned their style of play – they’re just doing it better. 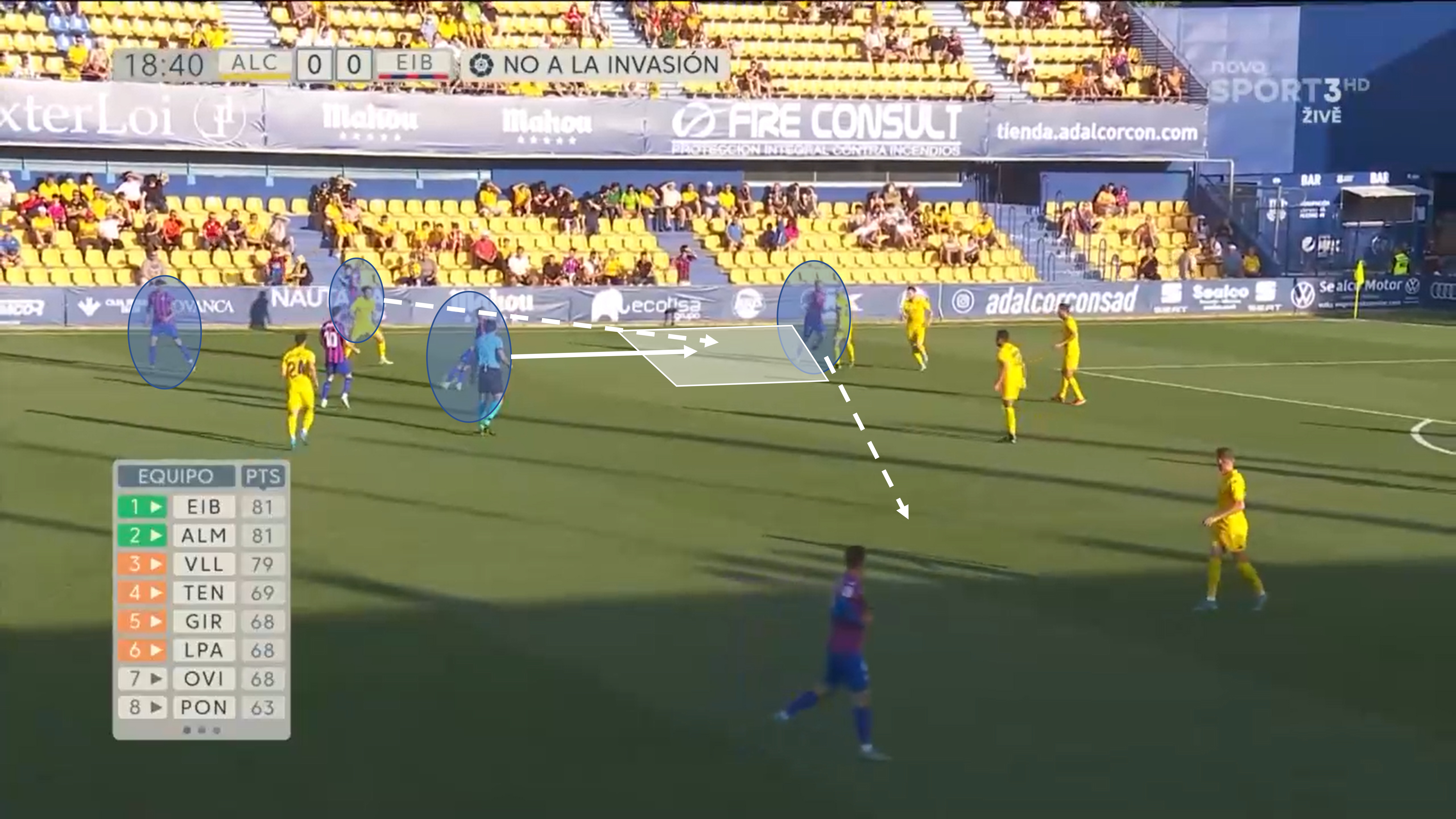 2021/22 Spanish Segunda Division playoffs: How they work and a tactical overview of each team – tactical analysis

With the majority of domestic football finished for the 2021/22 season in Europe, many people are starting to look toward […]