On Sunday Milan beat Sassuolo 3-0 to win their first Serie A title in eleven years.

The Rossoneri travelled to the Mapei Stadium knowing that a draw would be enough to claim their nineteenth scudetto. Inter who were in second place were two points behind their rivals with a worse head-to-head record.

This was being labelled as a tricky fixture because Sassuolo had already beaten them this season. Milan proved any doubters wrong and won the game in the first half with a ruthless display of attacking football.

This article features the tactical analysis of the game and explains the key tactics behind Milan’s dominant first-half display and why it proved too much for Sassuolo to recover from as Milan claimed all three points. 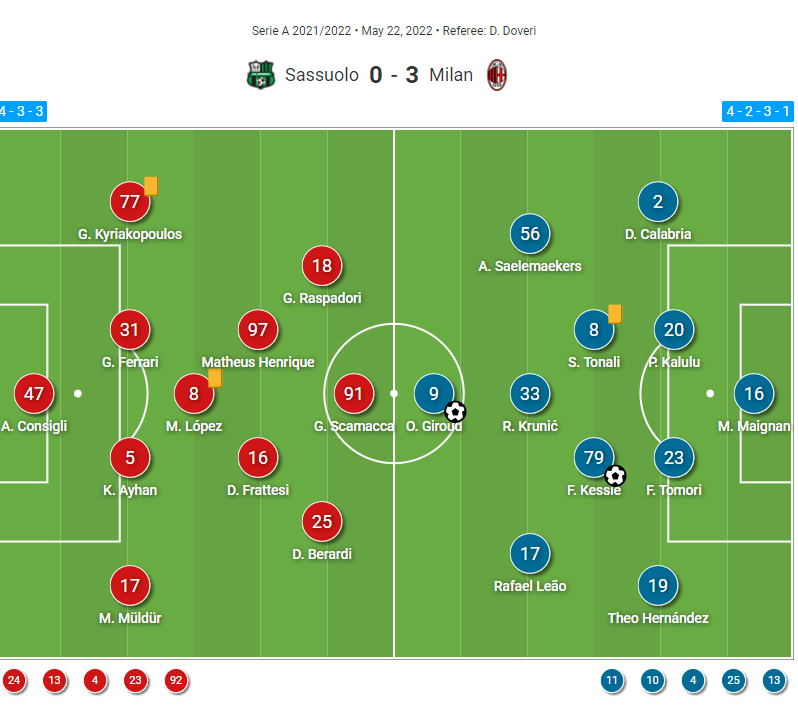 Milan came into the match on the back of five straight league victories. Stefano Pioli set the team up with their usual 4-2-3-1 approach, a system which has been used in all but three of their league games this season.

Milan’s interpretation of the 4-2-3-1 formation allows them flexibility and adaptability in and out of possession. This enables them to attack in numbers and also defend in numbers, a tactic that Pioli would want to implement in this game as Sassuolo are dangerous when they attack but vulnerable when defending.

Milan kept the same starting eleven that started their last two games against Atalanta and Hella Verona, with Pioli now having a fully fit squad to choose from as Ismaël Bennacer returned to the substitutes bench.

Sassuolo were ending the season in not such good form, having only won one game in six.

They made three changes from last week’s victory against Bologna with Maxime Lopez Kaan Ayhan returning to the starting lineup and Giorgos Kyriakopoulos returning from suspension.

Alessio Dionisi switched Sassuolo’s formation to a 4-3-3. They have used the 4-3-3 system as a secondary option under Dionisi, as he has, for much of the season, approached games using a 4-2-3-1 formation. The switch in this game was made to try and control the match centrally and to give Sassuolo more possession in deeper areas of the pitch to build through the pitch.

The 4-2-3-1 system that Milan has employed throughout this season works perfectly during their defensive phase of play, and it was no different for this game.

Against Sassuolo, Milan was very effective at defending as a team. They were able to apply low, medium and high blocking strategies with a constant man-oriented press on Sassuolo’s play.

Milan protected their penalty area with up to six players and their defensive third with all ten outfield players when defending in a low block. The back four sat narrow with the double pivot of Sandro Tonali and Frank Kessie would sit just in front forcing Sassuolo out wide.

Then the attacking trio of Raphael Leao, Rade Krunić, and Alexis Saelemaekers would drop deeper and compress the space within the midfield. As the image below shows. 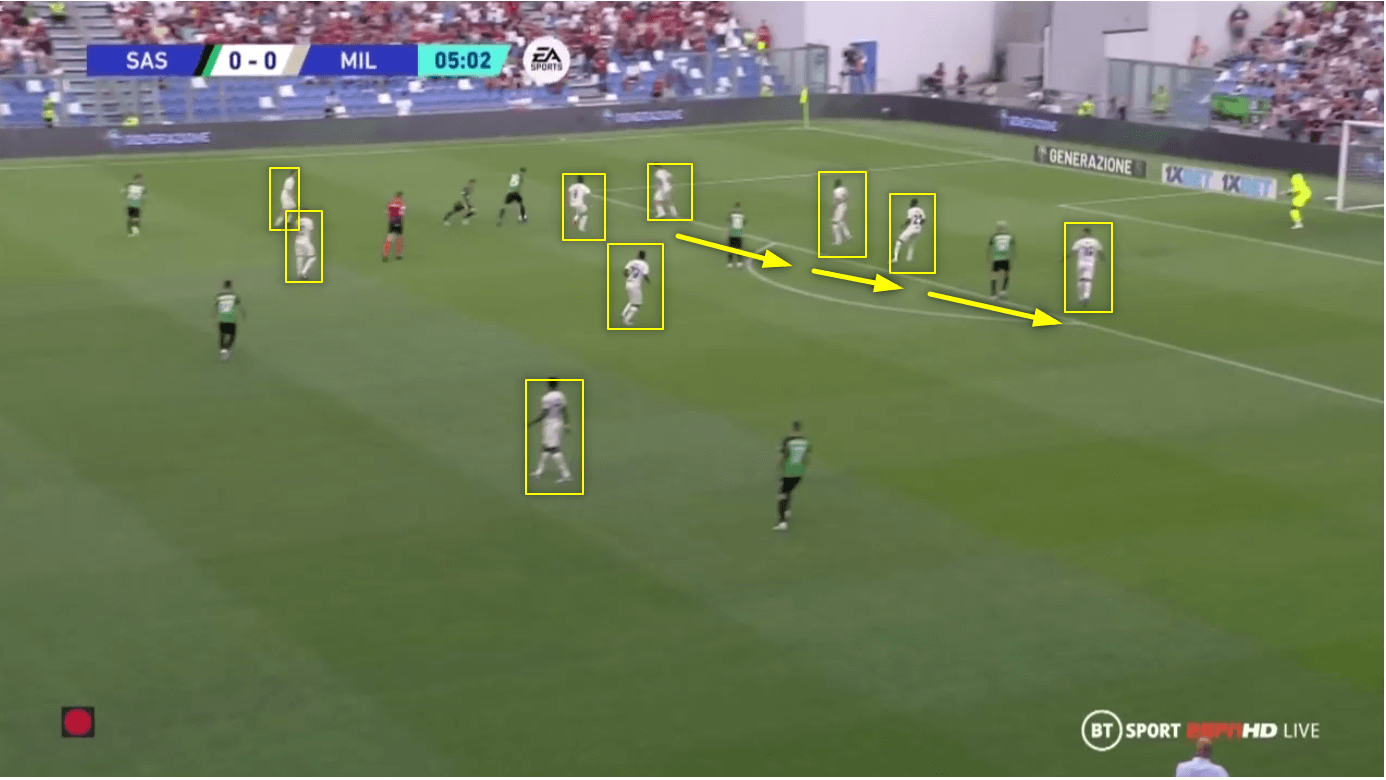 Once the play is forced out wide, the pressure doesn’t stop. Milan then wants to win the ball in this area. The above example shows how Milan has a 4v3 defensive overload as they look to block Sassuolo in that part of the pitch.

This caused Sassuolo potential vulnerability in this area as inevitably they will support the play with their full-backs, which leaves space out wide for Milan to counter.

Milan maintained their 4-2-3-1 shape when defending the middle third of the pitch. Although rather than closing the spaces as they did in the defensive third, they applied a man-to-man approach further up the pitch.

Each player would press the ball intensely as the play entered their area of the pitch with the rest of the team applying a man-marking system to limit passing options, as shown below: 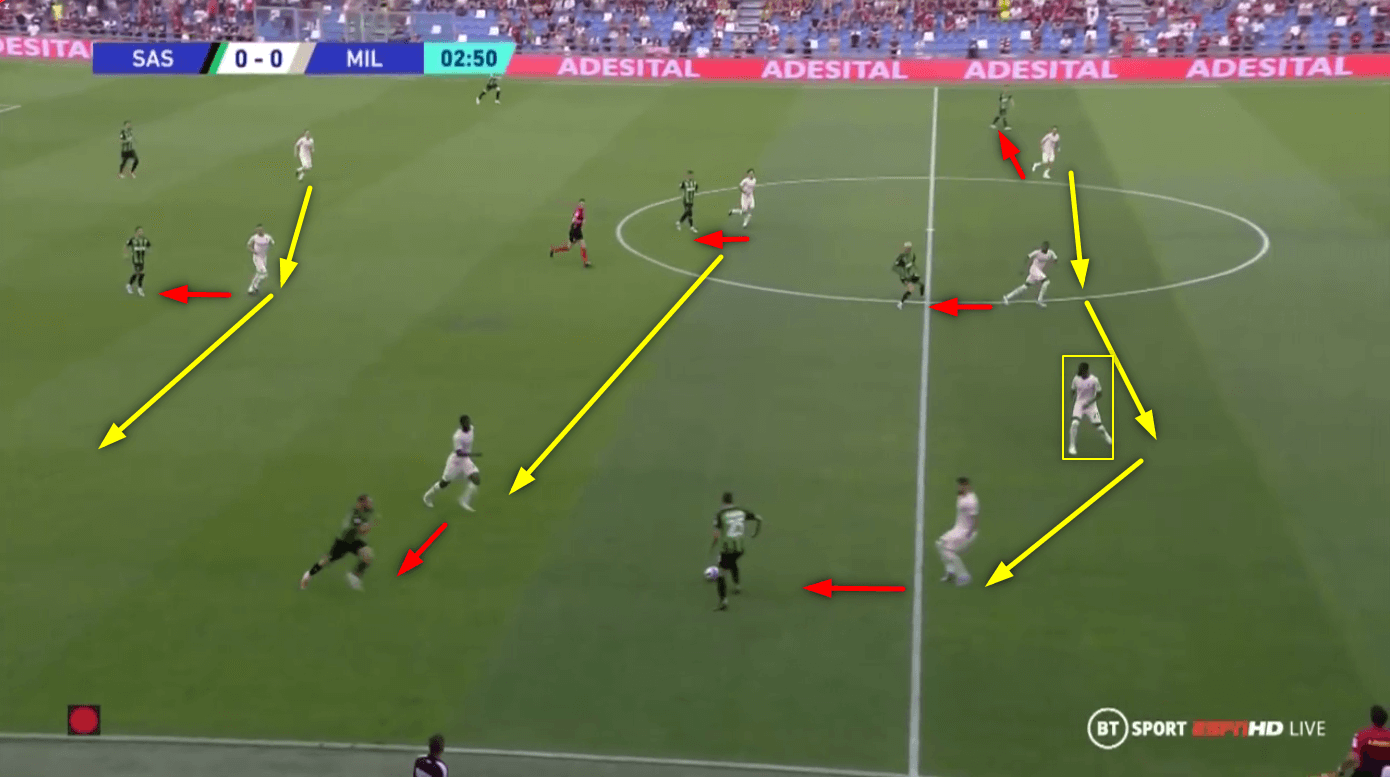 This is crucial because Franck Kessie moves over to the left-hand side to cover Raphael Leao without breaking Milan’s defensive shape. With Fikayo Tomori able to act as the spare man. This stops Sassuolo from overloading Milan’s left-hand side. Theo Hernandez puts immediate pressure on Domenico Berardi.

This is where Alessio Dionisi got his approach for this game wrong. By playing with a 4-3-3 instead of a 4-2-3-1 formation. Sassuolo didn’t have enough central options in their attacking third of the pitch. Gianluca Scamacca kept having to drop deep to get involved in the game. This enabled Milan’s defence to keep pushing forward to close the space in front of them as Sassuolo couldn’t get in behind.

Milan put constant pressure on Sassuolo right through the pitch. Sassuolo were not allowed to settle into any kind of rhythm in possession. Milan’s intense pressing system and 3-1 structure were forcing Sassuolo into areas of uncertainty. This caused them to make mistakes.

When Sassuolo tried to play out from goal kicks they were being forced to hold onto the ball in their defensive third. Milan’s 3-1 structure which consists of the two wide players, the attacking midfielder and the centre forward was excellent at controlling the space.

Giroud triggers the press. Initially, his role is not to win the ball, it’s to stop the play from progressing forwards. He achieves this with the position and angle of his run. Sassuolo’s centre back only has two options to go direct or play the ball back across to the penalty area which he does. 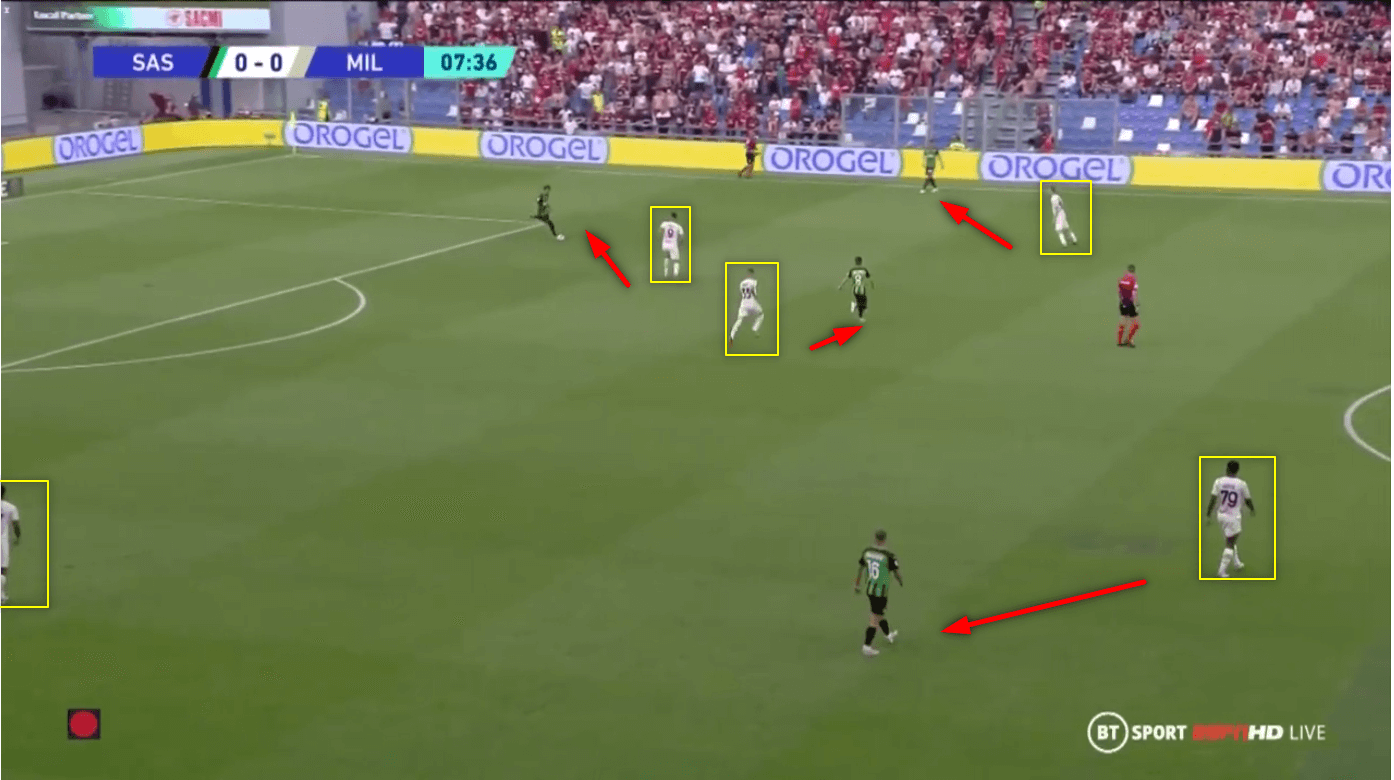 The play proceeds to this. Once this pass across the penalty area is made Milan’s press becomes more aggressive. Giroud continues to press the man in possession.

Leao and Saelemaekers move further inside. Leao cuts a passing lane and tries and force the play to the right-back where Saelemaekers is marking the centre back.

Milan has successfully compressed the space and cut all passing options available to the ball carrier. 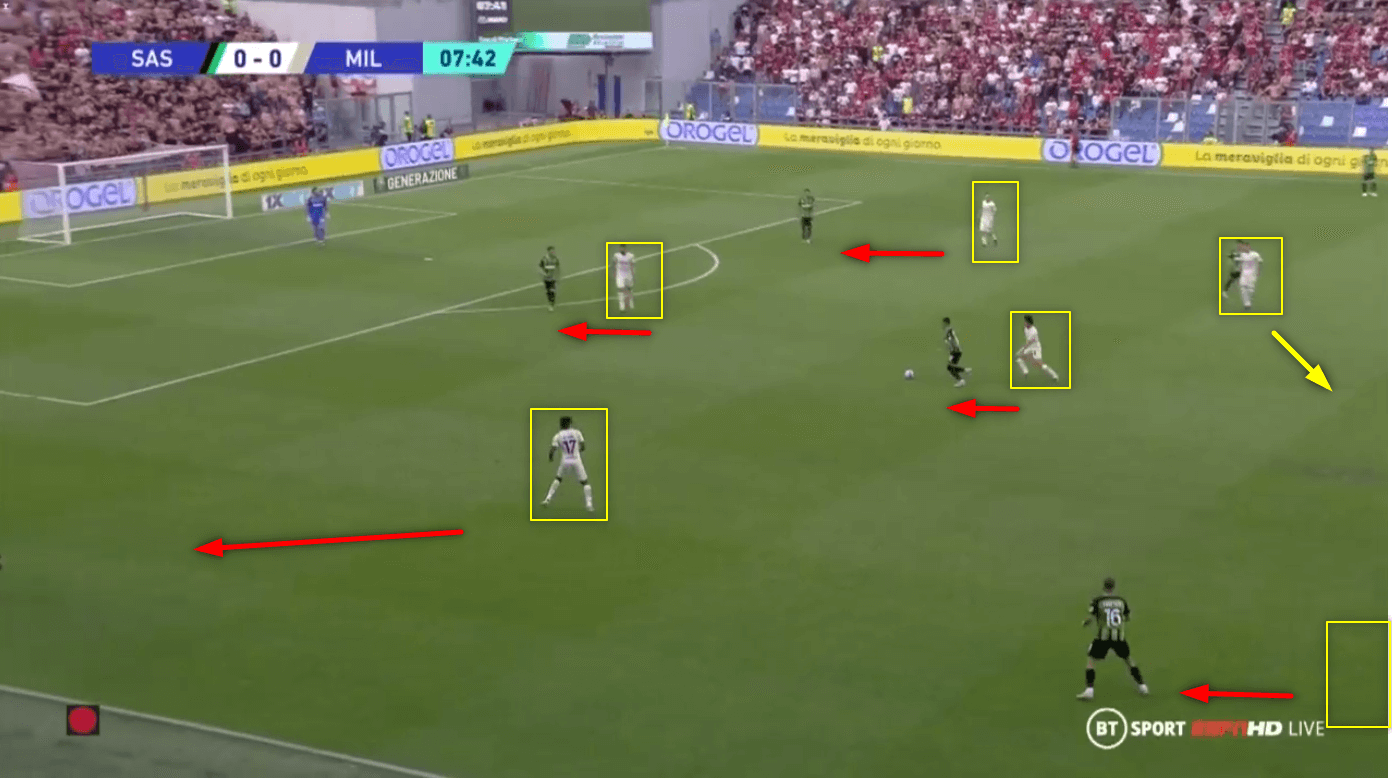 Once Matheus Henrique drops deep to receive, that’s when Milan looks to win the ball. Tonali pushes forward, forcing Henrique towards his own goal and wins the ball giving Milan a 4v2 on the edge of Sassuolo’s penalty area.

Milan’s high block was exceptional in this game. It was well-timed, cohesive and had good fluidity. You can see above how Krunić is automatically making the run to cover the space that Tonali leaves.

Stefano Pioli’s tactics for this game were clear. Force Sassuolo into specific areas of the pitch, apply the press to win the ball, and transition into attack quickly.

Their quick transitions into the attack were what won them the game. Sassuolo couldn’t cope with Milan’s direct running and ability to attack the space created by their movement.

As you can see in the image below, once Milan win the ball, Sassuolo’s transition from attack to defence is weak and very open. Milan finds themselves in a 4v4 situation with Sassuolo’s defenders after Kessie intercepts the ball centrally and Tonali breaks forward into the half-space. 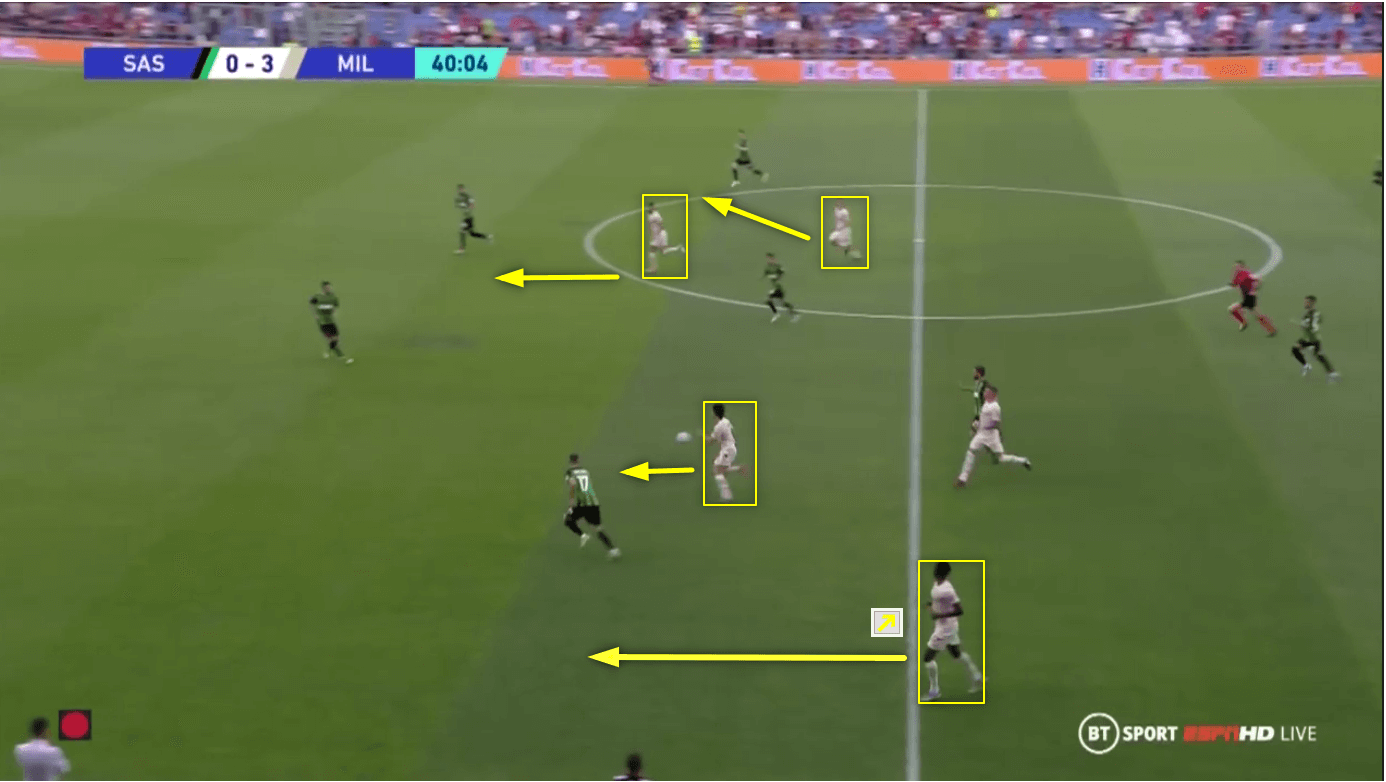 You can see the space that Sassuolo were leaving open. Milan focused their attacks down the left-hand side because of Leao. However, there is space available to attack right across Sassuolo’s defensive third. This will be a concern in the future for Alessio Dionisi.

The more Sassuolo attempted to play through the middle the more trouble they would cause themselves. Both full-backs were getting caught too high up the pitch.

Milan didn’t let Sassuolo’s three central midfielders have any time on the ball, once they received possession of it in their half. This must have been Milan’s line of pressure and trigger to engage with the press.

This passage of play starts in Milan’s half with Sassuolo in possession. The play is forced back and then Olivier Giroud wins the ball and Milan creates a 4v3 situation. 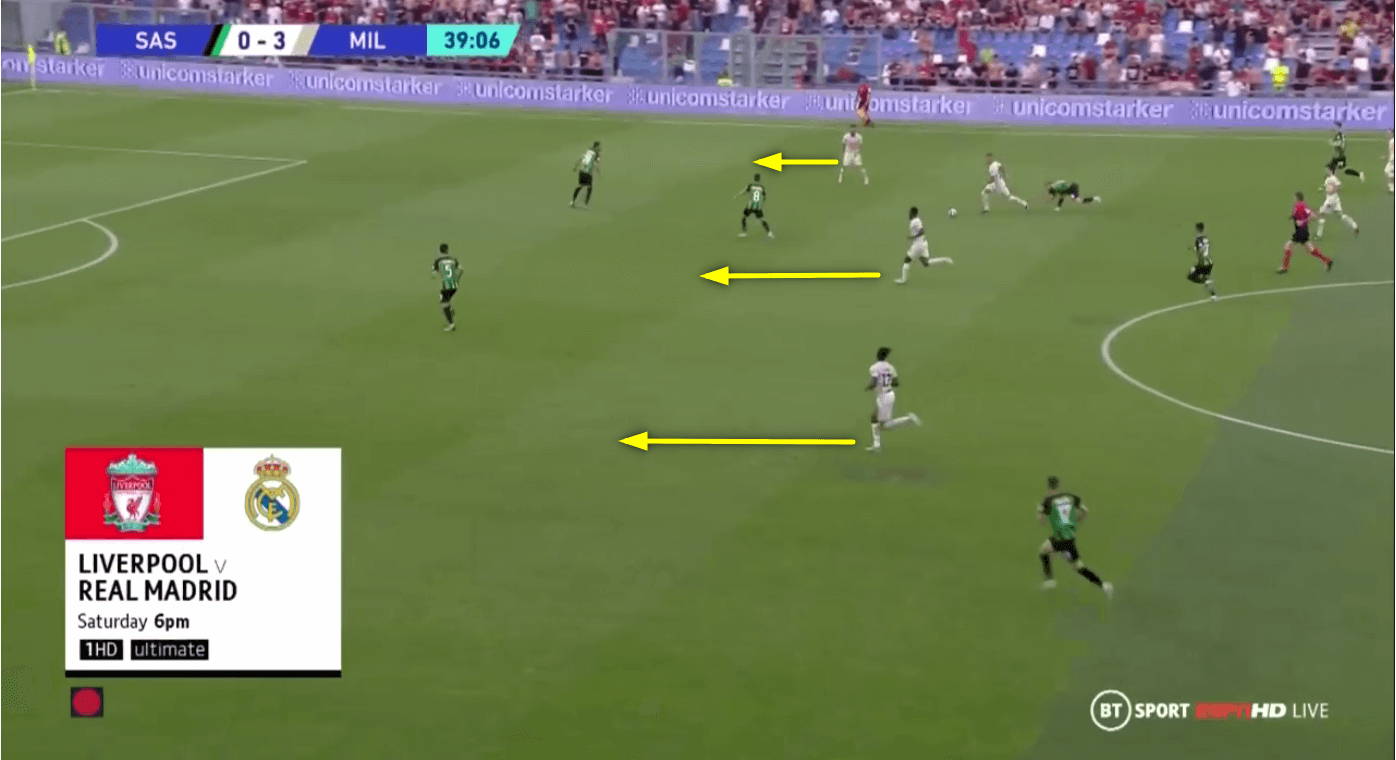 Alessio Dionisi has Sassuolo playing attractive possession-based football, but the team are very open defensively and are vulnerable to counterattacks.

They have conceded sixty-six goals this season and have an xGA of 67, which is the fourth worse in Serie A.

Milan had variety to their play in this game. They would look to build through the defence and play vertically through each third of the pitch, or sometimes they would go direct and look to get the ball forward quickly.

Their attacks were focused down the flanks where both fullbacks Davide Calabria and Theo Hernandez would look to provide the width. However, it was the movement of Rafael Leão and Alexis Saelemaekers on the inside that was causing Sassuolo’s defence to be disjointed.

Both players, or at least one at any time during the Milan attack, would move inside and play close to Giroud. This not only created space down the flanks but created space centrally for Giroud.

For example, in this image, Leão and Saelemaekers, both come inside. Leão makes a diagonal run across Sassuolo’s defence and takes the full-back with him. Once this happens, Giroud then can run around the defence and attack the space behind.  You can also see the space created out wide. 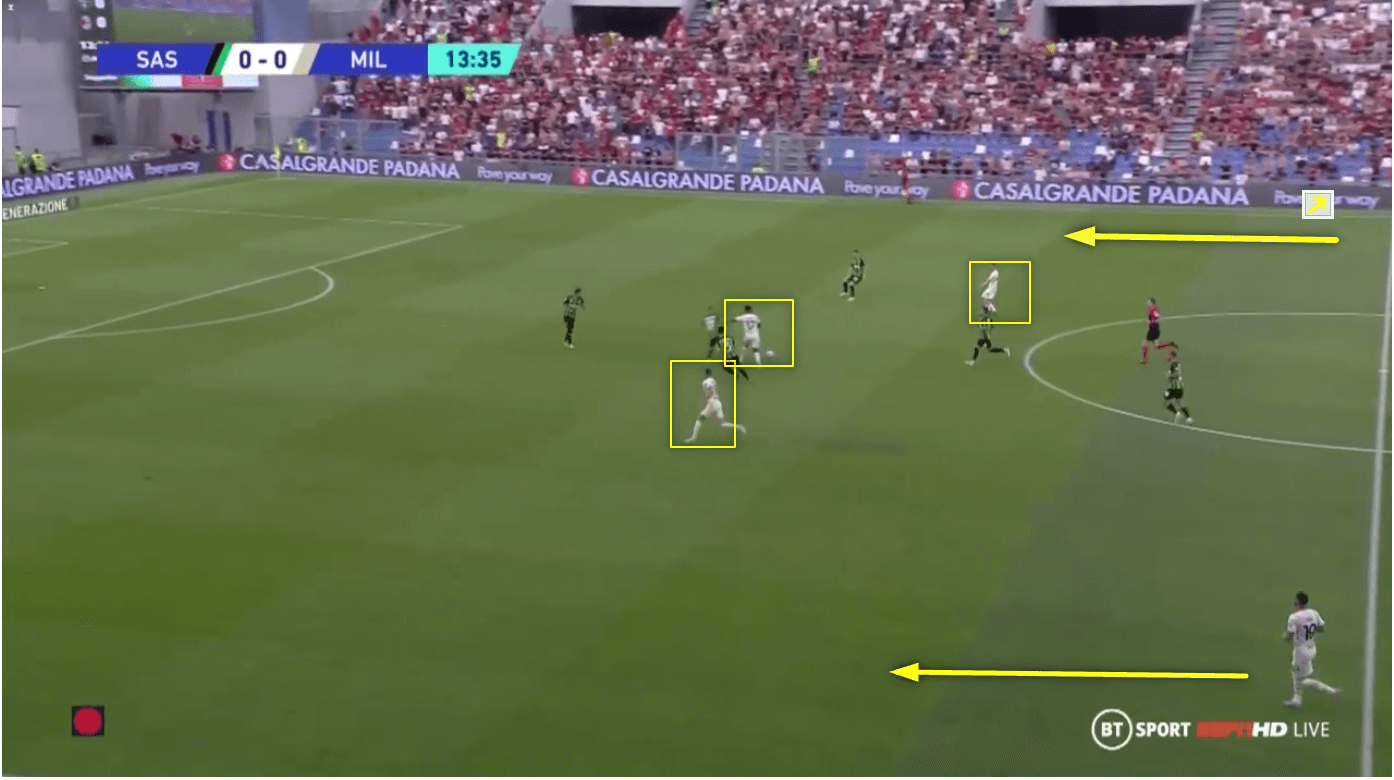 The movement inside allowed Milan to overload the Sassuolo penalty area and attack through the middle in numbers. To try and counter this Maxime Lopez who was playing as the single pivot in front of the Sassuolo’s defence ended up playing as a third centre-back at times. 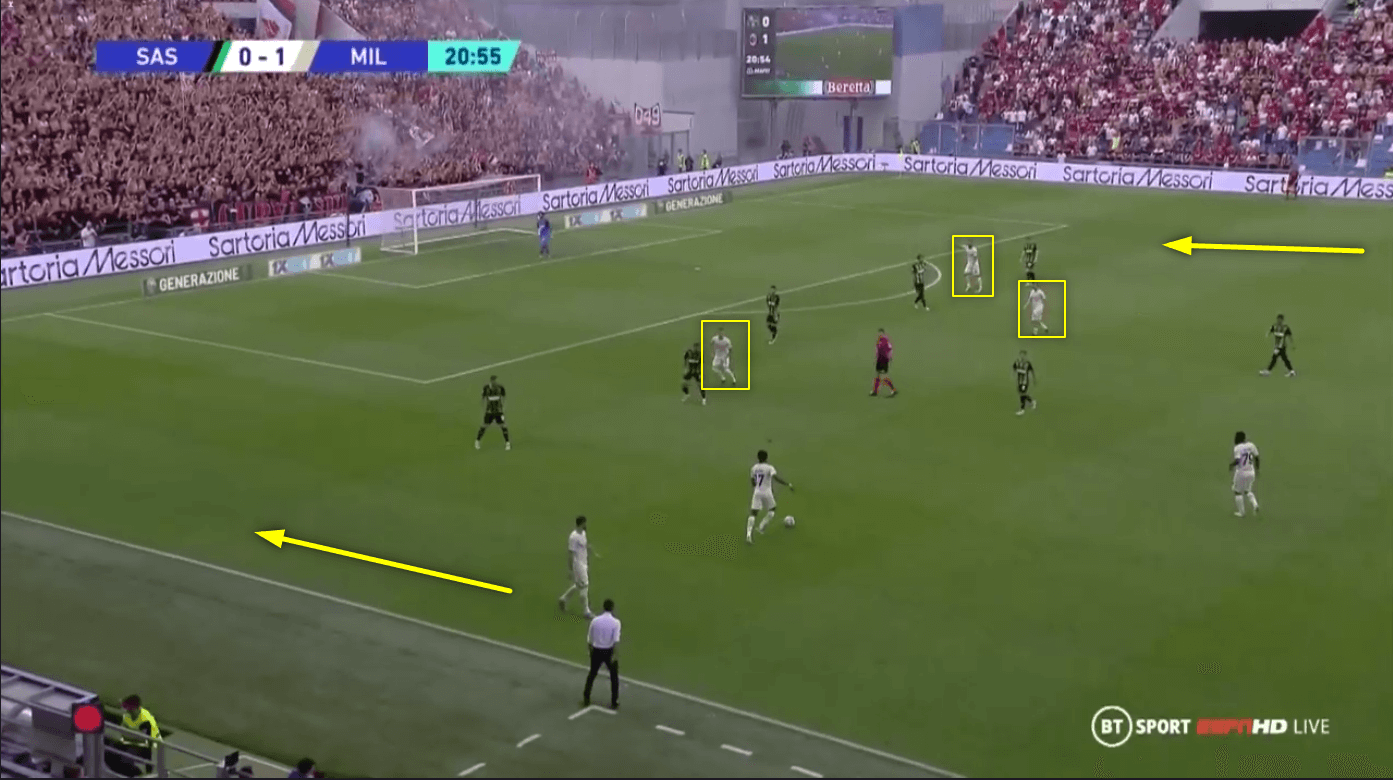 Milan’s attacking movement in this area was just too good. Lopez dropping in between the centre backs at different times didn’t do anything to stop Milan. You can see in the images above and below how the movement and the positioning from Milan’s attack are creating space behind, in the half-spaces and out wide. 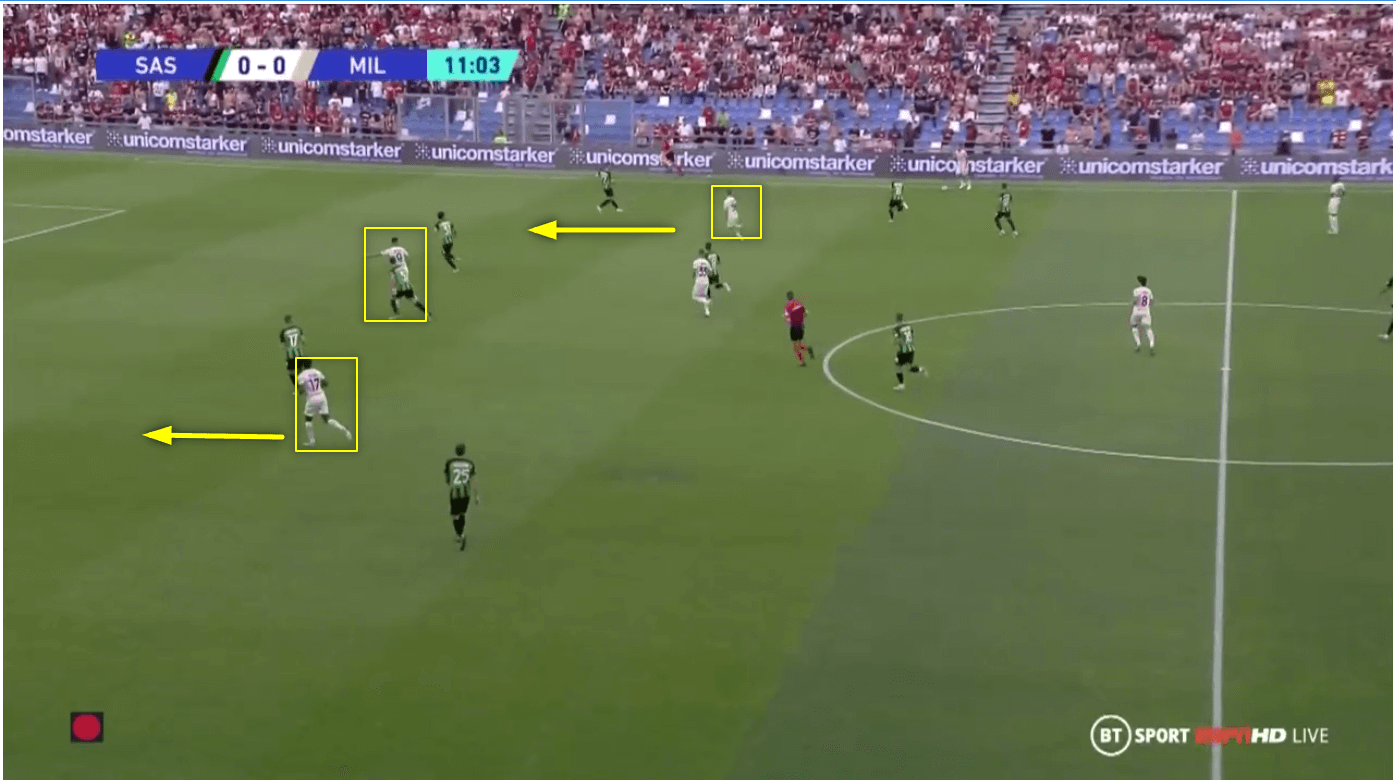 Milan finished the season with an unbeaten run of sixteen league games. During this run, they only conceded six goals, conceding just thirty-one in total throughout this league campaign, which is the joint best with Napoli. They kept eighteen clean sheets in total.

This analysis has broken down the key tactics of how Milan beat Sassuolo to win their first scudetto since 2010/11.