Jose Bordalas 2021/22: Why he and Valencia remain a work in progress – tactical analysis

Jose Bordalas was appointed as manager of Valencia at the end of last season. His appointment was intended to bring some much-needed stability back to the club.

The Valencian born manager was brought on the back of taking Getafe from the Segunda Division to a fifth-place finish in La Liga, and then to the UEFA Europa League quarter-finals in the space of five seasons.

After stirring a relegation battle in the face last season, Valencia eventually finished in thirteenth place. This was their lowest league position this century.

The appointment of Jose Bordalas was seen in a positive light with the club’s owners and fans both hoping he can match his overachievement with Getafe and progress Valencia further up the table.

Despite reaching the final of the Copa del Rey, the season has been an inconsistent one for Los murciélagos

This article will be a tactical analysis looking at the attacking and defensive tactics implemented by Jose Bordalas during this campaign. As well as analysing what hasn’t worked for him and the team this season.

Jose Bordalas’s tactical philosophy is based upon an organised and aggressive 4-4-2 formation. He doesn’t place any importance on his team maintaining possession and would much rather his teams control the space.

His teams favour a direct approach that requires them to get the ball forward quickly, focusing on being ready to win second balls and then playing in the opponent’s half. With his team playing as high up the pitch as possible holding a high defensive line. Bordalas likes his teams to play as a unit and stay compact. Making it difficult for teams to be able to play through them

The same principles have applied to Valencia. However, as you can see, he has had to be more adaptable this season and move away from his 4-4-2 approach. As he has only started with this system in 48% of their matches. Moving away from it in the second half of the season.

Jose Bordalas has continued his attacking principles with Valencia. He likes to get the ball to the front end of the pitch and into the wide areas. Then the team attempts to play from there. His teams still play with two centre forwards that each provide different styles and can both look to maintain high pressure.

During the build-up phase, Valencia offers two different types of build-up play which depend on the location of the build-up. From the goalkeeper, they will always look to get the ball into the opponent’s defensive third.

The wide areas are the target from the goal kicks. The target for this play is Maxi Lopez. He will pull out wide from his central position and look to win the ball in the outside channels. Valencia will then look to surround him with players, looking to win the second and third balls and then look to attack from that point.

This is a direct ball from the goalkeeper to Maxi Lopez. Hugo Guillamón and Toni Lato are moving to attack the space in front of the second ball and Hugo Duro and Gonçalo Guedes are attacking the space behind the second ball. 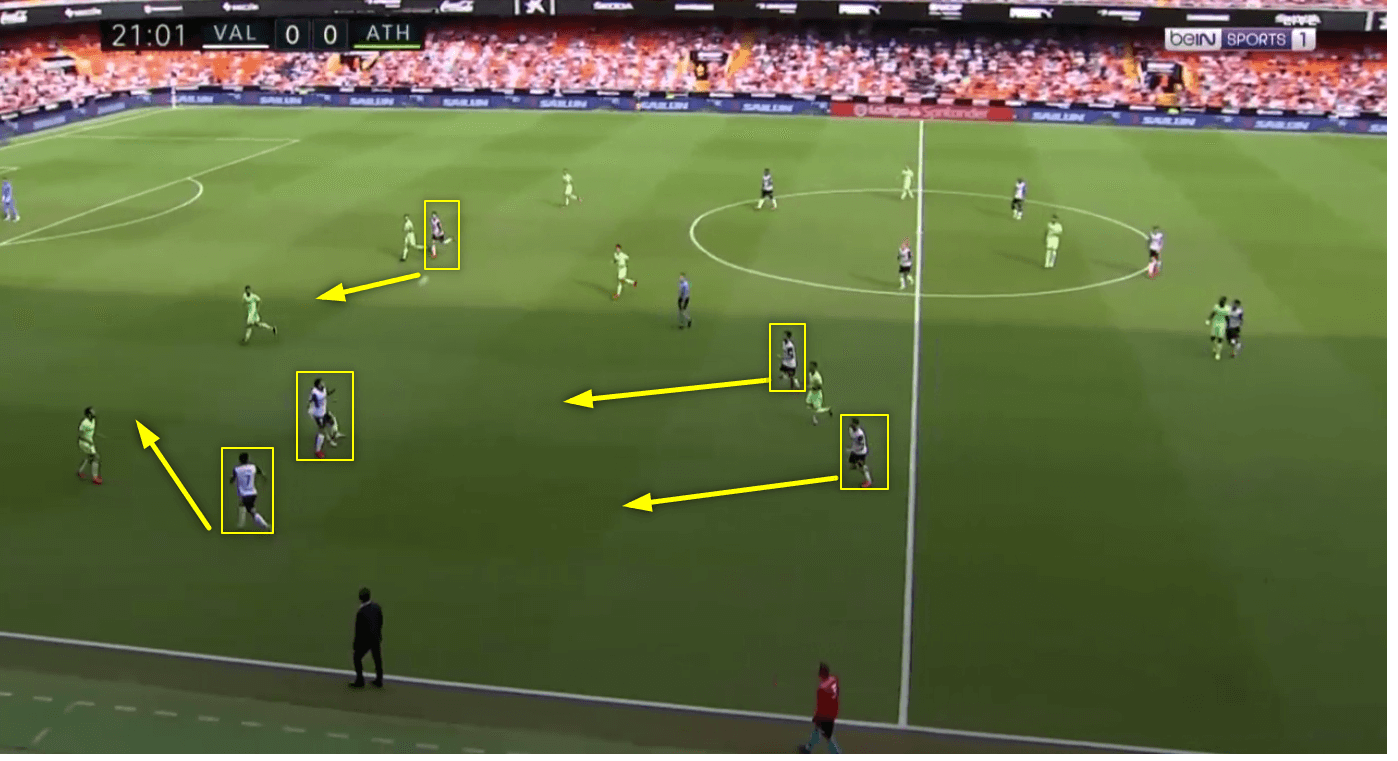 The rest of the will compress the space and push up high as Jose Bordalas likes his teams to win the ball and play in the opposition’s half.

This helps when the pass into Maxi Lopez is not successful, and the opposition wins the ball. The team will be positioned higher up the pitch to press as and look to win the ball back immediately.

Valencia’s build-up will vary when this scenario presents itself. The aim remains the same to get the ball out wide and attack from there. However, they do not always play a direct ball into the forwards.

Hugo Guillamón will drop alongside the central defenders into the full-back position so the full-back can push higher up the pitch and provide the width.

Against Athletic Bilbao, you can see Hugo Guillamón drops to receive the ball and how Bilbao’s right-winger Álex Berenguer closes him down. So does Bilbao’s right back Iñigo Lekue when the ball is played to Hugo Duro. This leaves Toni Lato to be able to attack the space out wide. 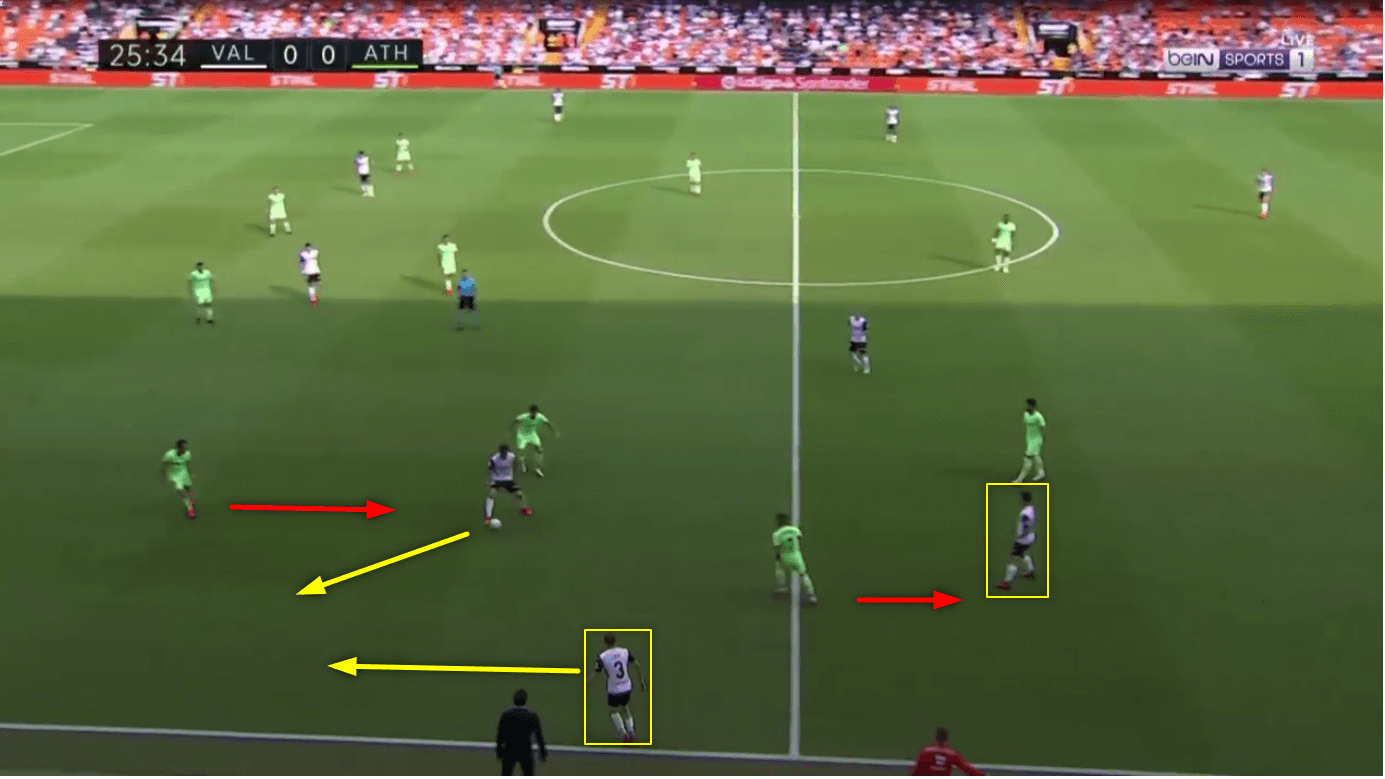 This allows the wide players which are usually Hugo Duro and Yunus Musah to attack inside. A common trait of Valencia this season when playing a 4-4-2 system has been how narrow their attack becomes. 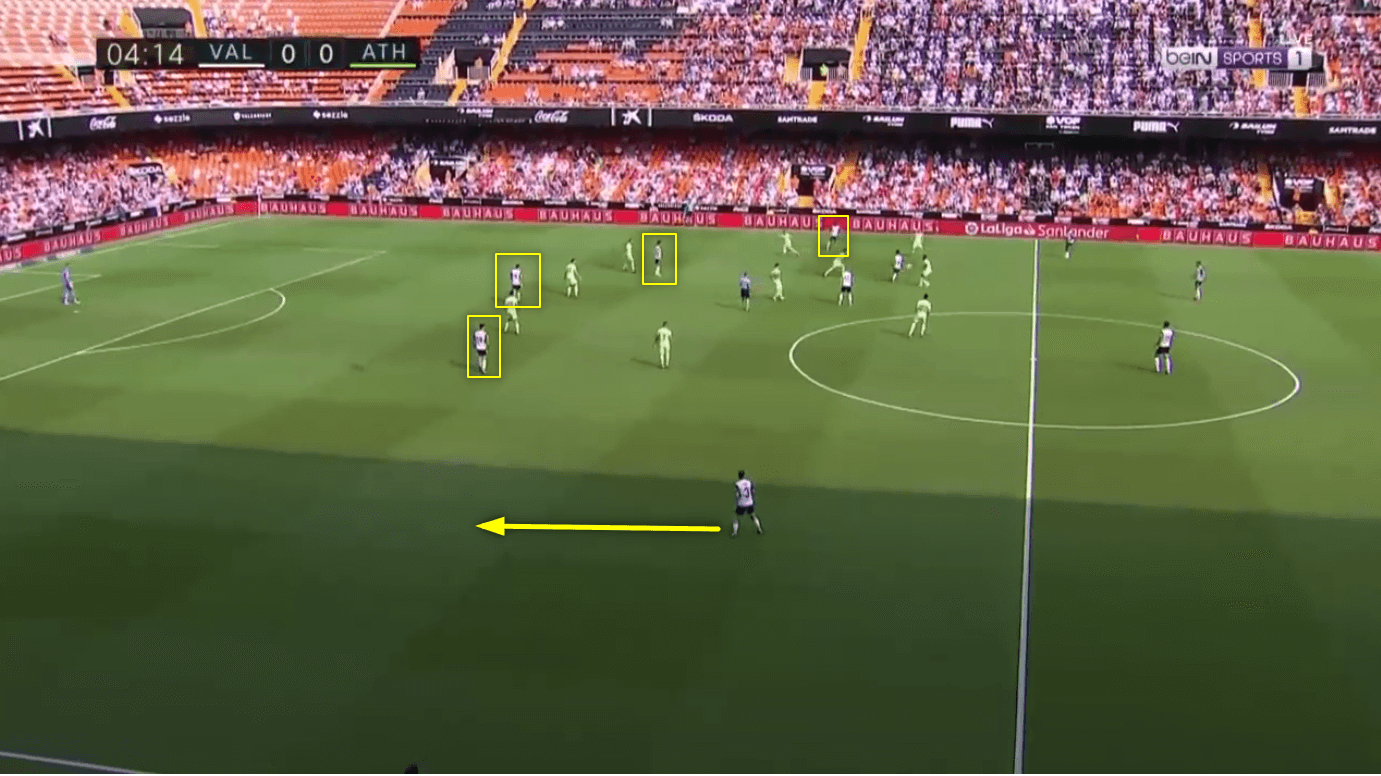 The purpose of this is to attack the penalty area with numbers and give multiple options from crossing positions. It can also create a central overload. It also provides Valencia with the chance to get their most attacking players closer to each other and closer to the opponent’s goal. 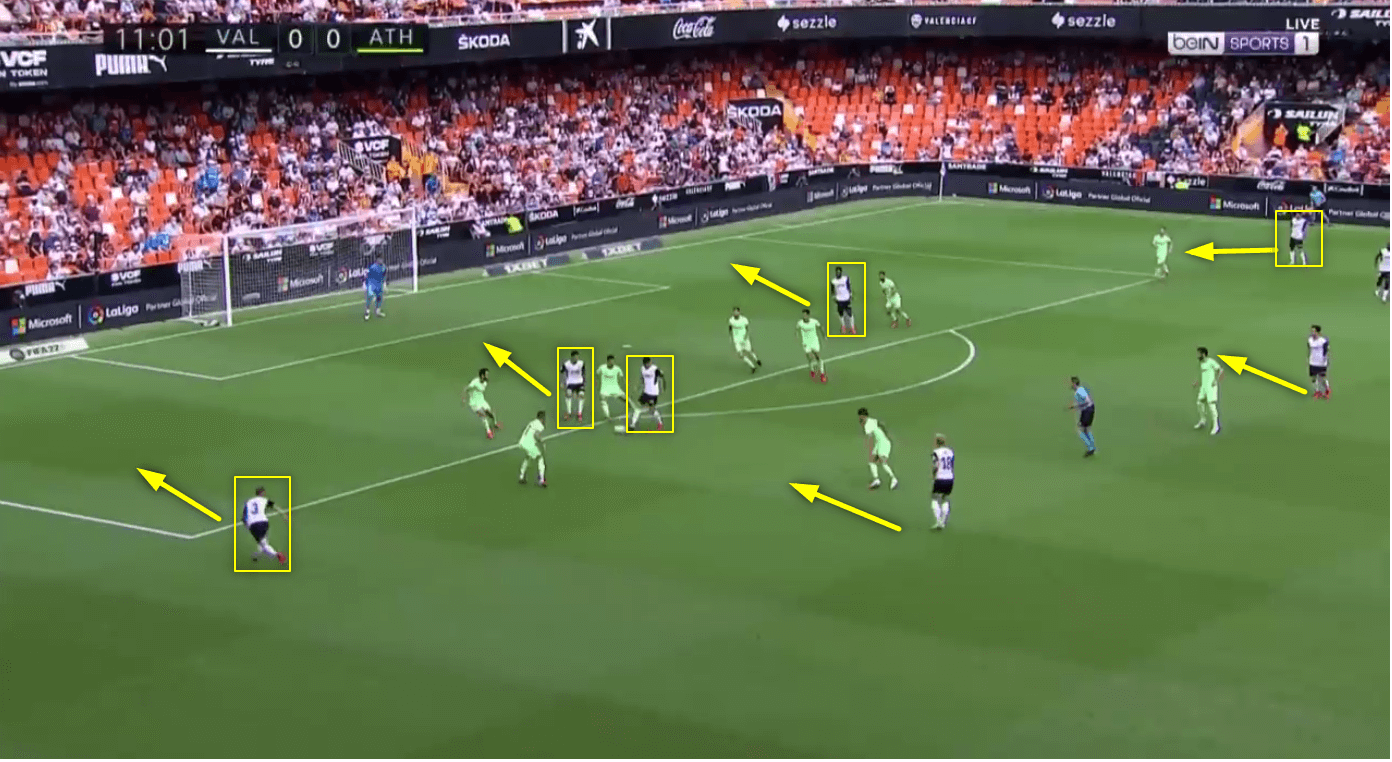 Valencia’s attackers will rotate positions across the attacking third. The aim is to stop their direct attacking play from becoming too predictable. Allowing players such as Gonçalo Guedes and Hugo Duro to have positional freedom plays more to their strengths.

You can see the different variations in the positions and movement in this example below. Valencia are attacking from the left-hand side Guedes has moved onto the right-hand side and Maxi Lopez has dropped deep. Musah and Duro have taken the two central positions but are moving in different directions. 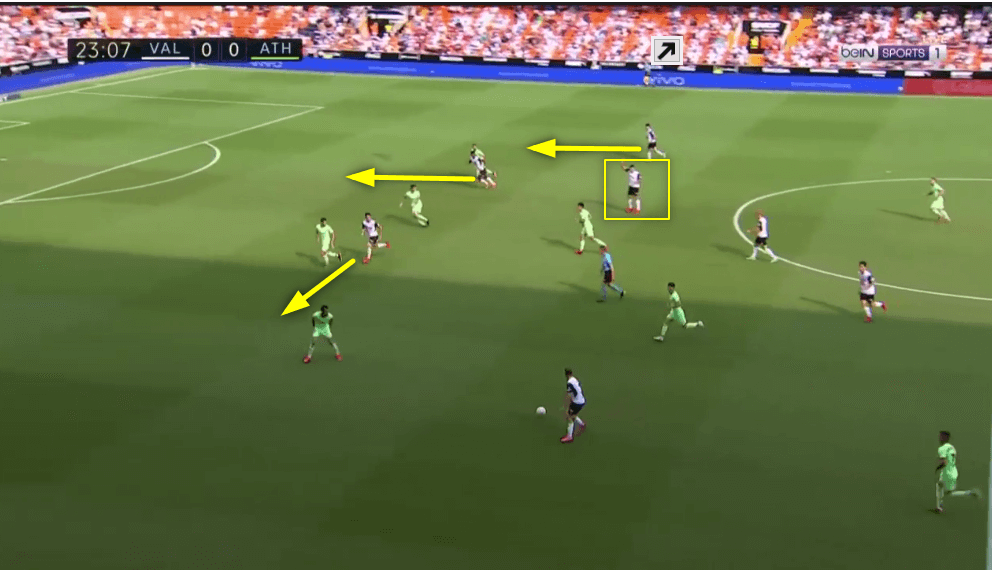 This type of play is good for creating space across your opponent’s defensive line. This allows Valencia to attack the spaces behind an opponent’s central defenders, or between the centre back and full-back.

Out of possession, Valencia keeps a narrow 4-4-2 shape with a medium block. The team positions itself to protect the central spaces with intense but triggered pressing.

They will keep their shape and force their opponents into the wide areas and then look to engage them with an aggressive press to force them backwards or into long passes forwards. The purpose of these tactics is to stop the other team from being able to play through them in dangerous areas and disorganise the team’s shape.

As soon as the ball, the played out wide Valencia will shuffle across as a unit and put pressure on the ball out wide 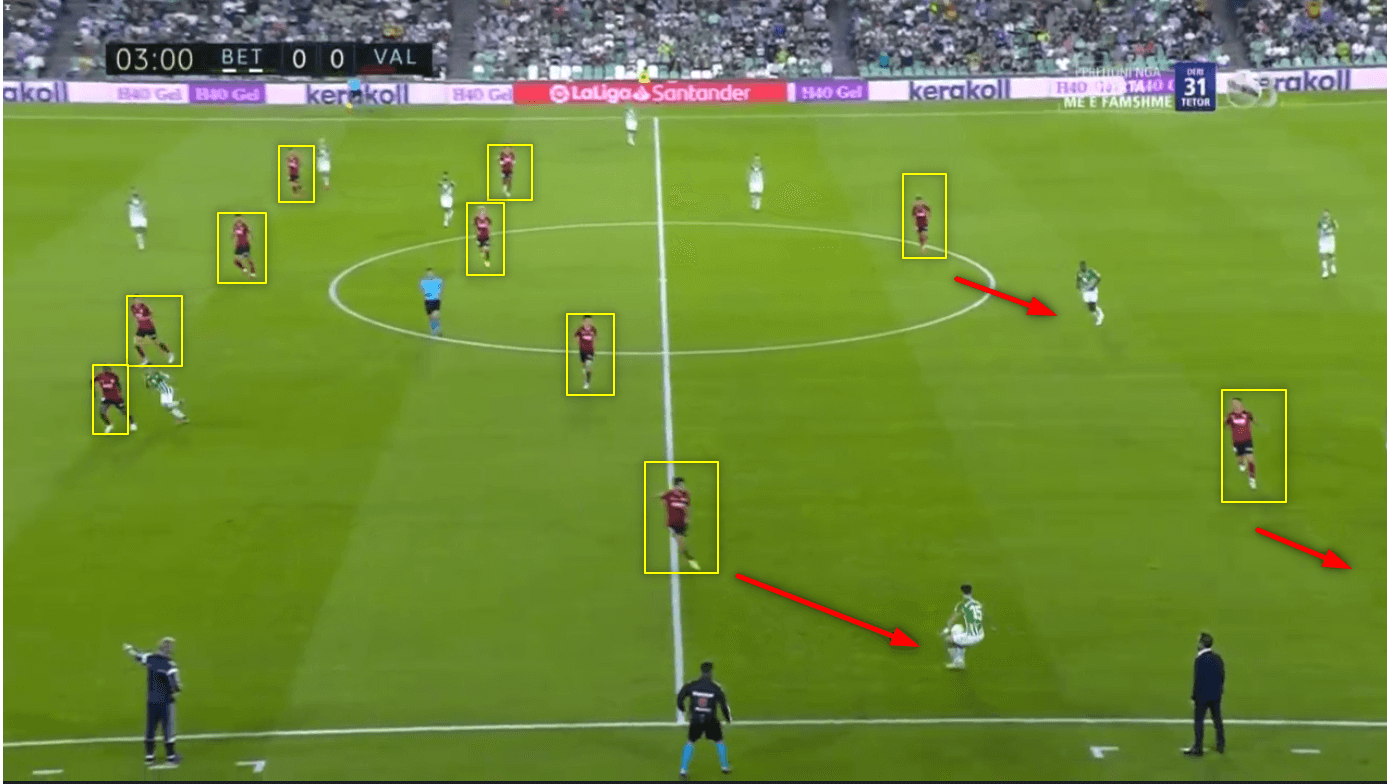 In this example of Real Betis playing out from the back, Valencia’s pressing trigger is set.  Immediately after the ball is played to the full-back Valencia begins to press. As Hugo Duro quickly presses out wide Daniel Wass pushes up and covers the space Duro vacates. Then Hugo Guillamón pushes alongside William Carvalho. This blocks both central passing options for Betis. 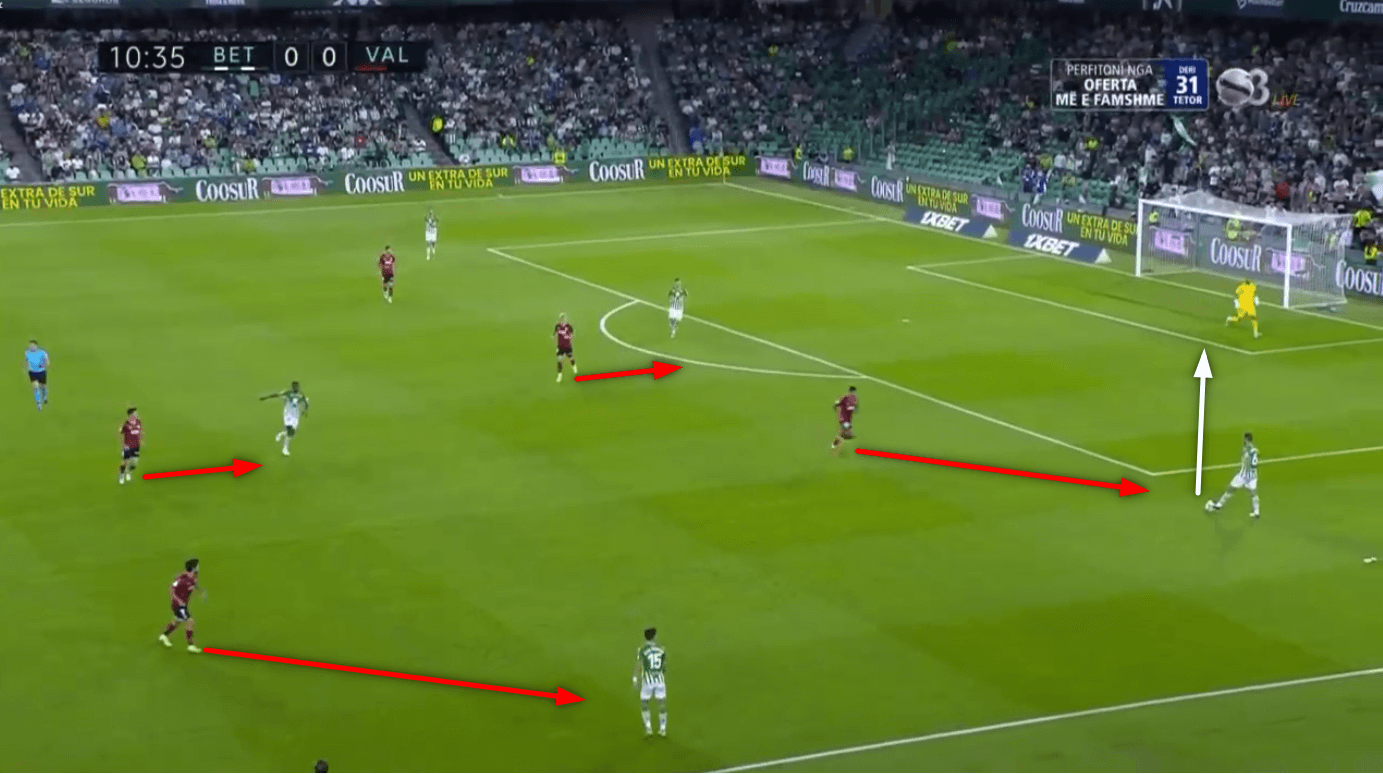 This season when teams have managed to progress further up the pitch against Valencia. The team has occasionally transitioned into a 6-3-1 or even an asymmetrical 5-4-1 defensive shape. As the wide players are dropping into the defensive line to support the fullbacks who sit narrow.

You can see below as Villareal holds the ball down Valencia’s right-hand side. On the left-hand side, Maranhão has dropped to cover the space left out wide from José Luis Gayà sitting narrow. 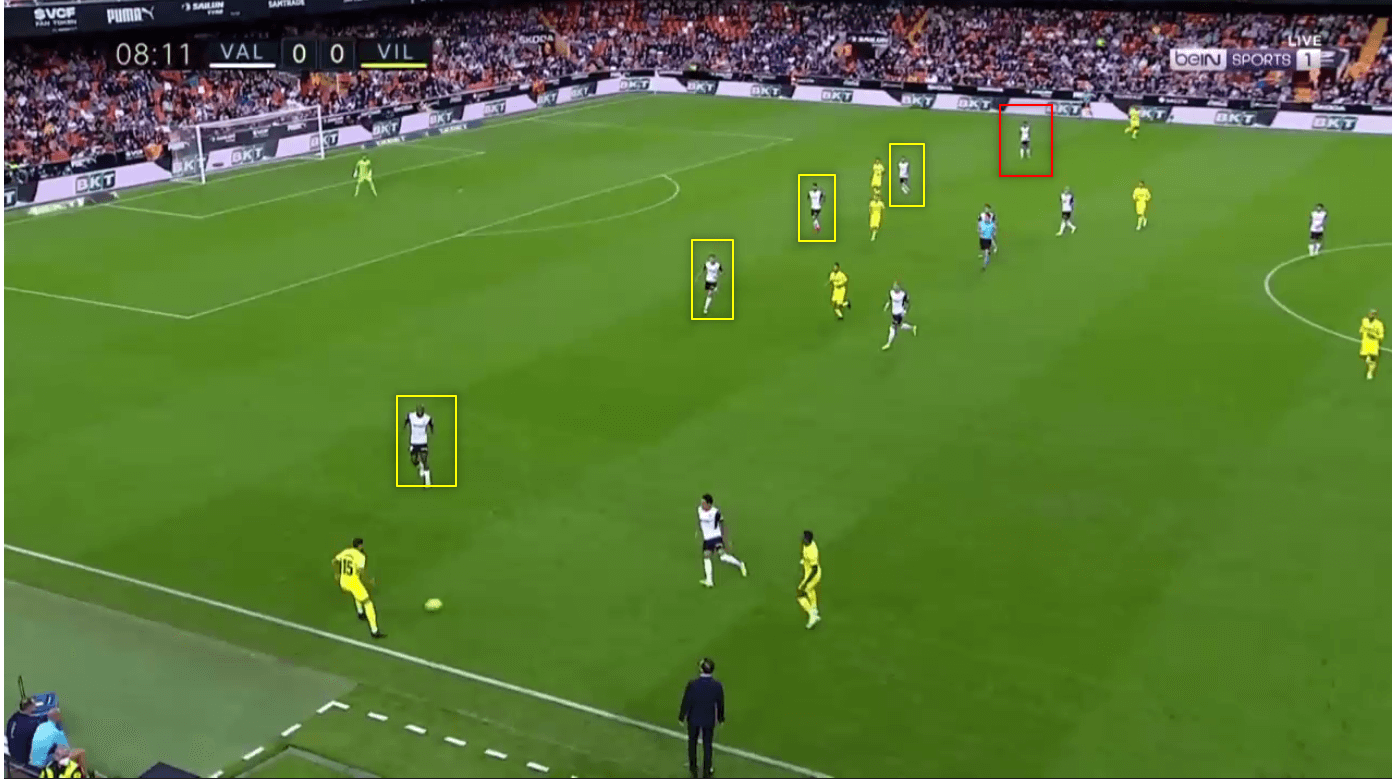 This stops Valencia from becoming vulnerable if Villareal attempts to switch the play and overload the opposite side of the pitch.

The image shows how Villareal doesn’t have many options to be able to progress the play. Valencia have condensed the play on one side and protected themselves on the other. This forces Villareal to play the ball back into their half of the pitch. 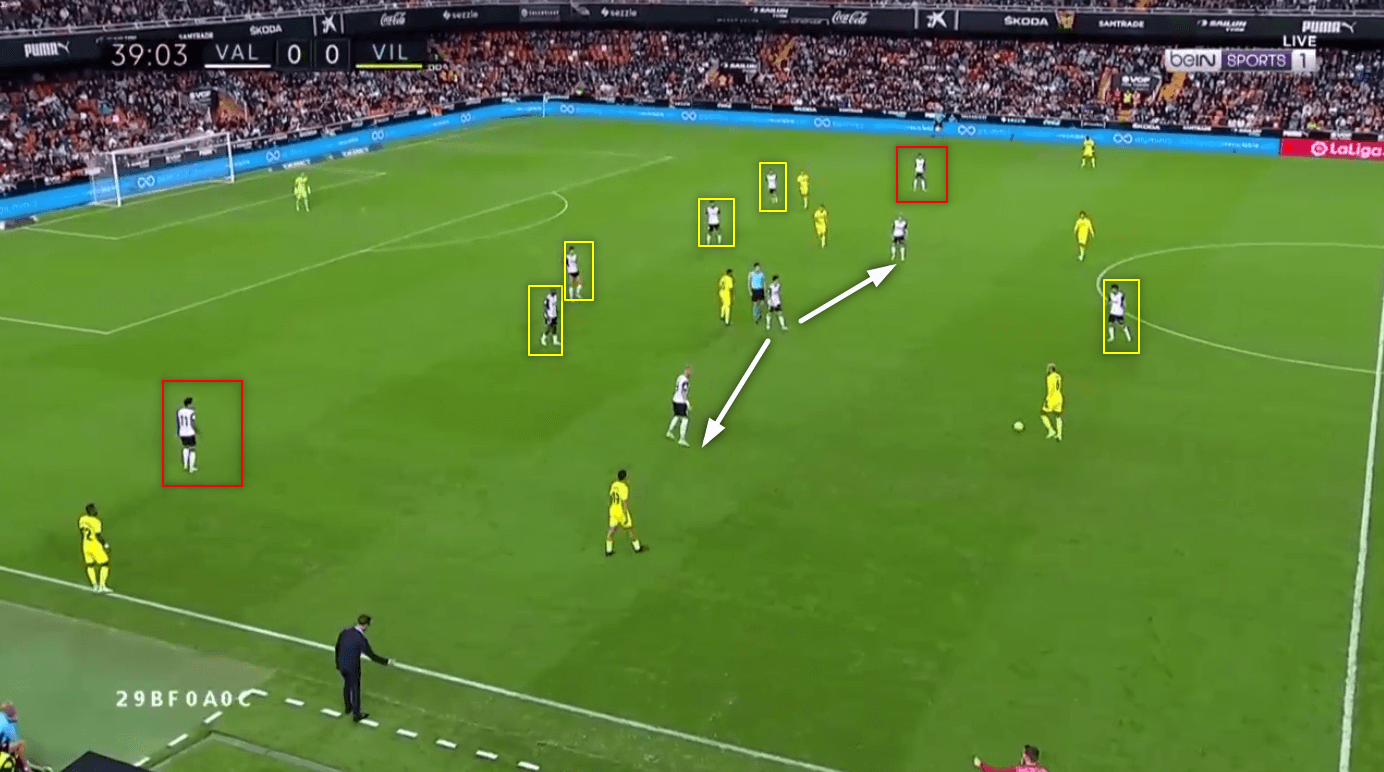 There are always teething problems for managers who look to impose their philosophy on a new set of players. Players and managers will always need an adaptation period.

It’s clear from Valencia’s inconsistent results and form this season that Jose Bordalas’s tactical approach has not had the desired effect. The second half of the season has seen Valencia move away from Bordalas’s renowned 4-4-2 formation and switch between a 3-5-2, 3-4-3 and 4-3-3 formations.

A run of three wins in eleven prompted the switch as teams have started to find weaknesses in how Valencia are playing under Bordalas’s tactical approach.

Valencia have conceded the joint-most goals from counter-attacks this season. They have become vulnerable to teams who transition quickly from their half of the pitch.

As Valencia play long balls forward their positioning and press to win the second and third balls can be disjointed. Teams are now starting to figure out this passage of play, and are taking advantage with quick transitions.

Look here as Athletic Bilbao wins the ball back as a result of being first to the second ball. No Valencia player is close enough to apply immediate pressure. 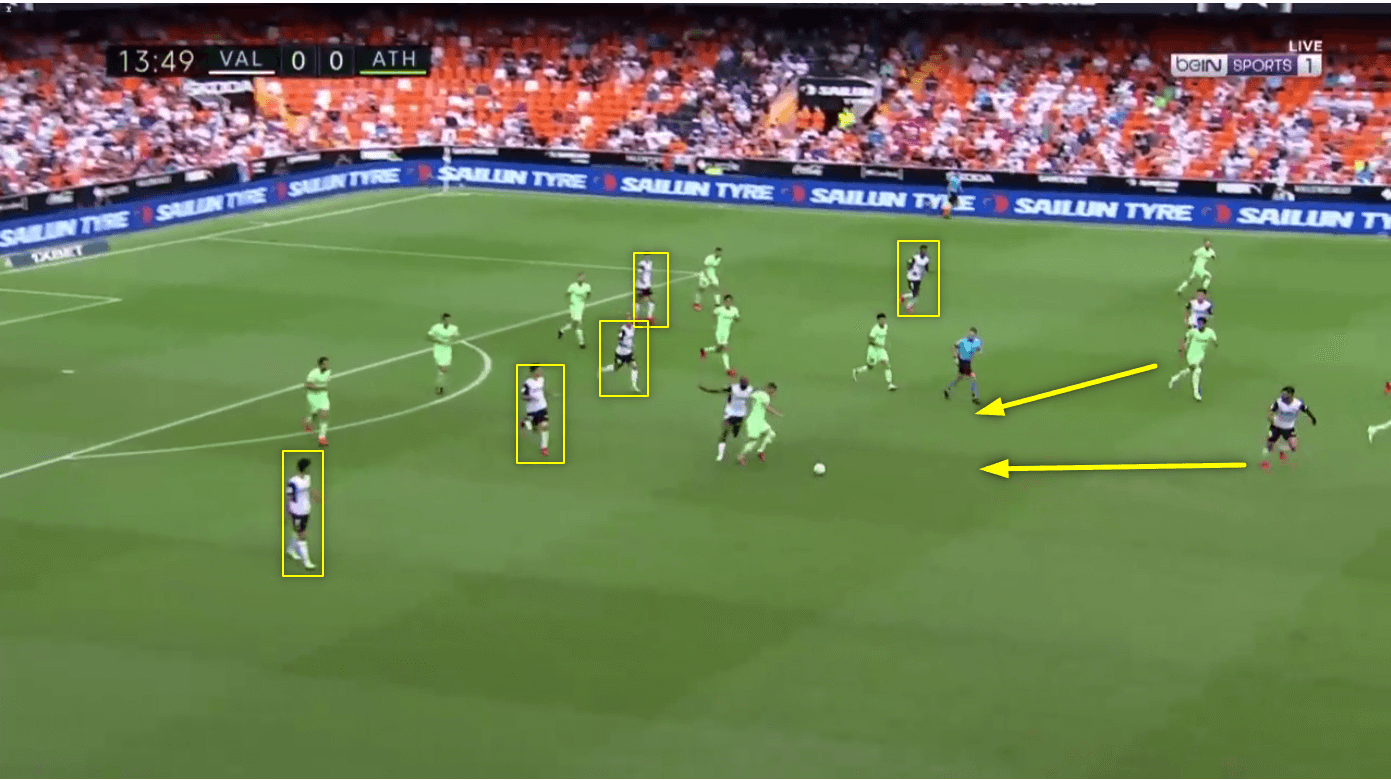 Once the press is beat the situation then develops into this. 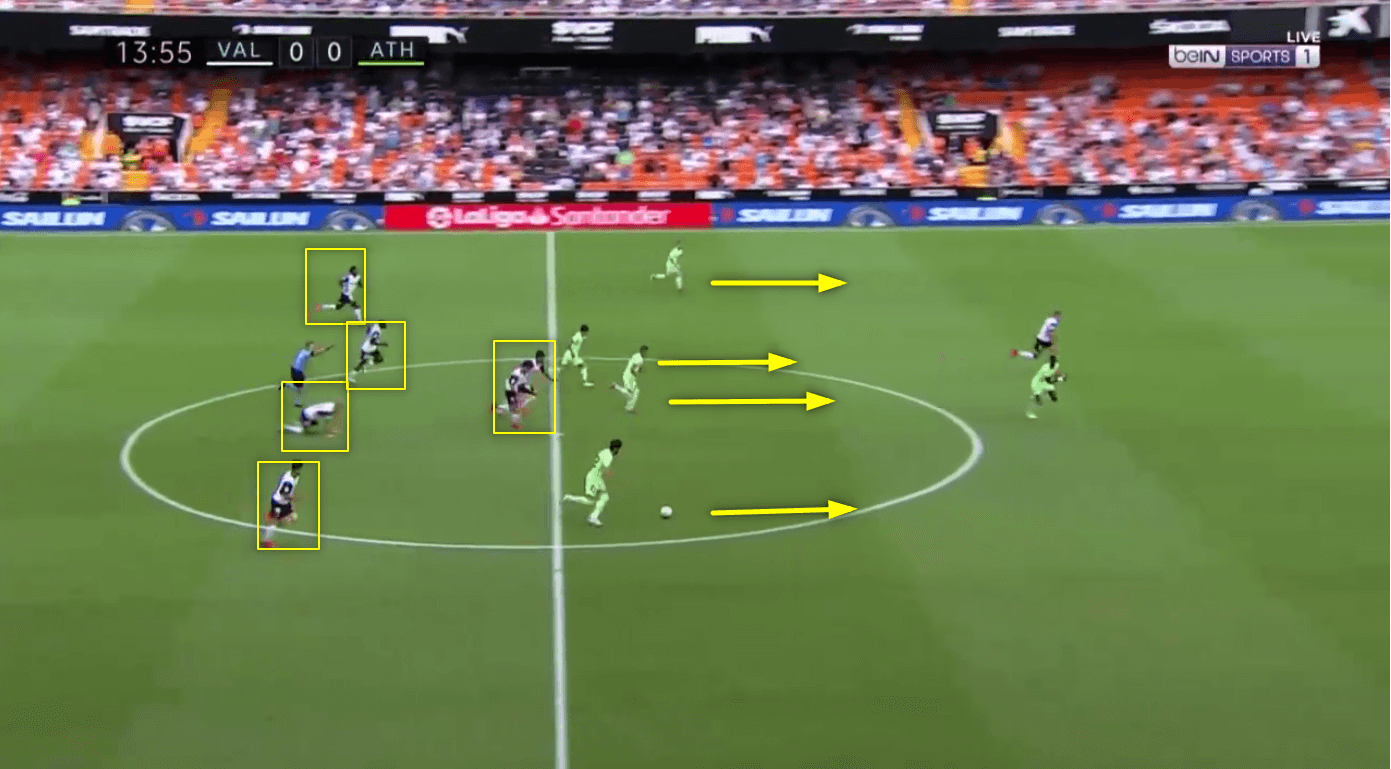 This has become a constant theme in Valencia games. How if their attack breaks down at the first phase of play they become easy to play through. This is a possible reason for Jose Bordalas switching to a back three. For extra coverage defensively.

Although keeping a defensive structure behind the play is important to help defend against counterattacks. Another issue for Valencia is how disorientated their collective press has become.

A Jose Bordalas attacking principle is to get the ball forward quickly. Then for the team to collectively position themselves around the play to win the second ball.

As Real Betis manage to clear a long ball William Carvalho wins the second ball. Valencia have four players attempting to close Carvalho down. Real Betis have two players between the lines and two players available to attack out wide. 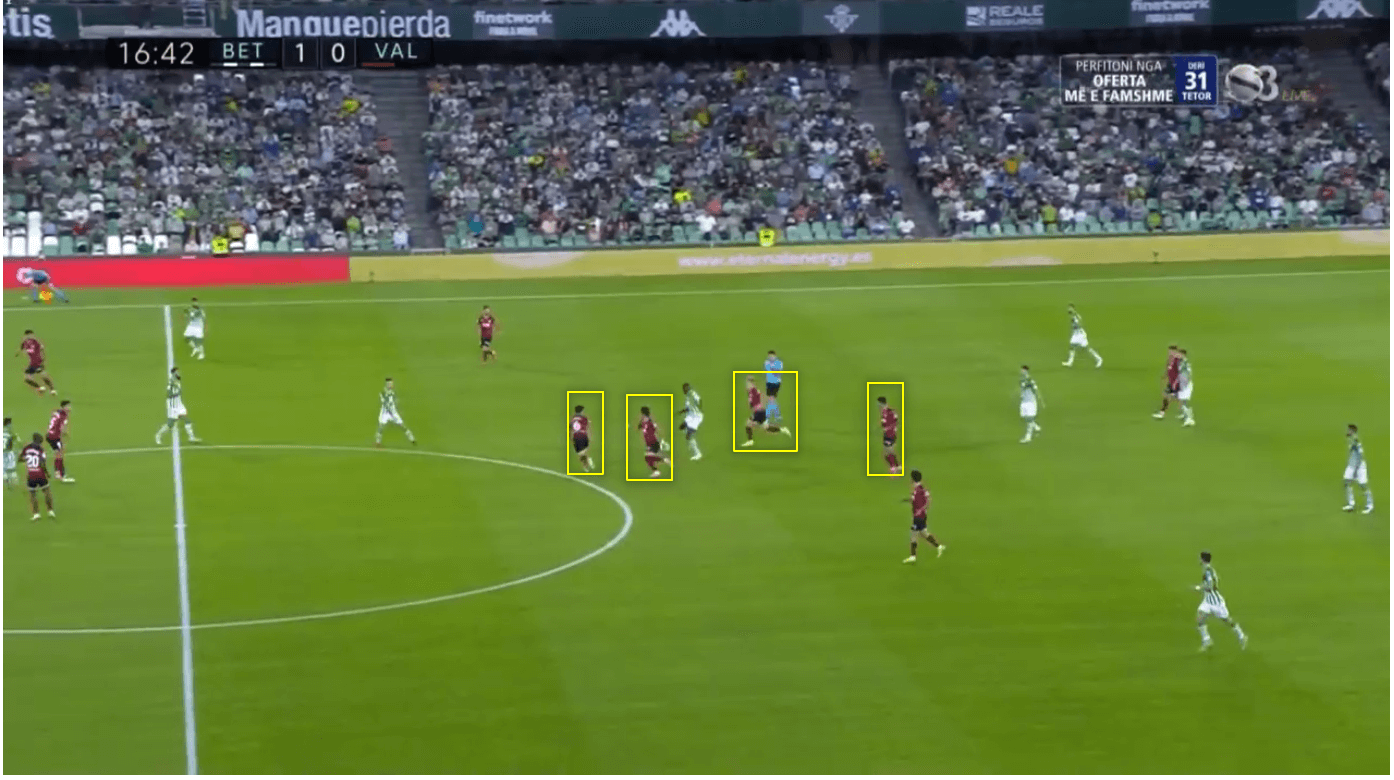 Betis are then able to counter-attack with a 5v3 advantage. 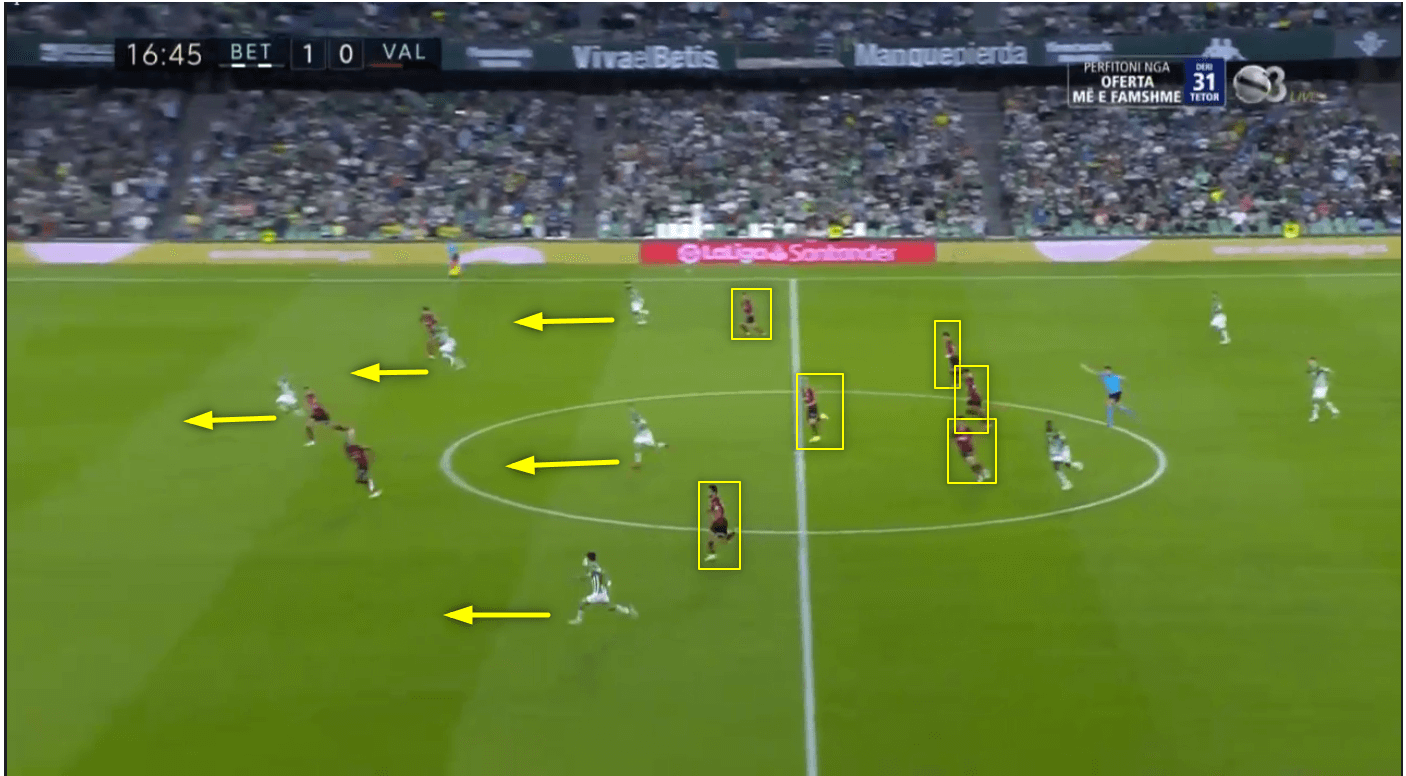 Another concern for Jose Bordalas will be how easy the opposition creates space within his defensive line. Once teams break into Valencia’s defensive third, defenders are struggling to control good movement. Especially in half-spaces.

When Valencia operate in a 4-4-2 formation they were having difficulty with wide players moving inside. You can see how Álex Berenguer occupies the half-space. By moving here it immediately catches the attention of Gabriel Paulista who moves towards the ball. The problem with this is the space his movement creates between him and his centre back partner. Once Álex Berenguer receives the ball crosses the ball into the area marked. 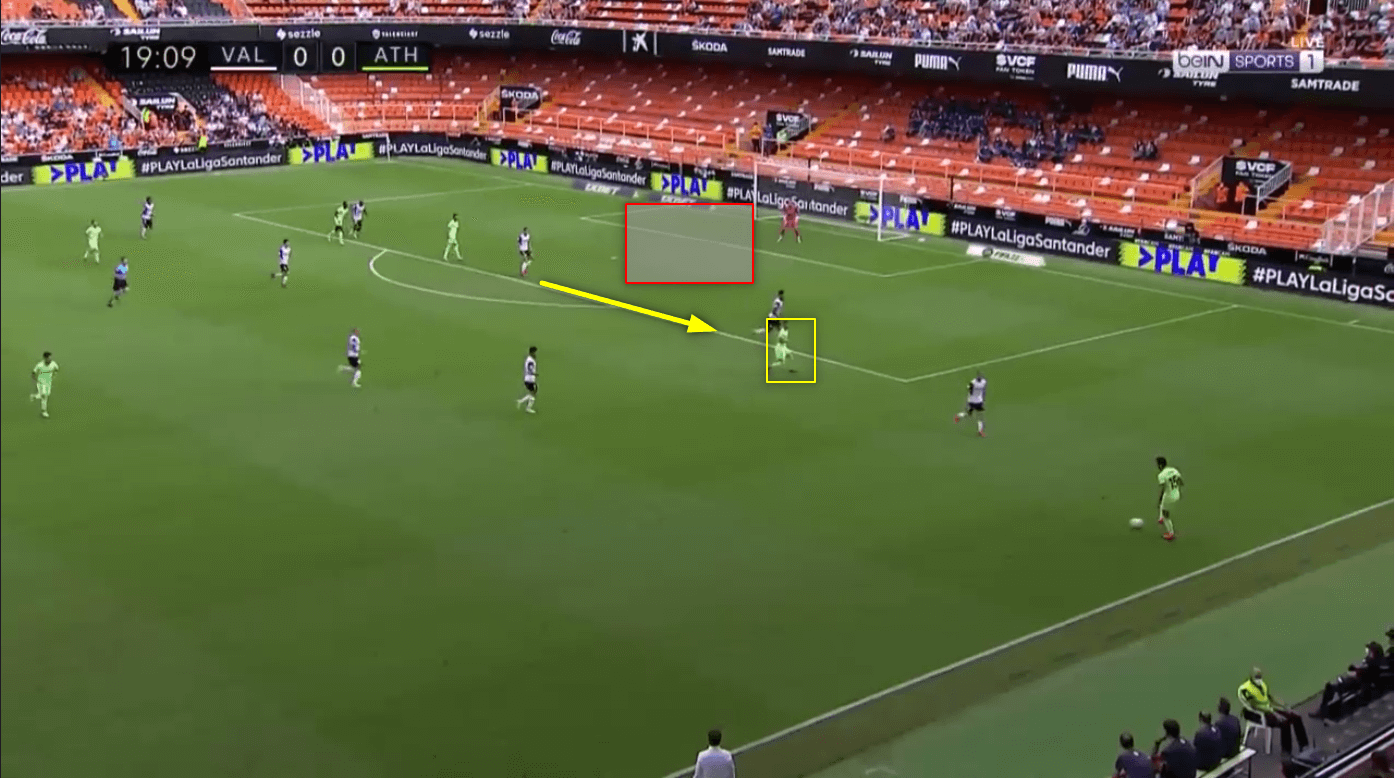 The same principle applies here as Real Betis striker Juanmi takes up his position in the half-space and looks to make a run in behind Dimitri Foulquier. This time his movement is a decoy to stop Foulquier from being able to close the ball down. His run also pulls Gabriel Paulista further away from his centre back partner creating more space for Real Betis to attack. 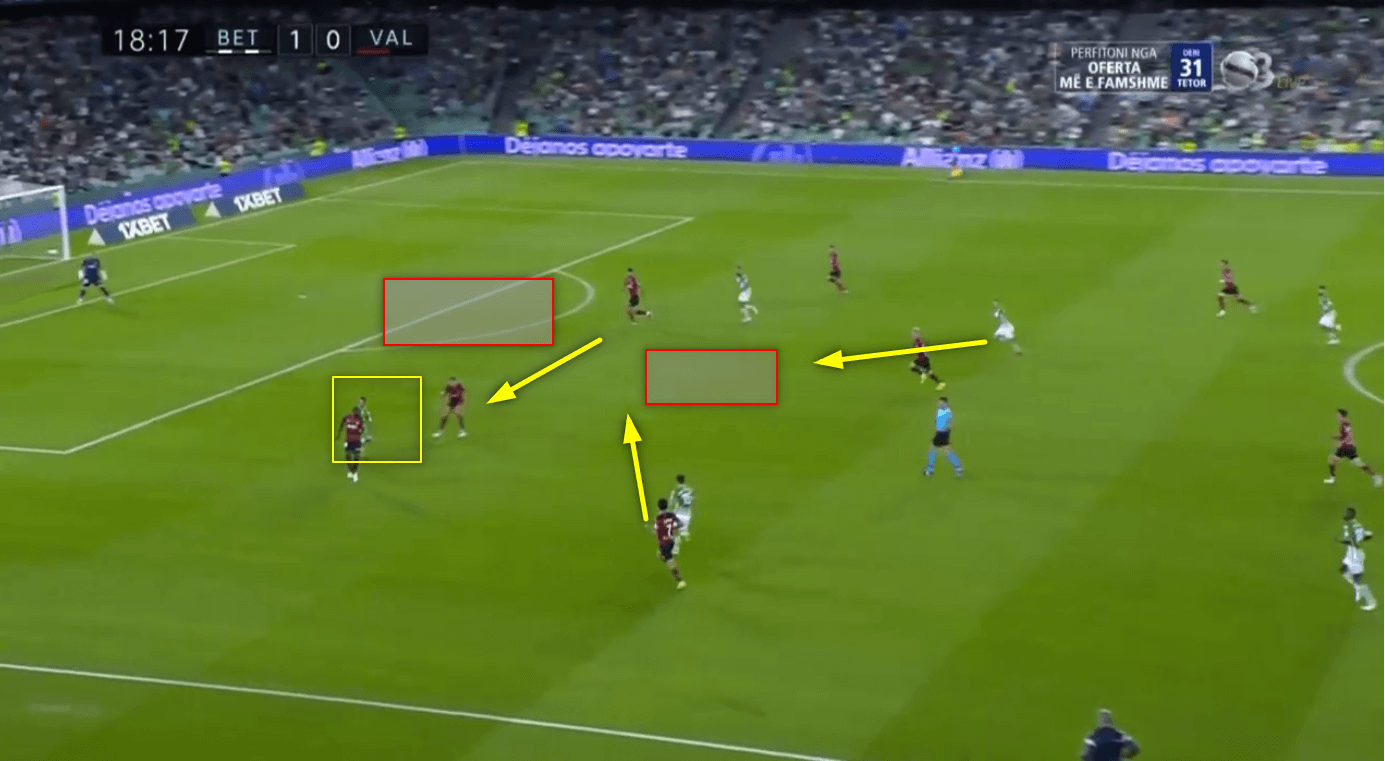 In both scenarios, both Real Betis and Athletic Bilbao have forwards positioned between the centre back and full back on each side. Its become area opposition teams have looked to expose. It’s another reason for the switch to back three. This movement can be tracked by the centre back on the outside without the worry and opening up further space as he has additional cover.

Jose Bordalas and Valencia remain a work in progress. The team are currently on a run that has seen them win one game in nine and the pressure is starting to build. With one game remaining the highest position they can finish is ninth. The lowest position they could finish is twelfth.  Given the troubles the club still face off the field it would be too early for the club to sack Bordalas.

This analysis focuses on the key components of the tactics that Jose Bordalas has implemented at Valencia this season.