In a season which has seen Everton fall to the brink of relegation, Anthony Gordon’s emergence has been a shining light for the blue half of Merseyside.

After spending the part of last season on loan at Preston North End this season has been a breakthrough season. The twenty-one-year-old made thirty-three appearances across all competitions scoring four goals and getting three assists.

The fearless winger is a product of the club’s youth academy. He has established himself as a pivotal member of the Everton first team and has featured in the last three England u21 squads. Playing two hundred minutes out of a possible 270 and scoring three goals.

In this scout report, we will provide a tactical and statistical analysis which focuses on the attacking and defensive phases of Anthony Gordon’s game.

Positioning and off the ball movement

Anthony Gordon has shown he can be equally effective playing on either wing for Everton this season. Both Rafa Benitez and Frank Lampard have used his versatility throughout the season and have switched him between flanks on a regular basis.

This heat map shows the average position on the pitch that Anthony Gordon has picked up during the season. Positionally you can see his movement and the spaces he likes to occupy. 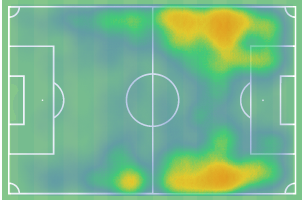 Whether Anthony Gordon is playing on the right or the left there is a lot of variation in his movement. He can move effectively between the outside channels and the half-spaces picking up the ball in pockets of space that make it very difficult to defend against.

He has very good football intelligence for a player of his age group. When Everton looks to attack his off the ball movement into specific areas of the pitch is very quick and decisive. Often disrupting his opponent’s defence.

Traditionally a winger’s movement is judged on how well he moves vertically behind the full-back. Anthony Gordon has the pace and power to run in behind. However, what is also very notable about his movement is his ability to move across the defence and into spaces. This pulls defenders from their defensive set-up.

Below are two examples of Anthony Gordon’s movements in the recent game against Leicester City.

His starting position is marked. You can see how he pulls Leicester’s left-back Timothy Castagne inside and then quickly changes the direction of his run. This movement inside creates the space on the outside channels for Gordon to run into Alex Iwobi to pass. 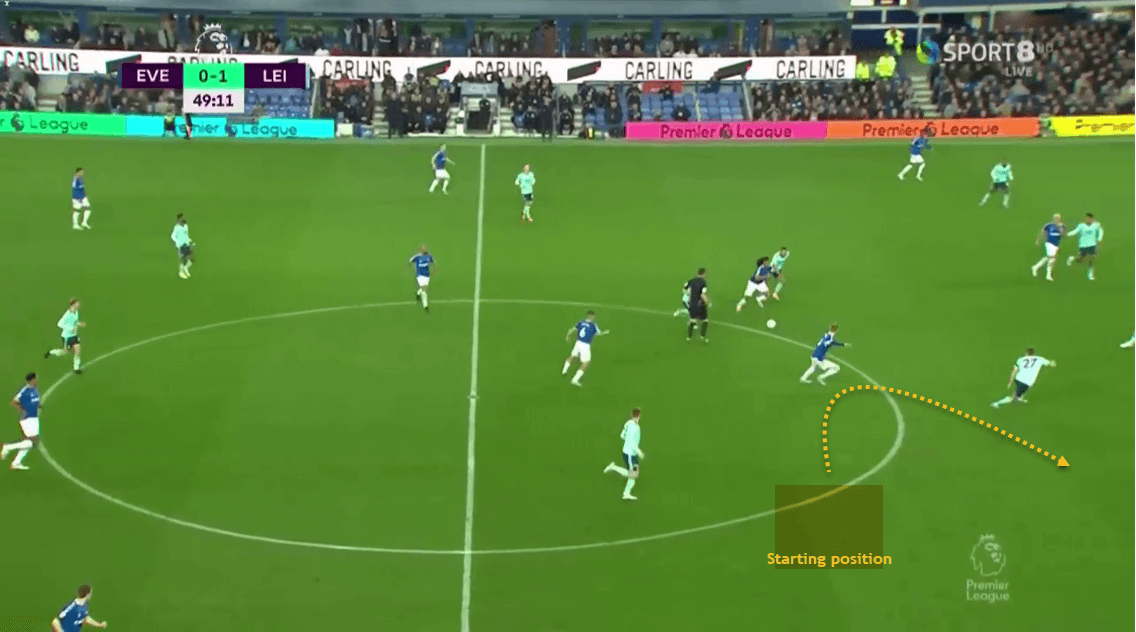 Once again you can see Gordon’s starting position here. Alex Iwobi has picked up a good position behind Leicester’s midfield. Anthony Gordon’s movement drags Ricardo Pereira inside but this time he attacks the space by running diagonally behind Wesley Fofana.

The clever aspect of his movement in this scenario is the effect it has on the play that surrounds him. His run stops the centre backs from being able to close the space in front of them. It opens space for an overlapping run on the outside. 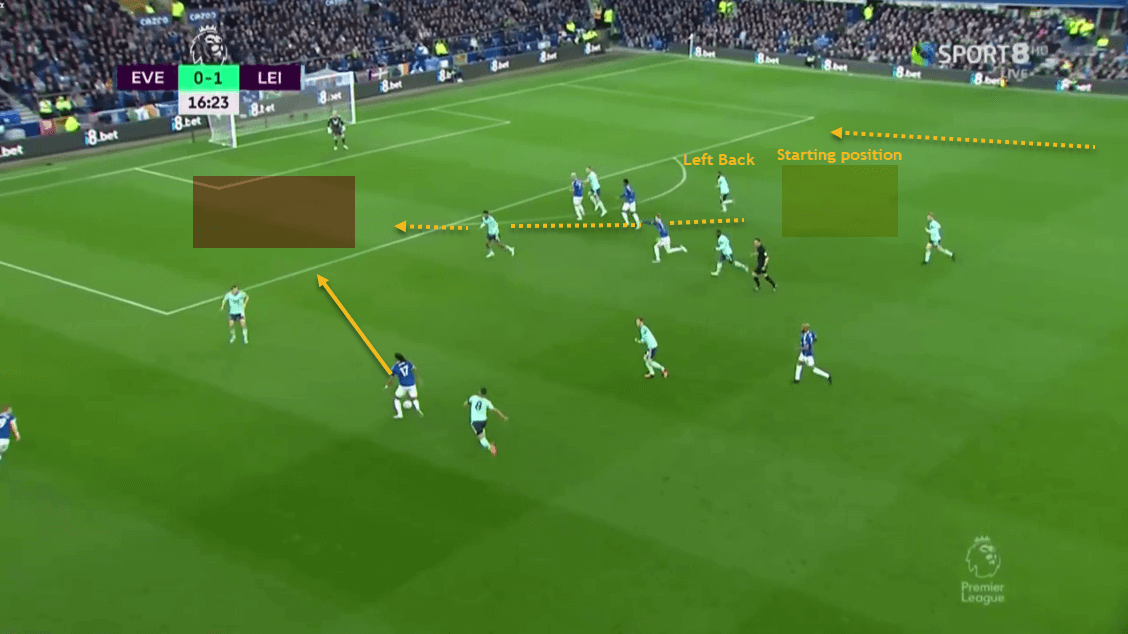 Interestingly in this game, Brendan Rodgers felt the need to swap his fullbacks around. This was to counter the impact Anthony Gordon was having from out wide

Once in possession of the ball, Anthony Gordon attempts to show the same composure and intelligence as he does when out of possession. Especially when he is dribbling and attacking defenders.

Its shows the productivity and effectiveness of Anthony Gordon’s dribbling ability when compared to all the other wide players. Each player within the analysis has played over 900 hundred Premier League minutes 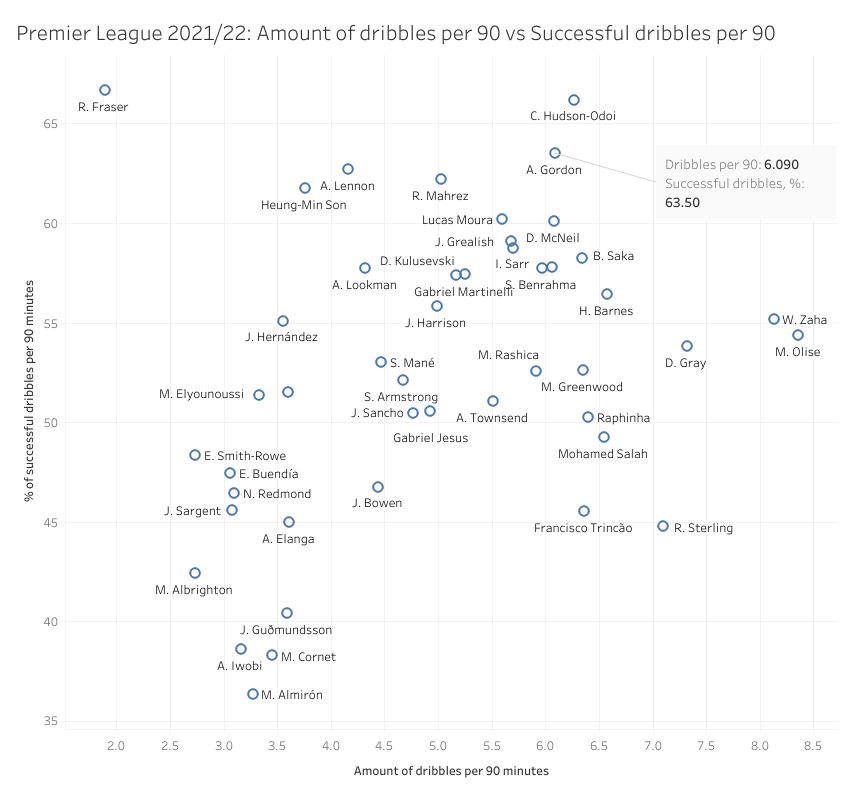 The data shows Anthony Gordon attempts on average 6.09 dribbles per 90 minutes he plays. Whilst having a success rate of 63.5%.

His success rate is the third-highest in the premier league this season. Considering he is in the top ten for the number of dribble attempts, this is very encouraging for a twenty-one-year-old experiencing his first full season of Premier League football.

Although this part of his game is still raw, he shows particularly good spatial awareness when dribbling. When he picks up the ball you can always see how and where he intends to attack the opposition’s defence. He is very decisive and often shows himself to be a quick thinker. Which is vital for any wide player playing at this level.

This example shows Anthony Gordon dropping deep and coming inside to receive a pass. As he does this, he is fully aware that Jonny Otto the Wolves wingback is closing the play from behind vacating the space on Everton’s left-hand side. Once Gordon takes the ball around him, he progresses the play into the attacking third. 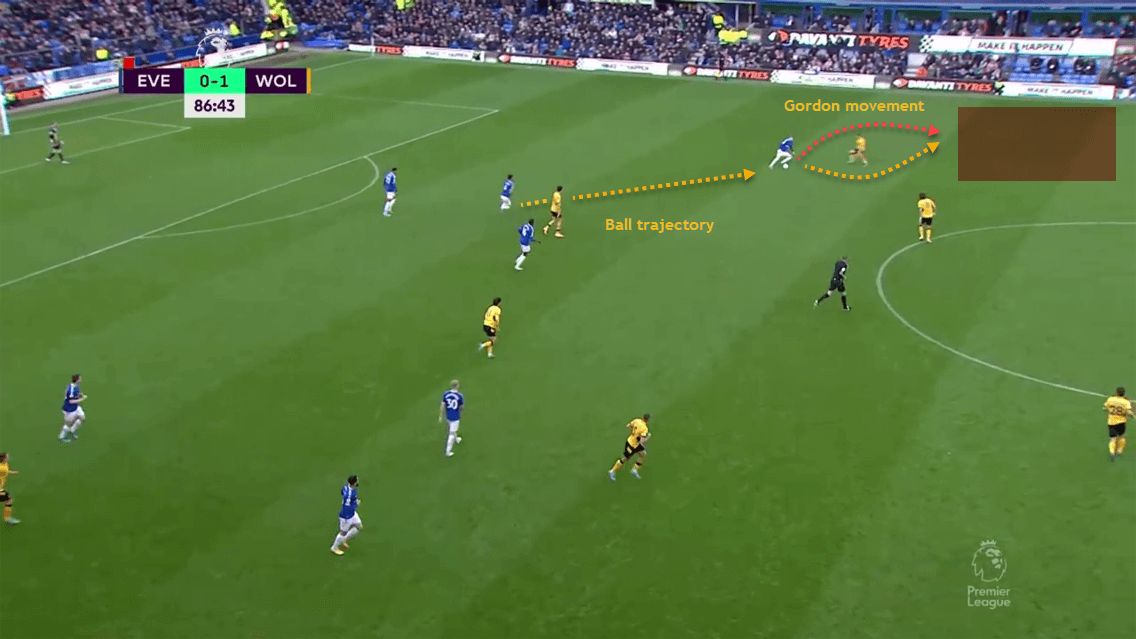 In this passage of the play, he lets the ball come across his body and insinuates he is looking to run down the outside of Leicester City’s Timothy Castagne. Instead shows good agility and balance by turning sharply inside and dropping his shoulder to make Mendy and Fofana look like he is running through the centre. 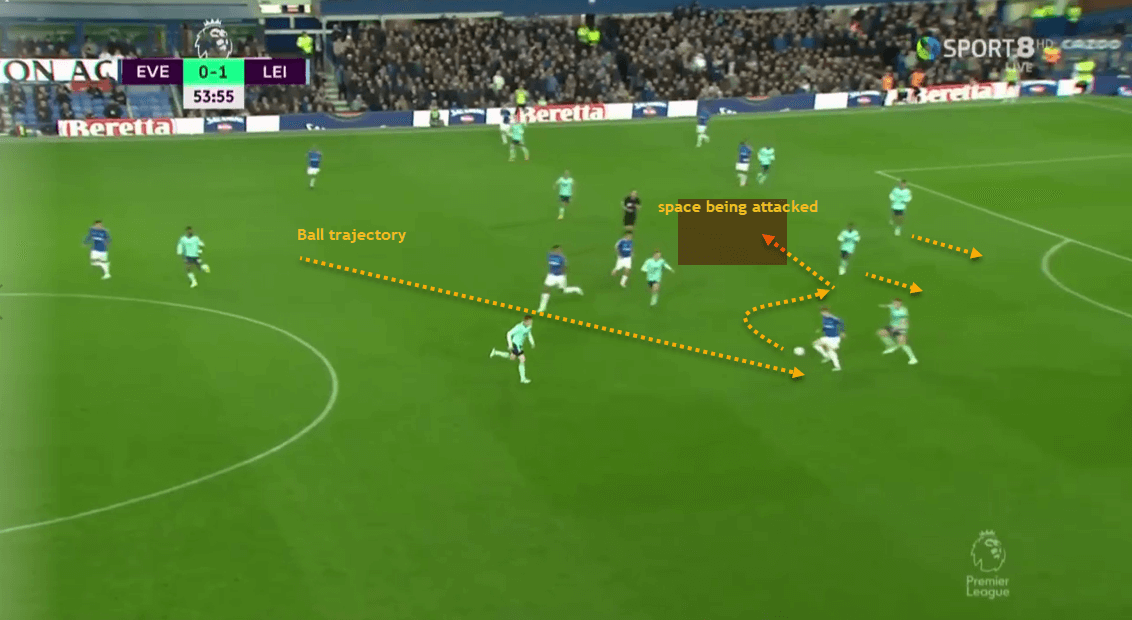 Both examples show his dribbling ability but also highlight how he sees and attacks space.

Statistically, his crossing is not as productive as his dribbling stats, but Anthony Gordon has incredibly good technical ability when it comes to crossing the ball.

Whether it be on the right flank, the left flank from a dead ball or a moving ball, Gordon has shown he not only has the technical ability but has shown he has creativity to become a valuable player when delivering from wide areas. He averages 2.89 crosses per 90 minutes and is successful with 30.77%. When compared to the other wide players in the league his performance is on the average point. 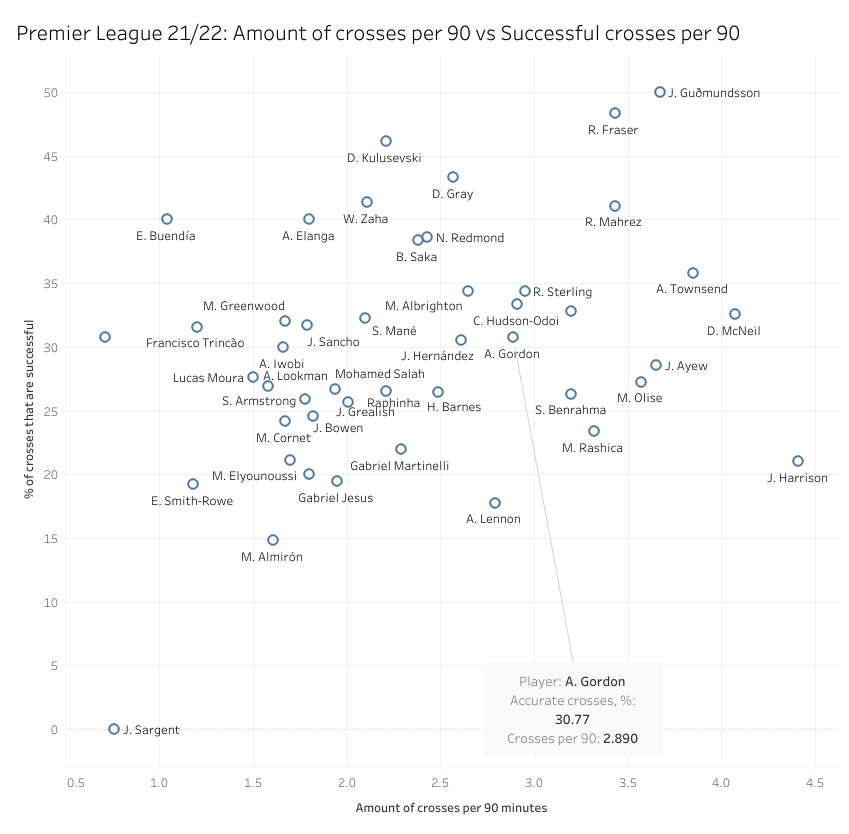 However, when providing analysis on an individual player crossing data, the statistics must be put into context as there can be mitigating factors.

When a player is crossing the ball, it is his job to cross the ball to the required area. It is then the job of the players attacking the penalty area to run to the area and meet the cross.

With Dominic Calvert Lewin missing most of the season with injury problems and Richarlison being injured at various stages. Everton’s attacking play has been very stagnant and inconsistent. Everton’s wide players have suffered because of this as there has been no fluidity with their attacks.

These next two images show good examples of Anthony Gordon’s ability to cross the ball into vital areas and Everton failing to capitalise.

There have been several occasions throughout the season that show Gordon’s technical ability and creativity when delivering from wide areas.

The area marked in red is the area at which the cross arrives. Michael Keane reacts too slow, and Seamus Coleman arrives too late at the back post. The cross is delivered to a good area. If you look at the position of the Newcastle goalkeeper and the centre back Dan Burn, they would not have been able to react. 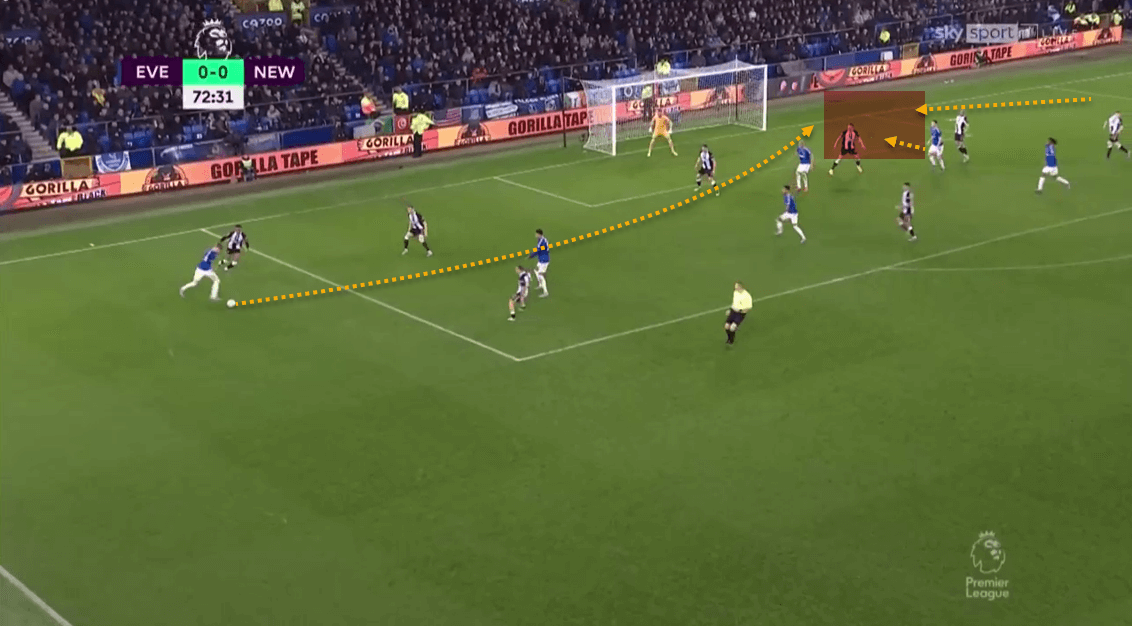 Here he catches Tottenham’s defence out as he delivers the across along the floor in front of them. You can tell from their body position that Tottenham’s defenders are expecting the cross to be played across the six-yard box. 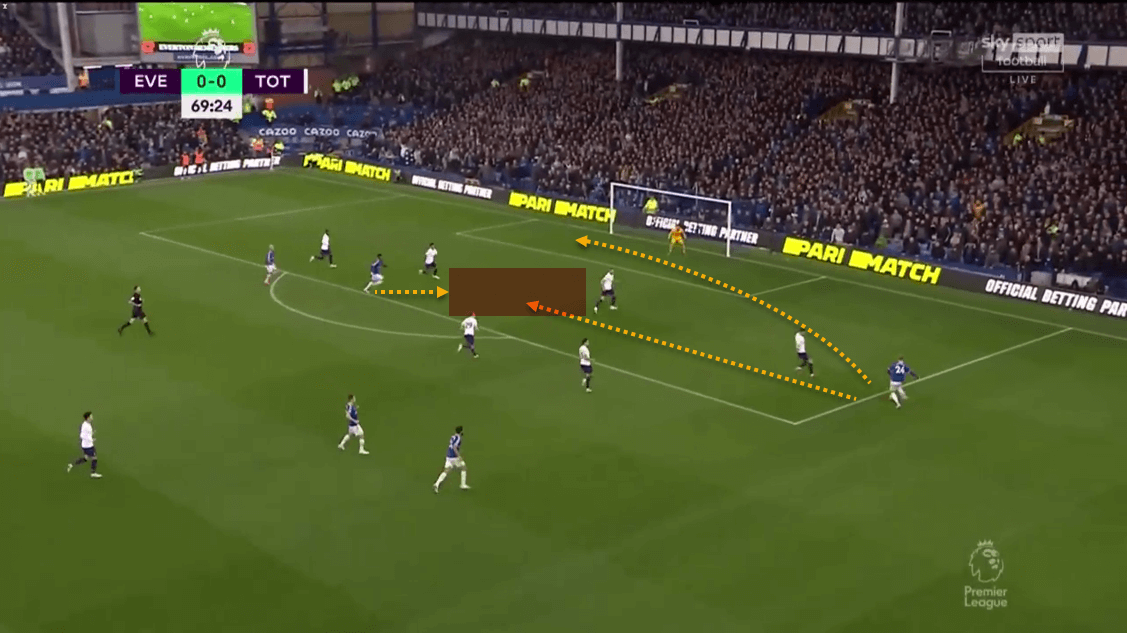 Instead, he plays it towards Demarai Gray who just anticipates it too late.

The twenty-one-year winger has shown himself to be just as important for Everton when defending. His energy, pace and determination all play an important factor when he looks to close down the opposition’s play. His ability to win the ball and pressure the opposition is at a very good standard for a player within his age range.

Pressing in wide areas has become an integral tactic for many teams around the world.

The data analysis measures how many interceptions per 90 minutes the wide players have made in the premier league this season. It’s been measured against the PAdj value.

A player can only make a defensive contribution when he does not have the ball. Therefore the players who play for teams that hold most of the possession in games wouldn’t show as being effective when defending.

You can see how effective and important Anthony Gordon is for Everton when they are against the ball. He makes on average 3.92 interceptions per 90 minutes and his PAdj value is the fourth highest in the league at 4.66 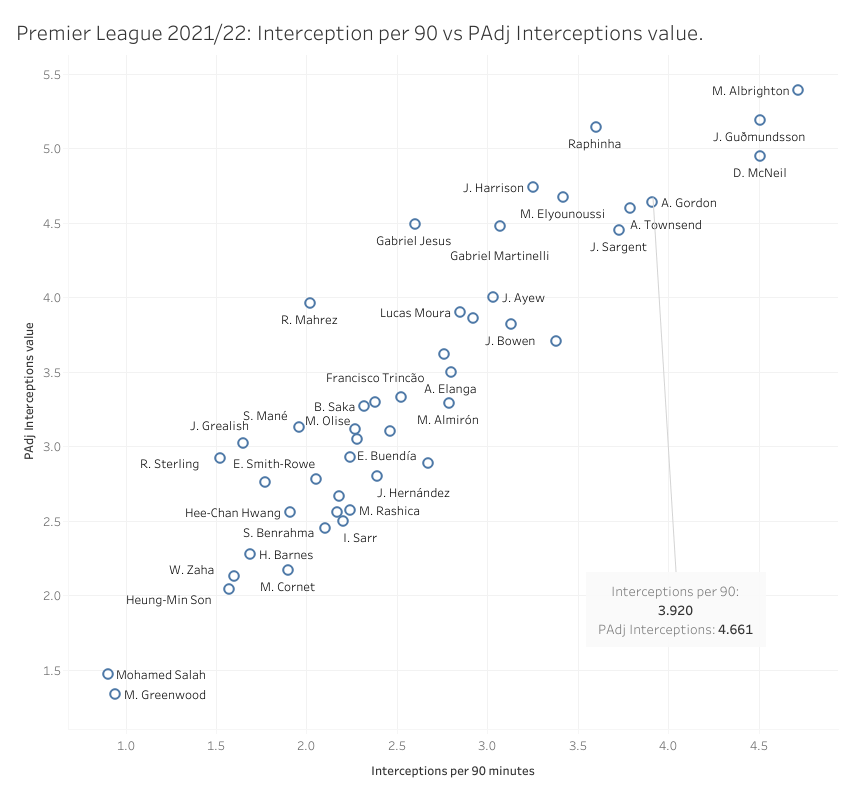 Under Rafa Benitez, Everton was a defensive team with structured attacking play. They looked to keep compact and remain in shape. Since Frank Lampard took charge, the team’s defensive phase of play has seen more variety. There have been games that have also looked to keep the shape and remain compact and played with a low block.

However, there have also been times when Everton has looked to press high. Although they have not pressed most efficiently at times they have played higher up the pitch and shown more aggression in winning the ball back. This suits Anthony Gordon more.

Anthony Gordon is involved in 7.8 defensive duels per ninety minutes. A defensive duel is when a player attempts to dispossess an opposition player to stop an attack from progressing. He is the second-highest in the league

Even though he is not one of the players with the highest success rates. He still wins 56.93% of his defensive duels. 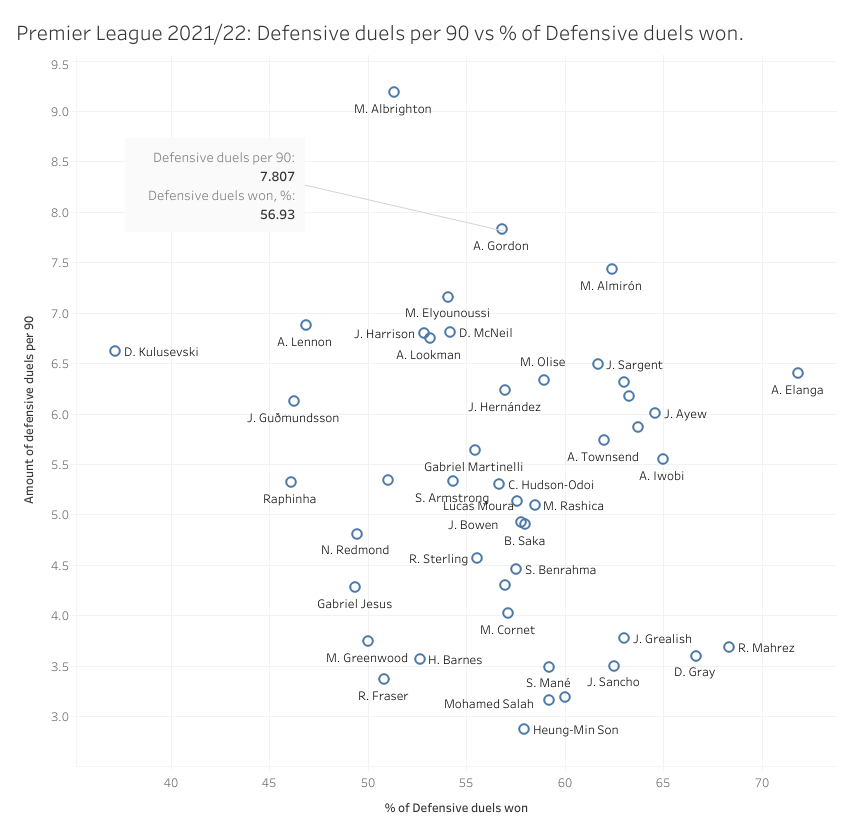 A modern-day winger can no longer afford to be one dimensional. They cannot be a player that just occupies the space on either flank. They cannot only become involved in the play when a 1v1 opportunity presents itself or via a counterattack.

Modern-day wingers must be able to come and join the play and create their own space with their movement and play an integral role in the first line of defence.  Anthony Gordon possesses all these qualities. He has been Everton’s standout performer this season and has been a highlight for England’s U21 team.

In this scout report, we have provided data analysis and tactical analysis to identify key tactics within Anthony Gordon’s performance.