The Serie A title race of 2021/22 has entered the final road, as AC Milan and Napoli are chasing Inter to take the throne off from the champion. This week, Stefano Pioli’s side travelled away from home to the capital to challenge Lazio. It won’t be an easy game as they were fighting for a European seat as well. As it went on, Ciro Immobile scored an early goal and gave AC Milan a difficult start, but Pioli managed to make some on spot in-game adjustments to nullify the opposition, taking the game in their direction.

This tactical analysis will demonstrate how Milan adapted to the opposition both offensive and defensively in the game.

Lazio’s thin squad suggested they did not have many options, especially given Pedro Rodríguez was injured, so they put Mattia Zaccagni as the left-winger, while the rest of the squad was more or less the players. However, Sarri chose Ștefan Radu as the left-back, starting Elseid Hysaj and Adam Marušić on the bench.

Pioli of course played his team in a 4-2-3-1 formation, they had more options – Zlatan Ibrahimović and Ante Rebić started on the bench as Brahim Díaz and Olivier Giroud could start, alongside Junior Messias and Rafael Leão as the wingers.

Lazio were able to get a good start with some sharp passing streaks, their emphasis on first-touch passes, quick thinking, and verticality in possession, in the beginning, is something you should not be surprised by “Sarri-ball”. 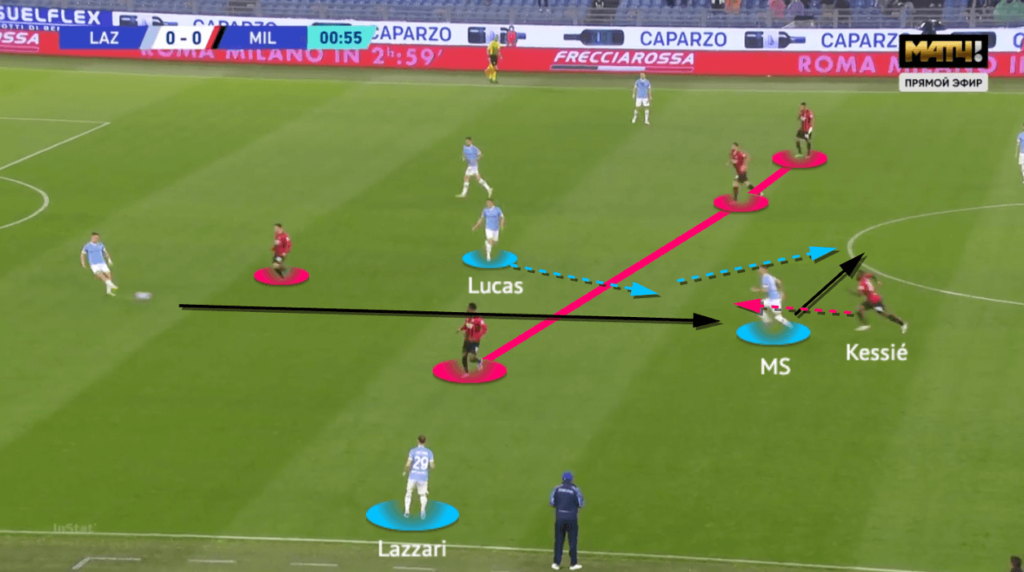 As usual, Lazio played with a very symmetrical shape, 4-1 in the build-up with deep full-backs, two 8s to play behind the second line, and generally wide wingers pushing the last line with Immobile. The problem for Milan was their 4-2-3-1 pressing and midblock shape was too predictable, and they were lacking the intensity in the early stages, which allowed the opposition to play past the press on several occasions.

Here, you could see the impact of Sarri’s deep full-backs in the build-up, as that player (Manuel Lazzari) would drag the winger wider to open the half-spaces passing channel. Then, they have the 8 (Sergej Milenković-Savić) as a “moving wall” to play lay-off, releasing the third man to further progress the attack, as he brought Lucas Leiva into play in this example.

Also, we can observe Leão’s body orientation, which was suboptimal as we would explain later; meanwhile, Franck Kessié was not tight enough on Milenković-Savić so the Lazio 8 was playing in front of him quite easily. 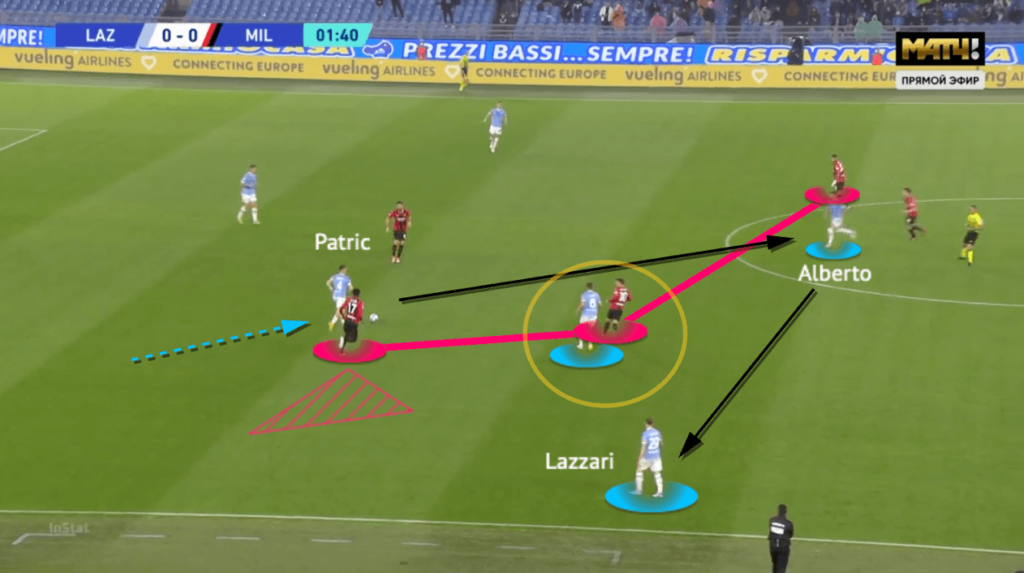 In the early stages, Milan wingers were also trying to press Lazio centre-backs from the outside as we show above. Leão was instructed to use his body orientation to cover the full-back while putting pressure, and it was also a way to compensate Giroud’s low intensity in the pressing. However, that strategy could not stop Lazio’s vertical third-man plays to use wide spaces and deep full-backs.

Here, as Lucas manipulated Díaz’s position to open a passing lane to the dropping 8 (Luis Alberto), Lazio could very quickly release the Lazzari in the outside zone. Since Leão was with Patric initially and Felipe Anderson occupied Theo Hernández, there was no one to close the right-back unless Kessie jumped out from the centre, which was not ideal as then Milenković-Savić would be unmarked. 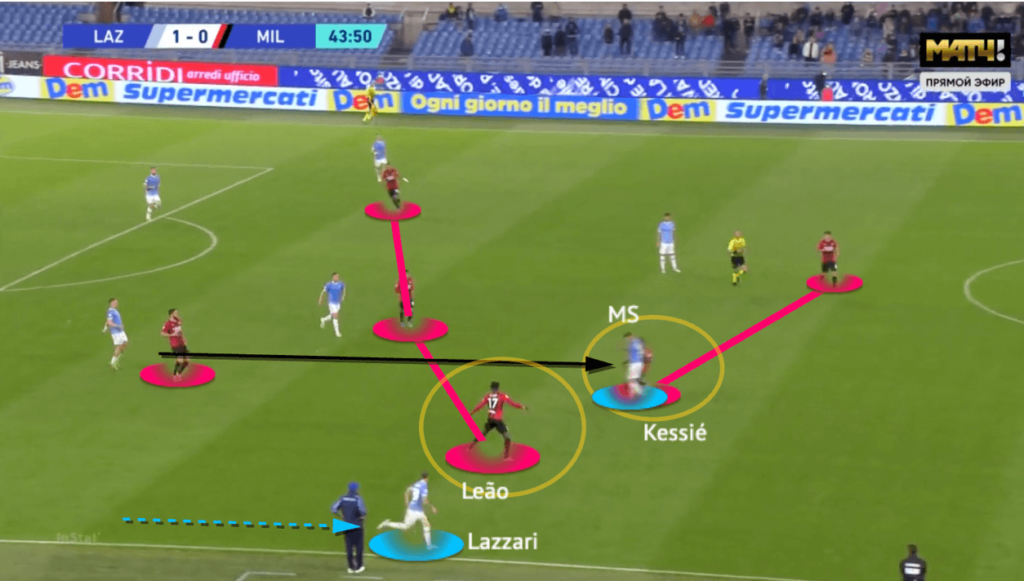 But the happy time of Lazio was very short as Pioli made adjustments to help his team, without shaking the 4-2-3-1 structure that has been used for years. Firstly, the most important is the defensive midfielders must be able to close the 8, as we could see Kessié being much tighter and aggressive on Milenković-Savić as the game developed, also in the above scenario.

Also, they tweaked the winger’s role and more importantly, the body orientation during the press. Leão was no longer required to close Patric, and he was much more aware of Lazzari’s presence. Hence, the Portuguese international intentionally lowered his position a bit to close that third-man passing lane to the outside, as we have shown above. That was a very successful change as Milan protected that space much better and limited the rooms of Lazzari as the game went on. 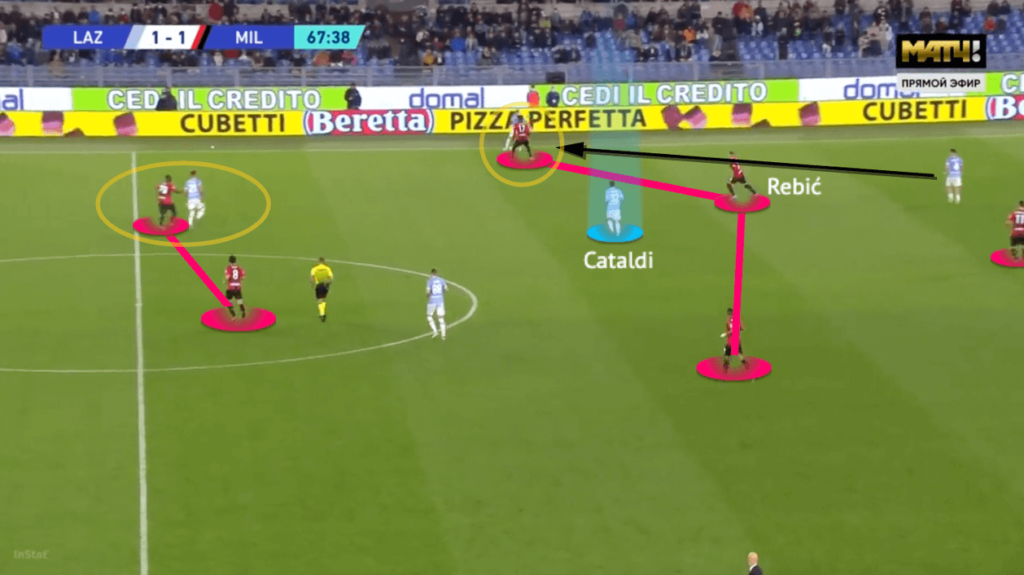 Lazio looked really tired and therefore Sarri made some early changes, one of the players coming from the bench was Danilo Cataldi, who injected energy and better supportive movements to help the build-up, but Cataldi’s impact was limited by the Milan’s 10 to a larger extent. And more importantly, Milan grabbed Milenković-Savić and Lazzari very well by blocking them closely without the ball, as we have shown in the above image. That made Lazio’s build-up difficult as even Cataldi was available between the lines, there was no angle for Lazzari to find him as Leão was doing his job.

Lazio’s press could not contain Milan

Compared to Milan’s intensity in the press, without the ball, Lazio were also performing below par as they were unable to win the ball back from the opposition effectively, they let Milan dominate the game and constantly enter the last third. 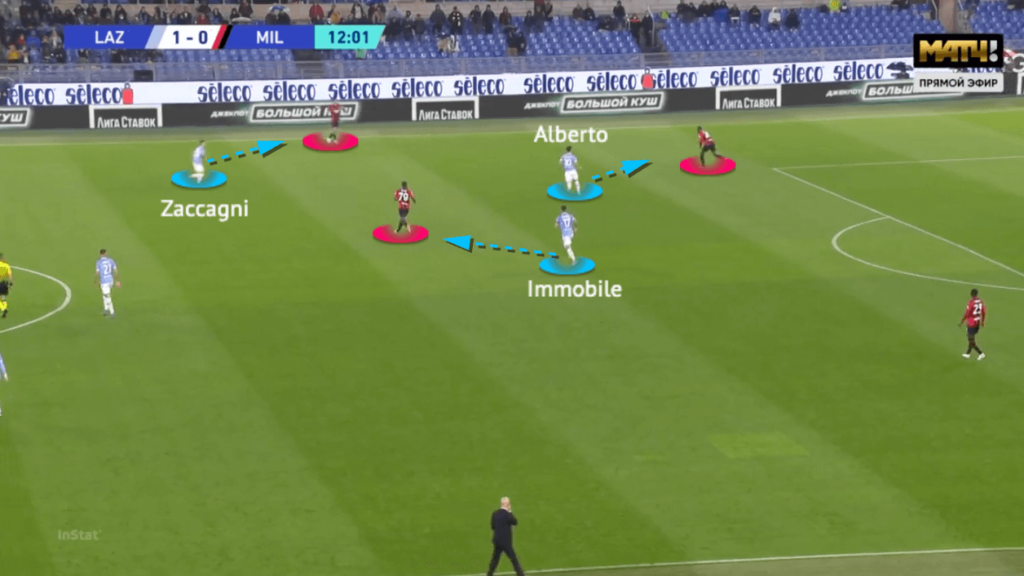 Firstly, Sarri kept his side in a middle-high block but not going too high to press, as they did not want to expose the last line by placing that so high. Also, they wanted to prohibit Milan’s access to the centre by closing Kessié with the concerted efforts of striker and 8. For example, Alberto went out to press the centre-backs here, so Immobile tracked back to cover Kessié. Meanwhile, Lazio winger, which was Zaccagni in this image, should always jump out to press the wide player diagonally. That should be a straight run but both wingers were lacking the intensity to close the angle in this game.

In order to maintain a compact shape, their far side winger, mostly Anderson, always dropped to a very deep and inside position, almost parallel with the 6 without the ball. 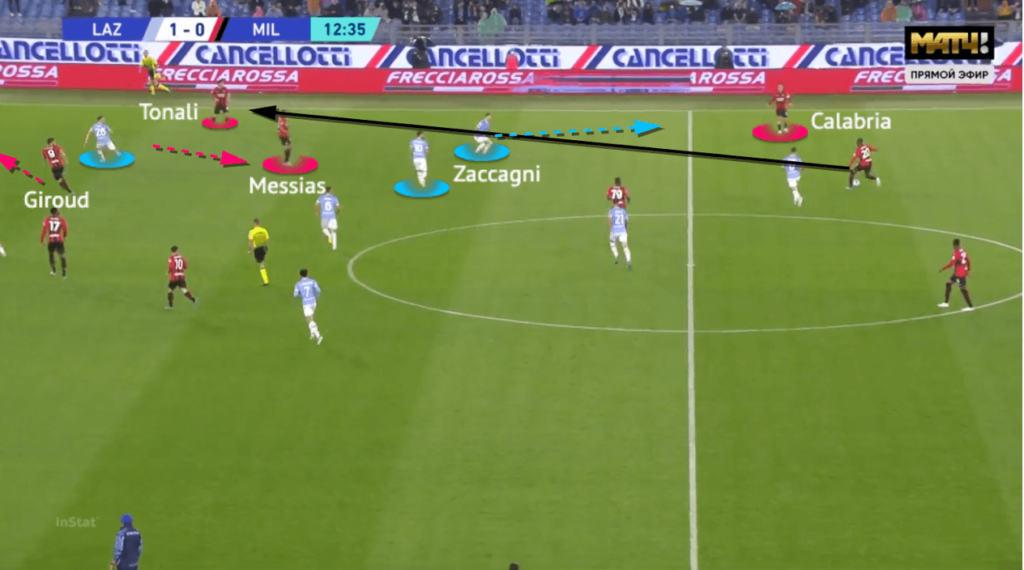 Well, the inability to close the angle might not be 100% the fault of the wingers because the Milan shape was quite good as well, Piolo approached this game with a very clear idea of playing and they targeted Lazio’s left side to attack. By doing so, they always put two players in front of Radu, Messias would always be there, while sometimes they overloaded that zone with Díaz, Giroud, or even Sandro Tonali’s forward runs. Meanwhile, Milan also kept Davide Calabria in a deeper position to lure the winger out, so it became positional chaos for Lazio as Zaccagni might be dragged back a little bit, but then he was required to close the right-back. Lazio were stretched vertically and these enlarged distances of travelling made them slow to access the targets during the press.

In addition, Milan was hugely benefitted from the good ball-playing and confident display of Pierre Kalulu, who constantly sent forward passes to find the players in spaces to make sure that tactics worked. 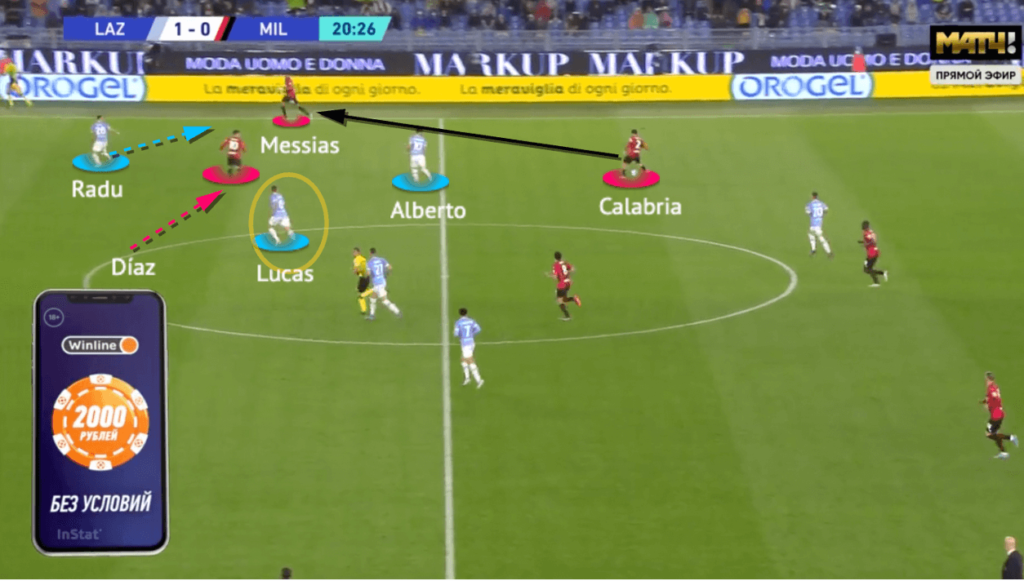 In fact, the reason why Lazio kept suffering in this scenario is because of the 6’s immobility to move. Lucas was too old to cover huge grounds in the game, he did not have the intensity to move into wide spaces, or support the press aggressively by closing options down.

This image above would further prove the argument, as Díaz roamed from his number ten position to the right half-space, Lucas was unable to close that space, so it became a 2v1 in front of Radu with Messias receiving Calabria’s pass. 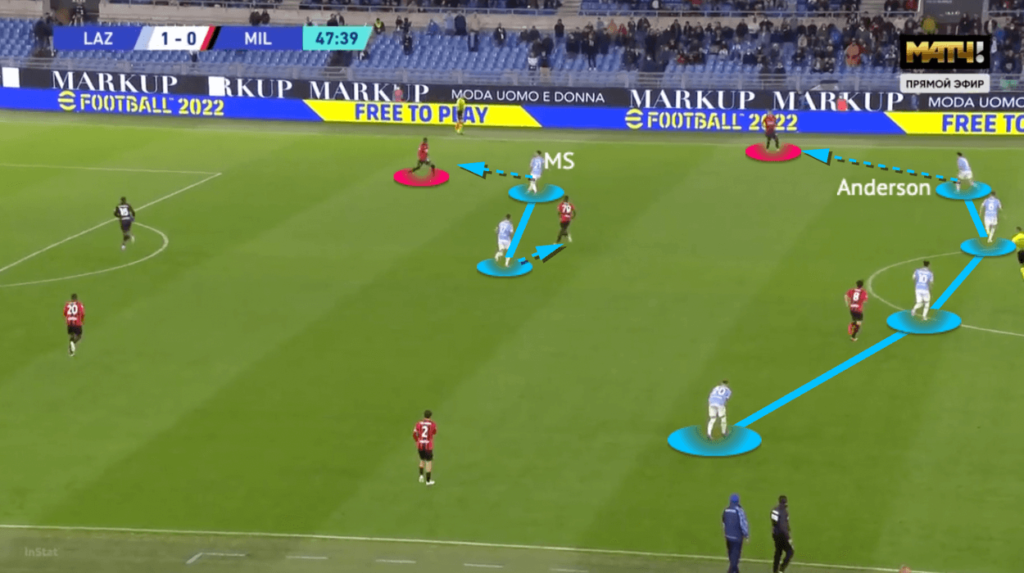 Hence, to cut Milan’s comfortable passing streak, Sarri’s Lazio changed their pressing and midblock a bit to pose different questions to the opponents. They wanted to limit Milan’s centre-back when they had the ball, and the shape became more a 4-4-2 with Milenković-Savić joining Immobile in the first line, doing the “pressing and cover” work as we have explained above. Then, the second line should swing with the wingers being deep to provide the balance, as Anderson would drop back a bit to protect space as usual, but he still made that diagonal press when the ball was sent to the left side. 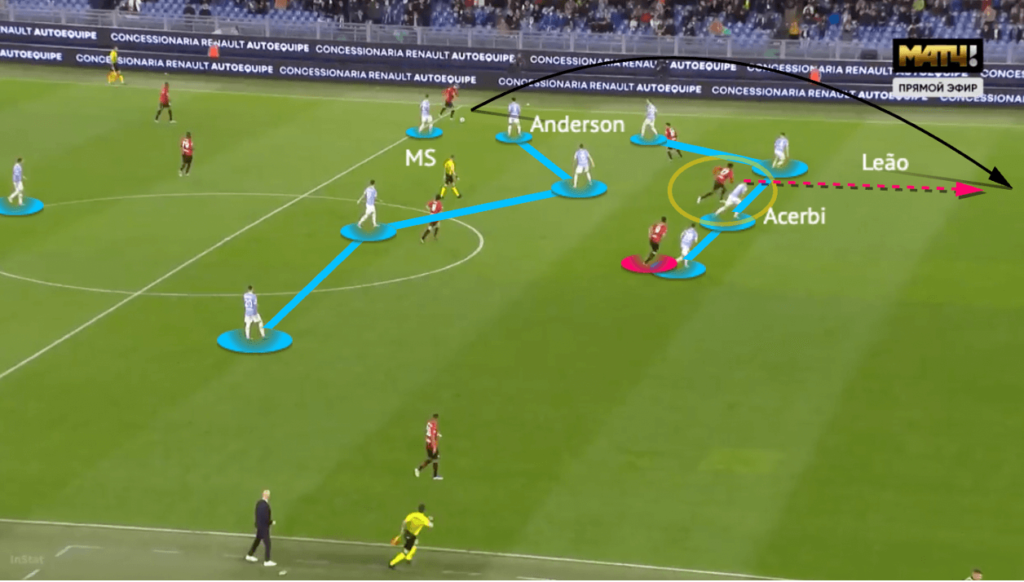 But that adjustment became the culprit of the Giroud goal, as both Milenković-Savić and Anderson were unable to close the angle of the player on the ball, and Anderson’s deep position was certainly a factor. Meanwhile, it was also a sharp contrast of how Milan players possessed the quality to outplay the Lazio defenders as Leão showed sharp physicality to beat Francesco Acerbi. 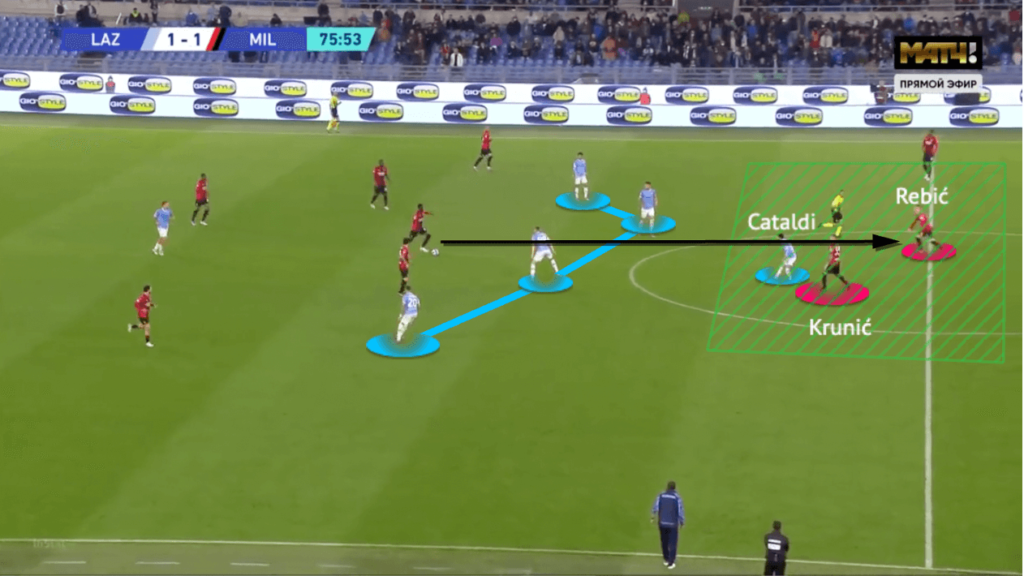 Milan also abandoned the initial plan to put players to attack the right side, as they discovered another weakness of Lazio after the substitutions. Cataldi was often orienting himself closer to the midfield line in their 4-1-4-1, and given the Lazio players were not applying pressure on the ball, Milan found themselves quite comfortable breaking the lines.

To exploit that 4-1-4-1 shape, Milan put more players to form the 2v1 overload on Cataldi, not the right side anymore, it was mostly Rebić plus one more player in that space, which could be Rade Krunić as we have indicated above, Kessié in a higher position, or even Hernández on occasion. Basically, in that period until Milan scored, Lazio had no way to counter the opponents and the game has fallen into Milan’s hands. 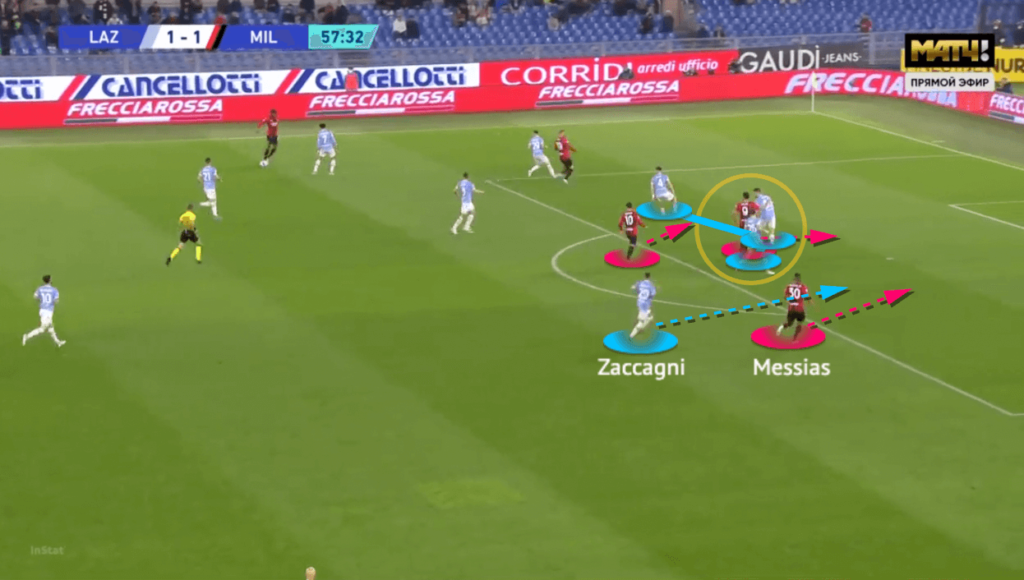 And Milan should be given huge credits for the goals they scored as well, they were very willing to put players into the penalty box and exploit the back four of Lazio. Pioli probably knew the weaknesses and behaviours of Lazio’s defensive line, which their full-back stepped up very early to close the wide spaces, but without a 6 who could fill in the gaps, the remaining three in the backline were quite exposed. That’s why Milan always wanted to throw players into the penalty zone to exploit spaces outside of the last line, with other players such as the 10 and striker pre-occupying the space in advance. In the above image, it was Messias who lurked behind Radu and if the delivery arrived, that was a clear-cut opportunity. Lazio could only rely on the individual efforts of players to track back to keep balance in the shape, but it was very difficult for them.

As usual, and we have pointed out in this analysis, the games in Italy were always very tactical. The head coaches were always calculating the details carefully, very willing to change to adapt to the opposition, not only before the game, but also during the game to make sure they were superior in terms of the tactics. This time, Pioli’s Milan were the better side as they used different strategies, and of course, a much better bench to outplay Lazio. Sarri has been talking about the squad needing new blood to play his football since the beginning of the season, under the current condition, it was a bit difficult for them as they were stressed mentally and physically already, it would be uneasy for them to secure a European seat after this game with only four games remaining.