Yeremi Pino 2021/22: The teenage winger Liverpool must be wary of – scout report

As the Champions League Semi-Finals approach, Yeremi Pino is a name that will become more familiar to fans of football less familiar with the Spanish La Liga. However, for La Liga fans he is someone who has been well known as an exciting young talent for some time. In fact, 19-year-old Pino is already a fully-fledged international with the Spanish national team, and has already notched his first international goal.

Pino is a skilful and pacy right-winger, who is often intense with everything he does when in possession. He has had a highly productive season so far too, with eight goals and four assists for club and county at senior level football.

This scout report and tactical analysis will provide an insight into the winger’s key traits, giving an analysis of where he is best and what team tactics he suits.

To begin with, we can look at his general positioning to see his preferred areas on the pitch and where he is most effective. Unsurprisingly for a winger, his heat map shows plenty of action out wide, with some inside his own half too. Encouragingly, however, there is a strong amount of actions occurring inside the opposition 18 yard-box, and this suggests he is effective at breaking into this position from out wide. We should also note the amount of action directly in front of goal inside the penalty area as well. 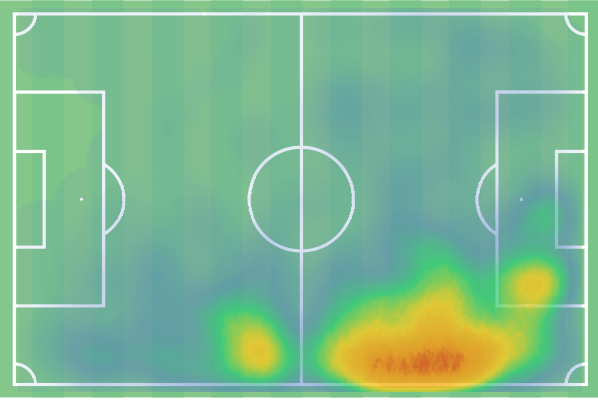 Whilst Pino will regularly stretch the pitch and provide width in attack, he does vary his positioning and perhaps some of his best work comes when shifting into more areas of the pitch.

Below, starting from a higher position further inside, Pino drops to receive possession before laying the ball off out wide. Subsequently, he then loops his run back in behind the opposition full-back, creating a 2v1 as a result. 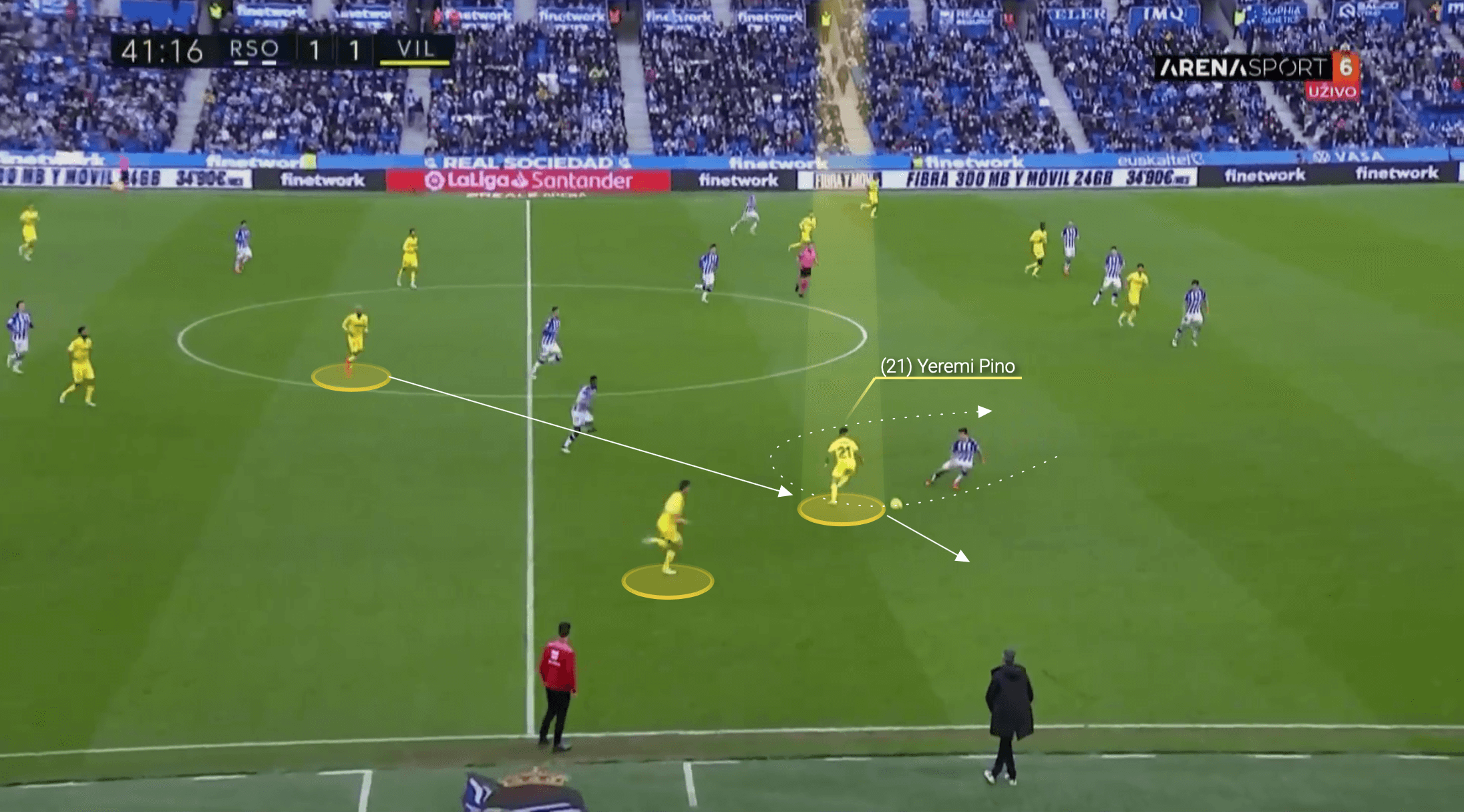 We can see him in a similarly narrow position in the following image. Here he looks likely to receive in a flat body position, although he does scan before getting in possession. 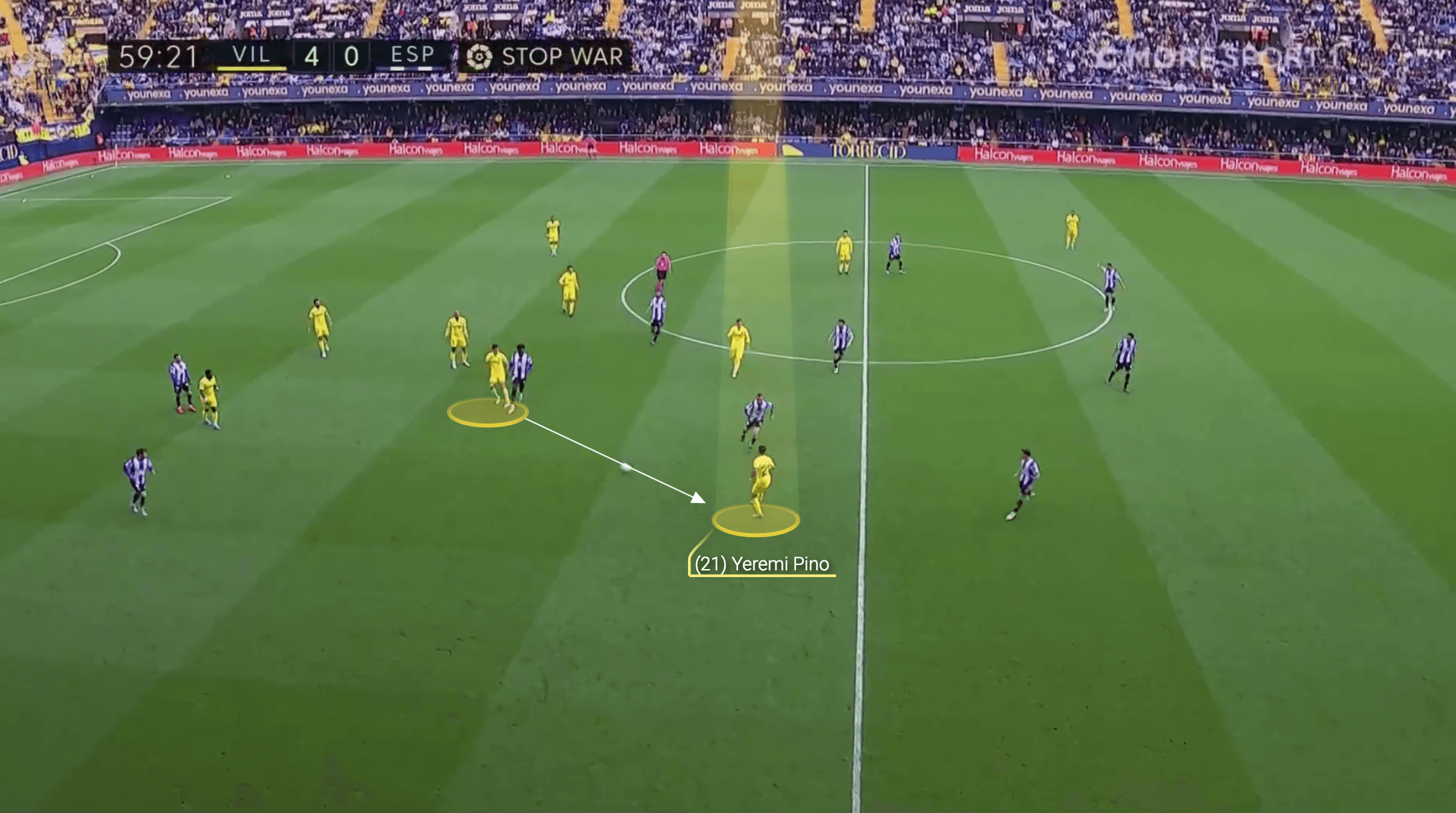 However, he very quickly opens his body up, allowing the ball to roll across him, and subsequently turns and faces the opponent. Pino has the ability to turn incredibly quickly, and if not marked tightly in these moments, can cause teams issues with space to drive into. 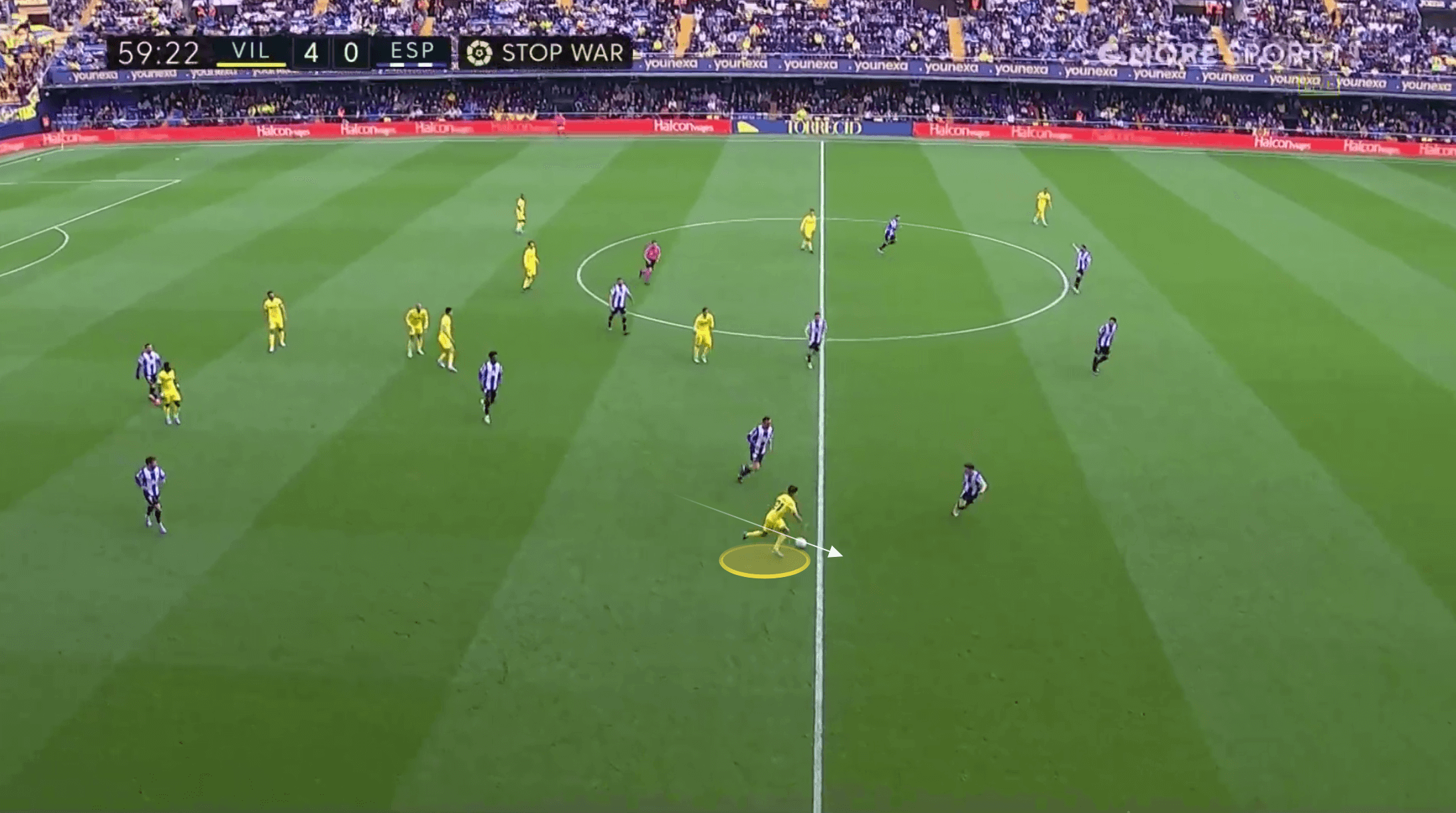 In this example, he gets shown out wide, however. And yet, whilst Pino is often a highly direct dribbler, he possesses intelligence on the ball and understands when to delay the ball or even win a foul. Here he sees he has few options close to him, and so makes a sharp turn once more, engaging the contact of the nearest defender, and winning the foul. 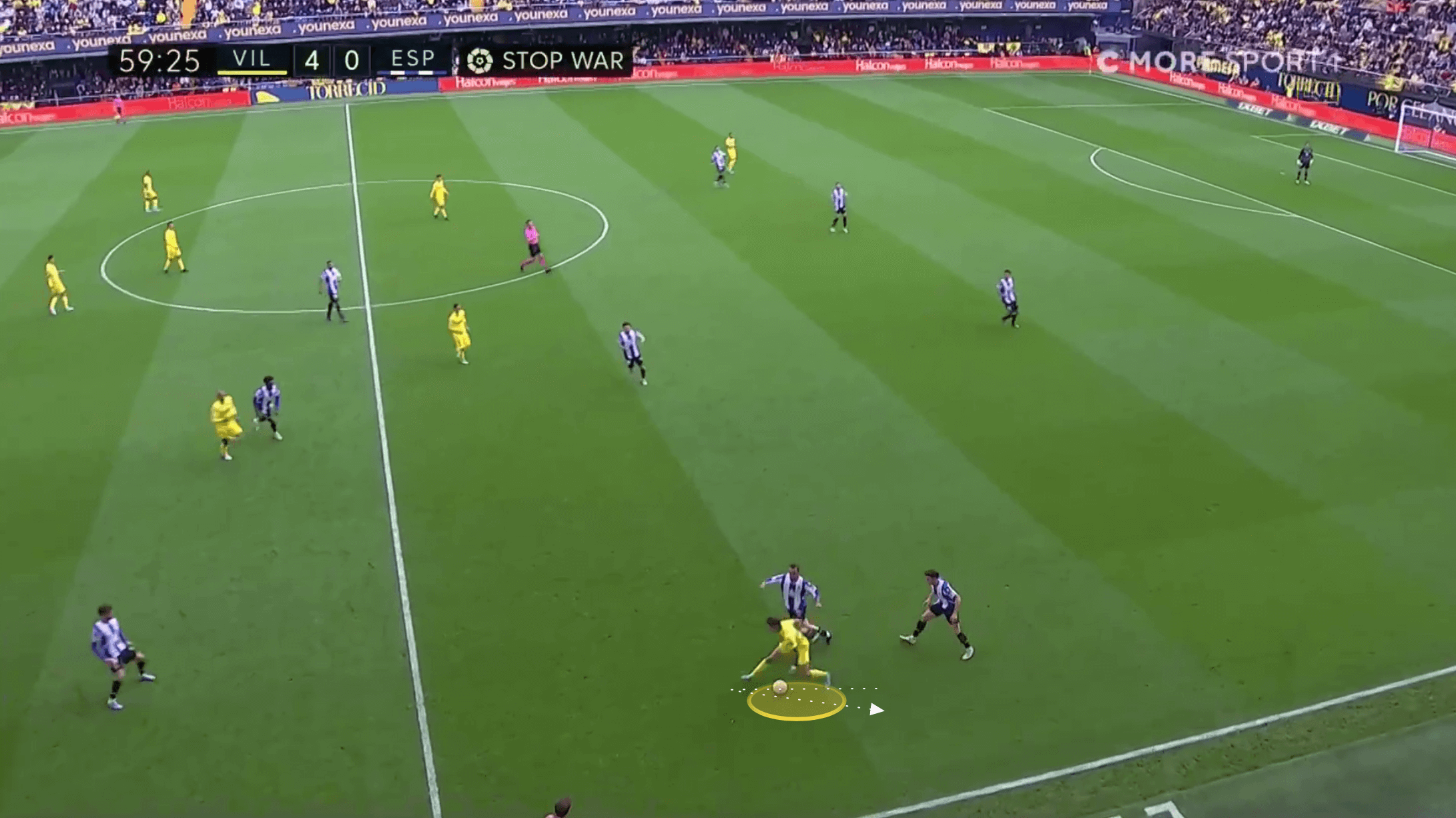 From these narrow positions, Pino will make runs off of the shoulder of his centre-forward, and if Villareal can play forward quickly and orchestrate a counter-attack, Pino has the timing on these runs, but more importantly the speed to get away from a marker and access space behind the defence quickly. Liverpool will have to be wary of this in their two-legged Champions League semi-final. 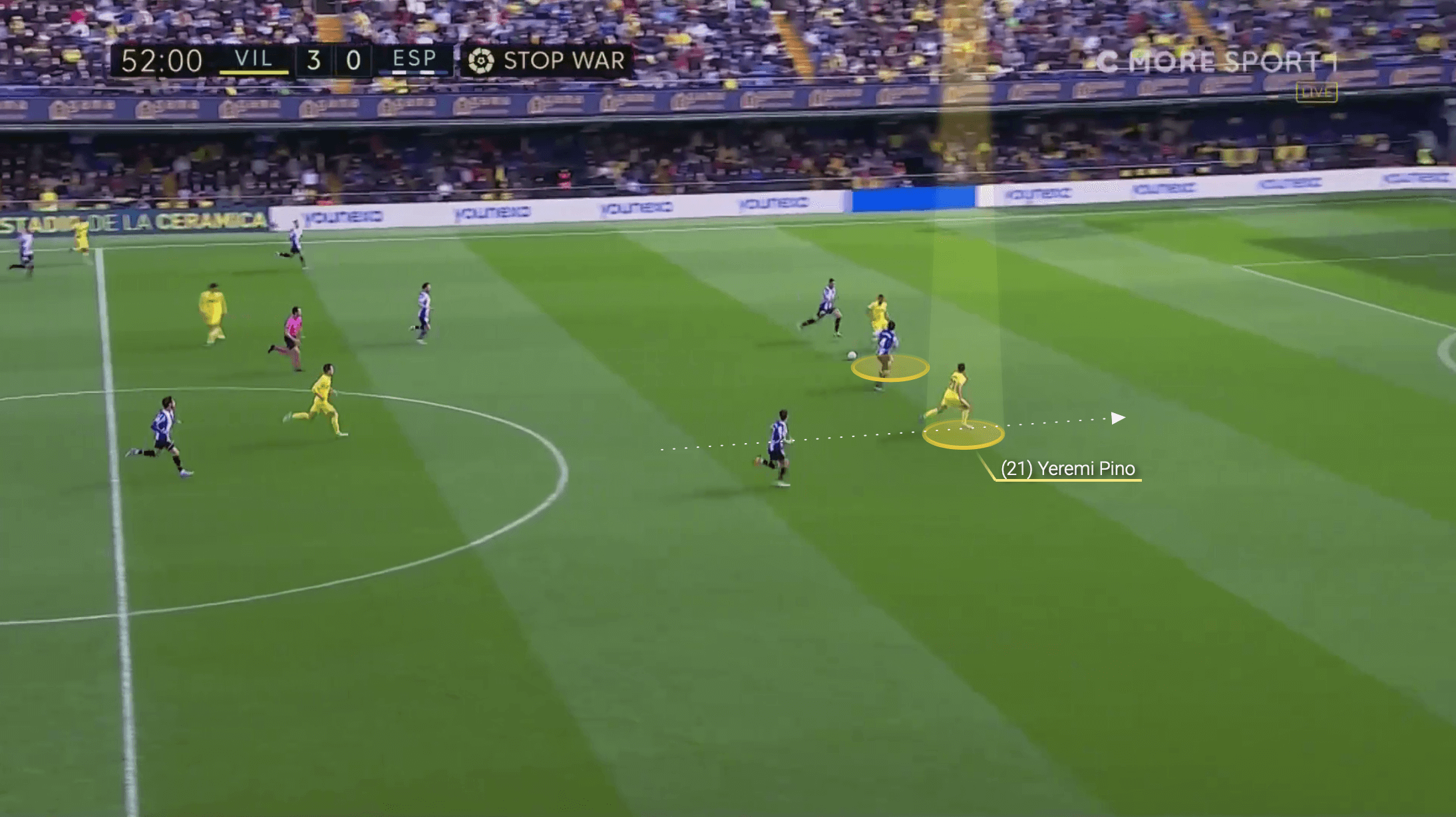 Pino doesn’t neglect defensive duties, and whilst he isn’t an overly active defender, he will still drop back and protect his full-back and can even time a challenge too. If he is able to make a tackle, like the one below where he tracks back and makes a recovery challenge from behind the attacker, he can quickly advance possession once more in attacking transition, immediately turning these kinds of moments into attacking opportunities for Villarreal. 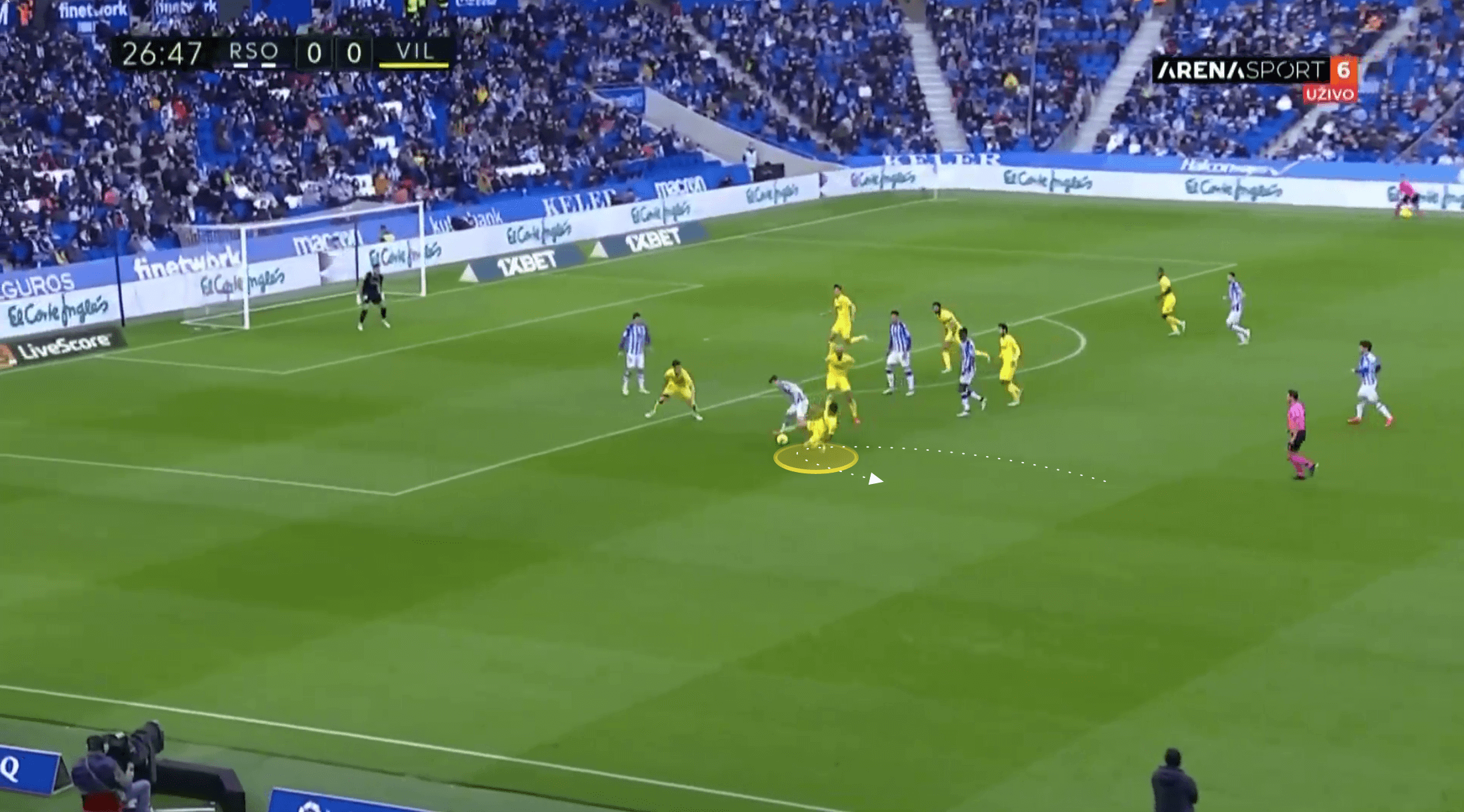 This season, Pino has averaged 4.58 dribbles per 90 with a 51.6% completion rate. Whilst he has the ability to turn sharply and dribble effectively in tighter areas, as already alluded to, he is at his best when attacking the opposition defence at pace, and with space behind them to attack. He uses disguise and innovation with his dribbling but is also devastating when using an aggressive touch to break past an opponent and a change of speed.

We can see him doing this in the image below against Real Sociedad. 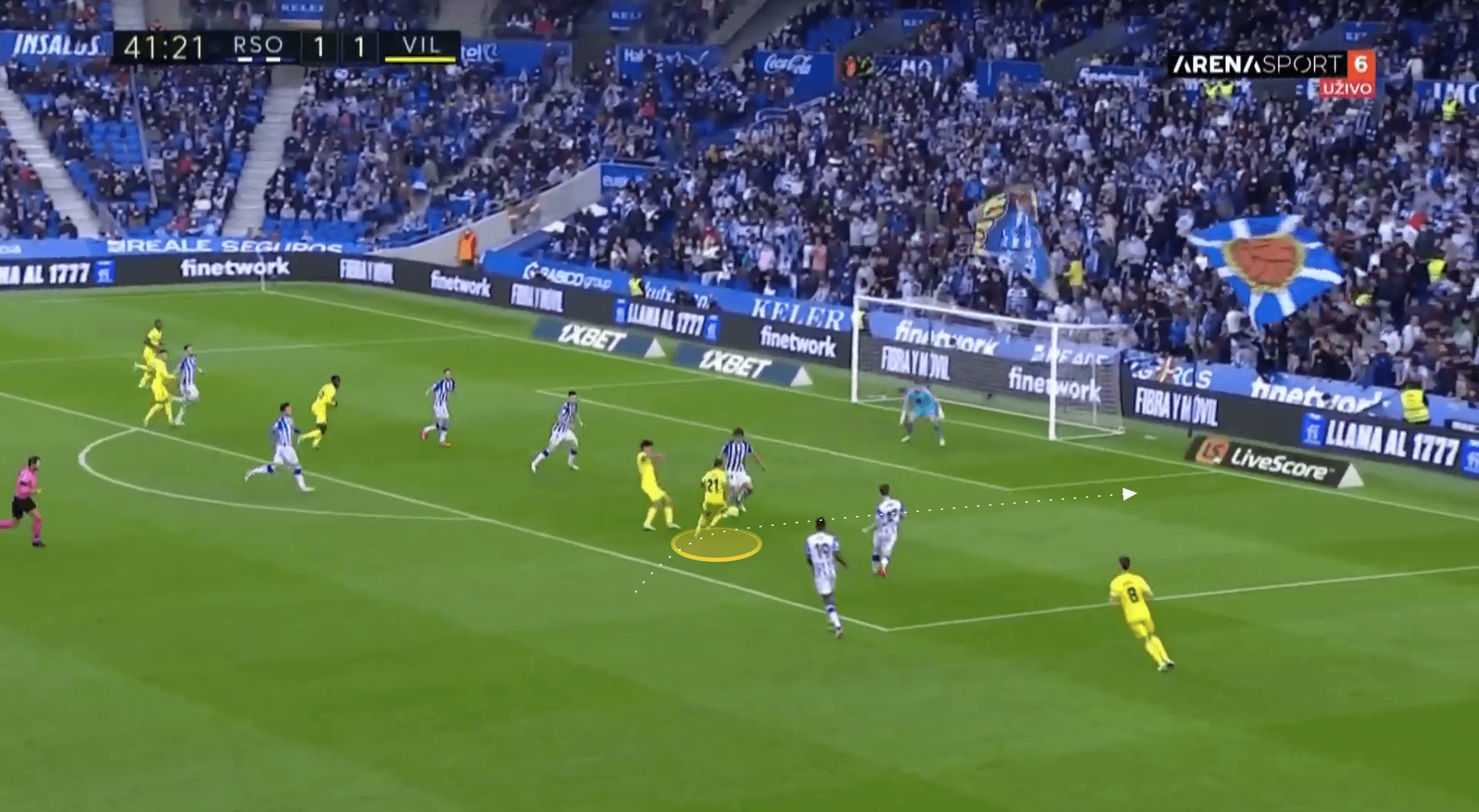 He then has the composure to take his time and find a teammate with the pulled back cross. Pino has averaged 1.59 crosses per 90 with an impressive 37.2% completion. 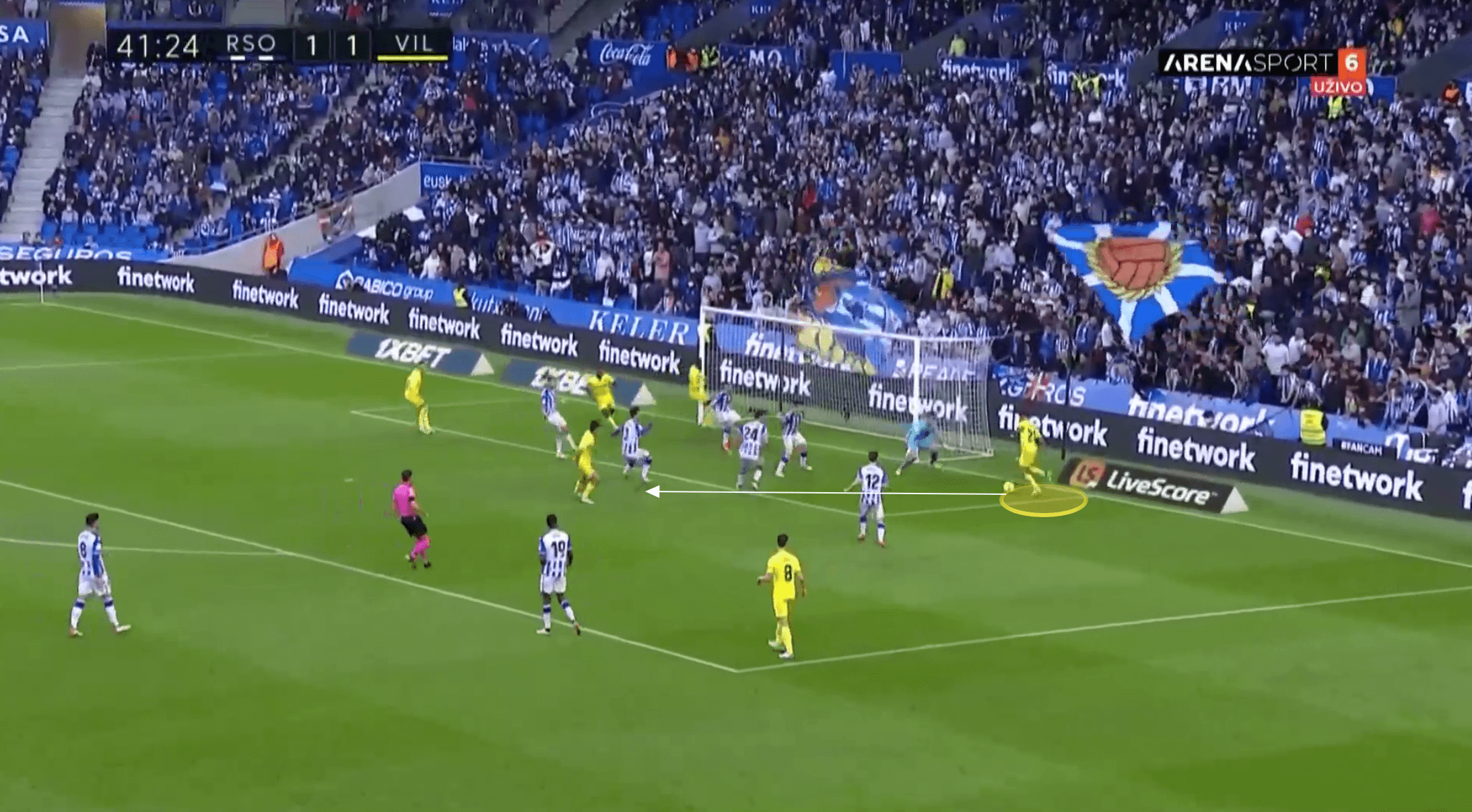 He can be creative with his dribbling but plays thinking about what comes next, and he will create space for himself with his dribbling, lulling the defender into areas or body positioning that allows them to get tangled up.

Below we see him initially cutting inside onto his left foot, forcing the Levante defender to turn their body position entirely. 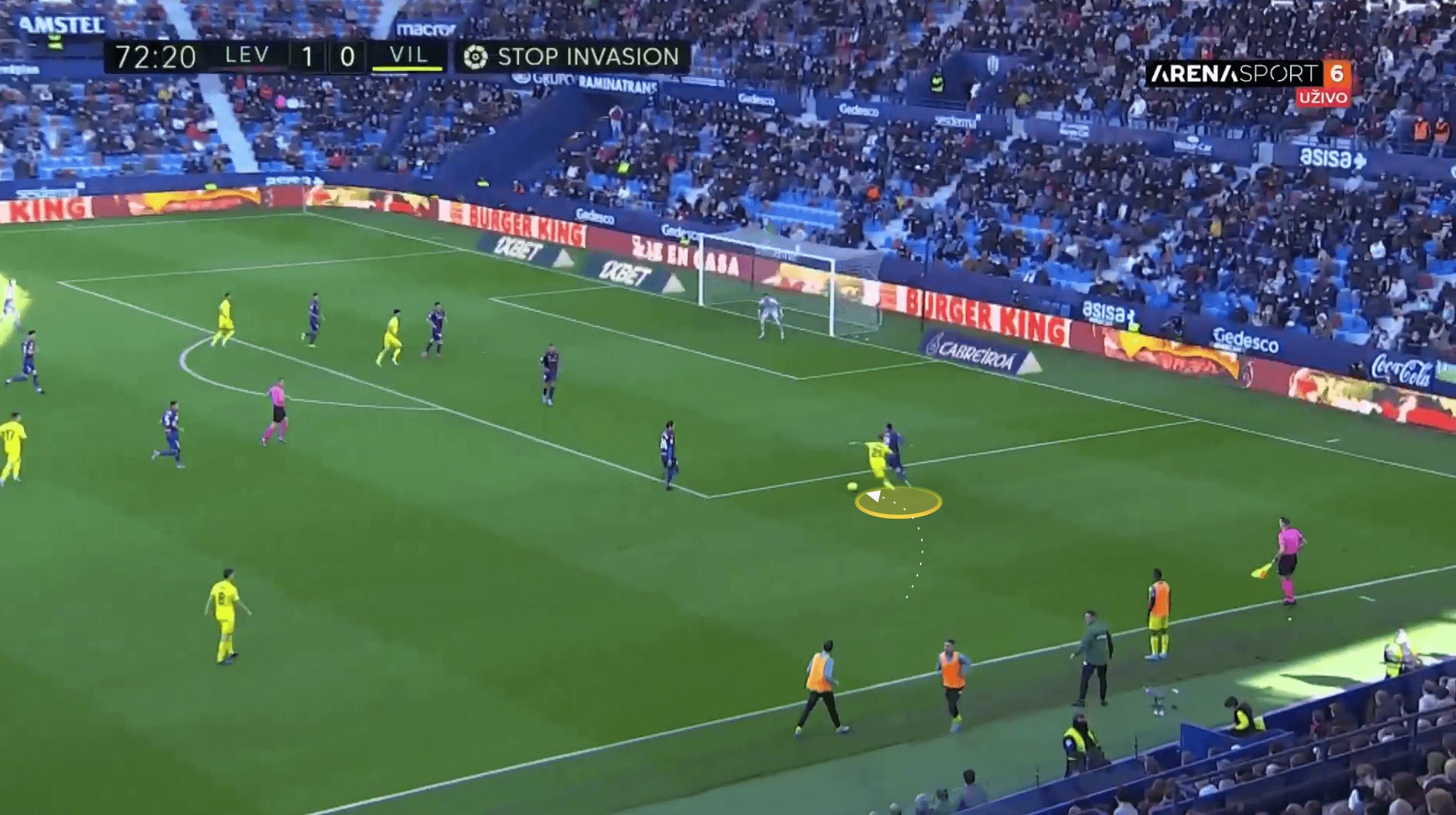 Only moments later to then cut back onto his right foot, completely bamboozling the defender and providing enough space for him to compose himself before whipping the ball across goal. 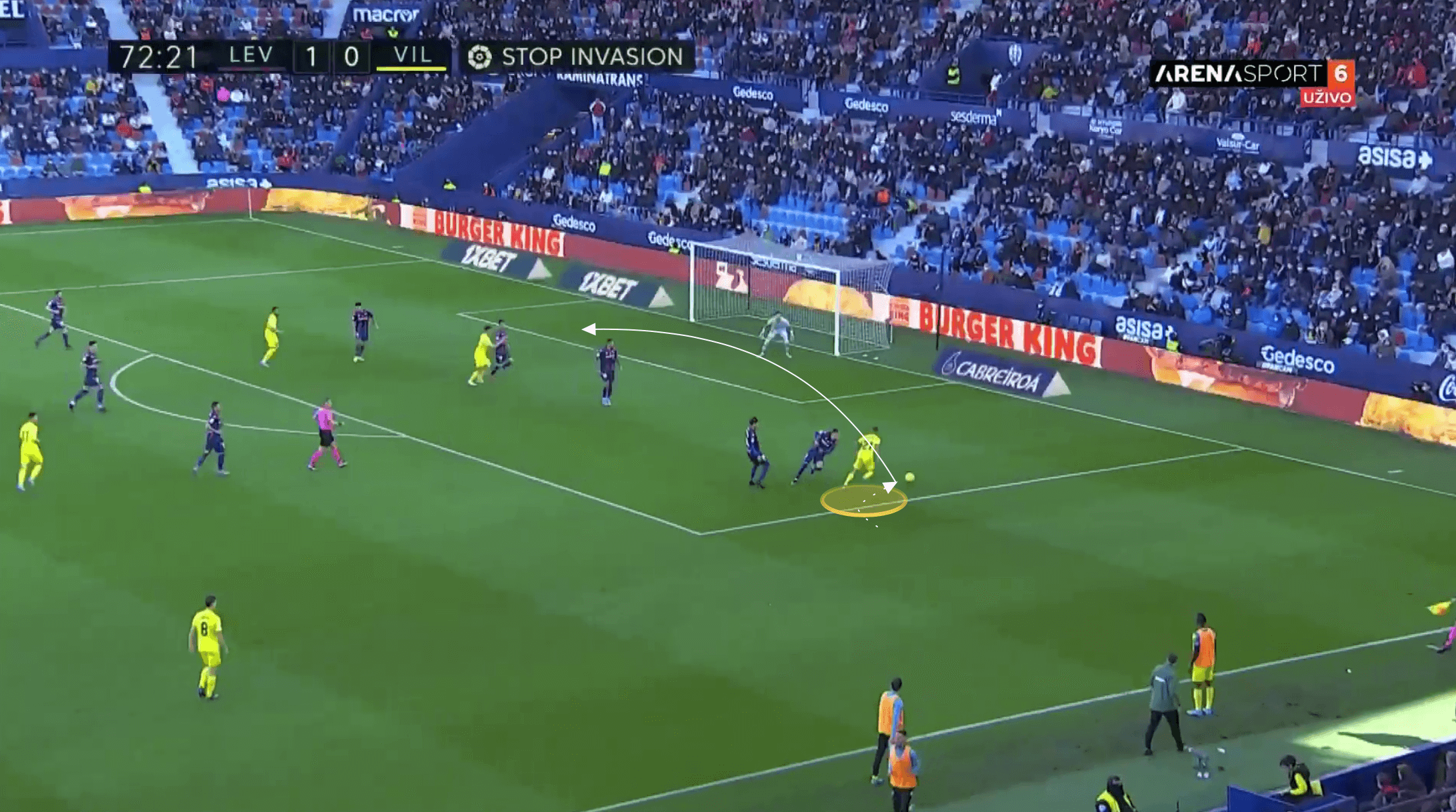 Pino isn’t merely a direct winger who can beat players with a dribble, and make runs in behind. He does these things well, but he is a poised ball player with excellent vision and his understanding of the game is clear to see.

He was involved in the build-up for Spain’s fifth goal in their recent friendly against Iceland. Seeing the movement of his centre-forward and left-back, Pino, in a deeper and more reserved position than he often finds himself in, disguised his pass and lifted the ball over the top of the defence, leading to a pass across goal and an easy finish for Pablo Sarabia. Perhaps such a pass is evidence of how his game may evolve as he matures as a player. 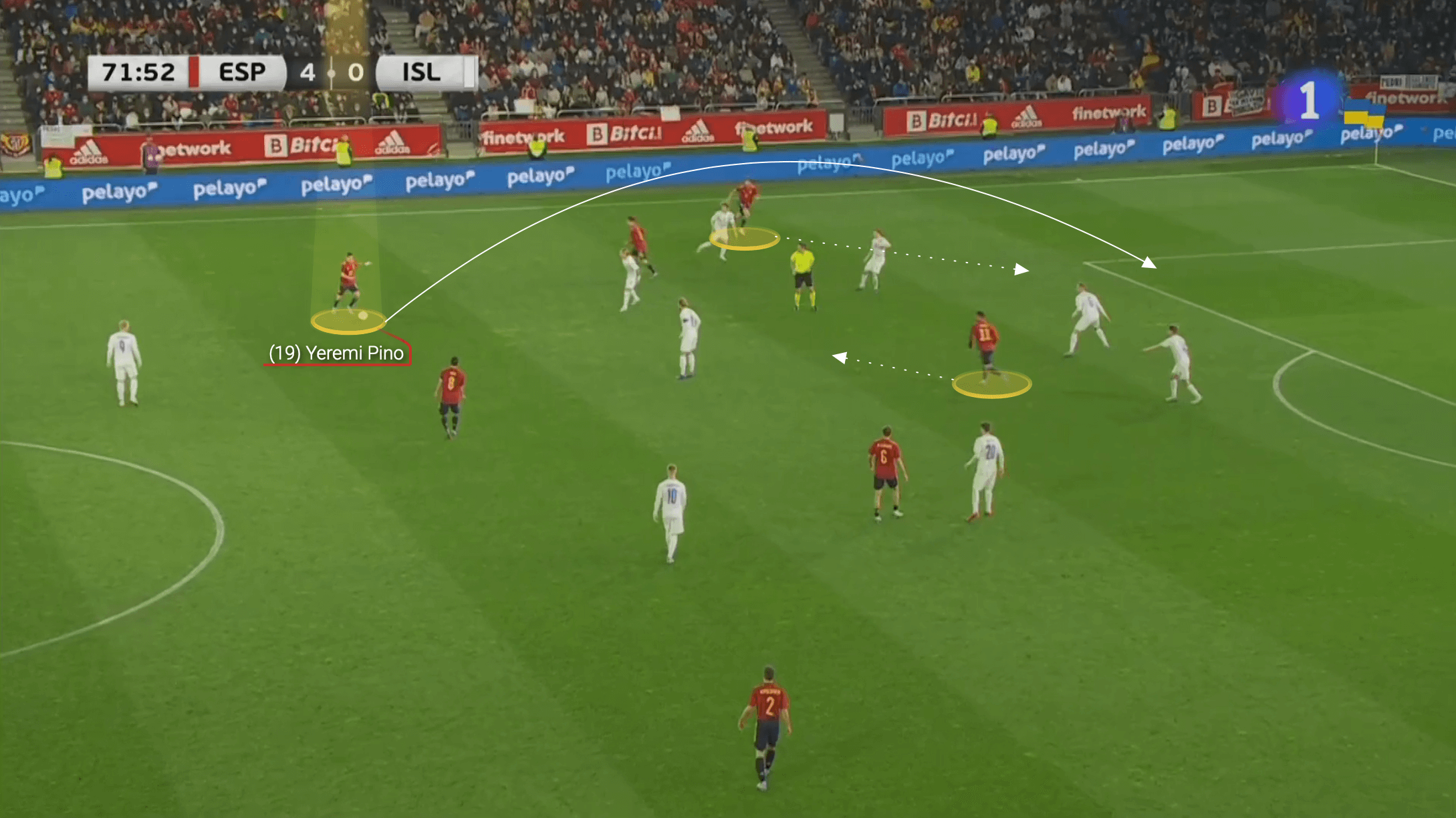 Pino may have initially been seen as a winger who might chip in with a few goals, but having then scored four in one game against Espanyol, he showed that he has the potential to heavily contribute in this area of his game.

If we look at his shot map from this season, it wouldn’t look out of place from a centre-forward poacher. Nearly all of his shots come from inside the penalty area, whilst he is clearly most productive inside the six-yard box. 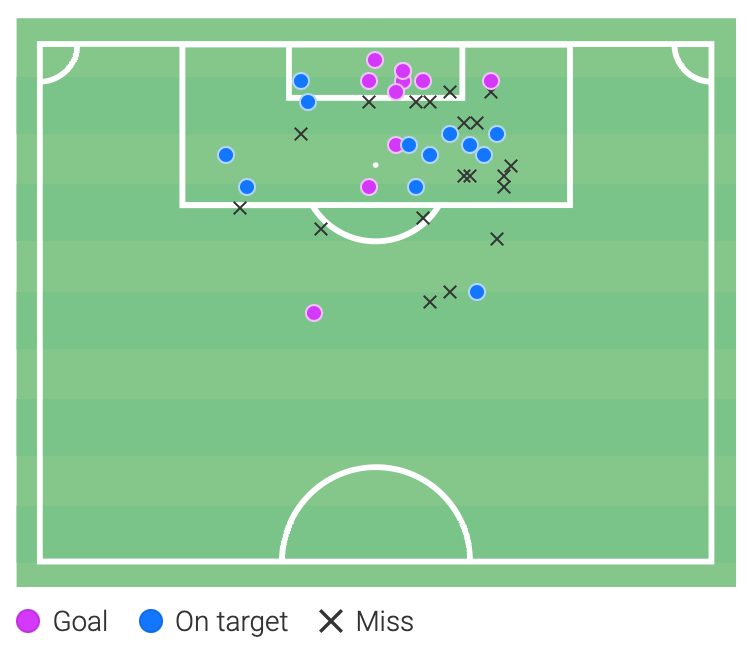 Pino does an excellent job of timing runs from out wide into this area. He is likely to get on the end of crosses and passes in these positions with the ball on the opposite flank. Pino looks to position himself in a way where the opposition left-back can’t see both the ball and Pino at the same time. He will hesitate and delay his run until seeing the opportunity to catch the defender cold.

We can see him doing this below against Young Boys, timing his run towards the back post to head home from close distance, and easily getting the other side of the Young Boys left-back. 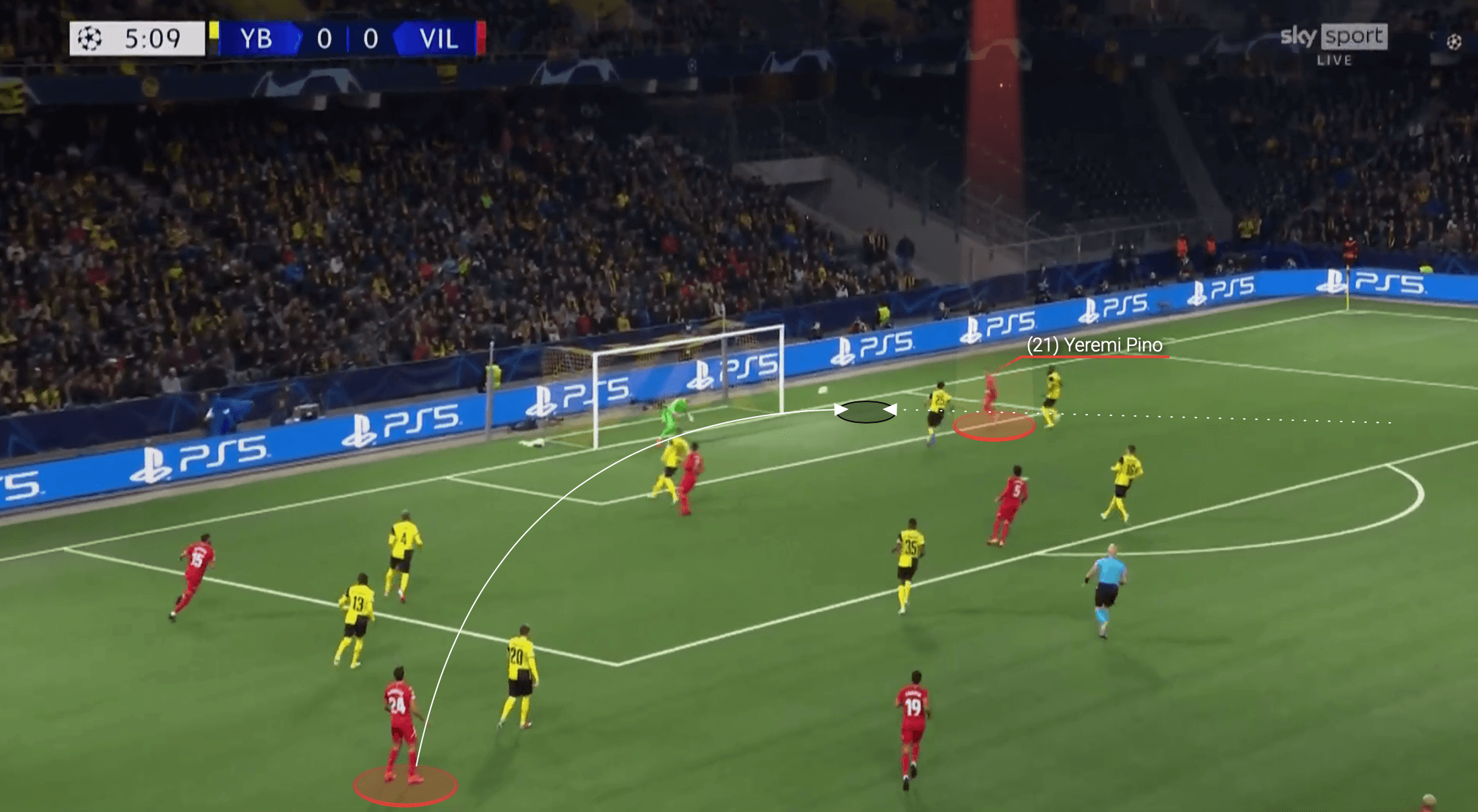 For a player who is just 5’8” or 172cm in height he is surprisingly good with his head. He has an excellent spring in his leap, and defenders need to be aware of his ability to time a jump and get above them, just as he did for his first goal against Espanyol, completely catching their defence off guard. Again, here he made a late run to get inside the back post and latch onto the cross. 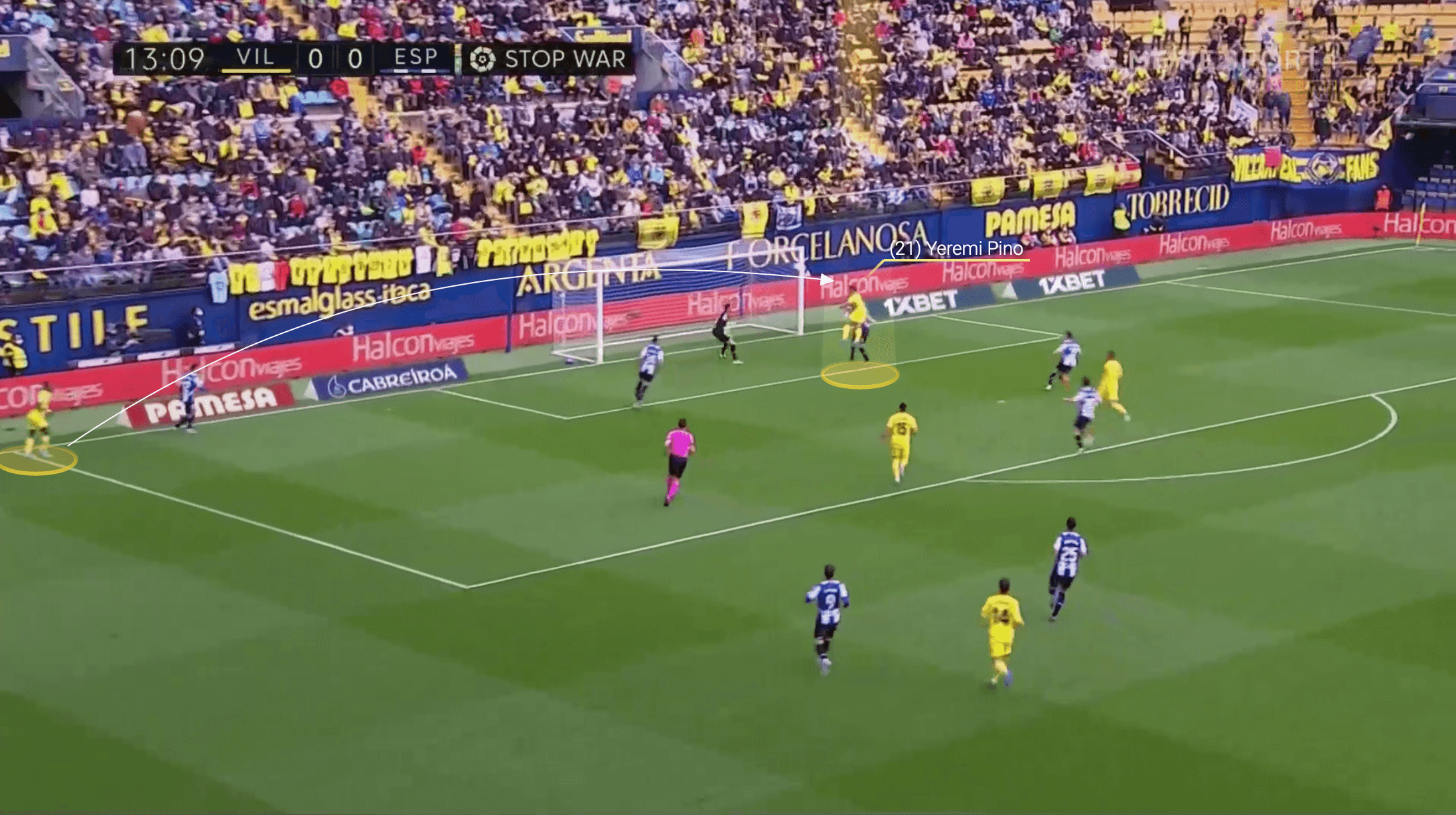 With the ball on the opposite side, we can see the kind of positions he likes to take. As already mentioned we can see how the opposition left-back can’t see both Pino and the ball in the same glance. He may make an energetic run into the central area from such a position. But equally he will also allow the play to develop if there isn’t a clear opportunity to find space. 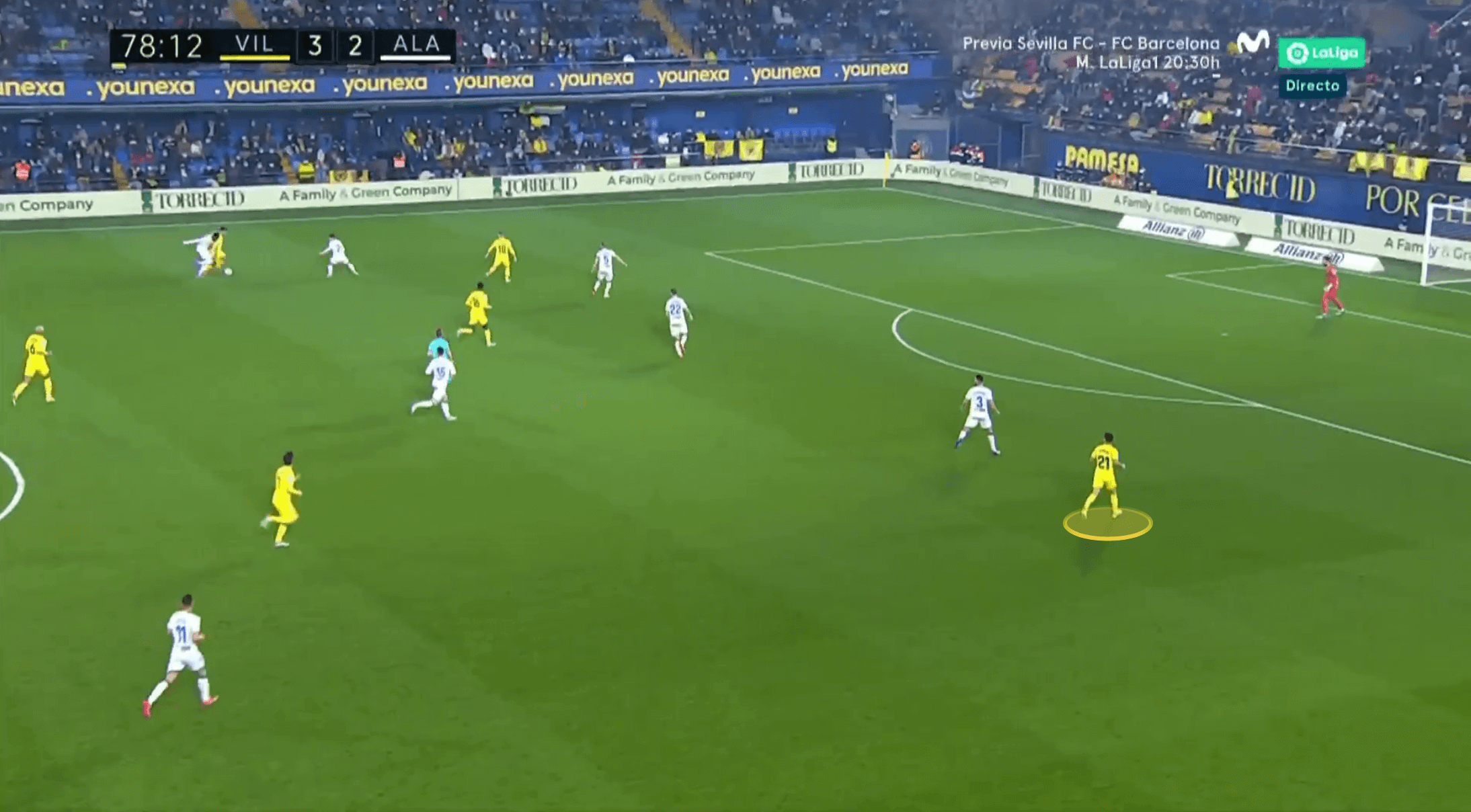 In this example he drifts further inside with the left-back marking him tighter, before choosing the perfect moment to simply peel off of his marker and access the space at the back post, before receiving the ball across goal and scoring from close range. 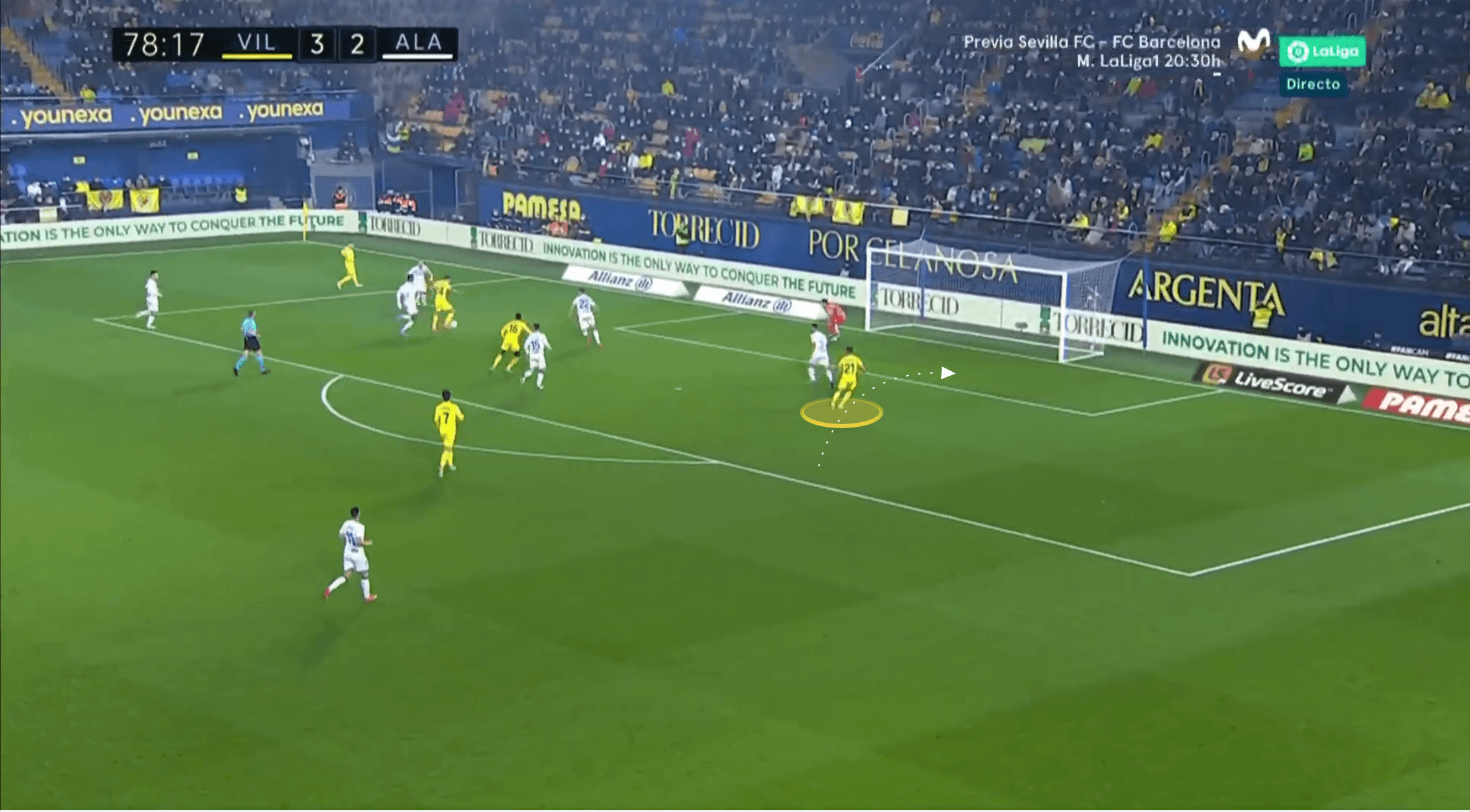 Pino will time runs in behind and has shown confidence and composure in 1 on 1 situations with the goalkeeper thus far this season. This isn’t a common situation for him, but again as he grows as a player he has shown he has the ability to perform well here. This goal shown below, his fourth on the day, shows him deftly lifting the ball over the goalkeeper’s outstretched leg before rounding him and finishing into an open net. 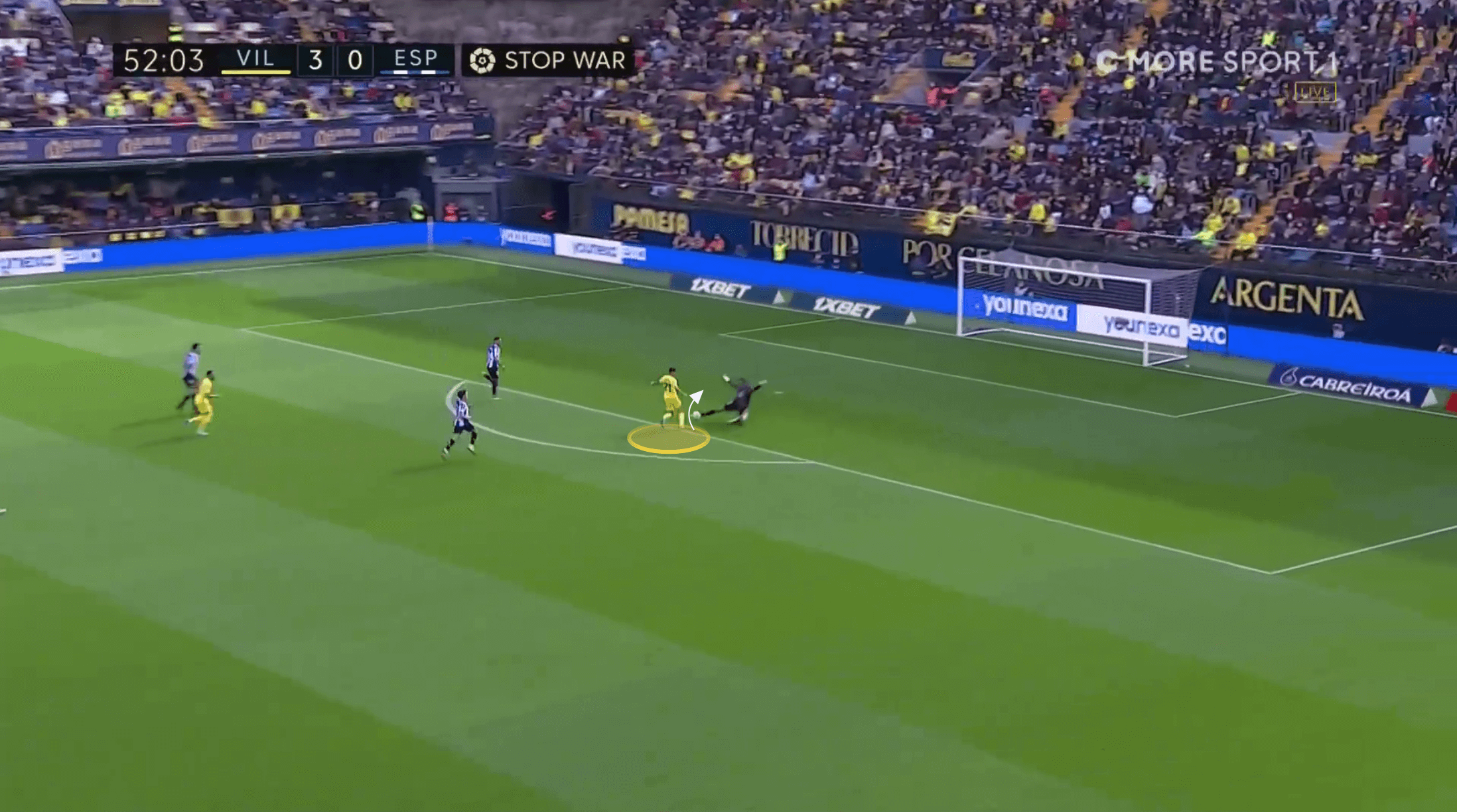 Pino is already a highly talented player, and given his age he has a high ceiling as a player. His overall style of play does share similarities with Raheem Sterling, and given the English winger’s uncertain future at the Etihad, it isn’t surprising at all to see that Manchester City have been heavily linked with a summer move for Pino. That remains to be seen, however, Pino’s stock is only going to continue to grow should he put in fine performances against Liverpool this coming week and next. Pino may well be about to break into the mainstream.