Angel City were able to beat the 2022 NWSL Challenge Cup finalist, Washington Spirit, in a match that ended 0-1 for the team that is playing their first-ever NWSL season. In fact, Angel City started their debut season strongly with two wins against both NWSL Challenge Cup finalists, North Carolina Courage and Washington Spirit, while losing to Orlando Pride at home. It is certainly a promising start for Angel City but this shouldn’t be sufficient for them as the team needs to remain consistent in terms of performances throughout the season in order to gain the fruit of their work.

The team is now holding the 2nd spot in the standings with six points out of a possible nine, which is a very good result so far. On the other side, after a long and a bit tiring NWSL Challenge Cup journey, Washington Spirit started the NWSL season with a loss against Angel City and they are yet to play their next fixtures as they finished late from the NWSL Challenge Cup compared to the other teams due to play the final. Washington Spirit are now in a delicate situation and they should know how to get out of it quickly in order to not let the players’ confidence in their abilities decrease, which would affect the team’s upcoming performances and results.

In reality, Washington Spirit played well during the final and were not an easy team to beat. Therefore, the players shouldn’t let the disappointment of these two consecutive losses affect their determination to win. This psychological aspect is very important especially in such situations and it is the work of the coaching staff to keep the players’ morale high and ensure that the players remain 100% motivated as the season has just begun.

In this tactical analysis article, we will be focusing on the key aspects that led to Angel City’s win by exploring the team’s overall performance and tactics while at the same time analysing Washington Spirit’s mistakes and the reasons that led to their loss at the Audi Field.

Washington Spirit started this game relying on the 4-2-3-1 formation with Aubrey Bledsoe as a goalkeeper, Morgan Elizabeth Goff, Emily Sonnett, Sam Staab and Camryn Biegalski in defence, Taylor Aylmer and Julia Roddar as central midfielders, Trinity Rodman and Anna Heilferty on the wings and Dorian Bailey as an advanced playmaker in support of the striker, Ashley Hatch.

On the other side, Angel City opted for the 4-3-3 formation including Bosnia’s goalkeeper Dijana Haračić, Jasmyne Spencer, Megan Reid, Vanessa Gilles and Tyler Lussi in defence. The midfield was made up of Dani Weatherholt, former Racing Louisville player Savannah McCaskill and Cari Roccaro while both Japan international Jun Endo and former Manchester United Women forward Christen Press played on both wings in support of the striker, Simone Charley. 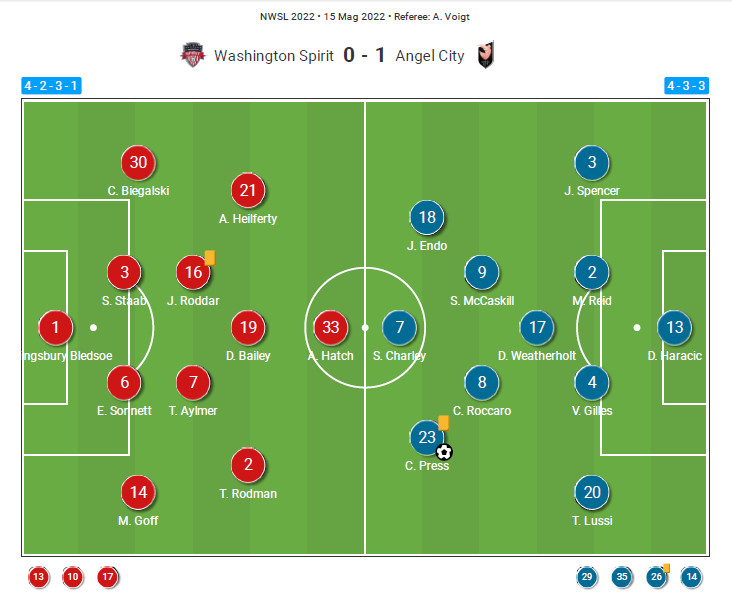 The match started in a balanced way with occasions being made from both teams, especially during the first half. Angel City exploited Washington Spirit’s recurrent defensive issues, especially in the build-up and when being subject to counterattacks in the best possible way. In fact, Angel City used a lot of players to press high on Washington Spirit’s defenders when they are in the build-up phase. This obliged Washington Spirit to commit passing mistakes in their own half as the players were often surrounded by Angel City players and went for the bad passing decisions. In fact, Angel City made 53 interceptions and 27 clearances in this match and won 70,51% of the defensive duels. These numbers indicate that Angel City were not only solid when defending in their own half but also in Washington Spirit’s half. It is true that Angel City did not exploit all of their interceptions/clearances in an efficient way in attack, yet, they were able to score the one goal that gave them the advantage over their opponent.

In the following picture, you can notice how many Angel City players were advancing to block all possible passing lanes and oblige Washington Spirit players to either go for long passes, pass to a marked teammate or fall into the trap of overthinking and indecision which would eventually lead to making a wrong or an inaccurate pass, which is exactly what happened here. 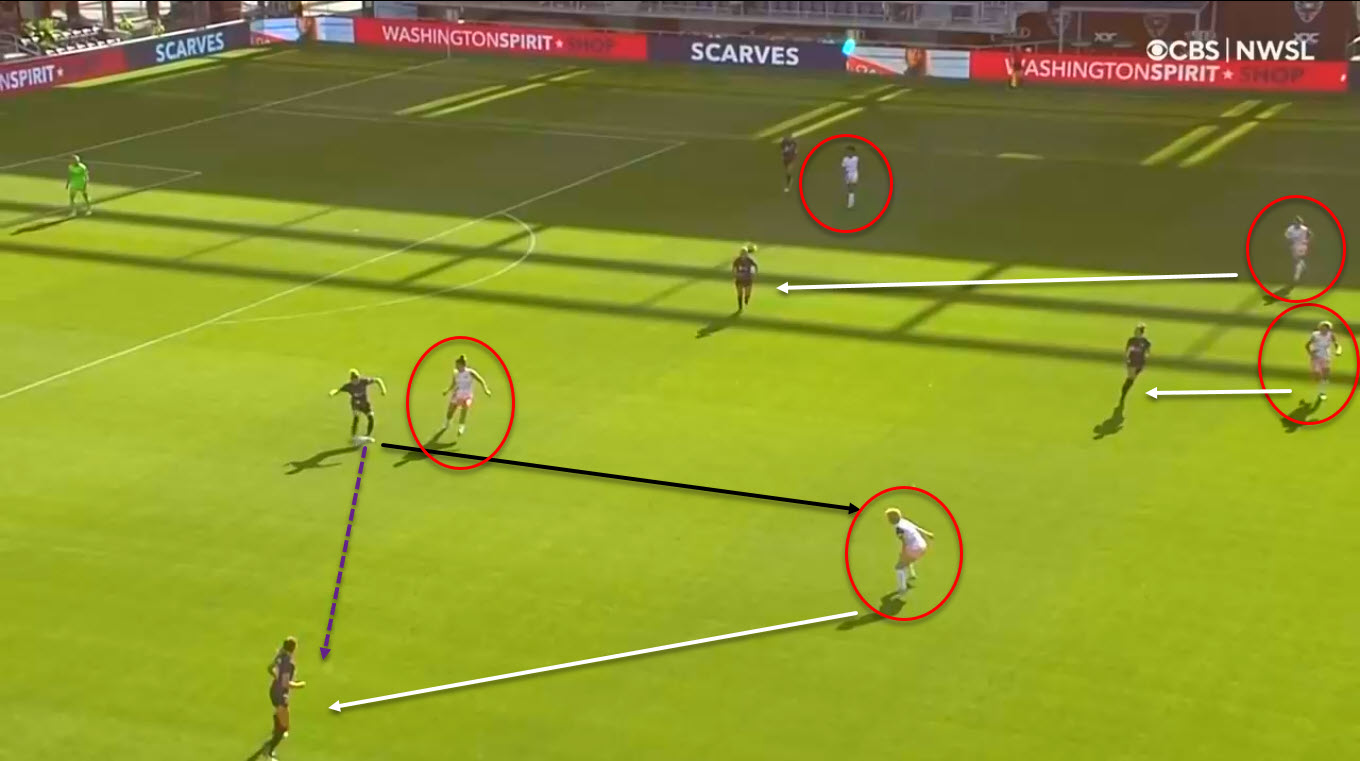 Endo, who was at the receiving end of the wrong pass, advanced with the ball until she reached the box and decided to shoot with power, however, her shot lacked precision and went away of goal. The team remained patient and tried to have possession as much as possible in order to avoid Washington Spirit’s attacks and aim at reaching the box more often, but they were not really able to attack so often during the first half. Yet, Press was still able to score the sole goal of the match thanks to a magnificent individual effort that she started from the left wing until she reached the box. 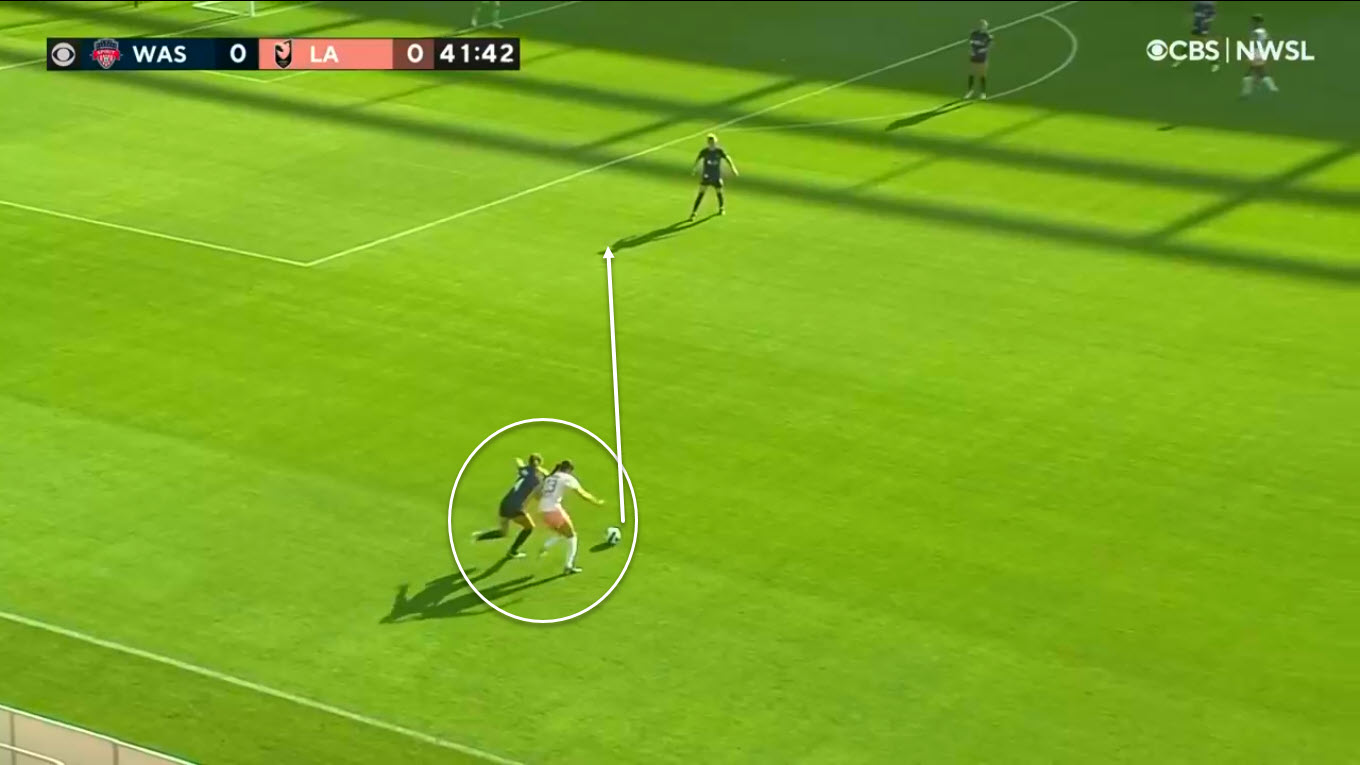 As you can see above, Press received an accurate cross from the back, made an excellent control and added two touches to the ball in order to get away from her marker while going internally. What made Press win in this duel is the fact that she was quick enough to touch the ball before her opponent and then put her body against her in order to cover the ball and prevent Goff from having an advantage on the ball, and that was the most decisive part of this duel. After leaving Goff behind, Press continued her way towards the goal, fixed her direct opponent Sonnett and decided to go for a curved shot because that was the best shooting option in this situation, knowing that Washington Spirit’s defender was in front of Press, which would make any other type of shots less likely to get past Sonnett. Press’ experience in playing against the FAWSL top teams like Chelsea, Arsenal and Manchester City helped her improve her decision-making and finishing skills further and in this goal, she proved once again that she can be crucial in attack if she is concentrated. 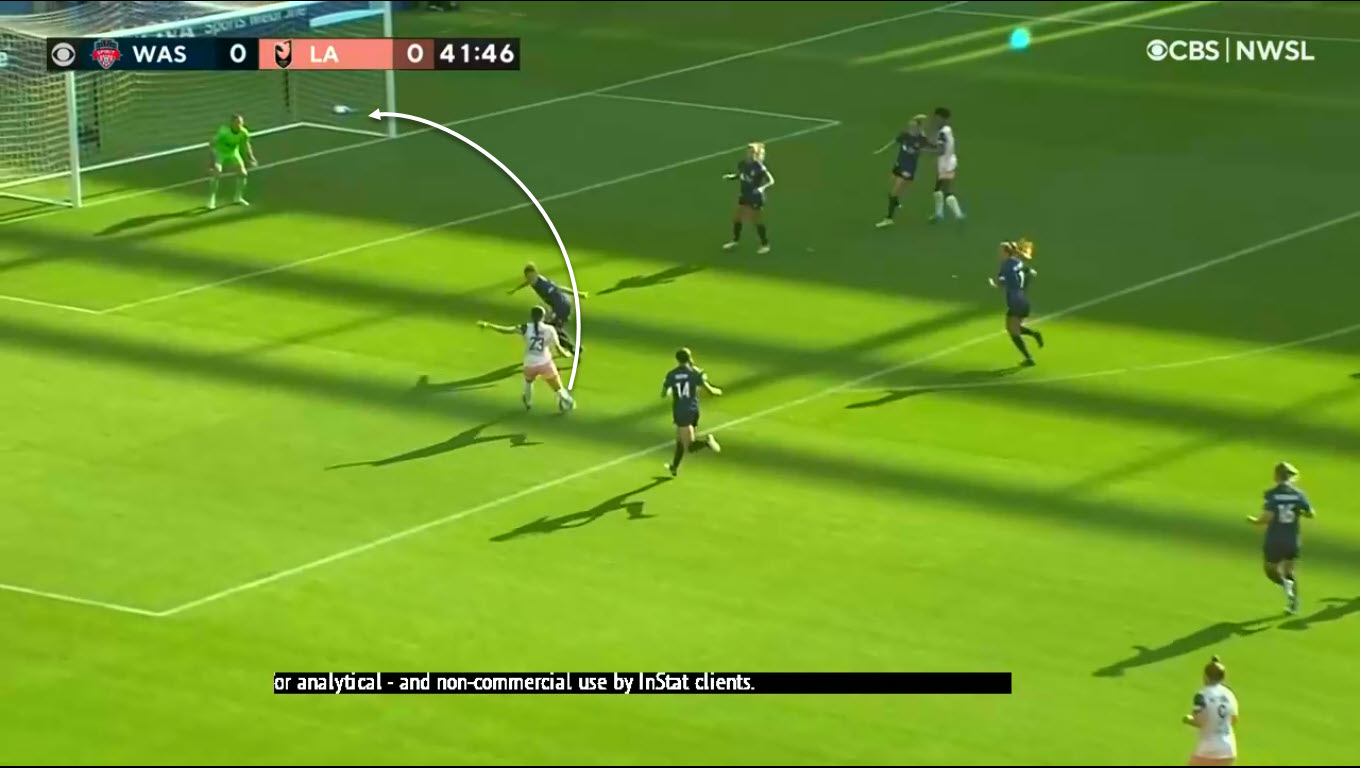 Following their goal, Angel City tried to remain compact at the back and aim at shooting from distance and attempt to beat the goalkeeper. The team made 10 shooting attempts with just three being on target, which means that the team reaches the final third quite often but fails to finish the action well, except in the goal action. Therefore, the team needs to work further on breaking down defences and creating space inside the box in order to ensure that the holder of the ball gets the necessary space and time to shoot on target instead of being obliged to shoot just for the sake of it and in order to prevent a possible counterattack. Nevertheless, what counts for Angel City in this match is their attacking realism since they were able to score their winning goal despite shooting only three times on target.

The introduction of Le Bihan in midfield was also quite remarkable for Angel City in the second half as the French player helped keep things complicated for Washington Spirit in the battle of midfield, bringing her experience to the game and adding a lot of precision in terms of passes for Angel City. In the last minutes of the match, she had a golden opportunity to help secure the win with a second goal but the action wasn’t successful. In fact, Le Bihan did not commit a mistake, she launched a counterattack and advanced with the ball until she reached the edge of the box and saw Endo being marked and noticed the advancement of Hope Breslin on the left wing. Le Bihan provided a through pass to Breslin thinking that she would cross the ball to Endo, however, Breslin’s touch was poor and it was just a “half-shot” that went outside the goal. In this case, Le Bihan can’t be blamed for her passing decision. Yet, she could have been more creative by acting like she was intending to pass to Breslin in order to attract the defenders’ attention towards the left while giving a pass or a little chip to Endo since she was well-positioned to shoot. 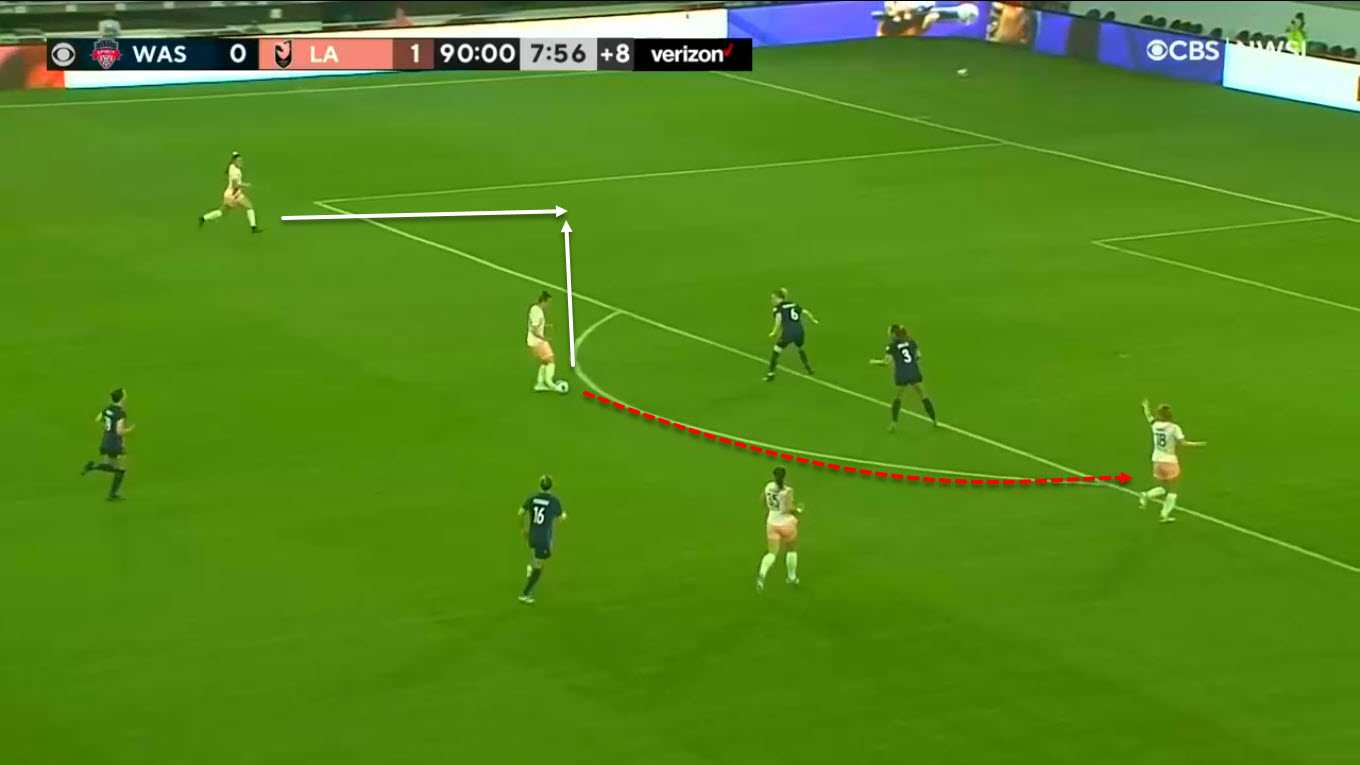 Washington Spirit did not start the game badly at all. The team attacked quite often and reached the final third without problems throughout the match. Nevertheless, the team’s problems are mainly related to finishing. Washington Spirit were able to shoot eight times but they succeeded in shooting on target only once, which proves the attackers’ finishing issues. This can also be partly related to Angel City’s solid defending in this match, yet, playing against a solid defence shouldn’t justify not being able to shoot on target, especially when knowing that the team has some excellent attacking players such as Rodman and Hatch.

Moreover, Washington Spirit could have exploited their chances better when it comes to final passes. For instance, Heilferty went for the shot for a few times when being in a position that does not allow her to shoot comfortably. More importantly, she had the possibility to provide an assist to Rodman who was just in front of goal when Heilferty was about to shoot in the following example. Such decisions can affect the result of the match when the level is too close and when dangerous chances are not made easily. 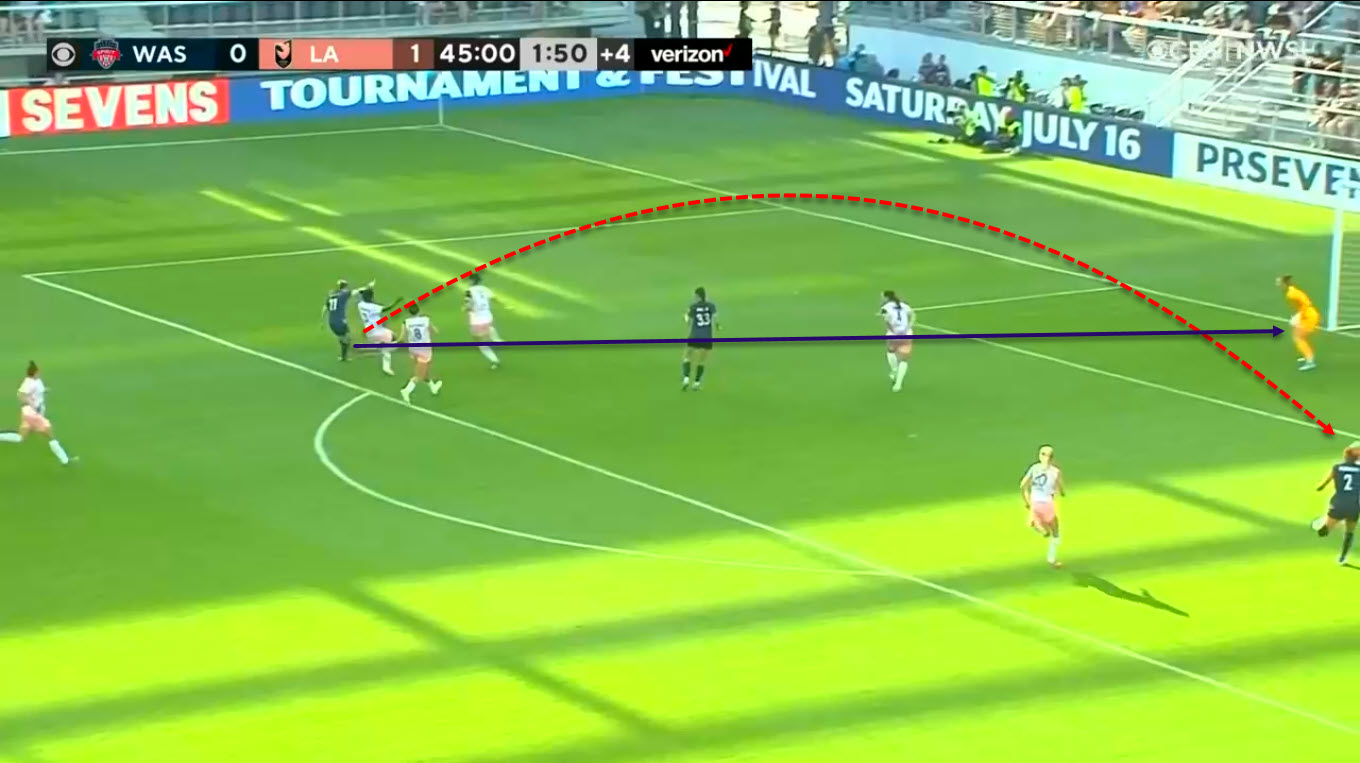 At the same time, Rodman herself missed a dangerous opportunity at the 57th minute when she got a through pass from Bailey, fixed her opponents but shot the ball away from goal, knowing that Hatch was running towards the box in order to provide a passing option for her teammate. A few minutes later, Hatch had a goalscoring opportunity after receiving a through pass from Ashley Sanchez, but Hatch didn’t react quickly to that pass as she failed to have the lucidity needed to shoot the ball before it slips away, which obliged her to pass towards the middle of the box since her position was too angled for a shot. And unfortunately for the team, Haračić was there to intercept the pass. 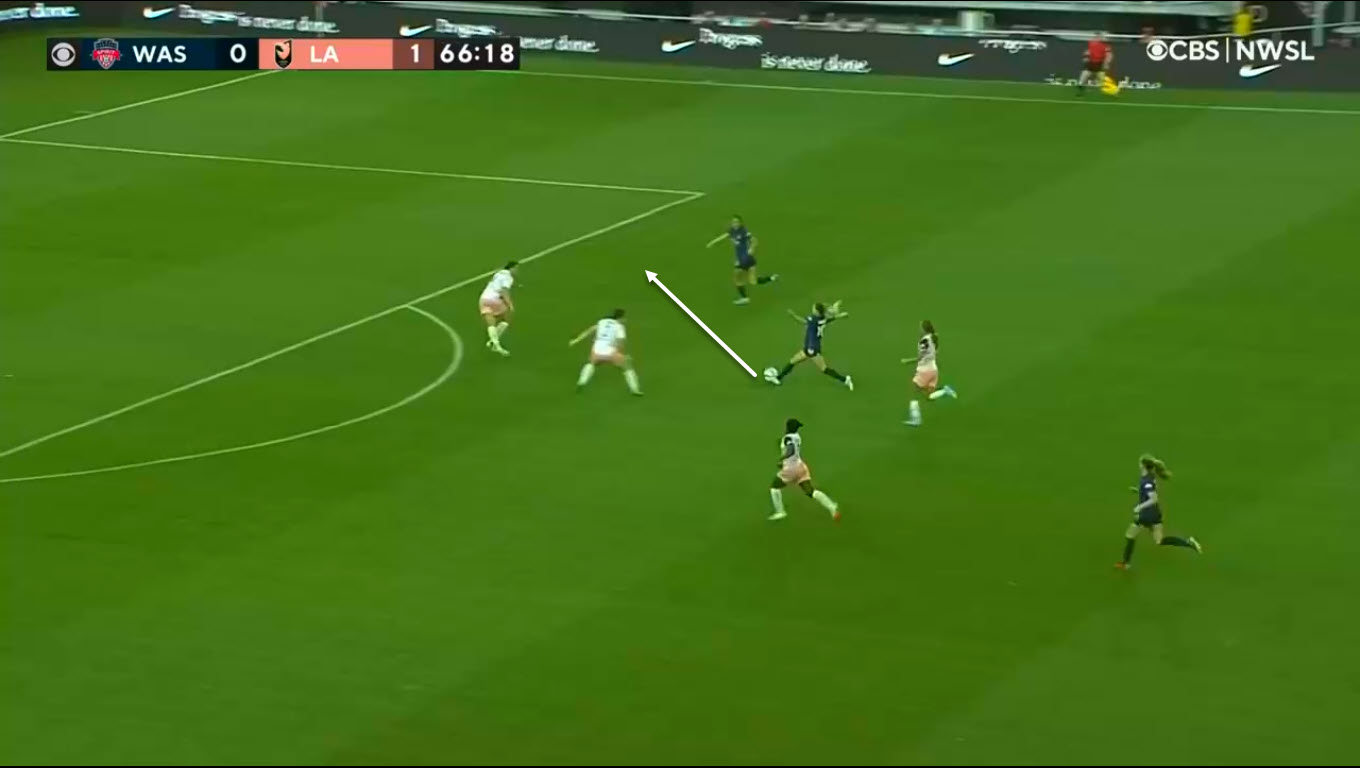 Washington Spirit paid the price for being undecisive in defensive duels and in leaving a lot of space for a talented finisher like Press. Moreover, they lost three points at home while failing to score goals which is very worrying from an attacking perspective. The team should revise what went wrong in this match both from an attacking and a defensive perspective as they will need to address these issues as soon as possible to not lose additional points during this period especially when playing at home.

On the other side, Angel City should build on their win and on this positive period in general by continuing to improve their performances in order to not fall in the trap of overconfidence or underestimation. If they succeed in keeping their momentum going for a longer period, the team would be able to gain some more fundamental points that will help them a lot at the end of the regular season.