Milan Women faced Zürich Women in the round one’s semi-final of the UEFA Women’s Champions League. This first stage of the tournament ended with a 1-2 Milan win following two Valentina Giacinti goals and despite a Naomi Mégroz goal at the 68th minute. This win gave Milan the chance to qualify for the second round of the tournament if they beat Hoffenheim Women in the first-round final which was played on August 20. Then, the winner will be finding teams like Lyon, Juventus, Manchester City, Wolfsburg and Rosengård in round two and the teams will have to surpass this round in order to access the group stage of the tournament. Milan however lost to Hoffenheim who passed to the round two while the Rossonere were out of the tournament a bit too early.

In this tactical analysis article, an extensive review of Milan’s performance will be presented while tackling the weaknesses and the positive aspects of the team’s tactics and especially what needs to be improved ahead of the upcoming games while also analysing Zürich’s performance.

For the Rossonere, Maurizio Ganz opted for the 3-4-3 formation using Laura Giuliani as a goalkeeper, Laura Fusetti, Laura Agard and Guðný Árnadóttir in defence, Sara Thrige and Valentina Bergamaschi on the wings, Greta Adami and Refiloe Jane as central midfielders with previous Bayern Munich and PSG player Verónica Boquete as an advanced playmaker who leans towards the left, and Lindsey Thomas on the right-wing supporting the captain Valentina Giacinti. 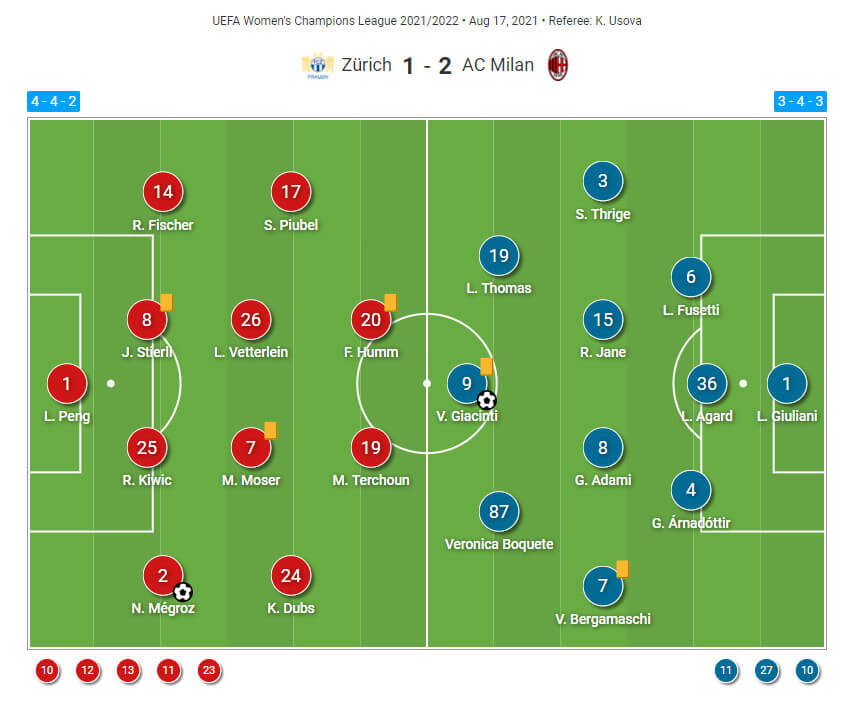 Zürich played a good game overall and were striving for a win, they didn’t play defensive football and didn’t fully retreat and wait for counters, the Swiss tried to build from the back and advance whenever they had the opportunity to do so, but due to Milan’s ability to keep possession and attack so often, Zürich were obliged to defend more than they wanted. Nevertheless, they were able to create some dangerous chances and threaten Giuliani’s goal before scoring a goal that complicated things for Milan. At the start of the match, Milan were the team that had more possession while Zürich weren’t able to advance with efficiency as they relied mainly on long passes towards the wingers and to Humm and Terchoun. What made this an unsuccessful plan was the strength of Milan’s defenders in aerial duels, which prevented Zürich from collecting the ball inside the final third. 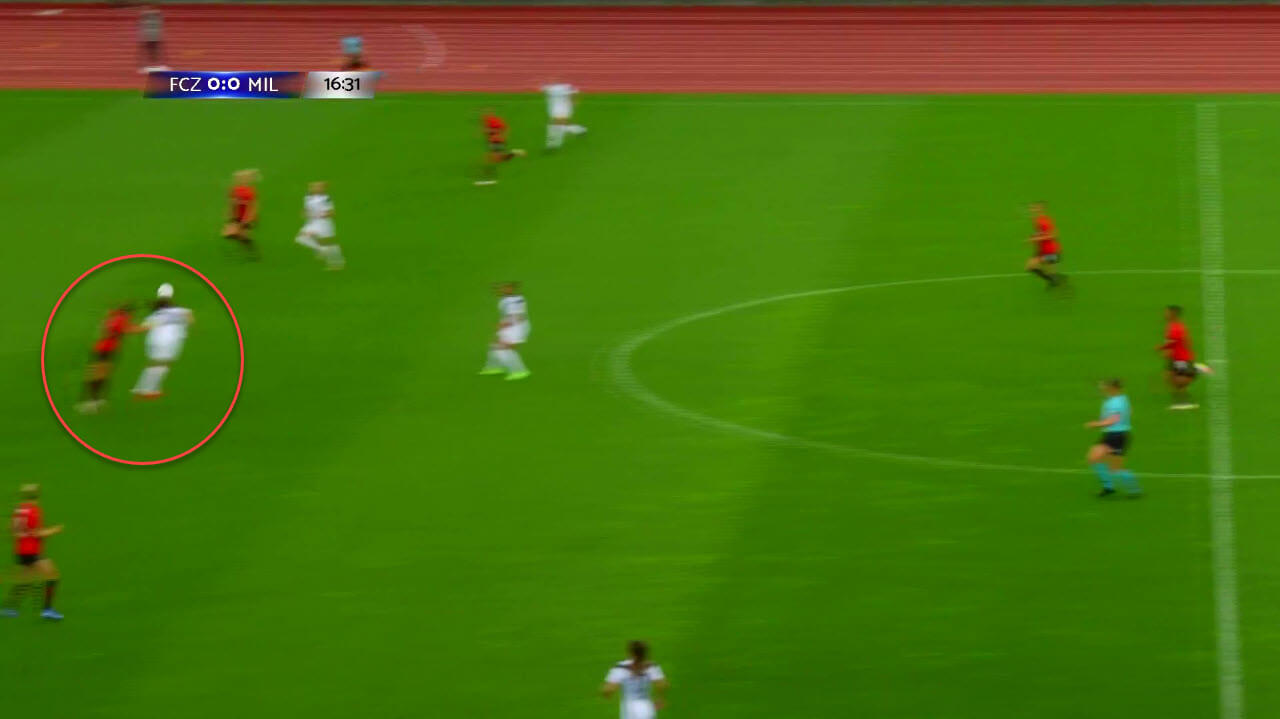 Moreover, Zürich’s attacking players lacked adequate decision-making in the several times during which they reached the box and Milan’s defensive disturbance obliged them to be even hesitant in most of the times as Milan’s numerical superiority in these cases didn’t leave room for creativity nor for correct simple passing from Zürich players. That’s why we saw them ending their actions quickly whenever they reached the box. Here for instance Terchoun was able to dribble past her opponents and reach a very dangerous zone of the pitch, however she was not able to make the right decision due to the lack of Zürich players inside the box and the organised Milan defending. 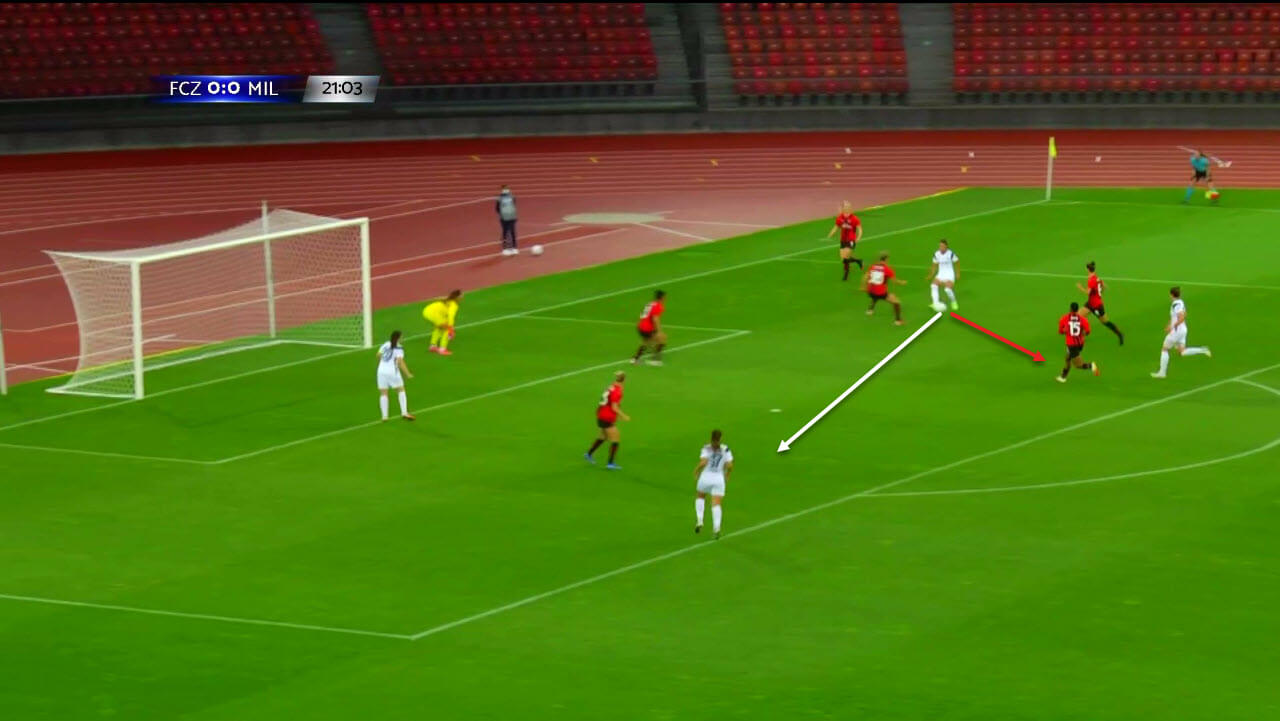 Despite lacking the creativity needed to surpass Milan’s defensive line, Zürich kept relying on a quick passing style with one or two touches maximum until reaching the box. And they exploited a defensive error from Agard in order to score an equalising goal with a powerful shot from Mégroz that surprised Giuliani. 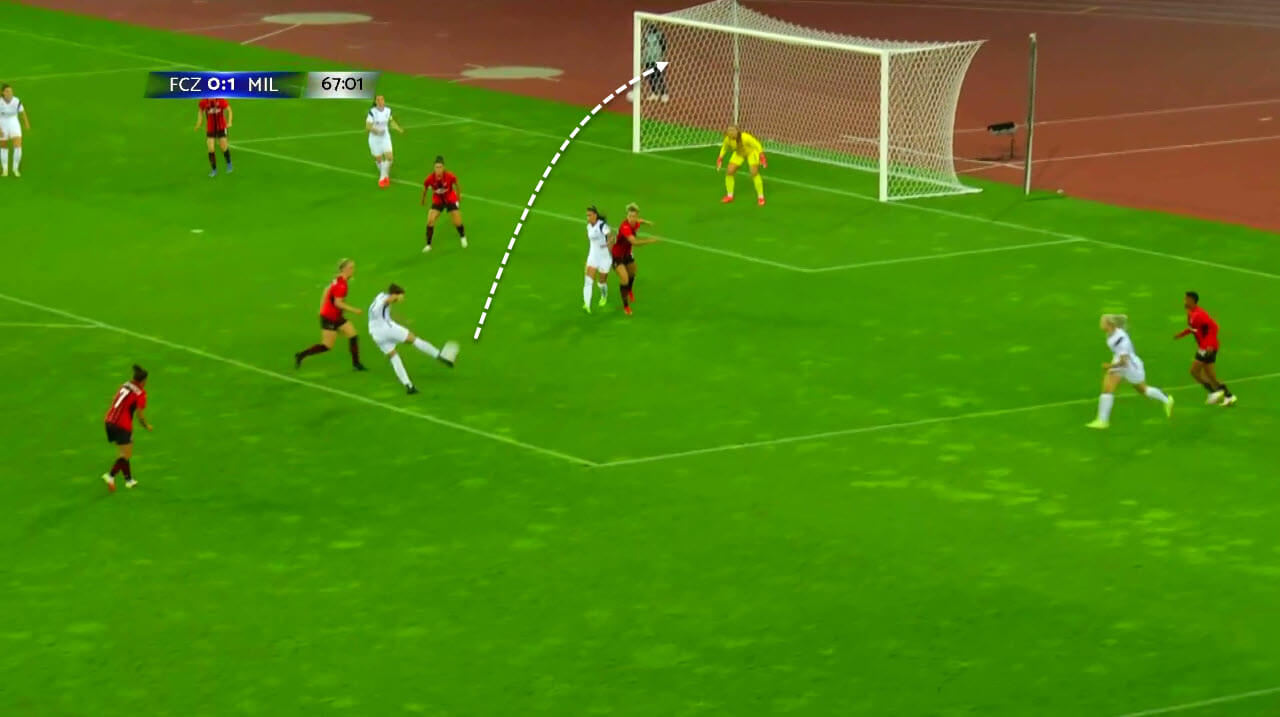 Overall, Zürich were at the same level with Milan throughout the match and had quite similar qualifying chances especially after scoring this goal. However, their recurrent defensive mistakes and Milan’s dangerous attacks made the difference against the wish of the Swiss team. Such a performance should therefore help the team in getting more experience and believing in their abilities to exceed these first rounds in the upcoming seasons, as they knew from this match that they aren’t far away from doing it.

Ganz opted for his preferred 3-5-2 formation and we can’t say that it was not successful in this match since the team won, however, the playing system can be improved by exploiting the players in a more useful way. And perhaps the 4-3-3 is what suits the team best at the moment after signing an excellent right-winger like Thomas and a skilful wing-back who is Andersen. Milan can rely on a defensive line composed of Andersen as a right-back, Fusetti and Agard as centre-backs and Tucceri on the left flank.

This four defenders system would give Milan more fluidity in the build-up and even more security when defending against wingers, the two centre-backs will only be required to defend inside the box while the two full-backs will have defensive duties and advance whenever needed. Switching to such a system or at least alternating between the 3-5-2 and the 4-3-3 formations according to opponents would be helpful for Milan as in the near future as they will face some tougher teams with more talented players in all positions and they should be ready for that.

The newly signed Laura Giuliani has already proved that she is a great addition to Milan’s defence as she is not only powerful in the air and in saving dangerous chances, but she also guides the defensive players and gives instructions whenever needed, and this is very impactful to the whole defensive organisation as it would also save Milan from the consequences of wrong defensive positioning.

In fact, Milan were able to break Zürich’s defence with different weapons. Perhaps the most successful and apparent one in this match was the effective use of the right flank/wing and the excellent deliveries of both Thrige and Thomas to Giacinti who was usually well-positioned inside the box at the time of passing. Both new players on the right flank served Giacinti numerous times and she was able to convert one of Thrige’s excellent through passes towards a goal.

The latter’s ability to read the game, dribble past players while still managing to pass accurately is something that Milan lacks and will need a lot. Thrige brought a lot of danger from the right-wing through her accelerations and accurate crosses, and apart from the goal, her decisions throughout the match were usually right as her passes were also accurate. This means that Milan now have a reliable right-back, especially when knowing that Bergamaschi can be used in more than one other position with even more efficiency. 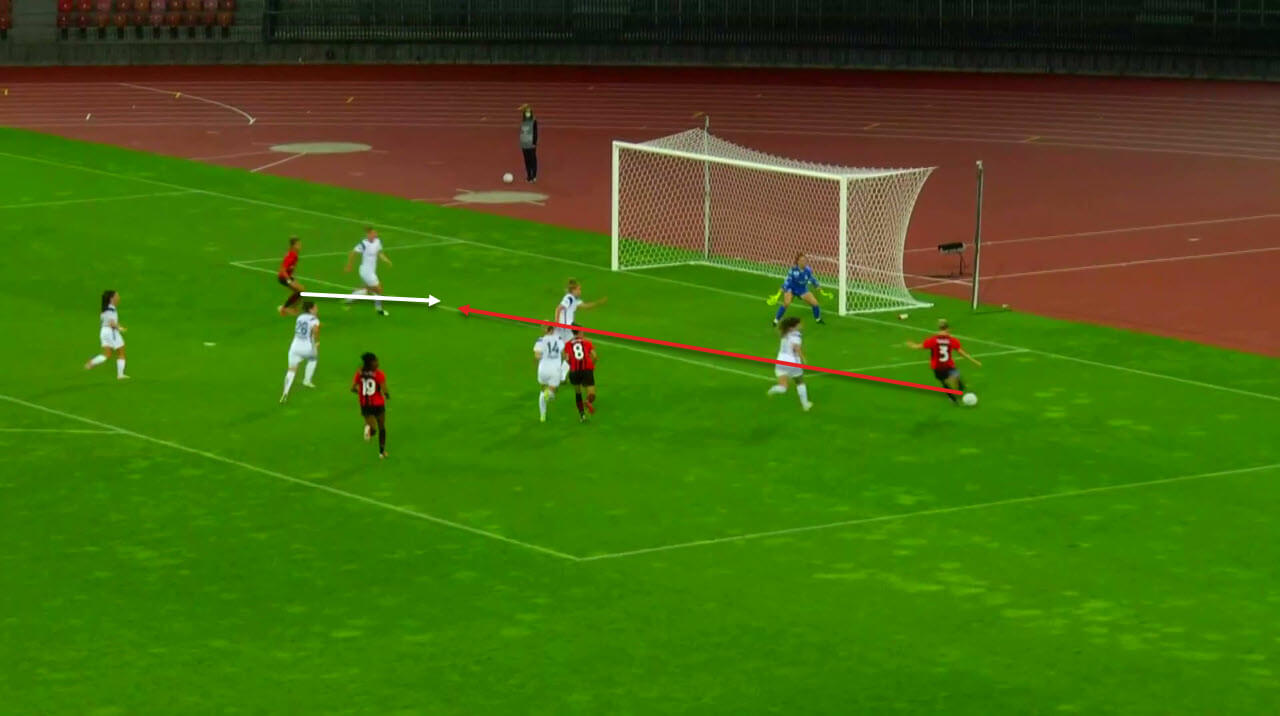 Nevertheless, such excellent passing is not exploited in the way that Milan had to in this match and even though the team shot 16 times with eight times on target, these shots weren’t always as angled or powerful as needed. This was due to the fact that the team relied mainly and almost exclusively on Giacinti for finishing the actions while she misses a large number of these chances per match. In this match for instance, she shot seven times on goal and scored two, which might sound like a good average. However, when looking closely at some of these chances, it becomes evident that most of these chances are missed just due to a lack of concentration or body coordination.

This finishing accuracy should imperatively be addressed at Milan if the team wants to compete in European competitions and reach the group stage in the upcoming seasons as the level in UWCL differs a lot when compared to that of Serie A Women. You can see in this example how Giacinti received a key pass from Thomas but failed to shoot it towards the far post, an angle so distant to the goalkeeper during that action. Giacinti’s shot went central towards the hands of Zürich’s goalkeeper even though Milan’s striker had the time to control and shoot the ball with more precision and power to not miss such a chance. 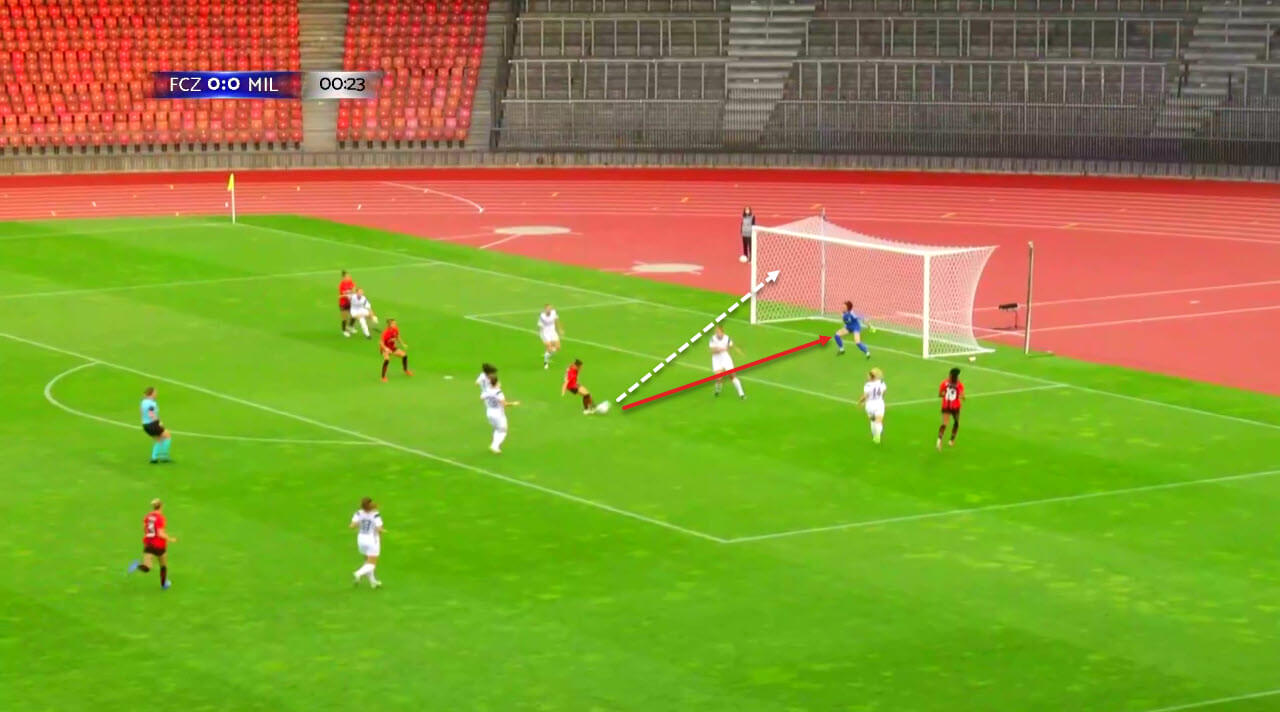 In midfield, it was good for the team to see that Adami assimilated quickly into Milan’s midfield and constituted a complementary duo with Jane, which brings us to suggesting another playing style based on this Adami and Jane complementary. A bit like Kessié and Bennacer, these two players can form a compact midfield line in a 4-2-3-1 formation in the future with Boquete as an advanced playmaker, Bergamaschi and Thomas as wingers and Giacinti as a striker, without forgetting the benched players who can play a big role as well such as Grimshaw, Nina, Codina and others.

Let’s not forget that Grimshaw for instance was the source of Milan’s winning goal after a well-played one-two with Boquete and a key pass to Giacinti. Boquete’s excellent dribbling and passing skills should be exploited better by working on combinations in training between her and the other attacking players surrounding her in order to not find herself in an empty circle. And this is why the chemistry seen in this match between her, Grimshaw and Giacinti should be consolidated even further since we saw how Grimshaw’s substitution helped Boquete in midfield and allowed her to be even more decisive. 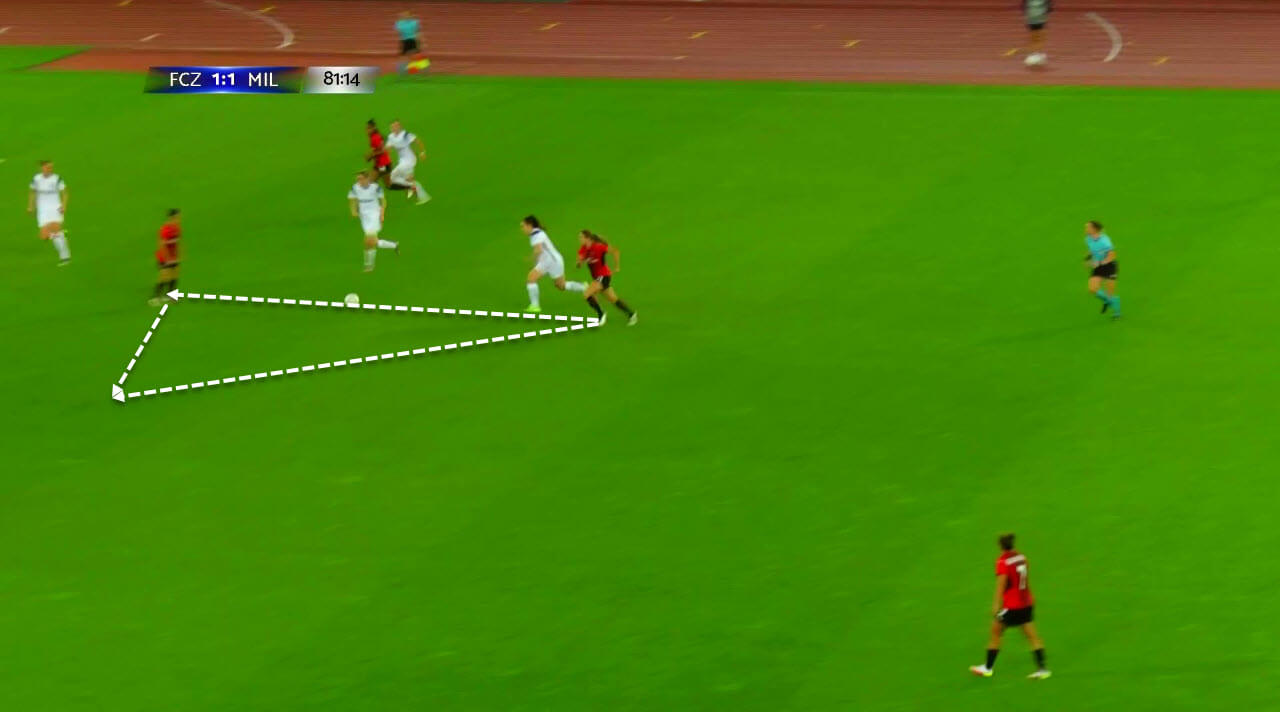 Despite winning in this match, Milan lost against Hoffenheim and were out of the tournament as they failed to exploit the chances they had and made defensive mistakes. A lot of work is still needed from the Rossonere to bridge the gap and be excellent in UWCL.

On the other side, Zürich should not be ashamed of their performance against Milan since they played well, managed to score and complicate things for their opponent even though they were not as solid as needed in defence.