Barcelona Women faced Wolfsburg Women in the UEFA Women’s Champions League semi-final and this first leg witnessed a huge and deserved 5-1 win for the locals who played at Camp Nou with 91,648 supporters present at the stadium, breaking their own attendance record in a women’s game which was 91,553 during their match against Real Madrid Women.

To put things into their context, Barcelona qualified from the group stage phase top of the group after battling with Arsenal, Hoffenheim and HB Køge and then they were put in a direct confrontation with their Spanish rival, Real Madrid, in the quarter-finals.

Barcelona won the tie deservedly with 8-3 on aggregate to find themselves in the semi-finals against Wolfsburg. The Blaugrana didn’t show any signs of worry or stress during this first leg as they were able to score five goals against an experienced team without conceding too much. Nevertheless, the team could have done better on certain aspects and we will come to that later in the article.

On the other side, Wolfsburg were not given easy opponents either since they were drawn into a group formed of Juventus, Chelsea and Servette, one of this season’s most difficult groups. Yet, they were able to qualify on top of their group with the same number of points as Juventus and Chelsea but with superiority in terms of goal difference.

Afterwards, Wolfsburg encountered Arsenal in the quarter-finals and were able to turn the tables on them in Germany after they drew 1-1 at the Emirates Stadium. Being able to knockout a team like Arsenal from the competition was a great accomplishment for Wolfsburg this season even though they are historically used to reaching semi-finals and finals regularly. Removing Arsenal from the competition paved the way for them to meet Barcelona in the semi-finals with a lot of confidence knowing that Wolfsburg knocked Barcelona out of the UWCL in 2019/2020’s semi-final.

However, Wolfsburg didn’t cope with Barcelona’s excellent attacking actions and playing system in this first leg and are now obliged to score at least four goals without conceding any if they plan on qualifying for the final. Although this doesn’t sound doable for many followers of the game, Wolfsburg proved during the past few seasons that they can do such achievements and the examples were many. But at the same time, Barcelona’s current form won’t make things easy for Wolfsburg as this team is able to score at any time given their excellent playmaking abilities.

In this tactical analysis article, we will be exploring Barcelona’s excellent attacking performance and tactics to analyse how they were able to penetrate into Wolfsburg’s penalty box so often while analysing Wolfsburg’s unconvincing performance both from an attacking and a defensive perspective.

On the other side, Wolfsburg opted for the 4-2-3-1 formation with Almuth Schult as a goalkeeper, Joelle Wedemeyer, Kathrin Hendrich, Dominique Janssen and Felicitas Rauch in defence, Lena Lattwein and Alexandra Popp as central midfielders, Svenja Huth and Sveindís Jane Jónsdóttir on the wings with Jill Roord playing as an advanced playmaker just behind the striker, Tabea Waßmuth. 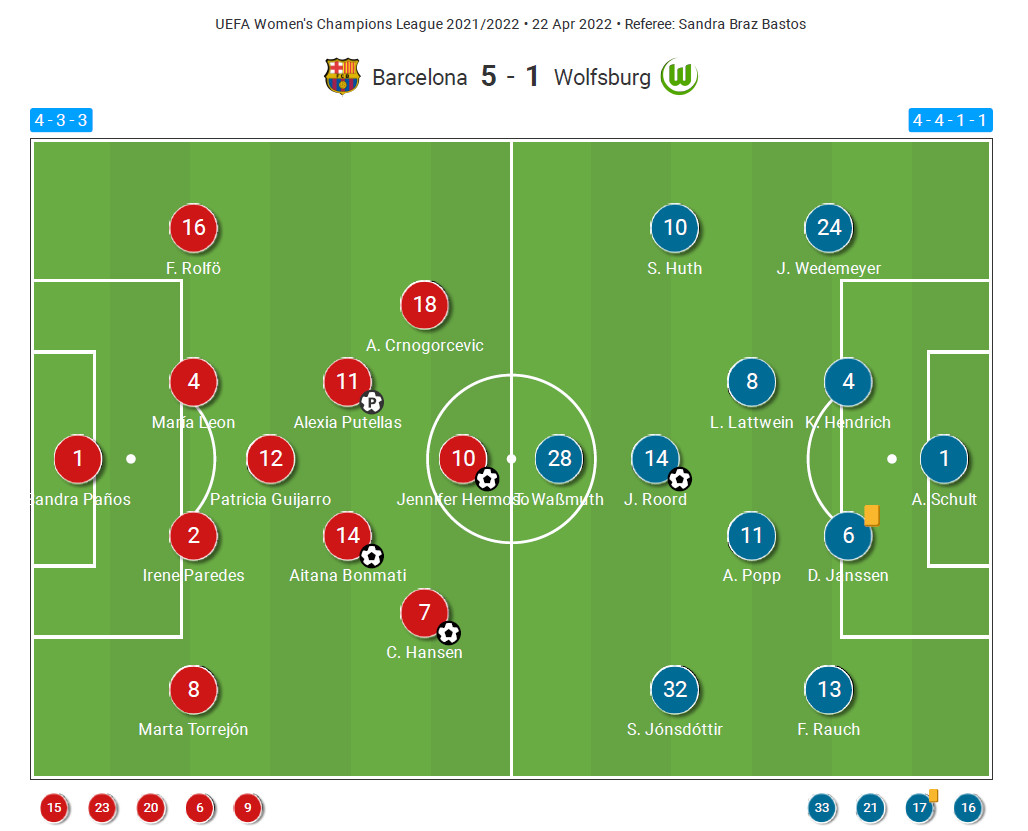 Barcelona didn’t think twice before attacking Wolfsburg’s final third with their full weight. They were aware of their abilities in terms of quick and accurate passing in that area as well as their intelligent movements with and without the ball. The team relied a lot on Hansen, Crnogorčević and Rolfö since these players are known to be excellent in penetration, dribbling past opponents and finishing. What is even more impressive is playing Rolfö as a left-back in order to have a double attacking weapon on the left wing. This aspect was exploited very well by allowing Rolfö to advance so often and make Crnogorčević lean towards the box in order to have more players inside the box and leave more space for the Swedish player on the left-wing. As you can see in this picture, Rolfö was able to cut inside several times in this match, creating a lot of danger either by aiming for a shot or by passing to one of her teammates, while Crnogorčević often moved to the box asking for the ball and keeping a defender marking her. 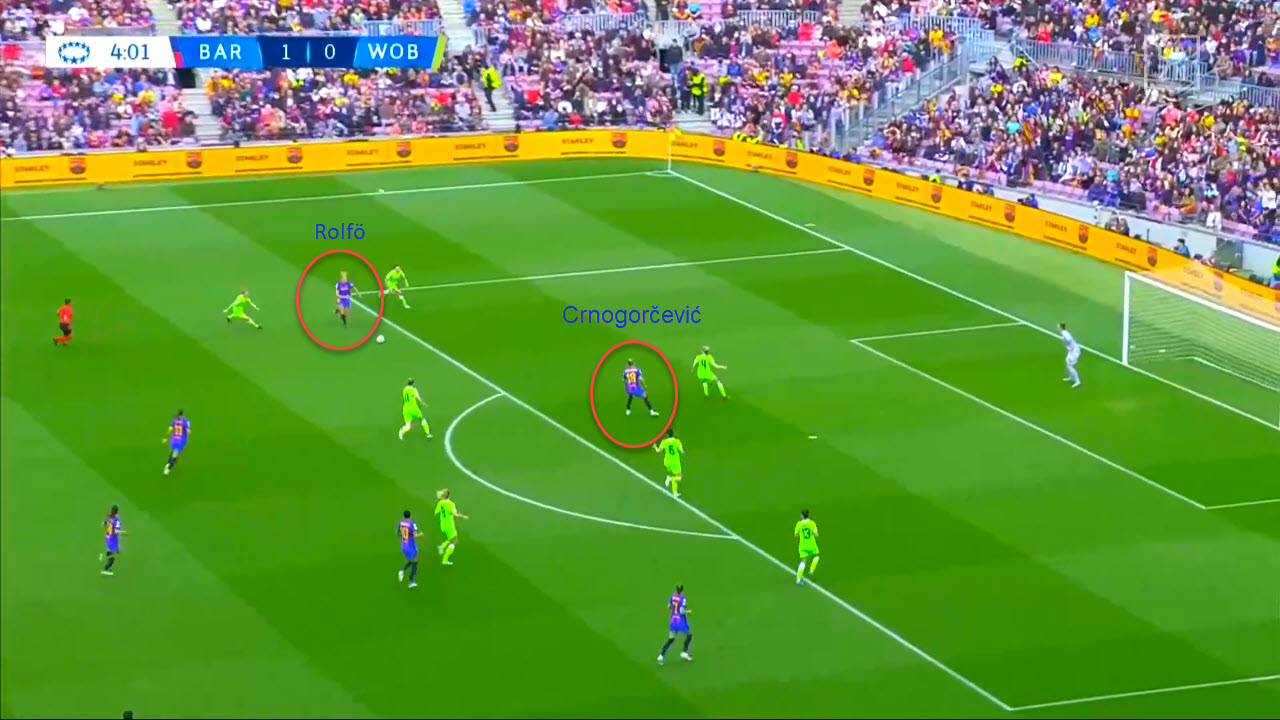 The first Barcelona goal that scored by Bonmatí following an excellent long pass from Rolfö as both players proved once again with this goal that they are capable of being useful in different positions and roles. Rolfö was able to act like a creative midfielder and provide an accurate assist just in front of Bonmatí who made a striker-like off the ball movement in order to escape from her marker without falling in the offside trap and meet the ball in the right place, protect it well with her body before shooting it inside the net with precision. This versatility in terms of roles and positions can harm any team and the ability of Barcelona players to exchange positions continuously and without committing mistakes was fundamental in breaking Wolfsburg’s defence in this match. 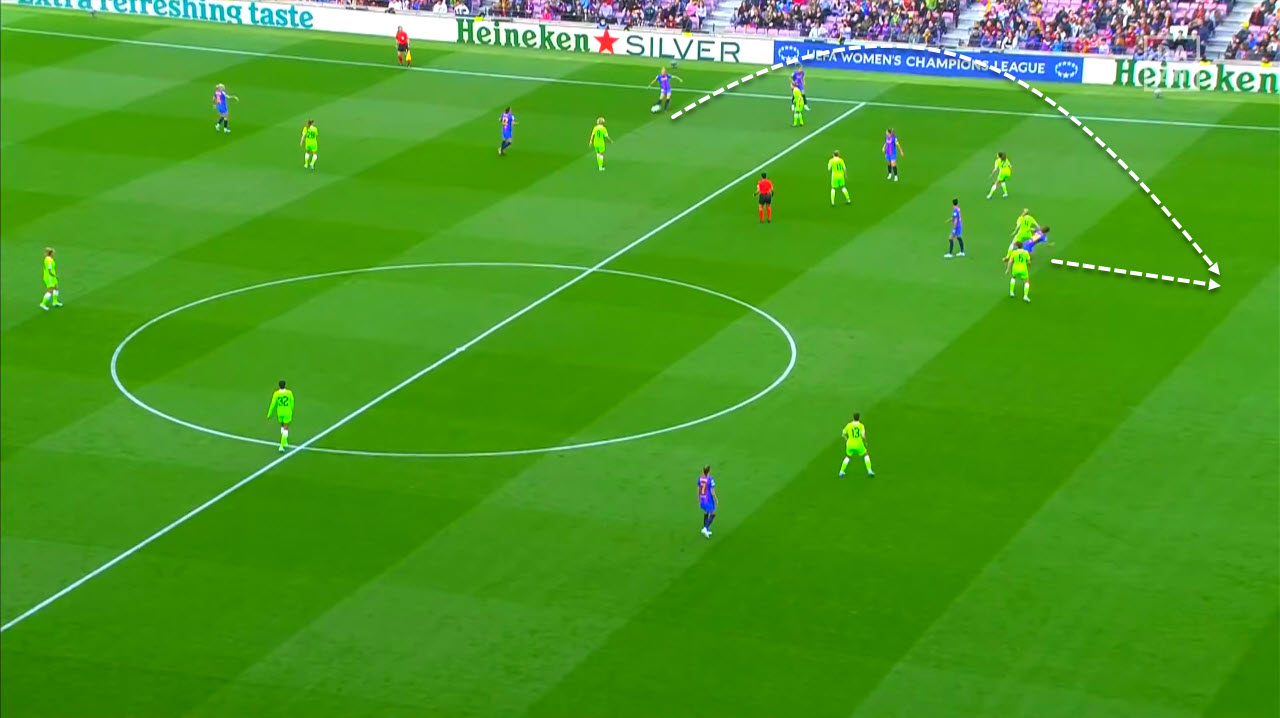 Soon after their first goal, Barcelona added a second goal thanks to Hansen’s excellent penetration, dribbling skills and precise shot. But most of all, it is important to check how the action was born. In fact, it was Crnogorčević who pressed Janssen and intercepted the ball from her even though this happened on the right-wing and not on her left-wing. Then, she passed the ball to Hansen, who found herself in front of an interval while Wolfsburg defenders were a bit distant. Hansen was quick enough to get rid of three defenders thanks to her acceleration before using her skills in a magnificent way to avoid Wedemeyer’s disturbance by feinting to shoot with her right foot and doing so with her left foot, curling the ball near the far post with excellent technique. 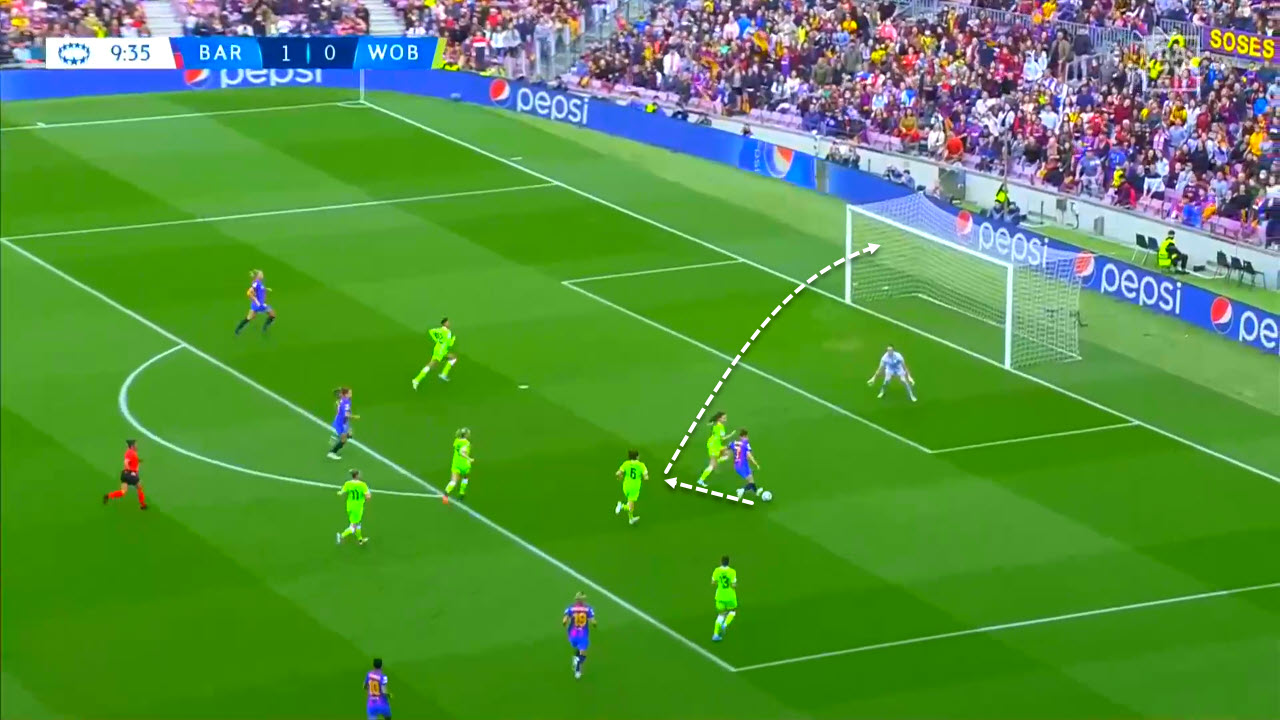 Barcelona exploited the fact that Wolfsburg used a high defensive bloc throughout this season by playing short passes in midfield and waiting for a player’s run behind the defensive line to serve her and break Wolfsburg’s defence. This happened during the first goal action and especially in the third goal one when Torrejón gave a pass to Putellas and ran towards the final third to receive a through pass into space while most Wolfsburg defenders were advanced and no one was waiting to cover for Torrejón’s movement since all defenders were away from the penalty box. This caused plenty of problems to Wolfsburg as they paid a lot for their decision to rely on such a defensive system that allows plenty of space to Barcelona’s attacking players. After receiving the ball, Torrejón gave an assist to Hermoso who rarely misses from these situations. 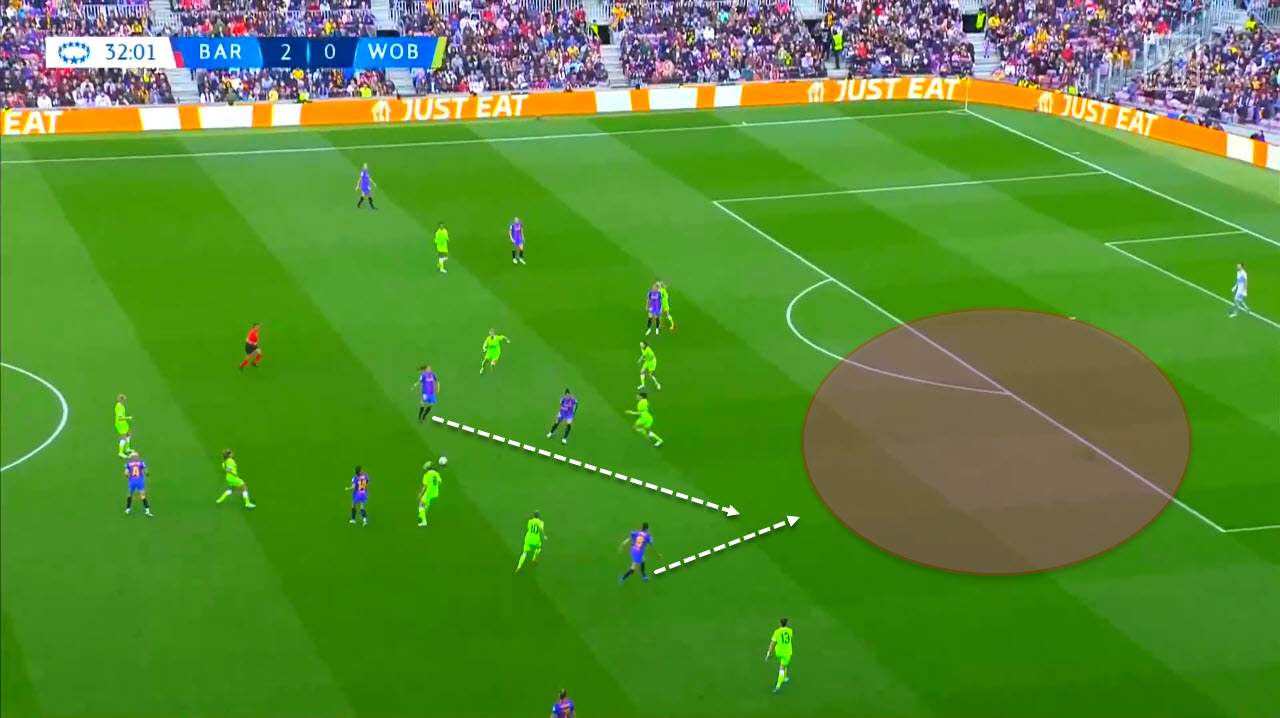 The fourth Barcelona goal follows almost the same idea as the first one but with a change of players. This time, it was Guijarro who had the ball in midfield and saw Putellas’ movement towards the final third and especially the space left behind Wolfsburg’s defence. She therefore served Putellas with an accurate through pass and the latter finished the action successfully and without problems since Wolfsburg defenders were distant from her. 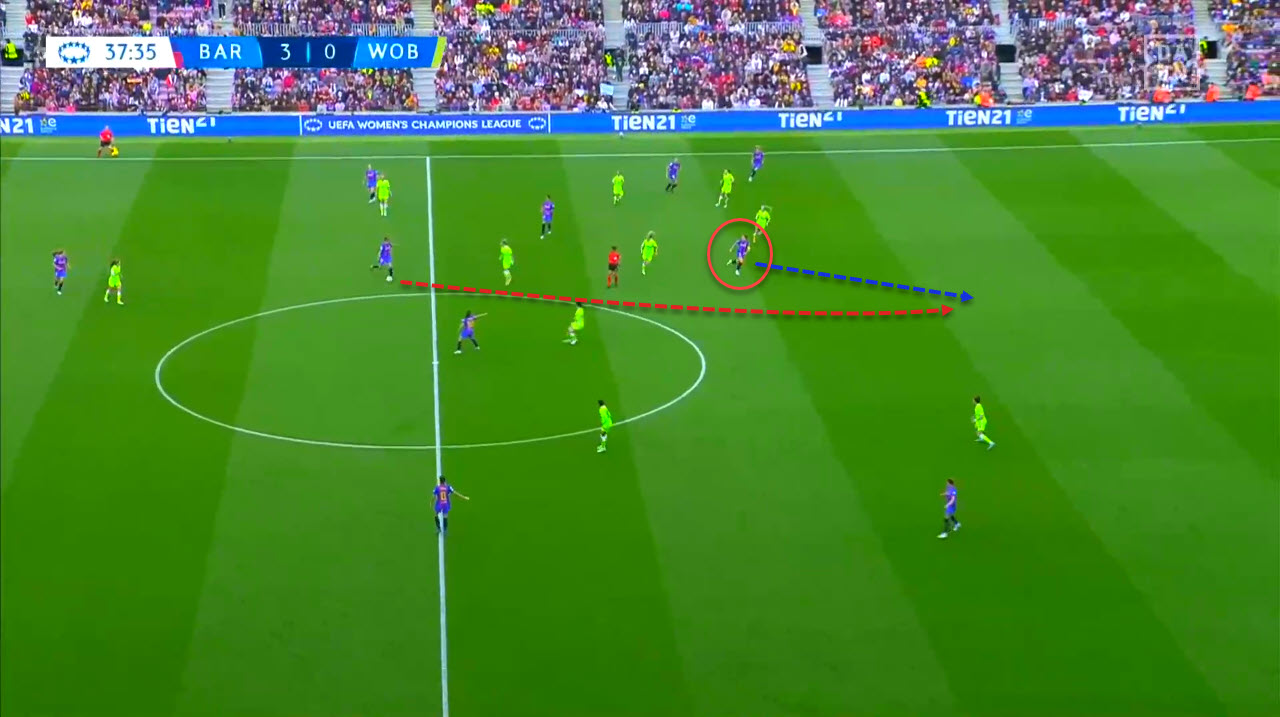 Despite adding a fifth goal thanks to a penalty converted by Putellas, Barcelona had the chance of scoring two or three other goals minimum in this match but they failed to do so due to a lack of concentration in front of goal and inaccurate finishing on many occasions. For instance, Rolfö had a golden chance to score a goal after asking for a pass and receiving a great one from Putellas at the back of defenders. However, she failed to finish in the right way despite having the time needed to make the adequate shooting decision. 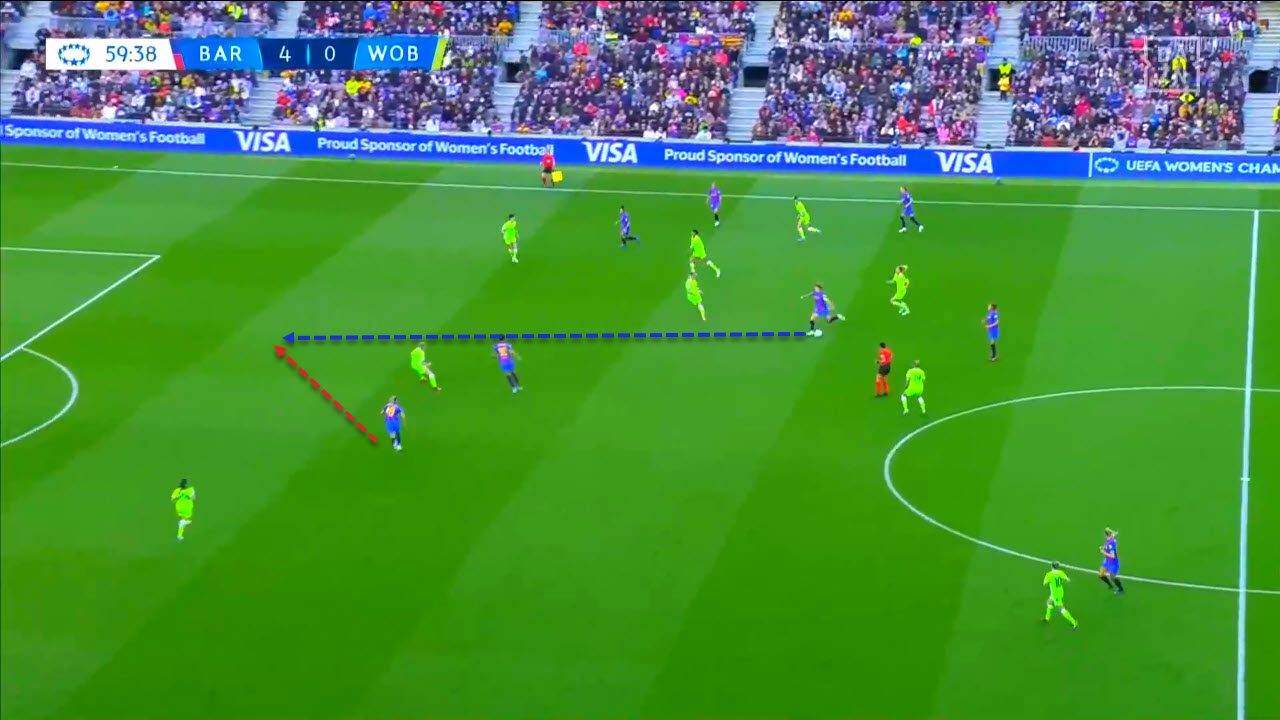 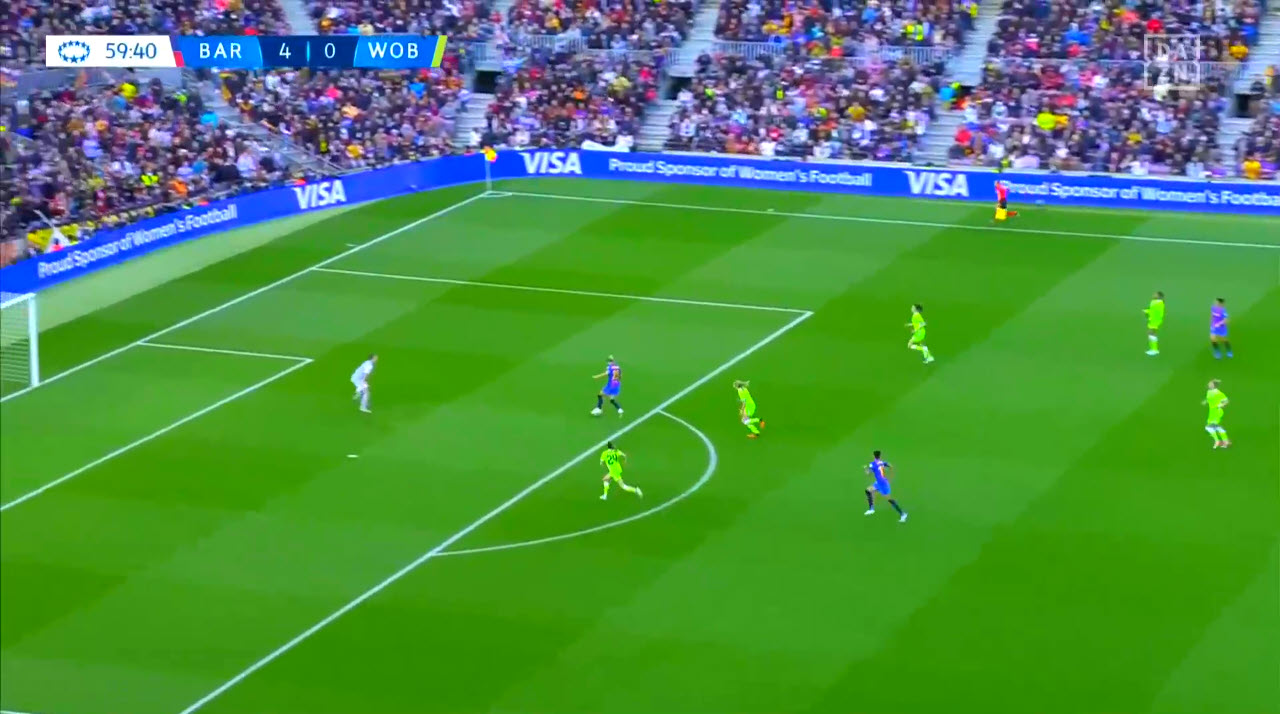 The same type of mistake happened to Asisat Oshoala who missed two concrete chances in front of Schult. Therefore, what Barcelona need to improve and work on in the future is how to deal with goalkeepers in one-on-one situations given that some Barcelona players didn’t really know how to act properly in these situations. Other than that, Barcelona’s performance was excellent from all perspectives despite conceding a goal. 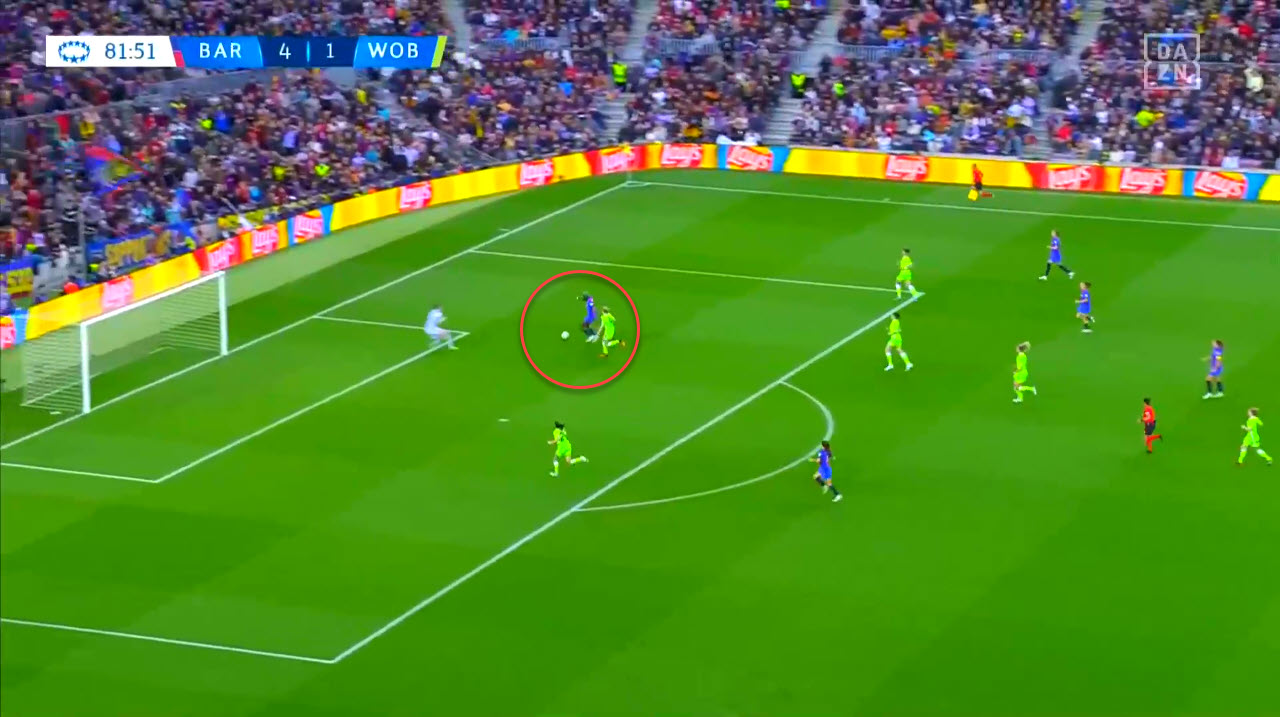 Wolfsburg’s defensive performance was horrible in this match due to the persistence in using inadequate defensive tactics throughout the match. Playing with a high defensive bloc in an attempt to fill the midfield and stop Barcelona players before reaching the box while relying on the offside trap to save the team from penetrations was never going to work against a team like Barcelona since their players are quick, their passes are usually accurate and are dangerous in front of goal. Moreover, they have plenty of players with great vision. Therefore, relying on such tactics against this type of team was a very risky choice for Wolfsburg.  The result would have been less heavy for Wolfsburg if they switched their defensive plans and retreated a little bit as that would have allowed them to limit Barcelona’s penetrations and have more chance to stop their attacks. Wolfsburg however had other plans and preferred to stick to the high defensive bloc idea in an attempt to limit the zone of manoeuvre for Barcelona, as you can see below. 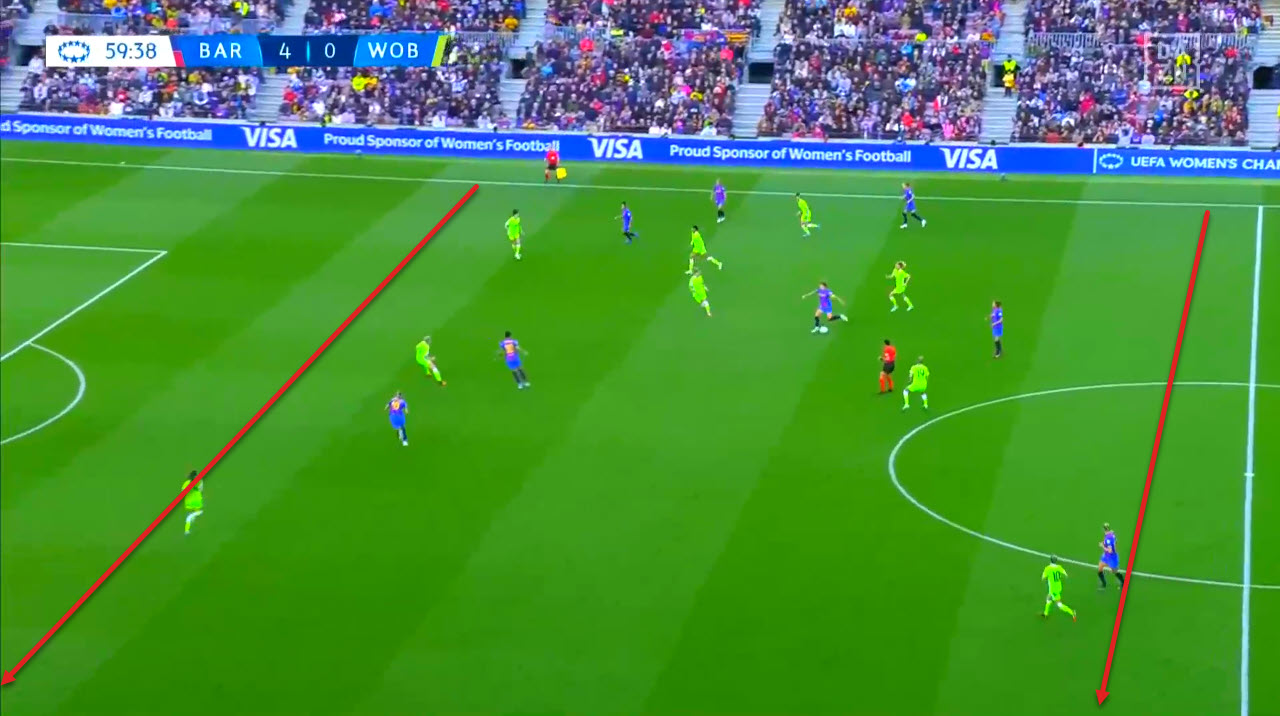 Wolfsburg conceded 33 shots in this match, 23 of them being on target. They won 48,24% of defensive duels and 32% of aerial duels, which explains the number of attacks the team conceded in this match. And from an attacking perspective, the team could have done better if they created more counter-attacking opportunities. But that wasn’t really possible due to Barcelona’s continuous circulation of the ball and their possession rate which reached 66,46%. Nevertheless, in one of Wolfsburg’s rare counter-attacks, Waßmuth intercepted the ball and advanced until she found herself in a 3 vs 2 situation before passing to Roord at the right timing when she saw her being partly unmarked and the Netherlands international scored successfully. Wolfsburg however weren’t able to create such counter-attacks so often given that they weren’t able to intercept the ball a lot in order to advance quickly and surprise Barcelona’s defence. 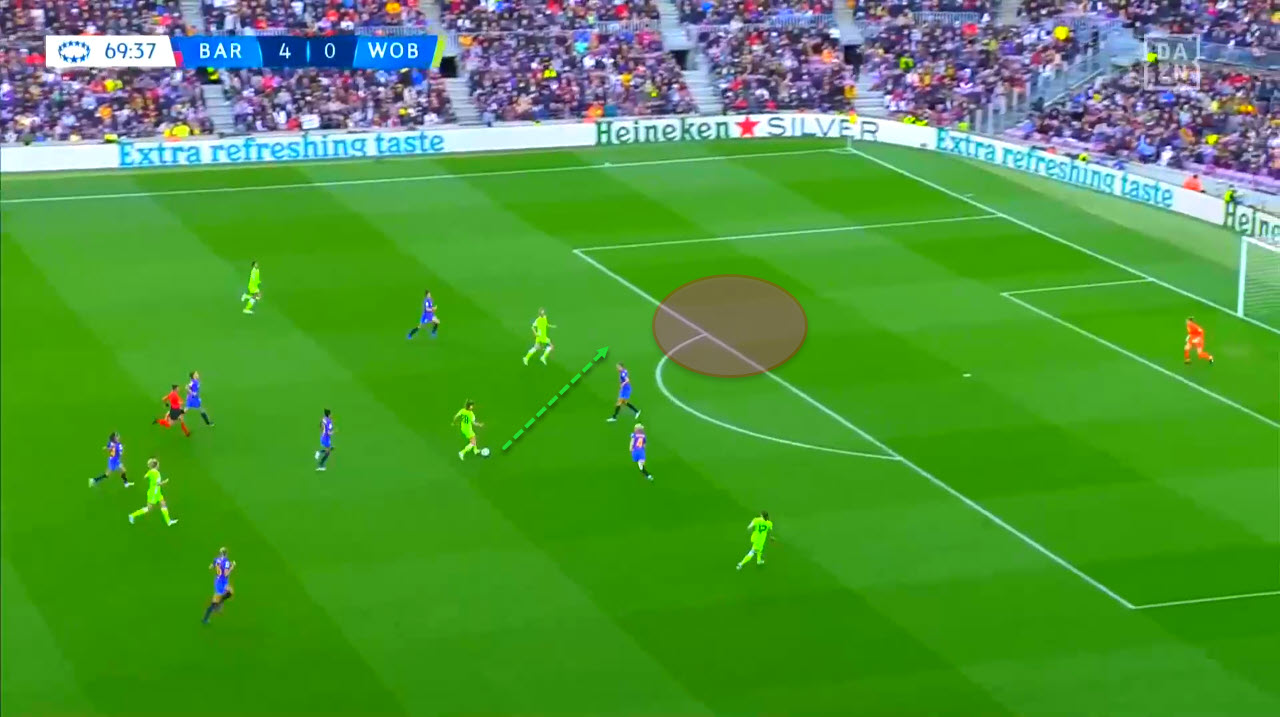 Barcelona proved once again that they have a huge team capable of beating any European opponent at the moment and they showed why they deserve the credits they get during the last period. However, they shouldn’t lack motivation in the second leg as they will need to secure their qualification to the final knowing that Wolfsburg will do their best to try to equalise. The players will need to keep their concentration levels high and not underestimate the game in order to pass the semi-finals.

On the other hand, Wolfsburg will have to study their errors, and work on improving their defensive system/movements while trying to be more dangerous up front by creating a bigger number of opportunities, as opposed to what happened in the first leg. Otherwise, their qualification chances will not be concrete.