VFL Wolfsburg: Do they have a difficult season ahead? – data analysis

Last season, VFL Wolfsburg finished 7th in German Bundesliga as TSG 1899 Hoffenheim won their away game against Borussia Dortmund on the last matchday. This means that Hoffenheim is directly qualified for the Europe League whereas Wolfsburg need to play a qualification round. Even if this does not seem to be a difficult task, it means more matches and even one match before the regular Bundesliga season will start. It is obvious that with an anyway tight schedule, these qualification matches will not be very helpful for the players´ recovery. Nevertheless, they will try to play a good role in all three competitions (Bundesliga, DFB Pokal, Europe League) as long as possible.

In this data analysis, we will take a closer look at Wolfsburg´s squad, their players´ data and statistics. Furthermore, this analysis will provide you with Wolfsburg´s playing style.

First of all, we will look at the squad structure and the depth within the team. As you can see in the image below, Wolfsburg´s current squad list has 30 names. This looks like a good squad depth. But, just as an example, Bundesliga competitor Eintracht Frankfurt have 33 players in their squad with one competition less as they did not qualify for Europe last season. This might be a decisive factor next season since there will be no long breaks.

Adding to that, by taking a look at their squad structure, it is striking that the team is unbalanced. Four out of these 30 players are goalkeepers. This is the same number of players as they have for their both full-back positions. Five centre-backs are necessary regarding the high number of matches. The same thing applies for five central midfielders. All in all, they have five wingers (three for the left-wing and two for the right-wing) as well as five forwards. Two central offensive midfielders complete the squad. 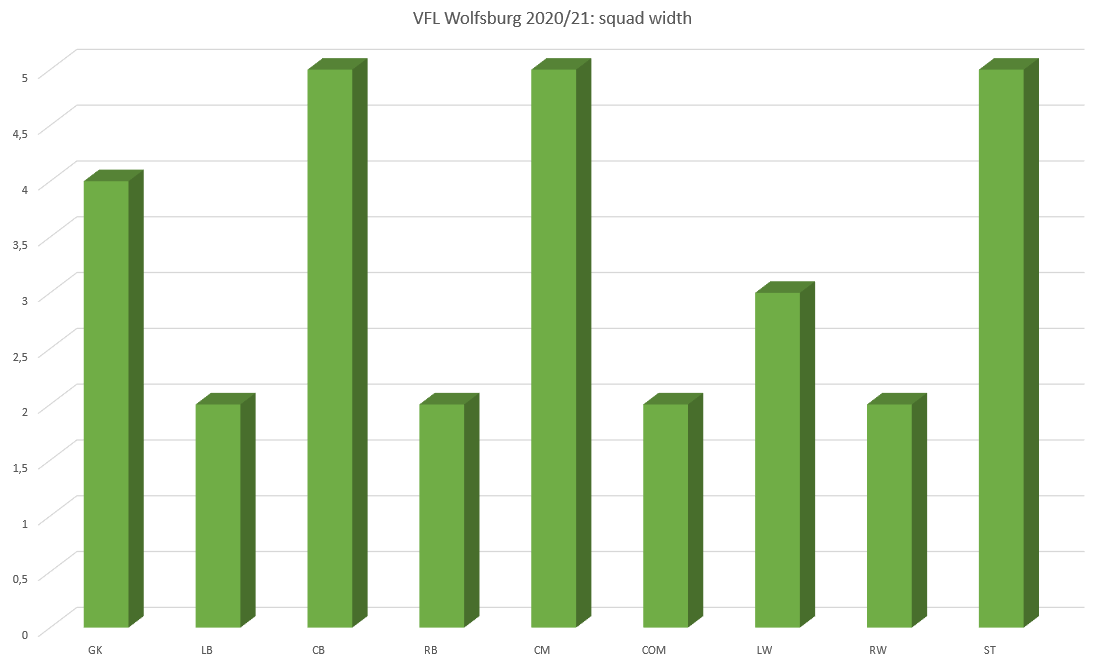 Koen Casteels (28) and Pavao Pervan (32) are two experienced Bundesliga goalkeepers who are supported by Niklas Klinger (24) and Lino Kasten (19). Casteels is a goalkeeper of a very high Bundesliga standard as he conceded the sixth-less goals last season (46 in 34 matches). This can be also seen in the image below. The Belgian international player has quite good rates in both cross stopping and goals saved above average. In both categories, he performed better than former world-best goalkeeper Manuel Neuer (FC Bayern). 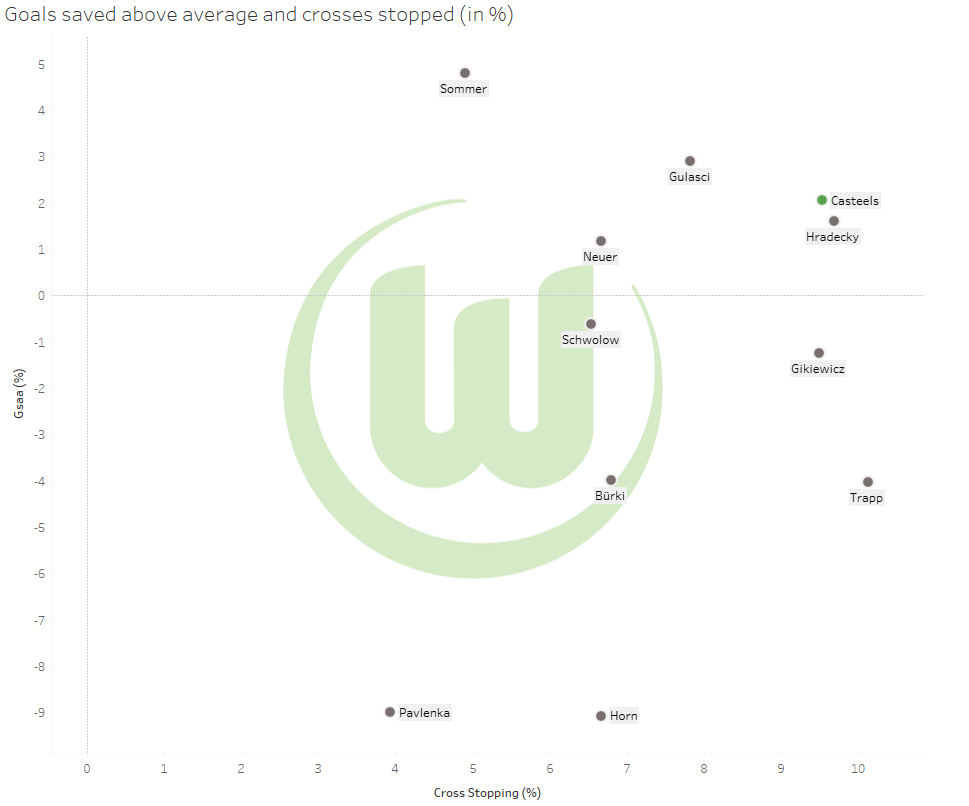 John Anthony Brooks (27) and Marcel Tisserand (27) are experienced centre-backs. With Marin Prongracic (23), Wolfsburg got a solid third centre-back with lots of potential last season. Jeffrey Bruma (28, returns from loan at Mainz 05) and Maxence Lacroix (20, FC Sochaux) are two new players for Oliver Glasner´s team. As we can see in the following scatterplot, Brooks, Tisserand and Prongracic provide a similar amount of successful aerial duels. But, Brooks and Tisserand have much more clearances per 90 minutes. This might be a factor for Glasner by lining-up his starting formation next season. 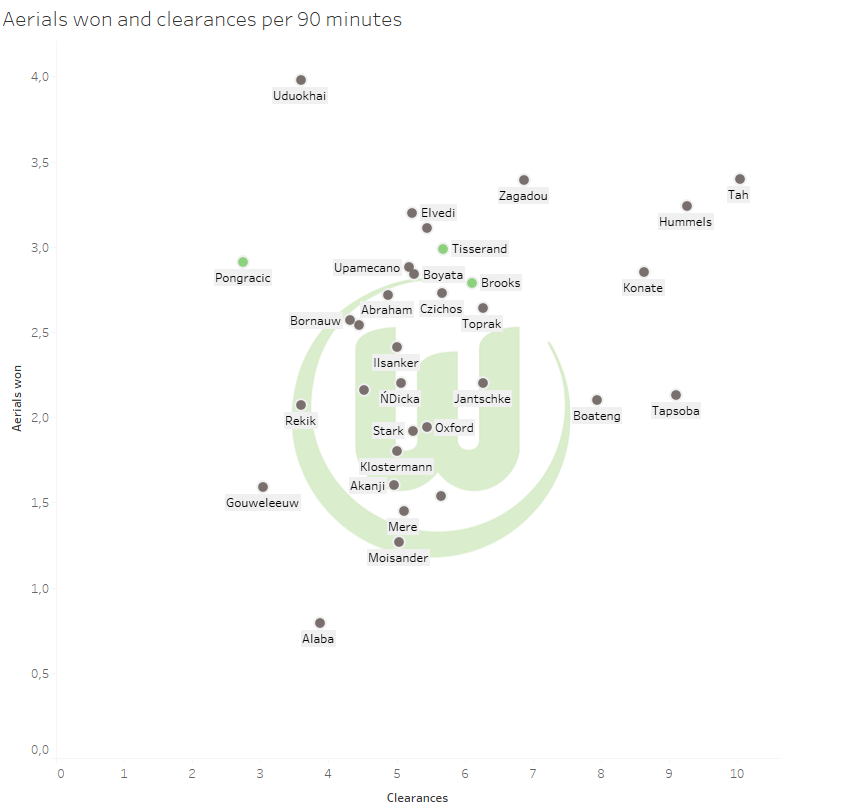 In terms of quality, Wolfsburg is well staffed in their full-back positions. Jérôme Roussillon (27), Paulo Otávio (25), William (25) and Kevin Mbabu (25) are all in the peak of their career. By taking a closer look at their statistics, it is extremely hard to find two starters for Glasner. Only Roussillon seems to be average compared to other full-backs in Bundesliga. The other three Wolfsburg players are three of the best full-backs in the league providing lots of successful pressures per 90 minutes. However, William and Otávio might be the favorites as regular starters. 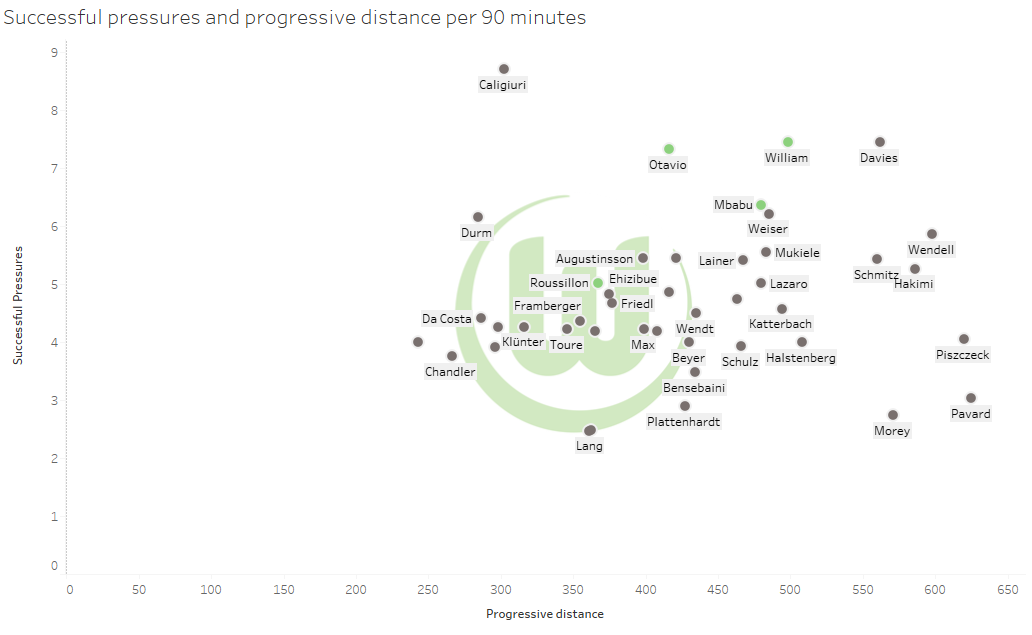 In central midfield, Wolfsburg again have lots of experience in their squad. Captain Josuha Guilavogui (29), Ignacio Camacho (30), Maximilian Arnold (26) and Yannick Gerhardt (26) are solid Bundesliga players who are very important to stabilize the team. With Xaver Schlager (22), Wolfsburg has another option. Guilavogui seems to be the most completed central midfielder providing a good pass completion (82%) and 1,9 interceptions per 90 minutes. Camacho is more useful for the defence by providing the third-most interceptions per 90 minutes (3,6). Schlager, Gerhardt and Arnold are rather less than average compared to other central midfielders in Bundesliga. 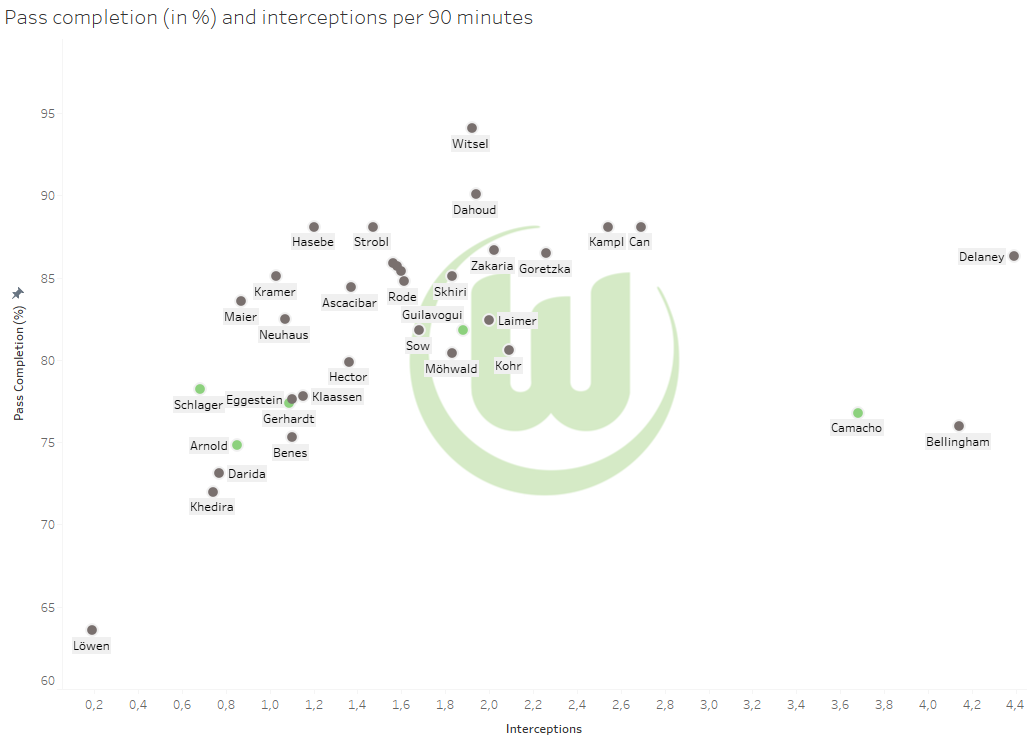 The central offensive midfield is not of a high Bundesliga standard with only two players able to play the position. Yunus Malli (28) was already sorted out as he left the club on loan last year to play one season for Union Berlin. Julian Justvan (22) is also part of Wolfsburg´s U23 and therefore, might be no option for Glasner. Looking at Malli´s stats, he is no decision-maker anymore. That is why even if Wolfsburg played in a 4-4-2 (respectively 4-2-2-2) last season, they do not set on offensive midfielders. 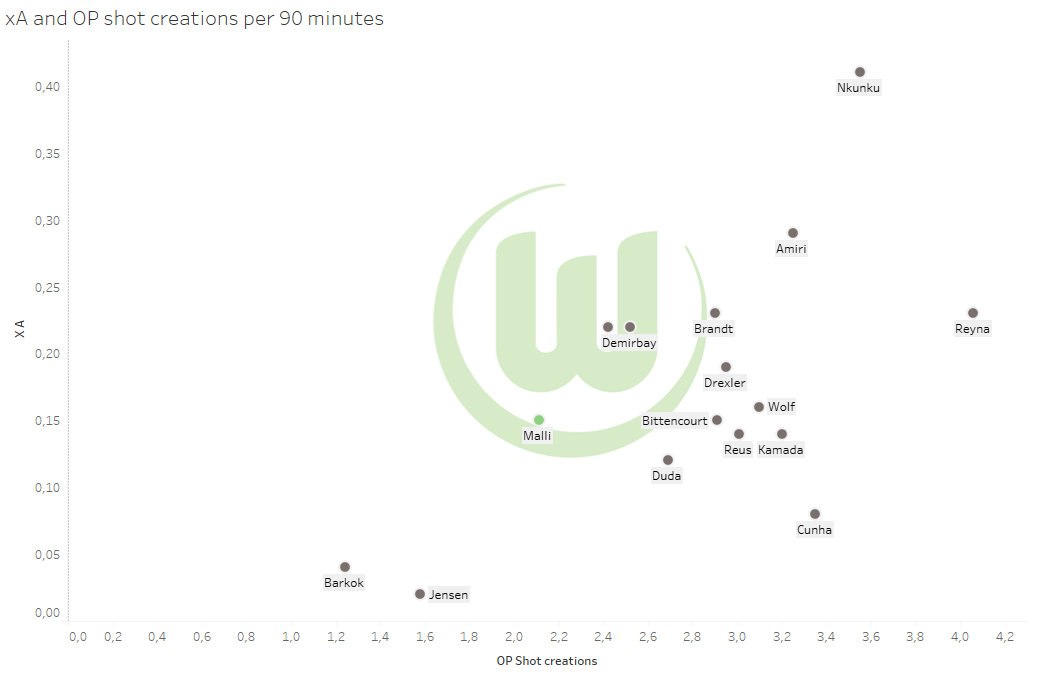 João Victor (26, 2 goals and 2 assists), Josip Brekalo (22, 3 goals and 4 assists) and Renato Steffen (28, 6 goals and 3 assists) will fight to get the two offensive midfield places in the 4-4-2 formation. John Yeboah (20, returns from loan at VVV-Venlo) and Felix Klaus (27) will need to take the back-up roles. Compared to other wingers in Bundesliga, the output of Wolfsburg´s players was not good enough last season. Nevertheless, João Victor, Brekalo and Steffen might improve these numbers as they are very smart players with even more potential. 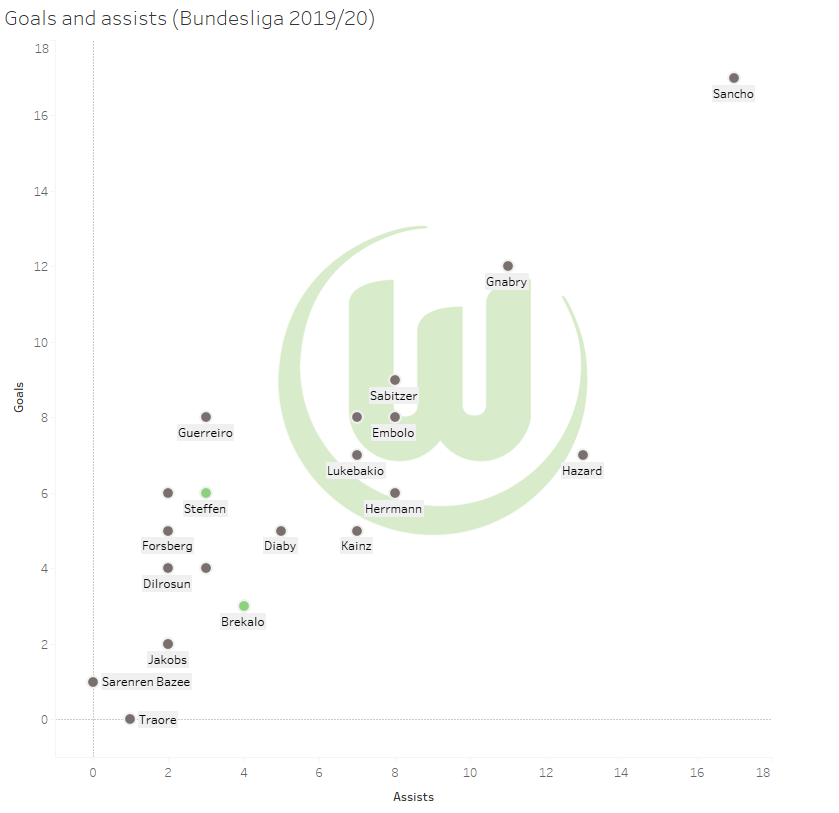 In the forward position, Wolfsburg have five players: Wout Weghorst (28), Daniel Ginczek (29), Admir Mehmedi (29) were in the squad last season already. With Bartosz Bialek (18, Zaglebie Lubin) and Omar Marmoush (21, VFL Wolfsburg U23) two talented young players are new to the squad. Weghorst (16 goals and 3 assists) and Ginczek are likely to be set for the two positions up-front with Bialek and Mehmedi as back-ups. 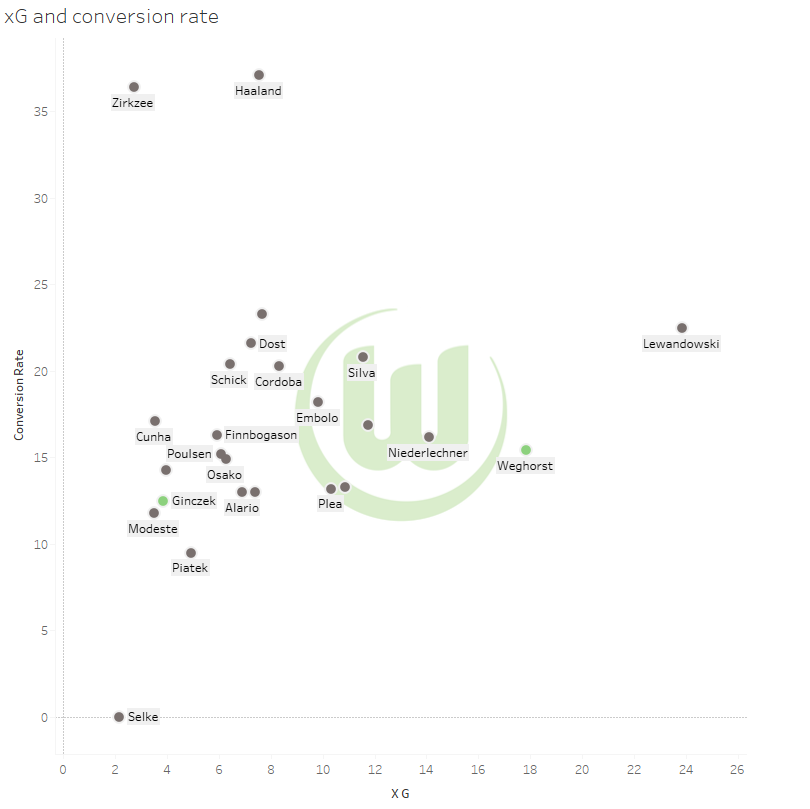 Wolfsburg´s head coach Glasner does not have a reason to change his line-up as most of the players in the current squad played for Wolfsburg last season already. They are used to the system and played a quite good season. With their extremely good full-backs, Wolfsburg will play them high with the wingers moving more centrally again. We can see this movement in the line-up graphic below. 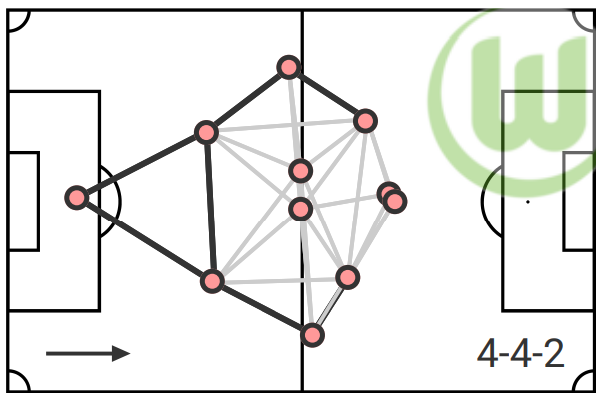 Wolfsburg is lucky to have some of the best full-backs and one of the best out-and-out strikers of the league in their own ranks. However, considering the triple load Wolfsburg will miss their regeneration and especially at the end of the season, they might struggle to bring their best performance. It will be a very tough season and a difficult task to get a place within the top 7 again. They definitely have the quality a Bundesliga club needs, but they will need to improve their squad width to become successful on a long-term again.