Switzerland faced Germany in what was each team’s second UEFA Nations League fixture as they both looked to bounce back from disappointing results in their previous games. Vladimir Petković’s side were beaten 2-1 by Ukraine but were largely poor throughout that game. Meanwhile, die Mannschaft suffered an agonising 1-1 draw to Spain where they conceded in the final minute thanks to a goal from José Gayà.

This tactical analysis will examine the tactics used by both Switzerland and Germany in this UEFA Nations League match. The analysis will highlight how Breel Embolo helped Switzerland dominate early on, how the Swiss failed to take advantage of crossing scenarios and will also touch on Germany’s struggles in the build-up phase. 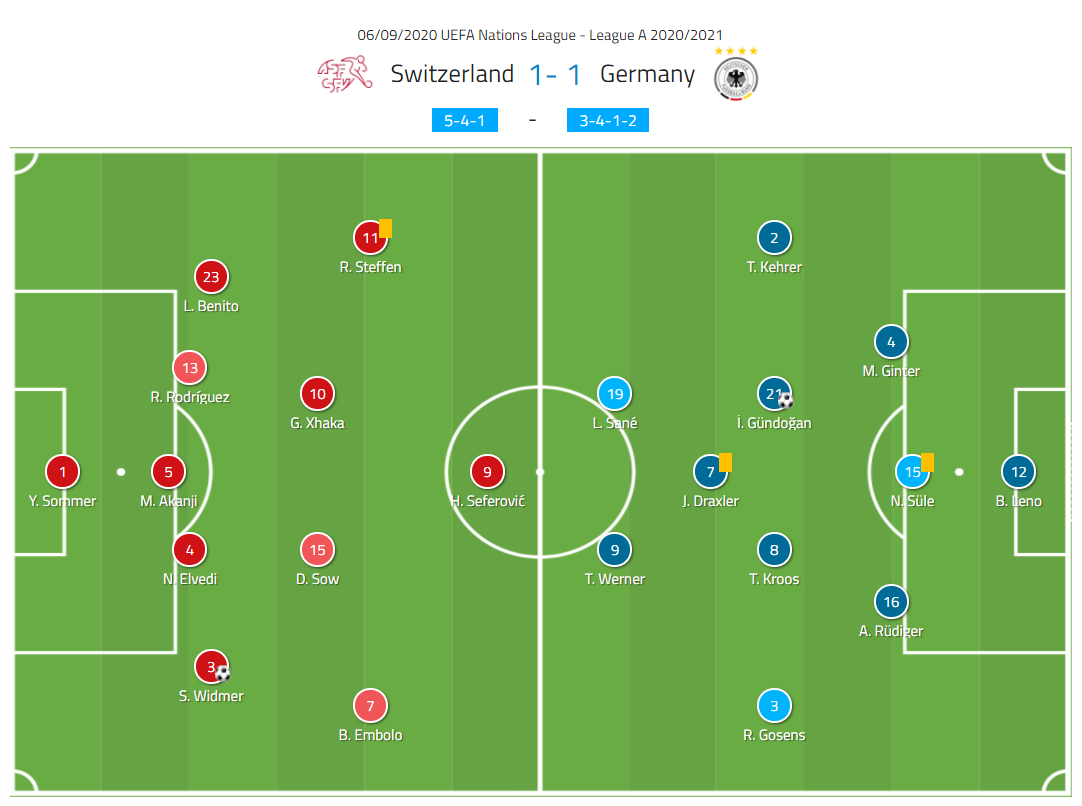 Switzerland set-up in a flexible 5-4-1 formation. Yann Sommer started in goal with a back five of Loris Benito, Ricardo Rodríguez, Manuel Akanji, Nico Elvedi and Silvan Widmer. Arsenal star Granit Xhaka partnered alongside Djibril Sow in midfield with Renato Steffen and Breel Embolo on either side. Haris Seferović started as the lone striker.

Germany began with a similar set-up as they did against Spain with a 3-4-1-2 formation that they used for the majority of the fixture. Joachim Löw opted for a back three consisting of Antonio Rüdiger, Niklas Süle and Matthias Ginter. Robin Gosens and Thilo Kehrer started at wing-back with an experienced double pivot of İlkay Gündoğan and Toni Kroos. Julian Draxler started as the attacking midfielder with Timo Werner and Leroy Sané starting as the front two.

Borussia Mönchengladbach forward Breel Embolo proved to be a key to how Switzerland played against Germany. He started at right wing but in-game, moved centrally to help Seferović and pick up positions in between the lines. Germany looked to man-mark him throughout the game using Chelsea defender Rüdiger as the main player on him but Embolo’s skill set and performance meant that the striker easily won the battle.

Embolo normally dropped in between the lines during the build-up phrase when Switzerland were building up from the back and looked to either play a one-touch pass to a teammate or drive in behind when an opposition defender pressed him. The example below is midway through the second half wherein which Rüdiger had been dragged by the striker countless times and is now even warier of his threat. 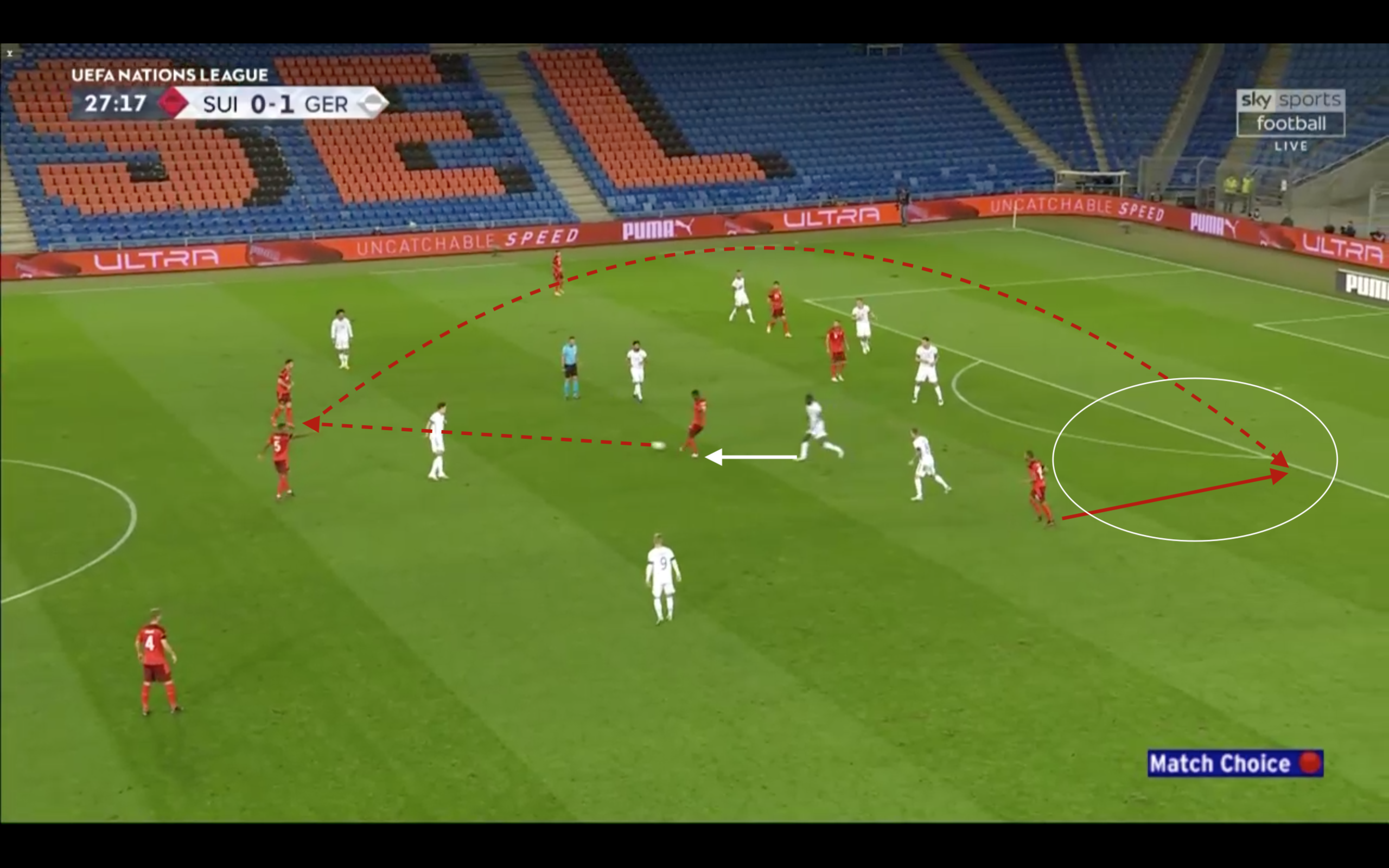 Here, Embolo does drop in between the lines and is closely followed by Rüdiger who is looking to pressure him and win the ball back. However, what this movement by Rüdiger does is that he now vacates his position in defence when he stepped up. When Xhaka receives the pass from Embolo, Sow has the opportunity to run into the vacated space. Kroos doesn’t realise this as he isn’t anticipating Rüdiger stepping up and is, therefore, late to the rotation and can’t cover Sow’s run. Xhaka plays a great pass to Sow who squares it for Seferović for an easy tap in but the striker miscues the effort badly. While Xhaka might get the credit for this move as he made a great pass, Switzerland exploits Germany’s idea to man-mark Embolo with the forward doing a simple but effective job to drag Rüdiger out of position.

This example below showcases how Switzerland used Embolo to progress the play from the back. The first image shows the Swiss defender in possession but he is unable to pass it to Xhaka or Sow in midfield who usually help progress the play since Germany’s Gundogan and Kroos are marking them tightly. This frees up space in between the lines for Embolo once again and Rüdiger once again looks to get the ball out of his feet by pressing him. 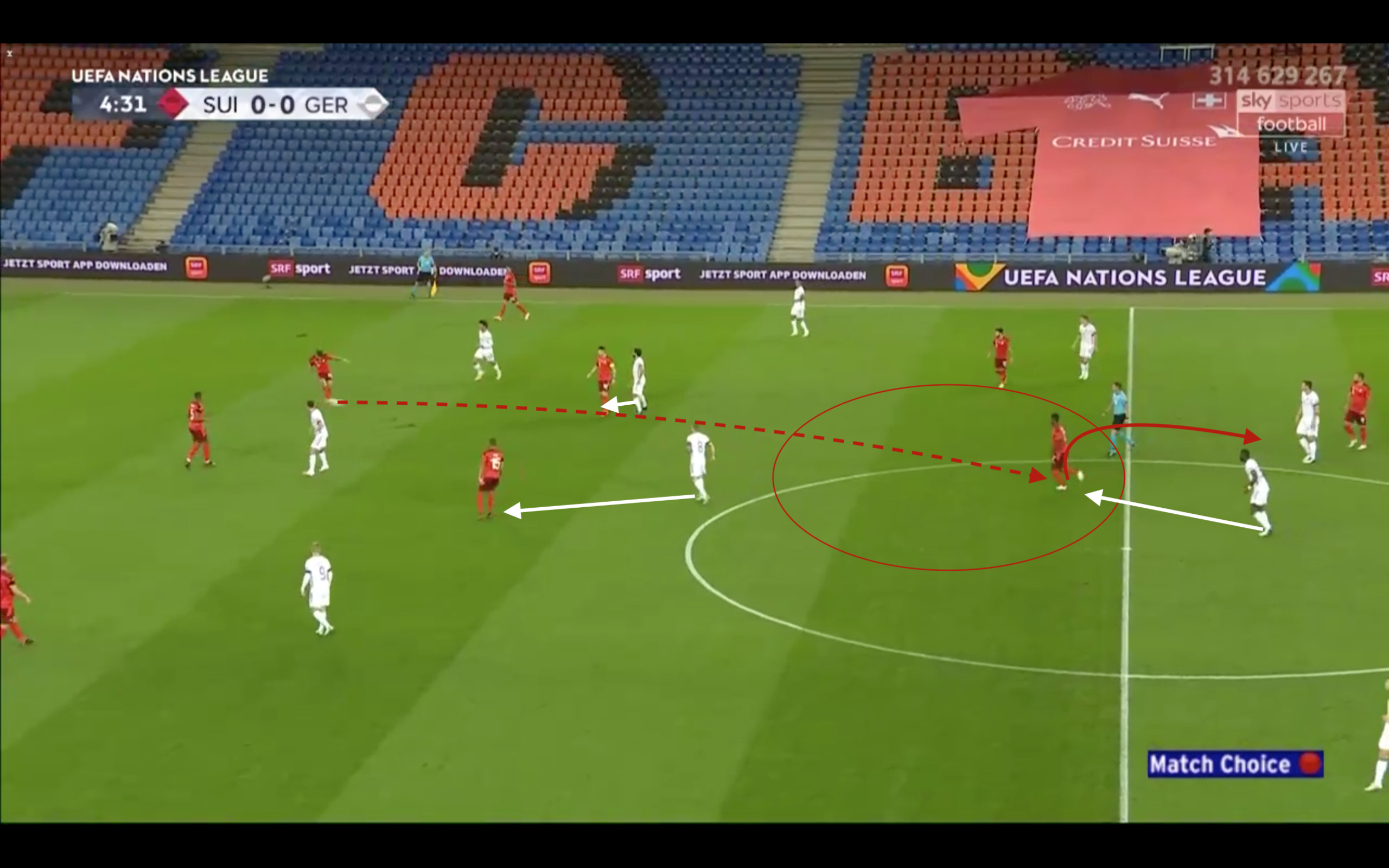 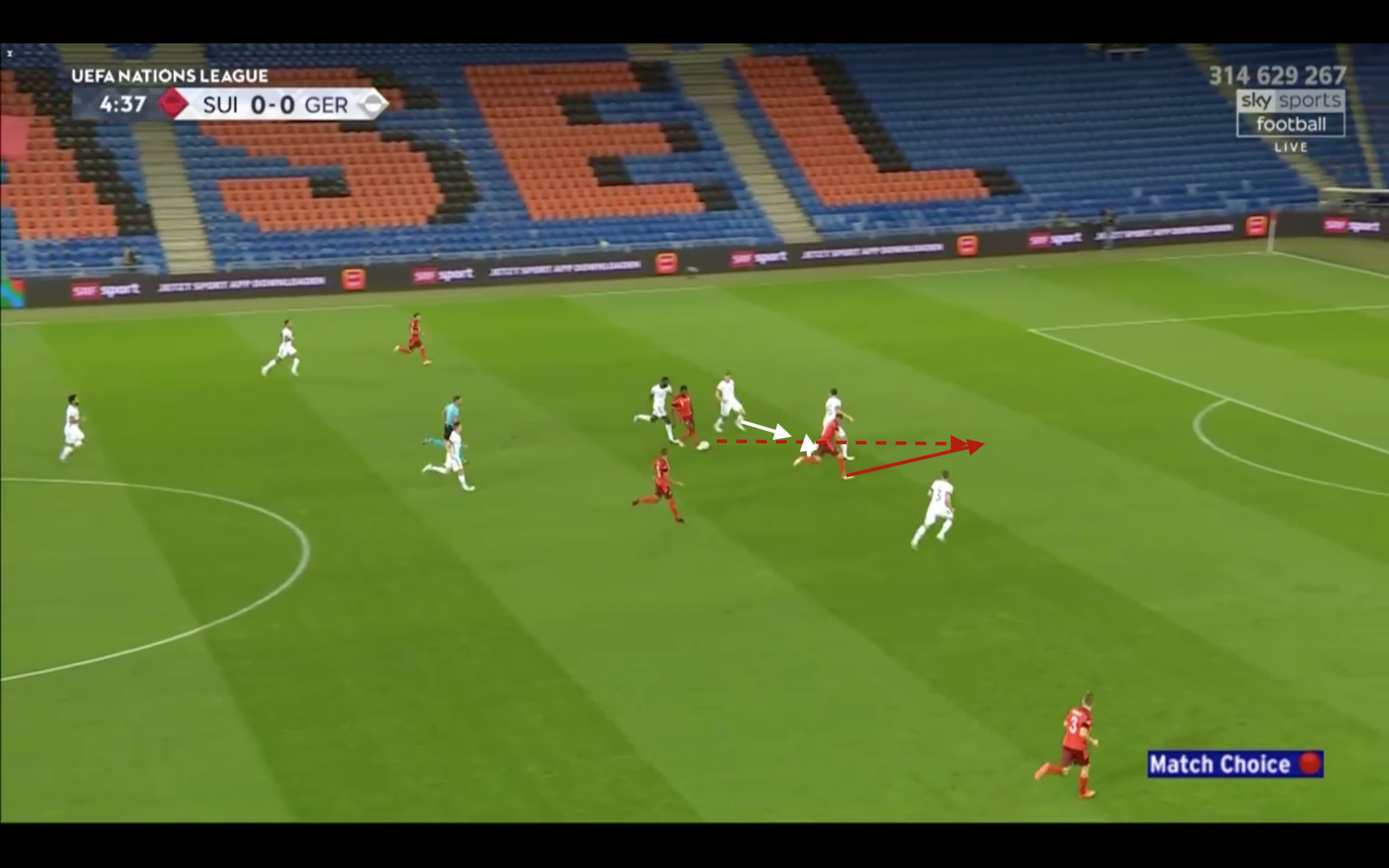 However, Embolo is already somewhat complete even at the age of 23 and can turn one of Germany’s quickest defenders and run into the heart of Germany’s defence. Seferović makes a great run in behind but Ginter and Süle do a great job of preventing the pass to get to him. There were multiple moments like these whether they were runs in behind or vacating space for others to exploit, which highlights how successful. Embolo capped off a superb performance with an assist before being subbed off midway through the second half after he suffered an injury, which coincided with Switzerland becoming much less potent in attack.

When Switzerland got into the final third, they were reliant on crossing to create great opportunities. However, they failed to take advantage of Germany’s poor defensive structure when the balls were played into the box.

The first example is from the right-hand side where Widmer makes a run down that side and has found himself in space after Switzerland overload the left side and switch the ball over. 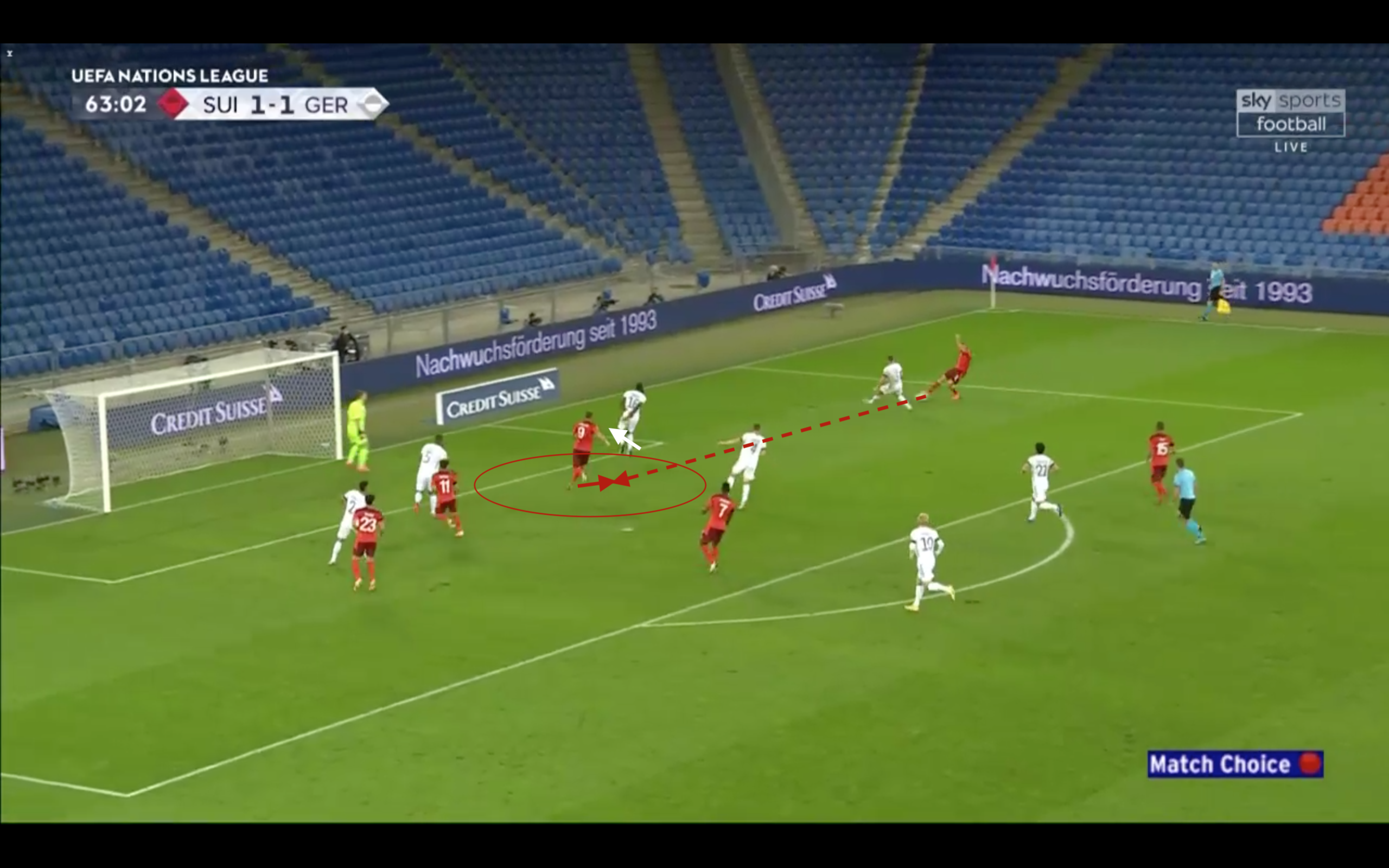 Seferović makes a run into the box but then stops on a dime and Widmer finds him with a floor cross. Rüdiger is supposed to have an eye on the striker and had so when Seferović ran into the box. However, he drops way too deep and forgets about Seferović who he has lost sight of him since he’s focusing only on the ball and thus, the striker has plenty of space for a shot. Luckily for Rüdiger, Seferović once again fails to control the ball and wastes another guilt-edged opportunity, this time to put Switzerland ahead. 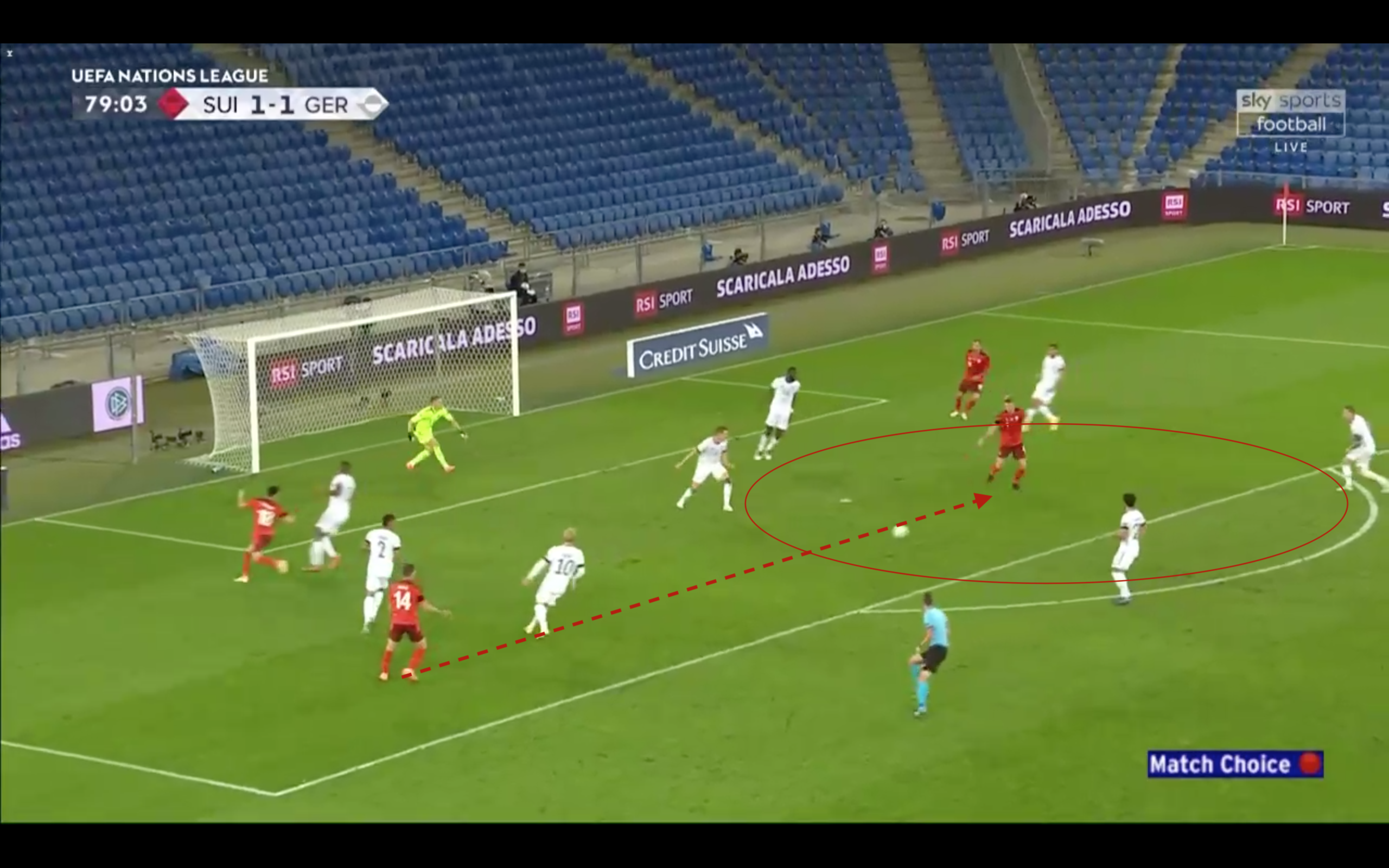 In this example, a similar situation occurs except the whole Germany defence leave the Swiss player open. Substitute Steven Zuber cuts the ball back but it was slightly behind Nico Elvedi who joined the attack for this occasion despite being deployed as a centre-back. Elvedi failed to realise the space he was in so he didn’t connect with the ball properly and he proceeded to sky it over the bar. This example more so the one before is a move that Petković should have instructed more following the success in the second half with this strategy. He should told his side to target Rüdiger as he was once again the main culprit as he tracked Elvedi’s run but dropped way too deep again.

Germany came into this match-up being favourites given their pedigree and had enough quality to perform better than Switzerland despite missing several starters. We have mentioned how Embolo was key for Switzerland in both the build-up but also final third but Germany did not have similar success in these areas.

After Germany were able to beat the press from Switzerland from a goal kick or deep in their half, die Mannschaft lined up in a 2-3-5 formation in the build-up when in the opposition’s half as shown below albeit the two centre-backs are out of frame. Matthias Ginter steps into the midfield with wing-backs Gosens and Kehrer moving into the front five alongside the attacking trio. 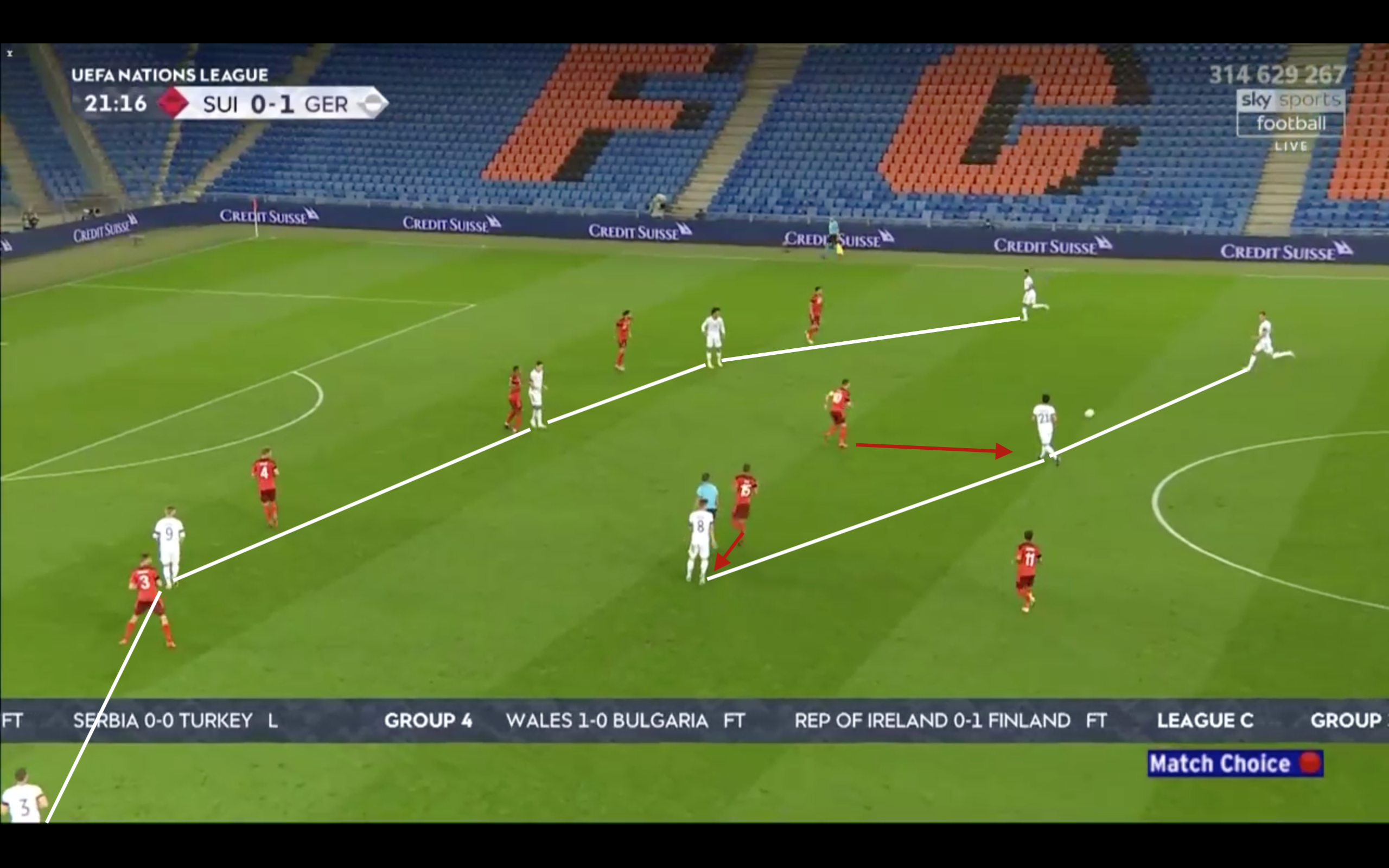 This is a formation that is used by most elite teams in possession in club football and Germany have adopted it with mixed results. Germany anticipated that Switzerland will play in a double pivot so the three in midfield creates a numerical advantage that should have been key for Germany. In theory, this was a great idea as Xhaka and Sow looked to man-mark Germany’s double pivots in Kroos and Gundogan who one of the chief ball progressors in their club sides let alone for Germany. With Ginter’s ability to play in midfield and great ball-playing ability, he was a great fit to occupy the right half-space in midfield. Thus, it should come as little surprise that Ginter was the player who assisted Germany’s only goal. 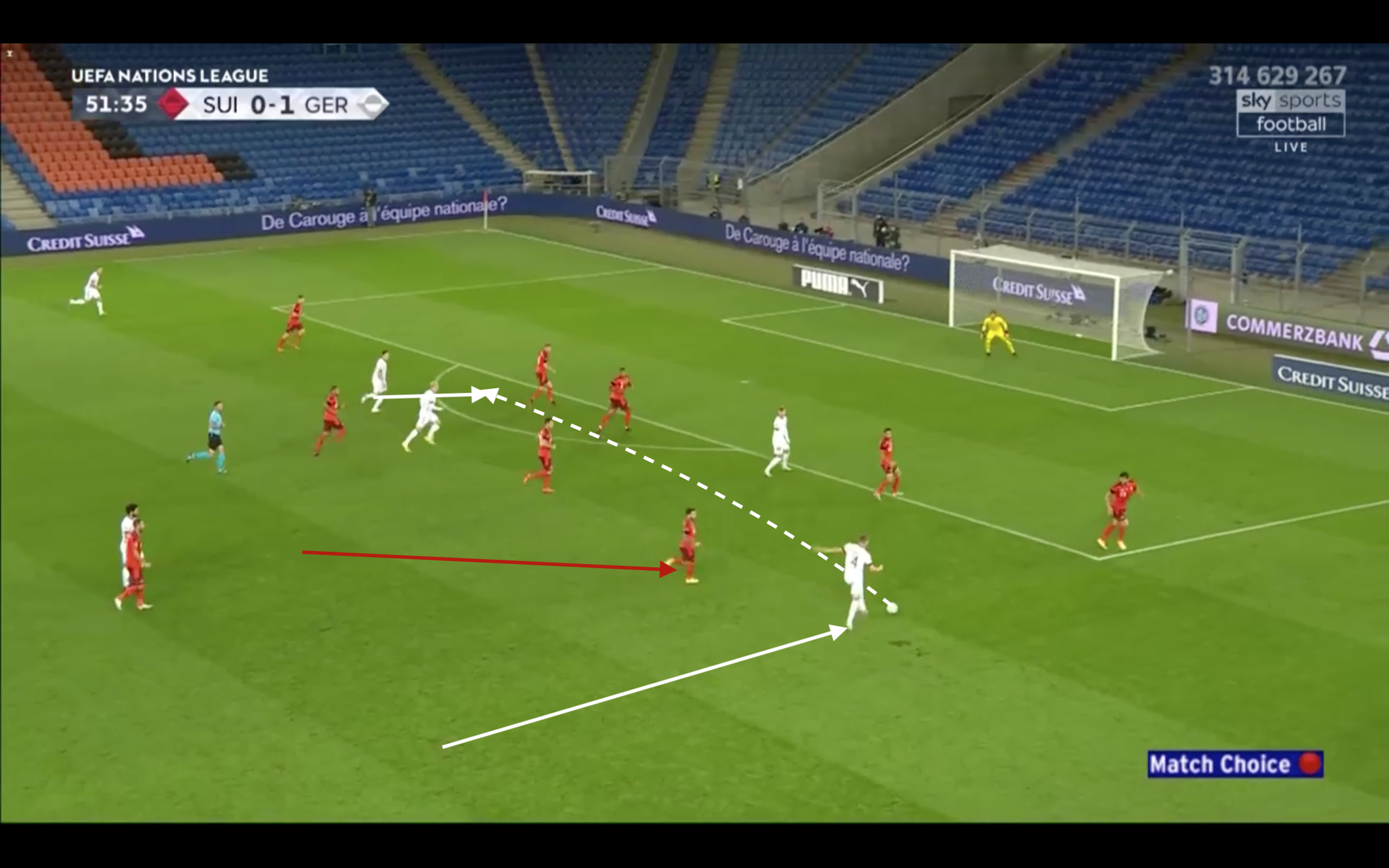 Above is an example of how Ginter proved to be great in possession. After Gundogan invites pressure from Switzerland’s midfield, Ginter is left wide open and Germany take advantage of the numerical advantage, which gives space for Ginter to drive in. Steffen looks to close Ginter, which he had done well all game, but the defender makes a great pass across the pitch to Draxler. The Paris Saint-Germain player takes a touch and has a fantastic opportunity to score but puts it just wide. Ginter made this play a couple of times, especially this cross pitch direct pass, but Germany failed to make the best use of him.

Why was this? The reason is twofold. Firstly, a lot of credit has to go to the aforementioned Steffen as well as the rest of the Switzerland defence as Steffen did great work defensively and Petković’s side did great to have a compact and deep block. However, it was easier to do this as Germany’s structure was compromised given Thilo Kehrer’s positioning. 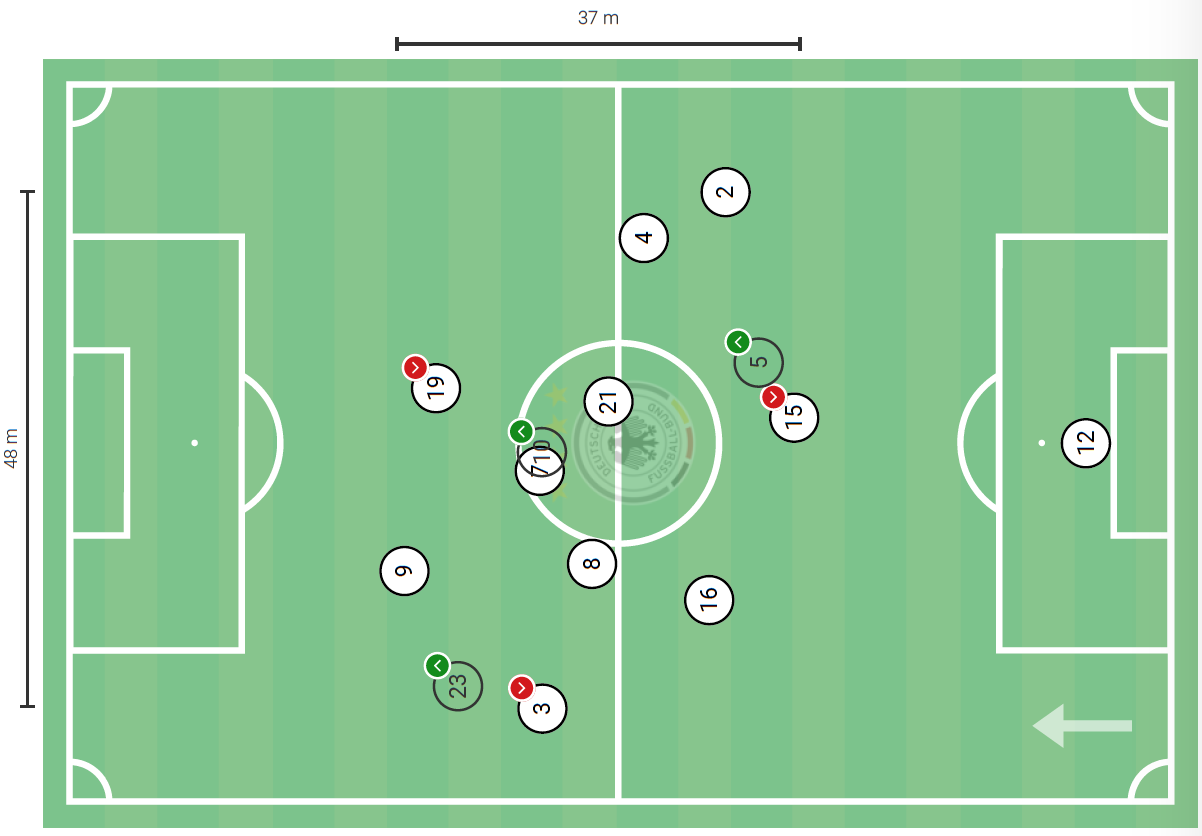 The average position map for Germany shows this very well. Kehrer, the number two, is behind Ginter, number four, despite his role in the build-up being a part of the front five as mentioned earlier. Kehrer is a centre-back by trade and it showed in the game as he was unable to pick up good positions during the build-up play and provided spacing issues, given they were often very close together, in Germany’s structure making it much easier for Switzerland to defend in a deep block. Had Kehrer positioned himself higher throughout the game, it would have given more space for Ginter to create plays from midfield.

In the end, Germany were fortunate enough to escape with a 1-1 draw and have looked unconvincing under Joachim Löw since their World Cup debacle in 2018. Switzerland, on the other hand, bounced back well with a great team performance with Embolo and Xhaka standouts for them.

Die Mannschaft are set to face Turkey next in a friendly and then face Ukraine in what is a must-win game in their UEFA Nations League group given that they are currently third. Switzerland welcome Croatia in their upcoming friendly before facing group leaders Spain in the Nations League.