Only three games into the Belgian Pro League season, KAA Gent decided to part ways with manager Jess Thorup after a difficult start to the season. Despite selling their best player in Jonathan David to Ligue 1 side Lille, Thorup was not given any leeway in terms of performances and results. In his place, Gent turned to former Royal Antwerp manager László Bölöni. This has led to a need to change tact in terms of recruitment, as Bölöni prefers to play a 4-3-3, while Throup used narrow formations without wingers.

Therefore, Bölöni inherited a squad that lacked depth on the wing for him to play his preferred formation. Gent have been linked with former Bundesliga and now second-tier Hannover 96 winger Linton Maina as a result. One confirmed signing for Gent is Osman Bukari from Slovakian side AC Trencin for around €1 million. Despite Trencin ending up in the relegation stages last year, Bukari appears to be an exciting prospect who may be the winger Bölöni needs to fit his system.

This data analysis, in the form of a recruitment analysis, will use a mix of data and stills to look at the strengths of the young winger’s game and what he can bring to Gent. This analysis will look at how Bölöni could use him in his by looking at the statistics.

Goals from the wing

Bukari managed 10 goals last season, which put him third overall for goals in the league. For Gent, they lost one of their main goal threats in Jonathan David, so getting more goals in the side is vital. With Bukari, it appears that they have a winger capable of scoring from wide positions.

When we analyse his goals from the 2019/20 season, we see that he has footballing intelligence in order to get into the right position to provide finishes. He is capable of playing on either wing, but prefers to use his right foot when it comes to finishing. This means that, when he is out wide on the left, he is looking to cut inside and shoot.

Looking at his movement, we see him below in the game against Zemplin Michalovce, operating on the left wing. He had operated on the right wing as well during this game. In this position, there are plenty of options for Bukari; one is to continue running in a straight line to the back post, creating space for the other Trencin players alongside him to move into the central areas. This would also limit his scoring opportunity though, as getting the ball to the back post would be difficult for the ball carrier. 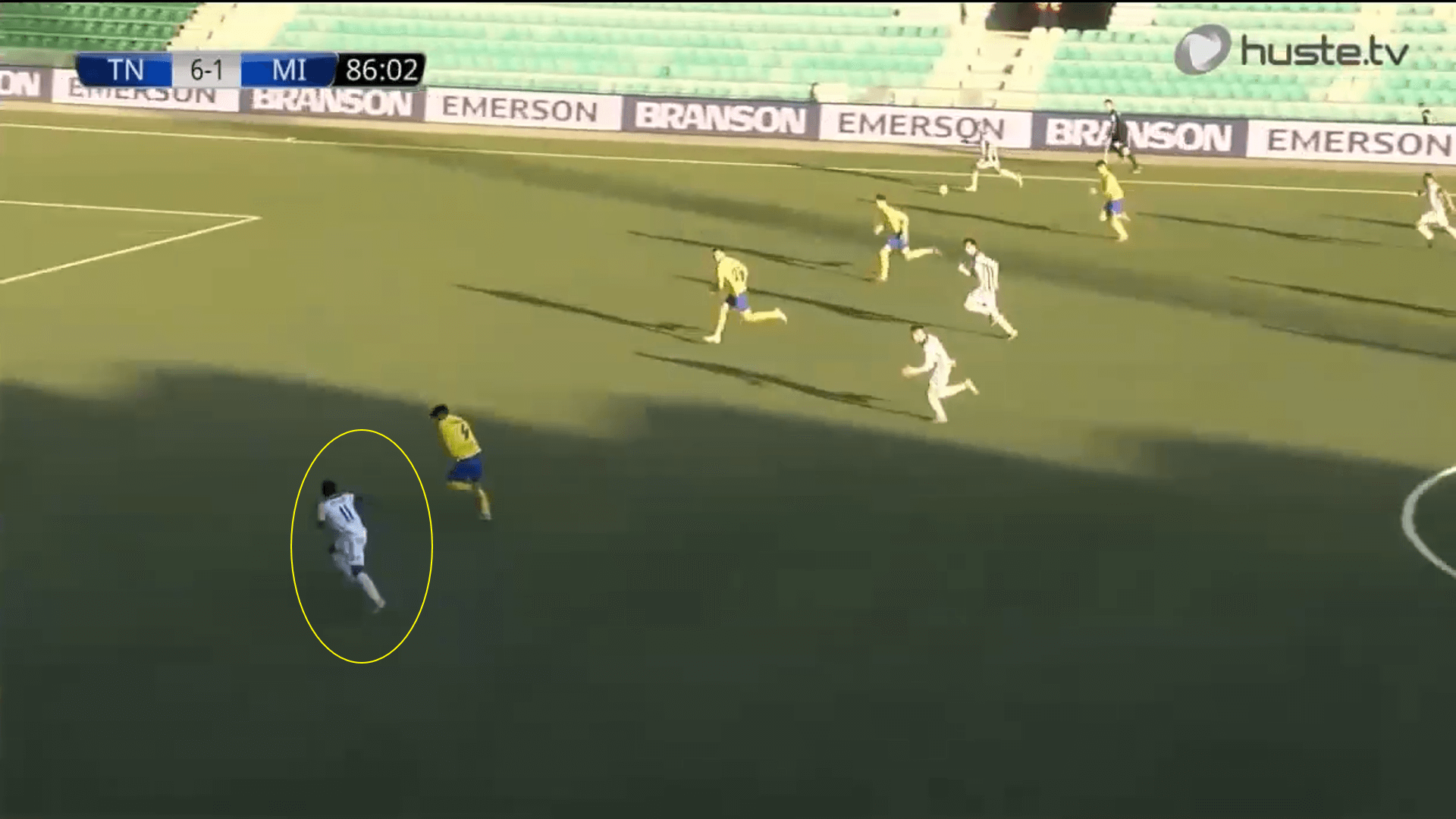 Yet, Bukari is clearly the fastest of the Trencin attackers, and therefore can get into the more dangerous central areas before his teammates. We see his footballing intelligence here, in that he runs across the defender, like most strikers like to do, taking them out of the action, and putting himself in the perfect place to finish off the play. 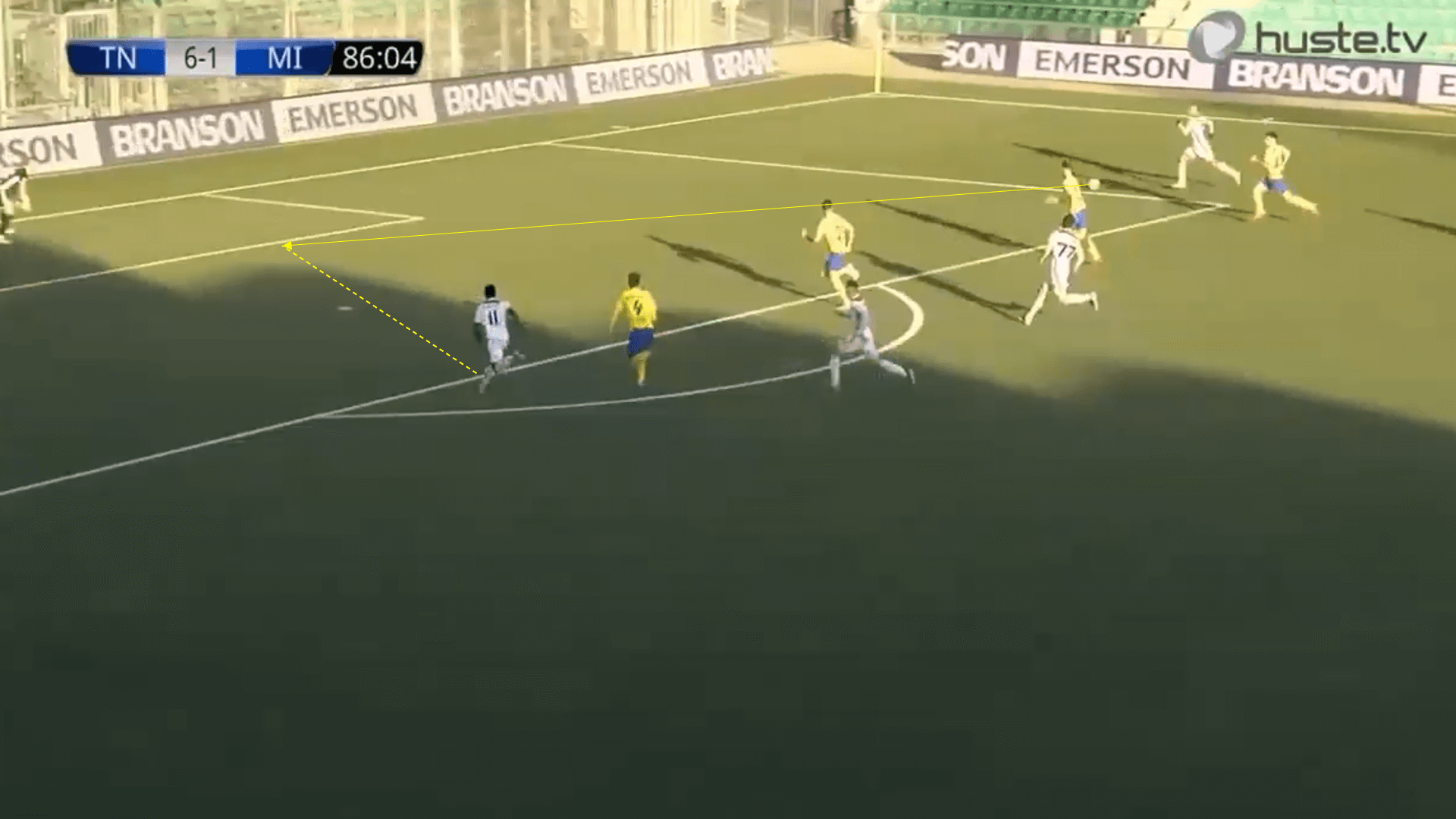 For Bölöni, this would suit his preferred play. Last year with Antwerp, his side averaged only 48% possession, looking to hit teams on the counterattack and be more direct. With Bukari’s ability to get into good positions and finish off counter attacks, one would presume that the manager will enjoy using him as a wide option. However, Gent sat second overall in terms of possession, with 57.1% of the ball. Therefore, Bölöni may not be able to completely change the system just by bringing in players like Bukari.

Not all of the winger’s goals last season were on the counter, so it would be wrong to consider him as just a counter attacking threat. For example, in the 2020/21 season, he is currently averaging 6.79 touches in the penalty area; the best in the league. His goals came from finishing off moves or beating players with his dribbling and speed. Bölöni will more than likely enjoy Bukari’s versatility in being able to play on either wing and get goals from both flanks.

Bukari is not just a goalscorer, but also a provider. Last season, David scored 18 goals, but also provided the side with seven assists. Bukari managed six assists last season and already has one to start the new Fortuna Liga season. As mentioned earlier, he is predominantly right footed, so, when it comes to crossing from the left-hand side, he looks to cut inside in order to cross the ball.

In the same game against Zemplin Michalovce, we see Bukari with the ball in plenty of space on the left flank. If he was stronger on his left foot, he could drive further towards the by-line, drawing defenders out to create more space in the middle, where we see another Trencin player could exploit it. 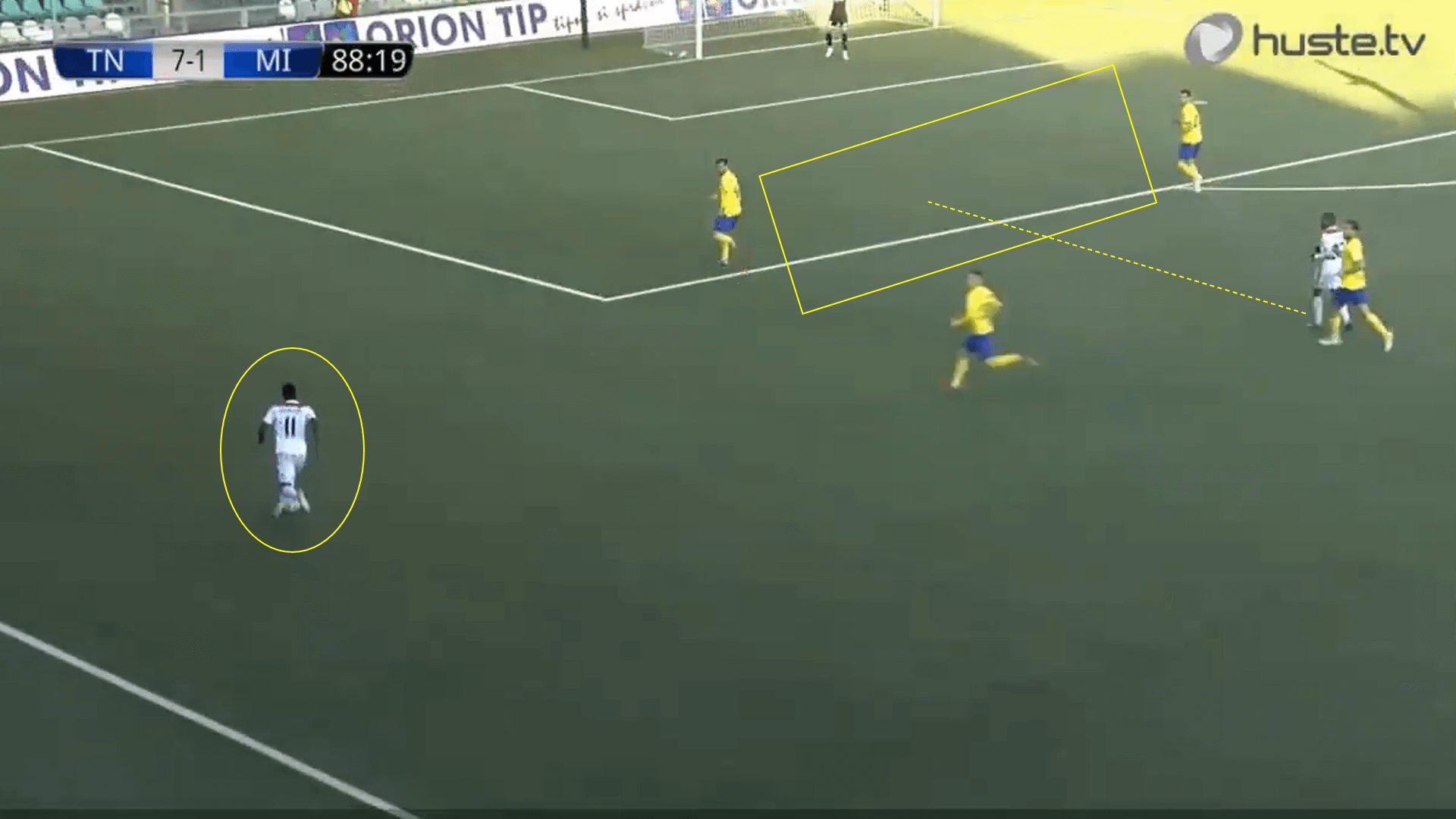 Instead, Bukari cuts back in onto his right foot and looks to cross the ball. While taking it down the line and drawing out defenders may have been the better option, Bukari can trust his crossing ability. Even in the 2020/21 season, he is averaging 47.37% accuracy on 6.45 crosses per 90, putting him in the top three for his position so far. In addition, he leads the league this season when it comes to key passes, with 3.06 per 90.

Back to the game, we see his crossing ability here, as his cross is perfectly weighted and flighted to find the Trencin player at the back post in between the two defenders. For opponents, when Bukari is on the left-hand side of the pitch, they would do well to show him down the line, forcing him into having to use his left foot instead of his stronger right. Allowing him to cut inside and cross is too dangerous and will lead to plenty of chances for his side. 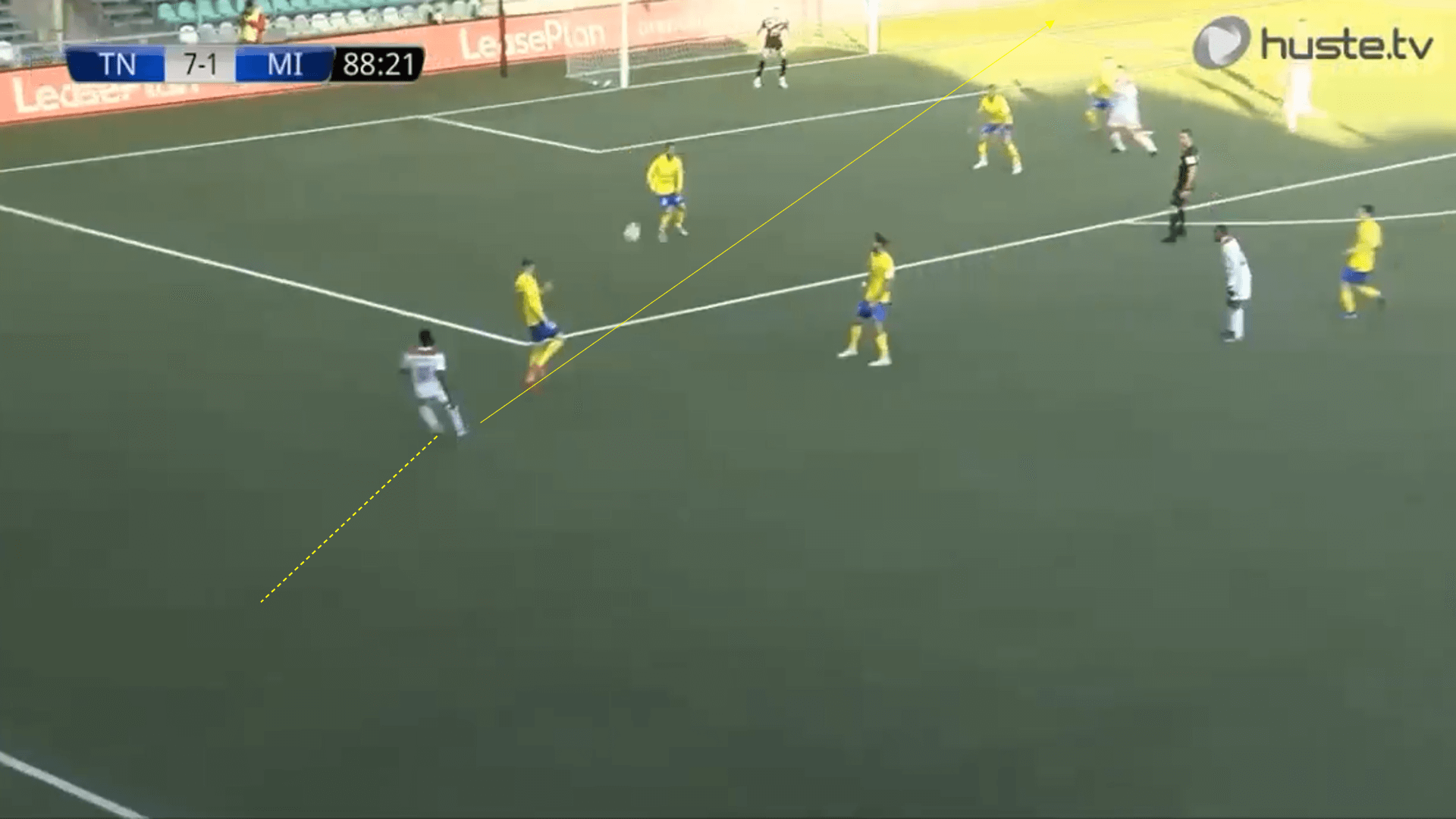 As we see in the final image below, it was a simple chance for the attacker, due to the perfect placement of the cross. Gent will certainly be hoping to see more of this during the 2020/21 season. 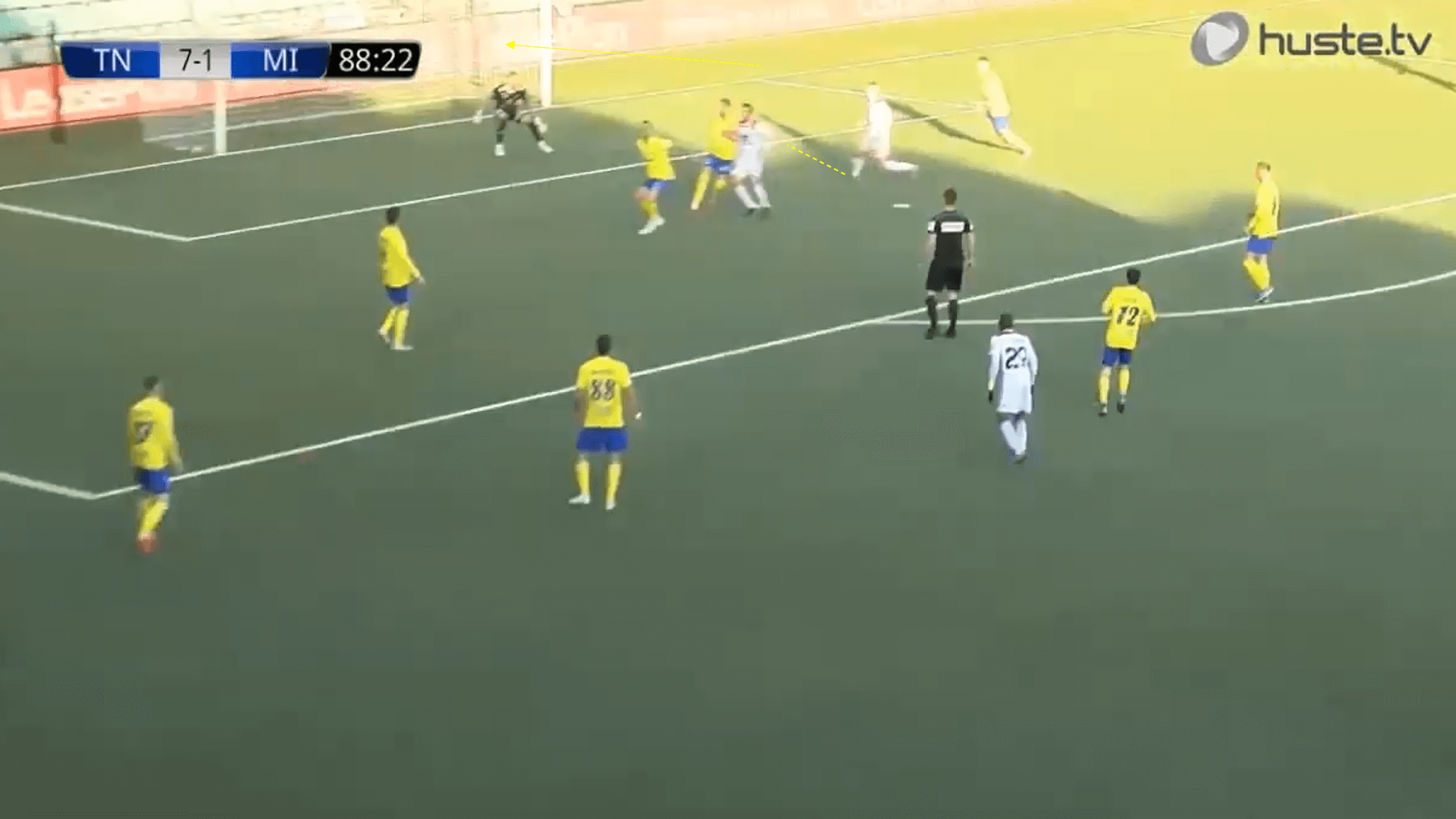 For Bukari, if he can strengthen his ability to cut inside or carry on down the line when playing wide left, he will open up even more chances for himself and his side. Gent will certainly be looking to strengthen this aspect of the Ghanaian’s game. Furthermore, Gent have strikers like Laurent Depoitre, Tim Kleindienst and Roman Yaremchuk, who are all tall and decent in the air. Having someone like Bukari able to cross with accuracy will certainly work in their favour, giving them more chances in the box.

Data and the eye test indicate that Bukari is a strong runner with the ball. So far this season, he leads the league in dribbles per 90, with 13.92 and a 66% success rate on them. Furthermore, he is averaging 8.83 progressive runs per 90. Therefore, if Gent revert to a more counter-attacking style of play, rather than possession-based, then Bukari’s ability to transition from defence to attack will certainly be an asset. Even if they remain committed to the possession game, Bukari should still be able to contribute in progression of the ball. The numbers he has put up so far this season come from Trencin averaging 54.5% possession.

We see an example of this in his goal against Spartak Trnava, where he picks up the ball just inside the opposition’s half. Prior to him receiving the ball, Trencin have played it out from the goalkeeper. The only passing option on for Bukari is behind him; however, with his speed and dribbling ability, there is very little chance of him giving up the ball. 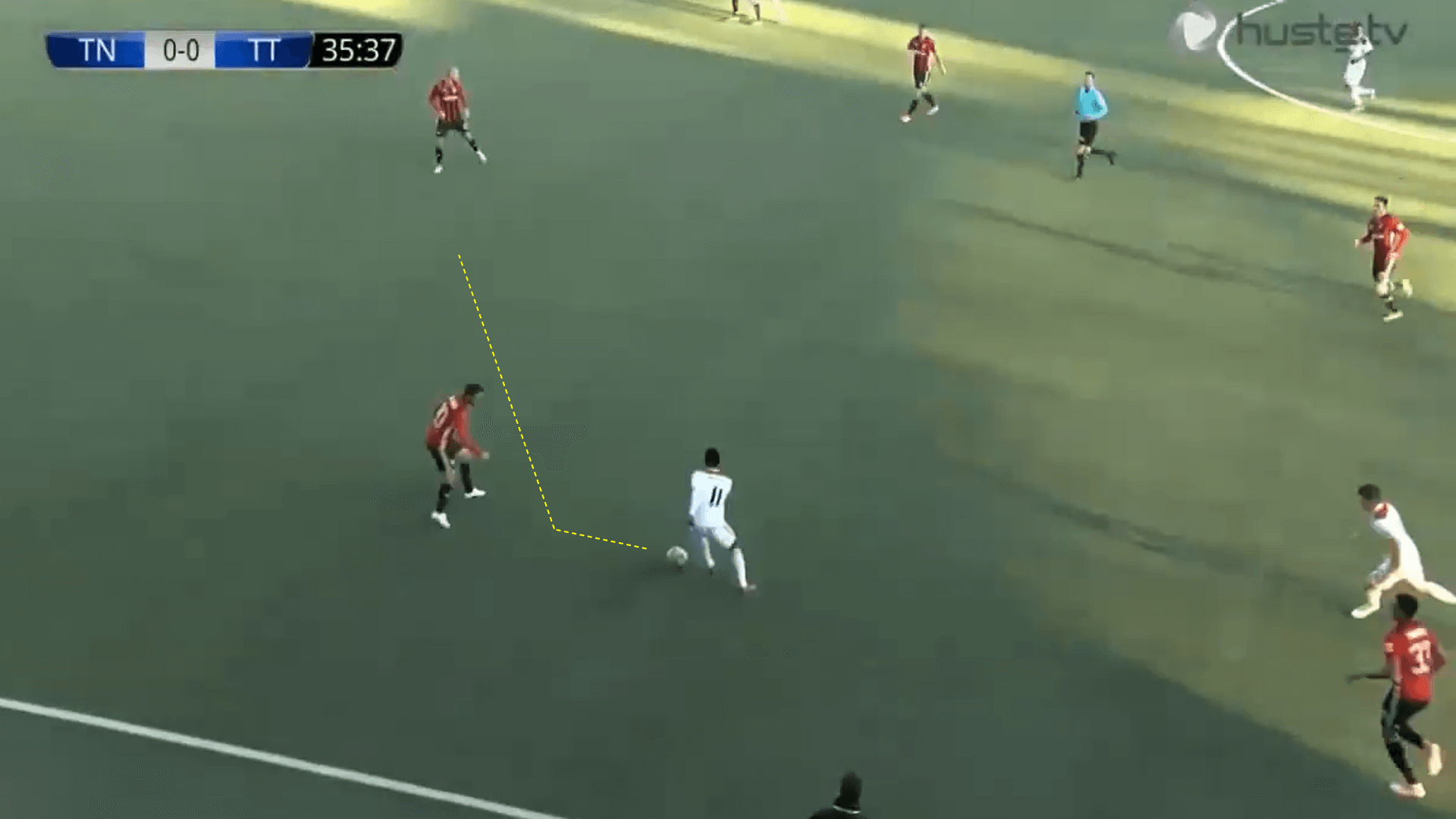 Bukari, like with his crossing, wants to come inside so that he can use his right foot. He is able to take advantage of his teammate looking for the overlap, as this opens up more space inside to burst into. We see how his instant acceleration takes him past the immediate defender, and he approaches a one on one with the centre back. Nearly all centre backs talk of how they dislike it when they have a player dribbling at them. 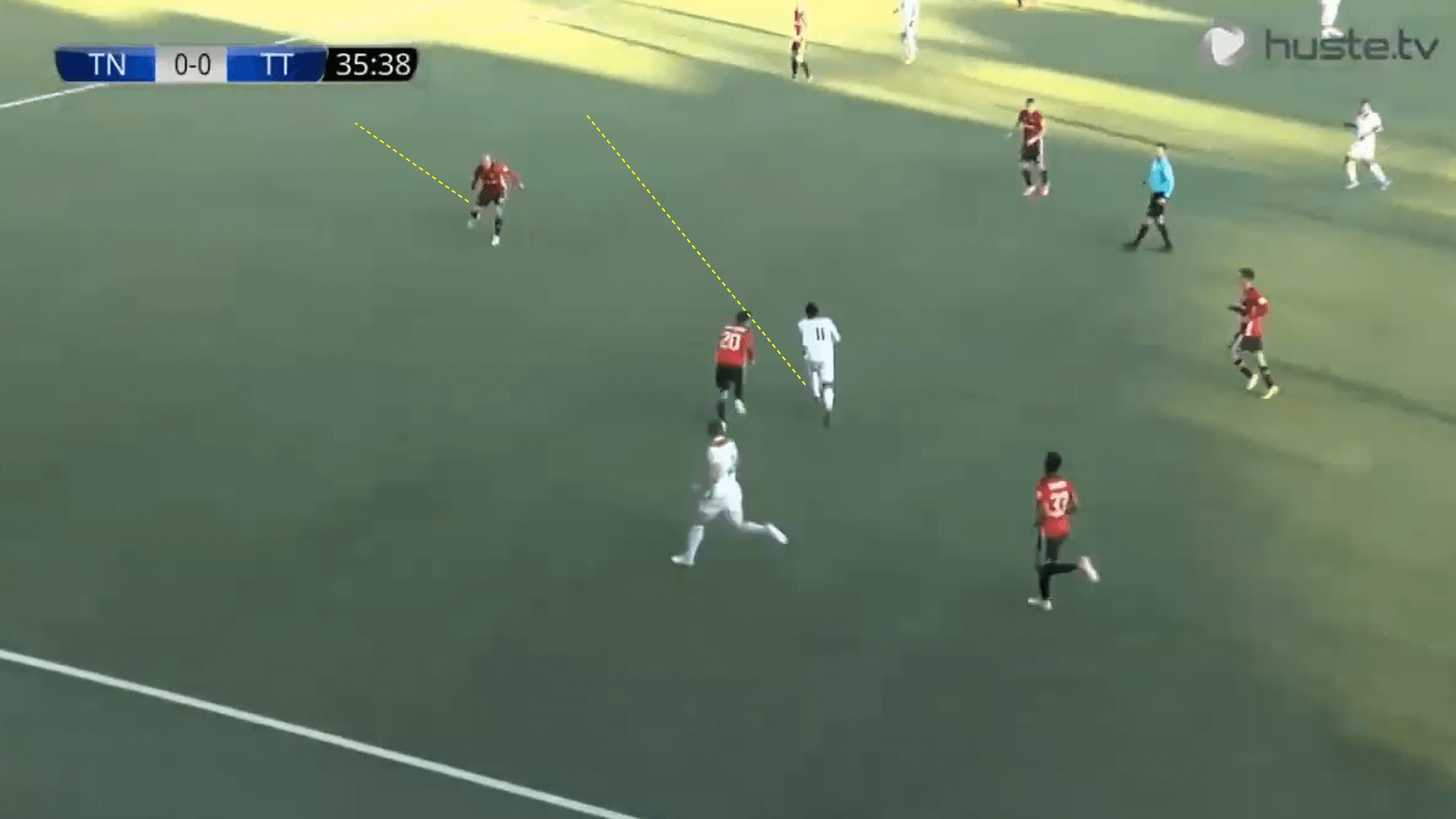 Bukari is able to feint the defender, making him think he is looking to go past him on Bukari’s left hand side. Instead, as we now know he prefers to do, he goes on the right hand side. This feint gives him enough time to open up the space he needs to drive into and get a shot away. 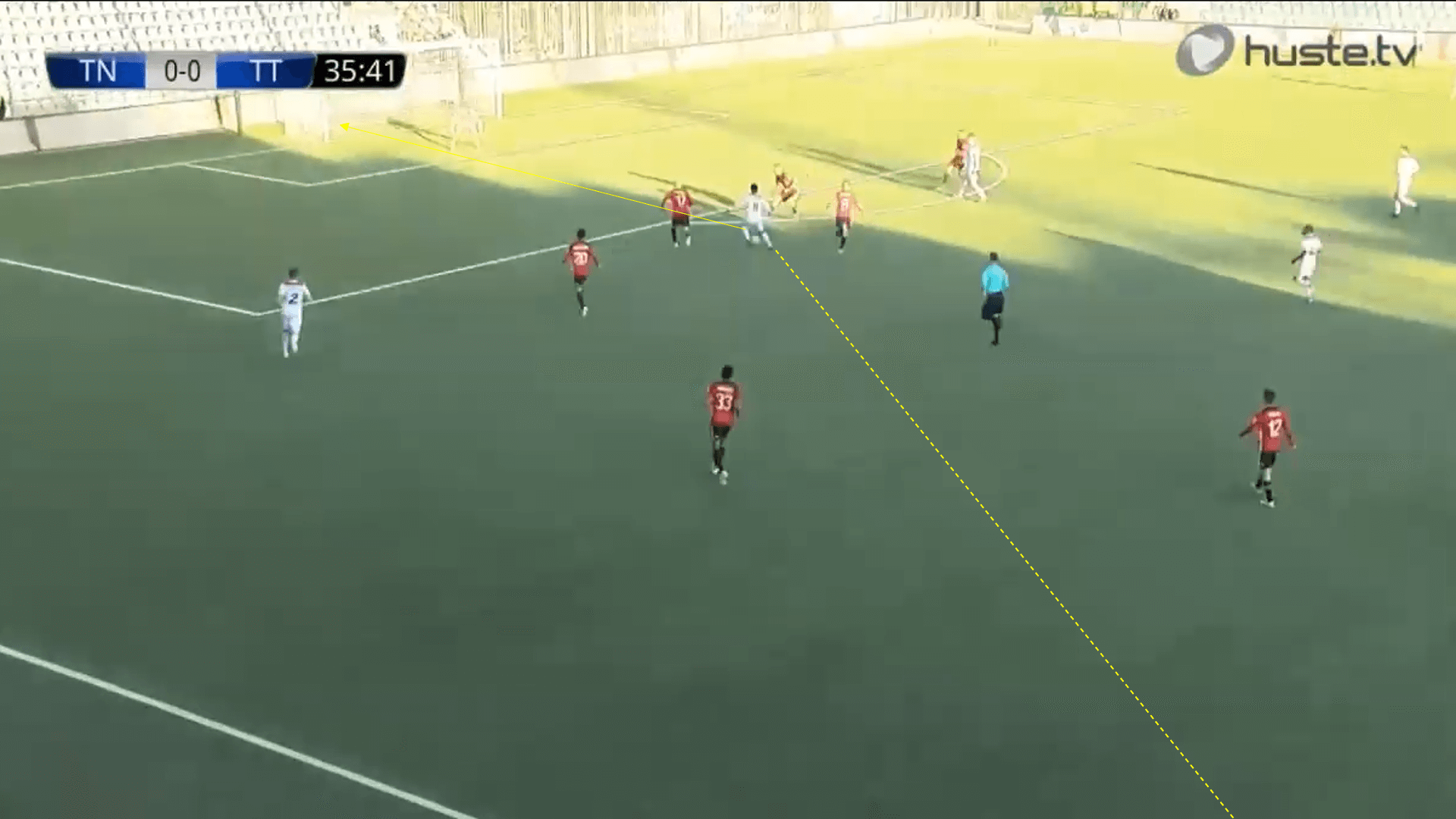 When we look at the position Bukari ends up in, we can appreciate how he has progressed the ball all the way from just inside the opposition’s half to the edge of the box, despite a number of defenders being around him. In a stronger league like Belgium, we would expect these chances to be limited for Bukari; yet, speed and acceleration do not become irrelevant because of the level of competition. This ability to go past players will certainly be an asset to Gent.

When we look at the cost, it is hard to argue that this is a no-risk piece of business from Gent. At only 21 years of age, Bukari is hardly coming in as the finished article. Belgium as a league is known for developing young talent, so it is an ideal move for the young winger. His performances and stats at Trencin suggest that he has what it takes to be an effective wide man for Gent.

With Bölöni more than likely wanting to bring in even more wingers so he can play a system he prefers, not overspending on a player like Bukari seems very good business. If they add Maina from Hannover, who will certainly cost more, the pressure on Bukari to perform will lessen, allowing him to develop without the expectations generated by a large transfer fee.