Gwangju FC had an eventful night on 30th August when they beat Daegu FC 6-4. A tougher test was looming onto them as they had to face Ulsan Hyundai on the Horangi’s home turf. Ulsan Hyundai too had a not so worrying win against FC Seoul the previous weekend.

This K-League 1 fixture did not produce a flurry of goals as the last game Gwangju played. A 1-1 result was not what both the team would have wanted as both the teams have different ambitions for this season.

This tactical analysis will dive into the tactics of both the managers and the intricacies of the game. This analysis will also discuss the effect of Bjørn Johnsen’s introduction.

Kim Do-hoon started with his tried and tested 4-1-4-1 formation and made few changes to the line-up from the previous week. Kim has a plethora of options, especially in the midfield, and has two quality left-backs at his disposal. He constantly looks to rotate in these positions. However, against Gwangju, Kim had to make a forced substitution due to Ko Myong-jin missing out due to a minor injury. He was replaced by Yoon Bit-garam. Jung Seung-hyun too returned to the line-up after his suspension last weekend. The only other change was Lee Sang-Heon in place of Park Jeong-in. 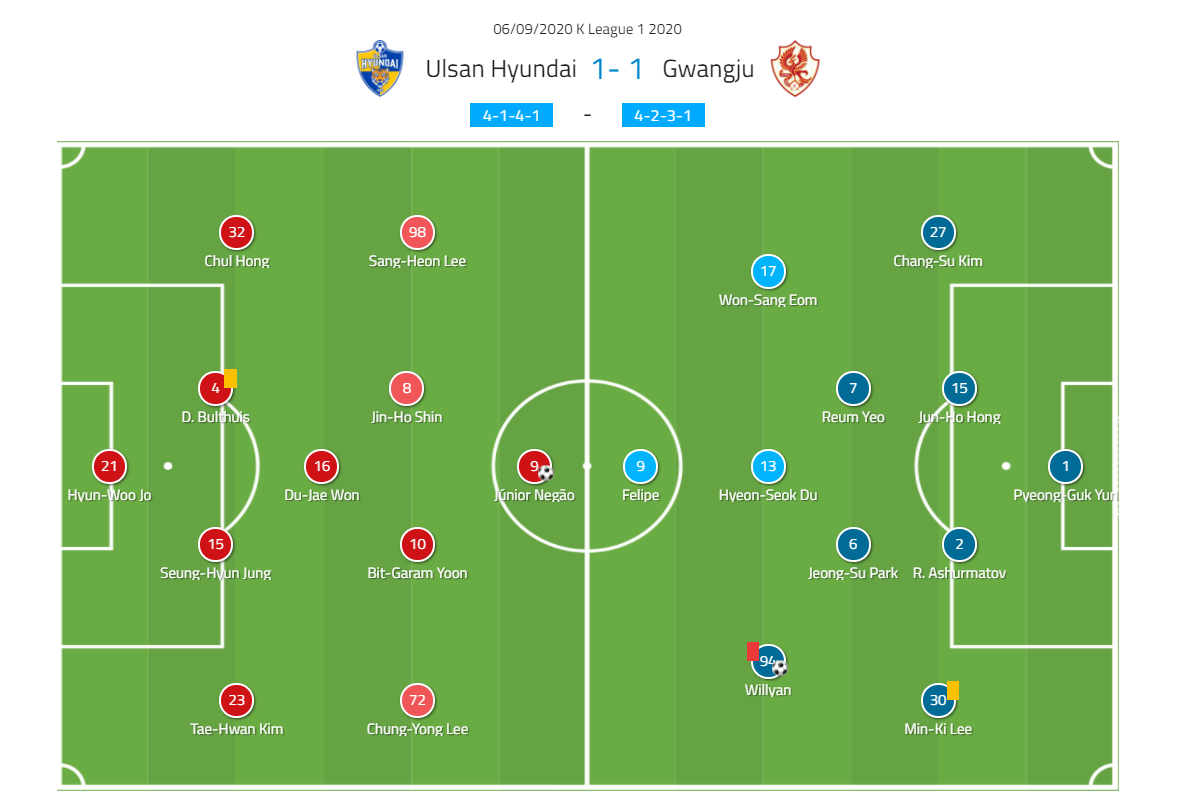 Park Jin-Seop used a variety of formations this season but all are basically the same moulds of each other. Against Ulsan, the Gwangju gaffer preferred 4-2-3-1. However, he made only one change to his line-up that played against Daegu. Yeo Reum replaced Bong-Hun Yeo in the midfield.

Ulsan out of possession and Gwangju’s build-up 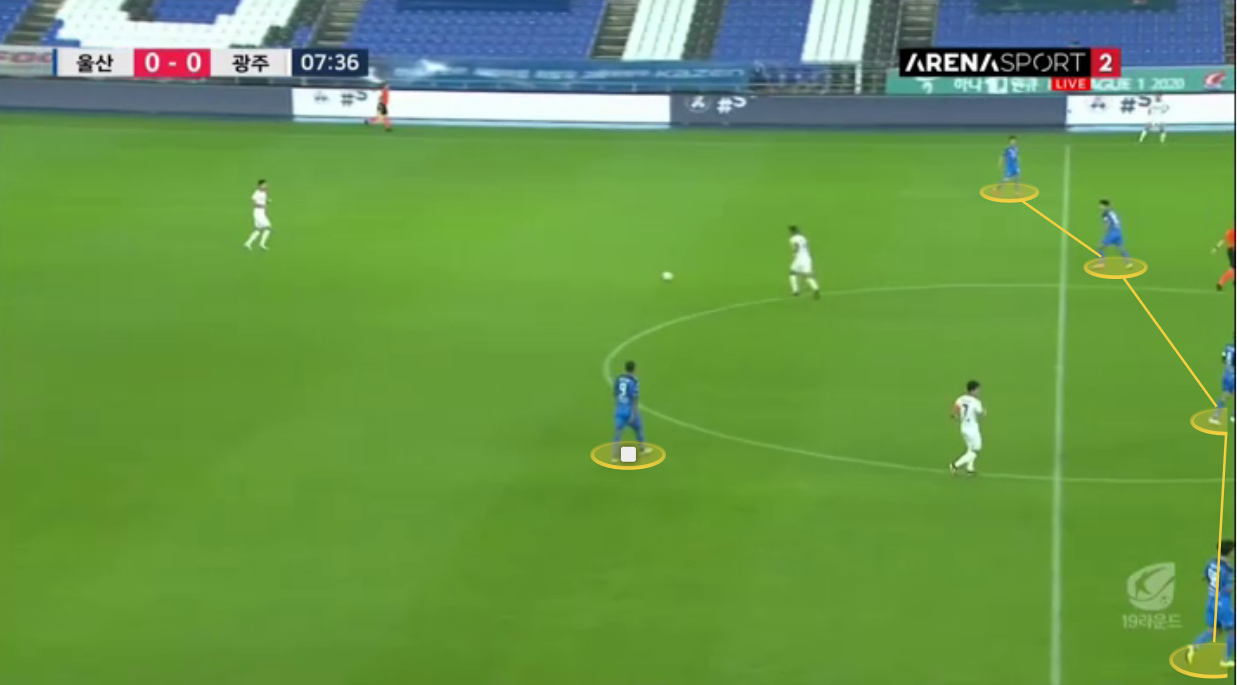 As you can see in the above image, Yoon Bit-garam (RCM) is ready to step out of the line and prevent the opposition midfielder from entering into his zone freely.

The best way to exploit the space-oriented man marking approach is numerically overloading an individual opponent. 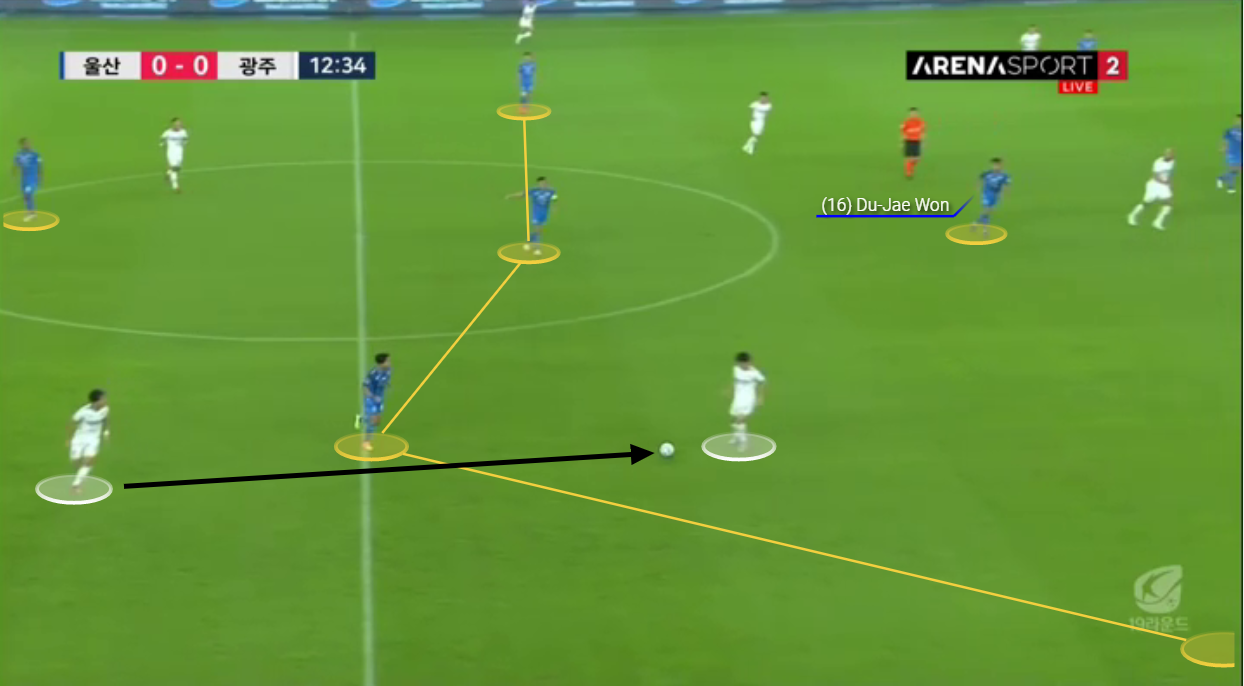 The above image clearly indicates the overloading of the zone Yoon (LCM in this shot) was covering. Reum (RCM) was trying to get into the zone Yoon was protecting. So, Yoon moved up trying to prevent Reum from entering his zone. When Yoon moved up Eom Won-sang (RW) dropped deep and overloaded Yoon along with Reum.

Generally, to exploit Ulsan’s 4-1-4-1 mid block, Gwangju would build-up in a 2-2-5-1 looking formation with the left-back and right-back joining the wingers and the attacking midfielder.

So, the left-back of Ulsan wasn’t able to follow the right-winger in the previous situation as he was in a conundrum whether to follow his player or protect his zone. Even the left-winger of Ulsan couldn’t track Eom’s movement as he was supposed to mark the Gwangju right-back in his zone.

Other than this short build-up, Gwangju generally opted to go with long balls from the goalkeeper. The basic idea was to utilise the height of Felipe (CF). Yun Pyeong-gook (GK) would normally play a long ball to the area Won Du-jae was covering. The 6’4” striker would drop deeper to win the easy aerial duels owing to his height and the three other attacking players of Gwangju would position themselves in between the lines or with the last line of Ulsan’s defence. 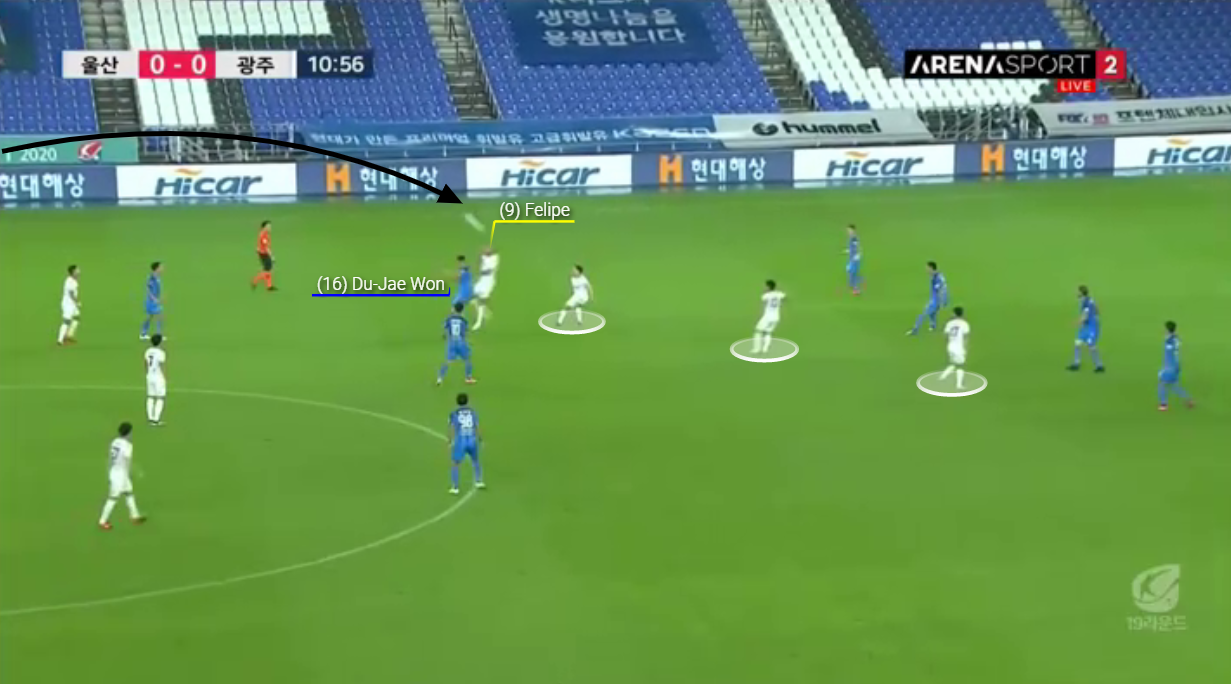 However, after Felipe winning three out of three such aerial battles in the first 30 minutes, Ulsan came out with a better strategy to not lose the aerial battles to Felipe. 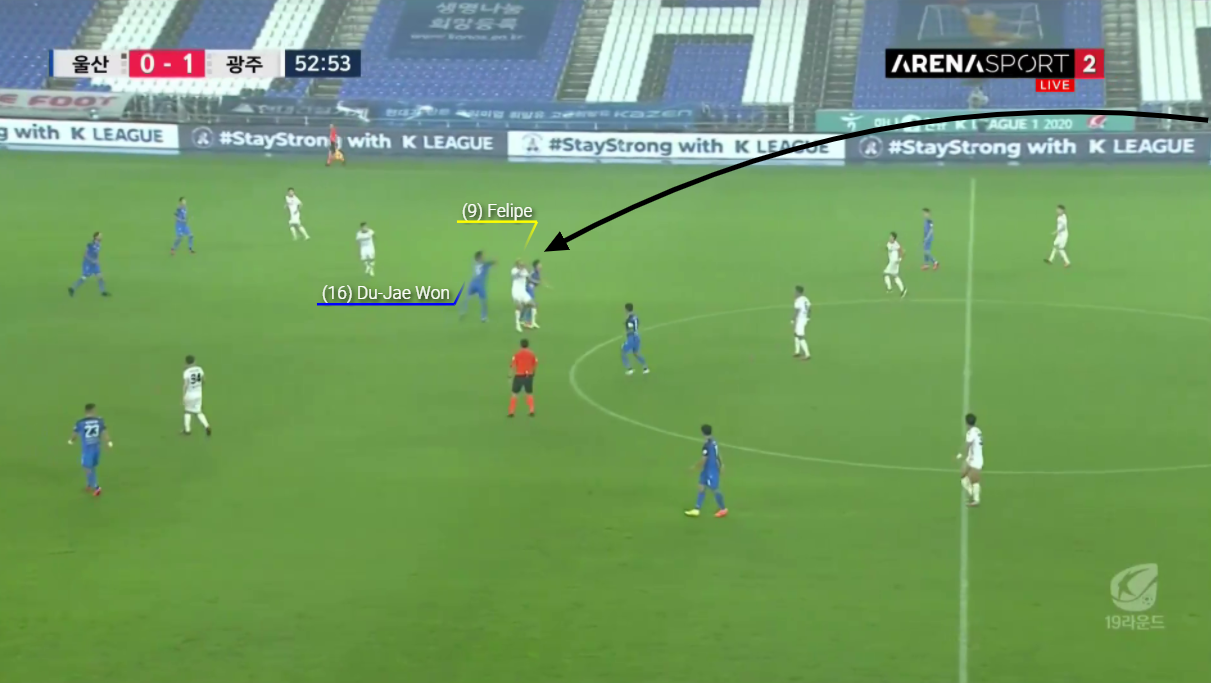 Whenever a long ball was played by the goalkeeper either Dave Bulthuis would move up and vie for the aerial duel or a midfielder along with Won would double up on Felipe as shown in the image above.

Gwangju out of possession and Ulsan’s build-up

Gwangju too adopted the space-oriented man marking approach but defended in a 4-2-3-1 low block. 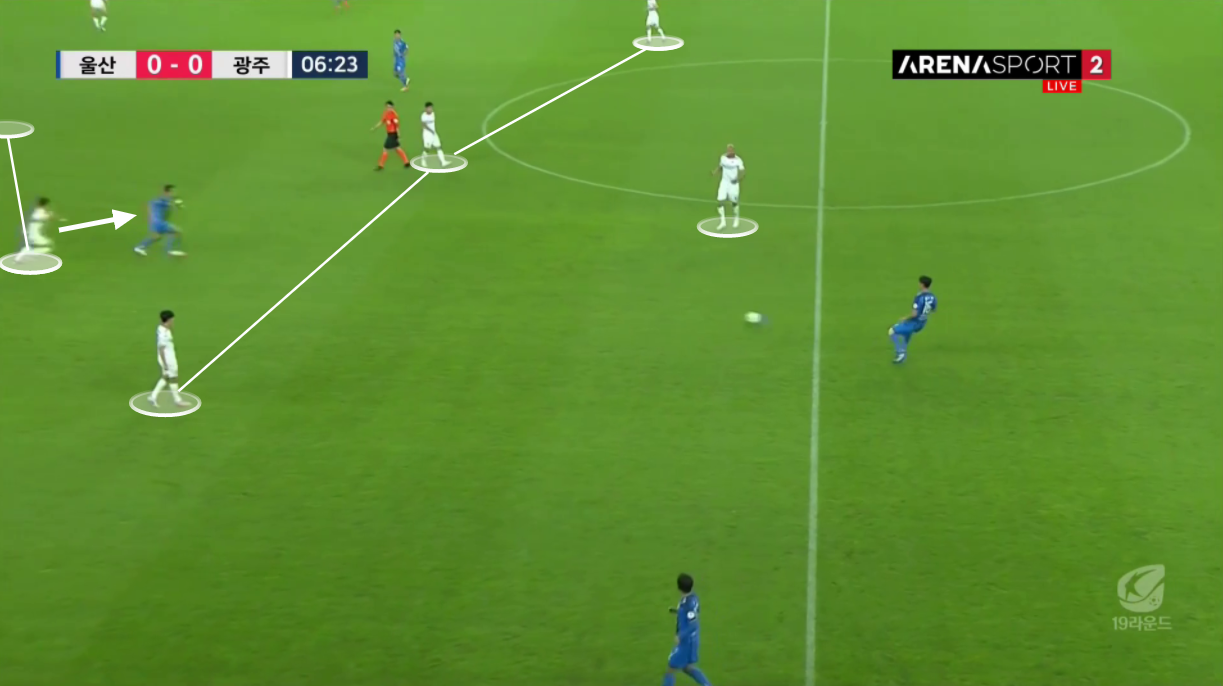 A similar space-oriented man marking can be seen in the image above with Reum (RCM) moving up to mark Shin Jin-ho in his zone.

To counter Gwangju’s low block, often the centre-backs would carry the ball almost to the final third. 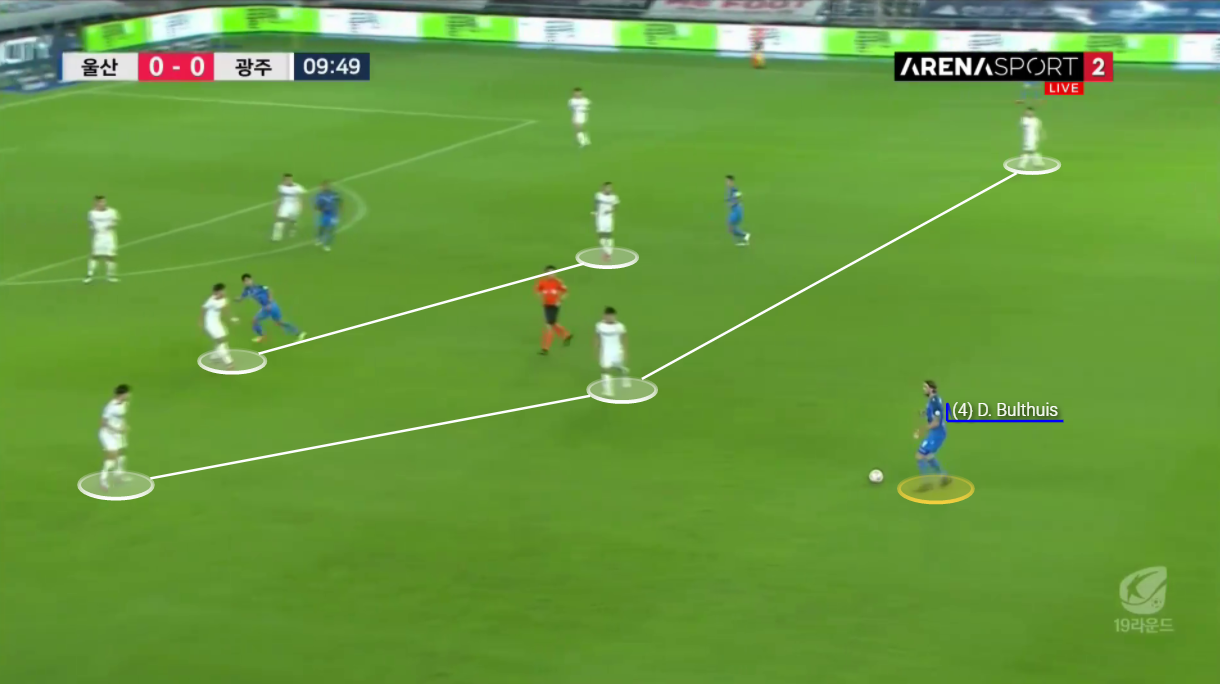 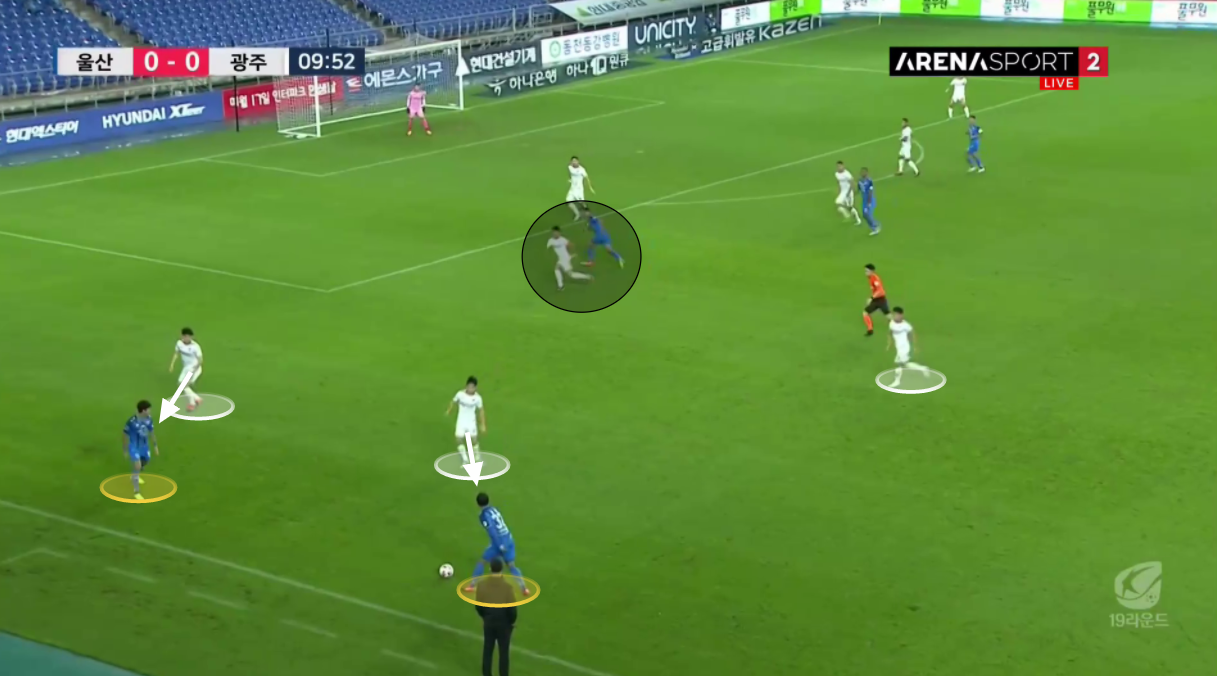 The flank would mostly be underloaded as seen in the above image and the winger or wing-back has to pass the ball backward.

This was the story of the match in the early minutes. However, after a few minutes, the Horangi started to attack from the central corridors. Ulsan too like Gwangju pushed their full-backs high especially the right-back and the wingers would either invert to the half spaces or overload the wings. 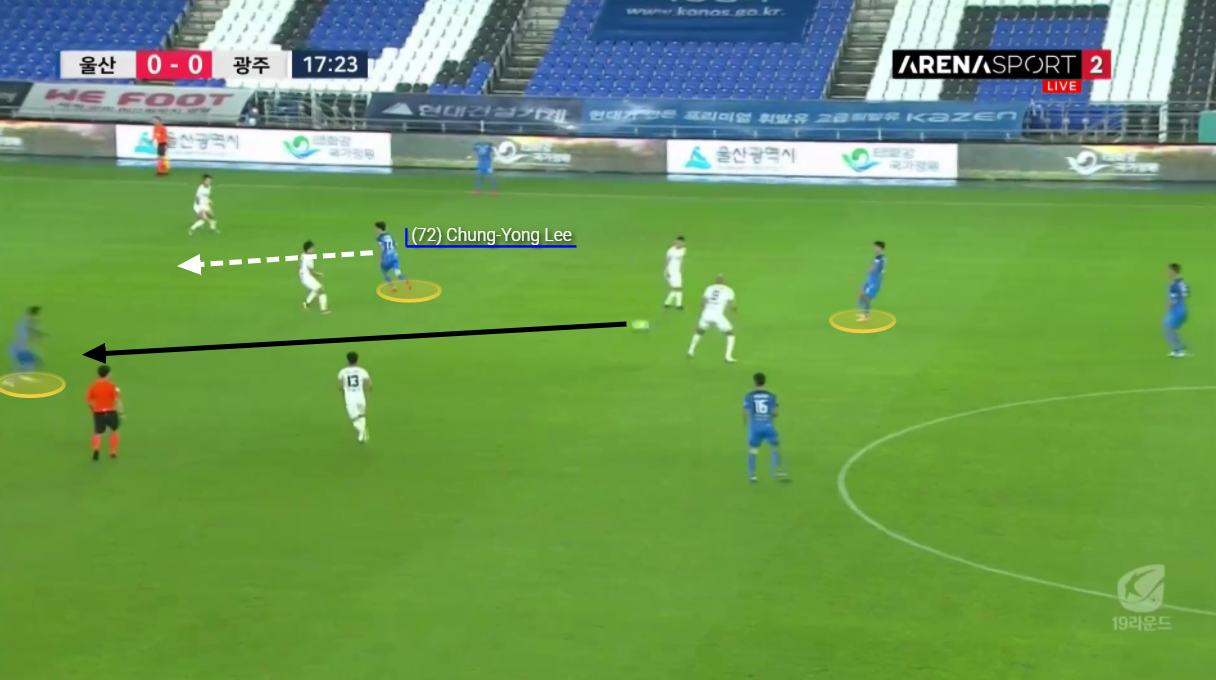 As you can see here, Lee Chung-yong (RW) (former Bolton Wanderers and Crystal Palace winger) inverts into the half space and engages Park Jeong-Su (LCM) and drags him away from his zone for his dropping teammate to occupy the zone and exploit it.

The aftereffect of introduction of Bjørn Johnsen

With Ulsan trailing, the home team brought on Bjørn Johnsen, the 6’5” striker and the changed the formation to 4-2-3-1 which in possession would become 4-4-2.

To counter Ulsan’s change in formation, Park Jin-Seop too tweaked his formation. He changed to a back five dropping Park Jeong-su (LCM) to the backline and instructed Rushtamjon Ashurmatov (LCB) to man-mark Júnior Negrao.

However, the move backfired. As you can see in the image below, Ashurmatov’s body orientation is too concentrated on blocking Negrao rather than looking at the cross. A fraction of second Ashurmatov takes to look at the cross, Negrao is away from him and scores from within the six-yard box. 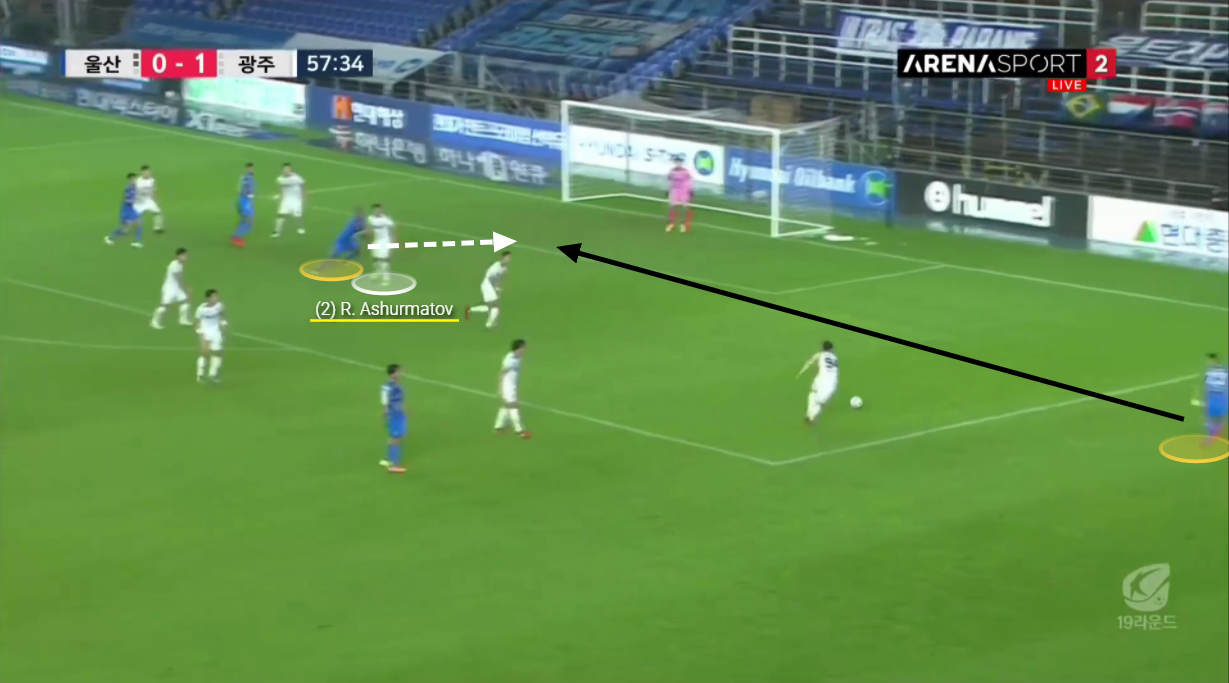 The other method Kim Do-hoon devised was to use Negrao as a dummy. As Negrao was followed everywhere, the Brazilian would initially occupy a space and then vacate it for his teammate to exploit dragging away the Gwangju centre-back along with him. 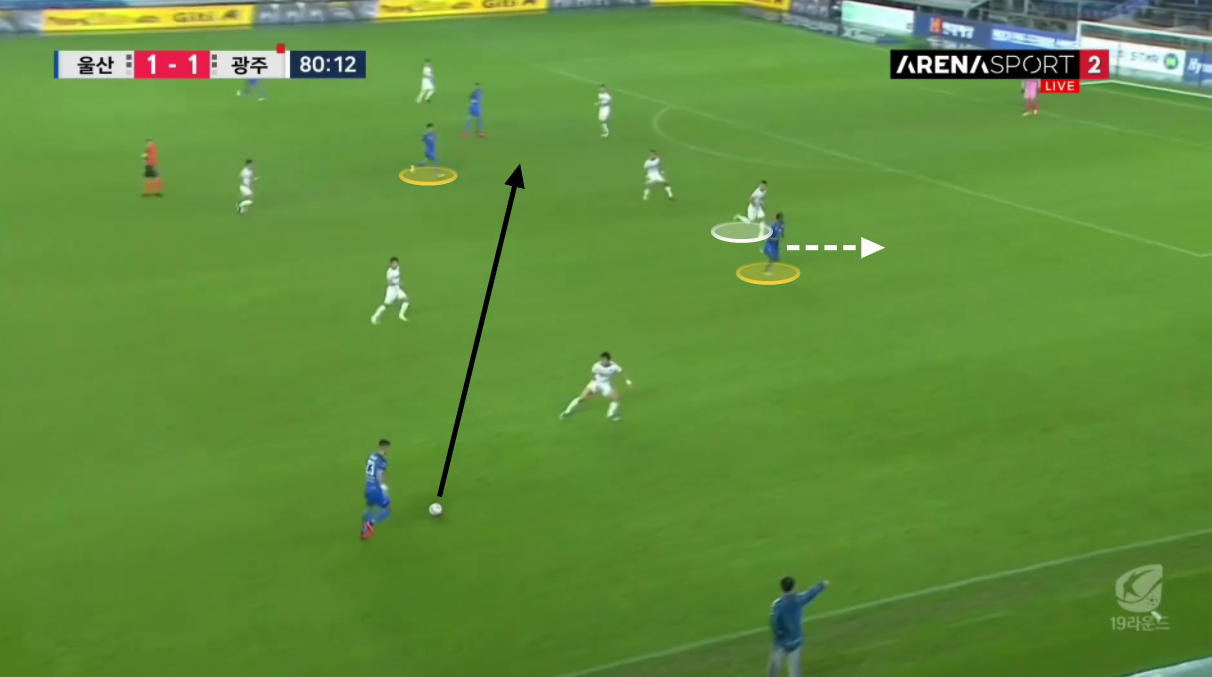 A draw might not be a fair result for Ulsan but the Horangi still leads the table by five points. Gwangju accumulated seven points from the last five matches which were supposed to be a very tough run of fixtures and are set to face the second-placed Jeonbuk Motors the next game. Gwangju would be confident with their form and Ulsan would expect Gwangju to trouble the reigning champions and help them in increasing the point gap from their direct rivals.