The 31st game week of the 2021-22 Bundesliga season saw historic rivals Bayern Munich and Borussia Dortmund face off in a vital clash at the Allianz Arena – a game which was pretty much a title-deciding one. Both teams came into this match on the back of an impressive performance in their last game – especially Borussia Dortmund who won 6-1 against Wolfsburg.

Bayern Munich won the game and hence clinched their record 32nd Bundesliga title and a 10th consecutive one.

This tactical analysis features how Bayern and Nagelsmann masterminded a victory with their tactics against Marco Rose’s men. Let’s begin the analysis.

Bayern Munich made two changes to the lineup that beat Arminia in their last game week with Kingsley Coman and Lucas Hernandez coming into the team in place of Marcelo Sabitzer and Tanguy Nianzou respectively. 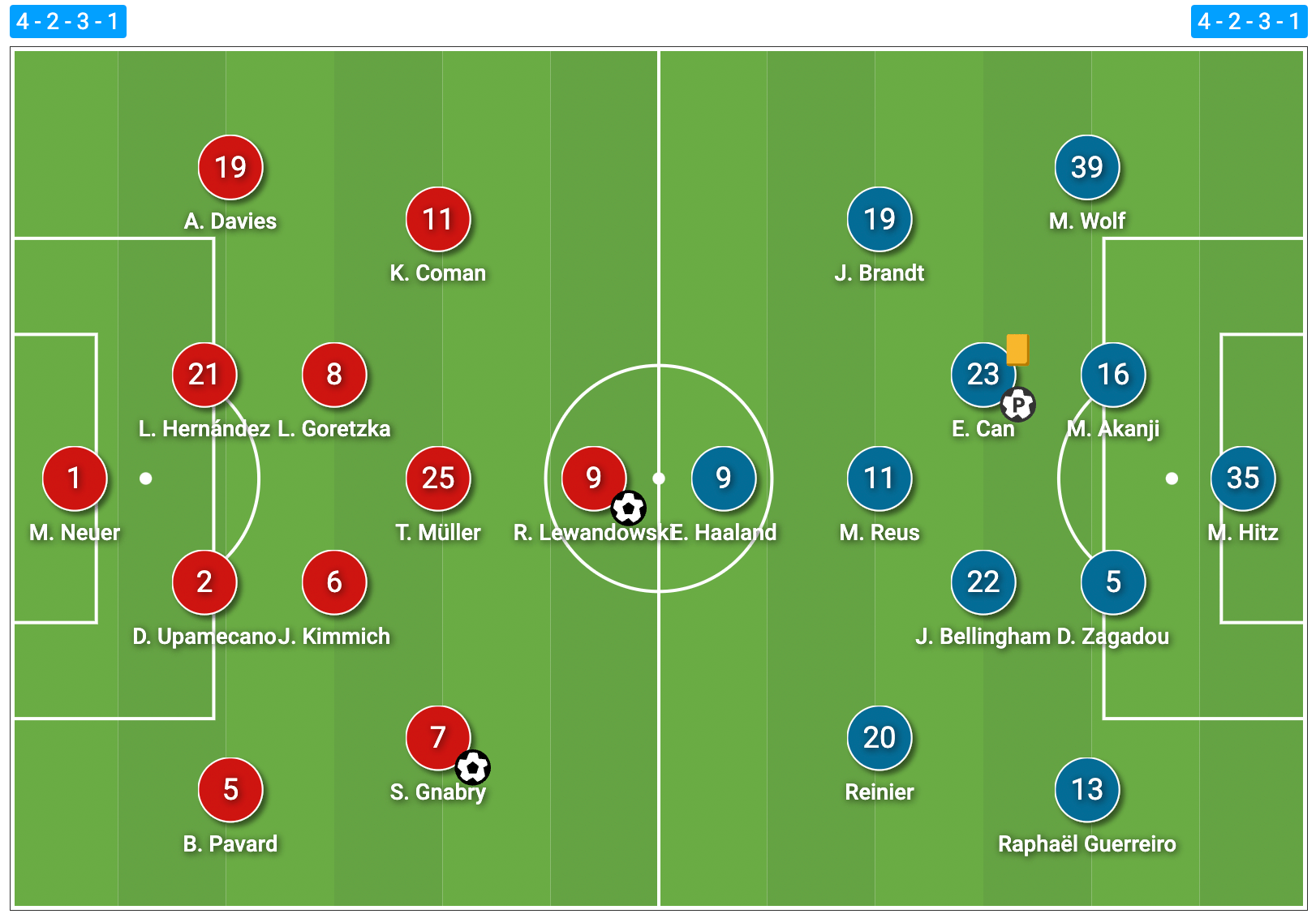 Dortmund, on the other hand, made three changes to the lineup that thrashed Wolfsburg 6-1 with Hitz, Guerreiro and Reiner coming into the lineup for Kobel, Witsel and Rothe respectively as Marco Rose went back to a 4-2-3-1 system.

Bayern’s strategies out of possession 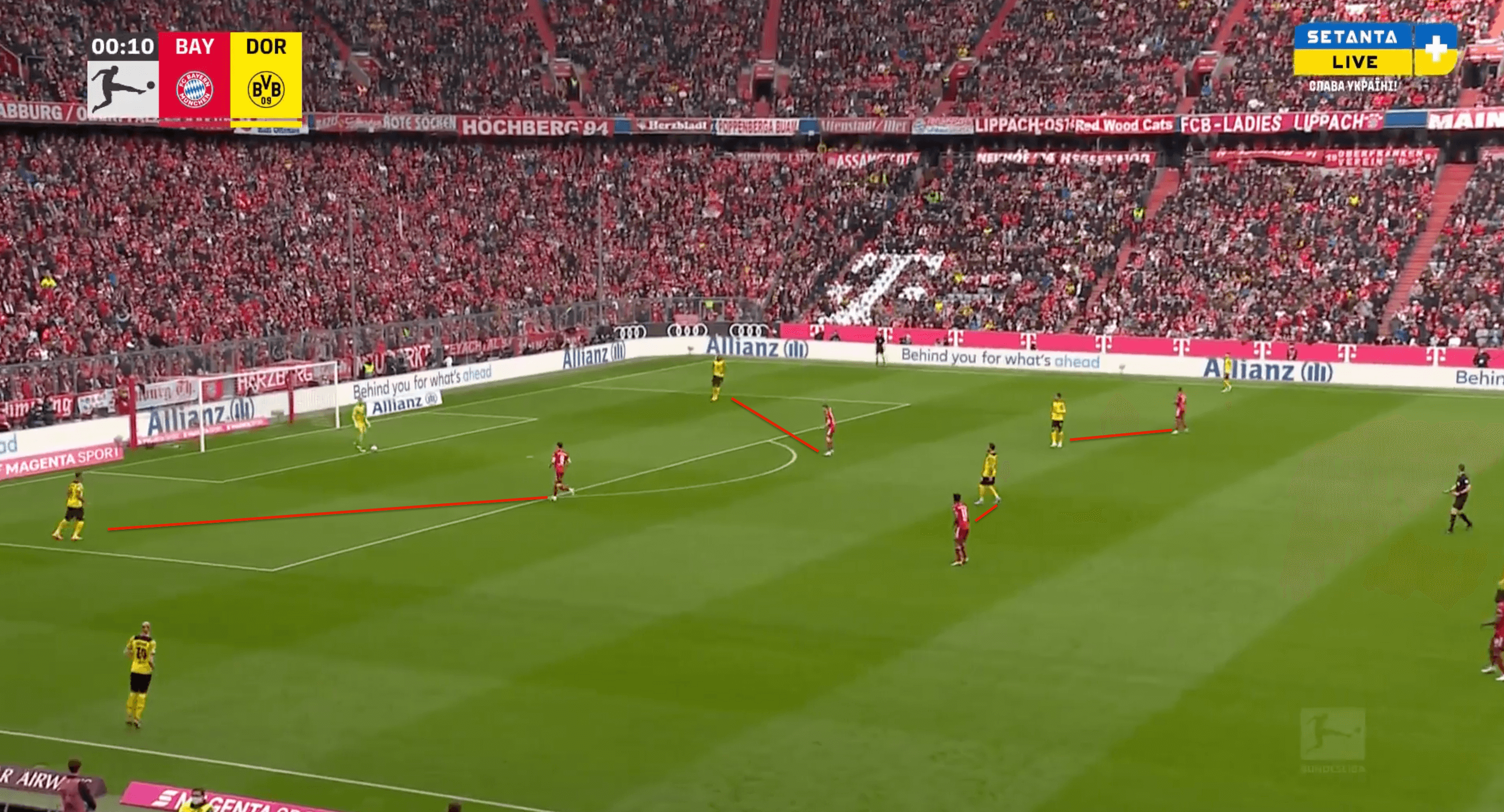 In the above image, we can see their 4-4-2 system that initially starts out as a 4-2-2-2 where the front two keep close tabs with the CBs while the two wingers behind them initially start closer to the two Dortmund defensive pivots but when the ball goes to the wing, they start pressing the full-backs while orienting themselves in such a shape.

The wingers would position in such a way that once the ball goes to the wing they would cover the passing options for the full-back to the interior midfielders while giving them only one option to play which is a pass down the wing to the wingers but that would also be easily intercepted by the Bayern full-backs.

This would mean that when Dortmund looked to play out from the back Bayern’s press would suffocate them to execute the right passes and it was mostly the theme of the game, especially for the first half. 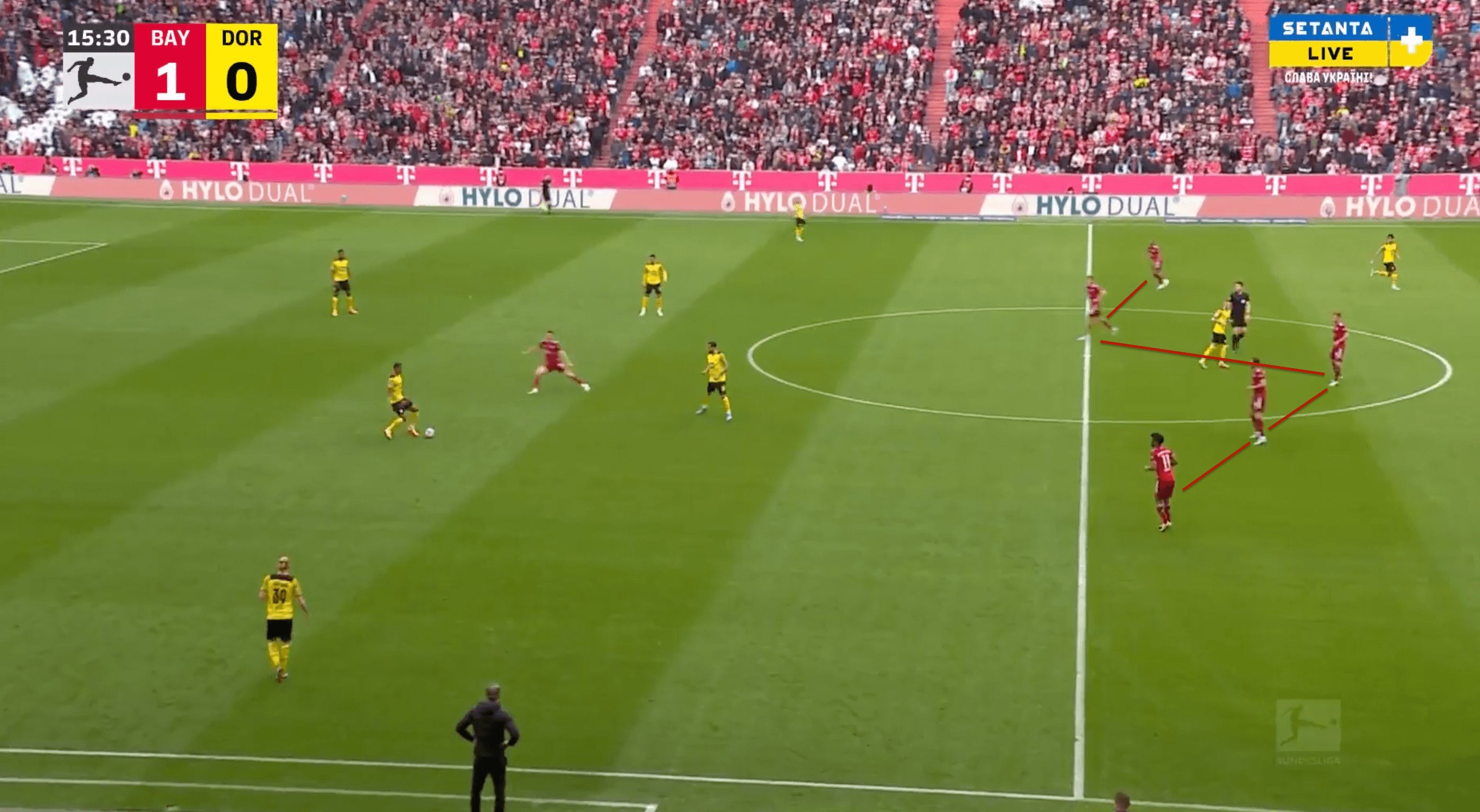 After the goal, Bayern pretty much settled and lessened their intensity of pressing a by a slight bit. They would still press high when necessary but mostly would cede a bit of territory to Dortmund. Their mid-block had a different shape which was in the form of a 4-5-1 shown in the image above where Lewandowski would be the sole forward while the wingers and Thomas Muller would join the pivots in a five men midfield line.

One way in which Dortmund had the opportunity to go past the Bayern block is when they decided to exploit the flaws of the ball-oriented pressing that Bayern deployed. The space and player left free on the far side was always an option and if Dortmund find a player who can play that pass, then often Bayern were left exposed on the far flank. 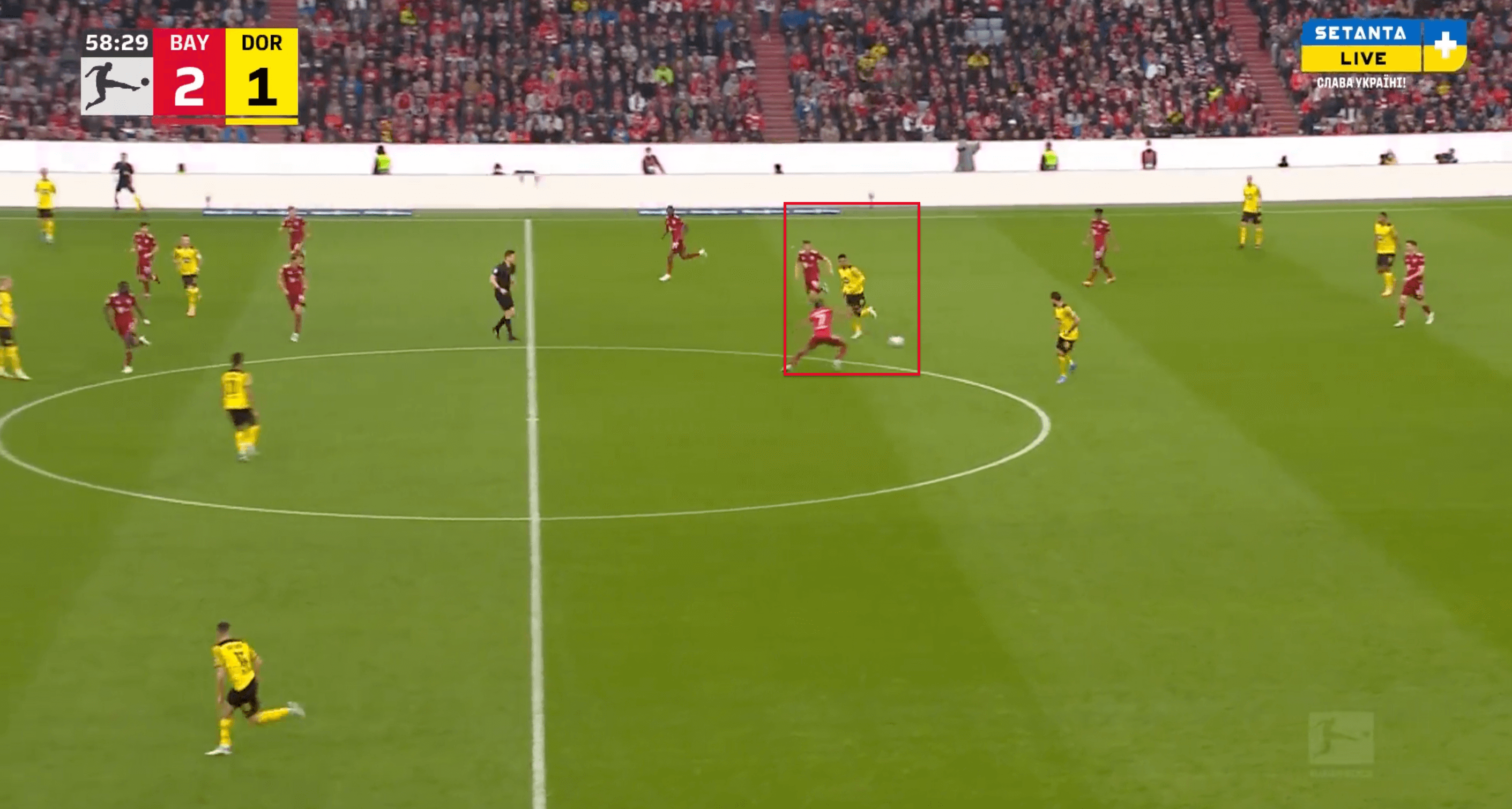 We can see that in the image above where Gnabry, the right-winger is very narrow which means that the Dortmund left-back has so much space to run into and also the Dortmund winger and he can then create a 2v1 situation with the Bayern full-back.

Another example of them exposing the ball-oriented pressing of Bayern can be seen in the image below where we can see how Bayern has surrounded the Dortmund’s block with more players but if Dortmund got the wall pass right with their players dropping deep and playing it back to a free man, then the switch to the far side was pretty much easily done. 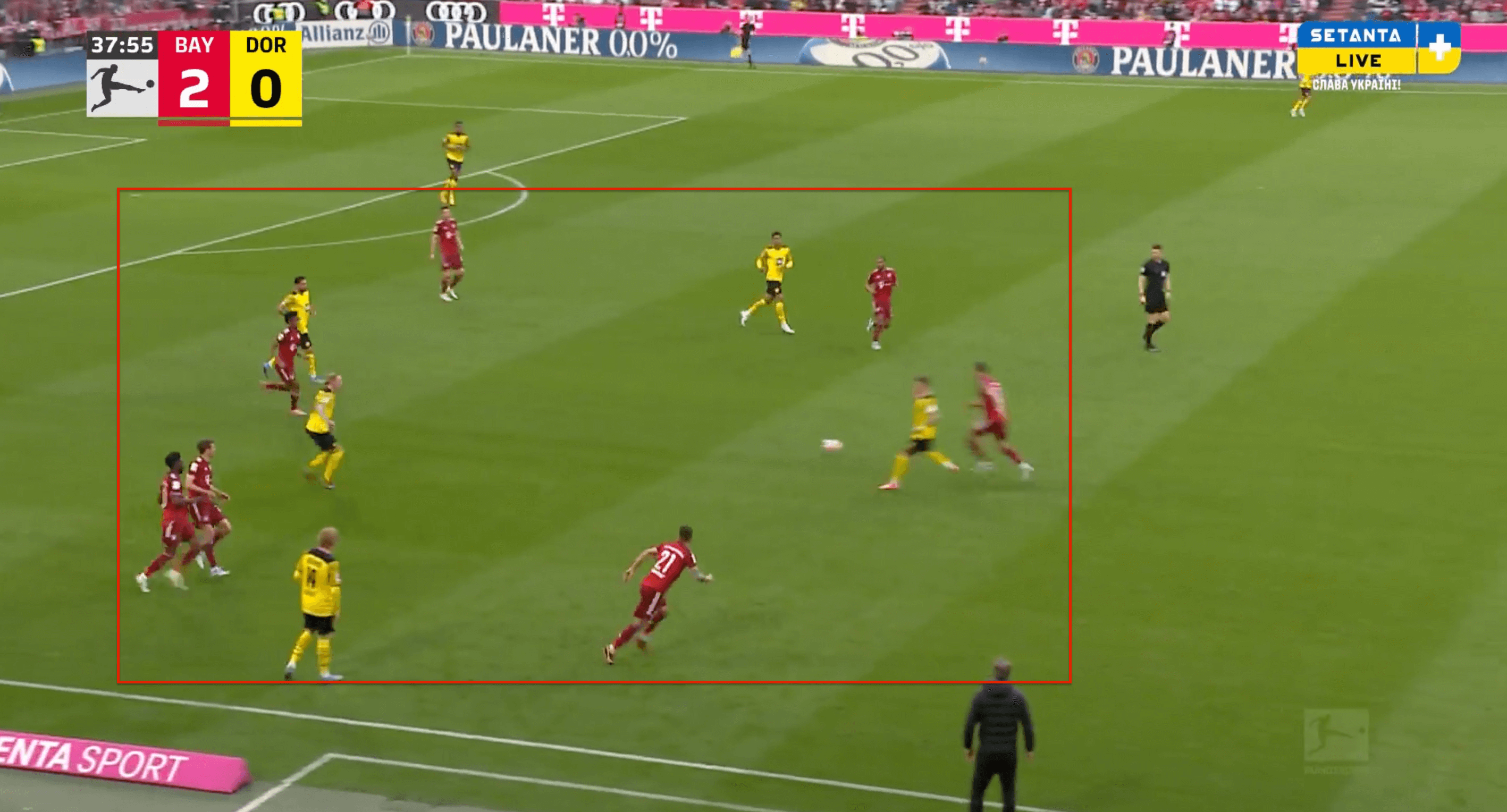 The key thing in which Dortmund struggled was to find an anchor in the form of Bellingham to switch the ball to the other side of the play. But whenever they did it they were easily able to move into the final third with ease. 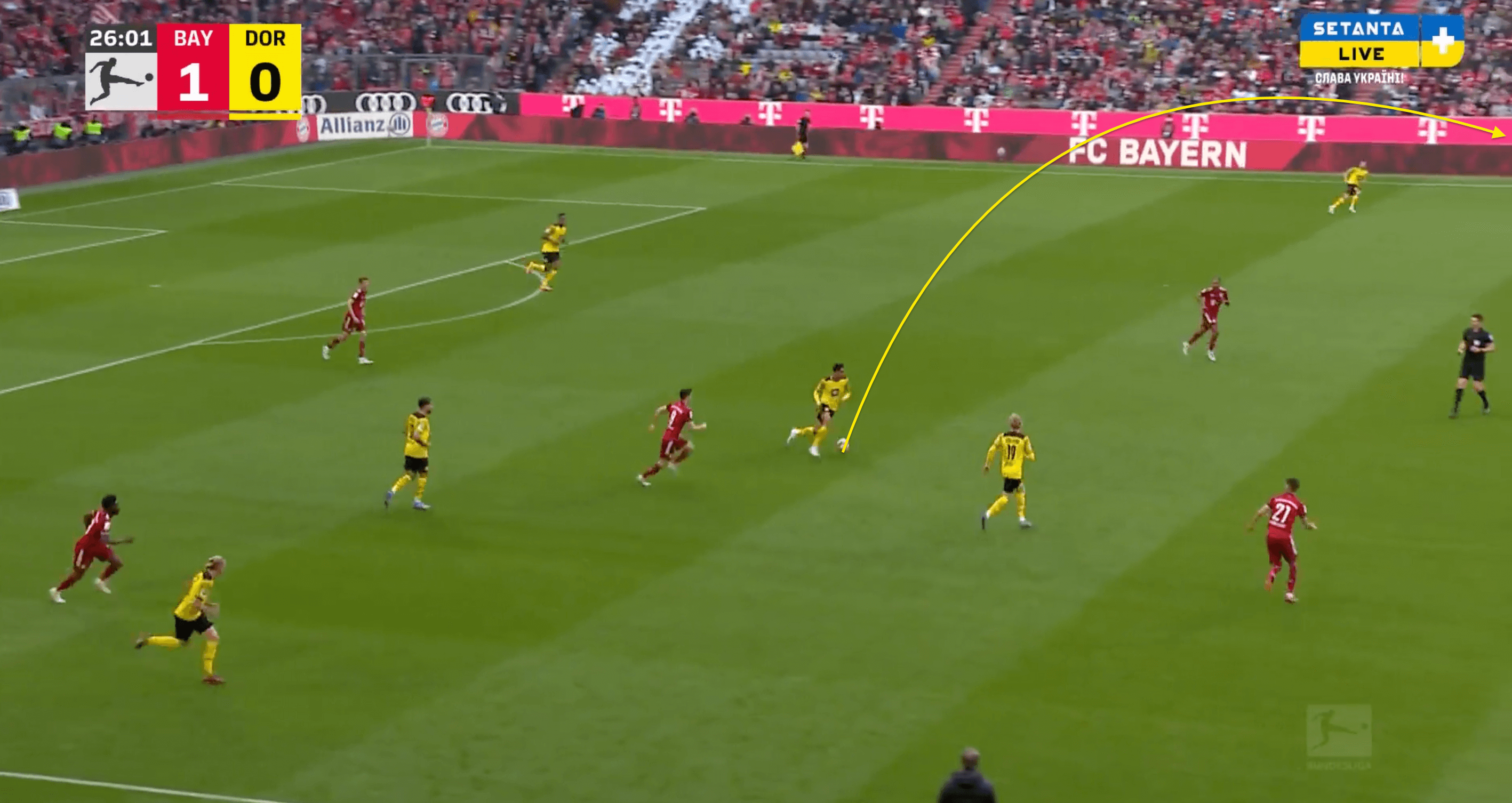 Dortmund usually wanted to play behind the Bayern’s defence whenever they had the ball and they would often use Upamecano’s lack of discipline in terms of his positioning as an advantage where Haaland would immediately make a run in behind the defence like in the image below. 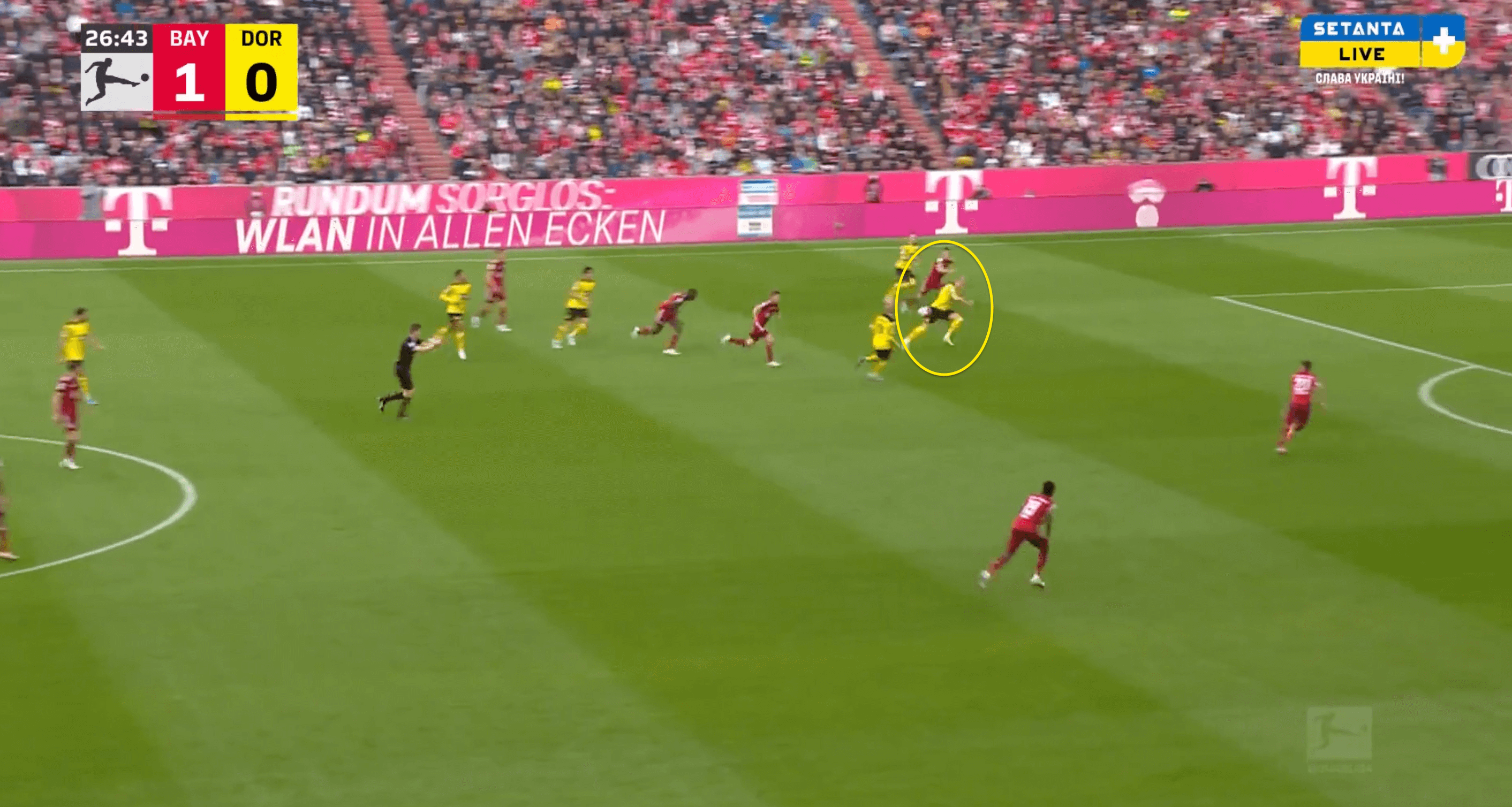 Dortmund went out with a similar shape that Bayern used out of possession which was a 4-4-2 system. But Bayern used a 3-man backline when in possession which saw the right-back join the defence to ensure that there is a positional superiority with a 3v2 advantage over the Dortmund front-line. 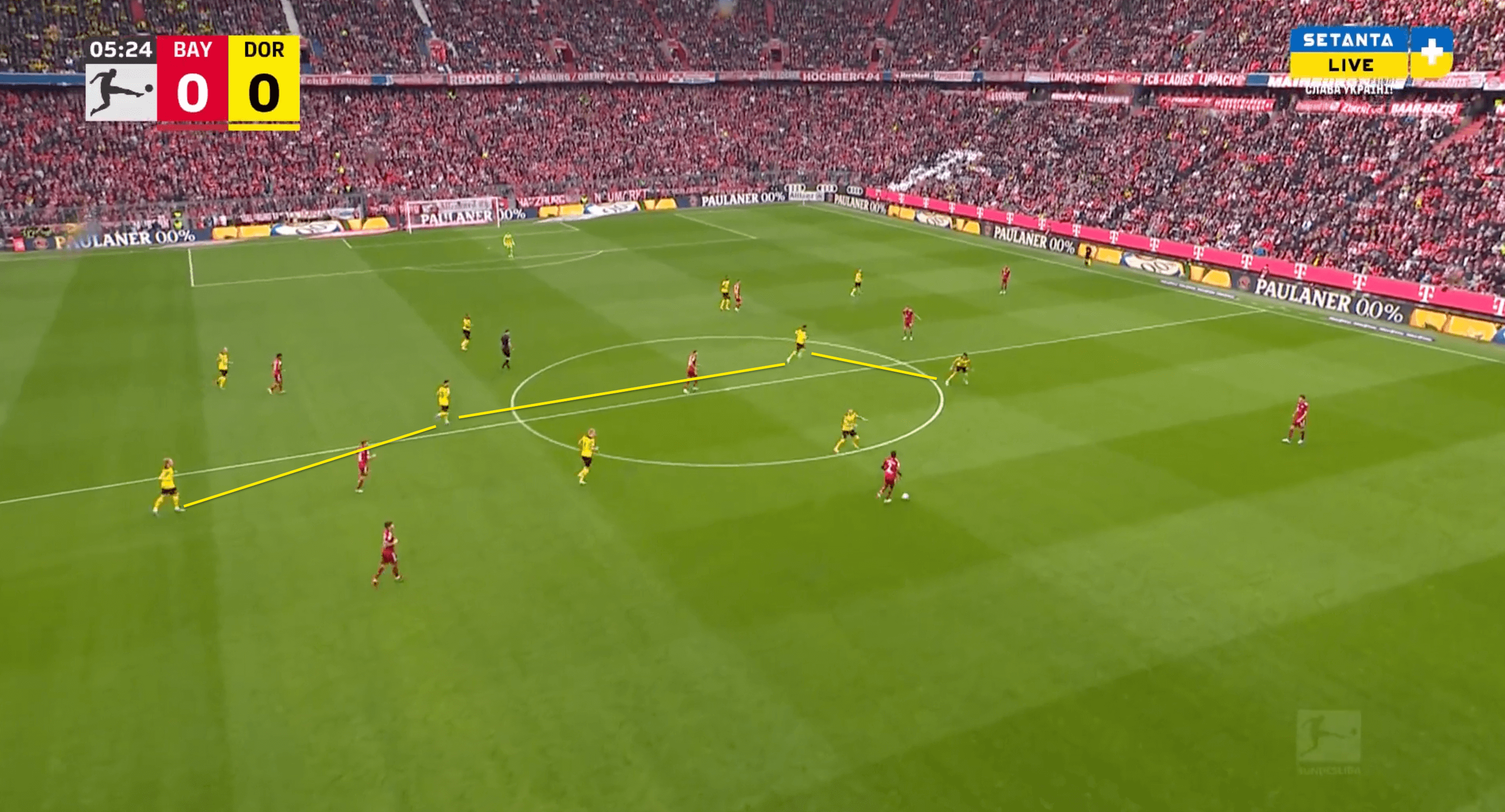 But due to that Bayern were able to pretty much play through the Dortmund press easily which led to Dortmund changing their shape of pressing where they would now use a 4-2-3-1 shape where one of Haaland or the Reus would cover the deepest midfielder which would mostly be Kimmich while the other would press the CB. This can be seen in the image below where Haaland is covering Kimmich while Reus goes out to press Upamecano and the wingers are positioned to press the wide CBs. 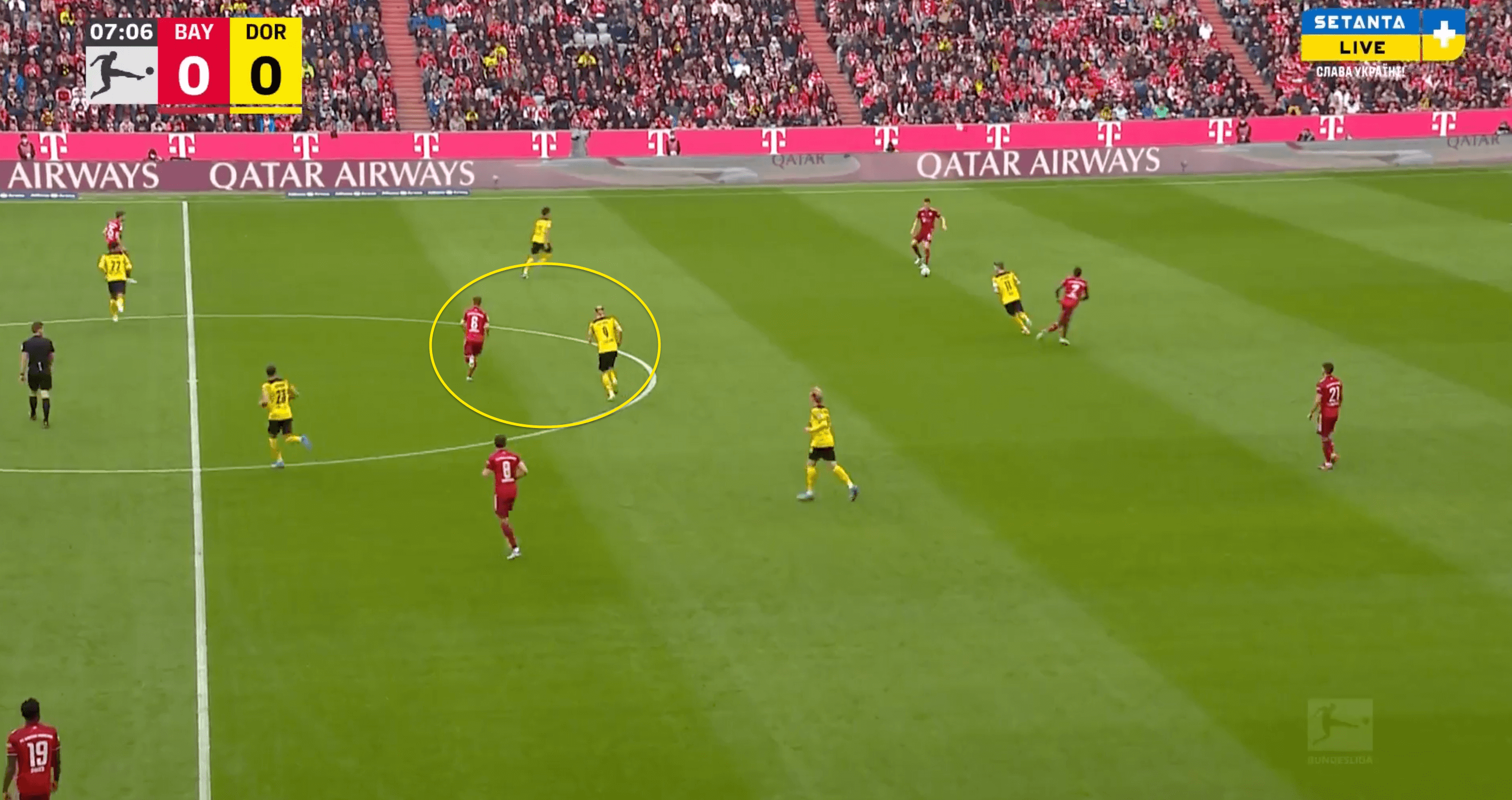 This made it slightly difficult for Bayern to play out from the back and that is when they decided to use Lewandowski more in the middle third by asking him to drop deep and hold the ball while the other forward around him used the space that was created due to him dropping. We can see an example of that in the image below where he is dropping that forces Brandt to cover him but he lands in between both Davies and Lewandowski causing him not to properly mark either of them. 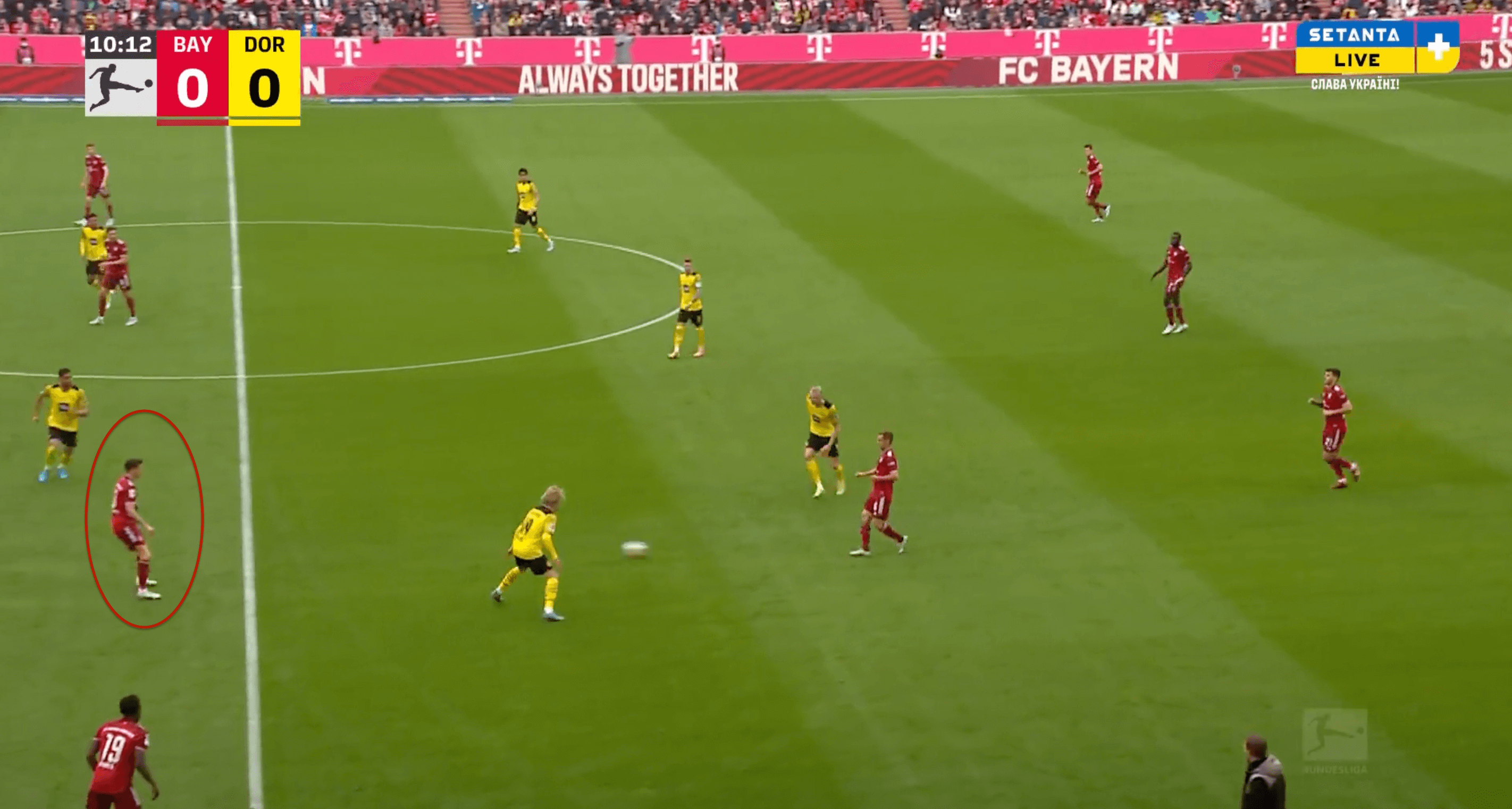 Bayern’s 3-2-5 system’s main aspect was the 5-men frontline that saw them look to overload the backline of the Dortmund defenders where they were able to have a free man always on the last line. The following example shows how they have a 2v1 overload on the far side of the pitch and a switch to that side would ensure Dortmund would be seriously being exposed by the Bayern players. 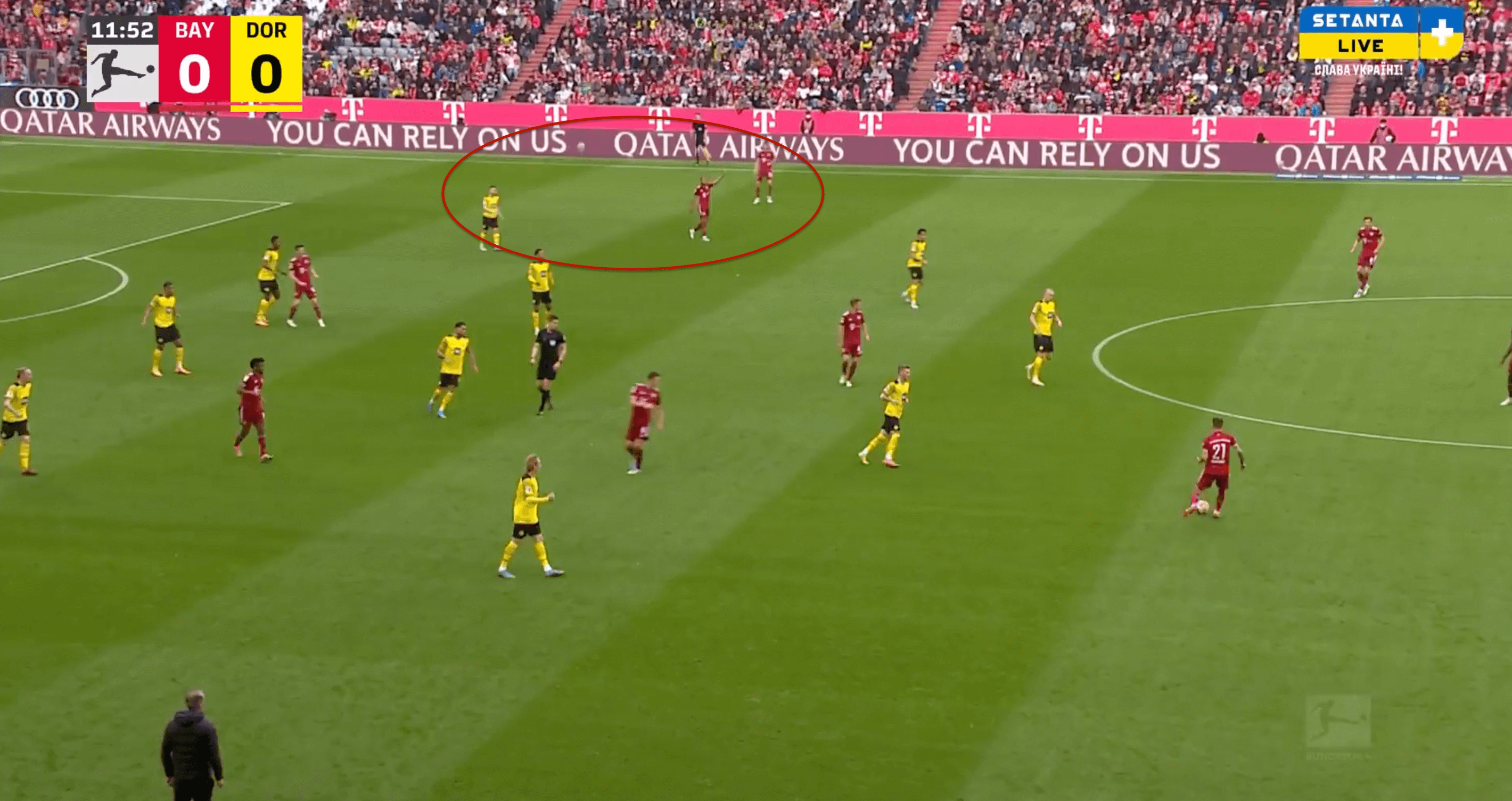 Bayern would ensure this overload takes place always on the far side with the winger pinning the far side full-back while the wing-back or the widest player on that side would be left free to be used. But Bayern often struggled to reach the far man owing to poor decisions by their backline on the ball or due to some good defensive shape from Dortmund. The second half had more of the latter where whenever Bayern tried to do that, Dortmund’s player looked to close the option pretty soon with good press. We can see an example in the image below where Bayern could have used the far side really well to their advantage if the white-circled player made a cross run dragging the right back with him opening the entire flank for the wide player to exploit. 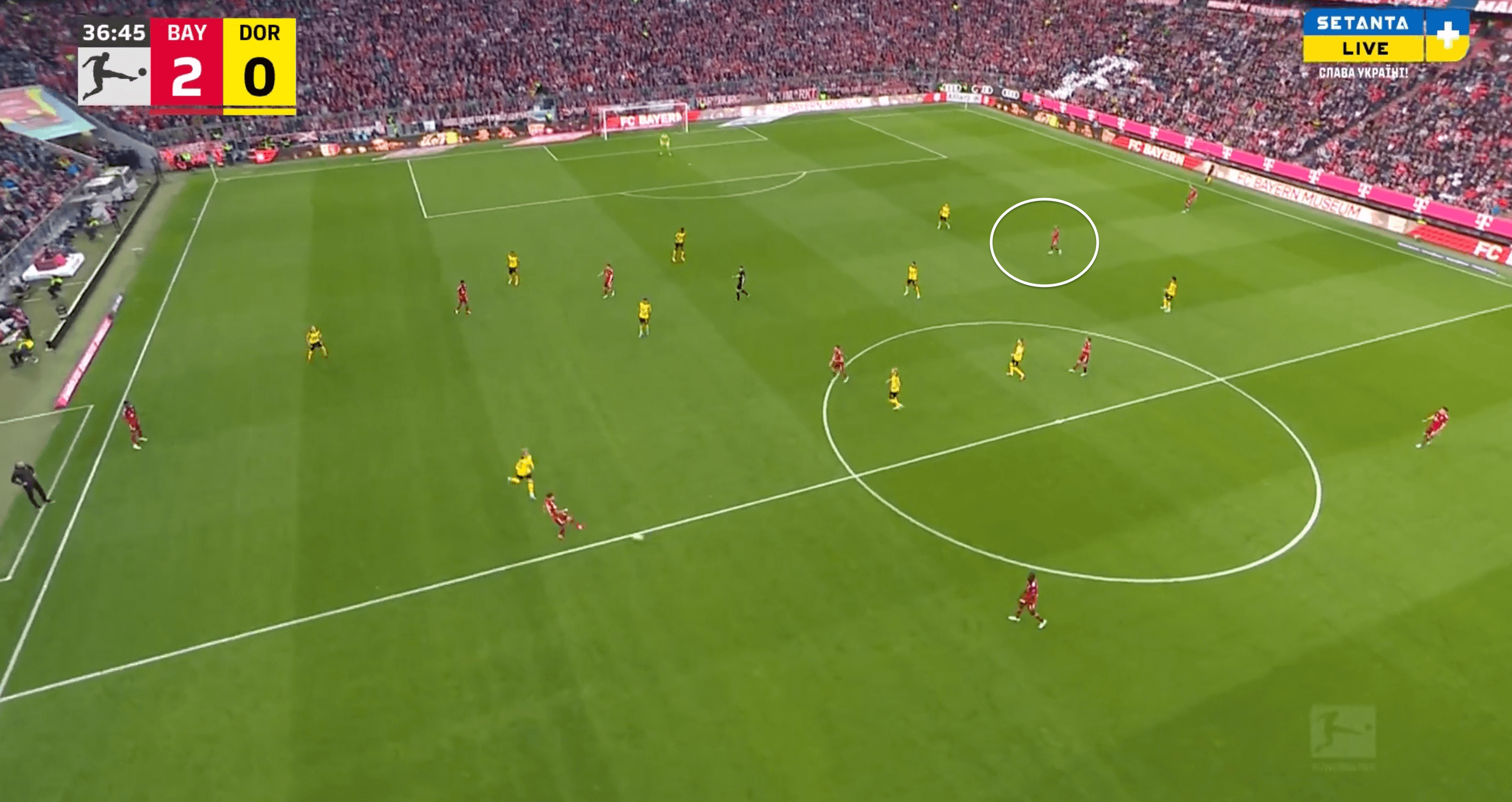 In the second half, Dortmund looked to increase the intensity of their press where they pretty much went with a man-man pressing that saw the entire front line of Dortmund marking the backline. Although it was a 5v4 as shown in the image below, Dortmund did manage to do well in situations by deploying a more ball-oriented approach that saw them implement better counter-pressing traps as well which also led to one of their goals indirectly. 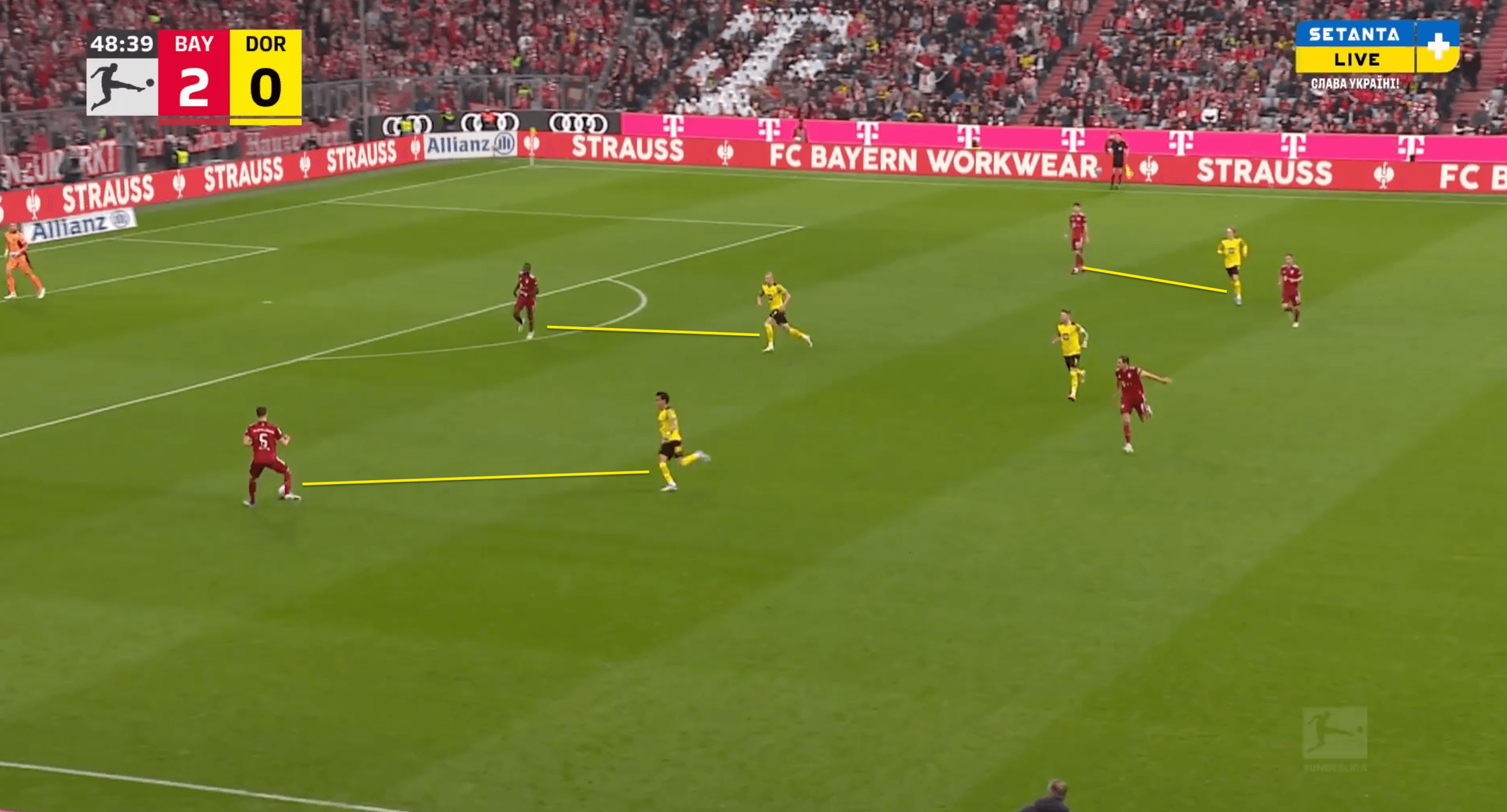 But Bayern was more stabilised in their play and with still a goal lead, they were able to keep the tempo of the game according to their favour and ensure that Dortmund does not really threaten a lot.

In the end, Bayern Munich’s assertion of their dominance saw them win the Bundesliga for a 10th consecutive time. This was made even more special as they won their title on their home ground and against their eternal rivals to commemorate a decade of dominance from them.