On Friday evening, both Borussia Mönchengladbach and reigning Bundesliga champions, Bayern Munich, will kick off their domestic campaigns in their first game of the season – against one another. Interestingly, both sides will have new faces in the dugout, with Mönchengladbach replacing now Borussia Dortmund manager Marco Rose with Adi Hutter, fresh off of an excellent season with Eintracht Frankfurt. Bayern Munich, of course, made the high-profile signing of Julian Nagelsmann, reportedly paying a fee that could rise to over £20 million in compensation to RB Leipzig in order to secure the 34-year-old’s signature. This tactical analysis will provide a preview of the fixture, giving an analysis of likely line-ups and formations, whilst also looking into the potential tactics either side will use.

It’s always difficult to predict the starting line-ups on the first day of the season. Both sides have had players competing in Euro 2020 this summer, whilst there are injuries and potential upcoming departures to take into account.

Mönchengladbach have been hit the most by injuries, with first-team regulars Marcus Thuram, Ramy Besebaini and Breel Embolo all set to miss this fixture, whilst Denis Zakaria is expected to complete a move to the Premier League sooner rather than later and may not feature as a result.

American defender Joe Scally has played well in pre-season and is likely to get the nod at left-back, but don’t be surprised to see the young German left-back Luca Netz play here either. Otherwise, there are unlikely to be any shocks with their line-up.

Bayern Munich have had a quiet summer with Dayot Upamecano probably the only new signing who will start, due to Bayern’s only other summer arrivals being Omar Richards on a free from Reading, and goalkeeper Sven Ulreich, also on a free from Hamburg. With Lucas Hernandez out and not expected back for a while, and Alphonso Davies potentially not at match fitness, Josip Stanisic is likely to get the nod over Omar Richards at left-back.

Bayern will look different this season. Jerome Boateng has left after his contract wasn’t renewed, whilst David Alaba and Javi Martinez also departed after their respective contracts ran out too. Joshua Zirkzee has also been loaned out to Anderlecht and there will be some pressure on the club to bring in players to strengthen the squad before the end of the transfer window – or their core of young talent coming through will be expected to step up. 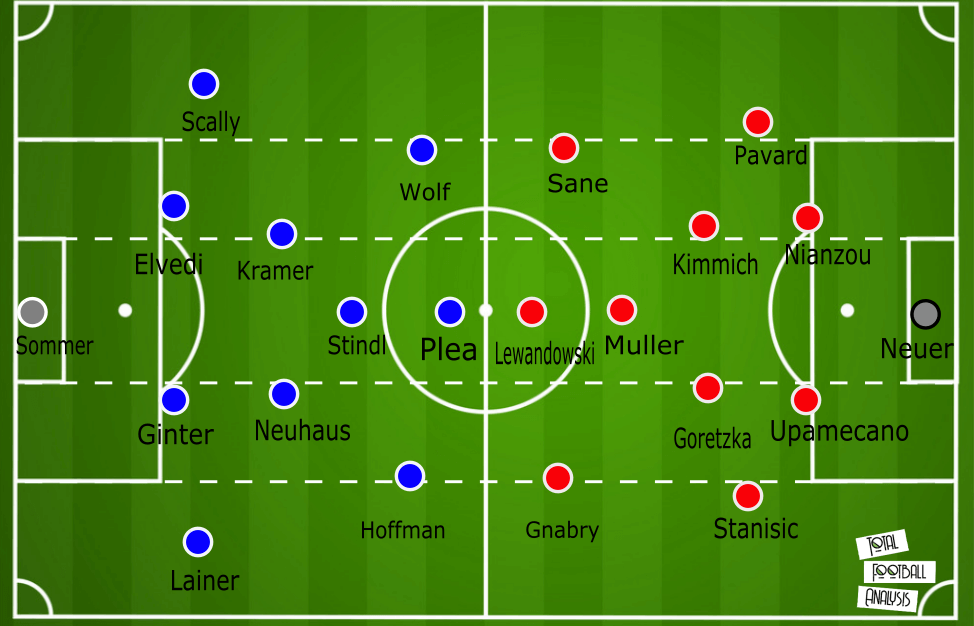 A backline of Pavard, Nianzou, Upamecano and Stanisic is a decent enough unit, but it isn’t going to intimidate Mönchengladbach by any means. Whereas perhaps a side with Lucas Hernandez and Alphonso Davies alongside Upamecano and Pavard might make them at least second guess pressing intensely, there’s a good chance that Hutter’s side looks to put pressure on Bayern’s young back line, at least initially.

Mönchengladbach will keep a horizontal compactness throughout their defensive shape and will press with a narrow front three. They will also keep a vertical compactness, structured with a staggered midfield three, who keep a close distance to one another whilst bridging the gap between the defence and the front three. The 10 will look to prevent Kimmich from getting on the ball, whilst the other two central-midfielders will man-mark. One thing worth noting is how the double-pivot are positioned in front of the players they’re marking. In the image below Kaiserslautern looked to have their midfielders operate between the lines, and Mönchengladbach were comfortable enough dealing with this, with their midfield duo keeping them in their cover shadow, and ensuring they stayed vertically compact with their number 10. 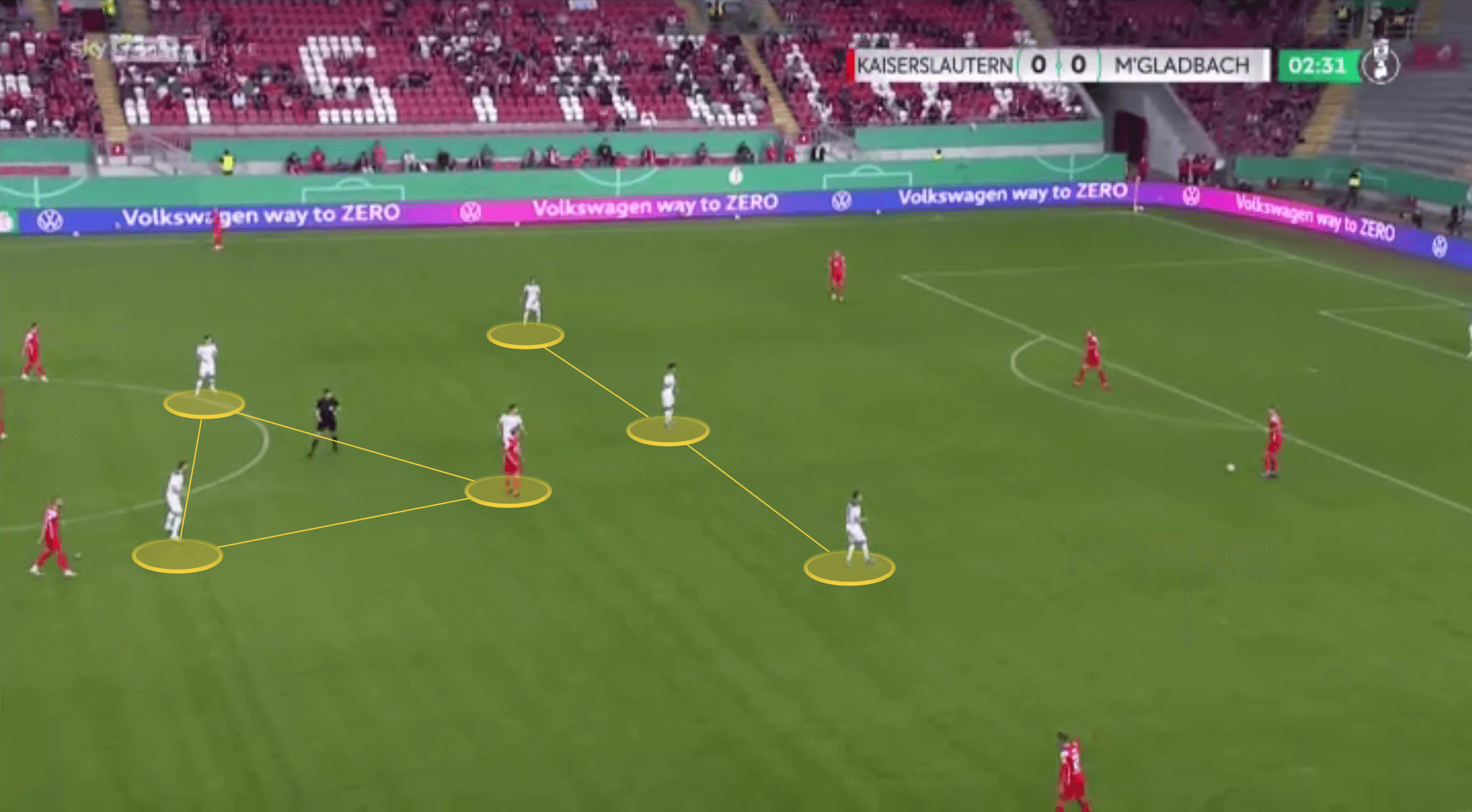 As the ball is worked wide from the back, Mönchengladbach will seek to keep central compactness and have pressure come from two different angles, either showing the full-back to play inside, into the crowded central channel, or be forced to recycle possession.

There is an example of this shown where Mönchengladbach’s right-back and right-sided forward provide the pressure with the midfield trio remaining compact and preventing any opposition midfielder from being a viable passing option. 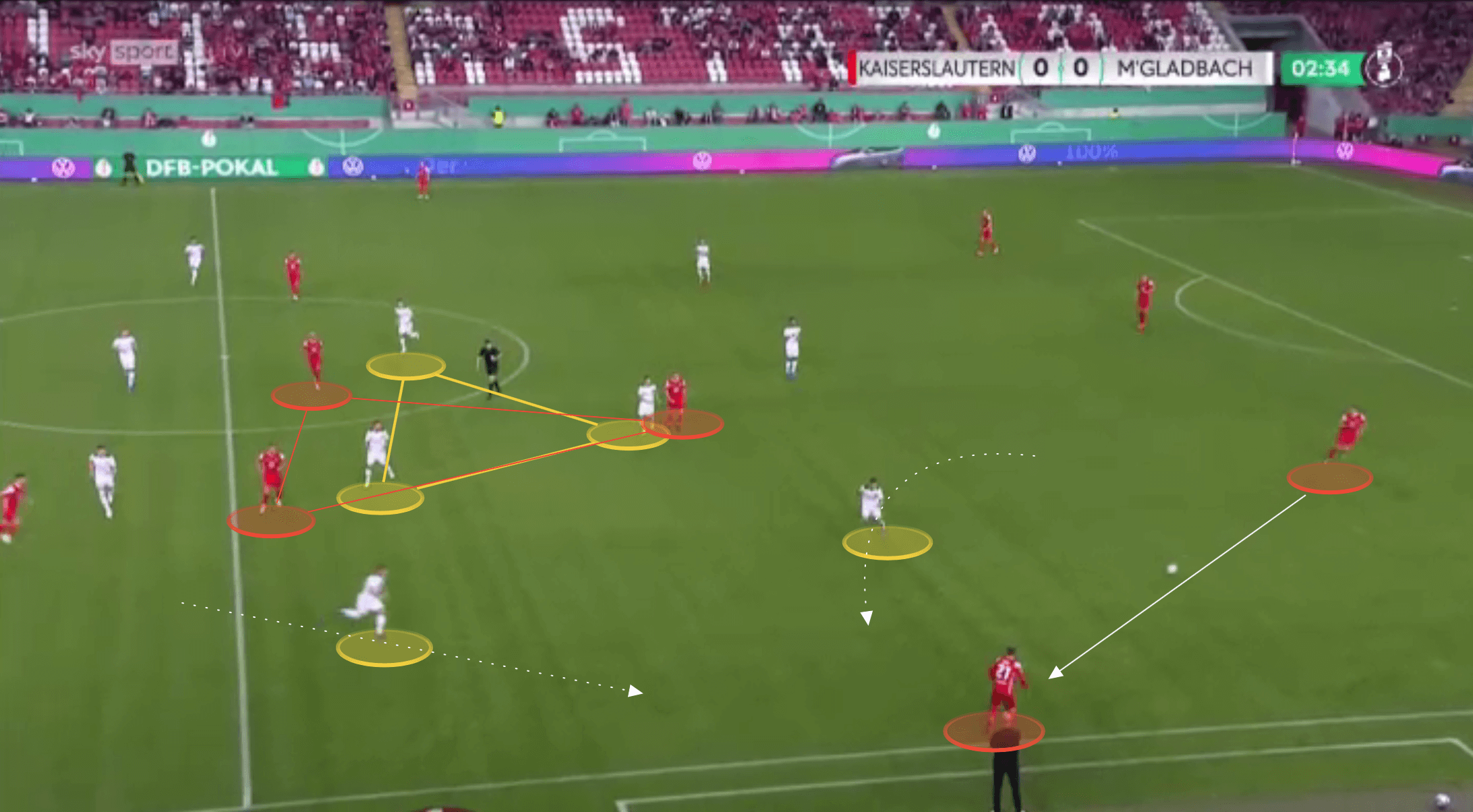 As the ball is circulated once more, Mönchengladbach will use this opportunity to steal ground with their press and force an error from the defence. Pushing forward with the back pass, the front three look to target the remaining three of the opposition back four, due to the full-back still being further forward. The 10 then pushes up to man-mark the pivot showing for possession. 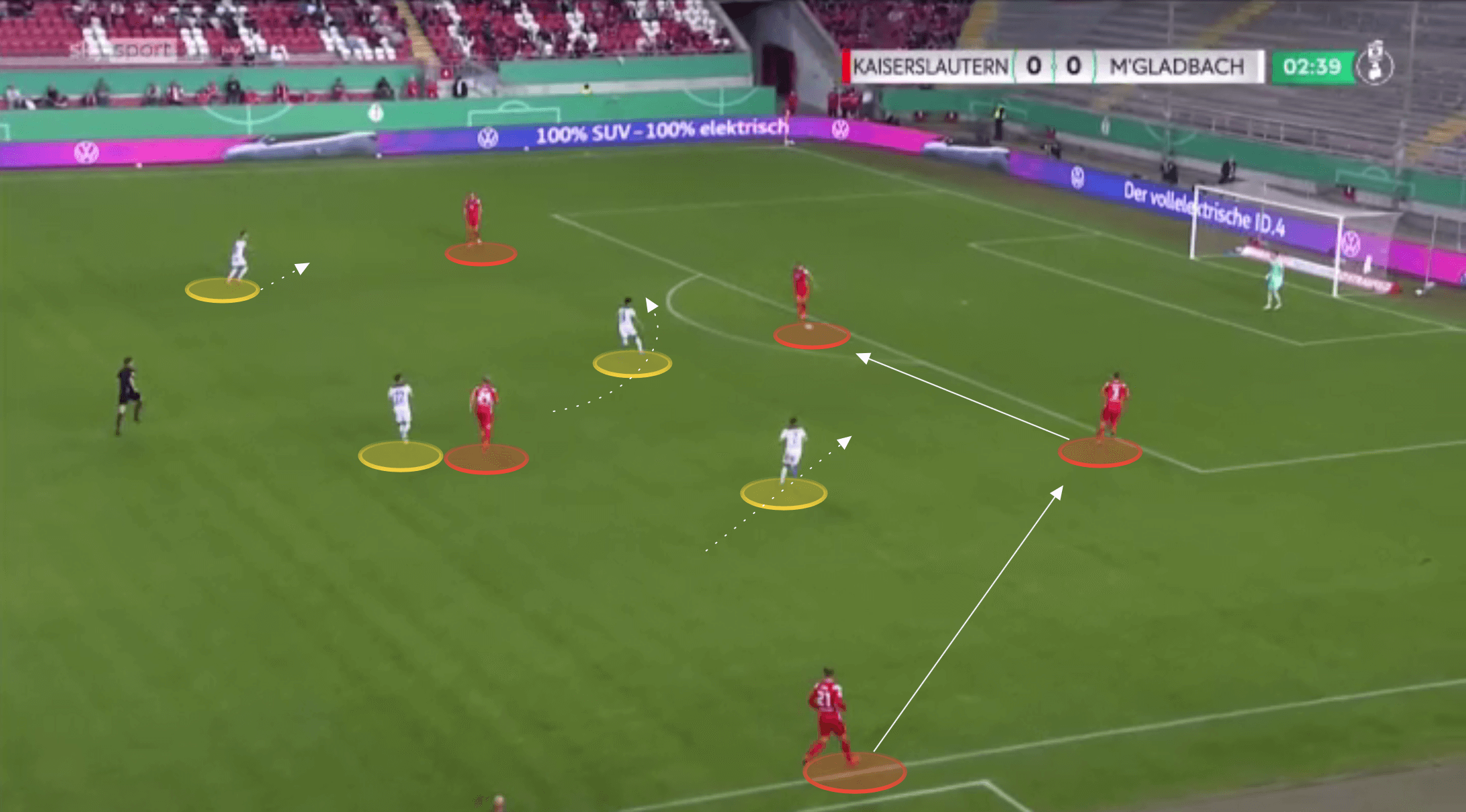 If the defence looked to play a riskier pass here – perhaps a lofted pass to the right-winger, expect Mönchengladbach’s front three to remain inside the Bayern full-backs. In the case of a turnover Mönchengladbach will look to quickly play forward themselves and make use of a 3v2 situation in the centre of the pitch.

Mönchengladbach’s compactness will continue even as the opposition advance the ball well inside their half. They will look to restrict Bayern’s fluid group of four attackers – Lewandowski, Müller, Gnabry and Sané – by looking to force as much of Bayern’s attacks down the wings. With the absence of Alphonso Davies, there is a far lower risk in doing this. 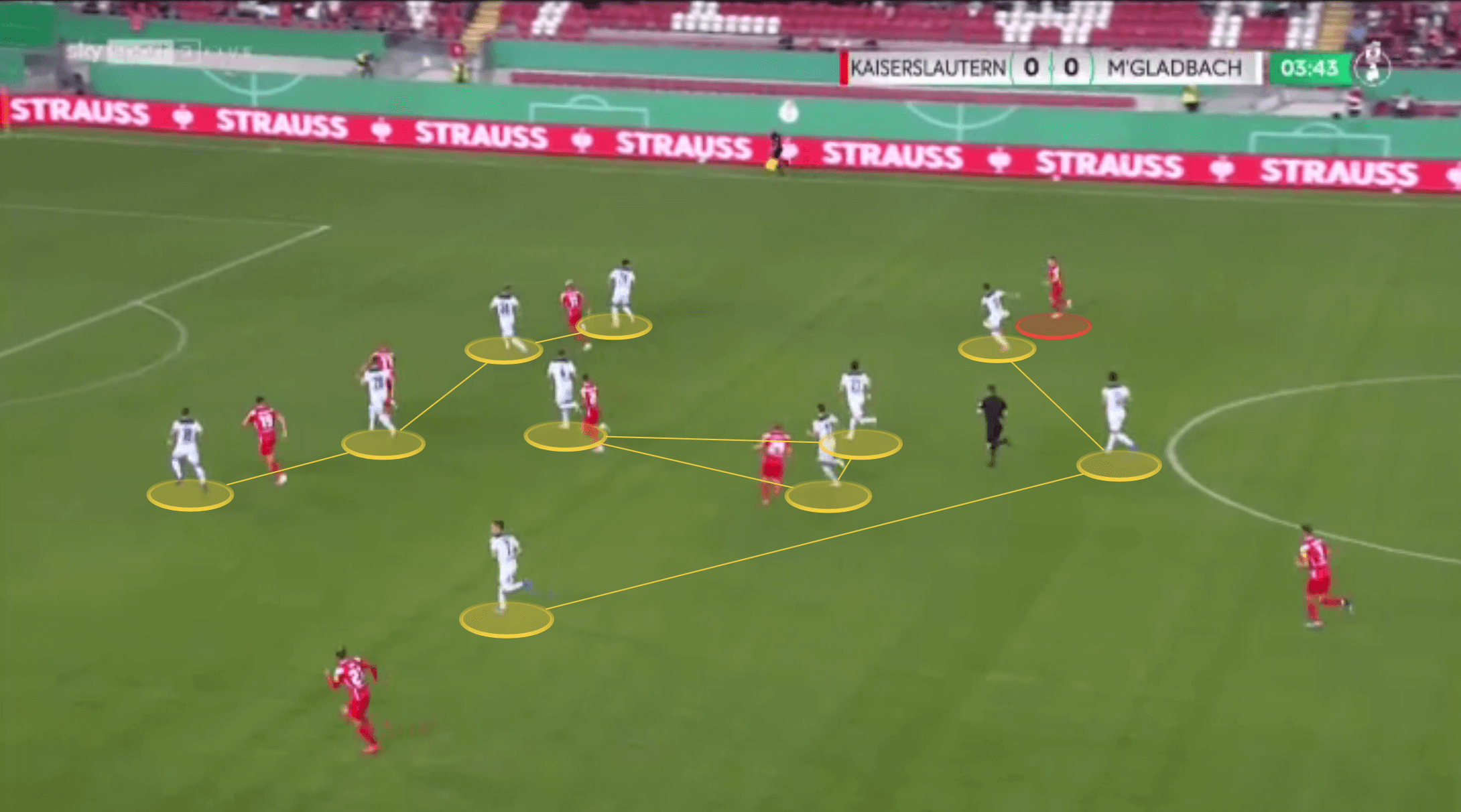 How Bayern will look to beat the press

In order to gain some perspective on how Bayern may look to work around this pressing structure we can take examples from Mönchengladbach’s pre-season game against Kaiserslautern as well as looking at how Bayern have played through Mönchengladbach before.

Goretzka is likely to start deep, with Kimmich, and play as a double pivot. This will not only force one of Kramer and Neuhaus forward themselves, but it will allow the full-backs to push wider, stretching the Mönchengladbach press.

However, BMG will want to keep that compactness in midfield and if Bayern can circulate possession quickly and accurately, there will be opportunities to gain central space. 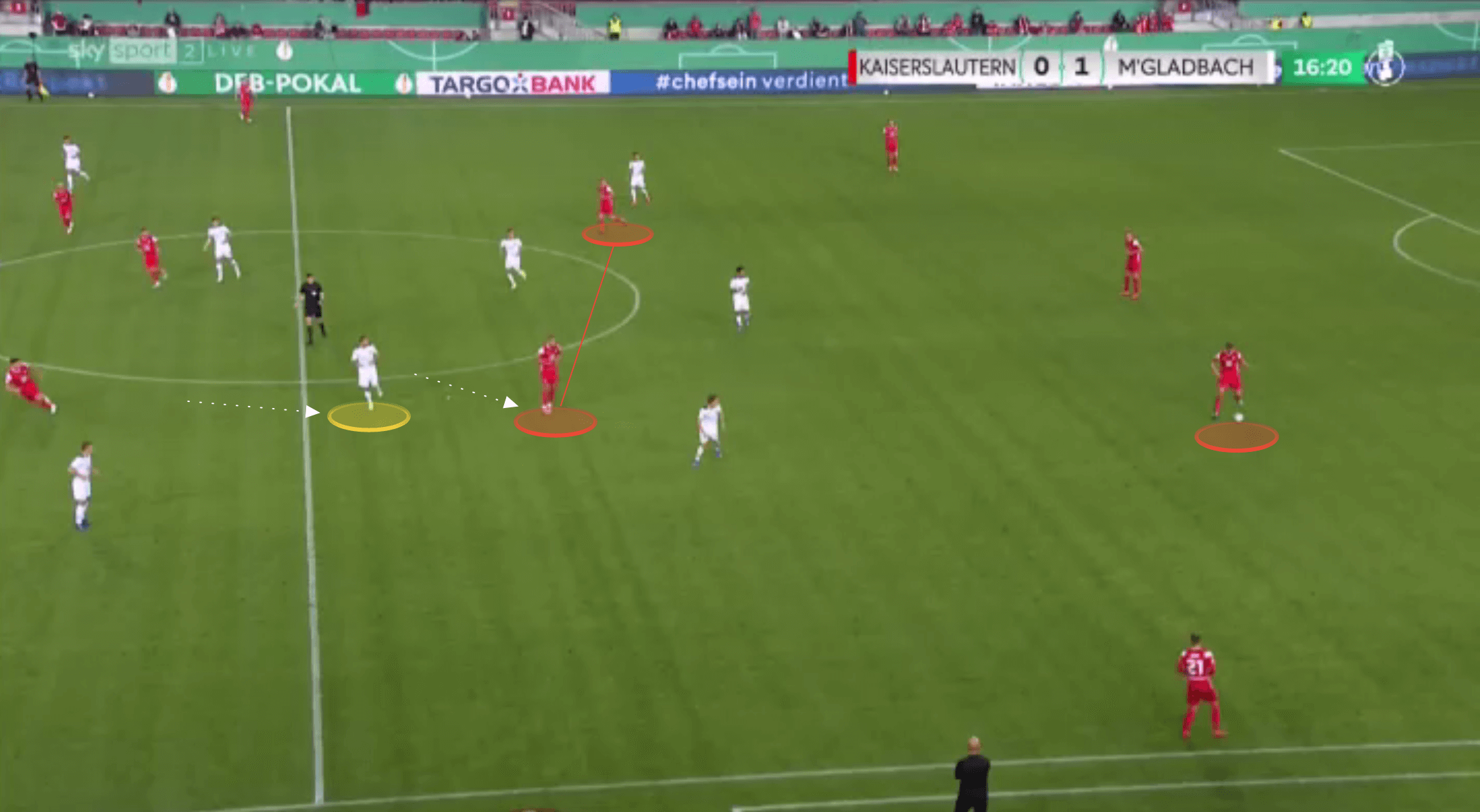 In the image shown above Mönchengladbach’s midfield reacts to the double pivot, by having one of the pivots push forward.

However, as the ball is circulated, this Kaiserslautern midfielder looked to drift into a deeper position, whilst Mönchengladbach’s midfield looked to shift across. They had to do this, rather than allowing the highlighted BMG midfielder, Neuhaus, to step forward, due to a forward roping into the 10 space. Neuhaus had to shift across to keep this player in his cover-shadow. Müller and Lewandowski will take it in turns to drop off into this space throughout the game, and Goretzka and Kimmich will potential be able to use this find space. 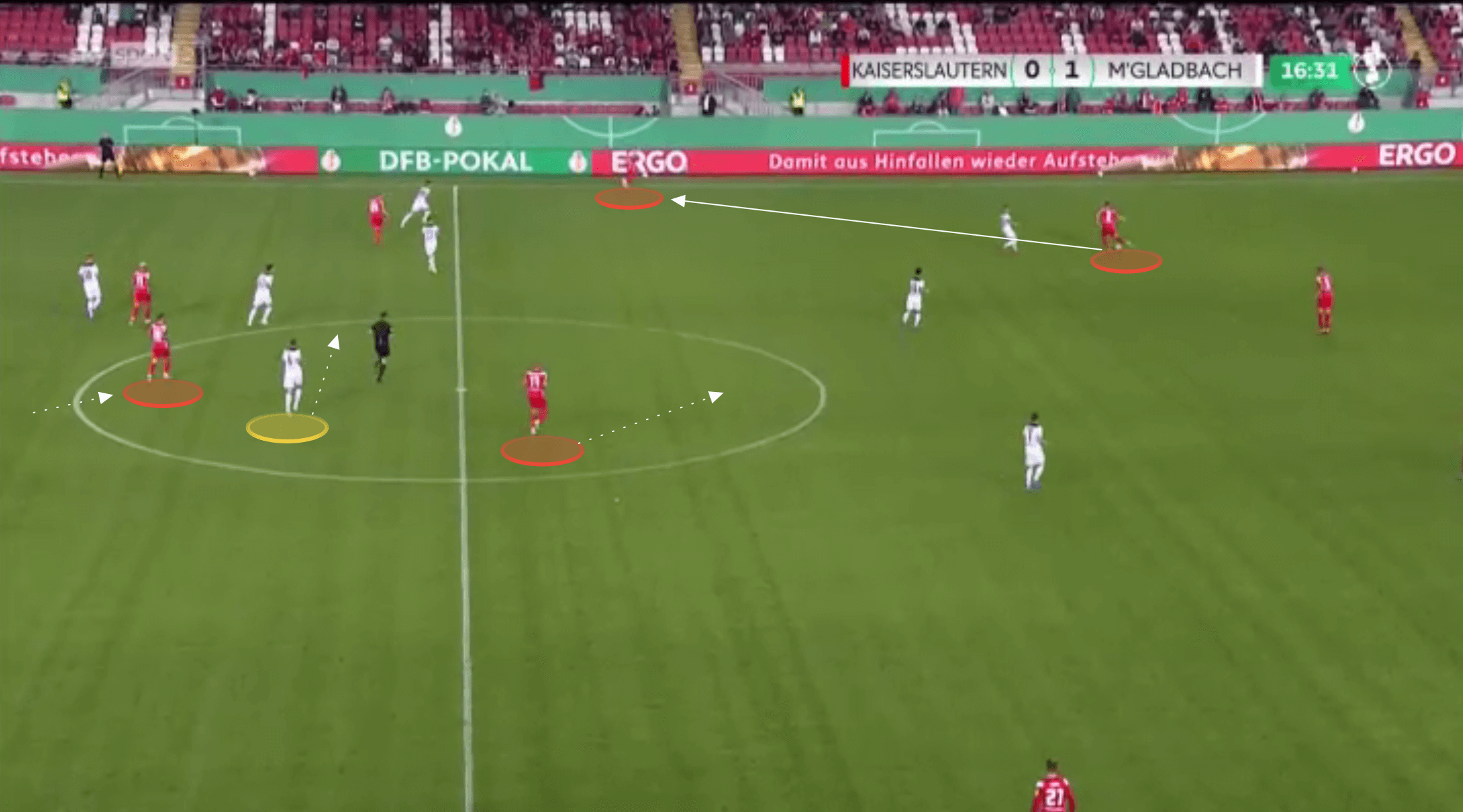 A quick exchange of passes back into the centre-backs and the pivot can now receive possession past the Mönchengladbach press. However, in an attempt to prevent them from having plenty of time on the ball Neuhaus had to react by stepping forward to press, which in turn left space behind him, which Bayern may look to fill and play into. 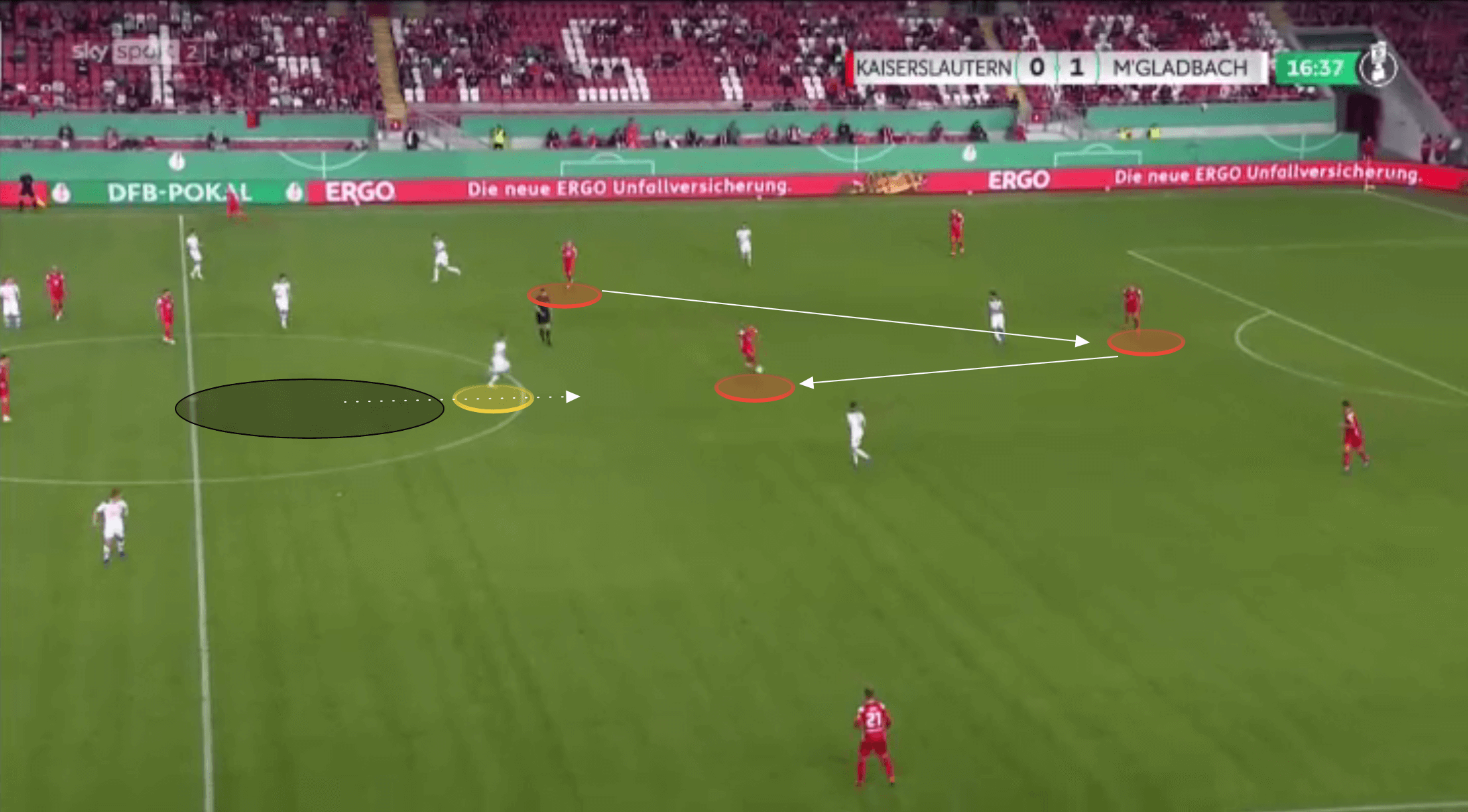 There’s evidence to back this up from Bayern’s fixture against Mönchengladbach at the end of last season.

Bayern were able to play through the compact front three of Mönchengladbach due to their flatness, with Kimmich more than comfortable receiving possession only a matter of yards from the press. 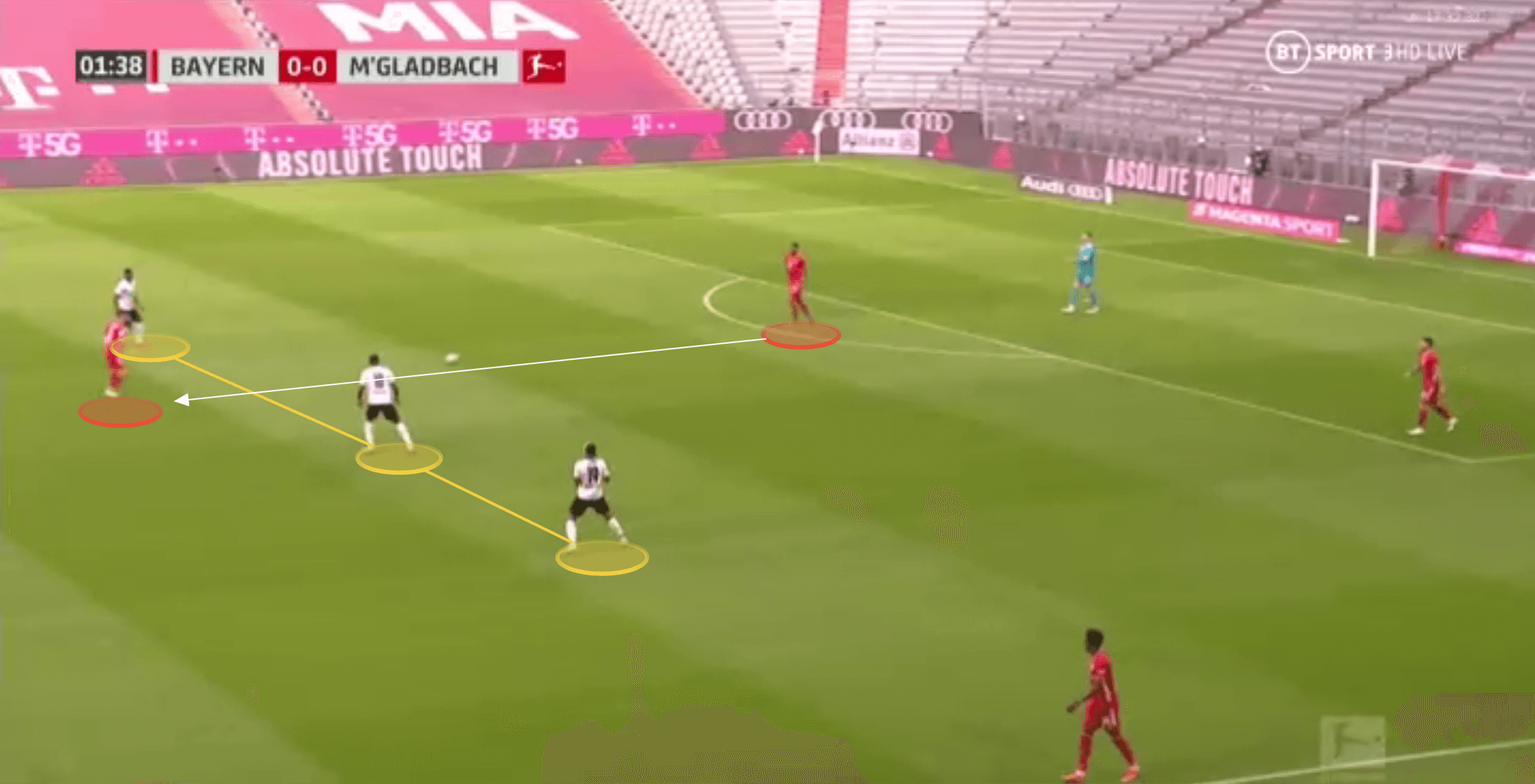 The German pivot then turned on the ball and drove forward, and drew in the press of Mönchengladbach’s midfield. Lewandowski dropped into the 10 space and Kimmich was able to find him with a line-breaking central pass, whilst Müller remained on the last man. We can see the pass from Lewandowski in the image below, whilst we can also see how quickly Bayern pushed their players forward. Mönchengladbach will look to force them to play wide, but as we can see from the amount of players pushing forward, particularly on the left flank, Bayern will adapt to this, even if they are missing Davies. 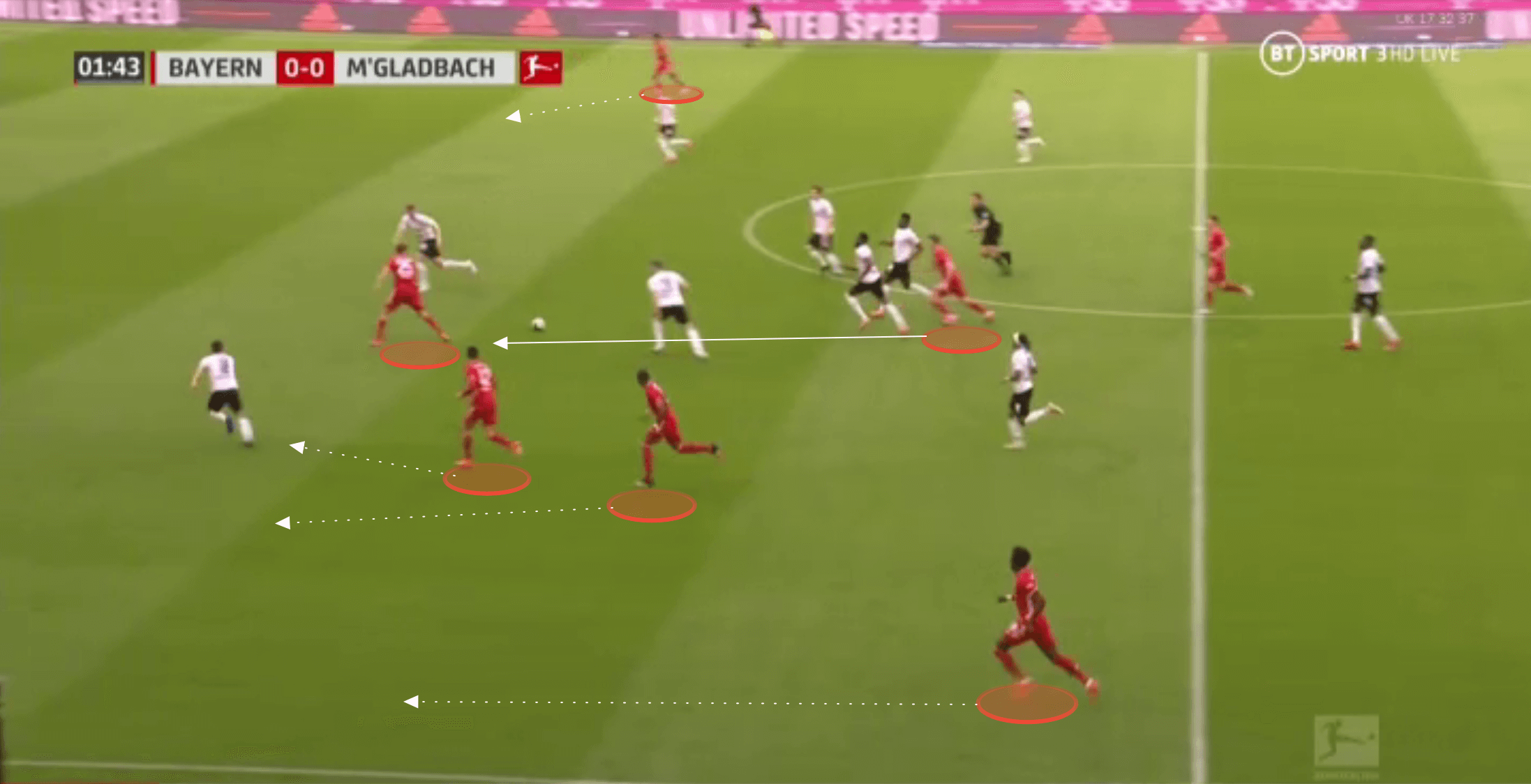 Given Bayern and Mönchengladbach played each other in a pre-season friendly last month, there were some tactics seen in that fixture that we are likely to see emerge in this game, even if the starting line-ups are likely to vary, especially in Bayern’s case who fielded a weaker side.

Nevertheless, Mönchengladbach, who won 2-0 on the day, faired particularly well from playing quick-paced, lofted crosses into the area, looking to hit attackers generally positioned on the blind side of most, if not all Bayern defenders.

The principle of this can be seen below where a quickly taken corner resulted in Bayern’s defence pushing up and leaving space for a well-timed run to be met with an equally well-placed cross. 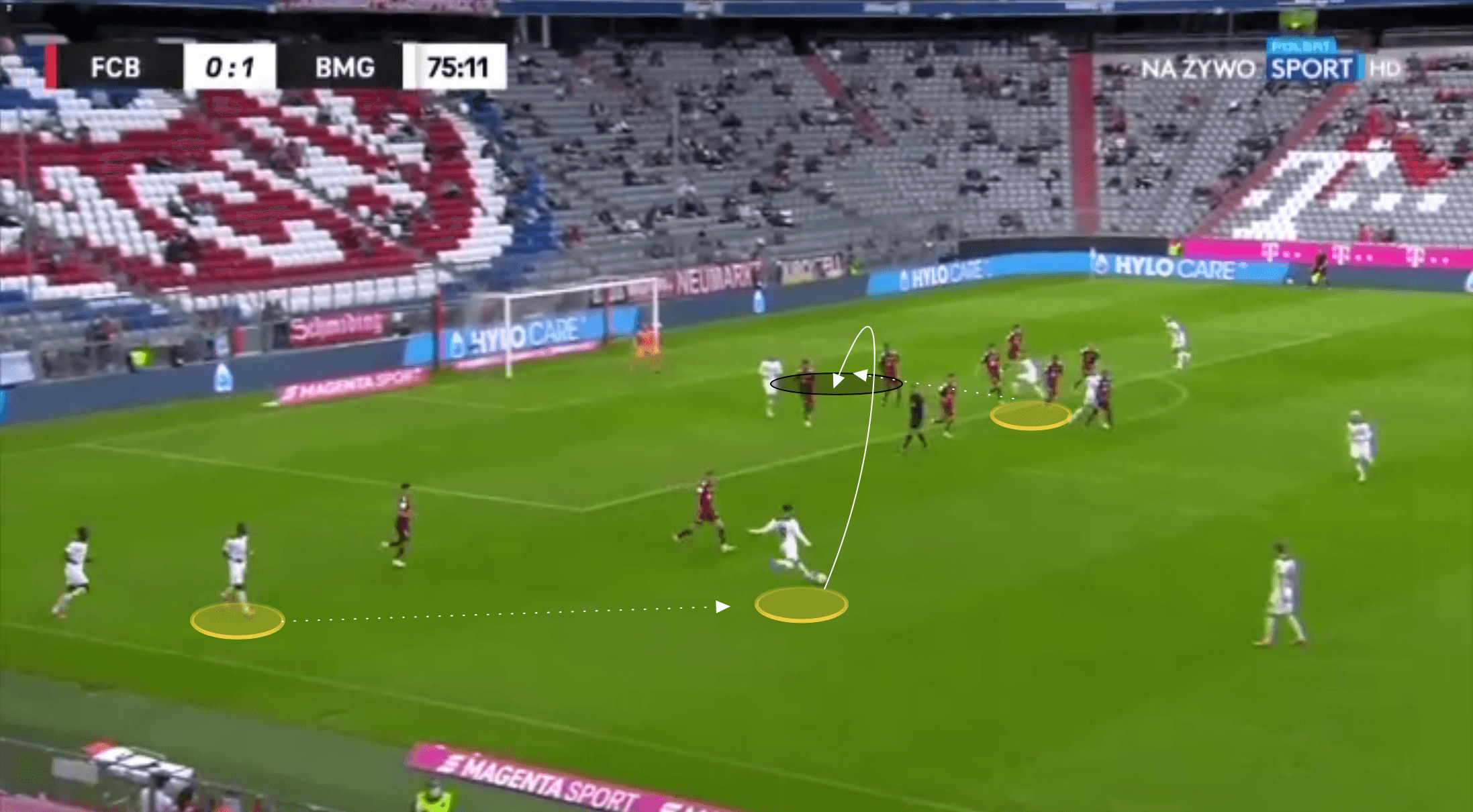 These crosses aren’t necessarily going to be in-swinging all the time, but they are likely to be hit towards that middle-to-back post range, and directed between 8-12 yards out from goal.

With Bayern playing a less experienced defender in the left-back position for this game, Mönchengladbach may well target isolating this player with these kinds of crosses. An absence of attackers in a central position, like in the image below, doesn’t mean these crosses can’t be played in. With the attention of Bayern’s backline shifted towards the crosser, it provides an opportunity for the right-winger to start their run from the blind-side of the left-back and steal in front of them to latch onto this type of cross. 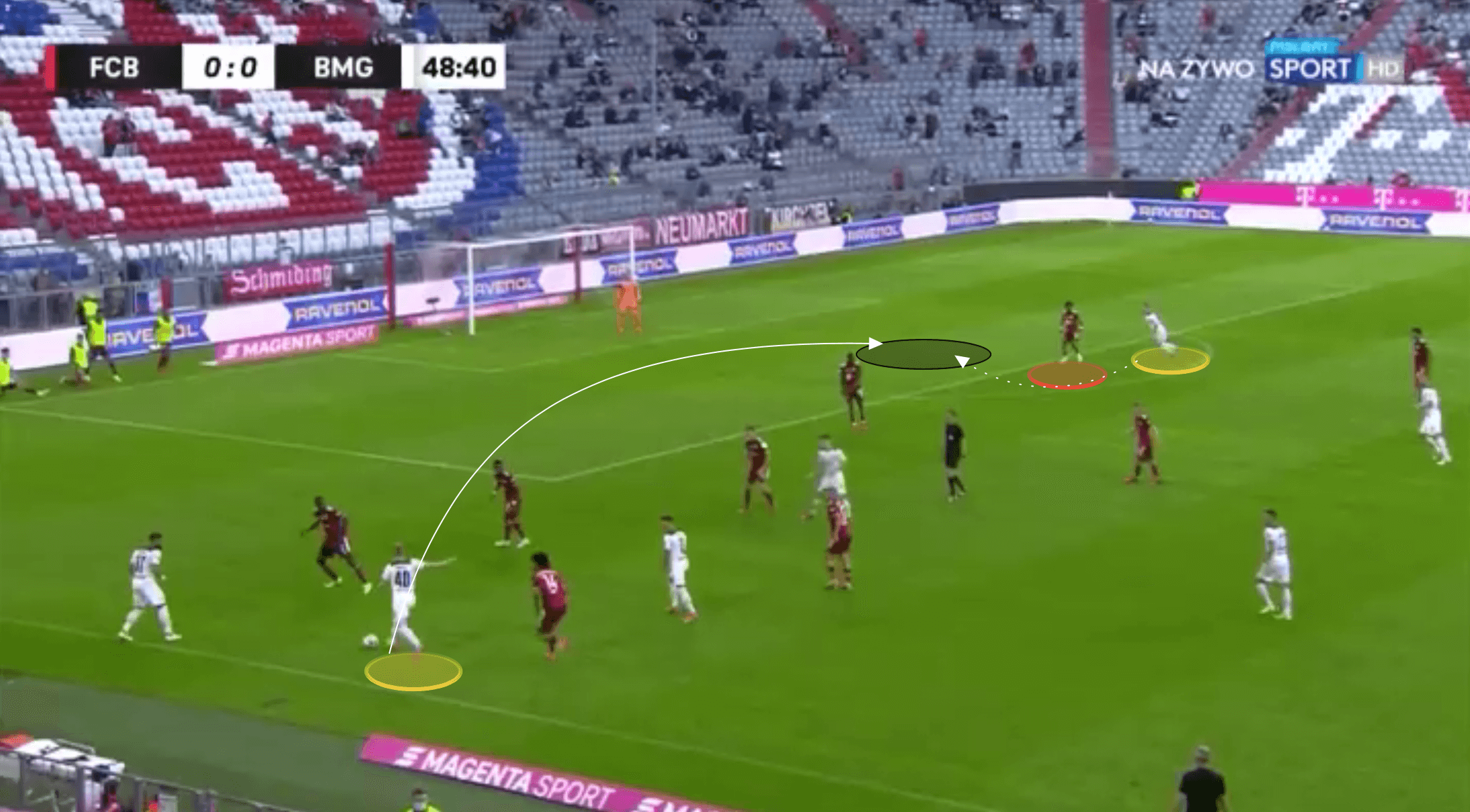 Adversely, Mönchengladbach may look to pack the centre of the pitch, but are likely to only do this once they have suitably stretched Bayern’s defence. If they can shift the play quickly and accurately from one side to the other there may well be space created between Nianzou and Upamecano. Expect Mönchengladbach’s attackers to get in between the two centre-backs, and any forward runs from their midfielders in a bid to join them and overrun the centre-backs in a bid to get on the end of one of these crosses. 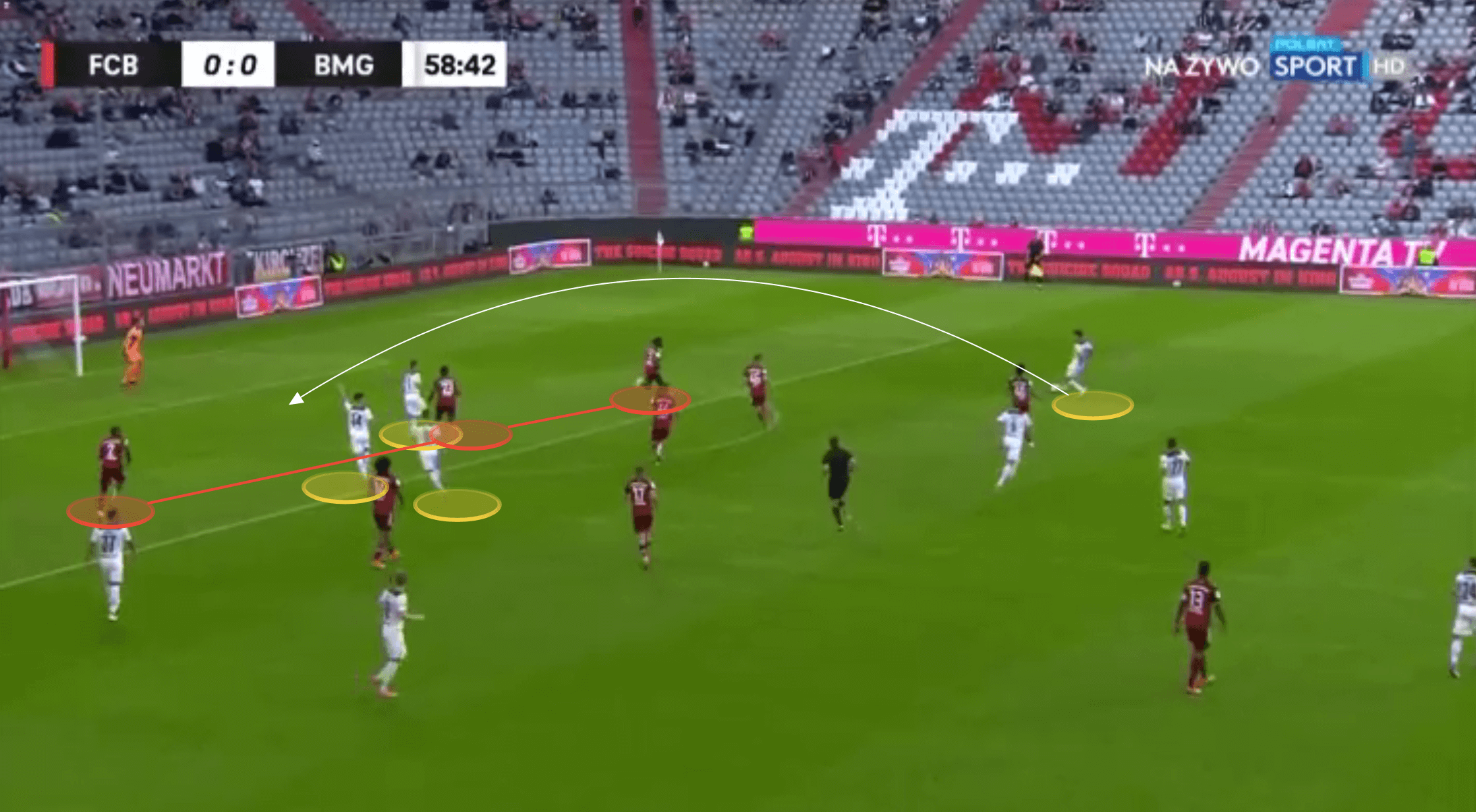 On the flip-side, Lewandowksi thrives in playing off of the shoulder of defenders and scored a goal from a similar situation against Mönchengladbach last season. With either Joe Scally or Luca Netz, both inexperienced full-backs themselves, likely to play at left-back, we may well see Lewandowski seeking to play off of them on the right-side of the box, looking to get on the end of these types of crosses. 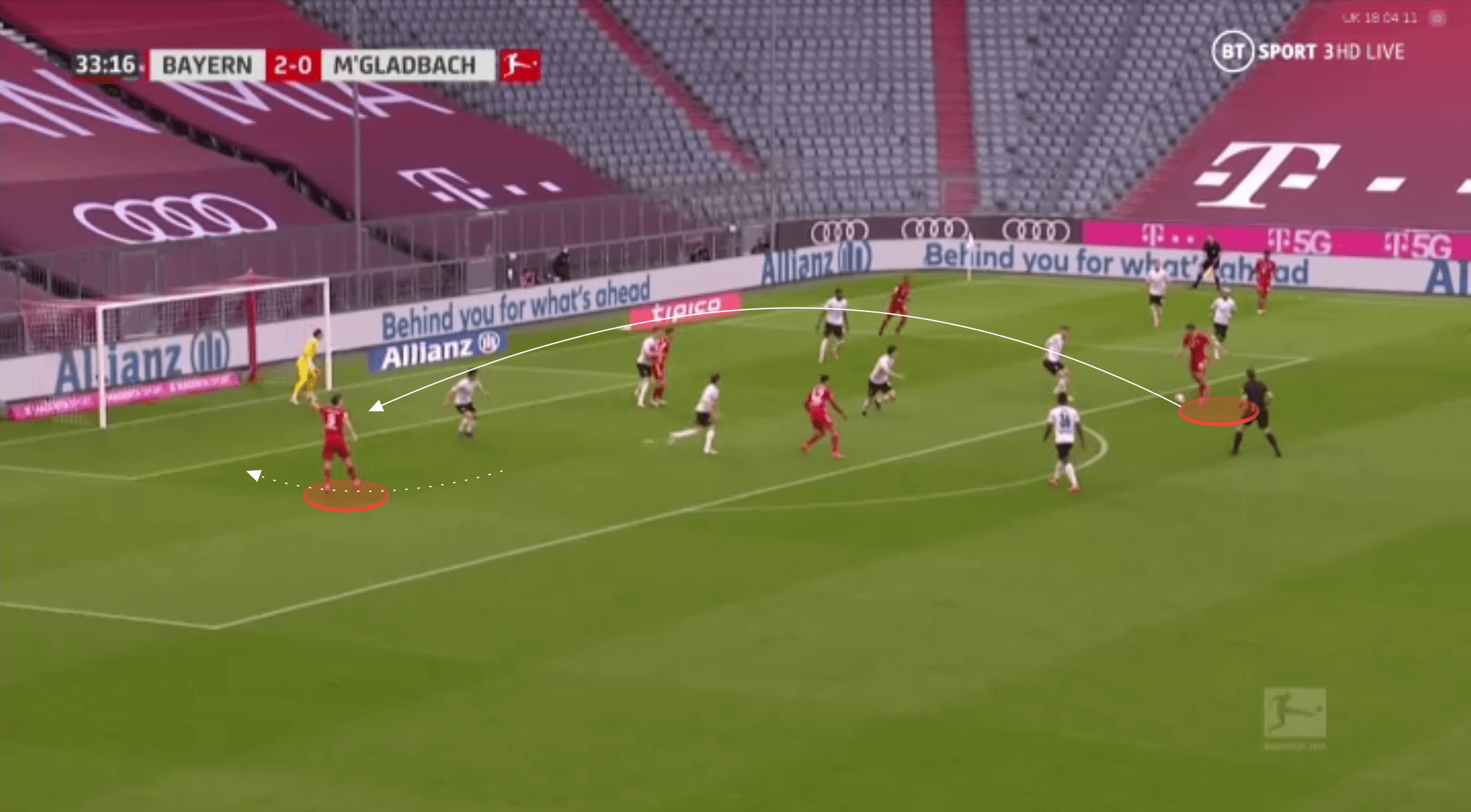 Given their win over Bayern in pre-season, Mönchengladbach will be feeling confident going into this game, but the reigning champions will have a far stronger side out, despite the absences of one or two important players. Whilst Mönchengladbach will have the home advantage, and there’s the added unknown factor with two new managers in charge, Bayern haven’t lost an opening fixture for a decade and with their side looking as strong as ever, it would be a surprise to see that trend break now. 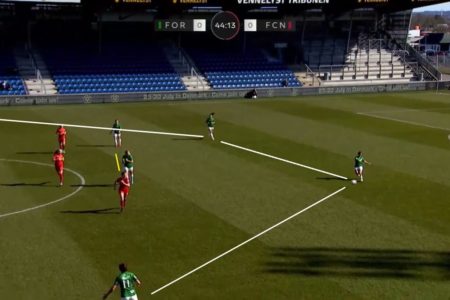 “A proven winner”: Why Fortuna Hjørring manager Brian Sørensen could be a shrewd appointment by Everton – tactical analysis