Heading into the final group stage fixtures of the UEFA Champions League, La Liga champions Real Madrid took on Borussia Mönchengladbach knowing that they must beat the Bundesliga side to progress to the next round. Borussia Mönchengladbach knew that a positive result would see them through and even a defeat could still see them reach the next round and that was exactly how it transpired.

In the end, it was relatively light work for the Spanish side as Karim Benzema scored a first half brace of headers to seal a 2-0 victory with very similar goals against the Germans, as will be touched upon later in this analysis.

This tactical analysis provides analysis of both Real Madrid and Borussia Mönchengladbach in their UEFA Champions League group stage fixture. The analysis looks at the tactics of both sides, including how Zinedine Zidane altered his team’s usual set-up to offer more intensity and exploit the weaknesses Marco Rose’s approach. 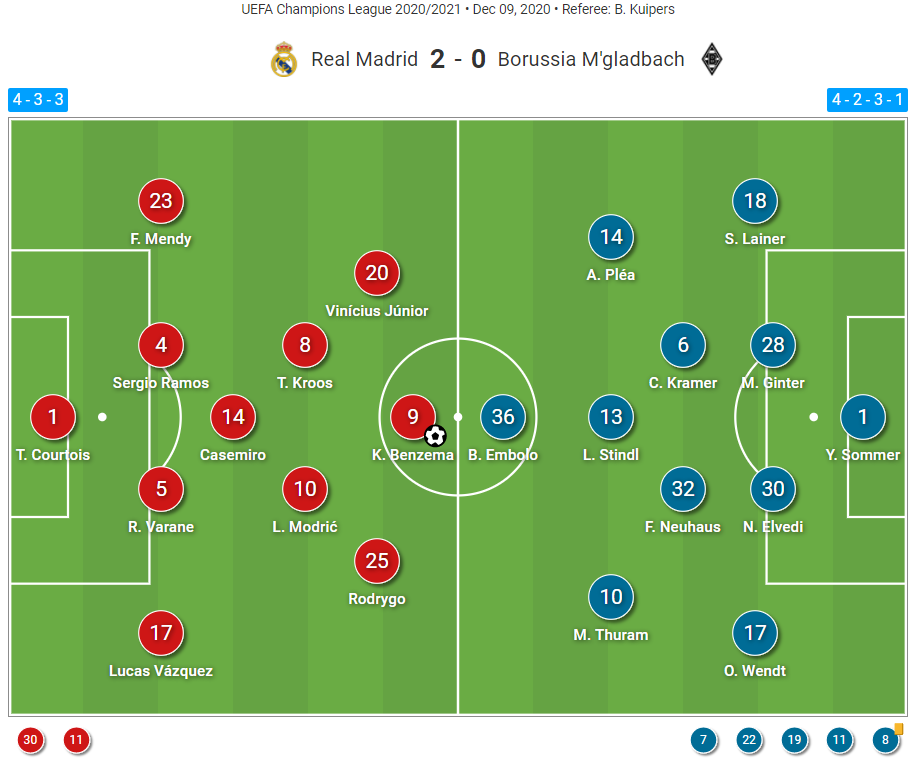 There had been hopes that Dani Carvajal would return in defence for Real Madrid but Zidane stuck with in-form makeshift right-back Lucas Vázquez. In attack, Rodrygo Goes was given a, perhaps surprising, start alongside Vinícius Júnior and Karim Benzema.

The Germans brought in Marcus Thuram after he was rested against Freiburg at the weekend, with Nico Elvedi also starting in defence as Christoph Kramer returned to his usual holding midfield role.

In order to seek to slow the pace of the game down, Gladbach looked to provide deep blocks to overload certain areas of the pitch. Knowing that Real Madrid tend to run at pace and threaten on the counter on either flank, primarily through their two Brazilian wide-forwards, they looked to overload these areas. However, the end result was that the approach was poorly executed. Rather than blocking the area up, they allowed too much space and made it easy to play out of the system and find the acres of space which consequently opened up elsewhere on the pitch. This was evident in both of Real Madrid’s goals.

In the first, the example was very clear. As can be seen here, the issue primarily comes from the fact that Kramer and Florian Neuhaus both moved across, with Alassane Plea and Lars Stindl doing so ahead of them. The result was that four of the six midfielders, alongside two defenders occupied the same side. While this does overload to deny space to the likes of Vinícius, it also meant committing all three central midfield players over to the same flank. With lax marking from Thuram, Vázquez could break forwards to find a huge amount of space ahead of him, with Rodrygo on the should to deny Oscar Wendt the option to move forwards. This eventually led to Vázquez taking two touches and delivering a cross for Benzema to break the deadlock.

A very similar situation occurred for the second goal. Only this time, the block was so narrow that it allowed the break to come down the very same flank. As can be seen here, six Gladbach players are lined up in an almost straight line, surrounding Luka Modrić on the ball. As Benzema steps deeper, he brings Elvedi with him, leaving Wendt vulnerable in behind in the full-back position. A sharp run and a neat pass from Modrić meant that Real Madrid were through. Rodrygo took on his man and again delivered a cross for the French striker to convert. For the second time in just over 20 minutes, the approach had failed to deny the space that should have been cut off.

Such sloppy errors allowing Real Madrid in could perhaps have been tolerated if it were not for failures in the marking in behind. Again, we can see similarities in both goals that were scored by the home team. Even once we look beyond the build-up that led to the cross, Benzema’s movement helped to exploit the weaknesses in the German defence to allow him to cut through them like butter with his runs to connect with the crosses from Vázquez and Rodrygo.

In this example, looking at the second goal that Benzema scored in greater detail, we can see how he looks to float in between the lines. Linked to the previous point, as the Gladbach team resets into default positions, they leave space in behind. Importantly, this image also shows how every Gladbach player on the field is caught ballwatching and with poor positioning. Particularly in midfield, both central midfield players have their back to Benzema in behind and have their feet planted. This means that with a quick turn and a cross, Rodrygo can deliver a ball and Benzema is running at pace against defenders who are backtracking.

Matthias Ginter is also caught out in defence for the same reason and is slow to react. This leaves Stefan Lainer isolated and having to decide whether to track Benzema’s run and try to get ahead of him, or cover for Vinícius coming in behind. The split second of hesitation allows Benzema to steal a march and position himself superbly to convert the header. Such gaping holes in their defence is what would go on to cost Gladbach dearly in this encounter.

In order to provide full context to how Gladbach set themselves up and to understand why a team usually so well-organised could make these mistakes, it’s important to look at the very first few minutes of the encounter. Real Madrid began the tie with incredible intensity in the pace of their movement of the ball, their aggression in the tackle and, in particular, with their pressing. Zidane’s side are not famed for their high press, but it is a tool which they have in their locker and have been known to use in crucial fixtures, as this one proved to be.

At times, the press was so intense that we saw Real Madrid change their shape to a 3-4-3 shape, almost unheard of under Zidane. This came from the way in which Modrić and Toni Kroos pressed so high that they effectively joined Benzema in the front three to close the gaps between the four-man defence from their German rivals. To fill the gaps that they left behind, Vinícius and Rodrygo dropped to act as midfield players in deeper positions than they would usually occupy, while Raphaël Varane stepped up into midfield alongside Casemiro to deny Stindl space to operate in and to form a midfield block of four.

While it left the back three of Vázquez, Sergio Ramos and Ferland Mendy more vulnerable, they did become narrow and also found themselves unoccupied as Gladbach sought to play their way out of the press from deep positions. Long passes could have played out of this set-up, but Gladbach produced just 7.2% of their passes as long balls.

Real Madrid’s European expertise has vanished this season. From their usual experience and maturity, they have looked a shambles. In this encounter, they turned up when it mattered. They were clinical to expertly cut through the flaws in Gladbach’s system and left them exposed without so much as having to break a sweat. With high intensity, they unsettled the visitors and put them on the back foot, forcing them into making sloppy, basic errors. They were the kind of errors which Rose’s side have avoided all season in the Champions League. This was more like the kind of performance we have come to expect from Zidane’s Real Madrid.