This Saturday, the Stadion An der Alten Försterei hosted a tightly contested fixture between the two Bundesliga teams, Union Berlin, and Bayern Munich. This tactical analysis will take a closer look into both side’s tactical setup, and why it ended up as a stalemate.

Union, led by Urs Fischer, have experienced a pleasant run of form so far this season. The coaches’ tactics have aided the side to a decent 6th place in the league at the time of writing. In this analysis, we will break down how they managed Bayern’s elite attack and how they approached their opponent’s defensive structure.

Bayern Munich, managed by Hansi Flick, have somewhat stuttered in recent Bundesliga fixtures, displaying a defence simply not as watertight as it was for a long period of last season. In this analysis, we will explore where they struggled to find their way through Union’s counter-pressing setup, and what approach they took to prevent their opponent’s best-attacking players cutting through. 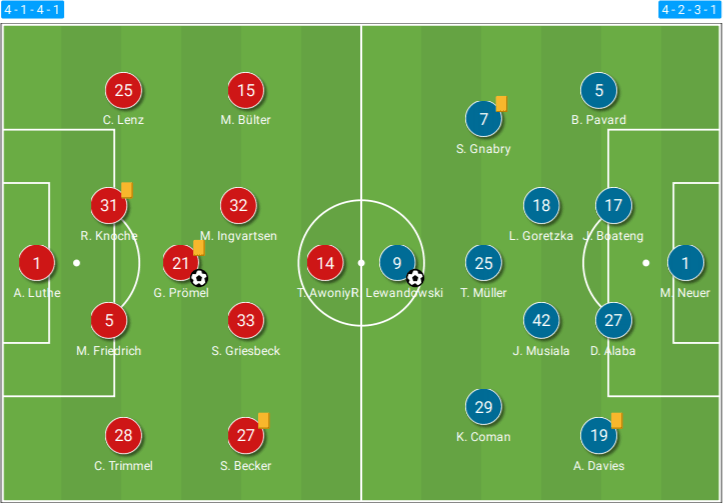 Fischer has been contending with injuries to a couple of key men in the attacking unit lately, namely Joel Pohjanpalo, and Max Kruse, who has experienced somewhat of a renaissance this season. Due to this and the quality of their opposition, Union rolled out in a 4-1-4-1 formation, with only one out-and-out forward in the side.

Flick has been dealing with injuries at the other end of the field, with Joshua Kimmich, Javi Martínez, Niklas Süle, and Tanguy Nianzou all suffering niggles as of late. This game saw a few changes from the midweek fixture, with the likes of Bouna Sarr and Marc Roca stepping out for Pavard and Musiala to replace them in this game. We also saw a return to their most frequently used forward line.

Union’s compact nature in defence should not come as a surprise by this point. In any of their formations, they sit tight out of possession, and in this game, Prömel would sit in front of the back four, shuttle, and protect the channels, occasionally dropping deeper into the defensive line.

This would see a 5-4-1/4-1-4-1 formation in the defensive phase of play. As they gain a foothold in possession, their positions stretch wider to emphasise play down the half-spaces. They began this game at an electric pace, gaining possession of the ball in the midfield, and sending long balls down the channels to create chances. 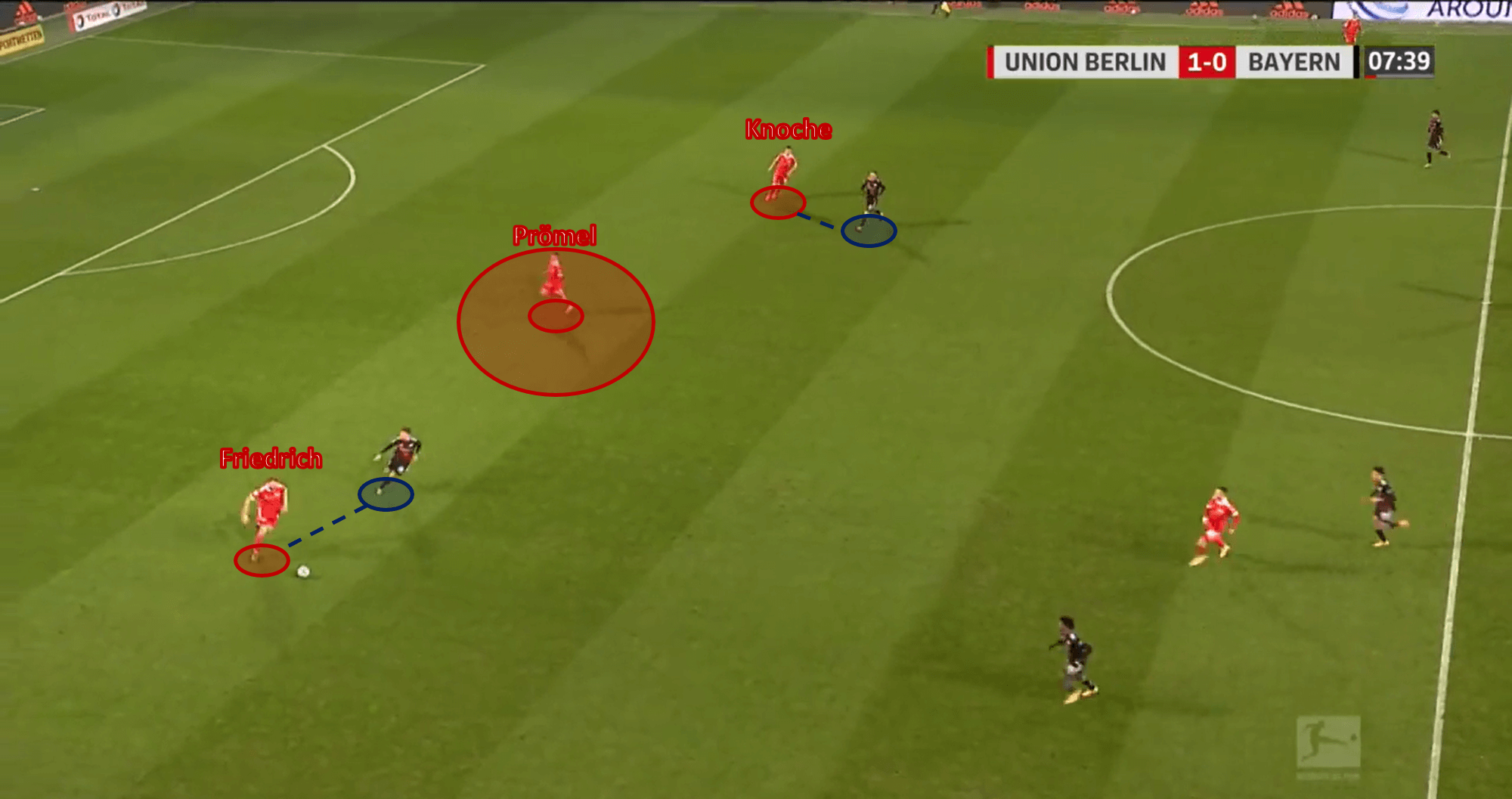 You can see that Bayern’s press is not too intense at this moment, but Prömel has still dropped into space to provide a passing option centrally.

Though, Union did not waste time passing sideways in their half against Bayern. Rather, Fischer’s men looked to operate the ball within the half-space, looking to find the run of Awoniyi or one of their wide men. This worked especially well when the pass was angled from right to left, look to exploit the space in behind Boateng, who was caught in a high position a few times early on. 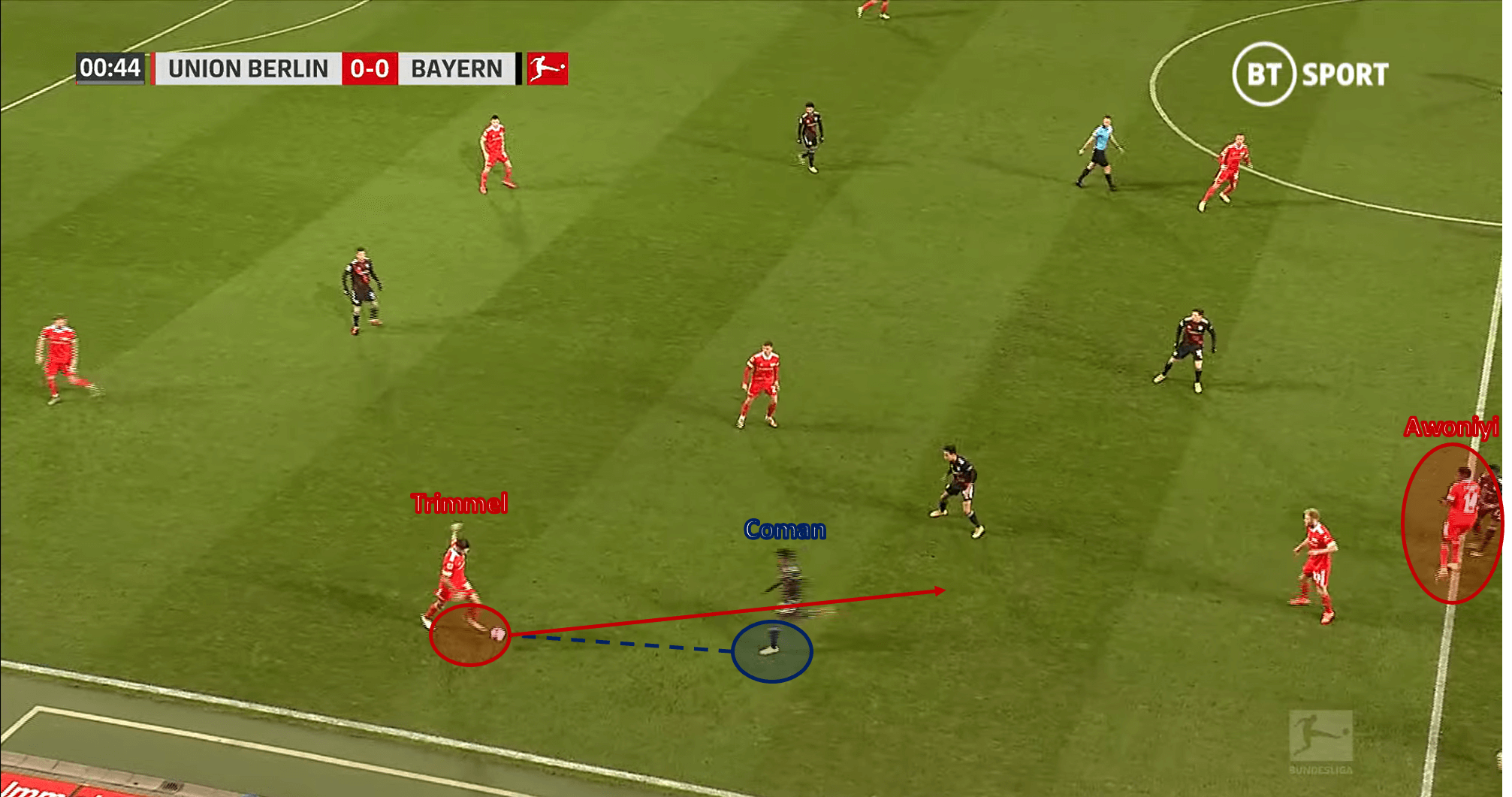 Trimmel, down the right flank, retrieved the ball in the midfield and aimed for Awoniyi who is spinning in behind Alaba. 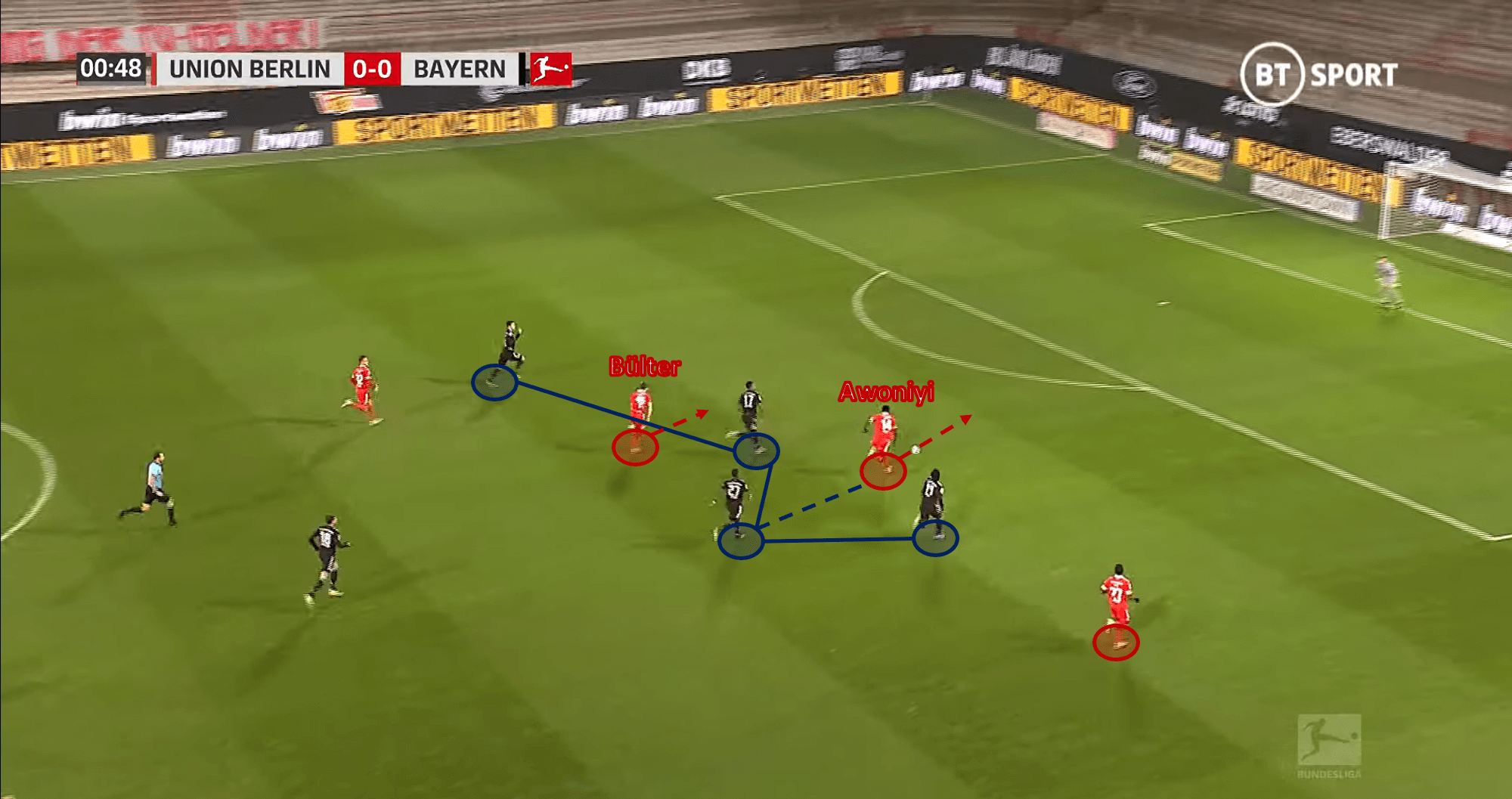 Once the ball is played through, Awoniyi is through beyond the defensive line, with only the keeper to beat, he places his shot just wide.

For two teams who have a heavy preference to cross into the penalty area from wide, it was shocking to see so many chances spawned through the centre of the play. Bayern operated with a high line against a team who are not typically renown to be quick on the break, but they suffered from Awoniyi’s pace, who provided Union with an incredibly useful outlet on goal. 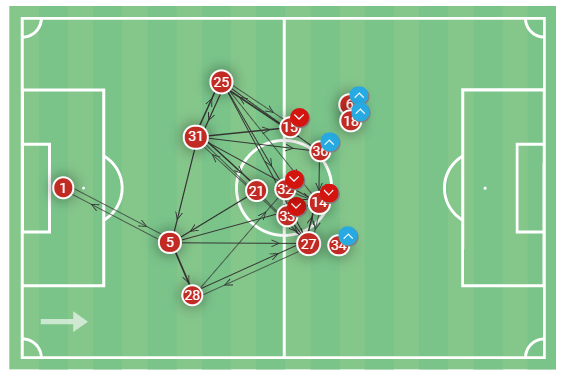 Union’s performance in this game was not unlike ones we have seen from Ralph Hasenhüttl’s Southampton in the Premier League, perhaps not in their intense pressing approach, but their vertical, ambitious passing play was reminiscent. It relied less upon the interplay of their forwards like you would see in their 4-2-3-1 formation with Max Kruse at #10, but more upon the pace of Awoniyi beyond the opposition’s defensive line. 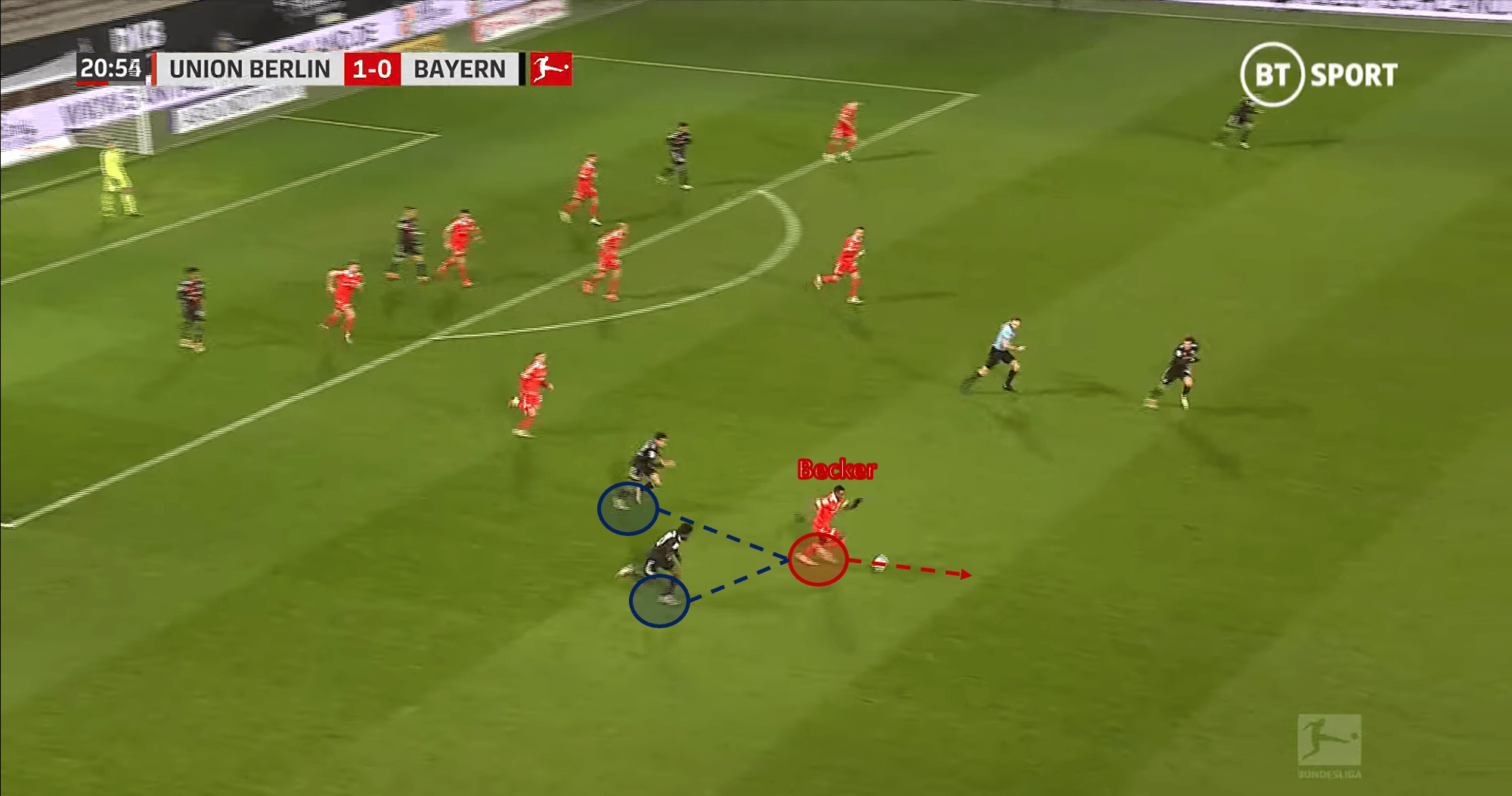 After a Bayern attack, the ball is offloaded to Becker, who carries the ball down the channel, progressing it up the pitch from his half. 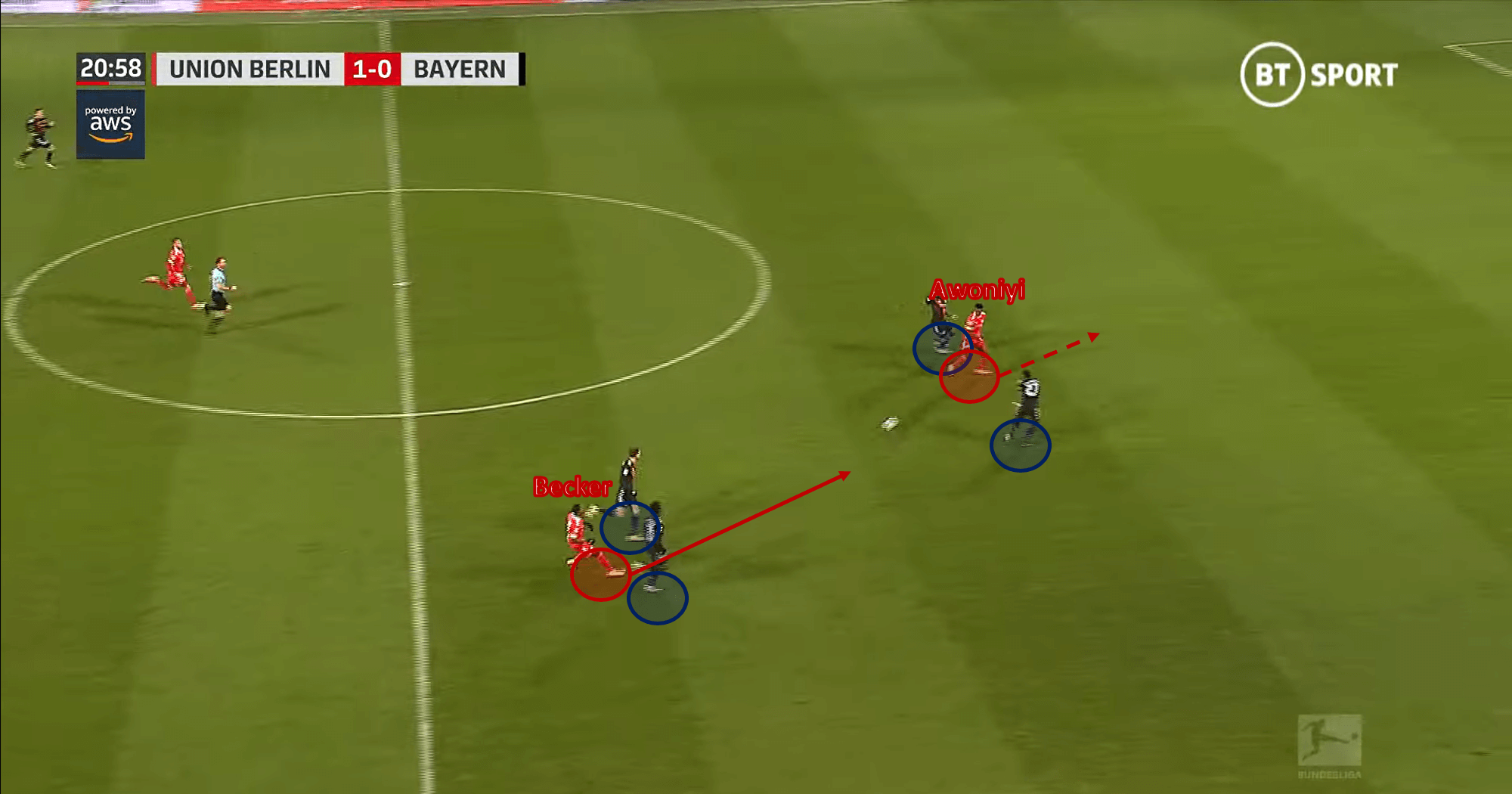 Threading the needle as it were, Becker plays the through pass in between two sets of two Bayern players to find Awoniyi in behind again, who unfortunately misses another chance just wide of the post.

This was a pretty common sight throughout the first half, and it was Union’s main method of chance creation during this period. Union only managed 33% of the possession for the entire game, but they did more with their time on the ball than their opponents did with theirs, to put it simply. Their passing accuracy was 70% as a team, which admittedly is not the best regardless of playstyle, however, their vertical passing play was fairly effective.

Awoniyi managed 0.8 xG in this game, indicative of his threatening runs and zones which he was able to take a shot from. He can count himself unfortunate not to score the winning goal in this game. He ran the channels expertly, and his blindsided runs were particularly effective against Alaba and Boateng. His movement in behind was incessant, and Bayern arguably should have adapted to this as the game went on, as it did not stop.

Union had a handful of opportunities from set-pieces in this game, and they took advantage of these. Trimmel over a dead ball has been excellent for some time now. All eight of the Austrian’s assists last season came from set-piece situations (six from corners and two from free-kicks), which is a fantastic return from right-back.

Now, an excellent delivery is nothing without excellent movement, and thankfully Fischer’s men are well drilled in set-piece scenarios. From corner situations, Union will situate themselves around the edge of the box, all lined up to attack different sides of the penalty area. The intended target will remain largely stationary when the cross is sent in, while the other teammates will make distracting runs to create space for the headed effort. 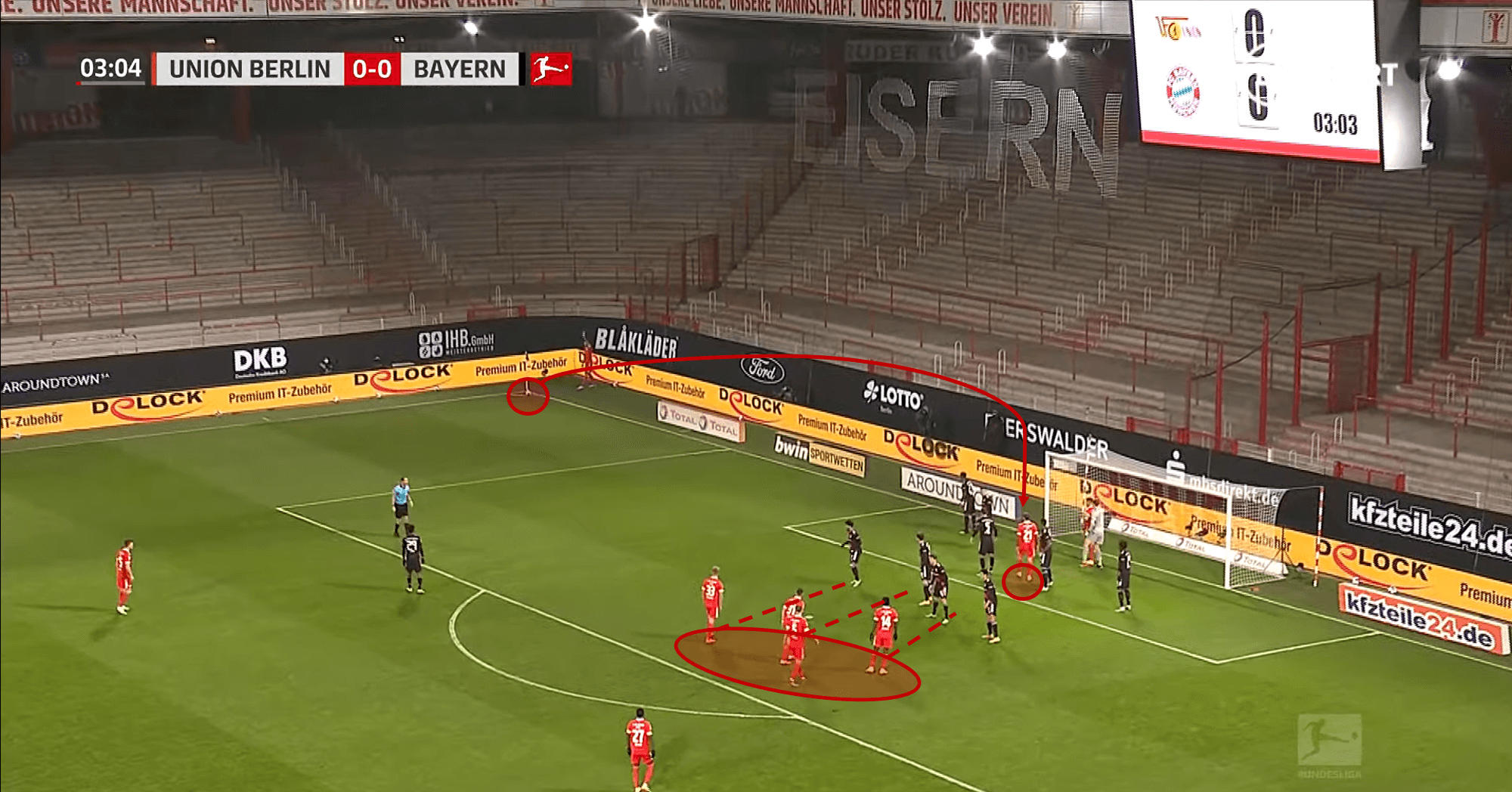 We can see Union’s approach from a corner here. Four men are on the edge of the box, waiting for the delivery to be sent in, before running at different points of the box. 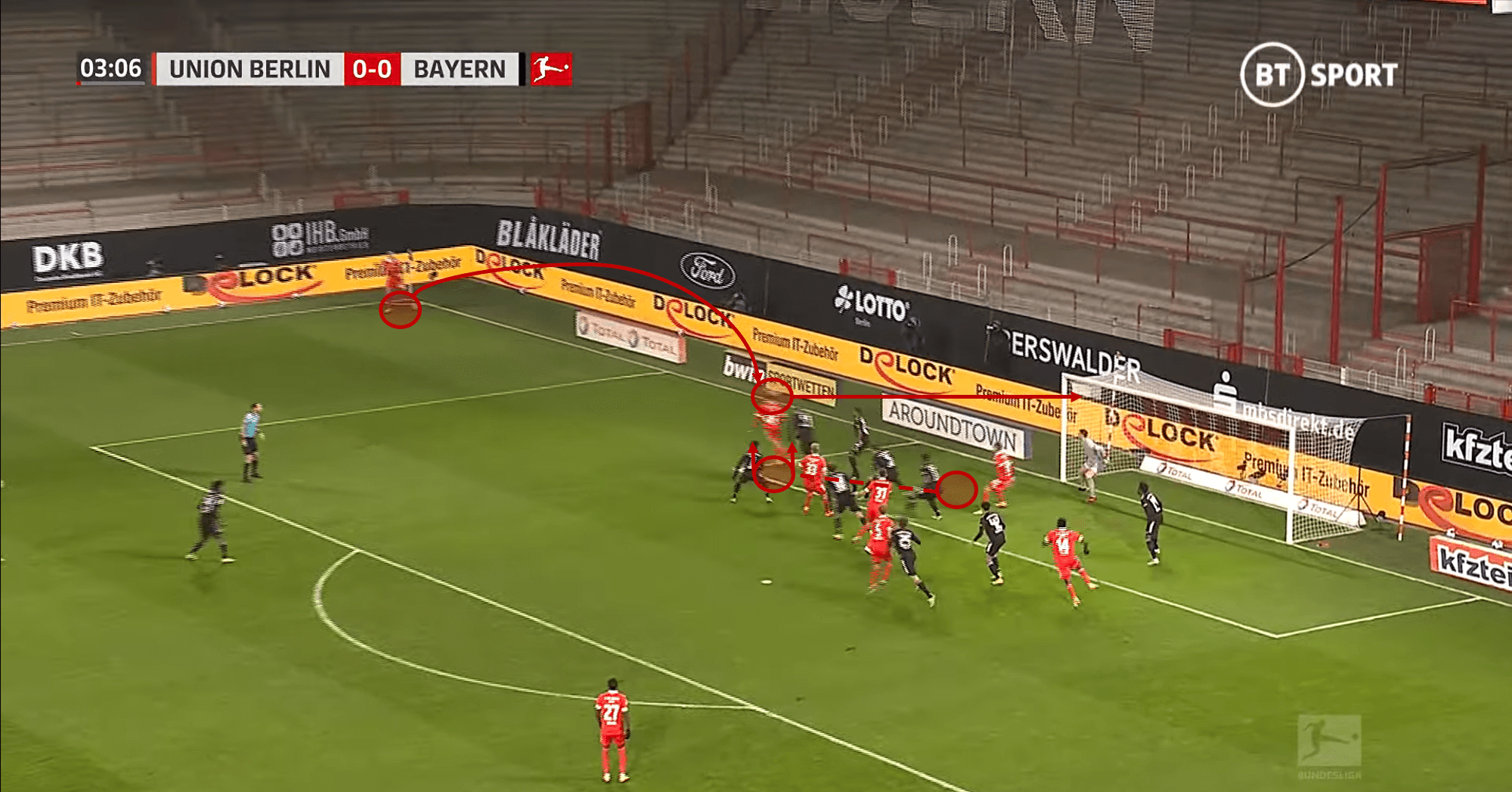 Prömel moves towards the ball as the delivery is sent in, sending a glancing header into the top corner.

However, this was not the only set-piece routine they had from corners. They would alternate between different routines which were relatively similar, but the intended target would switch around. So, instead of aiming for the man inside the six-yard-box, Trimmel would strive to find one of the runners from deep instead. 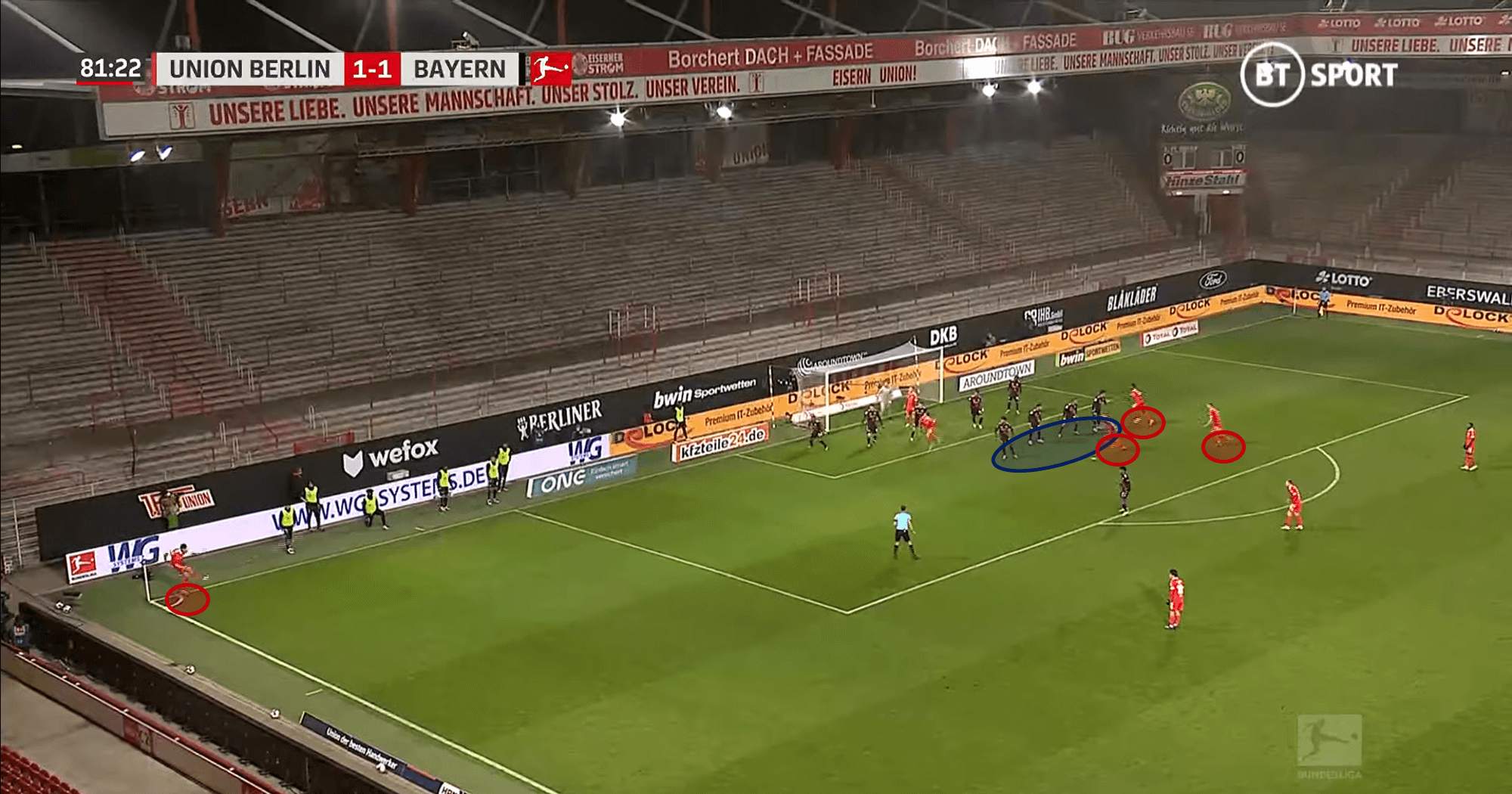 In this corner, Bayern have clearly set a four men in a band to prevent Union’s runners. This inhibits Union’s ability to create space inside the box for the two men inside the six-yard-box. 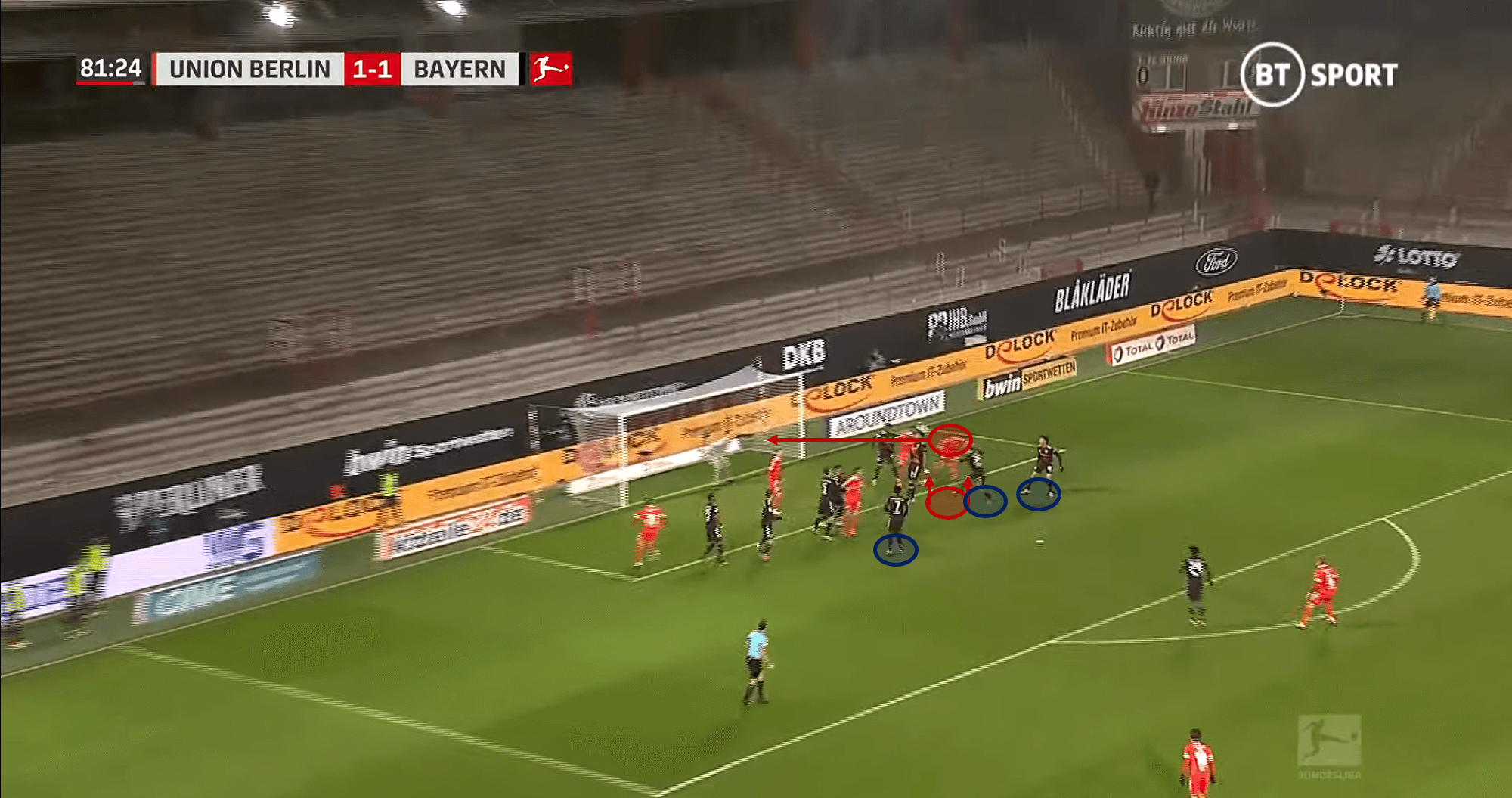 Floated in, the ball reaches the leap of Knoche, who ran from the edge of the box towards the six-yard area and manages to outreach Bayern’s men to gain a solid opportunity on goal.

There were a couple of other opportunities in this game just like this from wide free-kick as well. Union are a side who play for set-pieces, and rightly so. They have a wonderful set-piece taker in the form of Trimmel, and their coaches have worked extremely hard to create an effective unit who can attack set-piece plays with conviction. As such, they are one of the most prolific teams in Germany from set-piece plays.

Flick’s men managed to hold 67% of possession in this game, but only forged 12 shots out their time on the ball. This is a rough return for a side with the attacking quality that they have. Without Kimmich’s poise at the base of midfield, they seemed to struggle to find any gaps in Union’s defensive structure, which is a credit to Fischer and his coaching staff as well.

A midfield pairing of Musiala and Goretzka did not seem to work in the grander scheme of things. As we discussed earlier, Bayern getting caught out of possession was partly due to these two as well, who both love to make late runs from deep into the final third. When in possession, it seemed as if they had no conviction in their passing decision to progress the ball forward. 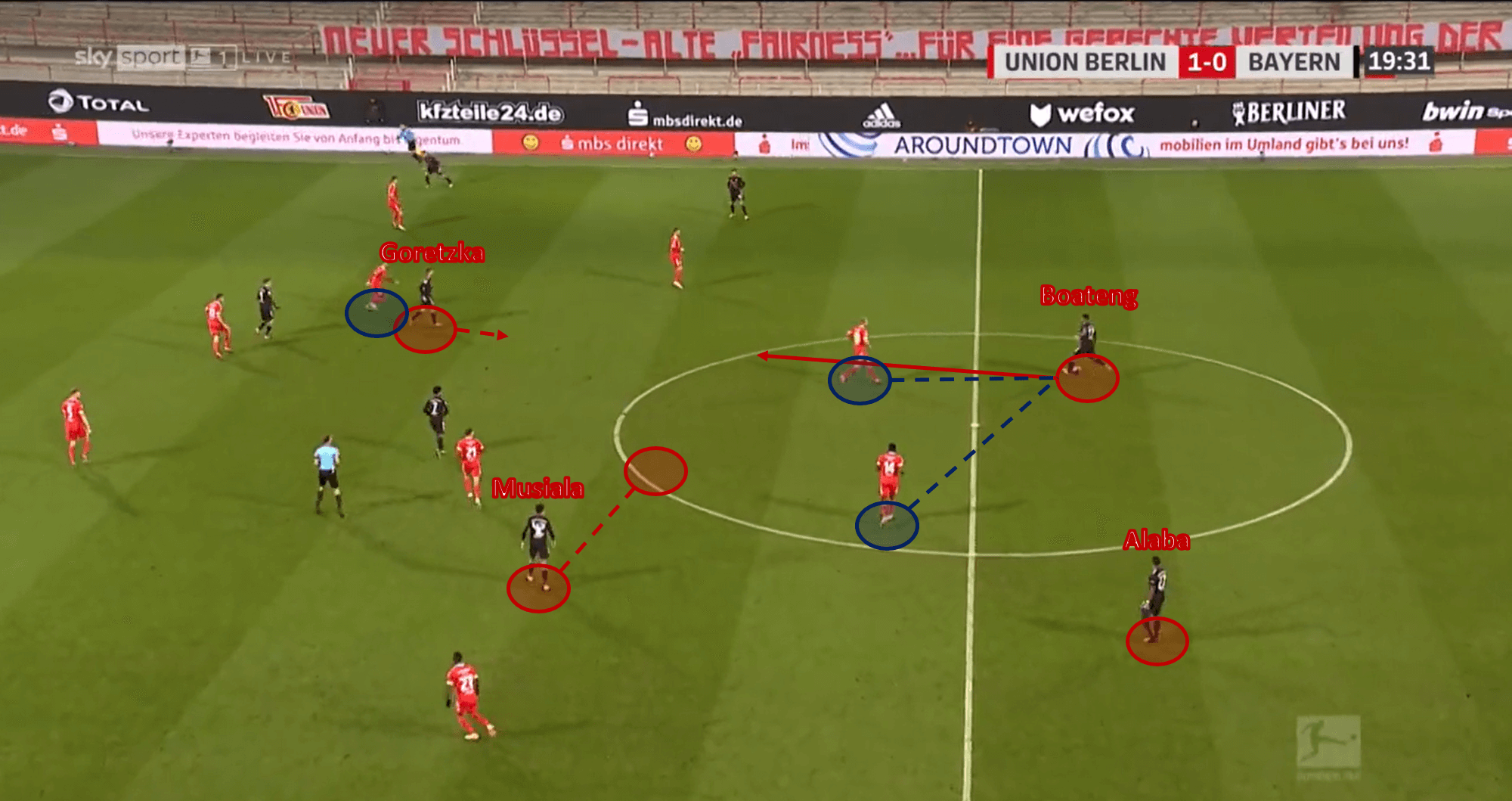 On the ball, Boateng is looking to play the ball into the midfield, however, Goretzka has positioned himself quite high up the pitch. In this scenario, the deeper midfielder (Musiala), should drop into space and provide the passing option. 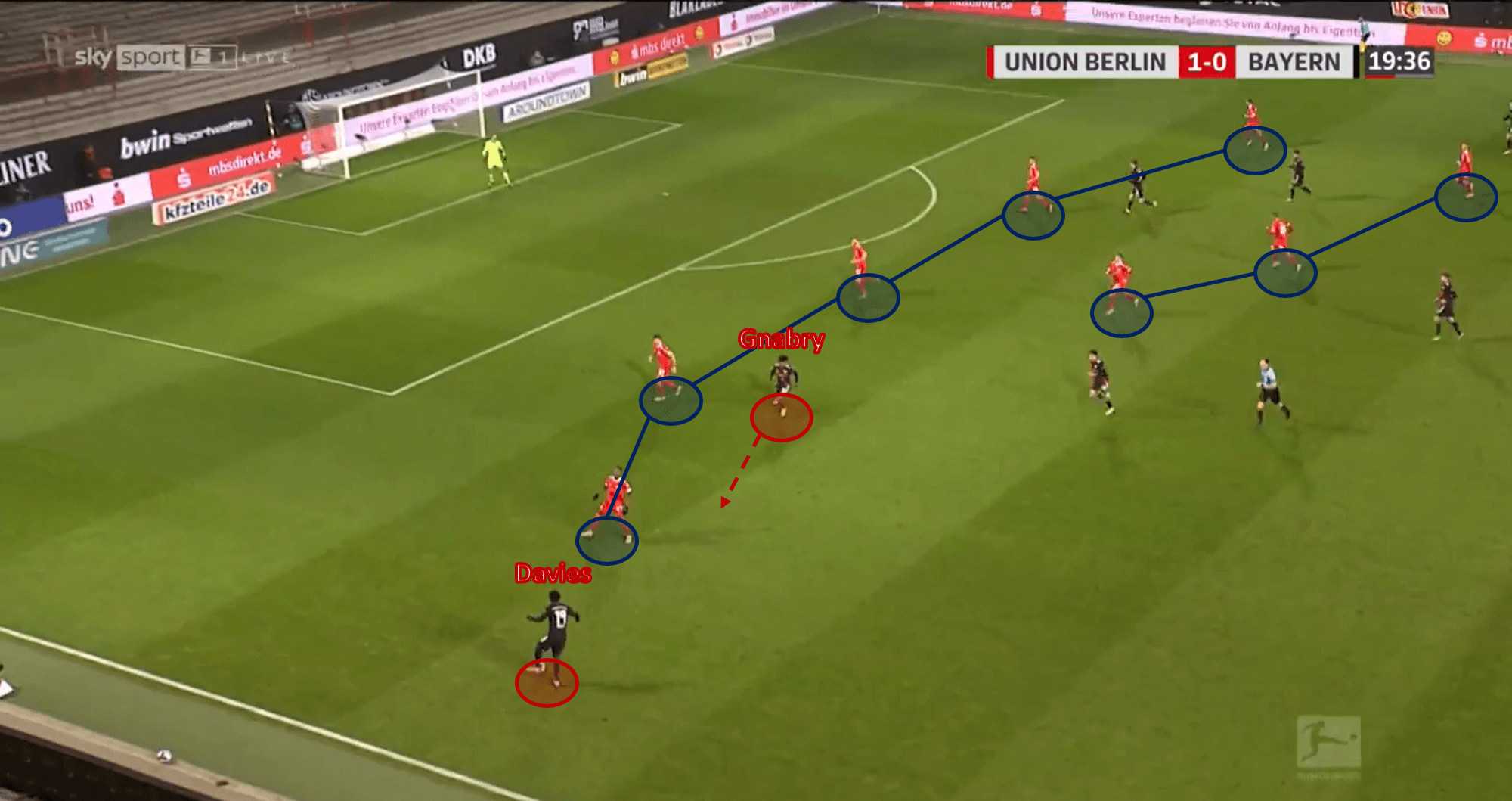 The ball reaches Davies out on the left-wing, but as Goretzka had to drop deeper and find him, Union had time to sort out their defensive structure and move to a back five system, blocking off a lot of passing lanes.

Bayern did have a few moments of genuine threat, which were forced down the middle of the pitch. They were aware of Union’s lack of pace and attempted through passes with frequency. These were not as effective as they had hoped, however, due to Union’s compact defensive structure.  In the moments they were through on goal, they were wasteful with these opportunities. 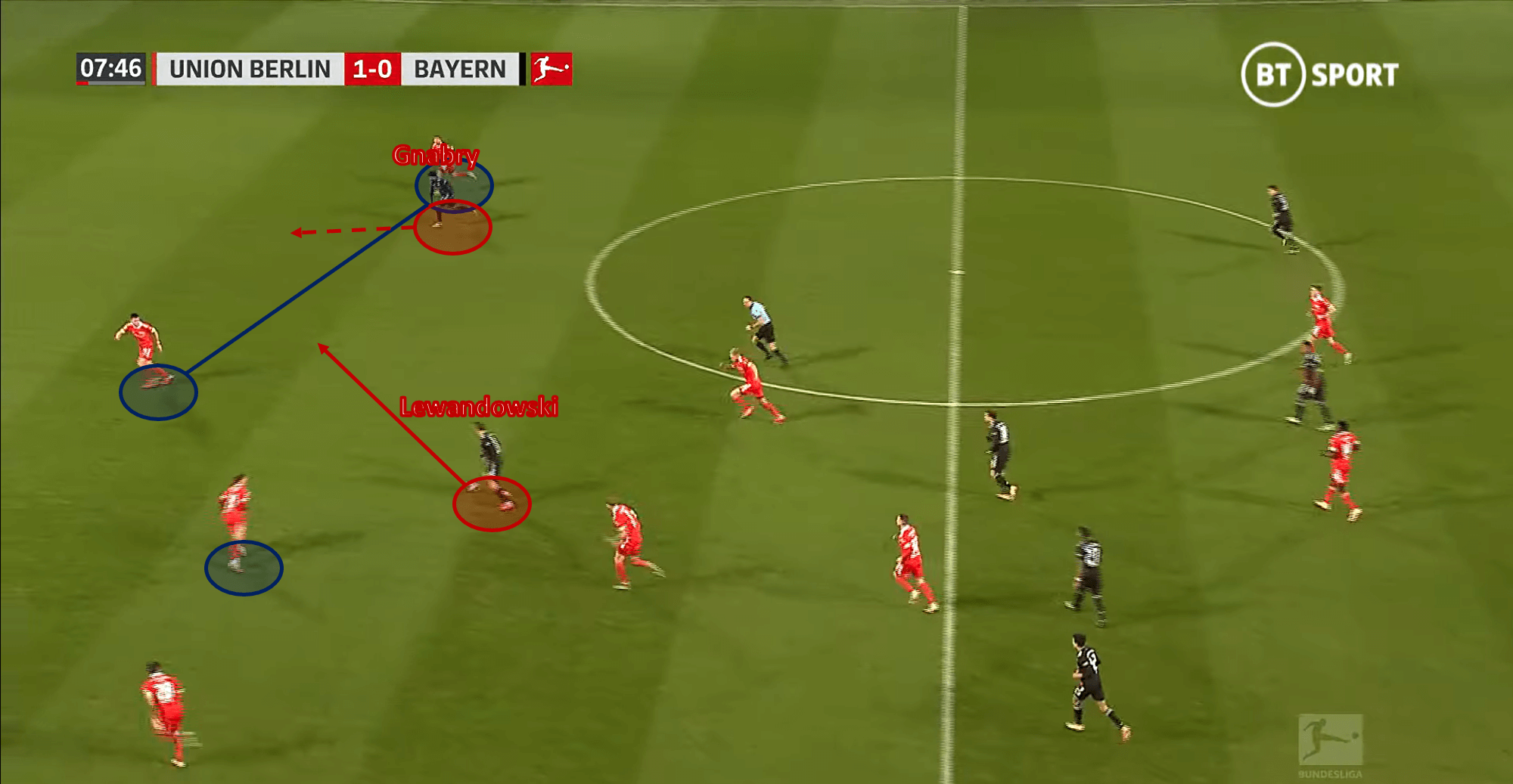 Lewandowski has dropped deeper to receive the ball, with space in between the two Union centre-backs to send a pass through to Gnabry. 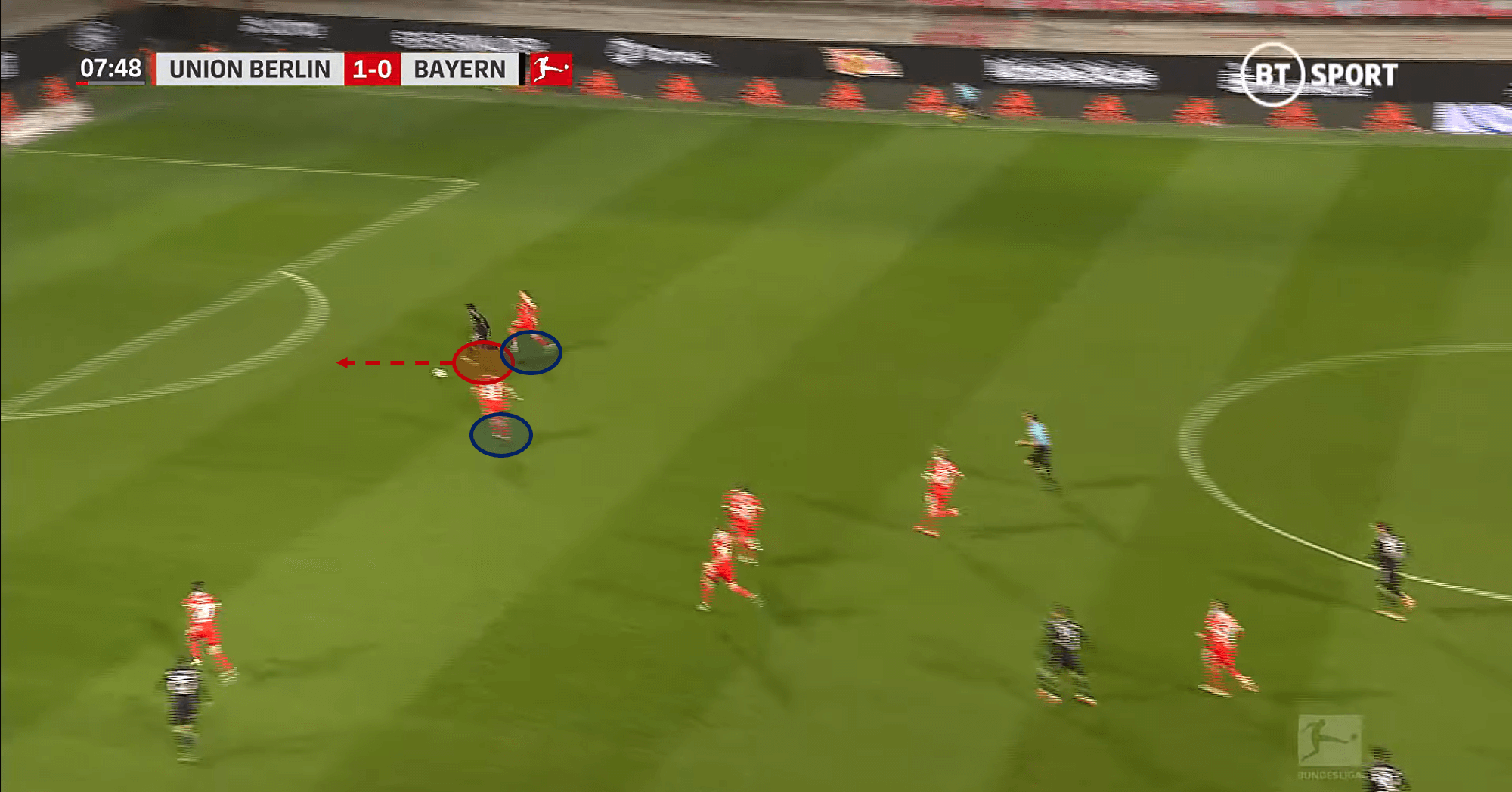 Gnabry’s first touch is horrendous and sends the ball past the goal line, which can go down as a badly missed opportunity.

This was a game full of moments. Both teams missed good opportunities in the match, but it is slightly more understandable on Union’s behalf, given the quality of their players, and the significance of this game for them. Bayern did not create enough chances to warrant a victory in this game regardless, and the missing presence of Kimmich in the midfield has been truly felt in recent weeks, only increasing his reputation as an individual. 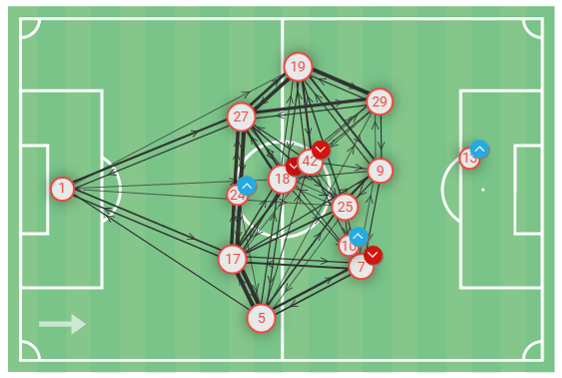 Ultimately, Union just edged out Bayern in terms of whole team performance. They worked diligently in and out of possession to keep Bayern at bay and create opportunities of decent value. The xG metric had this game down as 1.4–0.9 in favour of the home side, and the eye test backs up that statement.

Fischer can take a lot from this game. His side went toe-to-toe with the toughest team in the division and even bettered them for periods of the match. Even with Kruse out, he used Awoniyi’s best attributes to brilliant effect, and he should be applauded for doing so. In Flick’s case, he will simply be eager to Kimmich back involved as soon as possible, as Bayern’s tempo build-up is not the same without him.