In the 12th game week of the 2020-21 Premier League season, Everton hosted Chelsea at the Goodison Park in front of the fans for the first time in 9 months in an important fixture for both the teams. Everton have been winless in their last two games while Chelsea are coming back on an impressive win against Chelsea last weekend and also while securing the group in the Champions League.

This tactical analysis focuses on the tactics deployed by both the managers and how they tried to outplay each other. Let’s begin the analysis.

Everton lined-up in their usual 4-2-3-1 formation this season with Gylfi Sigurdsson starting in the CAM role. Mason Holgate and Ben Godfrey were deployed as the make-shift full-backs after injuries to Seamus Coleman and Lucas Digne in the recent weeks. 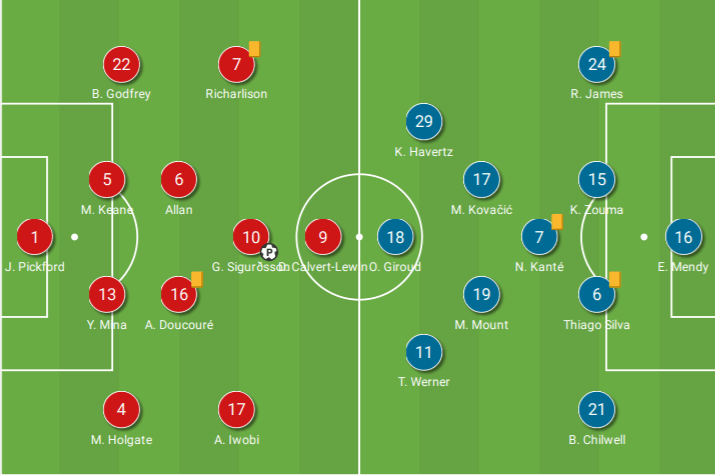 Chelsea made just one change from their 3-1 win against Leeds last weekend with Havertz coming in place of Ziyech. The rest of the team retained their place as Lampard look to extend his winning ways.

Giroud starting as the target man was tasked with the roles similar to the other traditional number-9. Frank Lampard in recent months have heavily relied on Giroud’s hold-up play and ability in the air as a weapon to break down defences. Giroud would often drop and drag a defender with him. This space vacated by the defender would be immediately occupied by a winger mostly Timo Werner in such cases. The example has arrows signifying the opposite movements by the forwards. Again, in this case, Giroud held the ball very well and played it to Kovacic, whose first-time pass to Werner was mishit. There were some arbitrary issues with Chelsea’s buildup that has surfaced in the past matches but has never looked like a big picture. In this game, it was evident that they struggled to play out from the back and a partial reason was because of their weak positional play. Chelsea usually tried to play out using wings where they lure the opposition to the press and hit an over-ball down the wings to their wingers.

In this game, they played Havertz in the wing after an injury to Ziyech. The issue with their positional play is evident in the image below, as we can see all 3 players Havertz, James and Zouma in the wide region with no one staying closer to them in the half-space nor acting as a figure centrally. The closest to them was Kante who was getting marked by Sigurdsson. The black oval is the place where either Havertz or any other player should have dropped as that would leave Sigurdsson in a 2v1 situation. Kovacic was also nowhere to be found in the frame and with all the players vertically aligned and no one parallel to each other formation of triangles was very difficult. 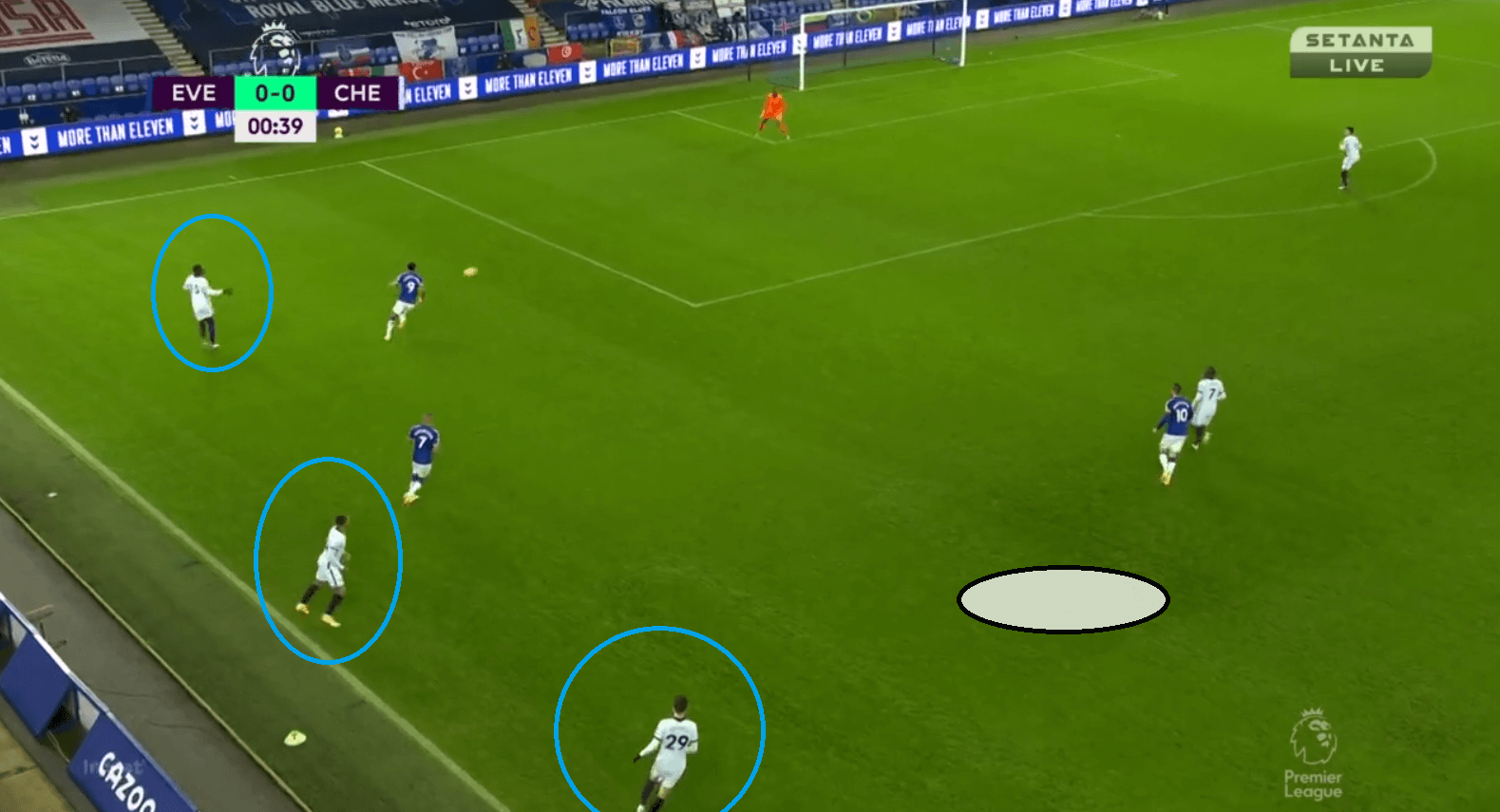 But soon they rectified it by asking the midfielders to drop often in the half-space. Which would leave the likes of Iwobi, Sigurdson and Richarlison to defend in a 2v1 situation where Everton would struggle to force turnovers. In the example below, Mount has dropped deep and this forces Iwobi in a 2v1 situation against Chilwell and Mount. As Iwobi moves closer to Mount, Chilwell has an open flank to run down as Werner now occupies central-space leaving Holgate but no option but to stay close to him. A long ball from any of the Chelsea players was on and a successful one could have caused them issues. 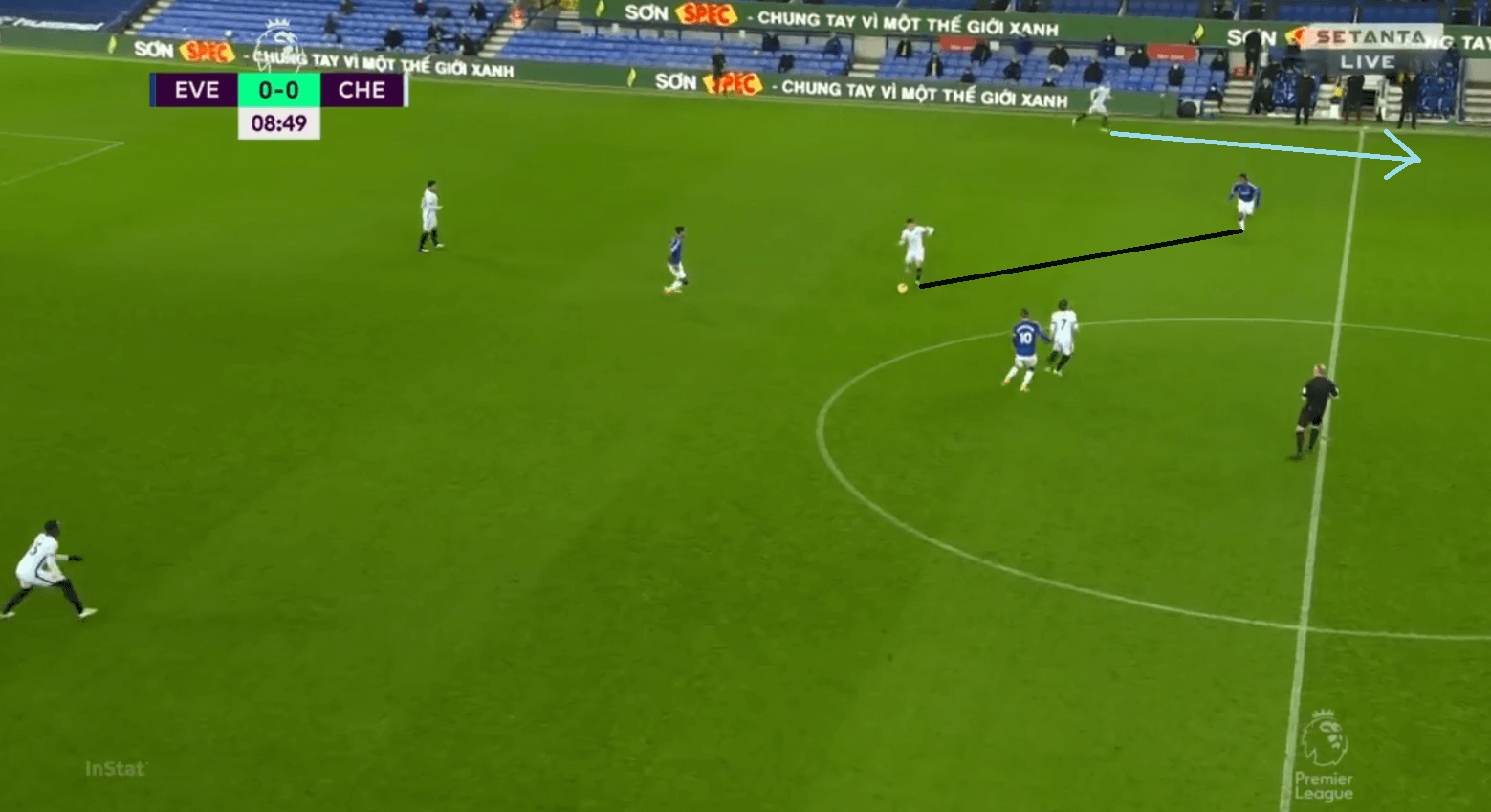 Flexibility has been an important aspect in their possession this season. The forwards would stay central and narrow the defenders to open the wide regions for the full-backs. While they also look to stretch the defence by staying wide and open the channels between the full-backs and the centre-backs. The example below shows a good example of that. Havertz and Werner position on the outside of the full-backs and when Havertz receives the ball he has two options depending on the player making a run. If it was a midfielder like Kovacic, he would stay wide and pass the ball to Kovacic as he makes a run into the channels. While in Reece James’ case he would cut inside, drag the full-back too and slide the ball as James would make an overlapping run with no man-marking him. 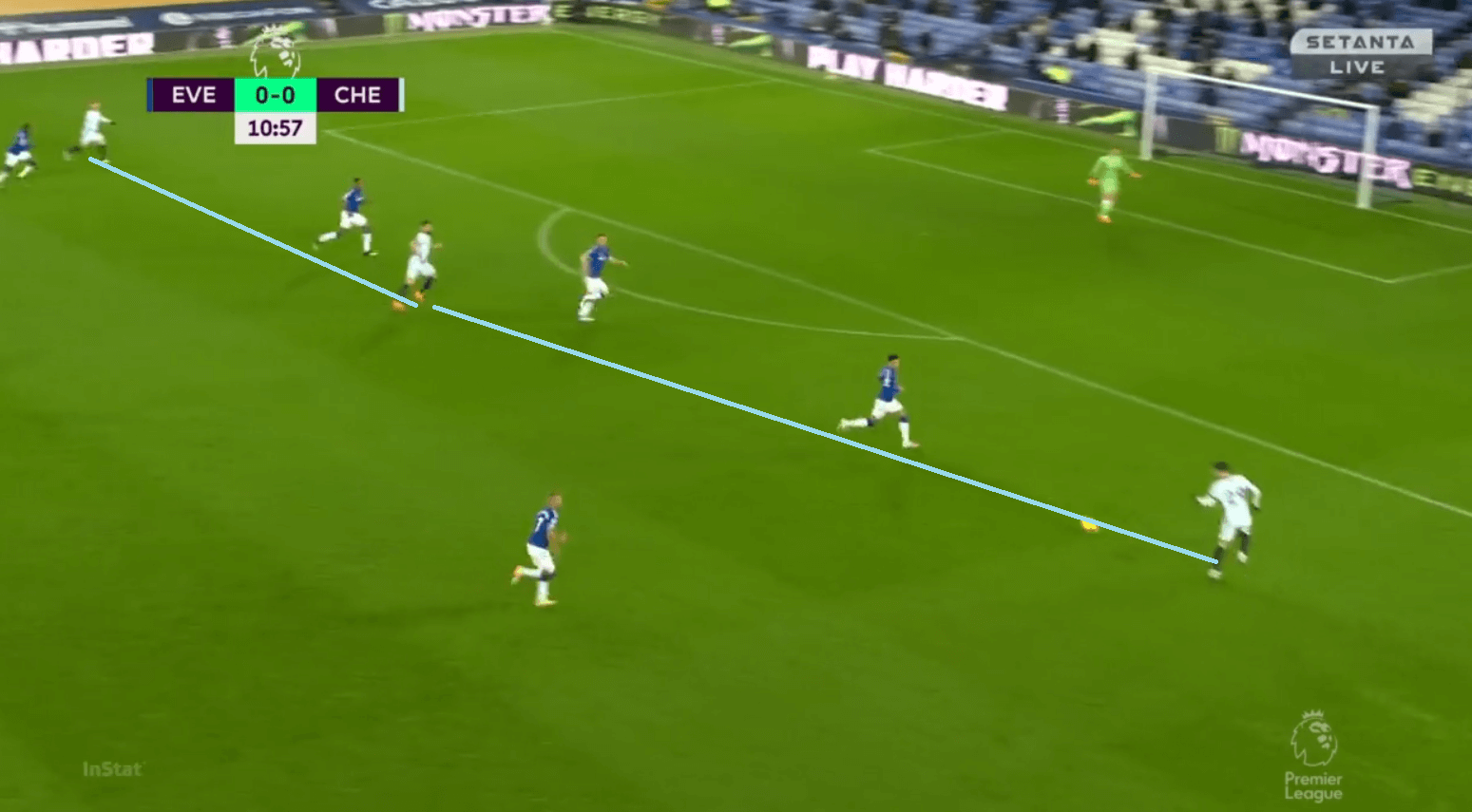 Chelsea’s 2-3-5 system below is similar to Manchester City’s title-winning team in 2018 and 2019 where they used a similar setup having an inverted full-back and an overlapping full-back while the forwards/wingers stay very wide. 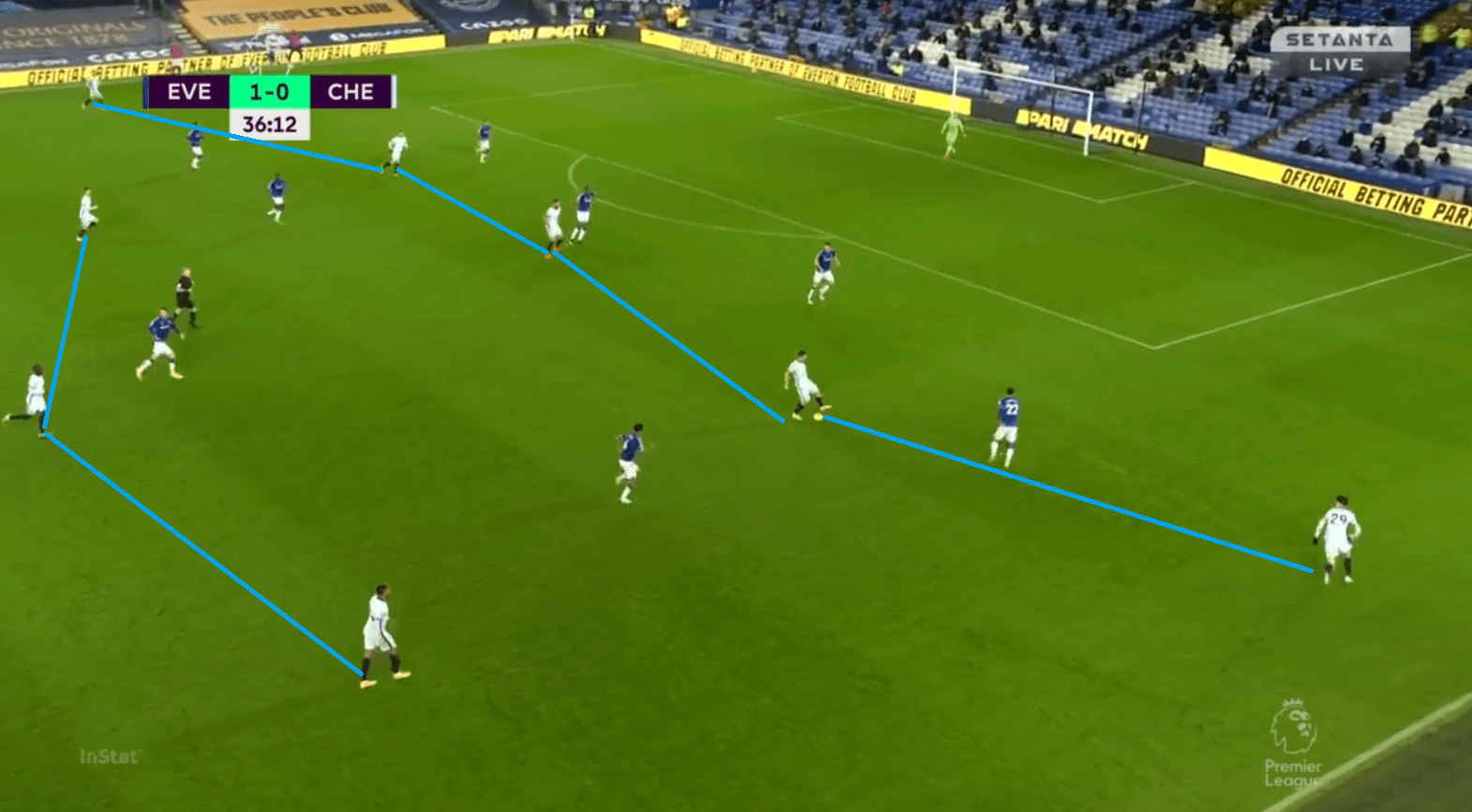 Throughout the season, Chelsea have always followed the same pattern in the building. They start from their right flank with good positional play from the likes of Reece James, Ziyech (in the previous games) and Kovacic. Then they shift the ball to the opposite flanks to much better shooters like Mount, Werner and Chilwell (who has chipped in few goals this season). The stats also tell the same as 48% of their attacks came from the right side but none of their shots taken was from that flank. Whereas they used the left-flank to build only 28% of the time but around 56% of the shots from there.

Everton defended in a 4-2-3-1 formation with Calvert-Lewin tasked with the sole job of pressing the centre-backs while Sigurdsson marked Kante tightly to stop the centre-backs from passing to the Frenchman. 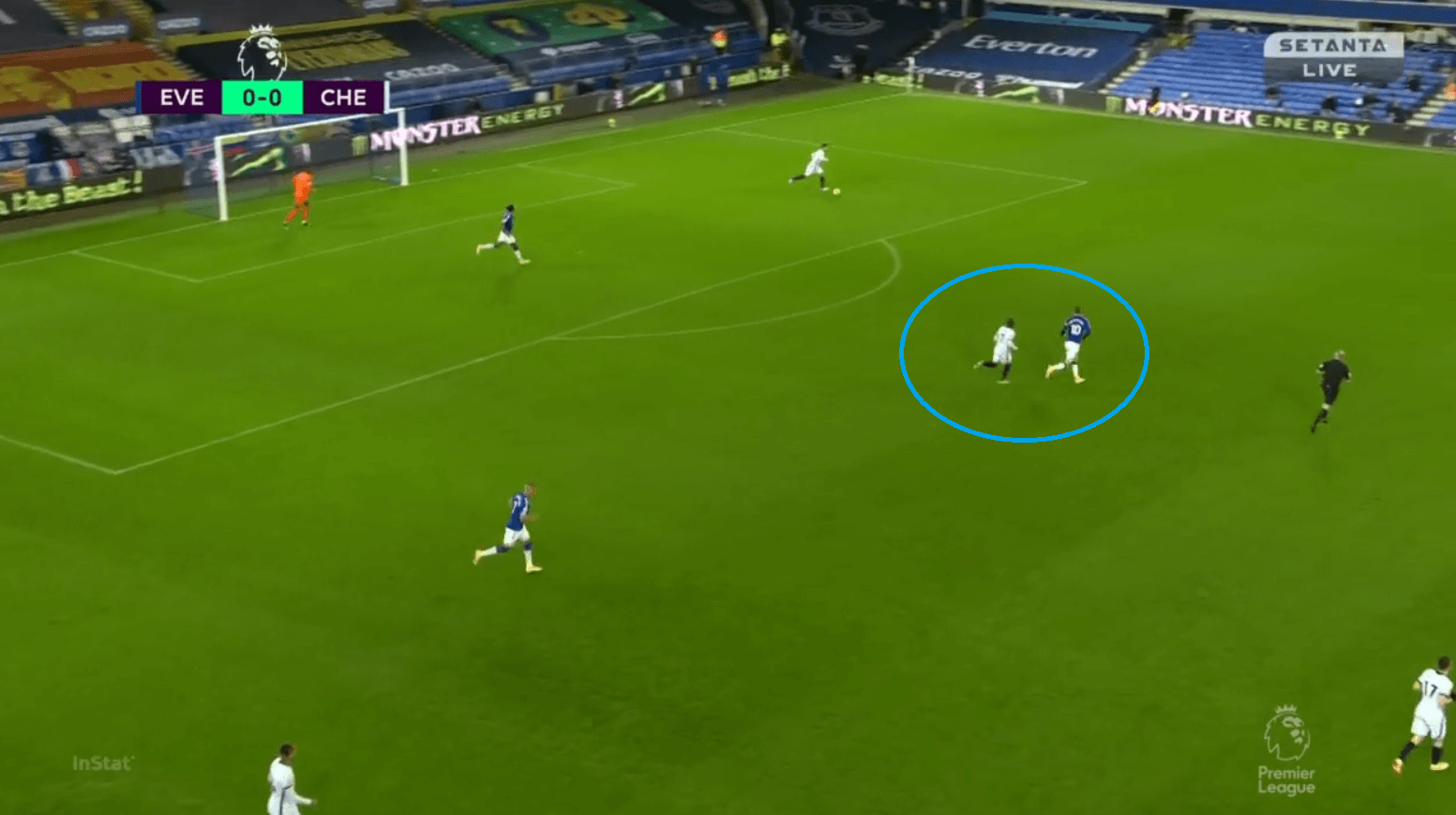 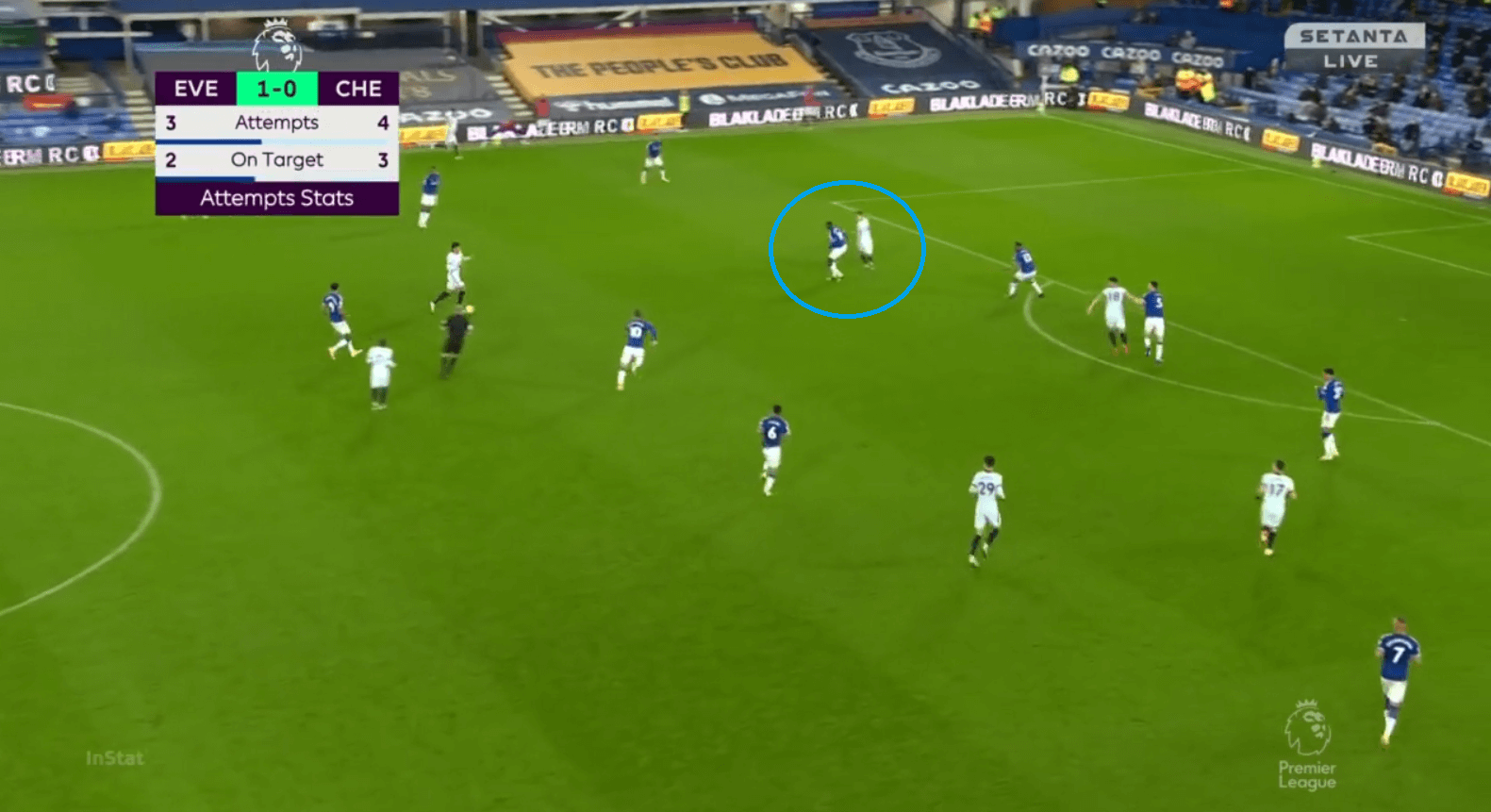 In the second half, Frank Lampard made a small tactical switch in the second half. He decided to drop Kante in between the two centre-backs as the third one. This then directly made Mount and Kovacic drop as double pivots. The Everton pivots had no choice but to press them since if only one of them had pressed it would leave him in a 2v1 situation. With the pivots now going high, Havertz began to drop in between the lines and find spaces. The example below shows him dropping and finding the space in between the lines. But due to his overall performance being poor Havertz couldn’t impact the game as he would like to. 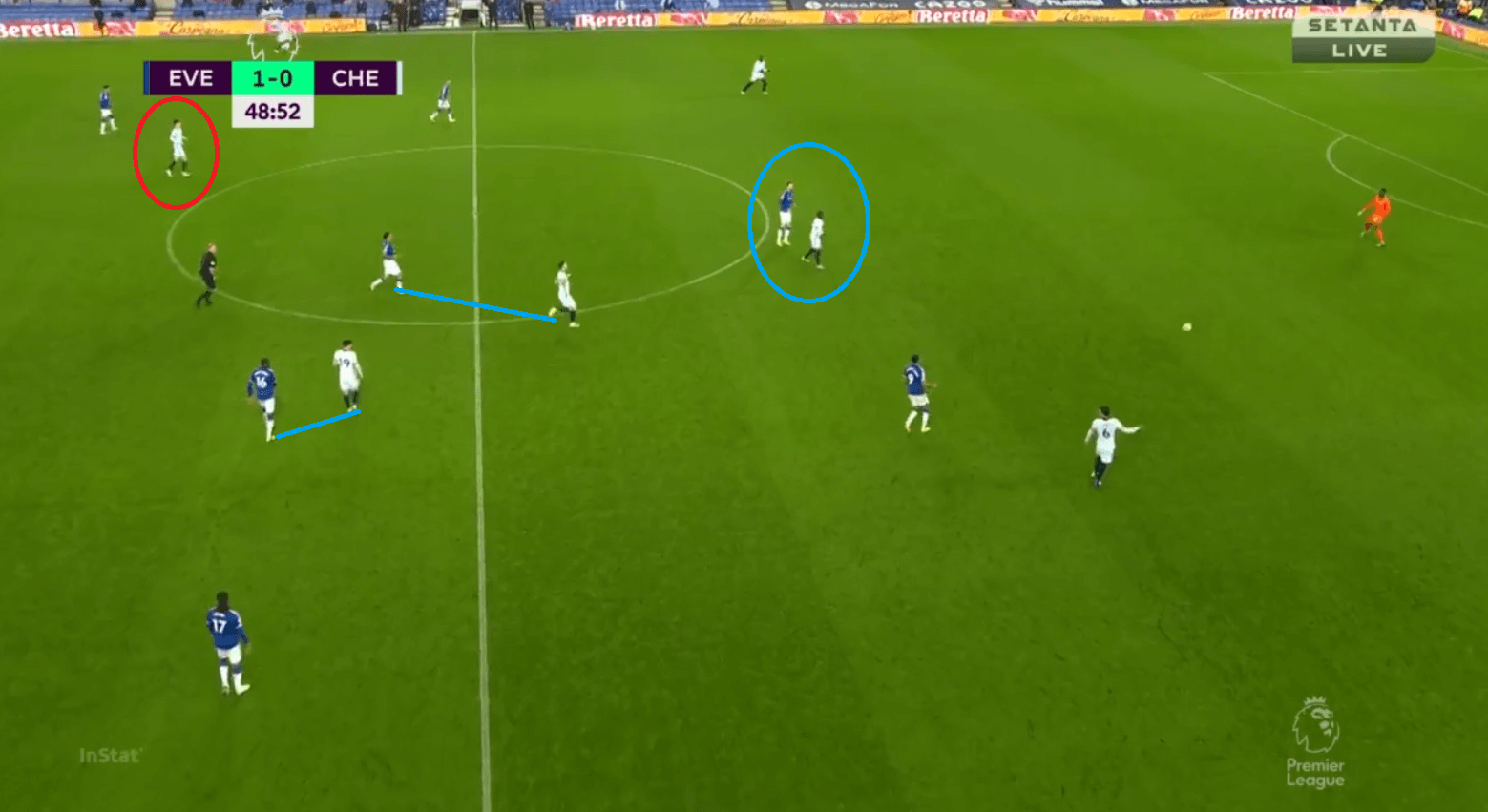 Everton in this season have been one of the most direct teams in the league. They have attempted the 5th most long passes in the league this season with a total of 1204 of them. They used Calvert-Lewin as a target man and with Pickford having a good passing range, he would launch a ball just before the attacking-third. Everton in the example below create a 2v1 against Mason Mount and the ball is deflected to a third-man (Iwobi)  behind them. Eventually, this direct approach and Calvert-Lewin’s physical presence helped win Everton a penalty from which Sigurdson converted to give Everton the lead.

Sigurdson, like a proper CAM, was looking to drop in between the lines and made himself available as an option. Due to the presence of Calvert-Lewin and Richarlison on the left-flank, the Chelsea players couldn’t follow Sigurdson much. The example shows Sigurdson intelligently dropping into the space vacated by Kovacic when the Croatian unnecessarily pressed Allan as Allan was already taken care by Giroud. 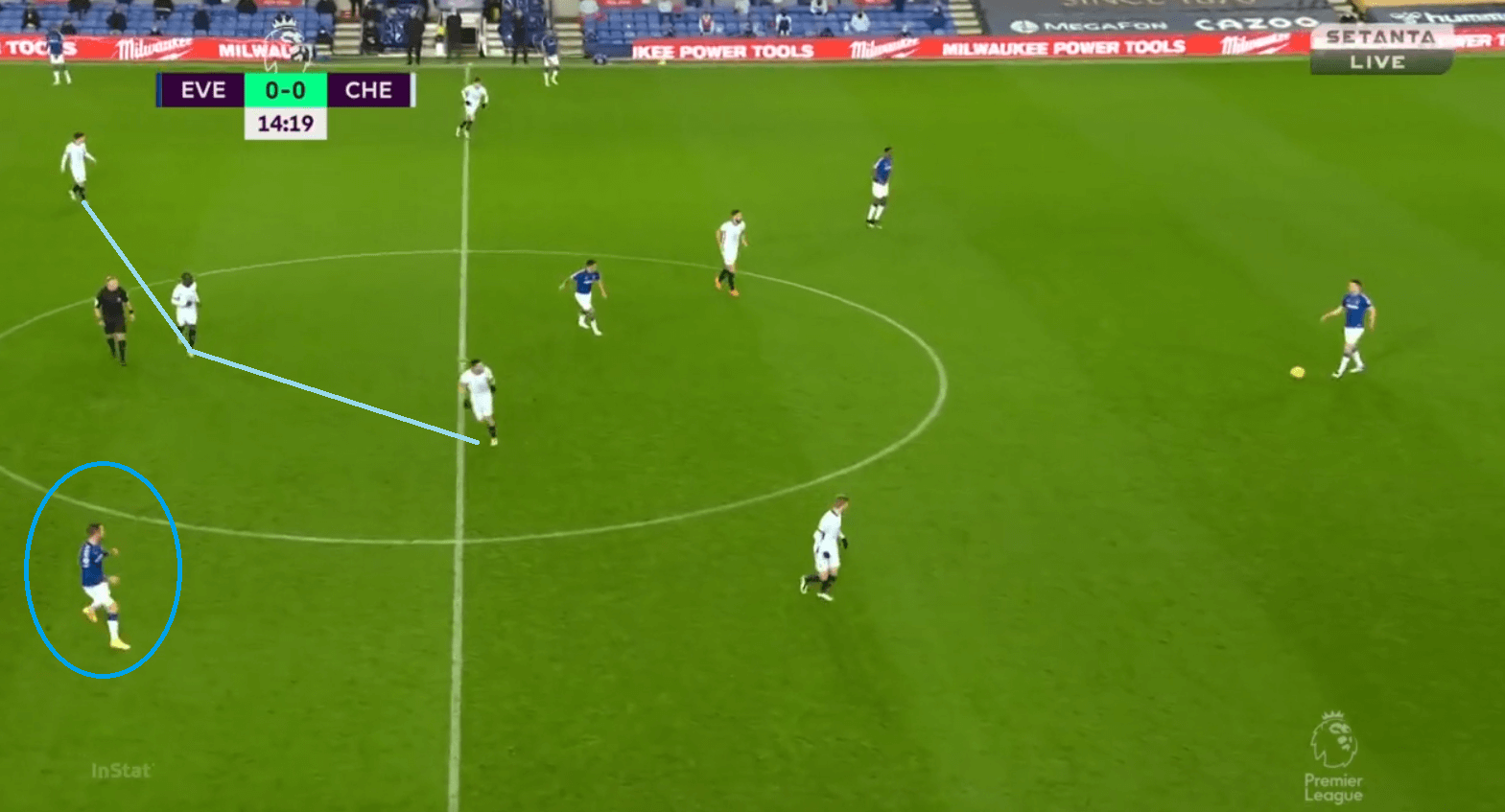 Their 4-2-3-1 shape-shifted into a 4-1-4-1 shape when they had the ball. Doucoure joined Sigurdson higher up the pitch and would position himself in the right half-space. This was a great strategy by Ancelotti since Chelsea tend to leave a lot of space in between the lines and Ancelotti wanted to make good use of it. The presence of James Rodriguez could have either increased the potential success of Ancelotti’s tactics or Chelsea could have also been more proactive given the Colombian presence. But his absence was an advantage to Everton as Chelsea’s go-easy attitude on Sigurdson put them under threat. 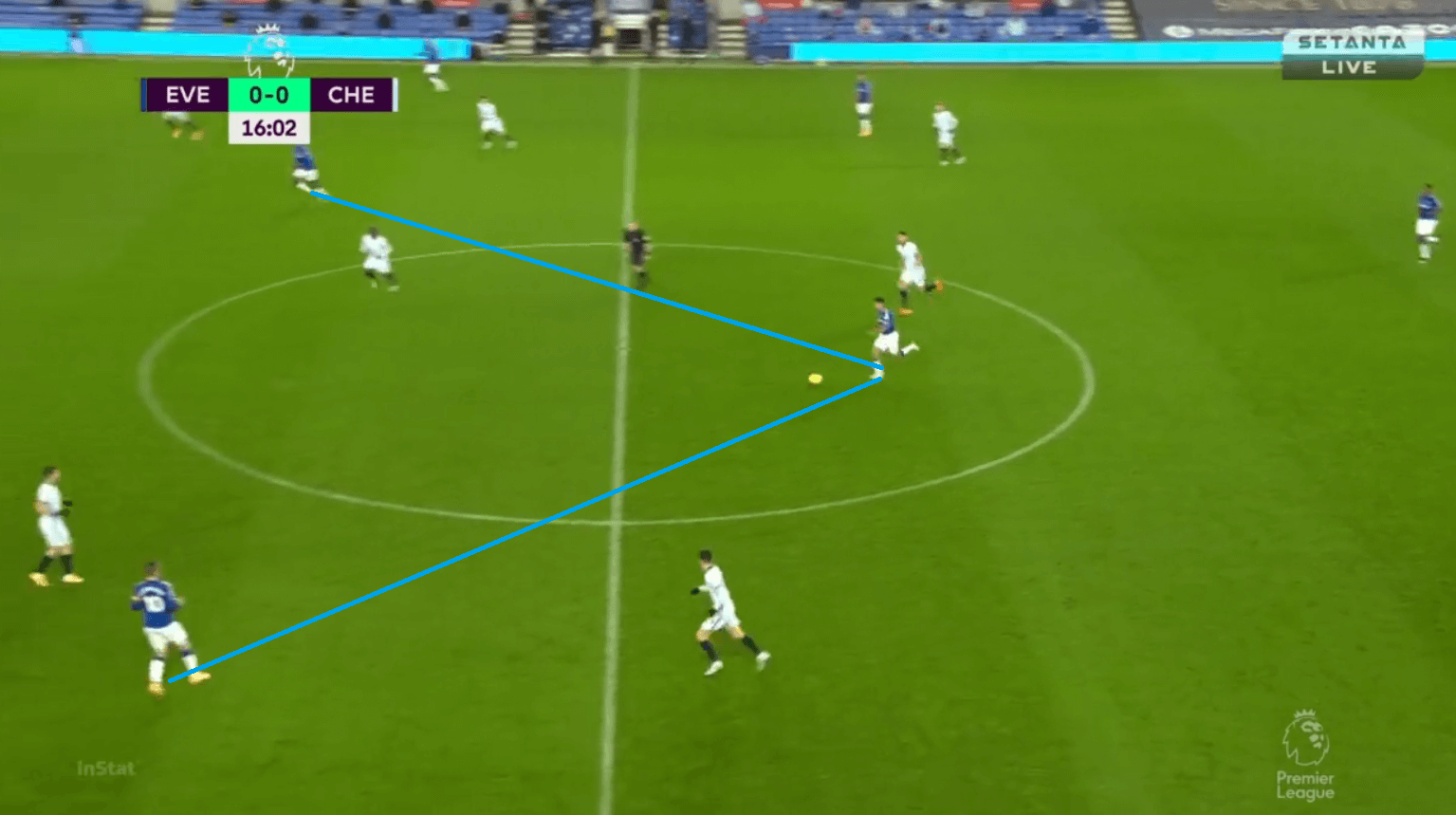 Later, in the match, they attacked the spaces down the wings during counter-attacks about which is explained in detail in the next section.

Chelsea without possession was very vulnerable to opening spaces for the Everton players to run. They were instances where Chelsea left players to get away easily into vacated spaces and allow them to create danger. Early in the match, in one such instance after a throw-in, Godfrey threw the ball to Richarlison. The Brazilian then played it to Sigurdson, who had Zouma marking him tightly. When Zouma stepped out, it created space behind the defence. When Sigurdson received the ball, all the Chelsea players in the image below were focused on Sigurdson / ball and they left Richarlison to run free. He then played a beautiful lay-off to Richarlison, who had a weak shot saved by Mendy. 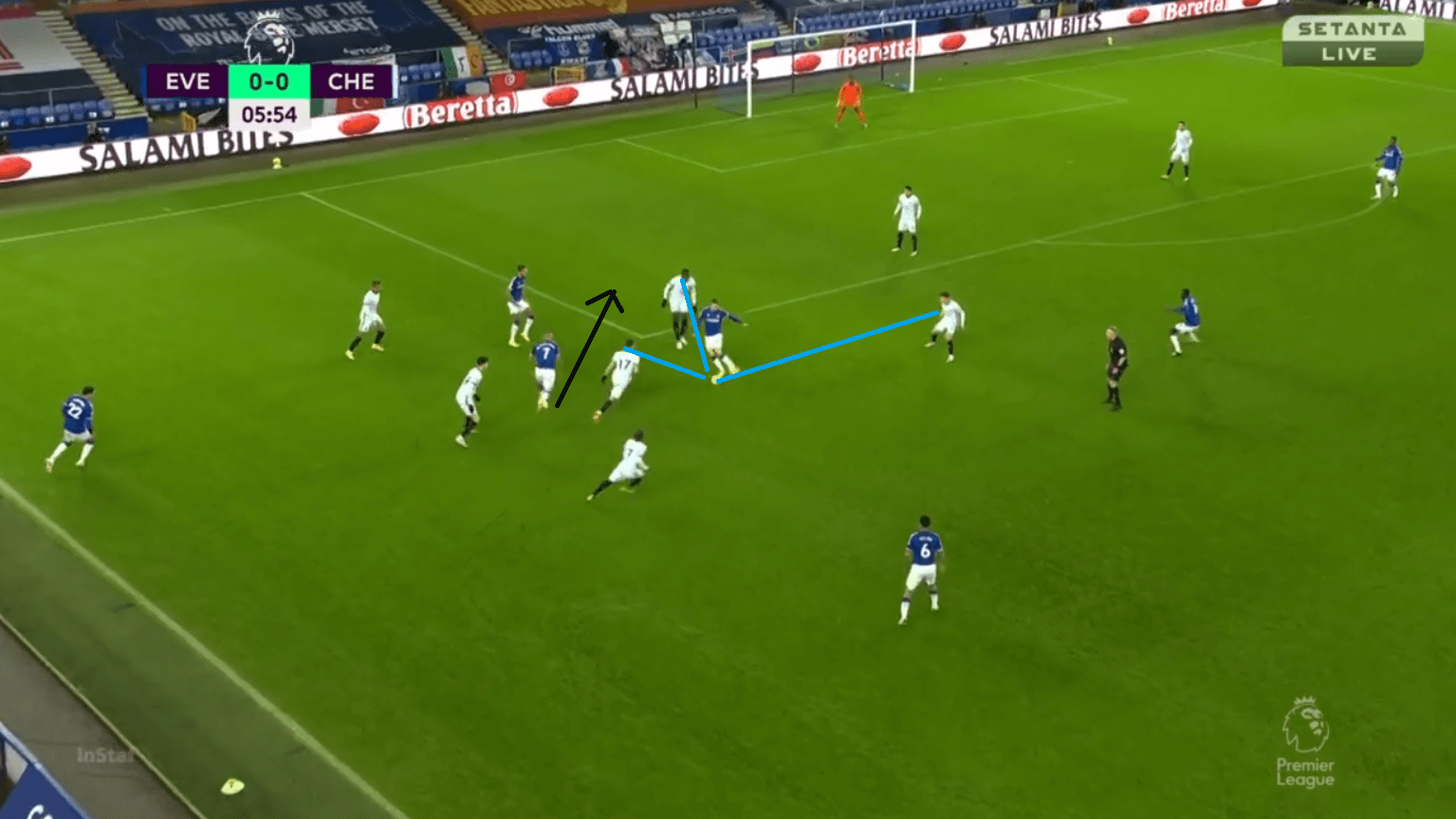 Another main issue with their rest defence is that it was under numerous threat during transitions. With Chelsea opting for a 2-3-5 system, the wide regions besides the centre-backs were open to huge spaces since the full-back went high to overlap while the central midfielders also sometimes made runs into the channels. This way they never had a defensive presence in either flank to protect from transitions as all of them were involved in the attack to achieve combinations. This left with no one having a definitive responsibility of defending the spaces. The example shows Richarlison attacking the space with Reece James behind still trying to catch him up. 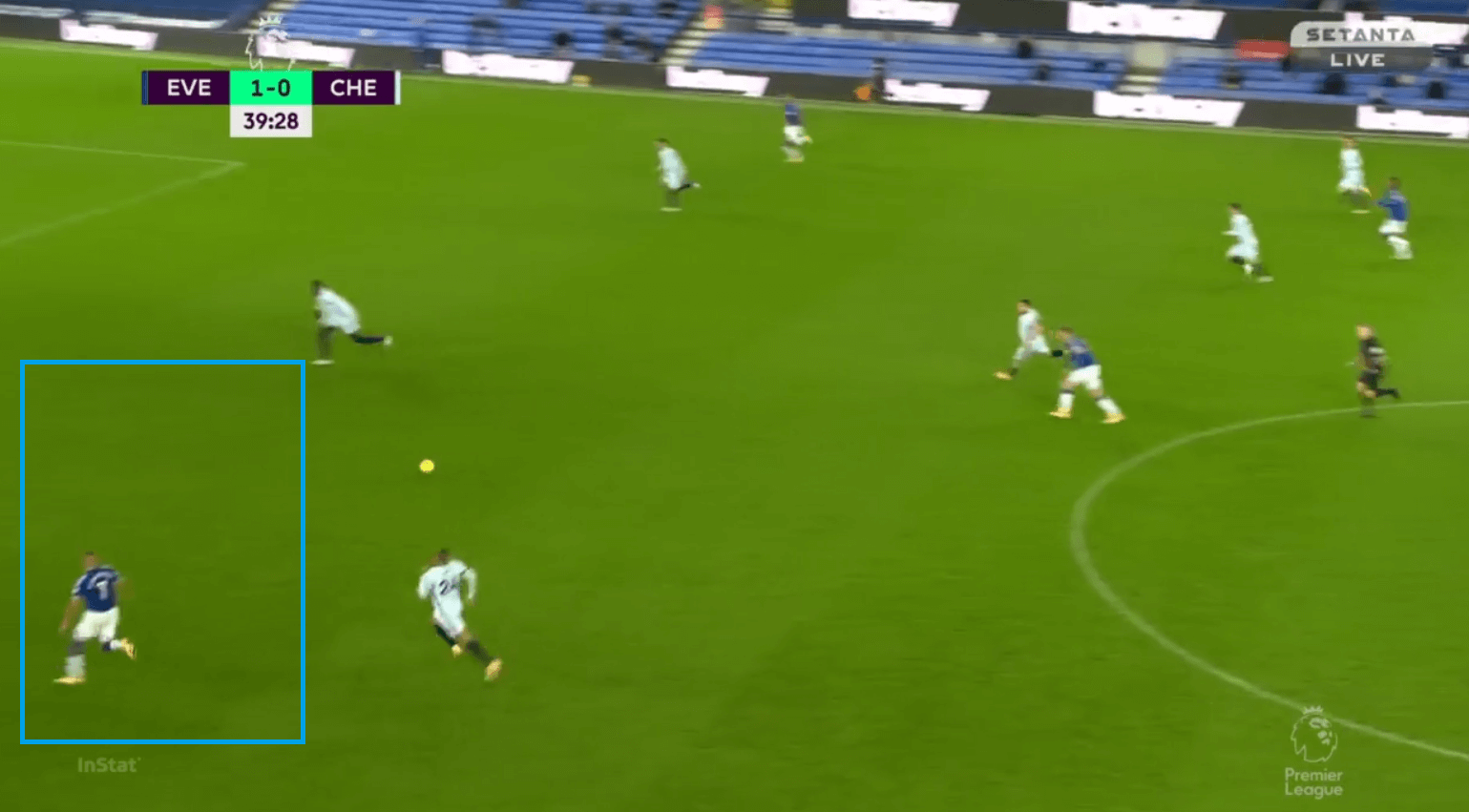 If Frank Lampard needs to win the title this season, he needs to polish these recurring cracks that could cost Chelsea the title.

Carlo Ancelotti’s men eventually ran out as comfortable winners at the end of the day which saw them go above Manchester United in the table, the Red Devils have played a game less. The win saw them come back to the winning ways after a brilliant start to the season was altered with some lacklustre displays. Chelsea, on the other hand, continued their poor form against big teams as they haven’t scored a single goal against the current top clubs in the league this season.