At the end of the MLS season, two clubs from both the Western and Eastern Conference clashed at the iconic MAPFRE Stadium in Columbus, Ohio. The Columbus Crew and the Seattle Sounders were able to provide intriguing storylines in the build-up to the match.

After emerging victorious from the Eastern Conference Final, Columbus were playing in their third Cup final in club history. The Crew were looking to win their second final, albeit without some key players. Caleb Porter was without midfield general Darlington Nagbe and Portuguese winger Pedro Santos.

The Seattle Sounders scored two goals in stoppage time against Minnesota to get to their fourth final in five years. Led by the stoic Brian Schmetzer, the Sounders were aiming to cement their status as the latest dynasty in the league.

In the end, the Columbus Crew dominated Seattle with a well rounded and confident performance. This tactical analysis will look at how the Crew maintained their style of play without two key players, and how the Sounders’ potent attack was suffocated by Columbus.

While there were the obvious absences, Porter kept the Crew in a shape and playing style they were familiar with. Replacing Nagbe was 19 year old Aidan Morris, the youngest player to start in an MLS final. Derrick Etienne Jr. started on the left for Santos. While Columbus would miss out on the former Braga midfielder’s attacking threat, they could count on Gyasi Zardes and Lucas Zelarayán for attacking output. Eloy Room started between the posts for the first time in two weeks. 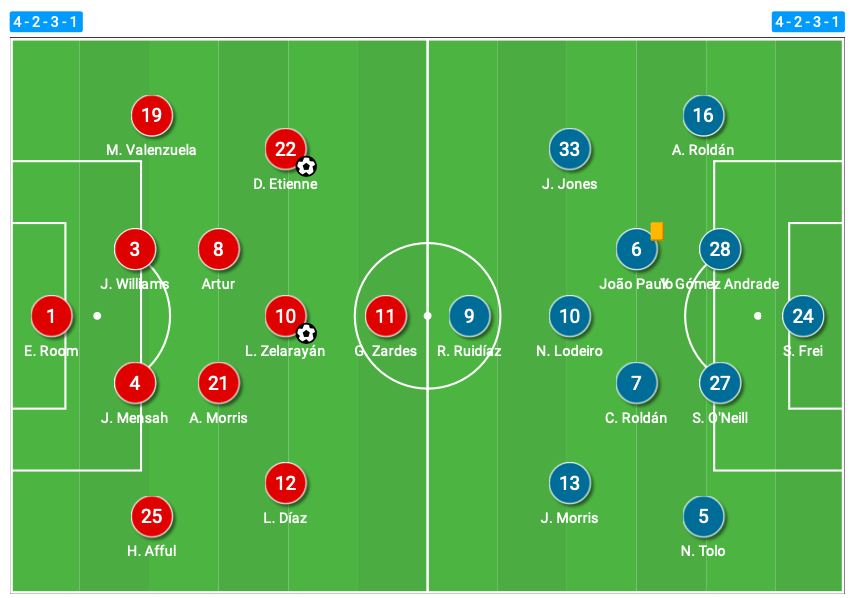 Schmetzer called upon his trusted starting 11 to face Columbus. The Sounders attack was spearheaded by Raúl Ruidíaz, Jordan Morris and former Ajax man Nico Lodeiro. This attacking trio has scored 26 goals and assisted 13 times. Seattle also looked to lean on the creativity of the Roldán brothers, who have contributed with six assists.

Caleb Porter’s philosophy and game model was on full display in the final. After playing more direct to cut through the New England Revolution, Columbus brought more of the same attacking urgency against Seattle. Their direct and disciplined tactics were similar to what Bayern Munich have done under Hansi Flick.

Against the Sounders, Columbus was able to exploit the weak side multiple times by creating overloads and quickly switching the point of attack. An analysis of the Crew’s first-half goals show this tactic at work. 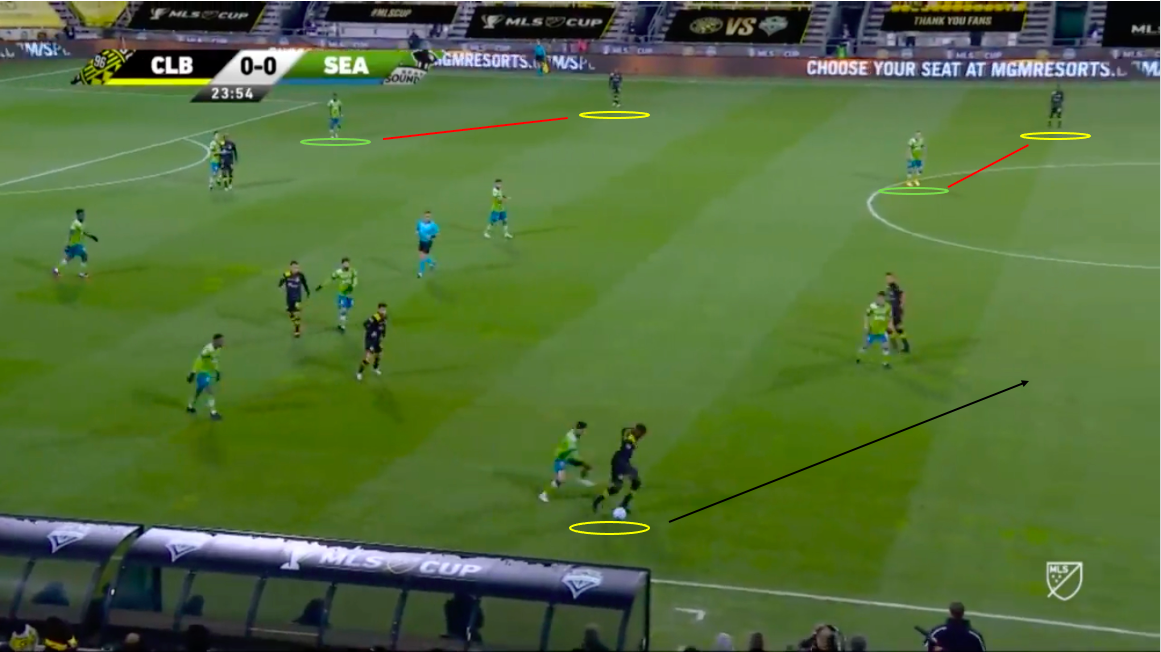 In the build-up to the first goal, Columbus have drawn the Sounders’ defence over to the left side of the field. Etienne Jr. is able to play Aidan Morris who quickly switches play to the right-back Afful. 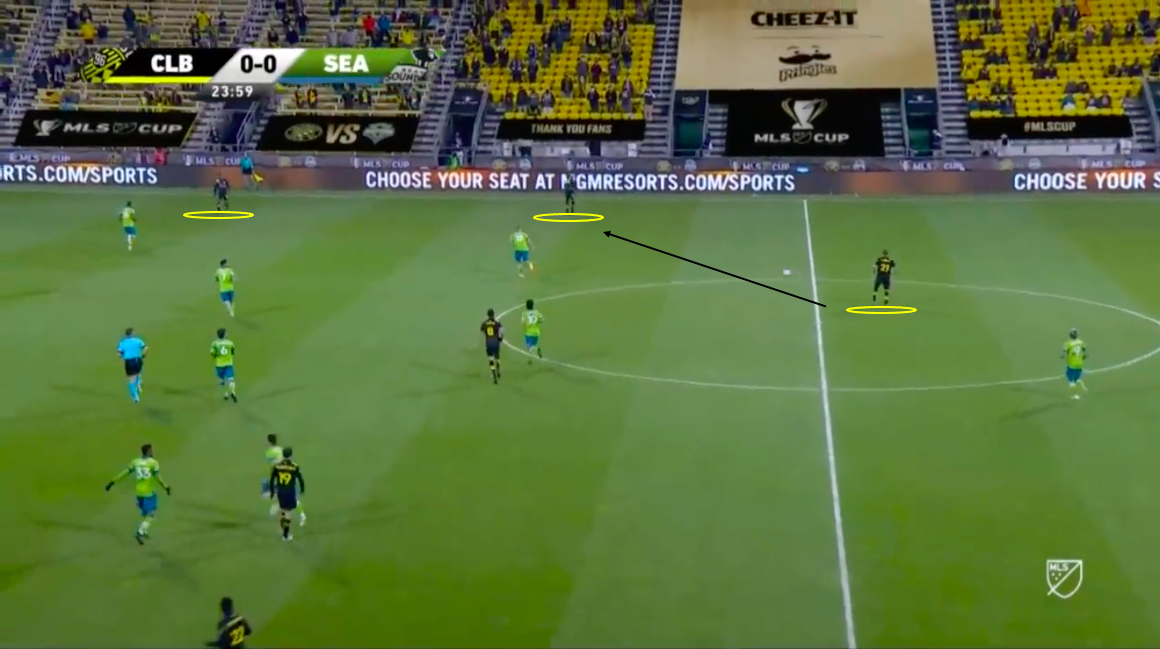 We can see the Crew’s was able to create a 2 v 2 situation on the weak side. Afful then has time and space to calmly pick out Zelarayán’s run in the penalty area. Below we notice that the Argentinian was able to position himself in the defenders’ blindside. 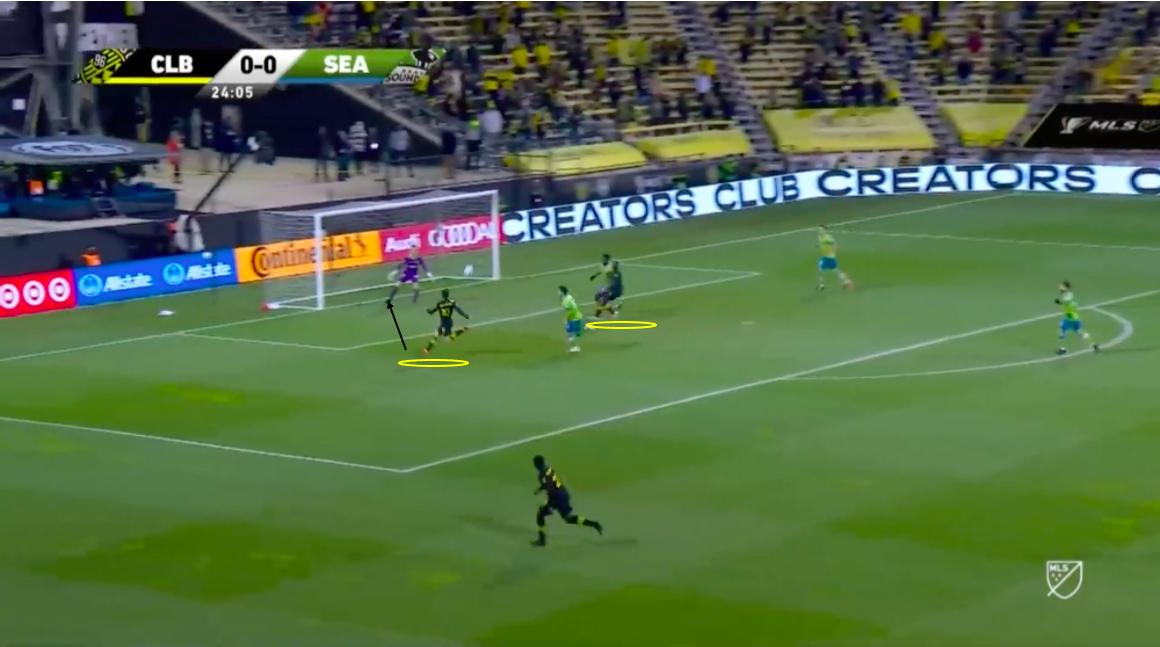 Combined with Zardes pinning of the centre back and right back, Zelarayán’s movement creates enough space for him to finish under light pressure.

Building up to the second goal, we again see how Columbus was able to expose the Sounders by drawing their defenders towards the ball. Afful once again is able to swing a cross into the penalty area. 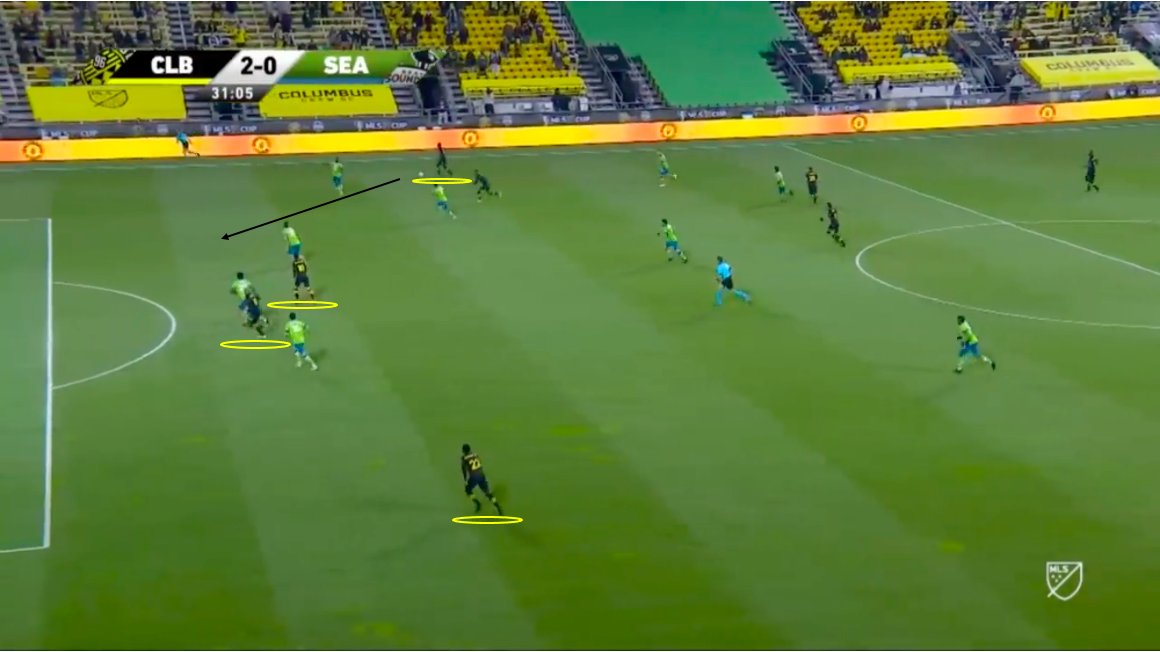 Although the ball is cleared, it falls to Zelarayán. The Argentinian winds up to shoot, which attracts a defender to block his shot. Zardes’ positioning again draws the defenders’ attention towards him, leaving Etienne Jr. unmarked. 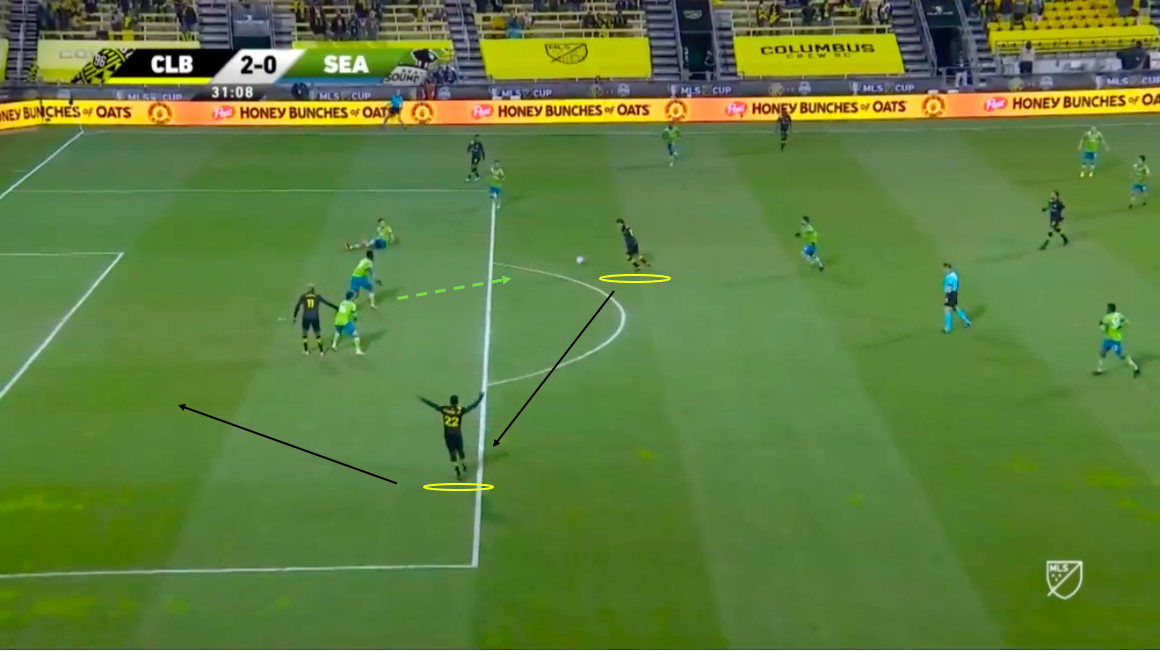 The left-winger is then able to clinically finish off the move after receiving the pass from Zelarayán.

The Sounders’ defenders were forced into a narrow shape due to the positioning of the Crew’s wingers and striker. When in possession, the far side winger would invert, and the outside back would remain wide as an outlet. While the defensive narrowness was apparent in the previous section of the analysis, below, we see it further highlighted.

Left-back Tolo is close to the Crew’s right-winger Díaz, who can be seen in the centre. Seattle’s midfielders are outnumbered in the middle due to Zardes dropping into the midfield, which frees up just enough space for the free man Zelarayán. 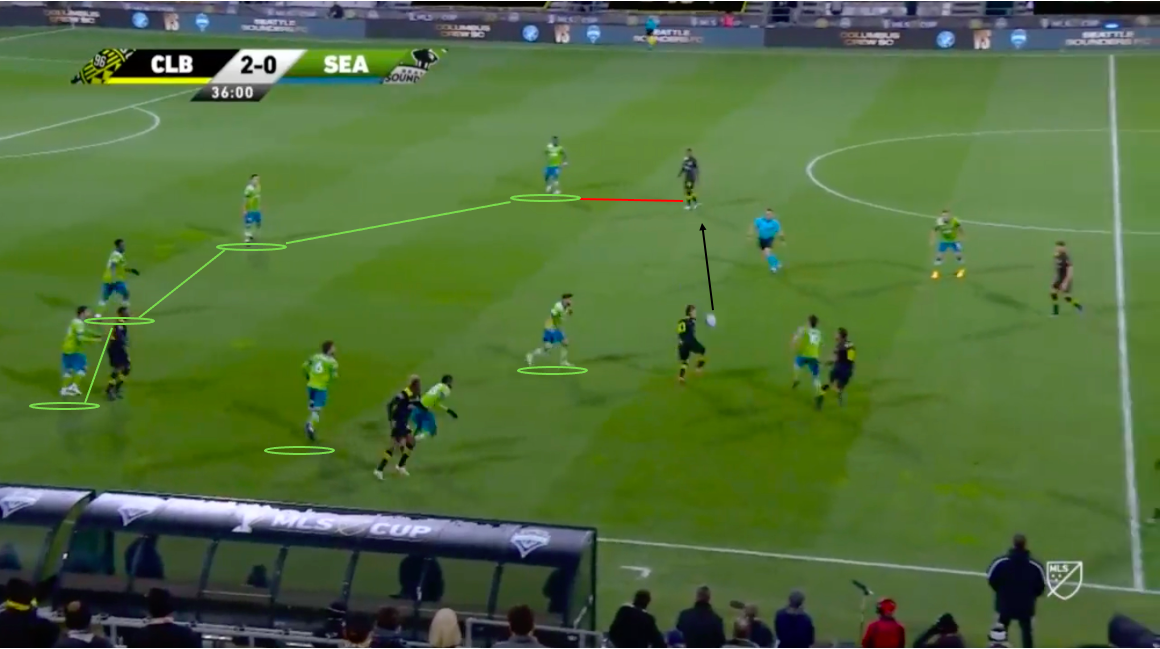 Once Díaz receives the ball, he can calmly play the ball into space for Afful, who is holding his run until the right time. The Sounders’ double pivot of João Paulo and Roldan can be seen recovering towards the Crew’s right-winger. 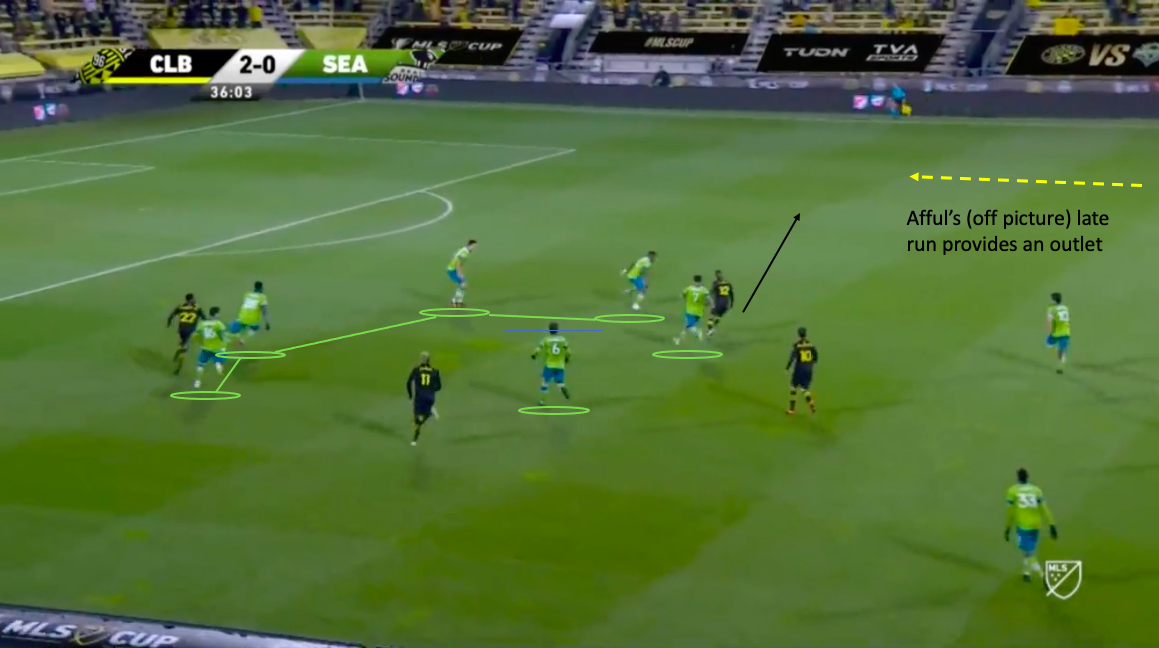 As the play develops and Seattle’s players recover, two options open up for the Crew. The clearest option and the one that is utilised is to play the ball to down the line to the winger. Due to the double pivot tracking the winger, an acre of space opens up for an advancing Crew midfielder. 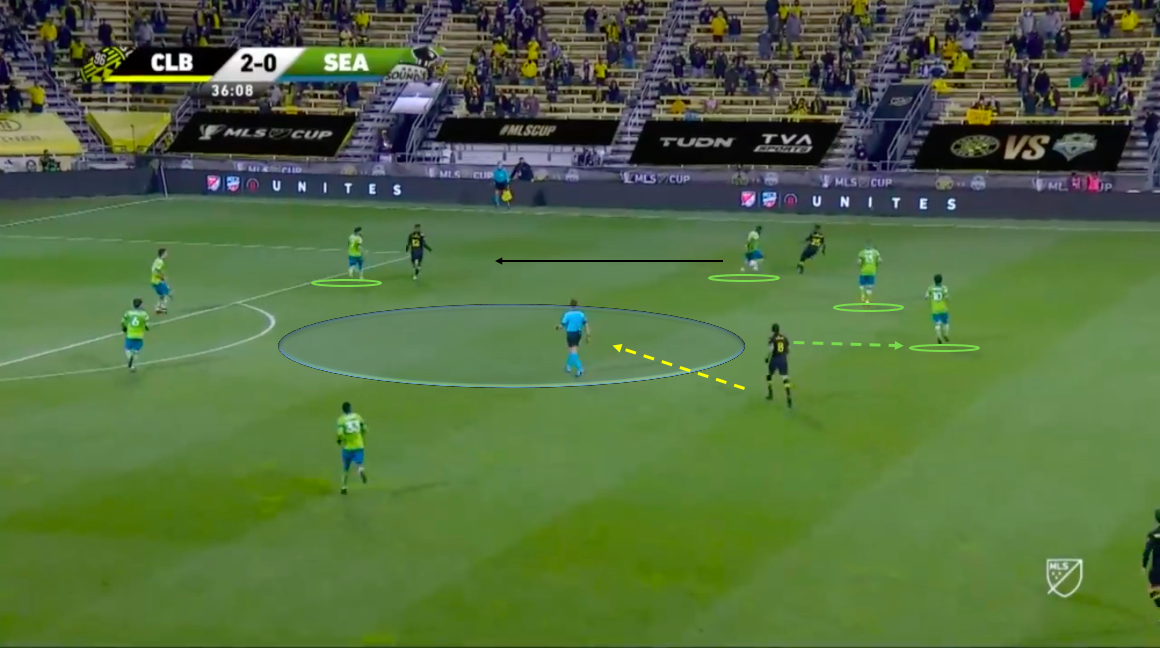 Seattle’s defence was pulled across the field time and time again due to their insistence on remaining together and compact. This defensive tactic would have worked if the Crew were not able to switch the point of attack so easily.

Porter’s side shifted to a 4-4-2 in defence, as they have done in their previous fixtures. The front two’s task was to prevent easy central passes and force play wide. The remaining two lines would control the space between lines and keep track of any runners checking towards the ball. The aim of this tactic was to keep the ball away from Seattle’s main creative hub, Nico Lodeiro.

If the Sounders were able to pass into their double pivot, the Crew would press heavily to force the play backwards or wide. At times the use of this pressing trigger would result in a recovery for Columbus. Below we can see an example of this action. 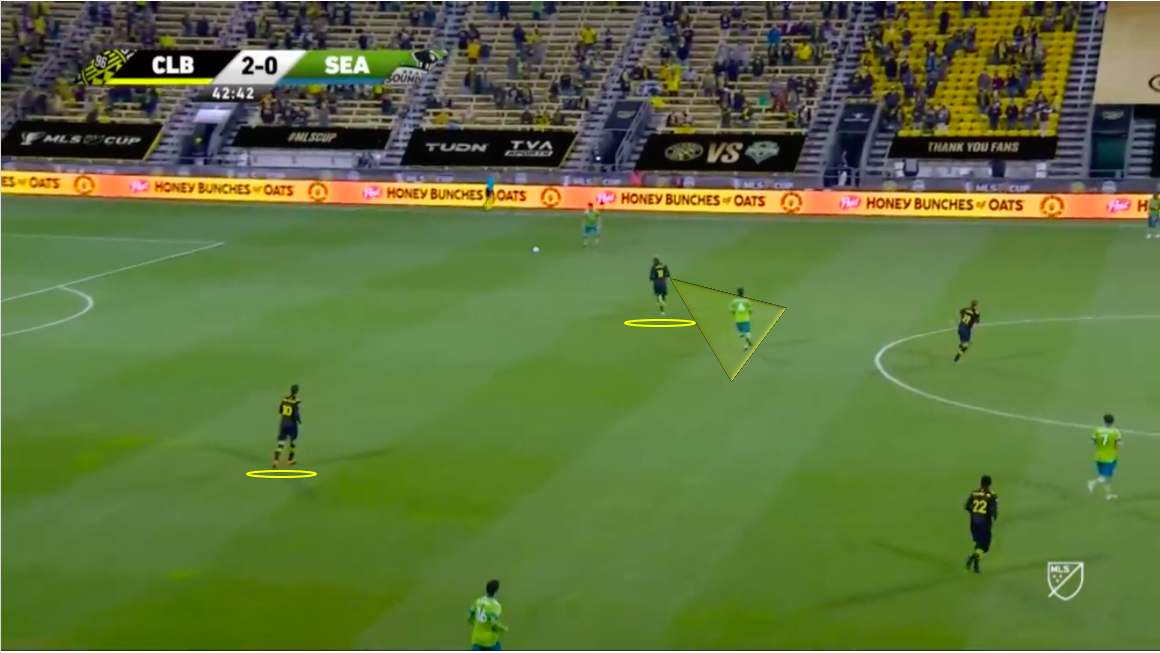 Zardes is able to lightly pressure the ball carrier while using his cover shadow to prevent a pass to João Paulo. Due to the marking on the right side, Seattle are forced to pass backwards.

Later on, we see Alex Roldán in the midst of passing to older brother Cristian. As the midfielder checks, Columbus midfielder Artur steps to pressure his first touch while Zelarayán doubles the pressure from his forward position. 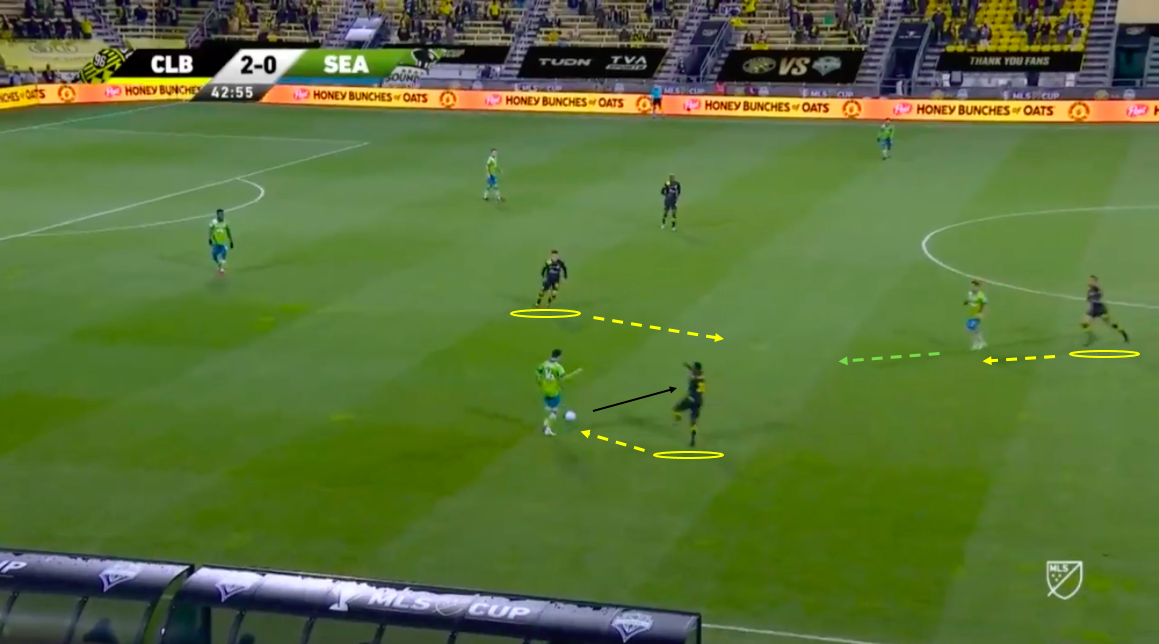 The immediate pressure forces the eldest Roldán into a poor touch backwards. While he is able to escape the initial defensive pressure, he is put under more pressure by Etienne Jr. Although the play ends with a foul on Roldán, it shows the tactic that forced the Sounders backwards or wide.

The Crew were able to successfully contain Ruidíaz and Lodeiro, with the Peruvian striker getting just 23 touches on the ball. Their defensive tactics also allowed only two shots on target, blocking nine in the process.

Due to the Crew’s defensive efforts, Seattle were forced to create chances from the wide areas. This is evident by the 22 attempted crosses from open play. Unfortunately for the Sounders, they were unable to successfully connect with any of those crosses.

Since Lodeiro was unable to receive the ball in pockets of space in the final third, the Uruguayan resorted to dropping deeper to get on the ball. In the examples below, we are able to see this in action. 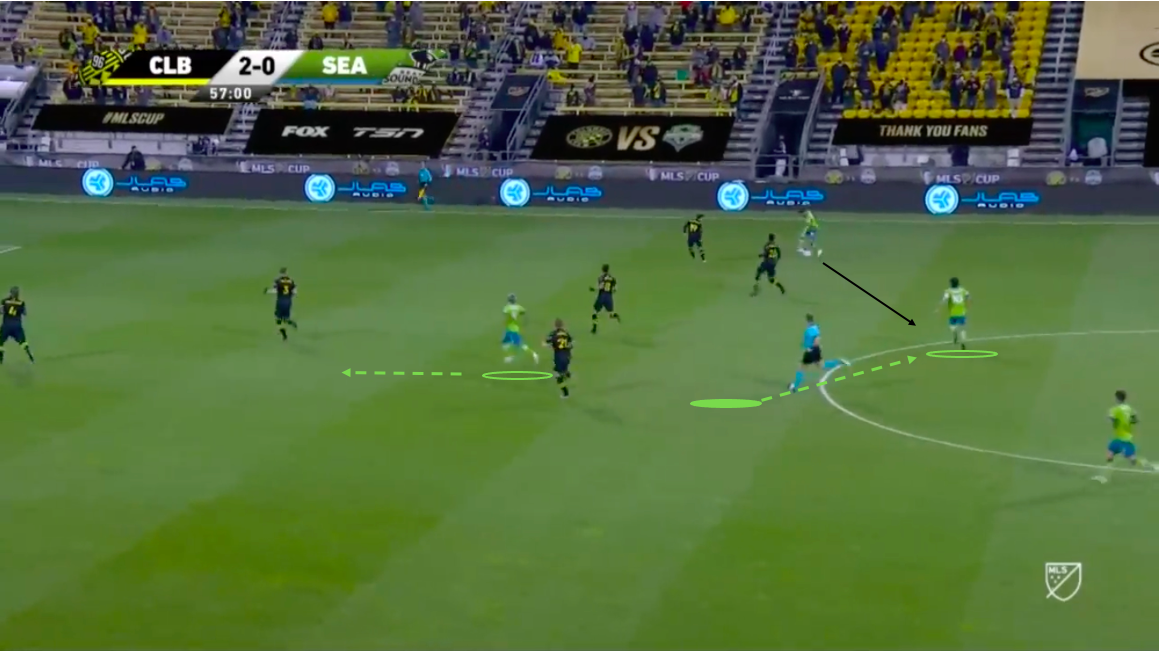 In the first example, Seattle are in the midst of a counter-attack. Instead of joining Ruidíaz, Lodeiro opted to cut back and receive the ball near half field, slowing the transition down and allowing Columbus to recover. Although he is able to successfully connect a long pass, he remains disconnected from the rest of the attack. 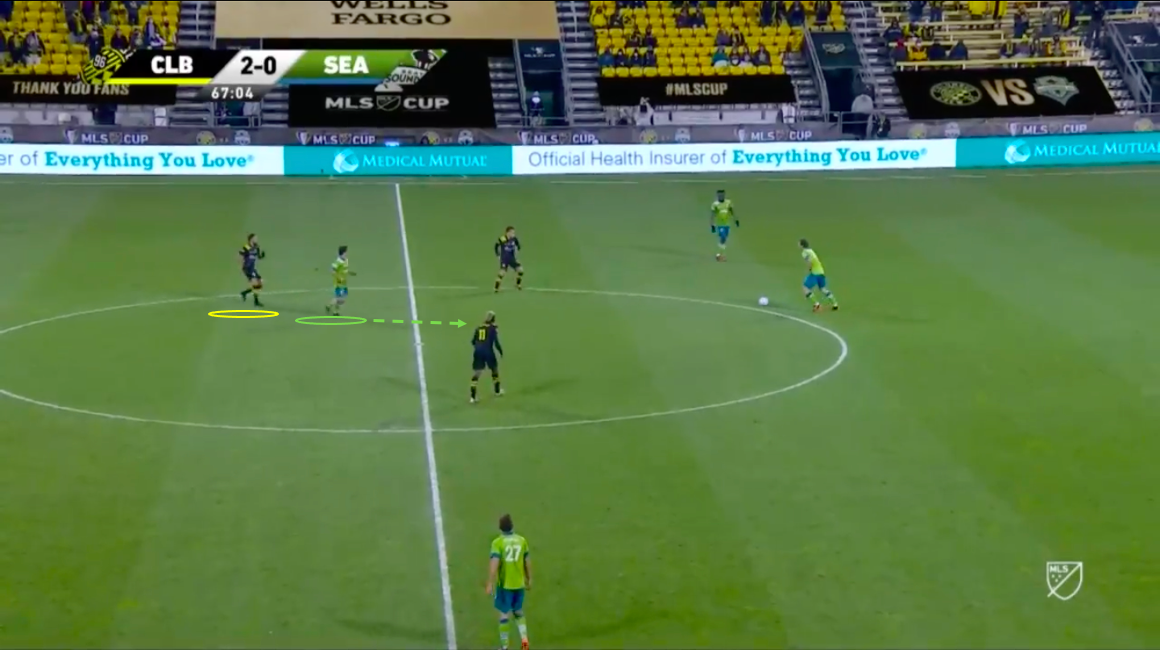 Again we see Lodeiro dropping near half field to receive a pass, but due to the defensive presence of Artur, Svensson plays a long ball upfield. Again the Sounders’ captain is disconnected from the rest of his teammates and remains isolated from any sort of attacking buildup. 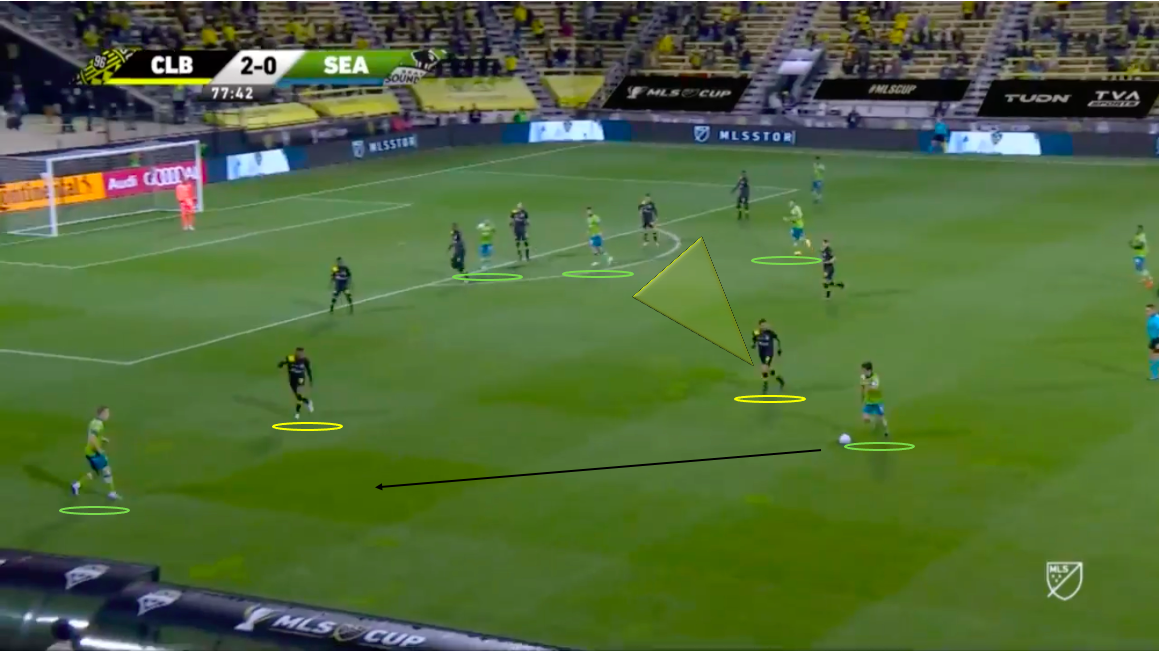 With the final example, Lodeiro is entering the final third whilst under pressure. Once again, his positioning and Columbus’ defensive structure keeps Lodeiro from linking up with any of his teammates centrally. His only option is to play to the right-back, who swings an early cross into the box.

Columbus discipline on defence and clinical nature in the attack silenced the Seattle Sounders. The energy Aidan Morris provided in the midfield was also a massive factor in the Crew’s dominance in transition as well. This was by far one of the Crew’s best performances of the 2020 season, and it culminated with a well deserved Cup final victory.

Although the Sounders were runners up, they are still one of the teams to beat in the Western Conference and could easily appear in a fifth final next season. Columbus will look to continue their revival under Caleb Porter, and defend their title in 2021.