Martin Payero scout report: from the Olympics with Argentina to being Middlesbrough’s next #10

After completing his move to Middlesbrough for 6.75 million euros, Martín Payero became the third-biggest sale of the Argentinian side Banfield, just behind James Rodríguez to Porto (currently at Everton) and Darío Cvitanich to Ajax and surpassing the transfer of Javier Zanetti to Inter in 1995.

Born in 1998, Payero is an academy product of Banfield and he already had 60 professional matches in his career before the move, both for Banfield and Talleres de Córdona, where he played on loan. In those 60 matches, he scored three goals and provided eleven assists, which earned him the call of Argentina U23 for the Olympics this summer.

In this tactical analysis, we’ll see why Payero has attracted Middlesbrough’s interest, what he could bring to their tactics and potential areas to improve to reach his best version.

Payero is a right-footed central midfielder who usually plays on the right side of a midfield trio. Not a positional defensive midfielder and not a creative number ten, Payero needs to play alongside a more defensive midfielder and also needs more creative players in front of him. He covers a lot of ground and can also appear wide in the final third, almost as a winger, as seen in his heatmap below. 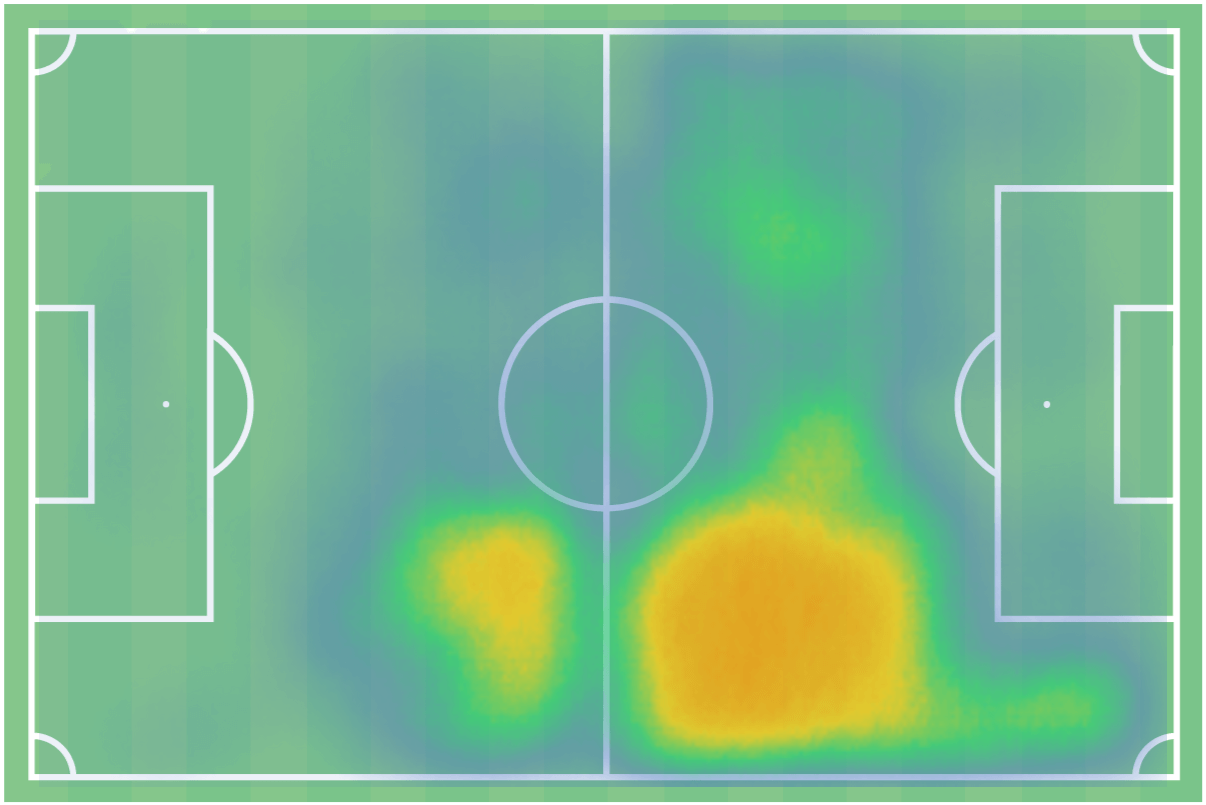 Standing at 183cm / 6’0’’, Payero is a good presence in the middle of the park. Apart from his size, he also has a big frame and long limbs that make him an excellent runner. A very powerful player going forward, Payero takes full advantage of his engine as we’ll see later in this scout report.

Technically, Payero is a good player but not a spectacular player who will dominate games thanks to his quality. He usually takes simple but effective and well-chosen touches both to control, pass and drive the ball forward. His delivery from set-pieces is excellent and has shown glimpses of his ability to shoot from distance too.

As we’ll see in the next section of this analysis, Payero excels at running with the ball. He covers ground very quickly and uses his frame to get past defenders and progress by himself. This is the first thing that catches the eye when watching him and is surely one of the main reasons why Middlesbrough decided to sign him.

In defence, he covers his zone but doesn’t stand out for recovering lots of balls. However, he has the conditions, especially physical, to improve in this area and could become a very interesting box-to-box midfielder in the near future.

The chart below comparing successful defensive and offensive actions of every central midfielder in the Argentinian league gives us a first insight into Payero’s profile. 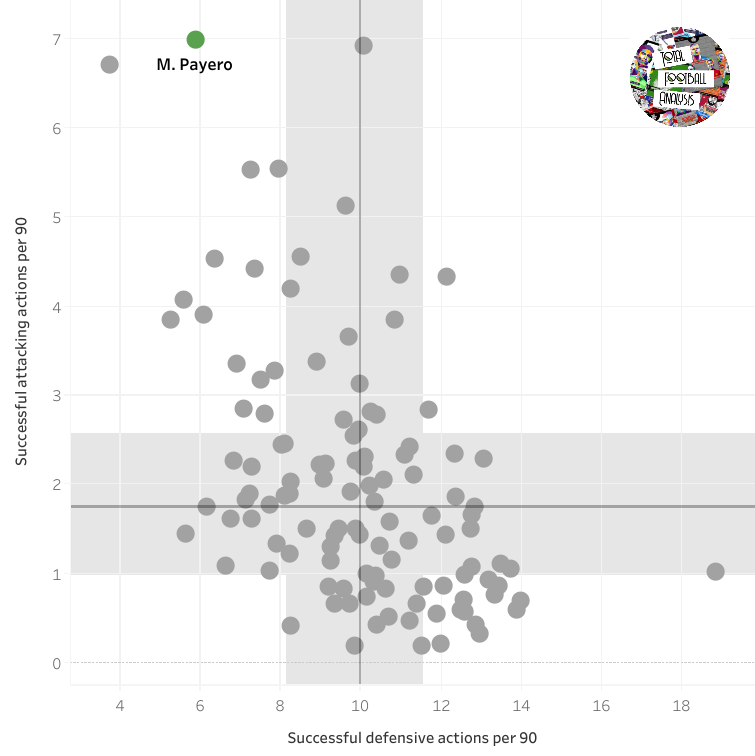 Payero was the best central midfielder in Argentina in terms of successful attacking actions per 90 with 6.99 in the last year but he was among the worst ones in successful defensive actions with just 5.89 per 90. This shows how offensive-minded and influential he is but also highlights that he needs to improve his defensive implication and effectiveness.

As mentioned above, Payero is a big, strong and powerful midfielder. Combining these characteristics with a very good reading of free spaces and his good technique, Payero has excelled as a ball-progressing central midfielder in the Argentinian league, especially in progressive runs.

Having a look at his stats, we quickly recognize Payero is an elite central midfielder in terms of getting past players and progressing with runs. In the chart below, we see how he compares to every other central and defensive midfielder in the Argentinian league both in progressive runs and dribbles per 90. The size of the dot represents offensive duels per 90. 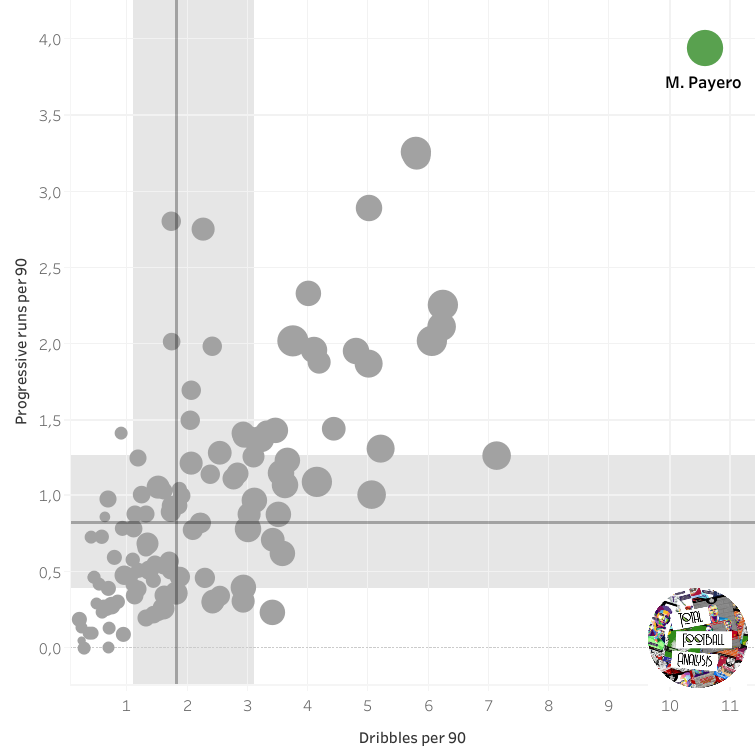 Payero does extremely well here, topping the charts for the three metrics combined. The new Boro midfielder made 3.94 progressive runs, attempted 10.58 dribbles and got into 19.47 offensive duels per 90 while in Argentina.

The stats speak for themselves but now let’s see in which situations Payero runs with the ball and how he does it. Despite being a quite big player, Payer moves fluently both in tight and big spaces. He can easily get past several players through the middle and progress into the final third.

Payero doesn’t need a lot of space to start running as he’s also quite skilled in tight situations. Using his body to receive with his back to the goal, he can turn with one or two touches and quickly accelerates to get past players in open spaces. The example below shows exactly that. 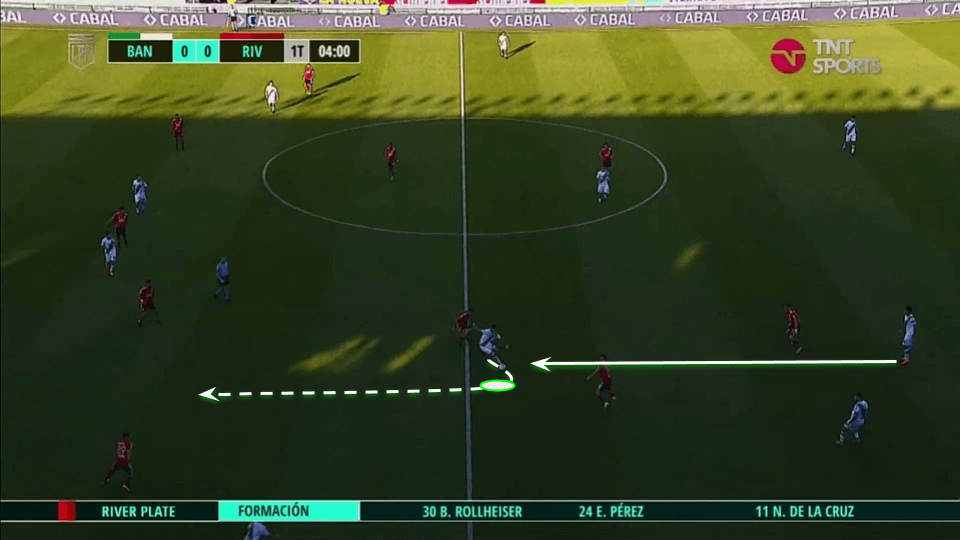 But Payero doesn’t need to have a lot of space in front of him to progress with the ball at his feet. Even when facing several players in tight spaces, he’s very good at feinting and dribbling with simple but intelligent touches, sending the rivals the wrong way and using his power to get past them. The sequence below is a good example of this.

Payero starts the play pressed by two players. With his body position, he suggests he’s going to pass the ball to the centre and when the rival tries to cover that space he quickly accelerates and leaves both defenders behind with just one touch. This kind of feints are based more on reading space and hiding intentions than on pure technical quality as the touches themselves are quite simple. 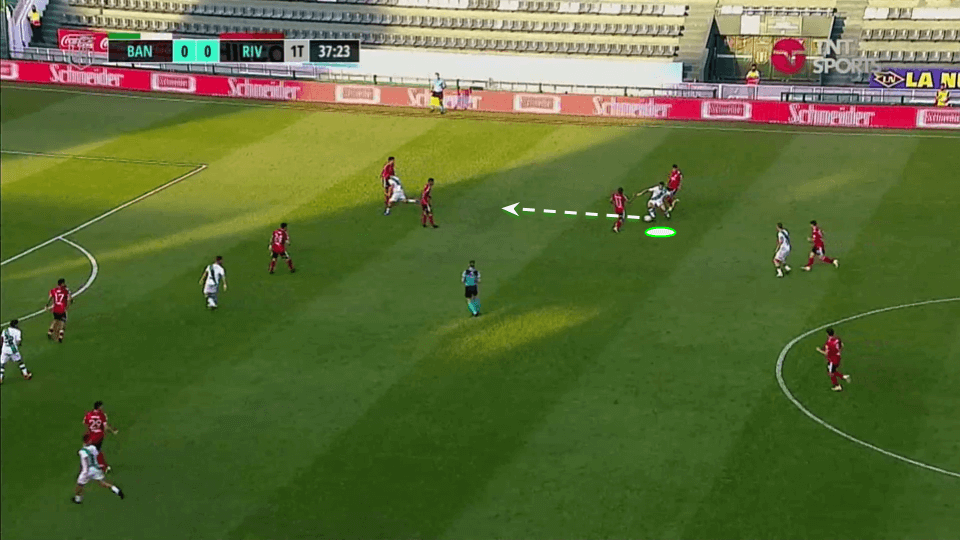 When he reaches the next rivals, Payero feints he’s going to the left and goes to the right, getting past the third rival with a couple of quick touches and reaching the edge of the box. Once he starts running, Payero builds momentum quickly and becomes very difficult to stop, getting past rivals very easily. 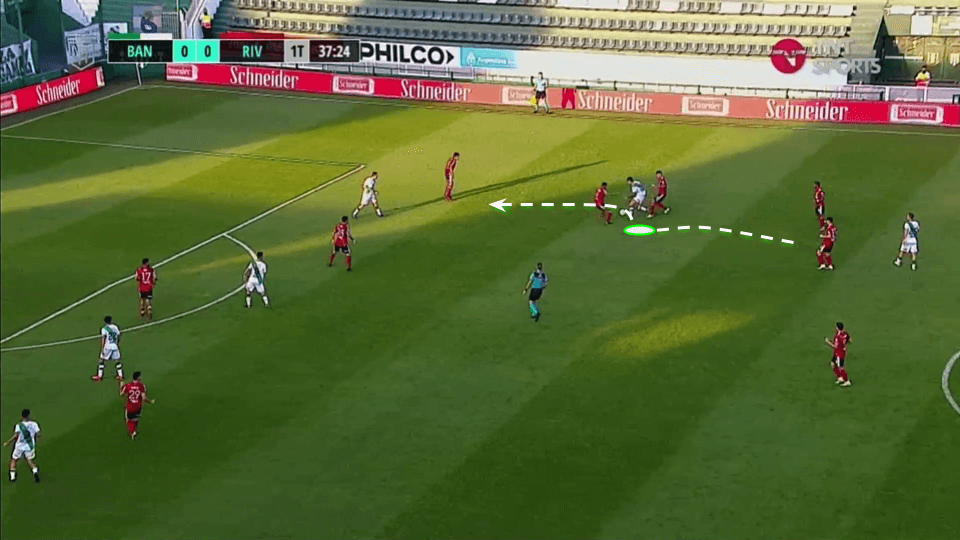 The play ends with Payero shooting from the edge of the box and forcing the goalkeeper to make a great save. After his runs, Payero usually tries to finish or get the ball into the box. 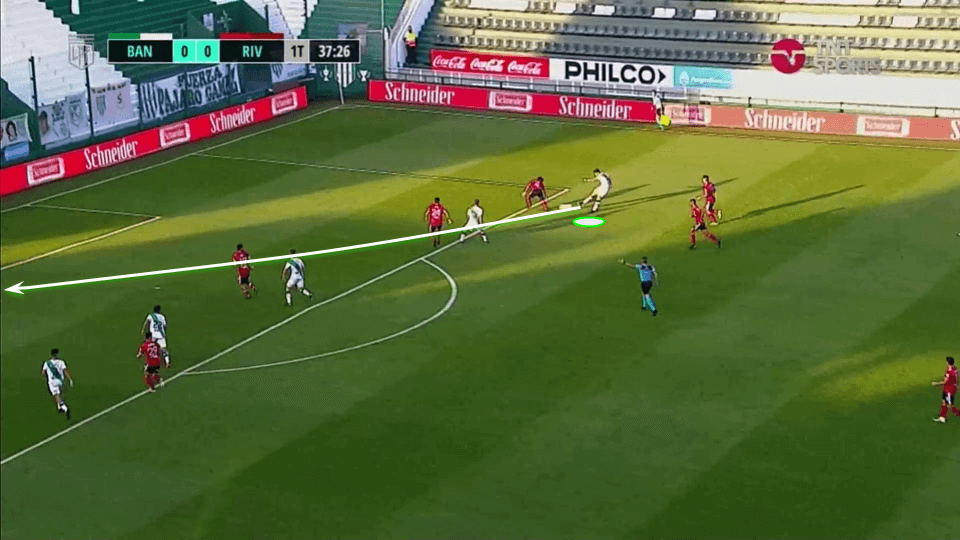 Payero’s excellent dribbling figures are based on his physicality and reading of space rather than on pure technical quality. He uses his body to push defenders and get past them with simple touches and can also feint with his body while running at top speed to send rivals the wrong way before changing pace as seen in the examples above.

Playing as a central midfielder, Payero’s runs usually happen through central positions but he also has presence in wide areas in the final third, from where he can also dribble and get the ball into the box.

When attacking from the sides, his dribbling style doesn’t change a lot and he still bases it on his physicality. In the example below, we can see him pushing the rival with his body to create the space he needs to cut back and get into the box. 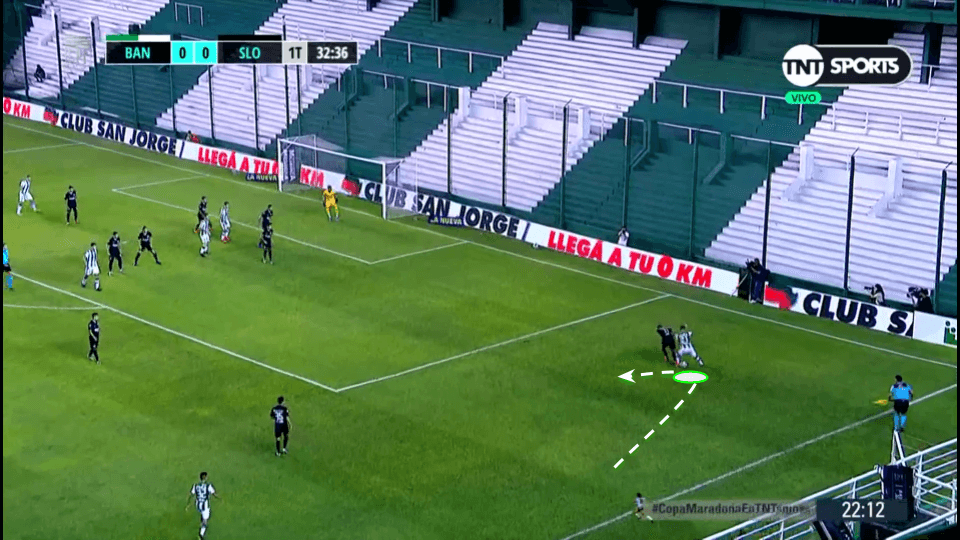 We’ve already mentioned that Payero likes to shoot from distance after his runs and the next chart confirms that. He’s the fifth central midfielder with the most shots per 90 in the league with 2.55 but takes them from far most of the time, which explains why he’s just average in xG per 90 with just 0.08. 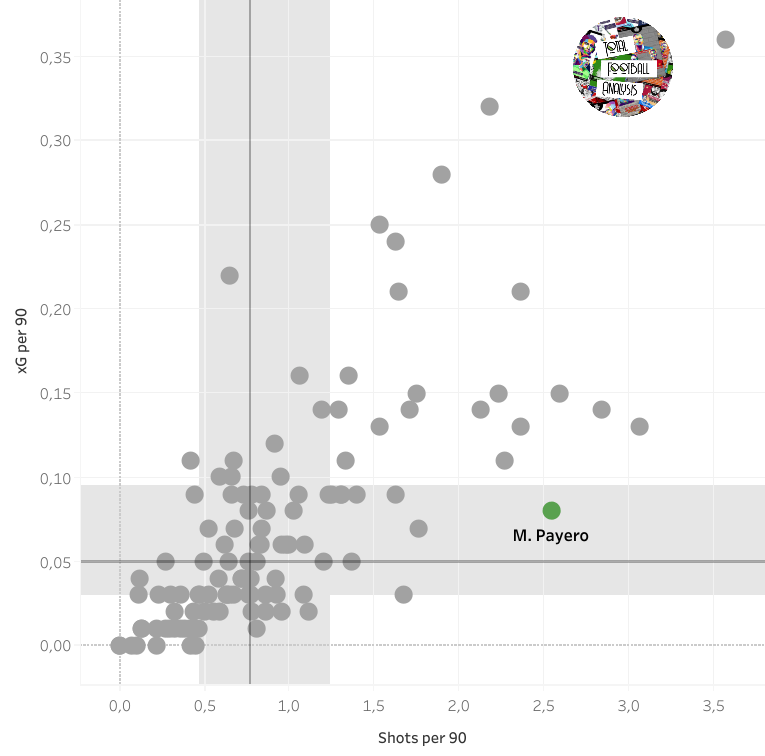 His finishing from distance seems to be quite good so it’s one of the characteristics Payero still needs to show consistently but that could make him stand out in the Championship.

When it comes to participating in the attacks and passing the ball around, Payero isn’t a standout player. With just 27.8 passes per 90 and an accuracy of just 73.61%, he falls in the bottom 25% among central midfielders in the Argentinian league for both metrics. We can’t expect Payero to be a deep playmaker. 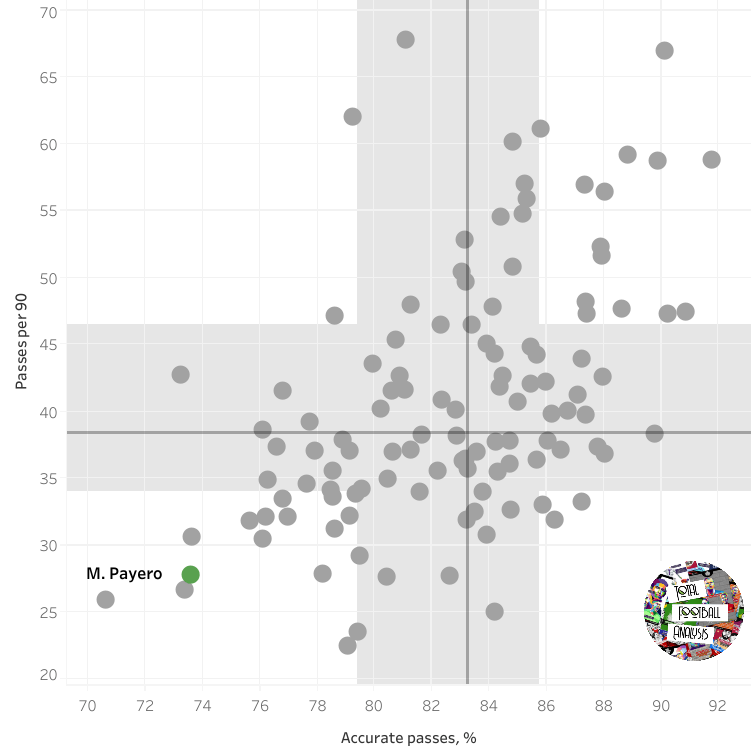 Basing his game mostly on his powerful runs as seen in the previous section of this tactical analysis, Payero keeps it simple when he’s deeper in the pitch and can’t turn and run but once he reaches advanced positions he’s very aggressive with his passes, which explain his low overall accuracy.

As he progresses mostly by running, he doesn’t really need to break lines or get into the final third with his passes. In the chart below, we can see that Payero against is well-below average both in progressive passes and passes into the final third per 90 with 5.24 and 4.49 respectively. 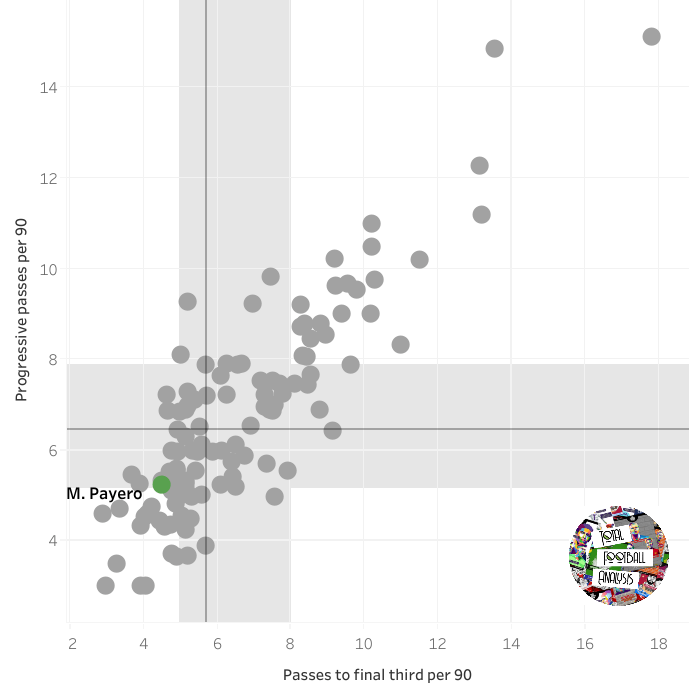 However, it would be too harsh and incorrect to say Payero lacks passing quality. Despite his low involvement in the buildup and apparent inability to break lines with his passes, Payero does stand out in some passing metrics. 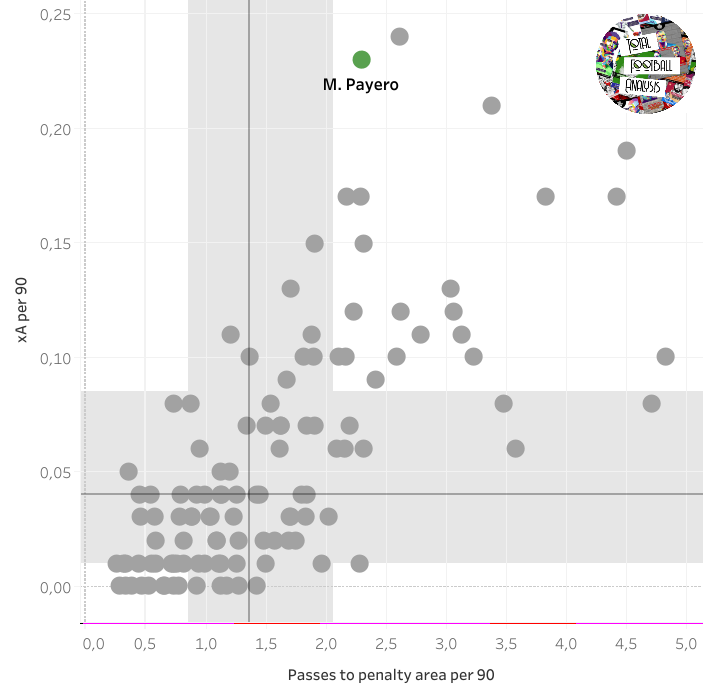 These outstanding figures are easily explained. Once he’s in the final third, Payero is very direct and tries to get the ball to the strikers in the box all the time. Often reaching the goal line with his runs, Payero gets into great positions to assist his teammates from wide. His excellent delivery from set-pieces is also an important part of his assisting numbers. This is one of the reasons why Neil Warnock could be tempted to use him as a wide midfielder in his tactics as he did in his debut in the EFL Cup against Blackpool.

Even if there are positives in the way Payero passes the ball, we have seen in this section that he needs improvement. Getting more on the ball and not relying only on his runs to break lines should be the next steps for his development as he’s likely to face new challenges at Middlesbrough and he needs to expand his solutions to them.

Payero is a very interesting gamble for a Championship club like Middlesbrough. A U23 Argentinian international who excels at breaking lines with his runs and with good delivery and shot from distance is a very interesting acquisition. Neil Warnock himself couldn’t hide his excitement when asked what his analysis of Payero was, stating that “You just don’t find this kind of players very often. I don’t think I could put my hand on someone in England who could do what Martin can do”.

However, Payero is still quite unidimensional at the moment and he should add some variety to his game before becoming too predictable. With his physical conditions and directness, he’ll surely be a useful player this season and could become a midfield powerhouse if all goes well.