This is the first season for Varbergs BoIS to play in Swedish top-tier. In week three, they travelled to the Stadion and challenged Malmo FF, who recently only gained one point from Häcken.

Against a newly promoted team, maybe Jon Dahl Tomasson’s troops should win all points with some quality displays, but not in this game. Two early goals, the second yellow of Anders Christiansen (former Chievo Verona player) have already hinted this was not a routine victory for Malmö.

In this tactical analysis, I will show you how Malmö failed to break the deep block of Varberg, and how did Joakim Persson’s men secure a draw.

After the midweek fixture, Tomasson made a lot of changes and some players were given chances to start. Behrang Safari replaced Jonas Knudsen as the let-back. The midfield duo was Bonke Innocent and Erdal Rakip, as Fouad Bachirou (former Paris Saint-Germain B) and Oscar Lewicki were on the bench. Isaac Kiese Thelin played as the sole forward since Guillermo Mollins was rested. Still, it was a 4-2-3-1 formation.

Varbergs played in a 5-4-1. It was a very different squad from the midweek clash. Only Joakim Linder and Jon Birkfeldt were in the starting eleven last game.

Similar to Mjällby in the first game, Varbergs also set a deep block to deny the home team. They were even more patience and conservative by dropping deeper and pressing less. The block helped Persson’s men to control the central areas and zone 14, limited the offensive threat of Malmö.

Even the opponents were passing through the halfway line, Varbergs were willing to sit deeper and deeper to wait. Maintaining the compactness of the defensive shape was a priority – not only vertically, but also horizontally. They just let Malmö exchanged passes around the block before accessing the offensive third.

When the home team were near to the block and in the final third, this was often the signal to press or compress spaces. For example, Rakip was confronting the defensive block below, and this required the Varbergs players pressure the ball.

Here, the right midfielder and central defender: Luke Le Roux and Birkfeldt were stepping up simultaneously. Given they were pressing in close proximity, it was difficult for Malmö as they have to play very quickly to escape from the pressure: a situation they were not handling well. 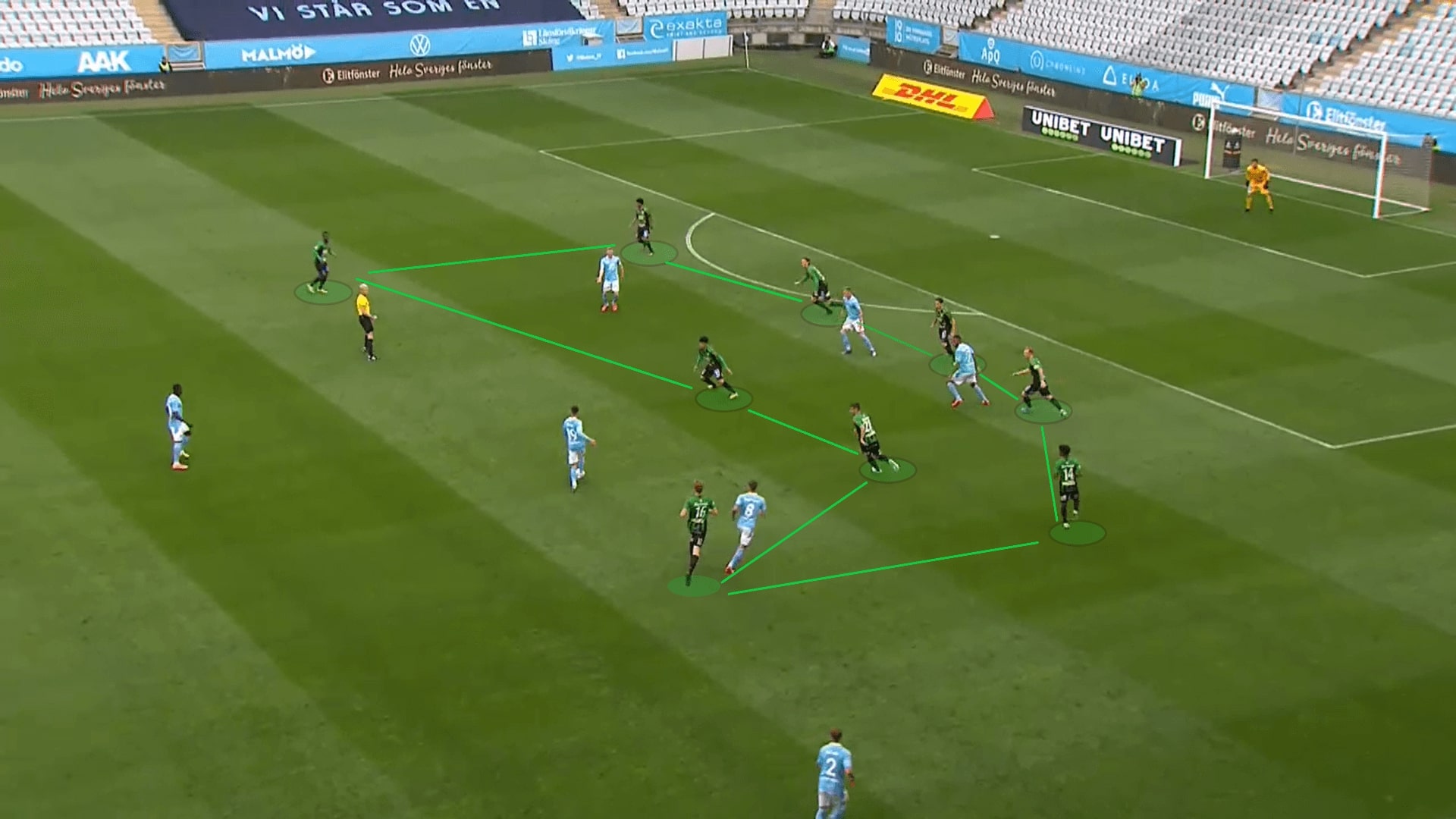 When defending at flanks, the defensive duties and positionings of Varbergs might switch because of defending the movements. The idea was, using the wide players to defend the opposition full-back, while the central midfielder or defender covered the supportive runs.

Since Malmö wingers inverted narrowly initially, all the outward supporting movements were under the sight of Varbergs defenders. Here, Sören Rieks’ forward run was tracked by the defender, and the receiver was never allowed to turn when being released to zone 16 or 18. 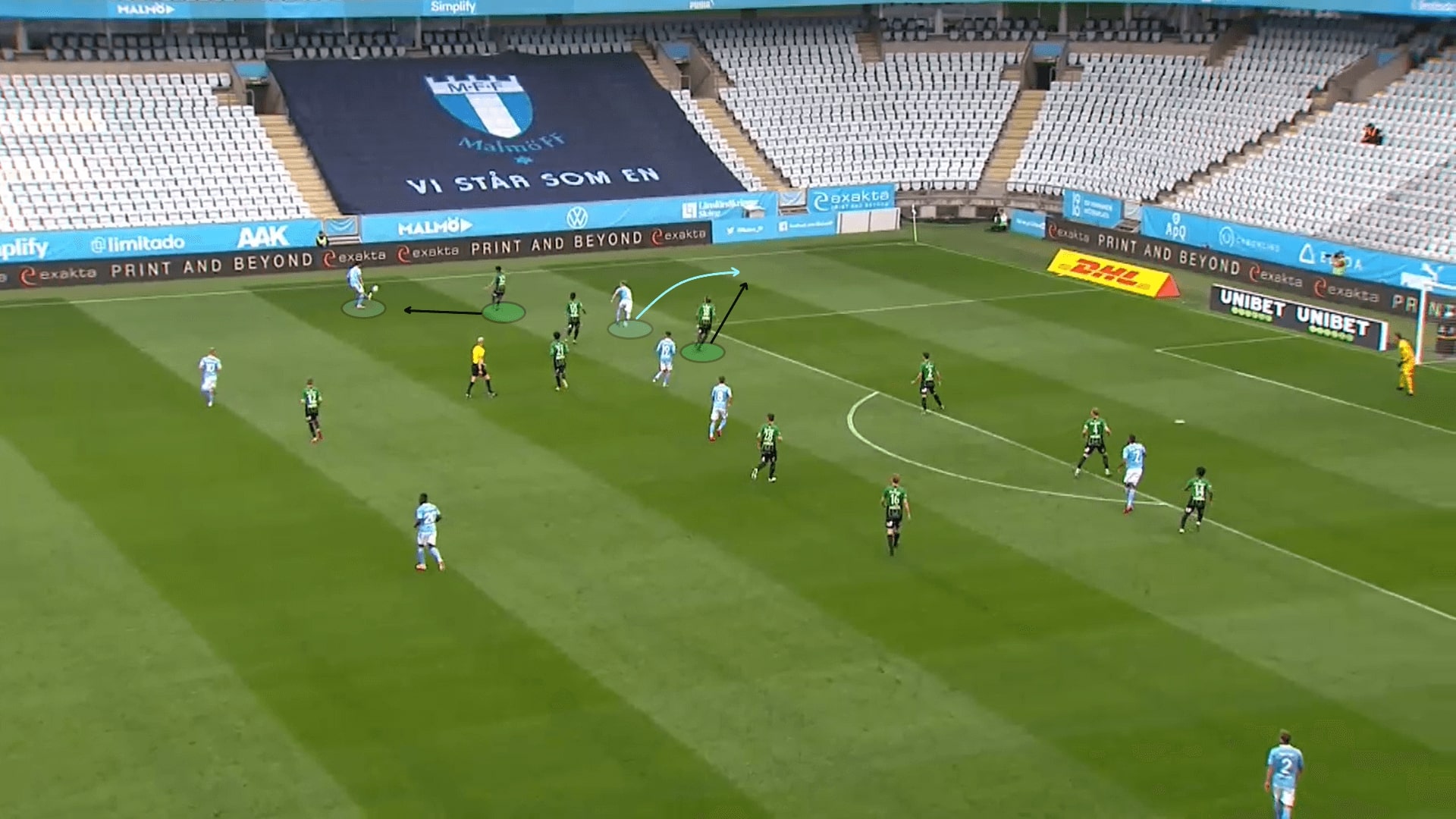 Without Christiansen who disrupted the lines by his movements, this encouraged  Varbergs to went slightly aggressive to push the second line higher. They were also pressing more often, trying to shield the ball side. The intentions might not be regaining possession, but just to delay the development of Malmö’s attacks.

In this example, Anel Ahmedhodžić, the former Nottingham Forest U23 player had to pass to his partner has the forward options were surrounded in the defensive block. Of course, the opposite flank was unoccupied, so the Varbergs wing-back would push higher a bit to close the angle of the weak side receiver a bit. 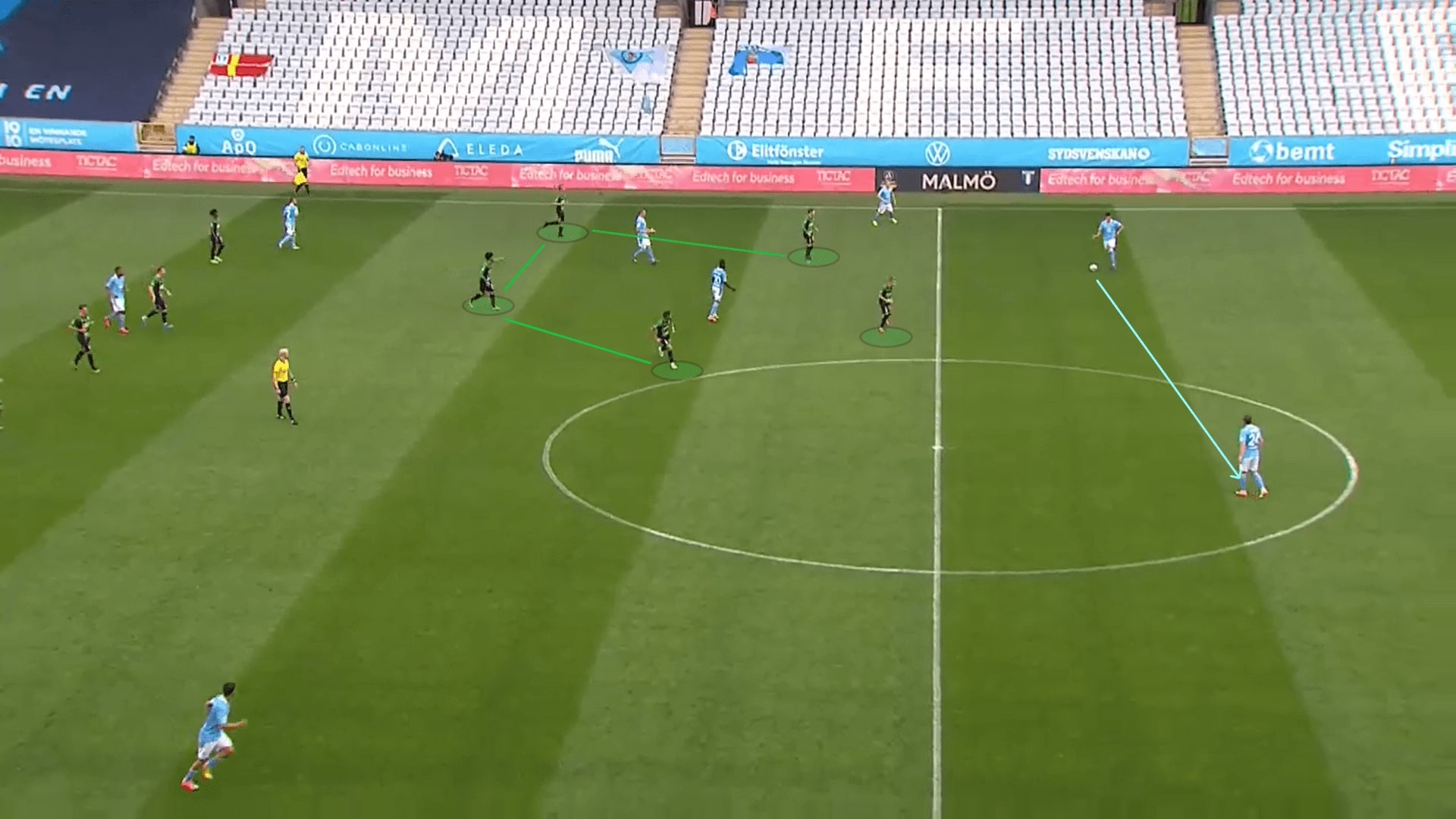 When the Malmö midfielders were receiving the ball in the central third, Varbergs pivots reacted by pressing tightly from the back. This was what Le Roux was doing here.

Sometimes these were too aggressive and resulted in a foul, but the intensity did delay the progression of Malmö’s attack. 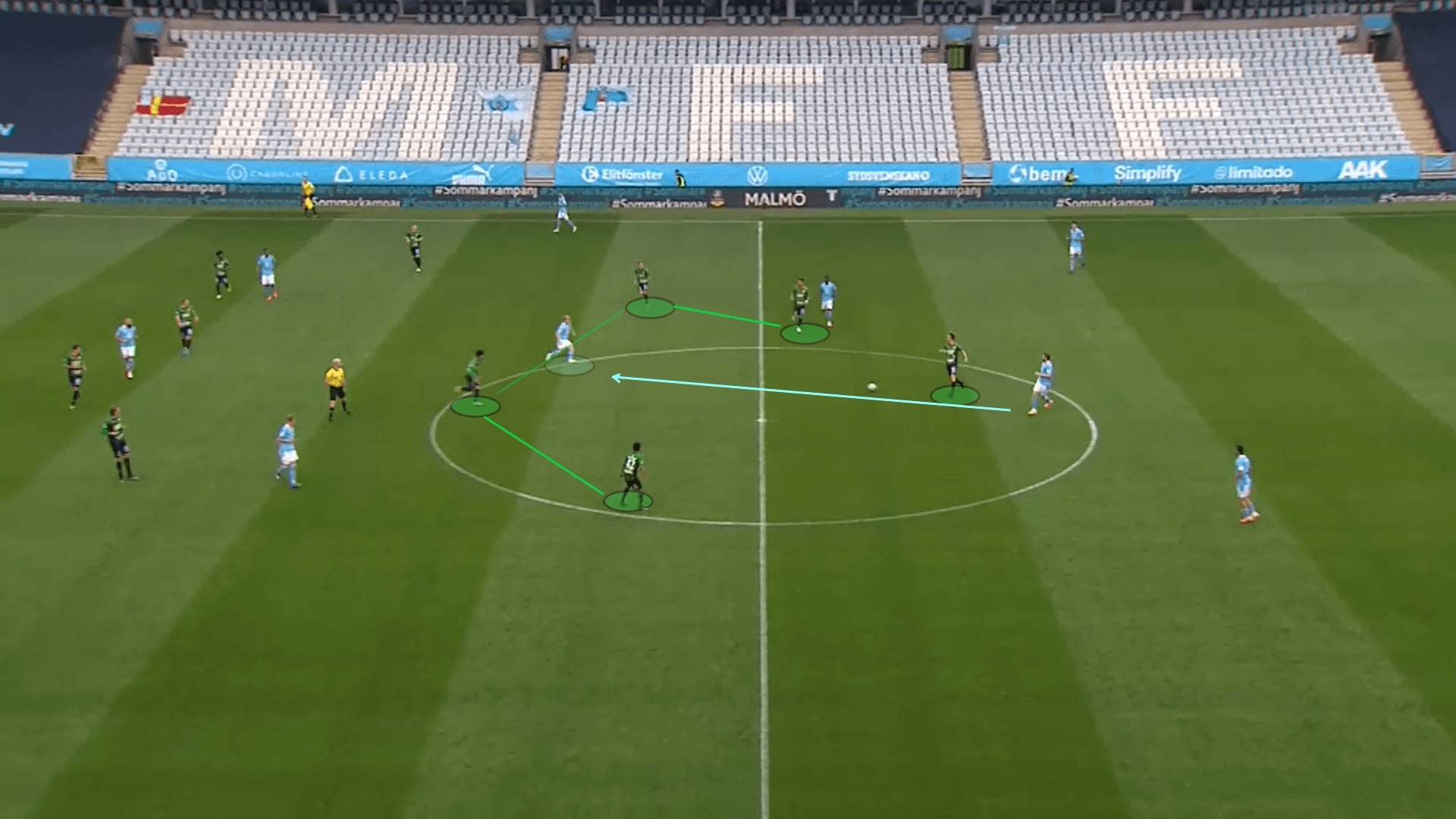 Why did the Malmö positional plays were suboptimal?

I have written the main ideas of Malmö’s positional plays in the past two match analysis, pointing out the inefficacy. However, the setups were still yet to reach satisfaction, hence, we are explaining why they failed to break the deep block.

The first reason was the conservative mentality, as Malmö never seemed to penetrate into the box. Instead, they kept passing around the block like a “U-shape” as the players at flanks were always unmarked.

In general, Innocent stayed around Rasmus Cronvall, which occupied the Varbergs striker. This bought time and spaces for the centre-backs to play the progressive passes. However, without movements to create potential spaces and options within the defensive block, the centre-backs tended to play the ball wide.

Here, as an example, Lasse Nielsen passed wide to Eric Larsson, who was the wide and free right-back. Of course, it was good to find the free man, but hardly could we expect Larsson to create the dynamics himself. As mentioned in the previous analysis, this was suboptimal. 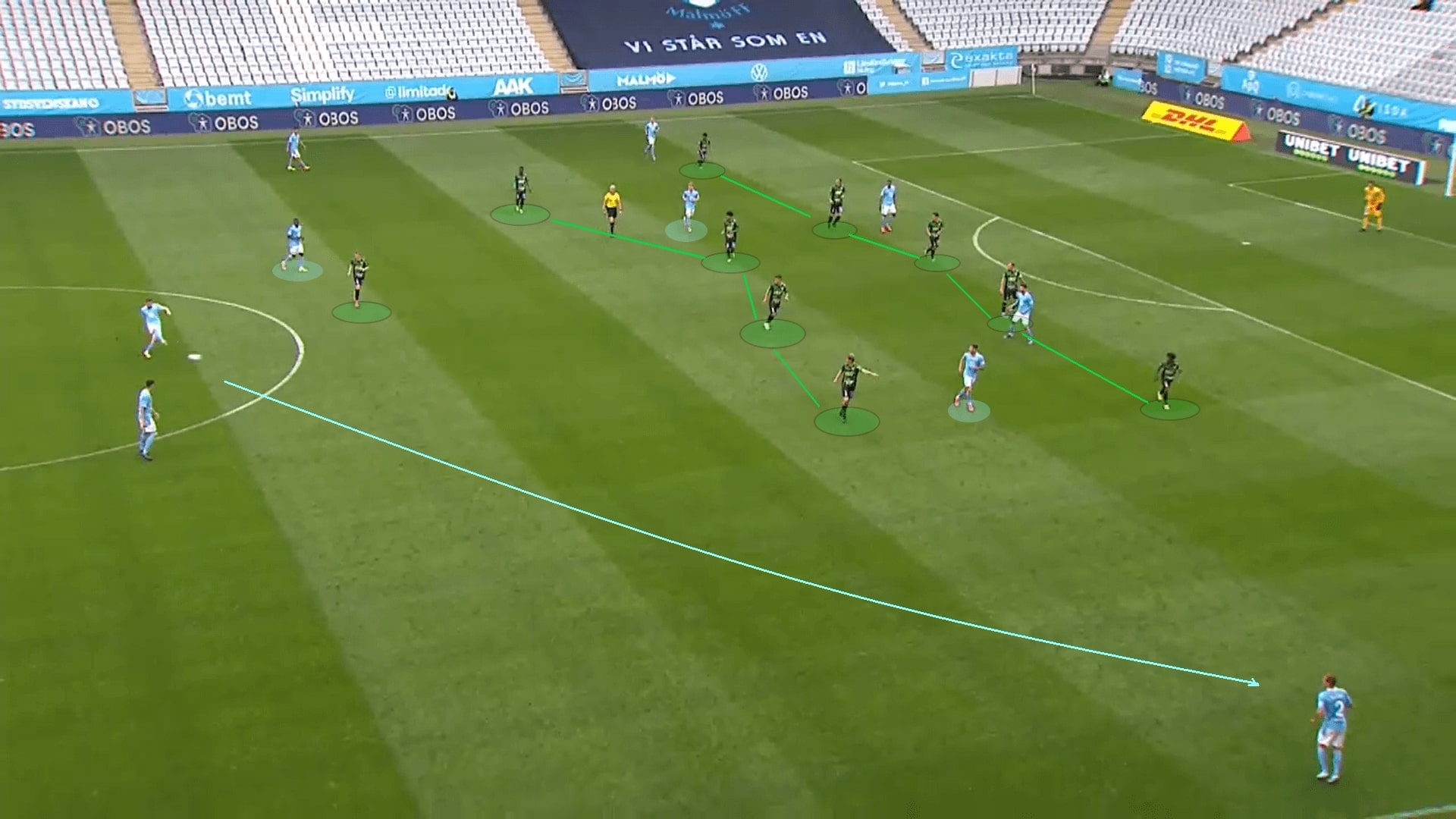 The situation was similar on the left flank. Here, Innocent delayed the pressing from Cronvall a bit and Nielsen played the forward pass again. Despite five Malmö players were staying between the second and last line, no behaviour was made to manipulate or create the decisional crisis.

And, everyone would anticipate Nielsen was passing to the left-back, and we already told the development of the story above – Varbergs just tracked all supportive runs and denied further progressions. 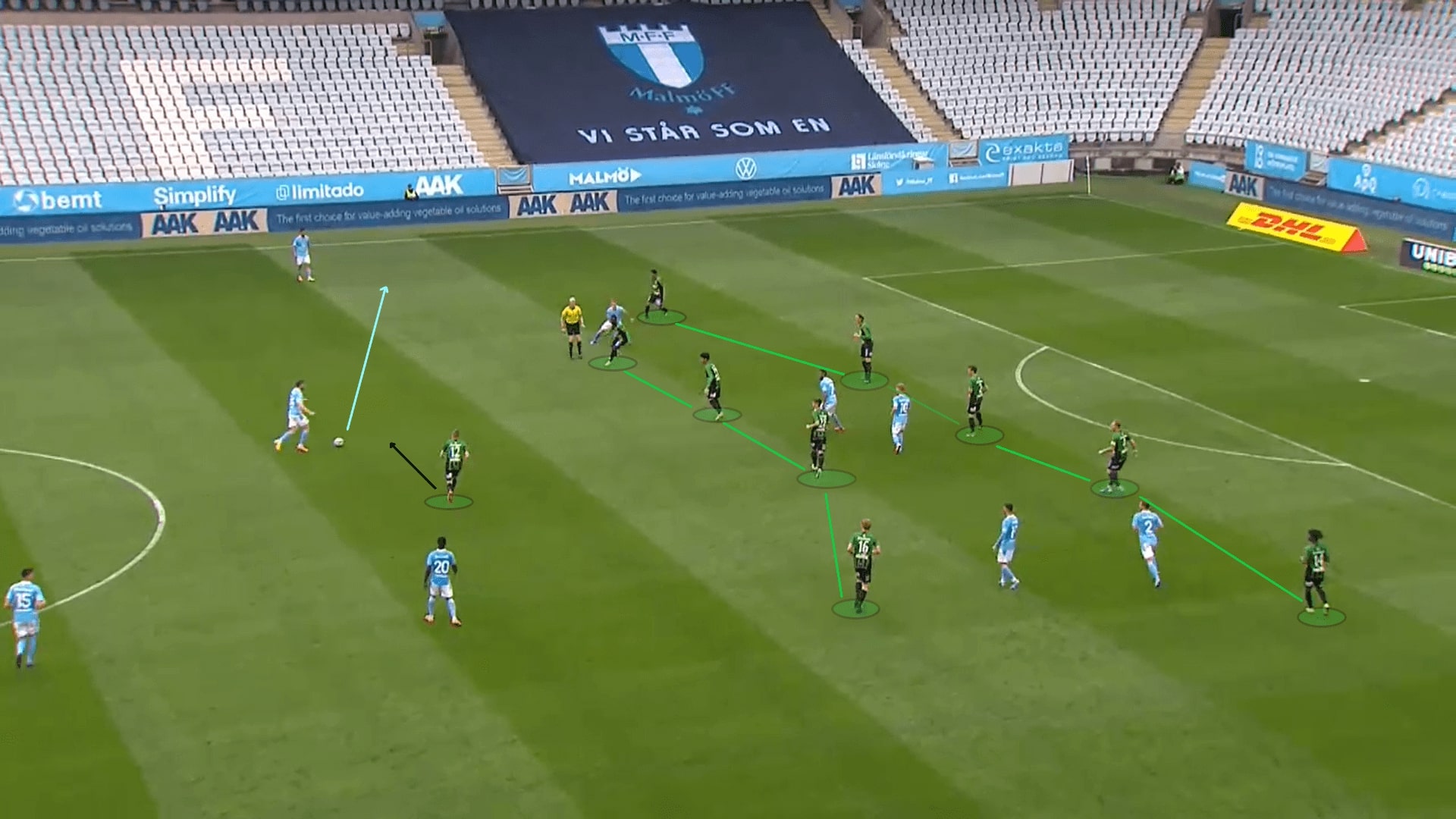 When viewing back Christiansen’s incident, I am not trying to comment on the issue. Instead, we are questioning why Malmö failed to utilize the superiorities when given spaces. It was a part of the story on failing to create the dynamics at flanks.

Right before the incident, in fact, Malmö had a 4 v 3 numerical superiority below. Larsson was his job to stay on the touchline and provided the width. The meaningful overload occurred near the last line, Rakip and Arnór Ingvi Traustason were in a 2 v 1 against Adama Fofana. Some simple behaviours such as a reversed movement and decoy runs could easily either one player free to receive a pass. However, Malmö seldom generates passing options in the final third because of the static positionings or visible movements. 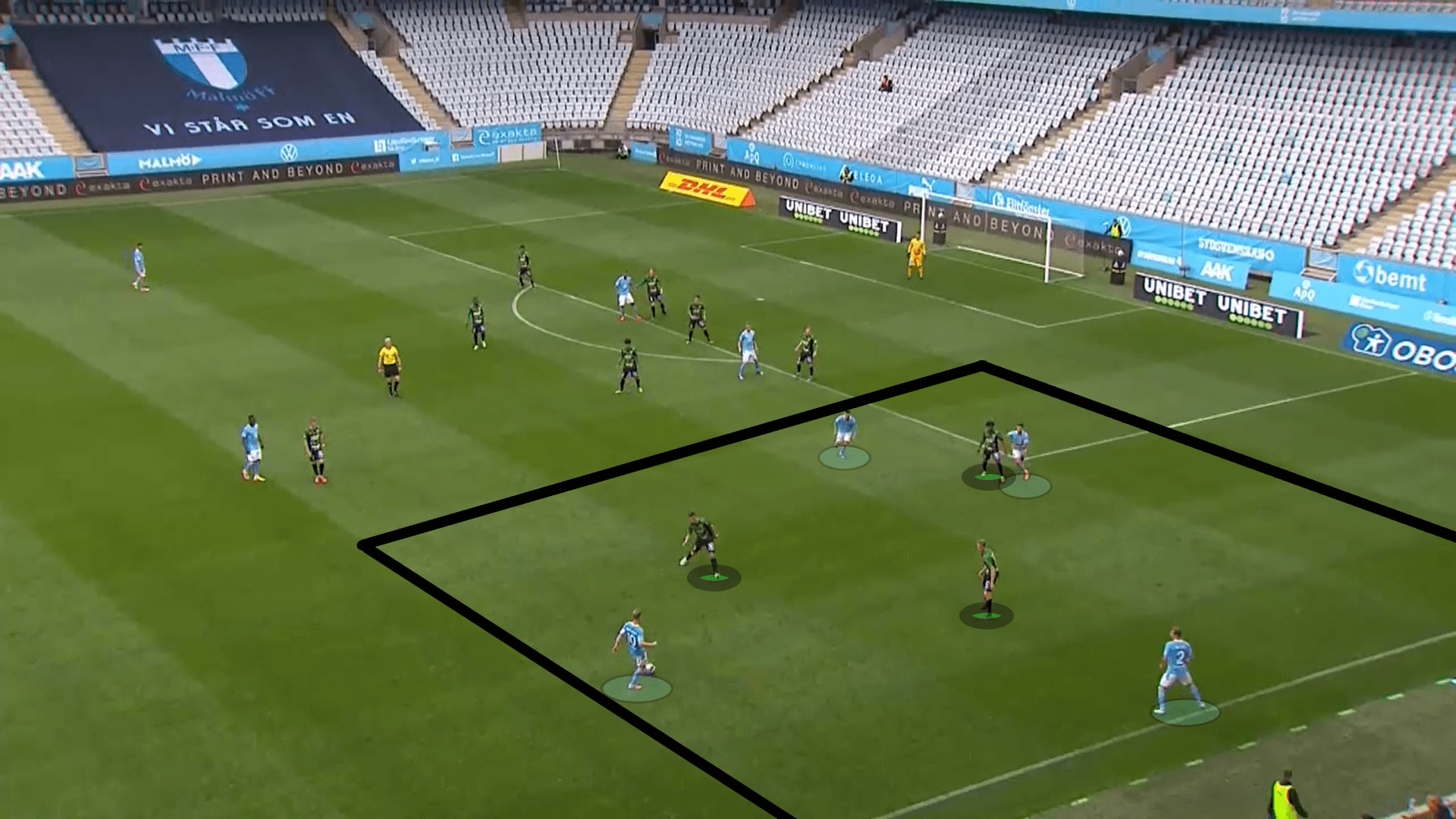 To summarize Malmö’s attacks in this game, it would be the old story of this season – always looking to attack flanks because facing a defensive block at the centre.

Below is the graph that showed Malmö’s positional attacks by flanks. 21% of their attacks were developed centrally, and this means the other 79% were coming from wide areas.

Recalling the texts above, we mentioned the full-backs were always serving as the free man. Therefore, they were the key to create the dynamics: the crossings were the best they could offer.

Since Rieks was keen to make the forward runs, several deep crosses were successful to find the target, including this example.

Here, since Trautsson was the free man to play a cross, he curled the ball in and set up a quite fine shooting chance for Rieks, who put the ball wide. 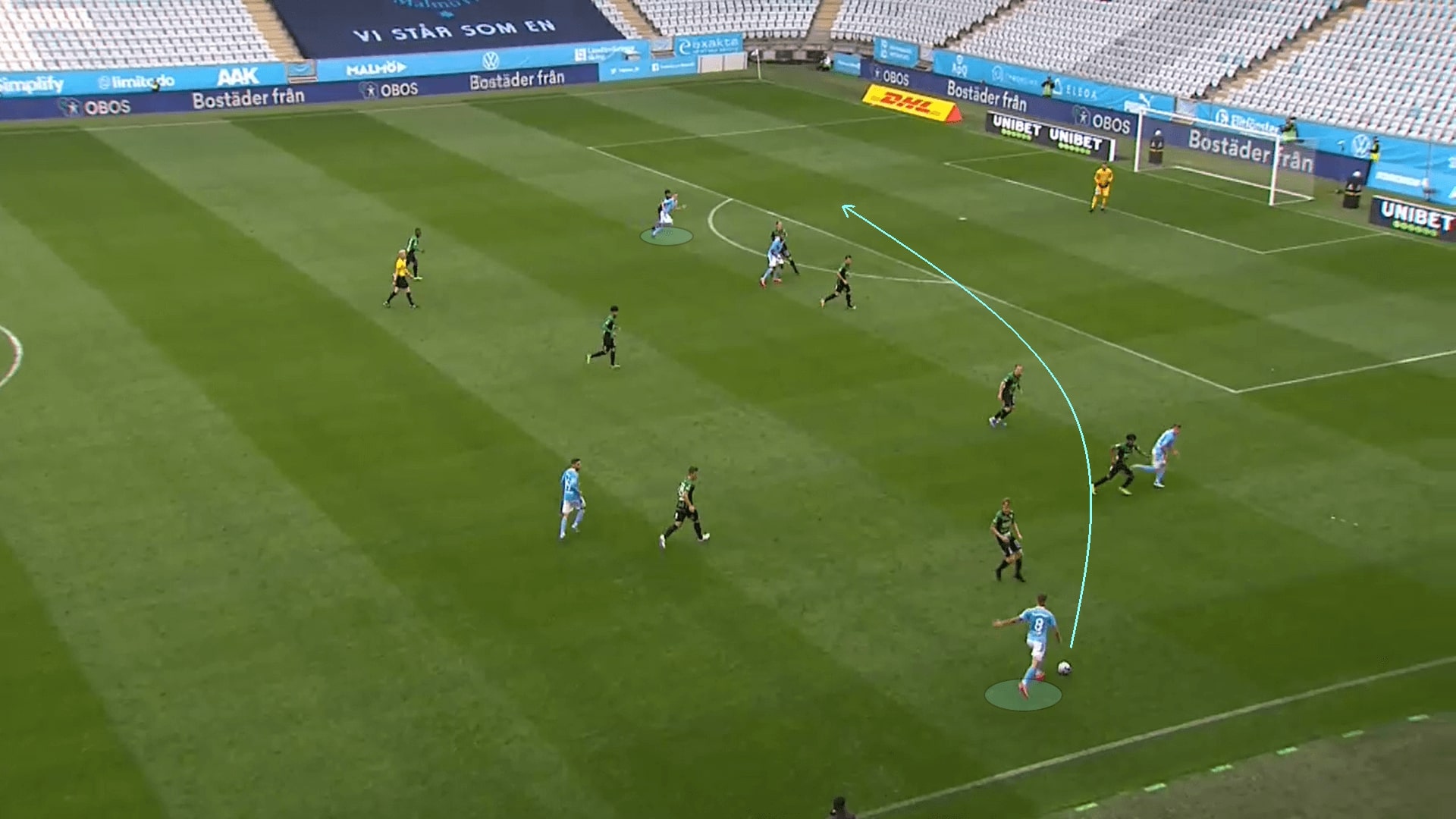 Below was the crossing map of Malmö in this game, they attempted 29 crosses and completed 37.93%, which was around the season average of 37.8%. Slightly more crosses were coming from the right flank: 55%.

Look at the positions of the crosses; most successful crosses were coming from deep, not even near to the penalty box. Larsson was a huge part of this, and he provided some accurate crosses for his teammates.

Last roll of the dice

Since Varbergs were defending passively, it did not matter greatly when playing with or without Christiansen. Malmö was still dominating the game. However, since the Danish skipper was the only player who travelled between players to disrupt lines, missing him also means losing central access further.

After switching to a 4-4-1, we often saw Malmö having a player like Innocent below, holding the ball at the centre. However, no progressive options were available at the centre, the area was filled by Varbergs players. The ball was often played wide in these cases. 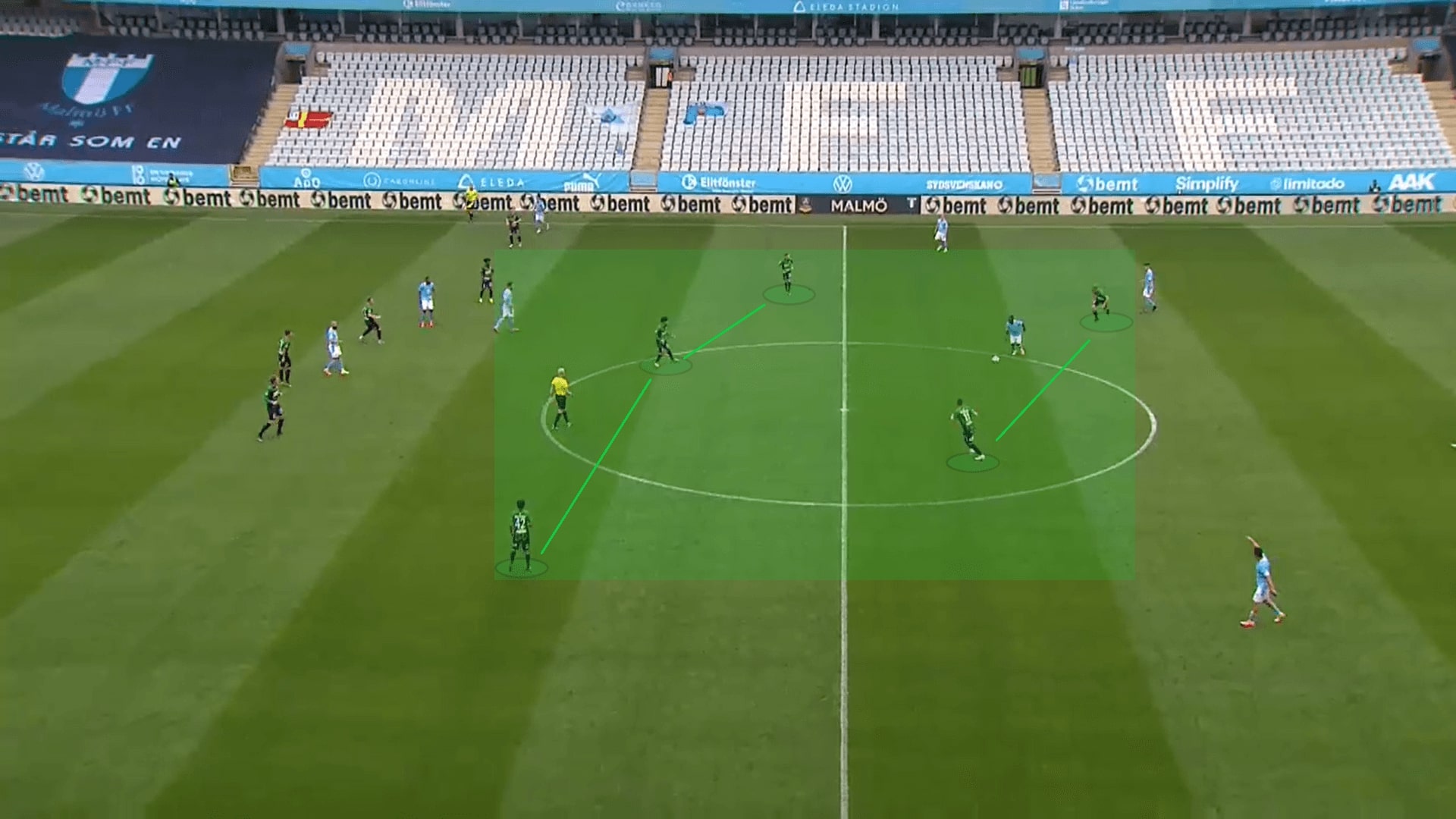 Since Tomasson wanted a goal, he even threw Molins to play as a partner of Kiese Thelin. Malmö #7 became a target man for the long balls. Playing directly helped Malmö to solve the issue above, as they could directly surpass the midfield, need not to adding a man to the midfield.

The partnership worked finely in the limited time playing together. By using either striker as a target to occupy the defenders, the other one could take the ball. Kiese Thelin actively tried four shots after the introduction of Molins.

Utilizing Kiese Thelin’s physical quality also helped Malmö to equalize, but no further reward was received in the remaining time. 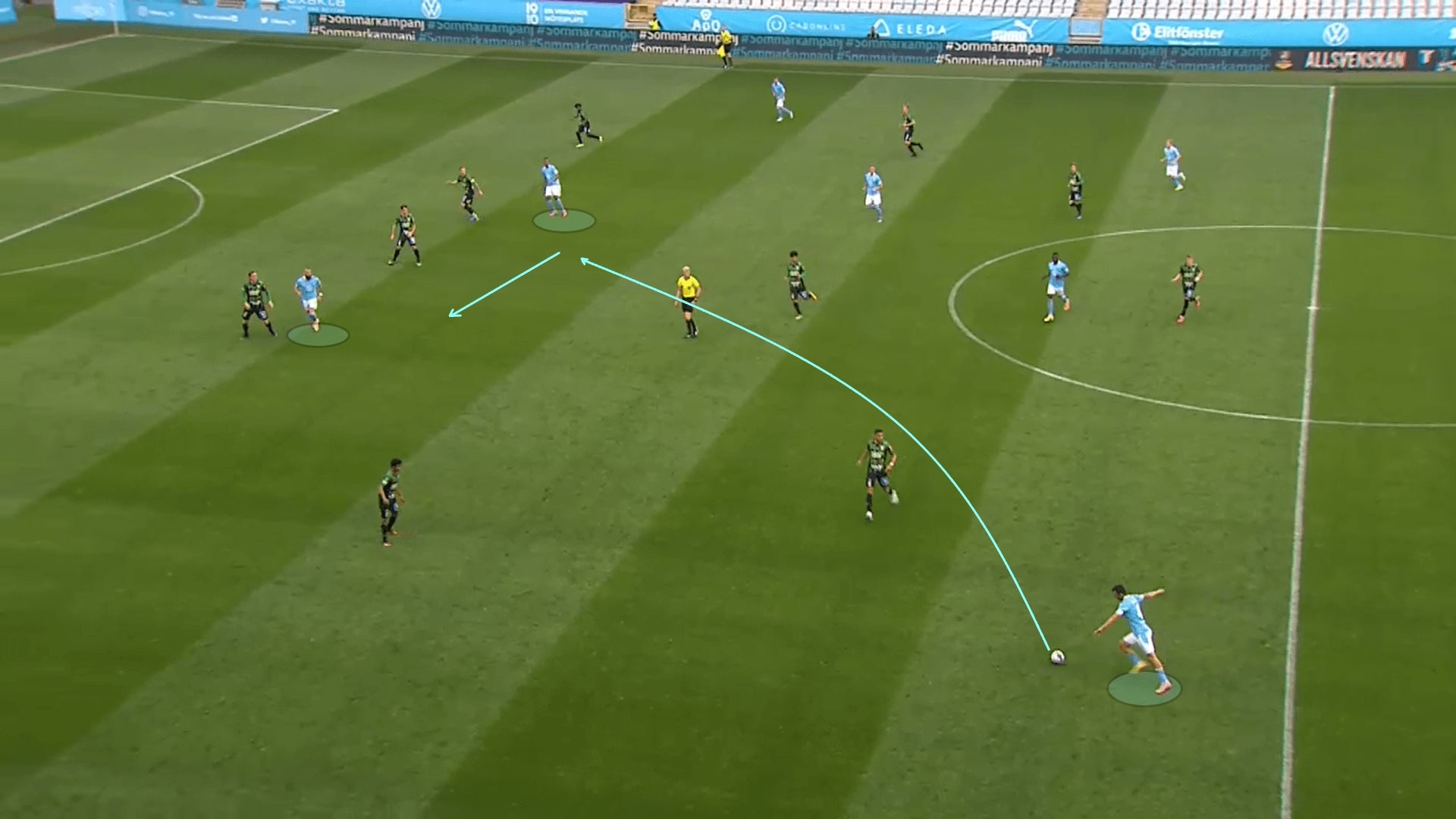 Although Christiansen was being sent off, Varbergs stuck to the plan and the counter-attacking system. Like many opponents of Malmö, they also attacked spaces behind the full-backs. Since Larsson and Safari pushed quite high, spaces were available behind them.

By deploying the wingers or wing-wing-backs very wide, Varbergs found spaces at flanks and the wide players never hesitate to play a progressive pass.

As an example, here, a diagonal ball was played to the weak side of Malmö, where Varbergs players were exploiting spaces behind Larsson. 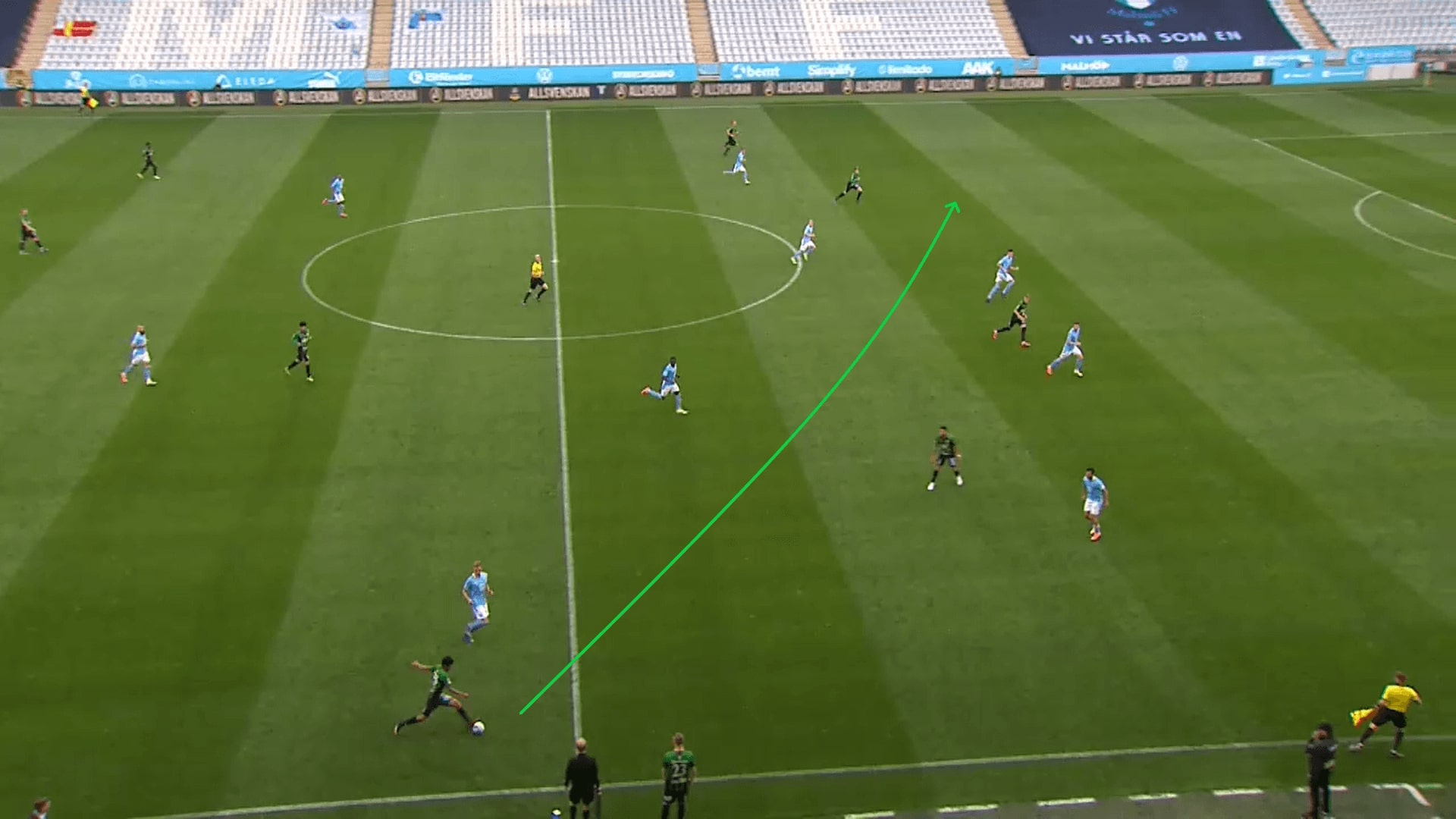 The tactics also led to two goals. The first one by Alexander Johansson was an early recognition of spaces behind Larsson, hence, moving to exploit the region quicker and get behind the defence for a long ball.

This was the second goal, where Malmö were being exposed in a transition. Looking for the wide players were a key to initiate the attack. It began with the wide pass. 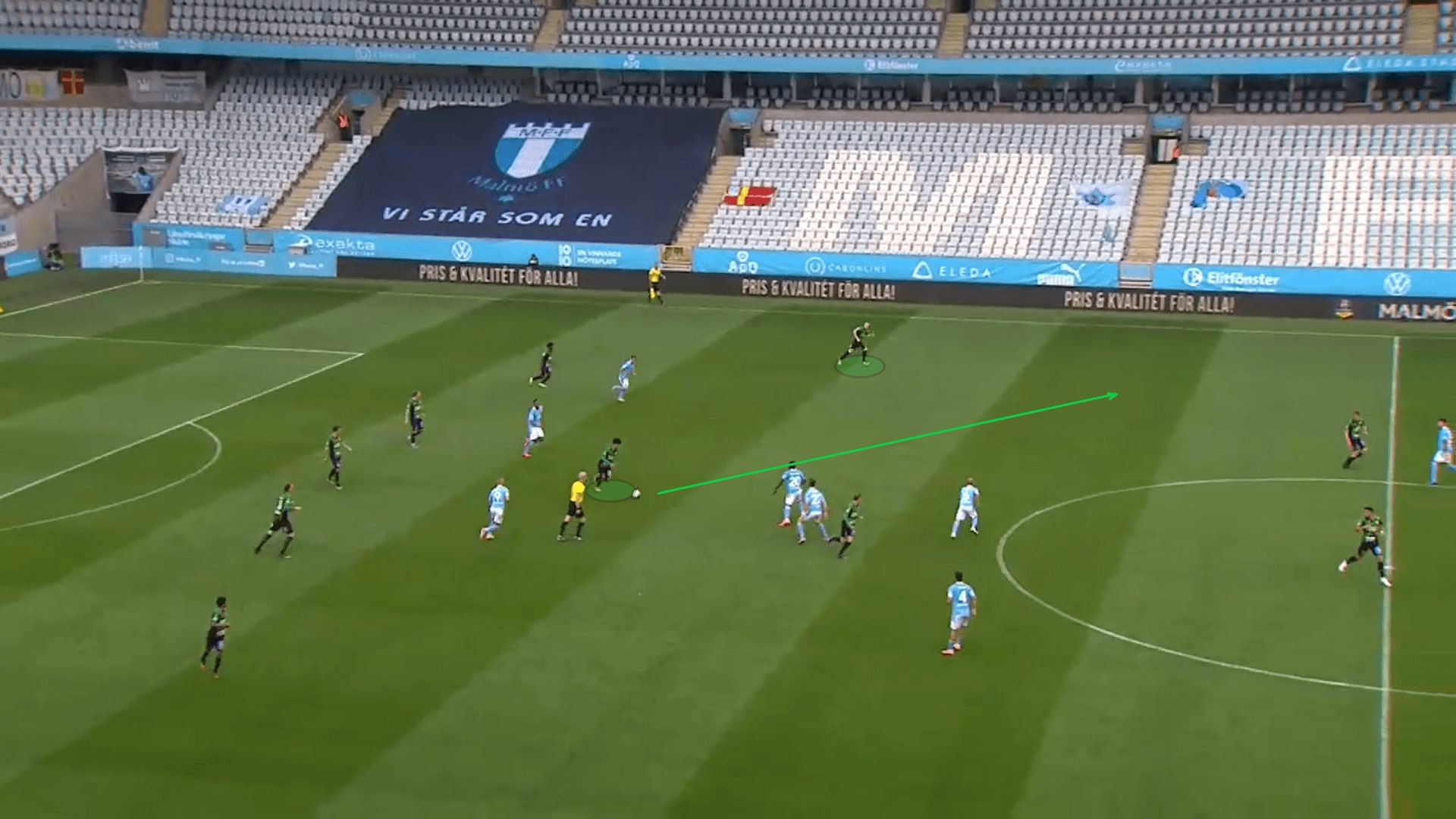 Larsson was yet to recover his ground and Anton Liljenbäck carried the ball forward. Although Lewicki intended to stop him, he left the central option: Gustaf Norlin received the ball with room and scored.

Also, a goalkeeping error from Johan Dahlin, he should have saved this goal. 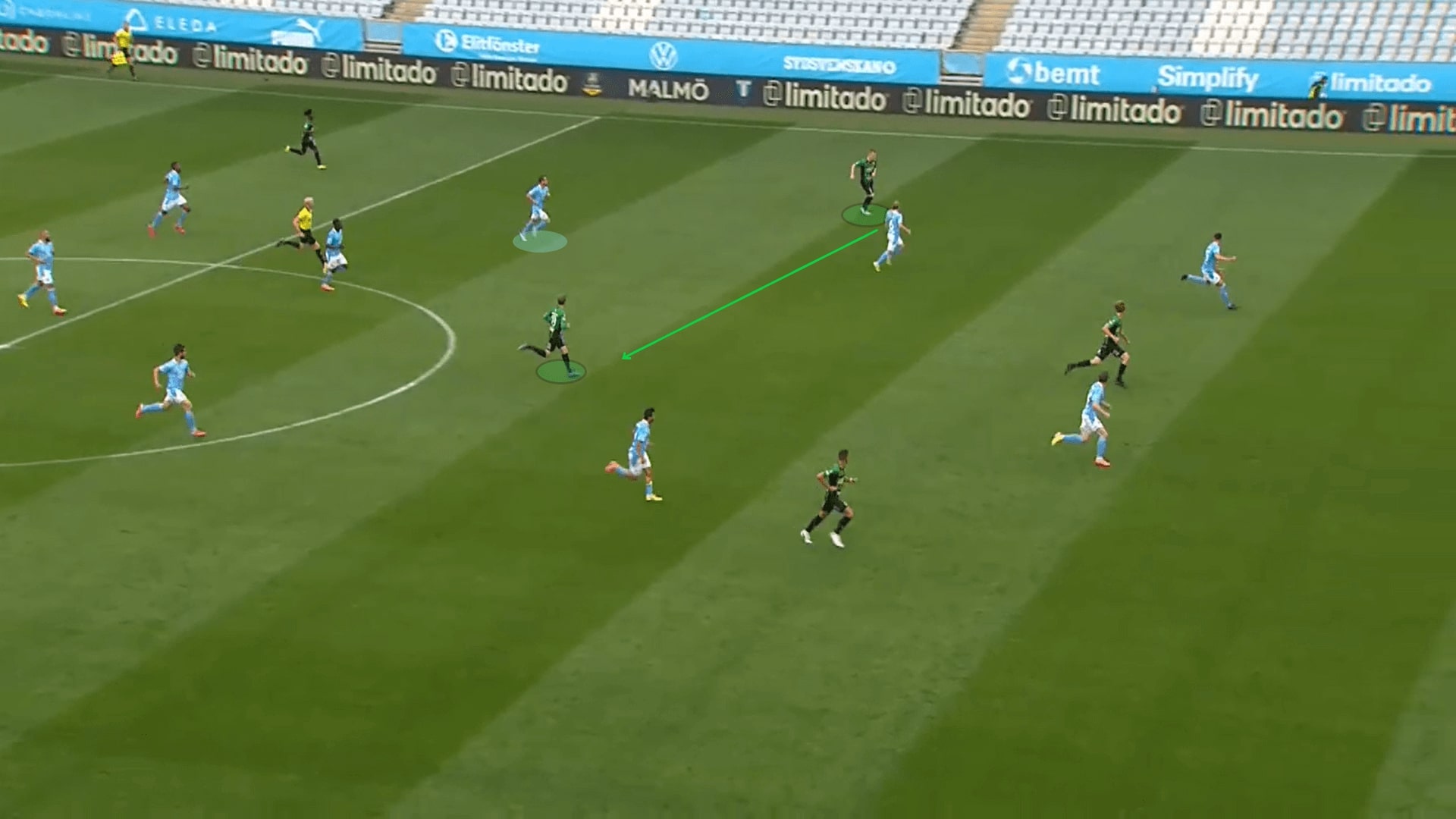 Only having 0.35 xG away from home, Varbergs seized the chance to find the back of the net. They were disciplined enough to maintain the deep and compact block that Malmö struggled to break. It was their 4th point and now they sit at the sixth on the table!

Malmö, again, trying to play out from the back in the first phase, using some crosses to generate goal-scoring opportunities in the final third. Their 1.75 xG was definitely better than the opponent, but it seems whether playing with 10 or 11 players makes no huge difference. Maybe, they made the game difficult.