Exeter City booked their place in the EFL League Two play-off final, after beating Colchester United 3-2 on aggregate. The U’s entered the second leg with a 1-0 lead from the first leg, but this was wiped out after ten minutes thanks to a goal from Exeter’s Aaron Martin. Left wing-back Jayden Richardson put the Grecians in front after 58 minutes, but the visitors hit back 20 minutes later through Courtney Senior.

The sides couldn’t be separated at full time, but Exeter’s top scorer Ryan Bowman hit the winner in the second half of extra time.

This tactical analysis will focus on the tactics used by both sides, in what was a very eerie semi-final in front of an empty St James’ Park.

Matt Taylor opted for his usual 3-5-2 system. Jon Maxted started between the sticks, behind a back three of Pierce Sweeney, Aaron Martin, and Dean Moxey. Jayden Richardson replaced Jack Sparkes at left wing-back, whilst Randell Williams retained his place on the other side. Former Rangers man Nicky Law kept his spot in the midfield, alongside Jake Taylor. The only alteration in the engine room was Archie Collins coming in for Nigel Atangana. Ryan Bowman started up front alongside Alex Fisher, who replaced the injured Lee Martin. 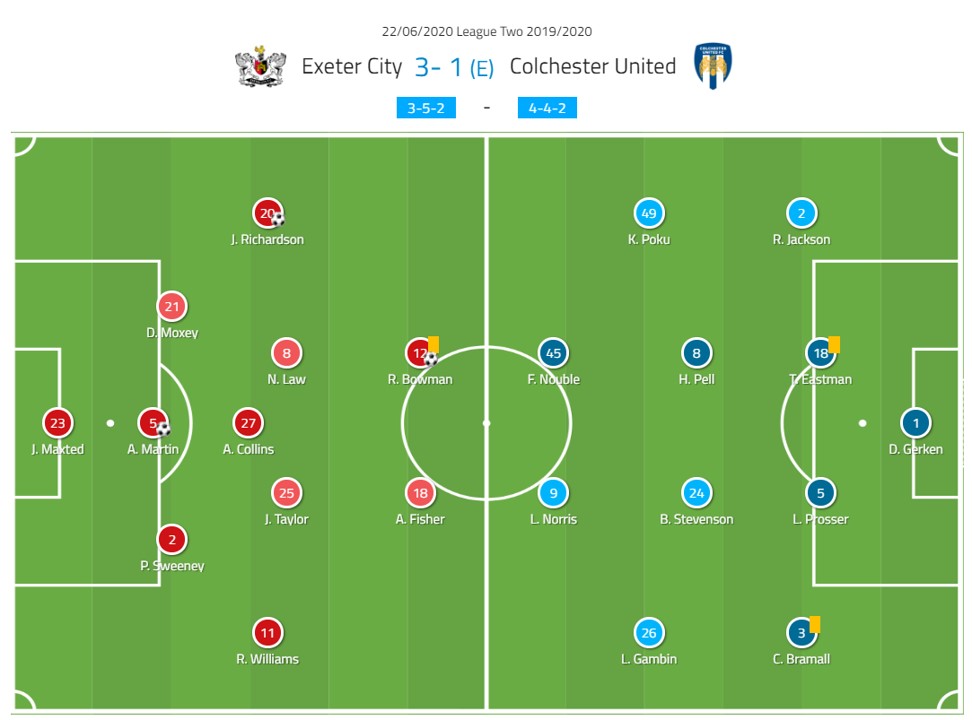 Colchester started with a 4-4-2 system. Dean Gerken started in goal. Former Arsenal man Cohen Bramall played at left-back, with Tom Eastman, Luke Prosser and Ryan Jackson making up the rest of an unchanged back four. Ben Stevenson and Harry Pell played as central midfielders, with Luke Gambin and Kwame Poku played out wide. Franck Nouble played alongside but sometimes just behind Luke Norris.

First of all, the analysis will focus on how Exeter began the clash on the front foot. Before the game, Grecians manager Matt Taylor told the press his team needed to start quickly: and that’s exactly what they did. In the opening leg, star man Randell Williams struggled to make an impact on the game. The 23-year-old, who has 14 assists to his name, only managed 54 touches of the ball on Thursday night. He managed two key passes, attempted eight crosses and 0 shots.

But in the second leg, Williams touched the ball 82 times, the second-highest number behind Exeter’s right-sided centre-back Pierce Sweeney. He played five key passes, attempted 11 crosses and had five shots. Although there’s the caveat of the game going to extra time, those numbers still show how much more involved he was in this encounter.

He received possession in deeper areas in the first leg, which limited the influence he had on the game going forward. However, in the return leg, the Grecians focused on getting him higher up the pitch. In the image below, he’s pushed right up onto Colchester left-back Cohen Bramall. 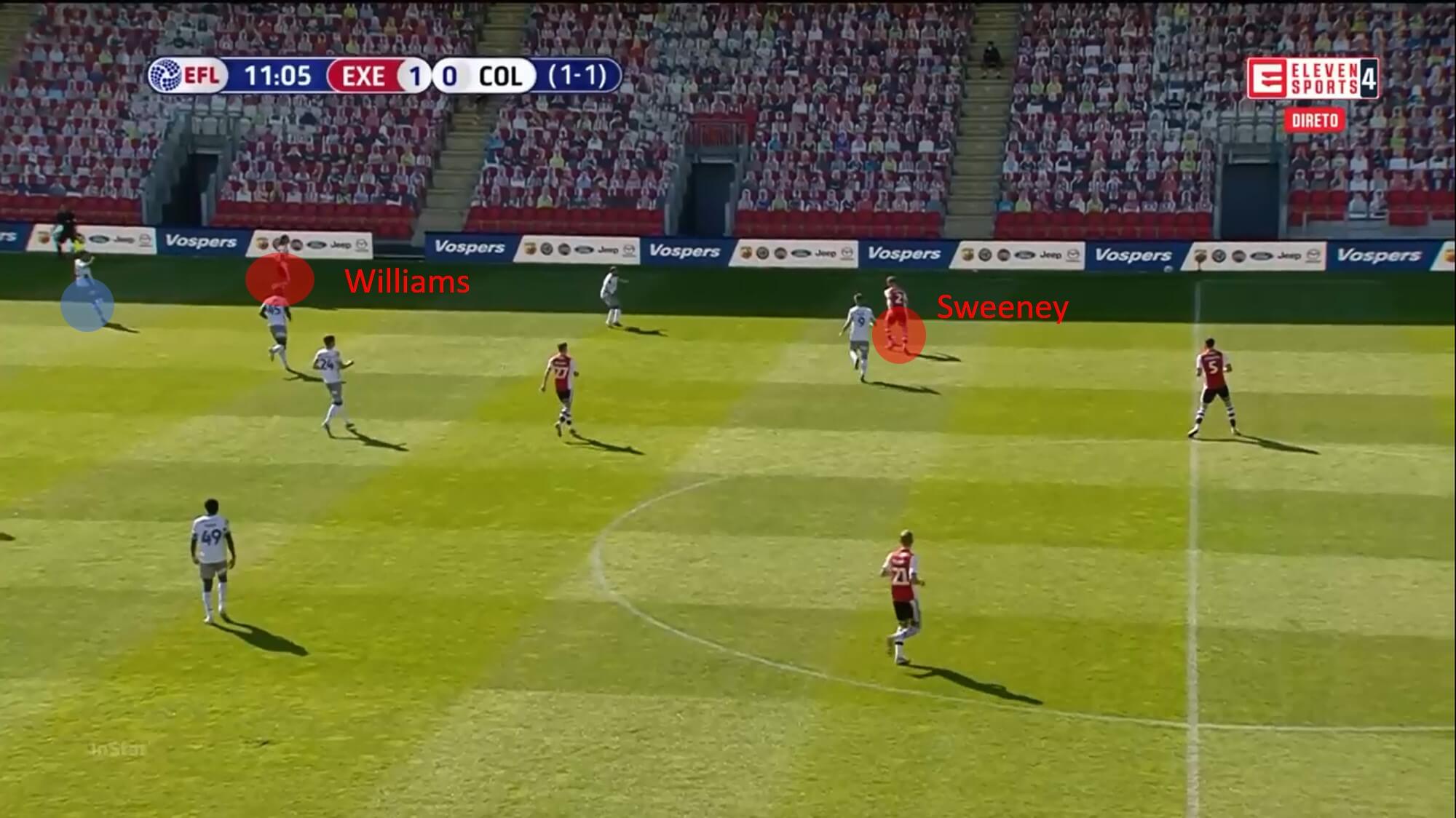 Sweeney is given the freedom to push out into the half-space so he can play a more vertical pass either to Williams, or striker Alex Fisher, who constantly ran the channel. On this occasion, Williams’ position pins Bramall out wide, giving space for Fisher to run into the inside right channel. Sweeney played the ball over the top into Fisher’s path. By doing this, he drags Colchester’s left-sided centre back into a wide area, where’s he’s less comfortable defending. Williams makes the supporting run out wide, giving them a 2v2 situation. Sweeney was given license to remain in the half-space as an out ball, in case the Grecians needed to recycle possession.

Exeter were very comfortable when playing directly, again focusing on getting Williams involved higher up the pitch. On paper, he played as part of a back five, but he constantly looked to get in behind the defence. 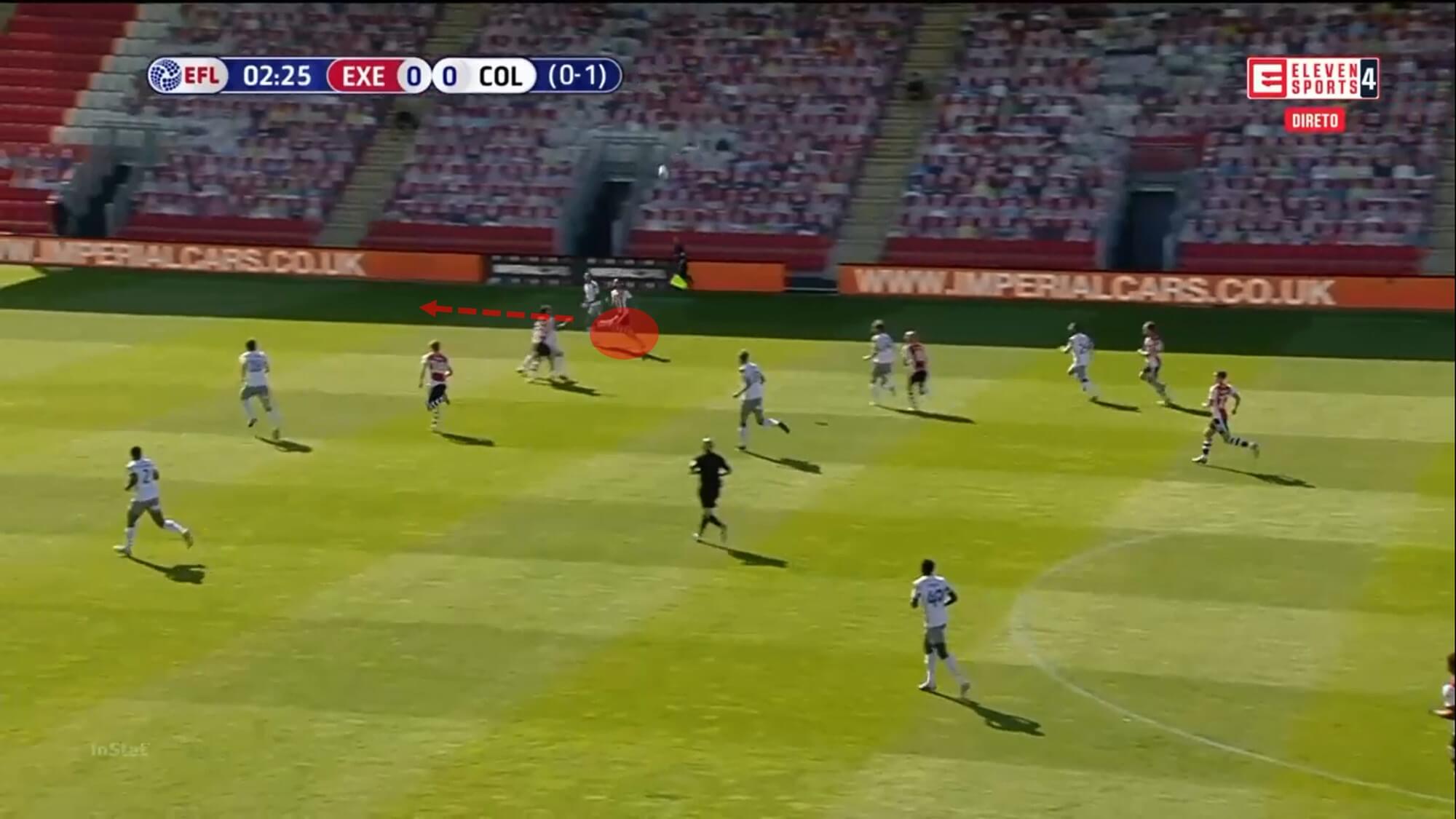 In the image above, Ryan Bowman had moved into the inside right channel to compete in an aerial duel with the centre back. Williams gambles on his teammate winning the header, attacking the space in between the U’s left-back and central defender, who had pushed slightly out of the defensive line to try to win the header.

Exeter’s main method of attack was to play direct balls into the right channel, create overloads and get crosses into the box. Another way they did this was by allowing central midfielder Nicky Law to drift wide, like in the image below. 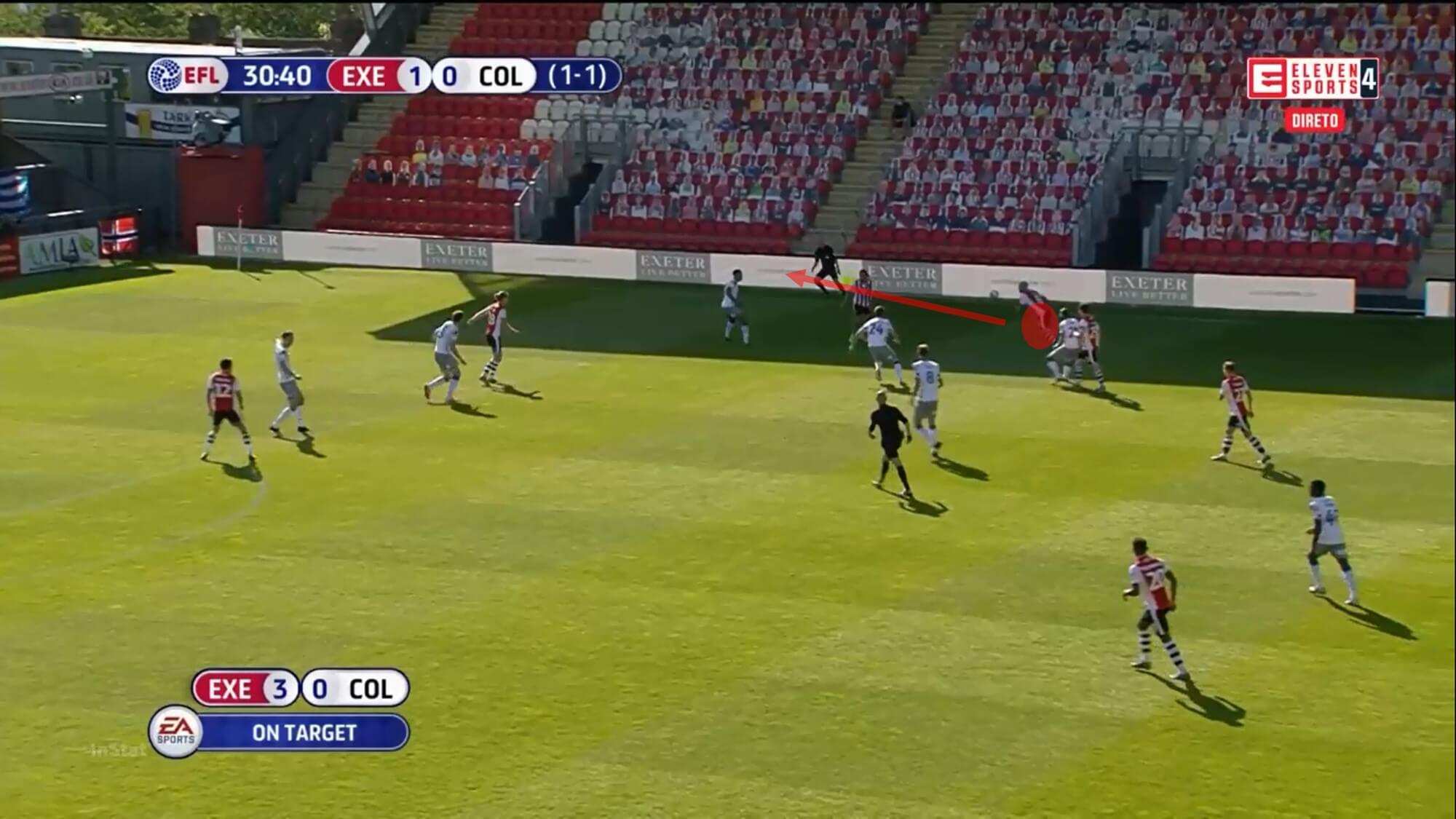 This simple decoy run was effective, as it gave more space for Randell Williams to work the ball onto his left foot. Bramall had to make sure he wasn’t pressing Williams on his left side too aggressively, because he’d be leaving the door open for him to slide the ball into Law’s path. These unselfish runs were a key part of how Exeter attacked.

Matt Taylor’s side threw plenty of bodies into the box when they were attacking, as they sought to make the most of their crossing opportunities. Colchester responded to this by overloading their area when defending. As you can see in the image below, eight of Colchester’s outfield players are in their own area, with the other two just outside the box. 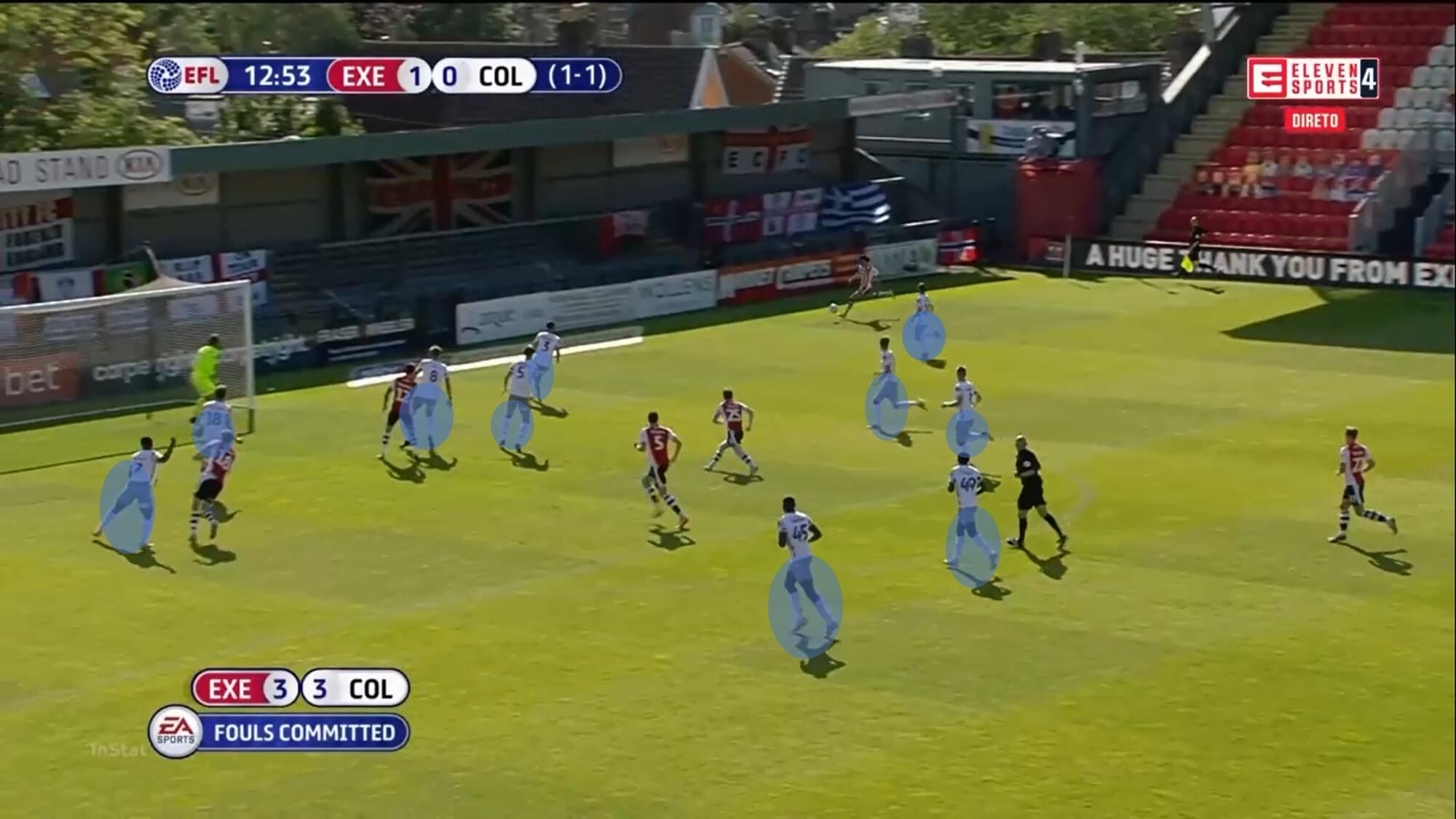 This meant that when John McGreal’s side managed to clear the ball, they had nobody forward to try and hold the ball up. Therefore, Exeter were able to start another attack from the back under very little pressure, which meant Colchester had more defending to do and it became difficult for them to get out.

Even after the home side drew themselves level in the tie, they continued to force the issue with their direct football and high pressing. In particular, they looked to counter-press quickly whenever they lost possession. The image below demonstrates their counter-pressing structure, and how they attempted to suffocate their visitors in their own half. 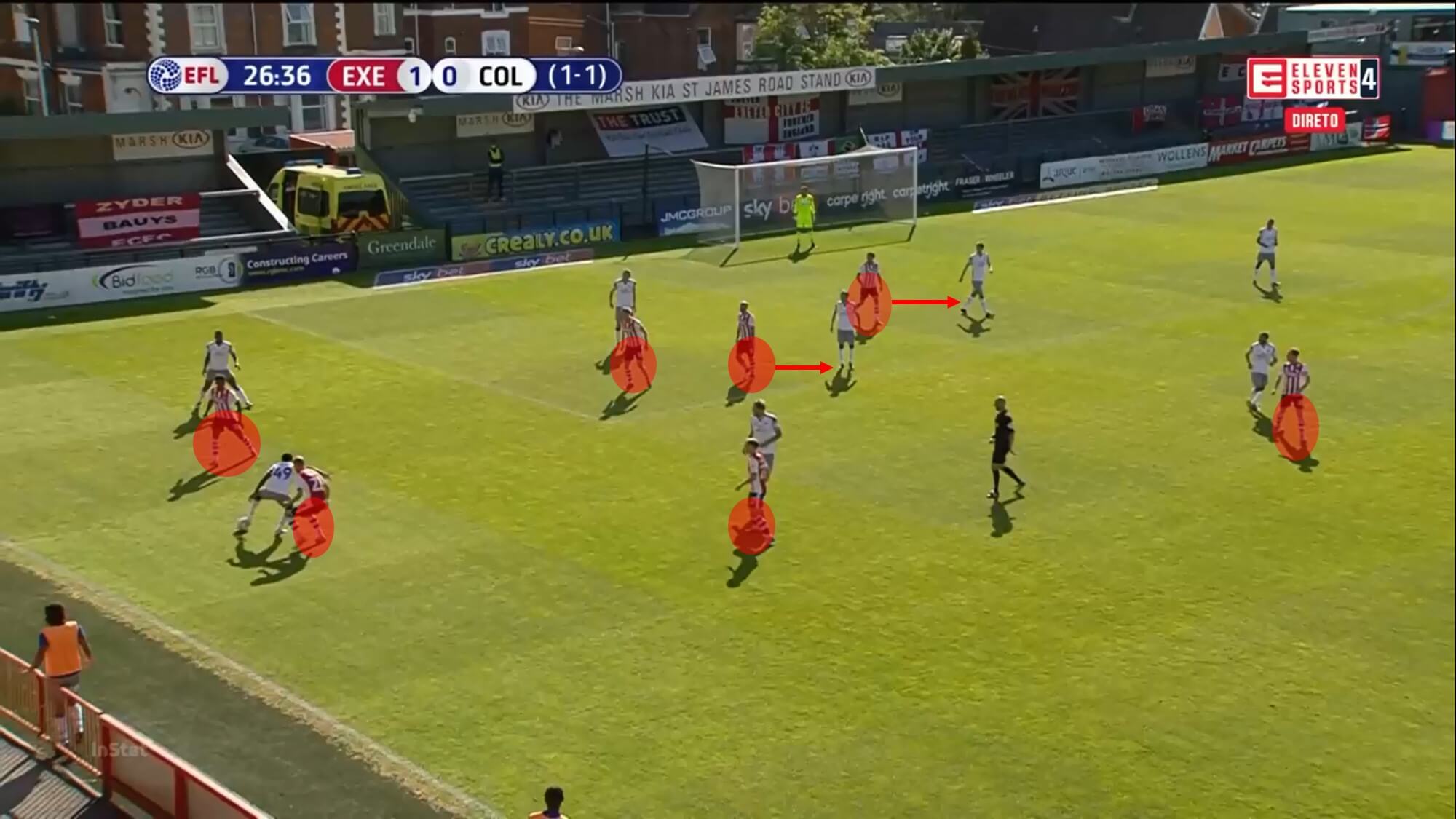 As you can see in the image above, Exeter have opted for a man-to-man counter-pressing structure. Kwame Poku is on the ball deep in his own half, facing his own goal, with left centre back Dean Moxey advancing high up the pitch to press him. All of his simple passing options are cut off, because Exeter are going man-to-man high up the pitch. This meant Colchester had to opt for a long pass, which made them more likely to lose the ball.

However, counter-pressing comes with the risk of leaving yourself short at the back if the opponents can beat the press. Colchester managed to do this a few times. 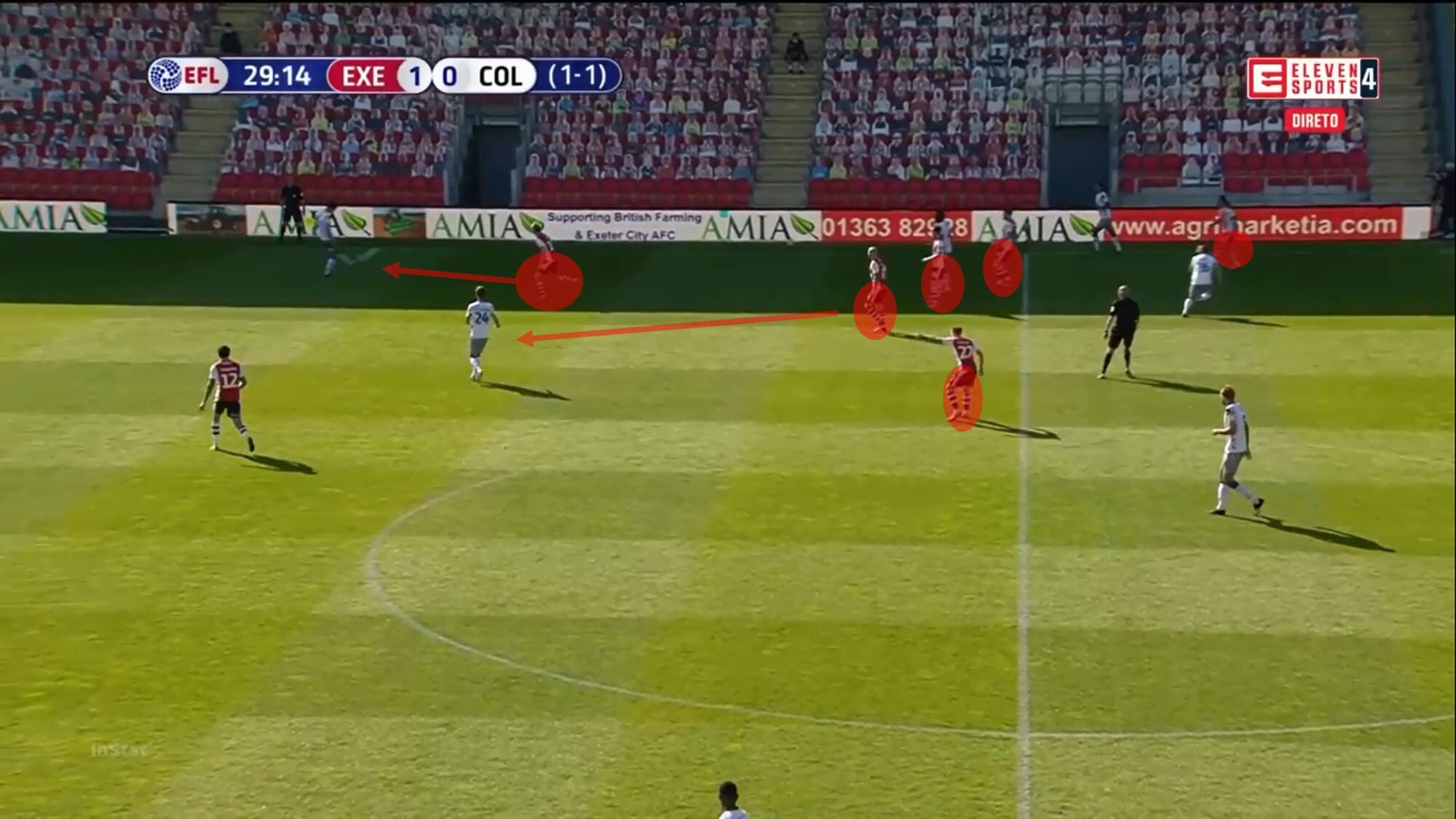 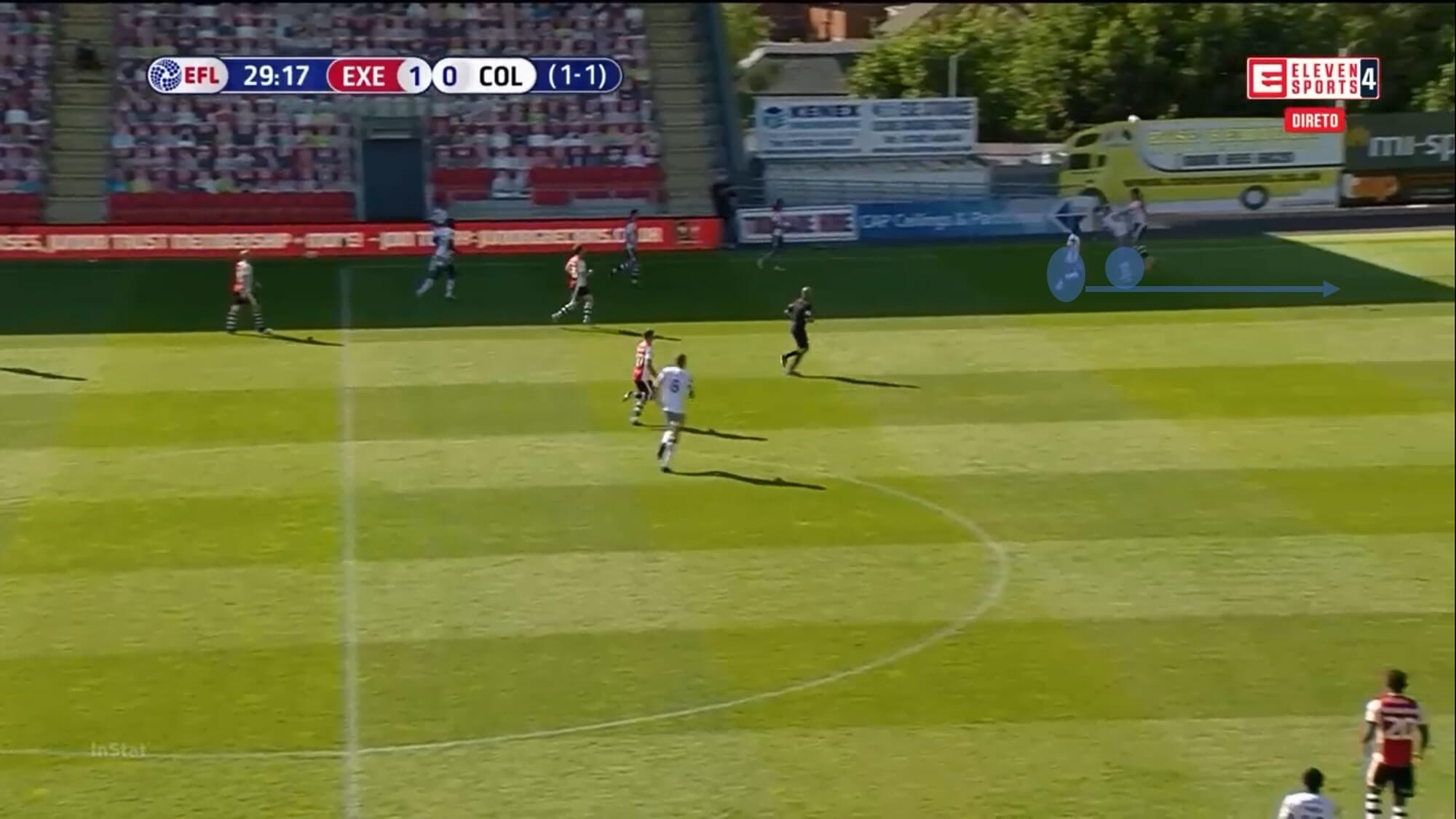 In the two images above, Exeter’s players focused on pressing up higher, to stop the visitors being able to progress the ball by playing a pass into midfield. However, they were able to play an aerial pass into their frontman Luke Norris. The lack of bodies back for Exeter meant that Luke Gambin had plenty of space to gamble in behind if Norris won the header. He was able to get onto the ball, before earning a free-kick for his team.

The second half started in a similar vein, and Exeter managed to get themselves ahead in the tie. However, Colchester began to attack more and started to get on top. Not only did they equalise, but they finished the game strongly and should have won it late on through Kwame Poku. Exeter still tried to play on the front foot, but they seemed to run out of steam. It’s difficult to keep that intensity of pressing up for 90 minutes, particularly when the players have only just returned from a three-month break.

Colchester were helped by the introduction of striker Theo Robinson after 70 minutes. He was able to use his pace to get in behind the Grecians’ high defensive line, and it helped them stretch the game much more. They switched to a 4-2-3-1, with Poku coming more central. Franck Nouble played on the left, and substitute Courtney Senior played on the right.

Exeter’s three-man midfield proved very difficult to play through, so the U’s concentrated on creating wide overloads. A natural weakness of the 3-5-2 system is that it can be easy for the opposition to create 2v1 and 3v2 overloads in wide areas, because a wing-back doesn’t have a winger in front of him to track back and help. Franck Nouble used his power to run the channels, and Cohen Bramall got forward more.

The attack-minded Randell Williams struggled to deal with this. Right-sided centre back Pierce Sweeney was often dragged out wide to deal with the threat, which created more space for Robinson in the middle. Poku buzzed around in the central role, often popping up on both wings to create 3v2 situations if the wide centre backs came out wide.

When you’re forced to play extra time in a play-off fixture after three months out, it’s less about footballing ability and more about who can muster up enough energy reserves to see them through the clash. Colchester finished the 90 minutes on top, but it was Exeter who coped with the rigorous demands of extra time far better. They managed eight shots, whereas Colchester only managed three.

John McGreal’s side seemed to lose their organisation, and individual players switched off as tiredness got the better of them. Colchester’s defensive line was much deeper after the 90 minutes had finished, as you can see in the example below. 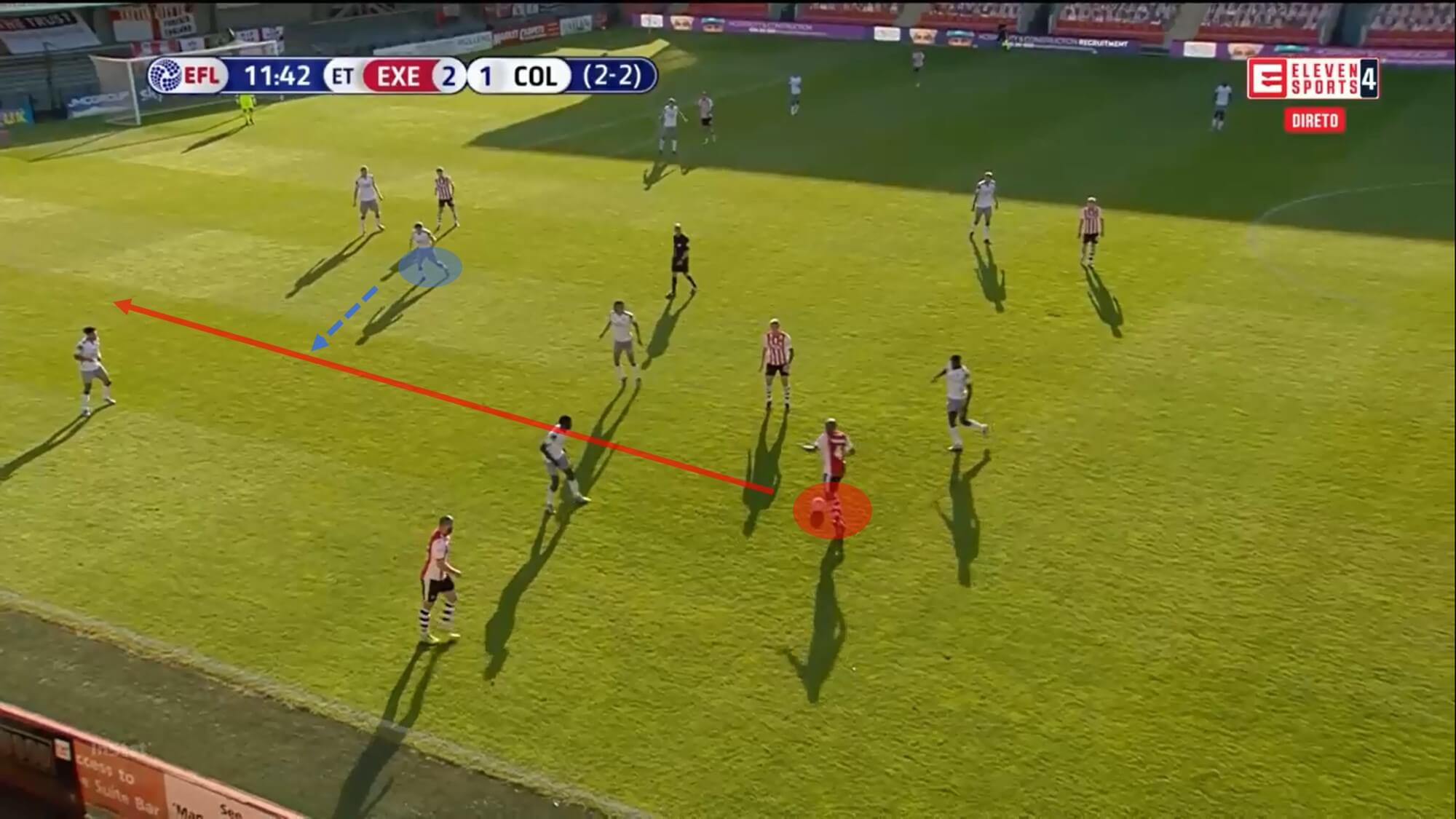 Substitute Nigel Atangana had plenty of U’s players around him, but nobody shut him down. Therefore, he was able to play a simple pass through to Jayden Richardson. George Lapslie (circled) makes a mistake, as he doesn’t plug the gap between Luke Prosser and Miles Welch-Hayes. If he’d have reacted quicker, then he could have intercepted that pass. Lapslie was a substitute, and Colchester’s replacements struggled to get used to the pace of the game, whilst their starters were tiring.

In the second half of extra time, the U’s tried to attack more in transition. This resulted in them playing with a higher defensive line, which requires every defender to be fully alert. However, in the 110th minute, Luke Prosser (circled) switched off. 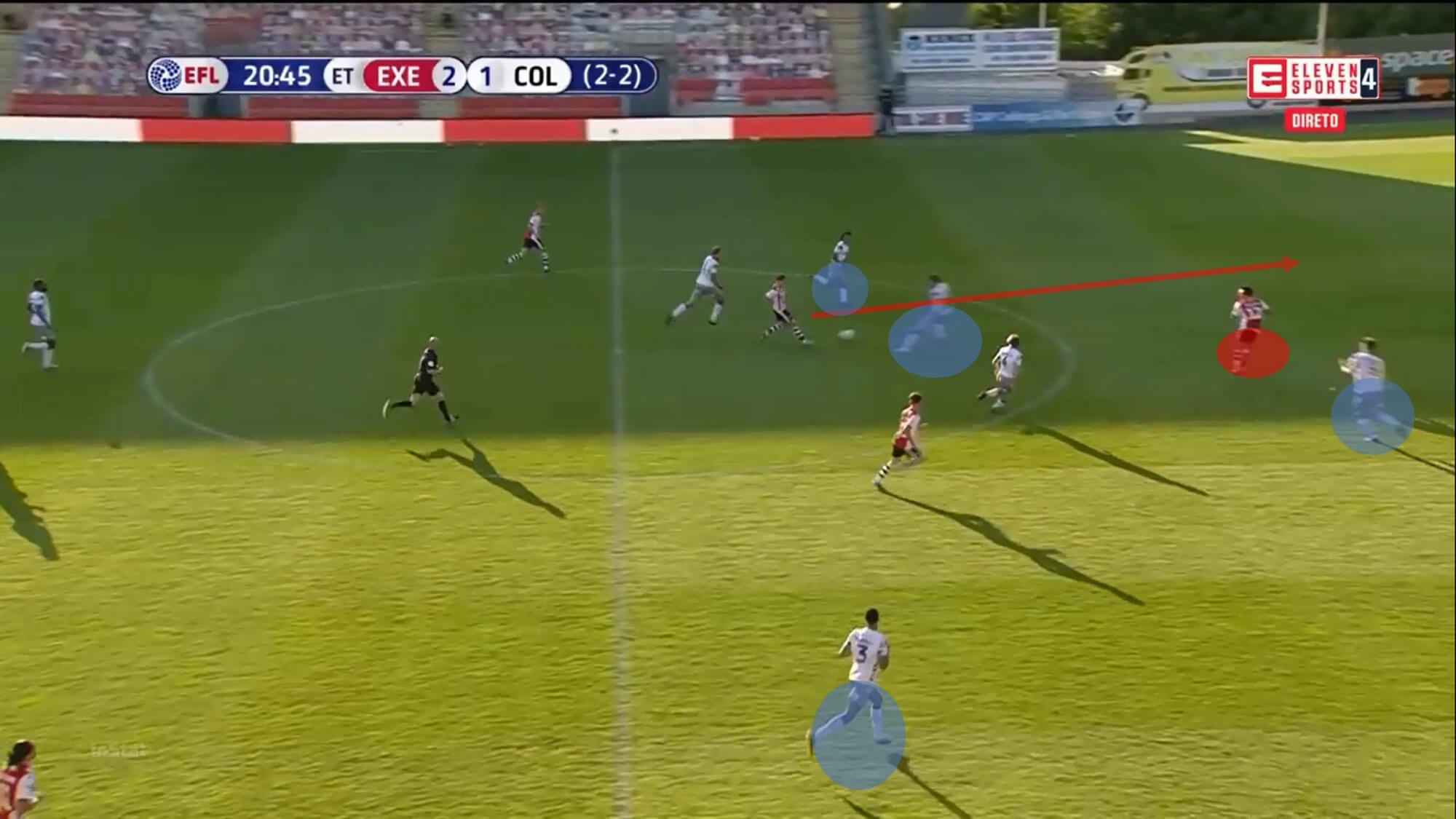 The rest of the Colchester backline had stepped up, but he didn’t follow. Exeter turned possession over, and Prosser was playing Ryan Bowman onside. He was slotted in, and from there he scored the winning goal.

Exeter City will take on Northampton Town in the League Two play-off final, after the Cobblers overturned a 2-0 scoreline from the first leg to win 3-2 on aggregate against Cheltenham Town. Overall, Exeter did deserve the victory on the night. Despite the lack of a crowd, the clash was still absorbing, tense and unpredictable; exactly how a play-off game should be.

Both teams had their spells of dominance. Exeter were much better in the first half, but Colchester bounced back in the second period and finished the game very strongly. However, the Grecians came good in extra time, somehow finding a second wind to drag themselves over the line.