On paper, this was the game to watch out for this weekend. RB Leipzig are of course involved in the Bundesliga title fight that Bayern Munich are beginning to take control of, whilst Bayer Leverkusen are involved in their own tussle for a top-four spot, following a promising 2020 so far.

Leipzig will be disappointed to have come away from this with a draw, dropping points in the title race, but in reality, they were lucky to even get that and it is in fact Leverkusen who will be coming away from this game rueing missed chances.

This tactical analysis discusses the tactics used by both Julian Nagelsmann and Peter Bosz, and gives an in-depth analysis of how Bayer Leverkusen frustrated Leipzig whilst creating plenty of chances for their own. 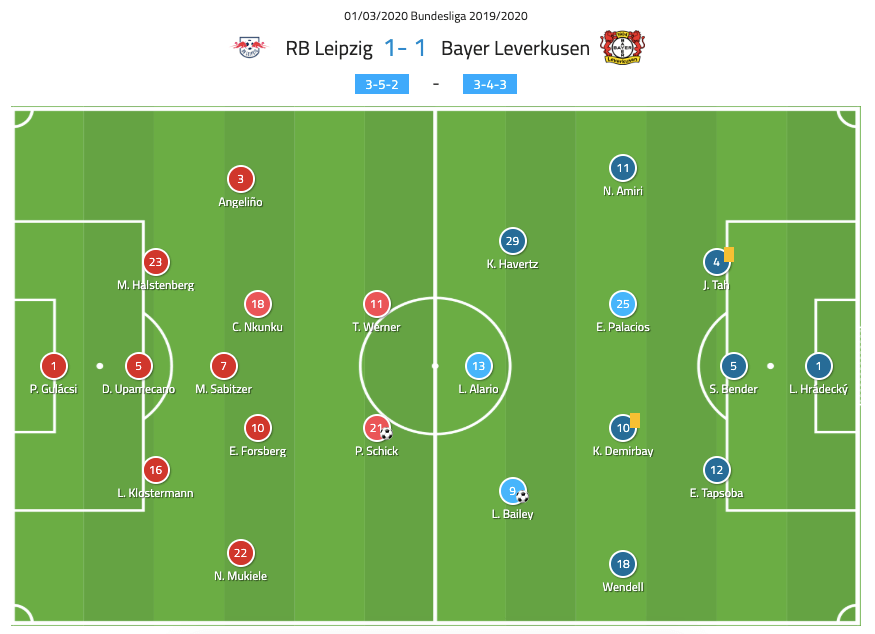 Leipzig continued with their 3-5-2 with an interesting midfield three consisting of Christopher Nkunku and Emil Forsberg playing as attacking central-midfielders in front of Marcel Sabitzer who anchored the midfield.

Leverkusen played a 3-4-3 with Exequiel Palacios partnering Kerem Demirbay in central-midfield, whilst Moussa Diaby was left out for Leon Bailey.

Unsurprisingly Leverkusen dominated possession due to their heavy possession-based style. On top of this Leipzig aren’t necessarily a side who desire large swathes of possession themselves (their 5-0 win over Schalke last week came with 46% possession). So plenty of the game involved Leverkusen looking to build patiently with their back three circling the ball and over the course of the game they had 12 possessions which lasted longer than 45 seconds. 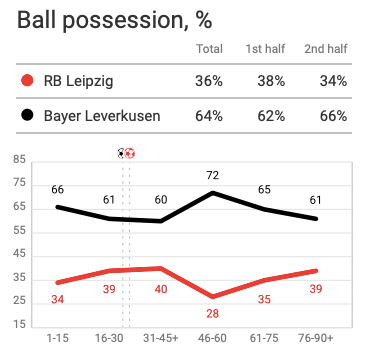 Leverkusen played out from the back with a diamond formation, their back three spreading wide as they played out, whilst Demirbay, and Charles Aránguiz (when he came on in the second half), dropped in as the pivot.

We can see this diamond in the image below whilst the rest of the side push up high, making Leipzig drop back too. 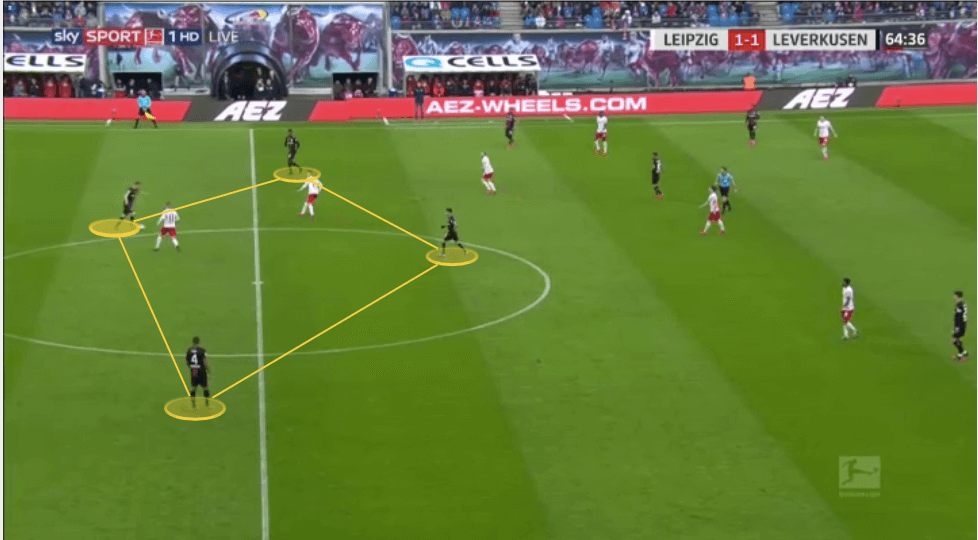 With Leipzig sitting deeper defensively, Leverkusen had more joy with quick interchanges in wide areas, however, found the centre of the pitch crowded, with the home side prioritising the protection of central passing lanes. 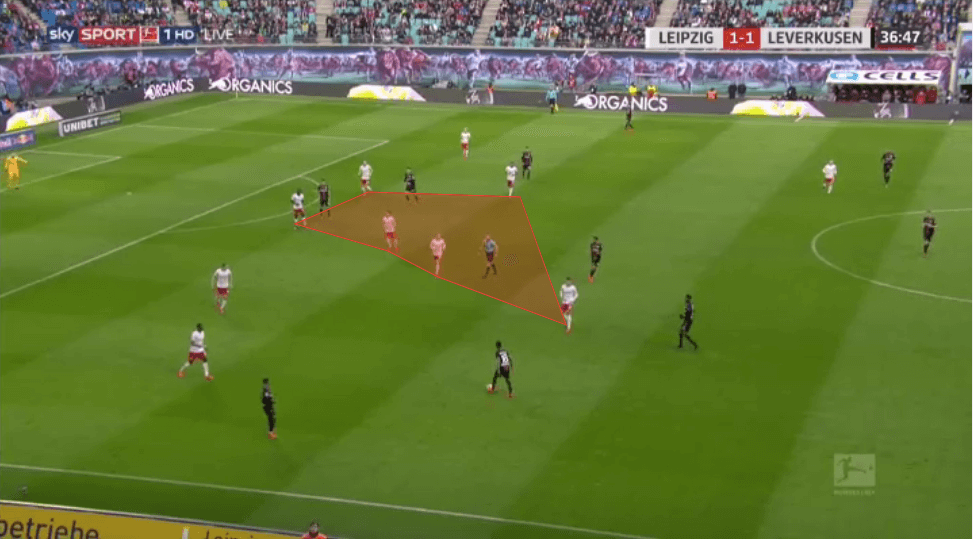 One route of attack we saw them explore frequently over the course of the game was the long ball over the top in the channel with Edmond Tapsoba and Jonathan Tah looking for Kai Havertz and Bailey in the half-spaces. 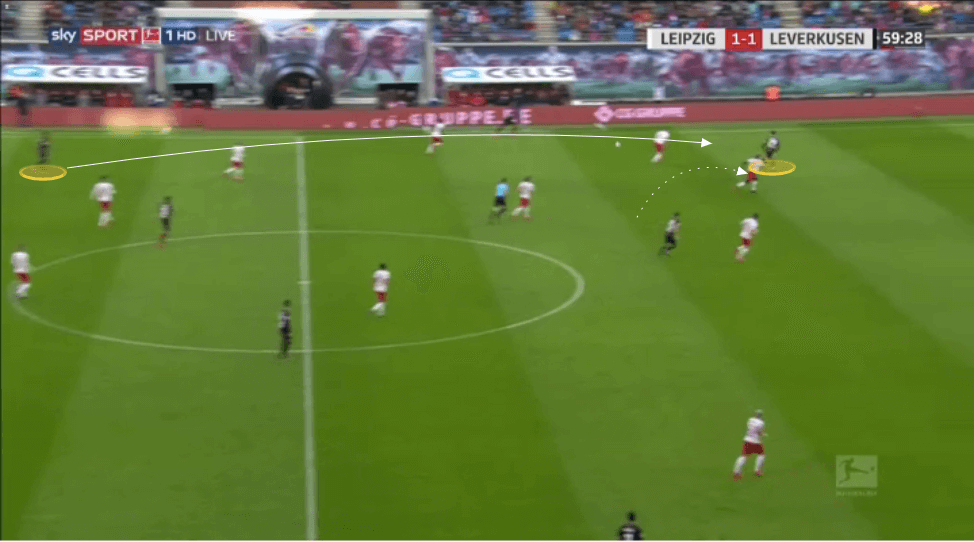 Bosz looked to draw Leipzig’s defence forward and hit the space in behind, and with the ball on either side of Leverkusen’s back three, they were able to create space to attack.

The image below shows Tah in possession on the right side of the back three. The wing-back Nadiem Amiri stays wide and draws Leipzig’s left wing-back Angeliño forward.

At the same time, Havertz drops deep himself, drawing Marcel Halstenberg forward as well. By doing so he creates enough space for Tah to hit the ball into, over the top. 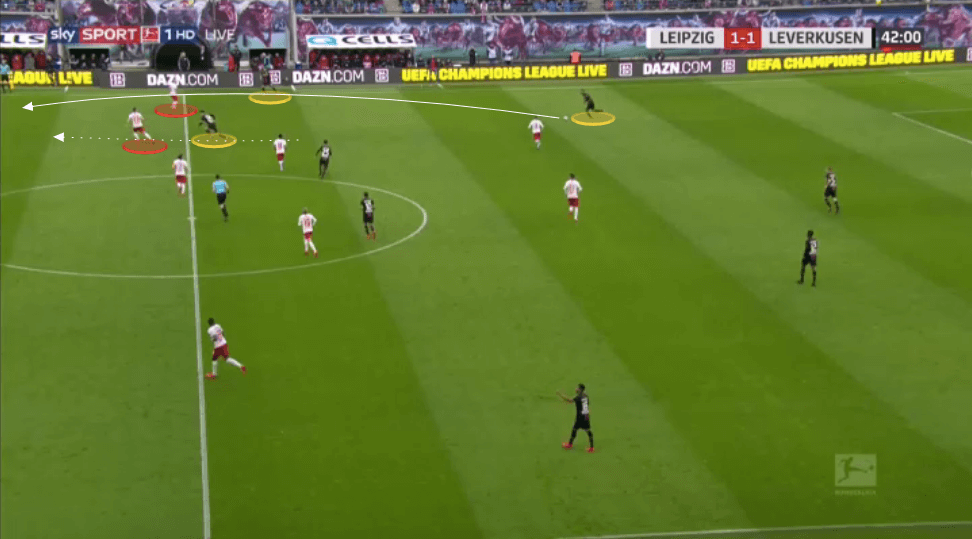 With Aránguiz’s introduction, Bosz pushed Demirbay a little further forward, however, he would still often drop deep along with Aránguiz and form a double pivot. By doing so they created plenty of space for Leverkusen’s back three to play directly into Lucas Alario. Both Demirbay and Aránguiz were then able to receive the ball facing the opposition goal, with plenty of space to drive into. 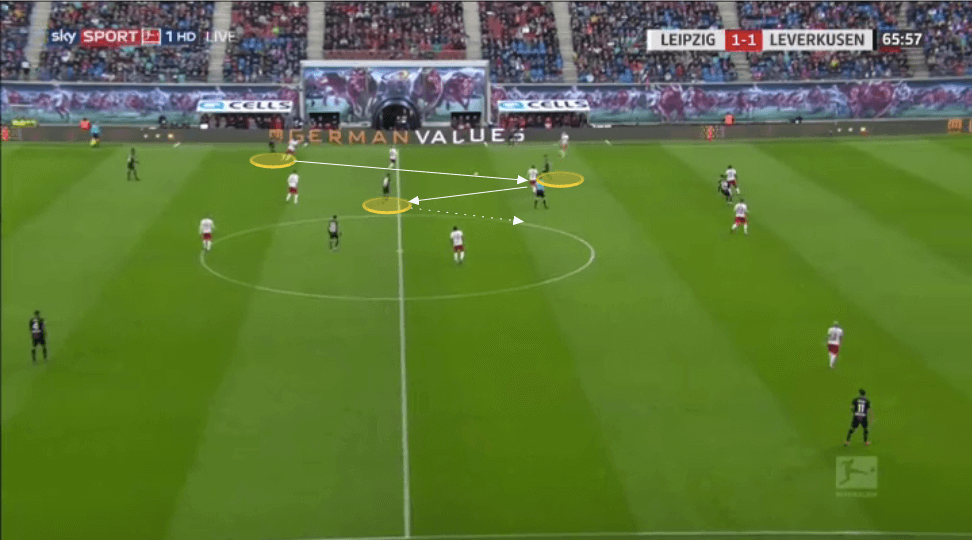 With three at the back, you are of course vulnerable on transition, and Leverkusen capitalized from such a situation. I was particularly impressed, however, with Bailey’s decision making to drop deep for the cut-back. With Leverkusen winning possession and attacking quickly, Leipzig’s back three scrambled to drop back as quickly as possible, and with Alario running towards goal they naturally dropped as far back as possible. With this quick break, it created a lot of space between the defence and midfield, and it showed an excellent understanding of this by Bailey to drop deep to receive the cut-back from Havertz rather than to head for the back-post in an area where any pass could have been cut out. 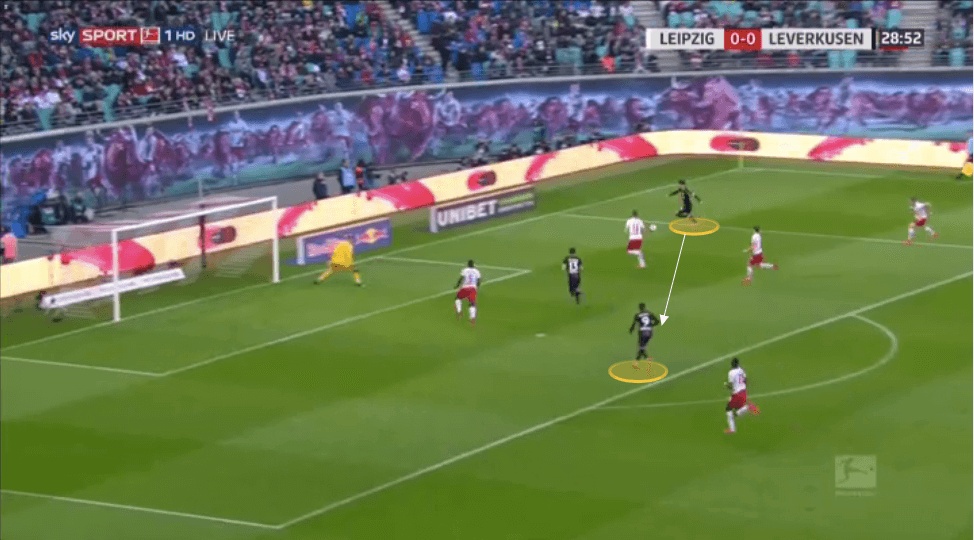 Havertz begins to show what he’s capable of

Havertz showed just why he is one of the most prodigiously talented young players not just in the Bundesliga, but in European football. He had a slow start to this season but has begun to once again show why he is so highly regarded.

Taking the captain’s armband again following Thursday’s Europa League fixture, he put on a mature display of intelligent attacking football, with an 87% pass completion on the day, three shot assists, and providing the pass for Bailey’s goal as mentioned above.

Although he lined up on the right side of the front three, Havertz drifted across the frontline with relative freedom, whilst often occupying the space between defence and midfield, making himself difficult to mark. 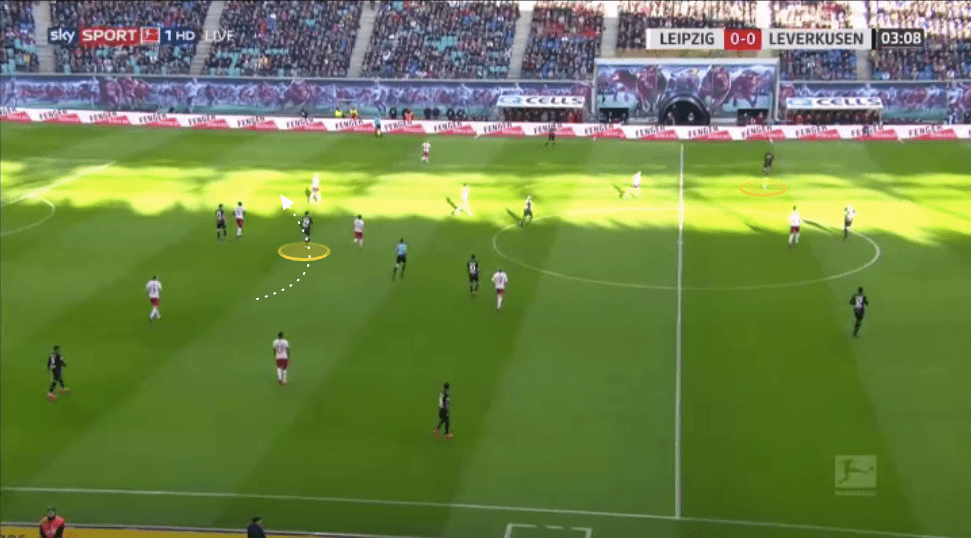 He is so composed on the ball and has an excellent awareness of where defenders are and where his teammates are.

Due to the threat he poses, once in possession, it is rare to see the opposition allow him to isolate defenders, and Leipzig were no exception to this, looking to quickly double, or even triple up on him, as we can see in the image below.

It is in these situations where Havertz’s positional awareness is highlighted, drawing three players towards him and being able to slide a teammate in support through, without the slightest hint of a glance. 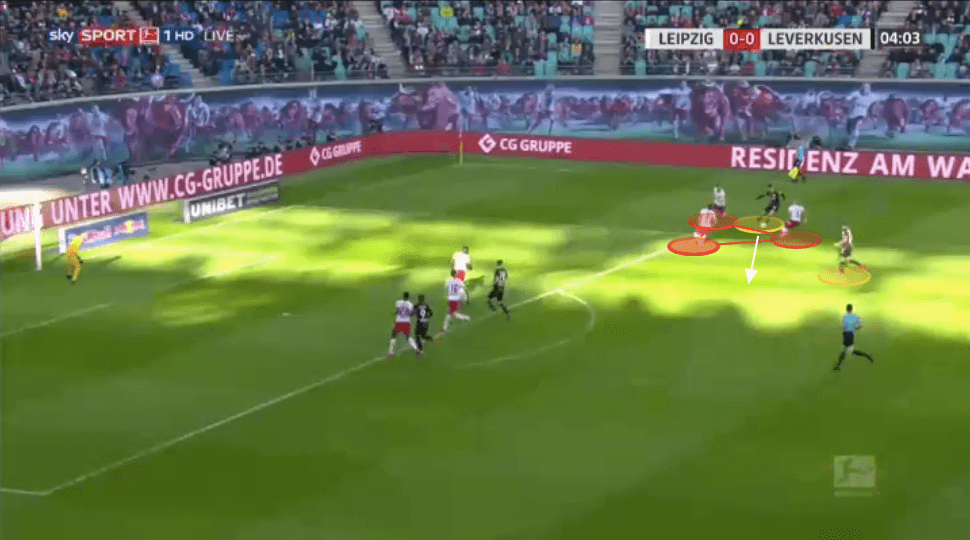 Leipzig looked to create space for Werner to attack

As was expected Werner looked to drop out to the left side in attack, something he has had particular success with this season. But it was a blunt attacking performance from Leipzig with them hitting the target just twice from eight attempts and finishing with a below-par 0.5 xG.

The pass-map below is particularly interesting, showing that Werner was Leipzig’s most advanced player whilst also showing just far wide he played. We can also see how Patrik Schick (21) dropped close to both Sabitzer and Forsberg. But the most interesting trend below is Nkunku and Angeliño’s positioning. The pass-map below doesn’t just show their most frequent pass-links as a side but also shows the average positioning of individual players. On paper, Nkunku was a central-midfielder but throughout the game, he would shift to the left-flank and team up with Angeliño and Werner. 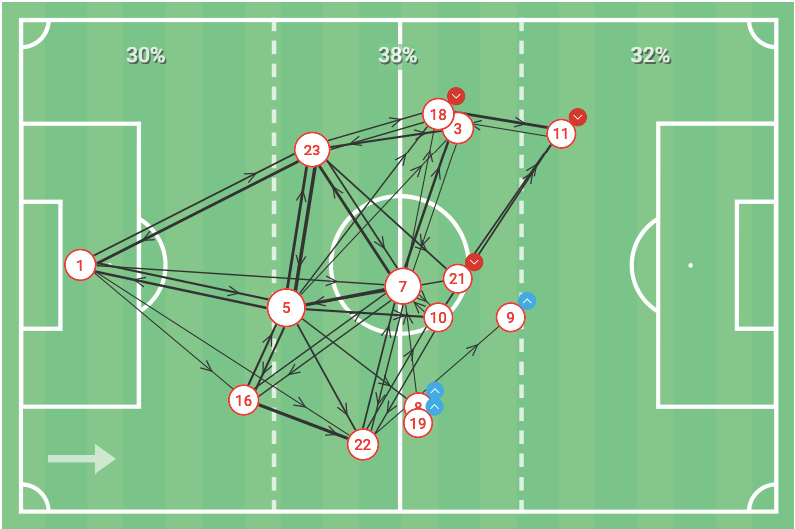 Together they would look to create numerical overloads on the left-flank, aiming to pin back Amiri and Tah whilst exploiting the space created from the 3v2 match-up as we can see in the image below. 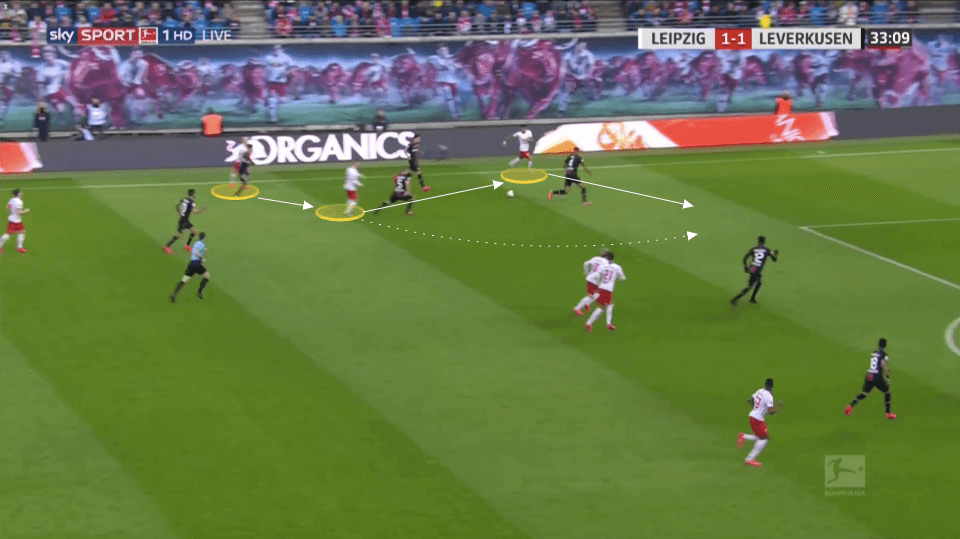 Nordi Mukiele was also important in allowing Werner to drop out to the wide left, whilst ensuring symmetry in Leipzig’s attacking shape. We can see in the image below that he pushes high to give Leipzig a front three and keep Leverkusen aware of the threat of a switch of play. Below Shick is still the defensive focus of Leverkusen’s back three, meaning Werner could isolate Amiri. 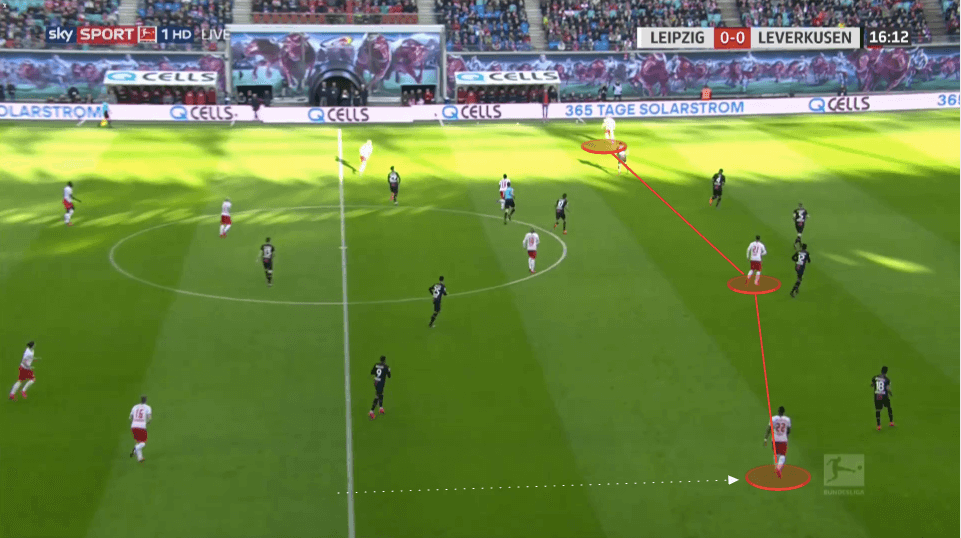 WIth Werner dropping wide, and as mentioned earlier, Schick also dropping deeper, Forsberg would push forward out of central-midfield on the break, ensuring there was still a central threat from Leipzig, regardless of how obvious Leipzig’s focus of their attacks was. 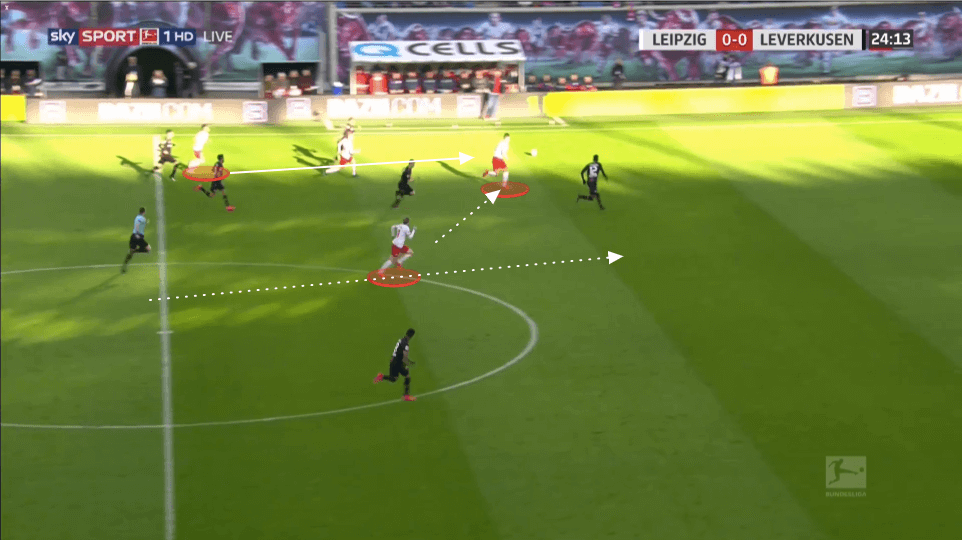 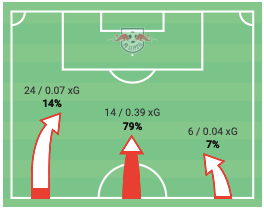 If fans were hoping for a top of the table blockbuster they will have come away from this game feeling a little disappointed. Leipzig were particularly substandard going forward and seemed to lack a certain spark in attack, which makes the decision to leave Dani Olmo on the bench for the full 90 minutes a little surprising. Leipzig are now three points behind leaders Bayern and will hope their rivals slip up somewhere.

Although Leipzig have to play Borussia Dortmund still in the run in, Bayern also have Dortmund, whilst Leverkusen and Borussia Mönchengladbach are also remaining fixtures.

Leverkusen would probably have been very satisfied had you offered them a point from this game before kick-off, yet will go away feeling hard done by. They hit the target six times from 14 attempts throughout the game and finished with an xG of 1.45. There were chances to win this game and Bosz will be disheartened that they missed a chance to move level on points with Mönchengladbach.